BATTLE OF COWPENS REFIGHT THIS EVENING 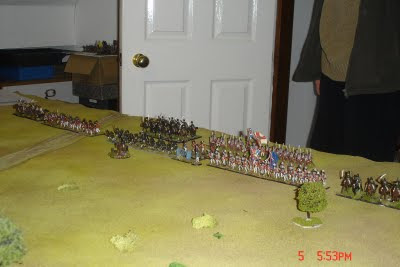 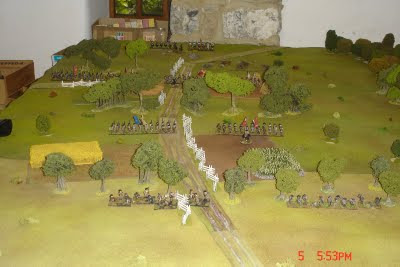 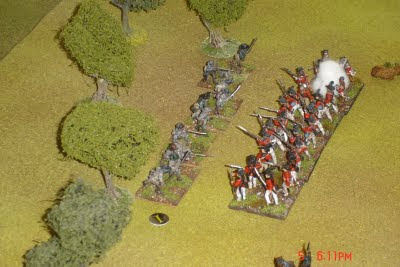 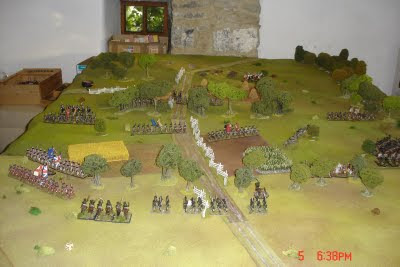 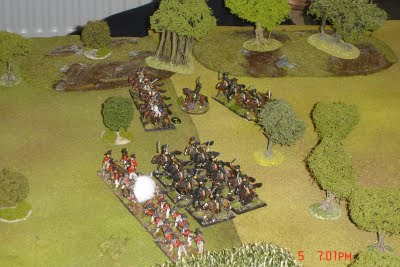 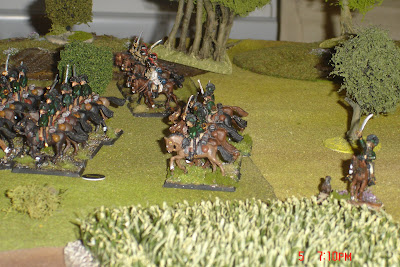 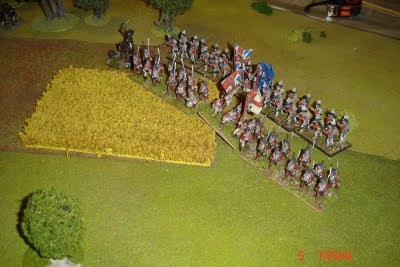 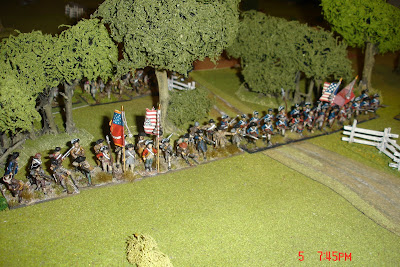 Having finally finished my British Legion infantry I decided to refight Cowpens. John came up this evening and we had a very enjoyable couple of hours. John was the British and I took command of the Rebels/Patriots (delete as applicable). We used Black Powder and it was quite easy to customise the armies using the special characterisitics contained in the rules. The Patriot militia was rated a wavering and/or unreliable but the Continentals were obviously much better. The British regulars (not the 7th though) got first fire, crack, steady and ferocious charge. The 7th were made up recruits apparently so were not quite as sharpe as their chums in the Light Btn or the 71st. John's biggest problem was likely to be the fact that he had only a single commander (Tarleton), and while he had a command rating of 9 he was also classed as 'independent' which meant he could blunder on an 11 or 12. The terrain was a bit sparse for my liking so I busied it up with the odd fence and field to break it up, although the only features that had any effect on movement and visibility were the main wooded areas.

The armies were deployed as per the real battle and the British had the first move. They pushed quickly right up to the Patriot skirmish line while the 17th Light Dragoons swept down the right hand side of table having got 3 moves from their die roll. In a brief exchange of fire my skirmishers were driven back and one unit was destroyed. The Patriot second line was stuck as they had a crap brigadier but even the third line wouldn't budge as I threw some rubbish dice. My cavalry did manage to move up a little bit which was to prove very handy later.

John moved the separate troop of Legion cavalry to join the rest of his mounted troops and pushed all his cavalry down the right. The push is coming here I thought! Meanwhile the 7th and 71st Foot (Feet?) moved around the woods to the left. The Light Btn and the Legion infantry passed through the trees although the latter were stuck there for a couple of moves due to poor command rolls and gun remained where it was for the entire game. It was now John found that having just the one commander was a bit of a bitch (although this probably reflected the real battle correctly) as he was getting very overextended and bogged down. Even so, I was getting a bit anxious as unit for unit the Brits were much better than mine.
What followed was a very exciting few turns. My second unit of riflemen eventually ran away, but a stalwart militia unit held off the 7th Foot for long enough for me to get the Continentals up and into the firing line. The remaining unit from the second line managed to retire back to the tree line and held off the Light battalion. (The militia in the first and second lines were pants on paper but I threw some excellent saving throws and enough sixes to disorder the British). The 7th were put under heavy fire and became repeatedly disordered and shaken. Because Tarleton was on the other flank not much could be done to rally them. Luckily for John the 71st were able to pass through them and give them some respite.

On the other flank my Virginia militia held off the British cavalry for a while, and even drove them off when charged - twice! Very lucky! What then followed was a see-saw fight of charge, counter charge and general mayhem as my militia held off the British Legion cavalry and my Continental dragoons eventually destroyed the 17th Lt Dragoons and the large Legion cavalry unit! The Virginia militia turned and enfiladed the Light Btn which sensibly failed a morale test and withdrew to the safety of the remains of the British force.

Time overtook us, but it was agreed that we had an American victory. It was quite a close battle for all that though. The British had not made any headway against the Patriot lines, were in danger of becoming overextended and out of command, were outnumbered, and had lost 2 units of cavalry. Two more units lost and the British would have broken. Overall a great game and proof once again that Black Powder work very well for this period.
By Colin Ashton - May 18, 2011 1 comment: