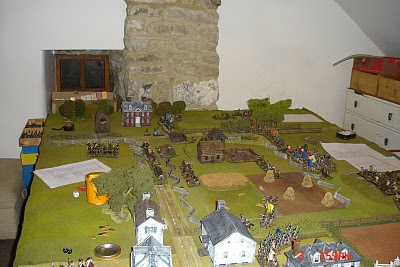 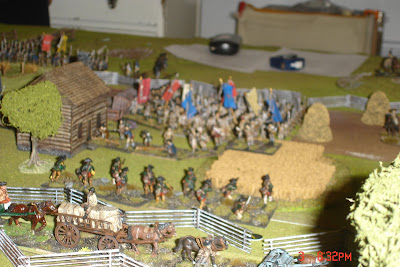 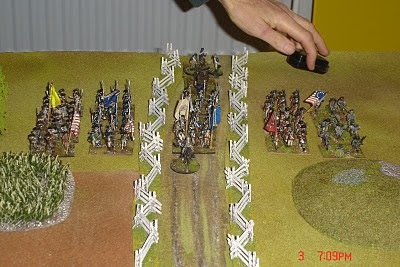 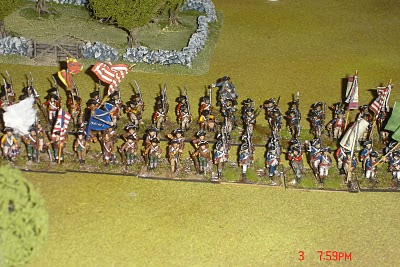 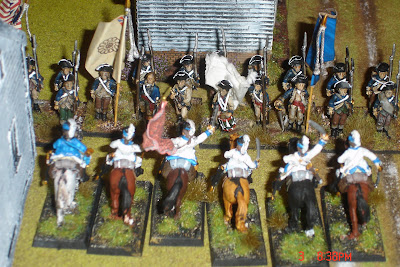 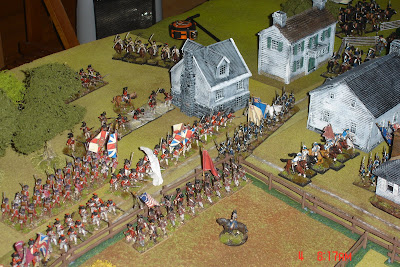 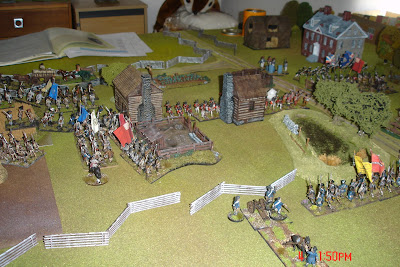 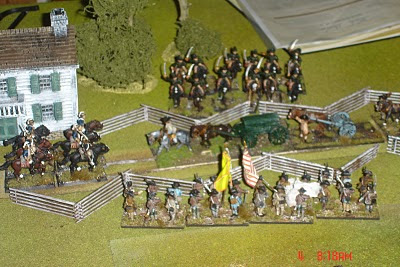 My back was much better yesterday so we arranged to play a game at John's John had set up a scenario from Under the Lilly Banners, set in Ireland during William III's campaign against King James II's forces. Rob played the Williamites/Protestants while I took command of a small greatly outnumbered force from King James' army, guarding a river crossing, with the aim of buying enough time to allow for the transfer of artillery and baggage across the river by raft. Both armies were provided by John - 15mm, mainly Irregular miniatures. 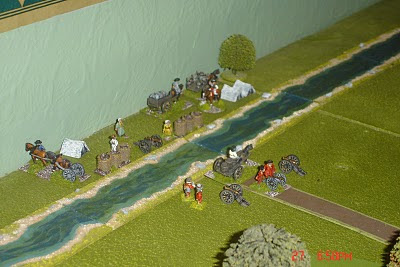 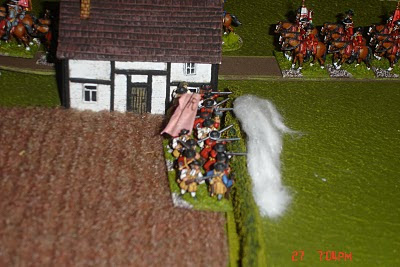 Most of the Jacobite forces were hidden, but one battalion of Irish levy infantry were deployed in and around a farm in the hope of delaying the Williamite advance or at least distracting them slihgtly. It didn't work as the entire Williamite cavalry force of about 12 squadrons just rode past and ignored them, even when one unit suffered severe casualties and was forced to withdraw. 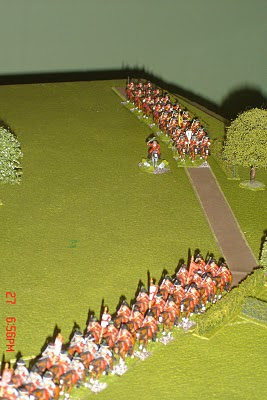 As the Williamite horse neared the river, two squadrons of Irish horse emerged from behind the woods and very shortly a fierce cavalry battle began which was to last for the remainder of the game. 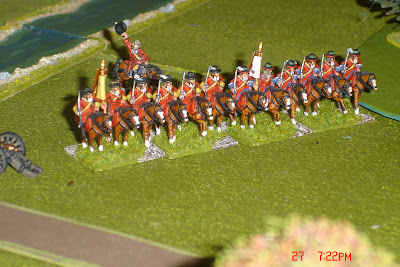 In the meantime, a great column of English and allied infantry was marching towards the river. Once these boys got into action it would be over very quickly, so it was fortunate that the transfer of guns and baggage across the river was proceding quite quickly, although one gun was retained as part of the rearguard. Sadly it was ridden over by English horse before it could have any effect. This did leave the English horse exposed to a flank attack by a further squadron of Irish horse which eventually managed to rout them. 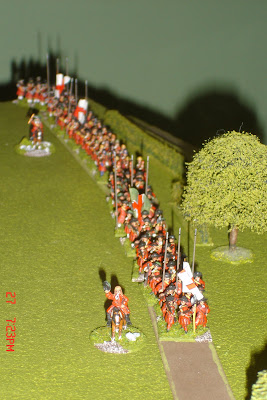 Meanwhile my brigade of Irish foot emerged from the wood and drove off a further uit of English horse. As the cavalry battle came to a close, both sides had practically wiped each other out. Three out of four of the Irish horse squadrons were destroyed while the majority of the English horse and dragoons were either destroyed or spent. 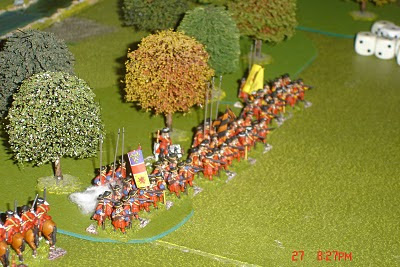 The battle came to a close with my Irish infantry withdrawing back through the woods in the face of massive numbers of English foot bearing down on them. On the left, English dragoons had worked their way through the woods and my dismounted dragoons, while succesfully holding back two English battalions were in danger of being trapped and overwhelmed. The unit in the farm area was trading fire with an English battalion and holding out quite nicely. Darkness fell with the majority of my guns and baggae across the river so an Irish victory was declared, although in truth had the game gone in for a few more moves I would have been pinned against the river and destroyed by superior numbers.
So, a good game, a challenging scenario for both sides, using a set of simple and easy to play rules that from what little I know (and I wasn't there in real life) had a period feel to them.
Next week (hopefully) back to the American War of Independence/Revolution. 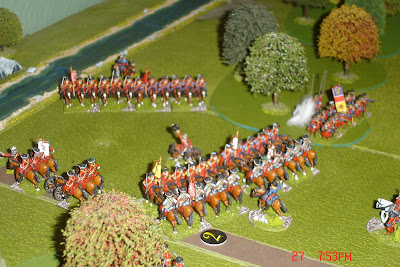 More Continentals, Hessians and other stuff 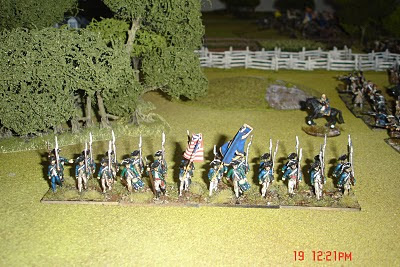 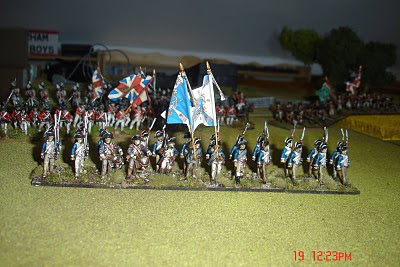 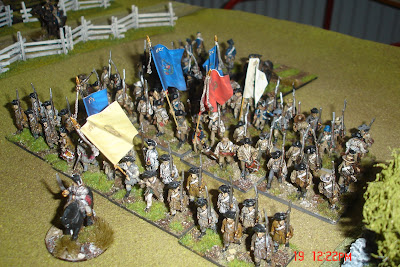 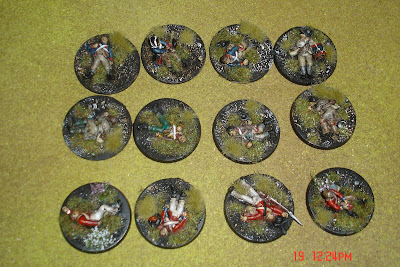 Well, no game last week or this as I have put my back out again. Certainly no chance of me being able to bend forward over the table for a while yet (stop sniggering you smutty people!). Sitting down for prolonged periods is also painful (I said stop sniggering!) but I have managed to finish a few units over the last two or three weeks, so with my senses dulled by some lovely opiates and a week of daytime TV, here are some pictures.

The figures in the top photo are the new ones I picked ip from Old Glory at York. They paint up very nicely and although quite delicate fit in with my Perry stuff quite well. Second are my Hessian von Bose regiment. Perry figures. Very nice. I also completed two southern militia regiments (the rear ones) so now have a nice North Carolina militia brigade of three batallions. Finally, some dead and wounded. I liked Der Alt Fritz's idea of using them to mark where stands of figures were removed and casualties used to depict the flow of battle. Not sure the budget can run to many more though!
Time for another Tramodol............
By Colin Ashton - March 02, 2011 No comments: