A right old hodgepodge of stuff left the painting desk this week. After a bit of a hiatus in the weeks leading up to Christmas I managed to get these figures finished and saw them march off to their barracks (boxes).

Moving back in time 74 years we have some 1866 Hanoverians that have been on the painting desk for maybe two years! The rest of the army is long finished but as yet unbloodied.
I think my painting and gaming mojo is re-emerging after my period of pre-Christmas illness and general advanced decrepitude. Onwards and upwards as they say………..
By Colin Ashton - December 30, 2022 4 comments:

More gallant French for my France 1940 collection in the shape of a rather understrength Group de Reconnaissance. We have one squadron of motorcyclists (with dismounts) and one of obsolete underpowered, undergunned and unreliable Schneider Kegresse P16 armoured half tracks. 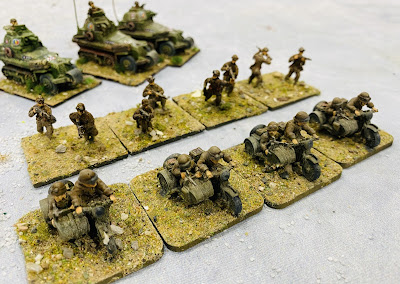 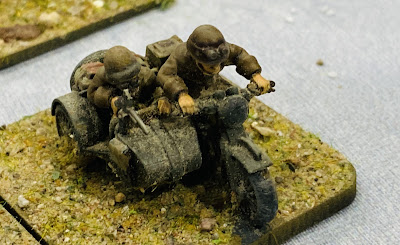 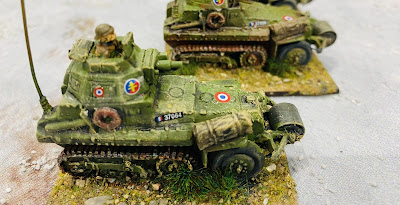 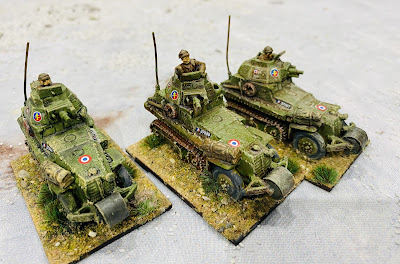 I thought I’d leave the P16 in plain green as they’ll have been hauled out of retirement and issued to a few unlucky recce  units. All were lost during the short campaign. The models are from Early War Miniatures and are tremendous imho. The motorcycle combos are resin 3d prints and the dismounts are from CP Models. 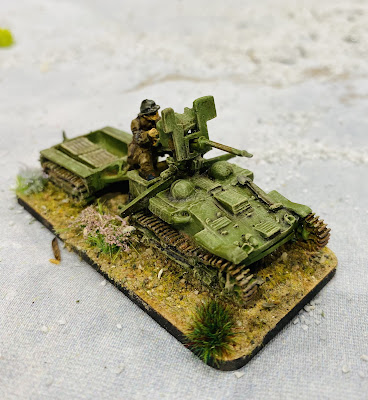 The last picture is of a bit of an oddity but an amusing concept;  a 25mm AT gun mounted on the back of a Lorraine37L Chenillette tractor. This is also from Early War Miniatures. 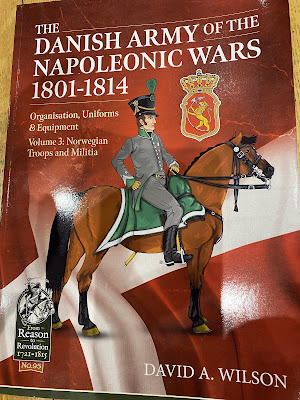 My long wait for this book has finally come to an end. This third and final volume describing the Danish army of the Napoleonic Wars 1801-1814 by David Wilson, part of Helion’s from Reason to Revolution 1721-1815 series, continues with the same high level of detail as in the earlier volumes, and presents for us this time the uniforms, organisation and equipment of Norwegian troops and militia, Norway at that time being an integral part of the Danish monarchy, albeit as the poor relation of the partnership. The army was to be tested fighting against he Swedes, where it handled itself well.

This volume follows the same format as the previous ones, and after a brief introduction launches straight in to chapters on each of the different types of cavalry in the army; the high command and military school, line infantry, jägers, ski troops, artillery, colours and guidons, and an almost bewildering but clearly explained host of different classes of militia and coastal defence forces. I found these chapters on the Landevaern, volunteer jaeger and the citizen militias to be particularly interesting and enlightening.

As with Volumes 1 and 2 the book is very well laid out and a pleasant read, packed full of original artwork by the author, with 62 vibrant colour plates, depicting the uniforms and equipment of every regiment and troop type. There are also depictions of the flags and of many of the range of cannon available to the Norwegian armed forces.

The appendices provide supplementary information on  Norwegian cavalry, their horses, and there are also a couple of orders of battle and handy glossary.

This is an excellent book and the entire three volume series has clearly been a labour of love.

New Additions to the French for 1940

Despite being poleaxed with an ear infection, flu and a badly strained groin on top of my usual woes I’ve not been wholly idle.

I doubt I’ll get a game in before Xmas even if I could stand up. I hope to finish some more bits and bobs over the holidays, do a couple of books reviews and even tidy the Man Cave in readiness for the 2023 campaign season. Speaking of which I will be running a campaign for the chaps to start in Feb/March. More on this later.

What with everything that’s been going on at home I’ve not been able to do a calendar for 2023 and Christmas cards are off the agenda this year as time has run out.  Merry Christmas to one and all and normal service will be restored shortly……I hope!

The Italian Wars volume 4 - the Battle of Ceresole 1544 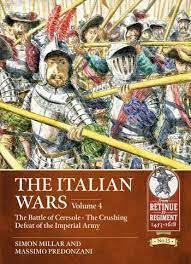 What an excellent book, following in the footsteps of the previous three equally superb volumes. ‘The Italian Wars Volume 4, the Battle of Ceresole 1544, The Crushing Defeat of the Imperial Army’ by Massimo Predonzani and Simon Millar is the 15th book in the ‘from Retinue to Regiment’ series.

The book picks up from the end of volume three and the Battle of Pavia, and in the same style as used so well previously we have among other things chapters on the commanders of both sides, the armies of all the main protagonists and their composition, thoughts on the different types and roles of ‘heavy’ and ‘light’ cavalry, a discussion on the ‘enfants perdu’ and the rise of the arquebus in the Spanish army. Heraldry has always been a major focus of this series of books and this is no different with one chapter focusing on that of one of the key commanders.

The authors provide us with a detailed analysis of the campaign leading up to the fateful battle and the initial skirmishing before giving a blow by blow account of the battle and the outcome, including the not insubstantial losses especially among the defeated Imperial troops.  The account of the battle is undoubtedly the best I have read and the level of detail is impressive, which is something I have come to expect.

The maps, both the theatre ones and those of the battle are great and the latter very well detailed. Those of the battle are going to be really useful for wargame enthusiasts. Many of the black and white illustrations are contemporary prints while others are of arms and armour. The obligatory centre spread of colour plates is gorgeous and the images themselves full of life and vibrant colour. Various different troop types and numerous colours and banners are covered, each with a handy explanatory paragraph. The colour plates are all by the talented Massimo Predonzani.

It’s actually quite a small book with just over 100 pages and about 45,000 words but good things often come in small packages. Anyone interested in the volatile period of the Italian Wars will covet and want this book, a worthy addition to the Helion catalogue,. 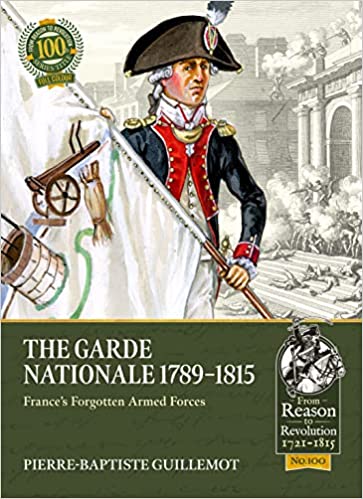 As a wargamer with more than a passing interest in the French Revolution I was very excited to see that this new publication in Helion’s from Reason to Revolution series land on my doorstep with a big thump as it is quite a weighty tome, coming in at 362 pages.

The Garde National 1789-1815, Frances’s Forgotten Armed Forces, by Pierre-Baptiste Guillemot is absolutely stunning, which quite rightly befits what is book number 100 in the series. It is the first such work published in English, and the author has drawn on a wide range of sources and often previously little-used archive materials. My understanding of the organisation and role of the Garde was limited but this tremendous book discusses the organisation, uniforms, roles and many subsequent reorganisations in detail as it evolved into one of the most important tools of the Revolution and ultimately the Empire, in both in Paris and across the country. Initially an internal security force the Garde soon saw action in the frantic battles defending Frances’s frontiers during the many incursions by Coalition forces right up to the fall of Napoleon. They were also involved in the unsavoury and brutal war against the Vendean and Chouan rebels in Western France.

The author takes us on a journey through the history of the Garde, it’s initial creation in Paris, followed by similar initiatives in the provinces, through the early years of the Revolution, the Consulate and the Empire. The attention to detail and the sheer amount of information is inspiring; even more inspiring are the vast array of colour and black and white illustrations. Unusually but also wonderful is the fact that there are TWO large sections of colour illustrations. Many of the these (for example in the first colour plate section) are contemporary images but the  entire second section of colour plates illustrating uniforms from throughout the period were commissioned from renowned artist Patrice Courcelle. There are further colour illustrations dotted liberally throughout the book, as well as a colourful section on the flags borne by the Garde.

This remarkable book is a must for anybody with an interest in the French Revolution and role of the Garde National during its lifetime. I learnt a great deal and the book is a worthy addition to my library.

Today in the 265th anniversary of this iconic battle. As has become a bit of a tradition I hosted another annual refight of Leuthen on Saturday. What again? Yes again. We used Paul’s Panoply of War rules for the first time in this scenario; Black Powder and Honours of War used exclusively in the past so time for a change. 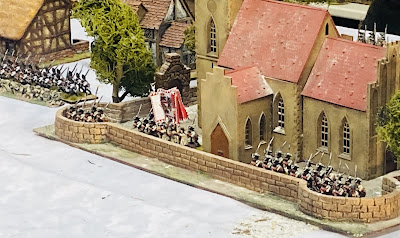 This version of the battle is the one put forward in Charles S Grant’s excellent Wargaming in History volume, so it focuses on the final assault on Leuthen and the turning of the Austrian left wing. It is very hard for the Prussians to win a decisive victory, something they have only ever managed once in a dozen games although they have snatched a few marginal victories, but the Austrians are leading the scoreboard with seven wins. Dave, as is also a tradition if he's playing, was Frederick, supported by Richard (Dessau) and me (Zeithen) in a rare appearance on the tabletop. Conrad was Charles of Lorraine in command of the Austrians until Marshall von Daun arrives hot foot from the north, supported by Paul (Colloredo) and John (Lucchesi). 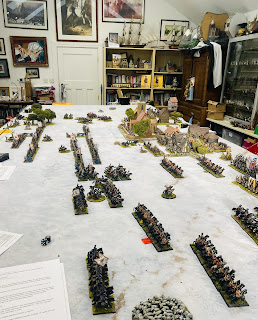 We had to stop at that point after a good day's gaming. The game was technically inconclusive but at best it was another Austrian success in foiling Frederick's plans. It was a really enjoyable and fun game, right up to the point when all my troops were running away. There's always next year.......!