A Trip to the Club. Peninsular War with General d’Armee

John and I parachuted into a Napoleonic Peninsular War game at the Durham Wargames Group last night as two of the British commanders were unable to be there. The British were hard pressed, with their right wing under assault by half the French army, and their left had suffered a reverse when a regiment of KGL Light Dragoons were driven off the table. Conrad was already in command of the right so John had the centre and I took the left. Shaun and Nigel were the French. The gorgeously painted figures are all from Shaun's collection.

We had to stop then as it was time almost 10pm but the game will continue next week.  It’s good to see GdA being given a run out at the Club. They’re certainly now the go to set of rules of choice for my French Revolutionary Wars games instead of Black Powder. I would probably still use the latter in one of my big multi-player FRW games where players were unfamiliar with GdA as BP are maybe easier to get into. GdA require a great deal more cerebral activity (in a good way) to get the most of the game, especially given the many nuances of the ADC command tasking.

Once the dust had settled on Saturday's game I thought it might be interesting to play a few more turns solo before clearing away the troops.
I quickly rolled for the two French faltering brigades. The one that had been to the left of Novi had been forced to retreat off the table and was lost. The one in and to the right of Novi threw a 1 in its Faltering test and so it was every man for himself! They too disappeared off the table!

It is always interesting how just a couple more turns can have such a difference on the outcome, as we now had a resounding Coalition victory.

Great stuff and now to put everything away.
By Colin Ashton - January 27, 2020 7 comments:

On Saturday I hosted another large French Revolutionary Wars game, this time set in Northern Italy in 1799. It was based on the Battle of Novi, a major French defeat at the hands of the great Field Marshall Alexander Suvorov, which saw them almost expelled from Italy. The actual battle was a massive sprawling and bloody affair, so the game was heavily bath-tubbed and as a result only bore a passing resemblance to the real thing, but that doesn't bother me really for a game at home. A full account of the actual battle can be found here. It’s been ages since my 1799 Russians have been on the table so that was as good a reason as any for the game, pitching an Austrian-Russian  army under Suvorov against  French force under General Barthelemy Catherine Joubert.
I also wanted to introduce a different army, the Russians, into our General d’Armee learning process. The key to success in GdA, apart from throwing the right scores on dice, is the ADC tasking phase. Understanding what can or can’t be done under each of the ‘taskings’ is critical and intuitive, and creates plenty of fascinating/annoying challenges. Anyway, on to the game.

John the Red and Mike were the French, while Paul, Conrad and Neil took the Coalition forces, under Paul’s command as Suvorov. I umpired (no mean feat given I’m only a step or two ahead of the others in learning the rules), so in the time honoured manner I will attempt to get the following photos to describe the course of events as the game unfolded.


So that was it. The French had won a tactical victory but had failed in their objective of weakening the Coalition forces sufficiently to enable them to escape the noose that had been closing around them. The Coalition forces had prevented the French escape but the latter were still very much a force to contend with. I know how I would have played it, but its easy to say that in hindsight, so shall keep my own counsel.

It was a great game and everyone expressed their enjoyment, which is always good.  The rules also got largely positive feedback, which is also good as I intend to use them as my rules of choice for the FRW until/unless something better comes along. There are some things we/I still got wrong but we are on a learning curve of ill-defined and flexible curviness so onwards and upwards till the next time.

Vapnatark in York next Sunday, which is always a good show and a good day out where I will no doubt buy more stuff I didn't know I needed and talk soldiers all day.
By Colin Ashton - January 26, 2020 8 comments:

Prompted by the next big game at the Burrow I photographed my now complete Polish Legion now they’re at full strength.

It’s taken a while and many a distraction but I’ve now completed my Polish Legion, part of the French Army of Italy in 1799 (although similar formations also existed earlier, and in other theatres of war).    My mate Rob of Northumbrian Painting Services painted all three battalions, plus the gunners, while I contented myself with the basing. The first battalion was painted maybe two years ago and the last one was completed a couple of weeks ago.


I’ve brigaded them with my Lombard Legion (also painted by Rob) although when the Lombards are at full strength (one more battalion, two more cannon to complete the battery and half a dozen more Hussars) they’ll both be properly ‘Legion’ in strength and composition. Sounds all a bit OCD to me but they’re my toys, so......

With the exception of the Uhlans which are Elite Miniatures, all the other castings are from Trent. The flags (with the exception of two Lombard flags off The Flag Dude) are either off the internet or from my friend Franco.
By Colin Ashton - January 25, 2020 12 comments: 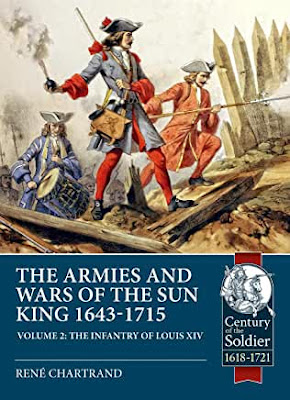 This is the 50th publication in Helion's Century of the Soldier series and what a cracker it is too! Volume 2 of René Chartrand's 'Armies and Wars of the Sun King 1643-1715' celebrates the series' half century focusing on the infantry of Louis XIV. The book follows the usual format we've come to expect from Helion. Not a great deal is known about the French army of this period or of the campaigns it waged and having it pretty much all in one place is a definite bonus. The first six chapters give us quite a detailed run through the French involvement in the wars of the period which I found especially interesting as it includes the expedition to Sicilly in the mid-1670's, which I knew nothing about, and the influence of the Ottoman Empire on Eastern Europe in shaping French policy in the West. We then get more, with chapters covering, amongst other things, the business of war, the structure of the infantry regiment (be it native French or Foreign), recruitment, weapons, uniforms, colours and tactics. The book is lavishly illustrated, with almost 200 black and white contemporary illustrations and maps/diagrams, and there are 32 pages of colour plates. These include eight glorious pages of specially commissioned illustrations covering uniforms and colours, and a further 24 pages of other colour plates of uniforms and colours drawn or reconstructed from other sources.

This book is well written, easy to follow, wonderfully illustrated, and a fascinating and informative read. Very little is known about the French army of the 1670's but M. Chartrand has gone a long way towards filling the gaps. As you can tell, I liked it. Highly recommended, even if it means I shall be adding to my 1670's French!
By Colin Ashton - January 24, 2020 6 comments: