John the Red, Paul S, and Conrad joined me for our second game in just over a week, the follow up to the previous encounter between the Venetian-led army and their foes the Ottomans. The scenario is fictitious set between the end of the 5th and start of the 6th Ottoman-Venetian wars of the mid-late 17thC. I'd managed to rebased most of the Ottoman infantry and restructure the army, giving them a few more units as a result, but as it turns out they were going to need them! Paul and I were the 'Allies' while John joined Conrad with the Ottomans. I've already set the scene for the game in a previous post so suffice to say the Turks must crush the infidels while Paul and I had not only to beat them off but win a decisive victory in the process. Easy.....? No, especially when after some disappointing dice rolling most of our regiments ended up carrying at least one casualty over from the  previous battle.

Without further ado, we shall be begin. Lots of pictures which I trust will explain the sequence of events well enough.

As it turns out we had to call it a day at that point. With the Janissaries broken the Ottoman commanders agreed that it would be wise to pull back, especially as so many of the remaining brigades were close to break point. Only our cuirassiers on the right were out of action, although as noted above our other cavalry command were very close to breaking. But they didn't. The Venetian-led alliance had achieved its first objective handsomely in beating off the Ottoman attack. Their second objective of inflicting a crushing defeat on the enemy was almost achieved, but not quite. Ok the Ottomans had no decent infantry left and their surviving cavalry were well and truly battered, but we were very close to loosing all of our remaining cavalry. Our three infantry brigades were however still effective fighting forces despite their losses so while not a crushing Ottoman defeat nor really a decisive one it was still a victory of sufficient magnitude for the Venetians et al to regroup and have another try at getting through to the beleaguered Venetian garrison at Prebranac as the Ottomans would not be in a position to intervene in time to prevent its attempted relief. But thats another wargame.

Another excellent game. A sensible approach to the use of admittedly heavily-tinkered-with Pike and Shotte, and having a sensitive approach to playing the period and not the rules worked yet again providing an exciting and challenging game for us all. 'Wargamery stuff' and playing the rules is frowned upon in the Burrow and by everyone who attends on a regular basis.

The random event cards again provided several amusing and/or annoying moments during the game. Annoyance was the usual feeling when one forgot to play a card on the enemy that would have been a proverbial spanner in the works! I need to do some extras that are more directly relevant to the 17thC as quite a few of the current set are only really relevant to the French Revolutionary Wars.

Not sure when the next game will be, probably one day over the Easter weekend, but maybe sooner. We shall see.
By Colin Ashton - March 31, 2019 17 comments:


A better month this time as I've had a massive splurge on basing. I’m not going to get anything else done before the end of the month (tomorrow!!!!) so here’s my output as of this morning:

Basing (already painted, many like the Sikh Wars stuff, some time ago):

Make a start on basing my French for the War of Polish Succession as well as getting cracking on the last of the infantry, artillery and commanders.

All of the above are largely aspirational especially as we are away for almost a week, but to be able to tick a couple of them off the list would be worth a pat on the back and a generous gin and (slimline) tonic or two. 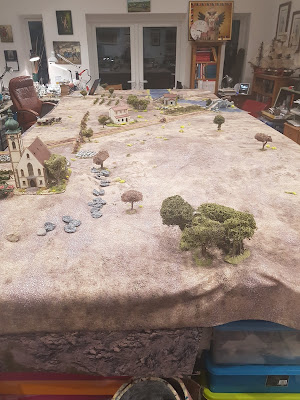 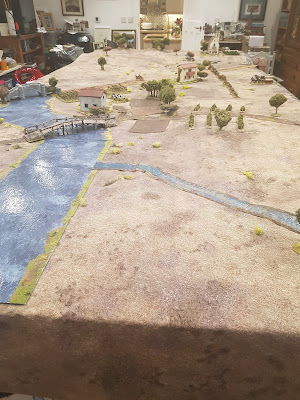 You have been reinforced, outnumber the enemy but do not have your artillery train as it could not keep up with your pursuit. You have a new commander as the former Governor is under tent arrest until he can be dealt with more appropriately. Sadly the only bow-armed troops in your army fled during the previous engagement so it has proved difficult to find any bows or bowstrings to carry out the likely sentence). You must now crush the infidel army.
[1]A noted Serbian dish of baked beans
[2]Big Fart in Croatian
[3]Patron saint of volcanic erruptions
[4]Grandma’s Ass – a real place name
[5]Bra - ditto
[6]Panties - ditto
[7]The patron saint of dysentery and earaches
By Colin Ashton - March 29, 2019 7 comments:

After the game last Friday I promised myself I would start rebasing and touching up my far from homogeneous (?) and uncared for Ottoman army. Each unit will eventually be based on a 180mm frontage which will then match my late 17thC European and Polish armies. Conveniently they will also fit my standard movement trays. One immediate net gain has been that I’ve also managed to increase the number of units, squeezing out and extra two Janissary and one Balkan infantry unit. Similarly, when I get round to them, I will also be able to increase the number of Spahi units, which is only a bad thing if you're the enemy.


There is another game planned on Saturday,  which will be a continuation of the scenario in which last week's Ottoman victory took place .
By Colin Ashton - March 28, 2019 5 comments:

Today’s offering are three elephant-drawn limbers for my Sikh artillerymen. I think the majority of cannon in both opposing armies would have been pulled by bullocks but there is something to be said for a couple of battles of the heaviest cannon being pulled along by these majestic beauties. Speaking of bullocks, of which I have a couple of dozen, unless I can acquire some more elephants (I am pretty sure I have another three somewhere in the lead mountain) I shall be giving all the remaining Sikh batteries and all of the HEIC batteries bar the Bengal Horse Artillery bullock teams. 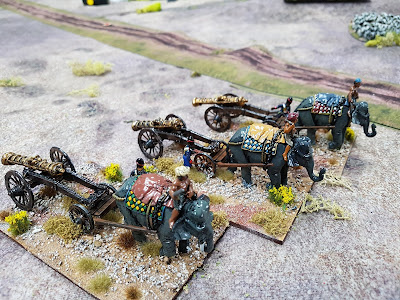 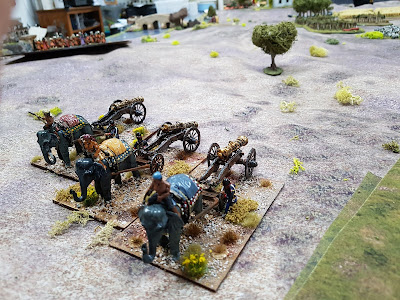 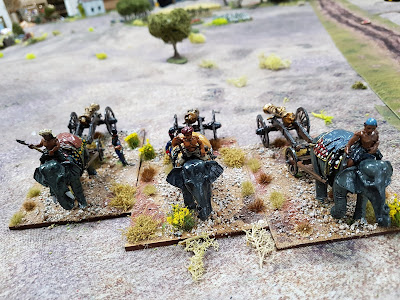 Another batch of finished units for my long-delayed Sikh Wars project. This time four rather large batteries of Sikh Artillery. Two are equipped with 6 or 9pdrs, while another has 12pdrs and the last some monstrously big and less modern cannon. 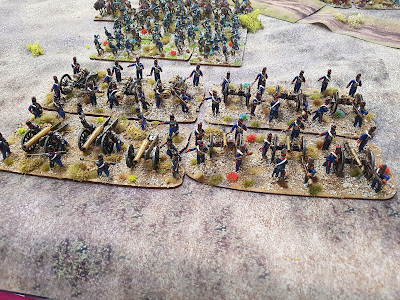 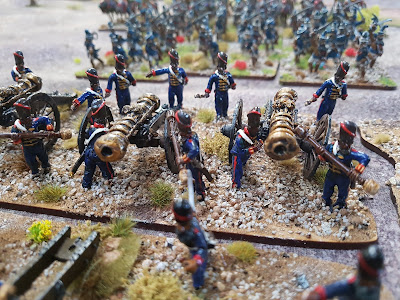 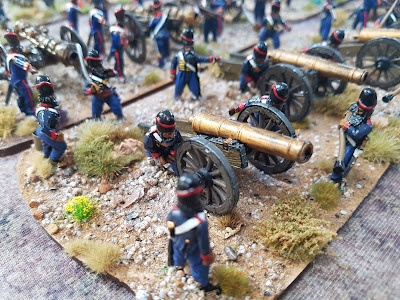 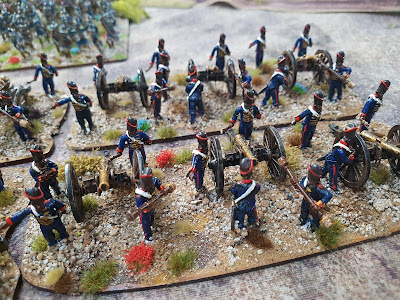 The gunners are either Studio Miniatures or Foundry. The guns are Studio, Foundry and AW Miniatures. My thinking behind the large bases was simply to ensure that in any future game the Sikh commander will have to mass his guns, and because I am coming round to using bigger bases. Also, I do quite like the effect, although they will no doubt scare whoever plays the British!
By Colin Ashton - March 25, 2019 4 comments: