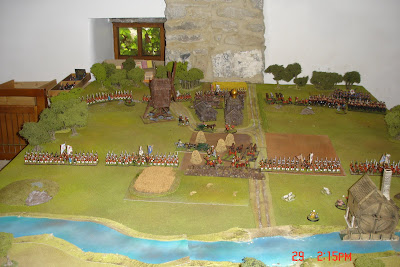 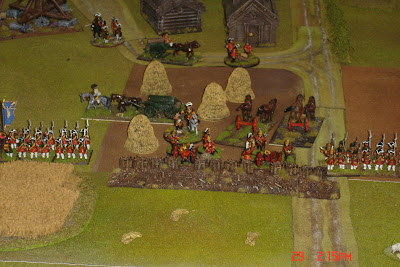 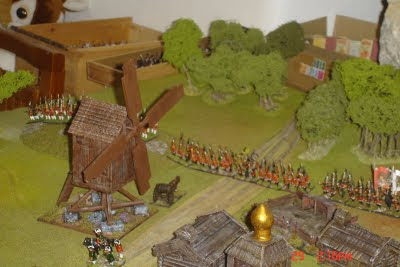 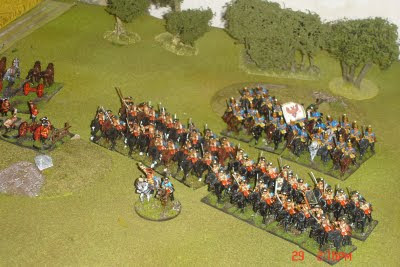 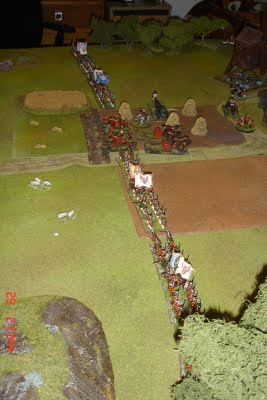 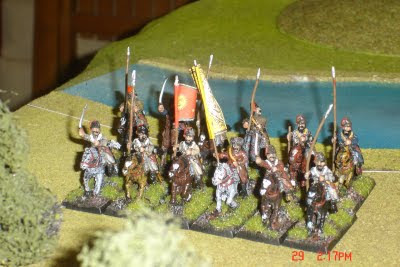 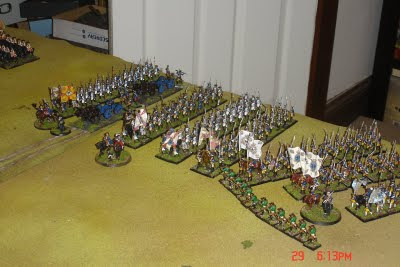 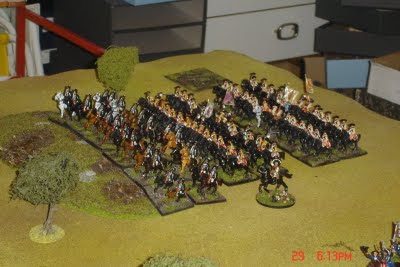 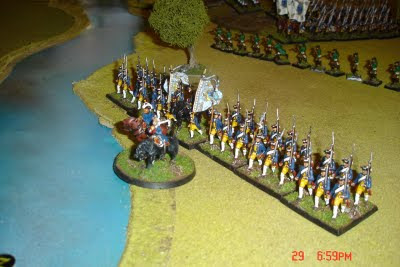 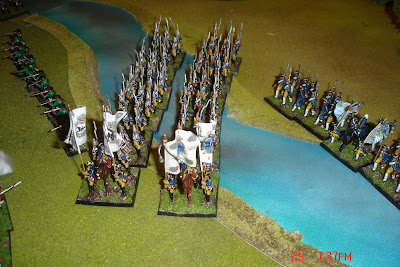 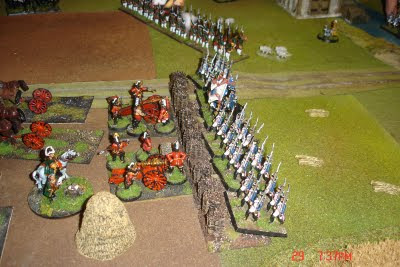 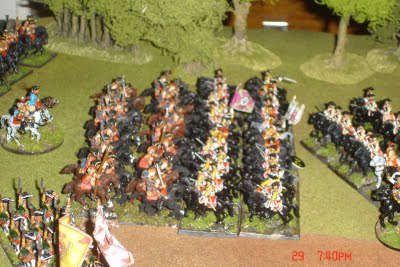 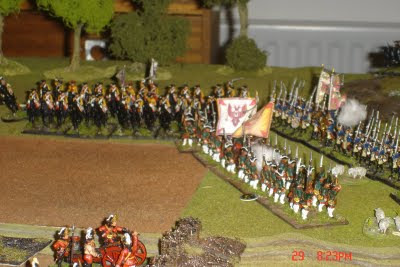 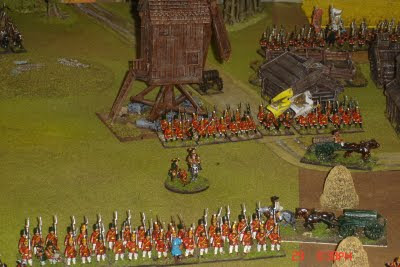 After a long break due to holidays, domestic unheavals, the builders and a new puppy I finally managed to get a game organised. I decided to try out the Last Arguement of Kings Black Powder supplement using my 28mm SYW Prussian and Russian forces. I started building the Prussian army in response to Rob's desire to start an 'old school' army a few years ago, and somehow a 'few' battalions turned into 12 36-man units of infantry, assorted Jager and Freikorps foot, 3 x 30-man regiments of Cuirassier (and another of 18), 1 x 24 man dragoon regiment and 1 of 12, and 2 Hussars regiments (1 of 36, the other 24 figures). Oh, and some Bosniak Lancers and Freikorps cavalry. The figures are almost all RSM, with some Minden and a very few Foundry. Then, I was at some show or other and Dave Thomas was selling off packs of Foundry Seven Years War Russians at 5 quid a go. All of a sudden I had the start of my Russians, filled out thanks to the odd Foundry sale to the point where I have 14 36-man battalions of infantry, dismounted dragoons, some Pandours, 2 regiments of cuirassiers and a regiment each of horse grenadiers and hussars(24 each) plus a small (12) unit of dragoons. Lots of guns too :o)

So, getting back to this report, John came up last night and we tried out the rules. The Russians were holding a river crossing and a town to its rear which they were in the process of looting. (Even though it looks like a Russian town!). They were deployed in three lines. Lighter troops over the Prussian side of the river with a second line just outside the town bolstered by a battery of heavy guns dug in behind earthworks. To the rear of the town was the reserve infantry brigade of elite grenadiers, a heavy gun battery and a cavalry brigade of cuirassiers and horse grenadiers. The Russian commanders were pretty poor - only the second line brigadier was an 8, and the C-in-C was a 7 (the other two were 6's) but I made the infantrry pretty tough. we used the characteristics and suggested rule ammendments in LAOK that were appropriate.

The Prussians had a brigade of guard/grenadiers who I gave all the modifiers suggested in LAOK and another brigade of normal line infantry. They were supported by a panzer division....er, cuirassier brigade with a couple of guns and some hussars added in for the hell of it. The Prussians had to march onto the table, and the game was played lengthways down my 6' x 10' setup.

John took the Prussians and began his advance. Immediately his guards blundered and headed off at an angle exposing their flank to the Russians. Sadly only Cossacks were anywhere near and they refused to budge, of course. With the all the Prussians on the table I charged my Serbski Hussars at the Prussian von Reusch Hussars, who countercharged and defeated the Russians thanks to some rubbish dice throws (what else?). They pursued, hit them again and broke them. Not a good start! Meanwhile the rest of the Prussians were advancing methodically towards the Pandours holding the river crossing and sniping at the cossacks who still refused to move. One Pandour unit broke so the remnants of the advance brigade were forced to retire (much to the relief of the cossacks!).

On the Prussian right there began an almighty cavalry battle that lasted the whole game with much too'ing and fro'ing, and the advantage swinging from one side to the other. In the end, although the Prussian Hussars fled the field, one of the Russian cuirassier regiments was also destroyed and the other shaken.

Prussian infantry was now pouring across the river. One regiment bravely/foolishly elected to charge the guns. They almost made it but were shot away and recoiled before breaking the follwing move after taking more artillery fire. A firefight (of sorts) erupted along the whole line, and Prussians just about had the better of it despite some poor shooting from John. I had made the Russian infantry stubborn and valiant which meant that whilst they were crap at firing in comparison to their opponents they were difficult to budge. Did them no good in the end though! I did manage to halt the Prussian Garde for a couple of moves but in the end the Prussian cuirassiers began to roll up my left flank. My reserve grenadier brigade was very slow off the mark as I kept faling my command rolls but we did get moving in the last move. Too late though!

Both sides had taken quite a battering. I thing if either side had lost another unit it would have tipped the balance as my first infantry brigade and John's line brigade were taking severe losses. Under BP if your brigade looses half its units it has to withdraw. If half your brigades go, so does your entire army. It was that close for both of us. Superior Prussian firepower and drill was nicely balanced by the toughness of the Russian infantry. When we stopped the game it was clear that we had fought each other to a bloody draw, which seems about right given the historical outcome of most Russian vs Prussian SYW battles.

Verdict - the ammendments worked well as did the 'national characteristics'. Even the best Prussians die as quickly as the rest of toy soldier humanity so John had to be careful not to squander his good units. We particularly liked the rule ammendment that you can't fire if you move more than once as it kept us both in check and added to the period 'feel.' Most importantly, we fought a pretty large game to conclusion in an evening, it was FUN, and it was tense throughout and uncertain as to who might win right to the end. It was also great to get my SYW armies on the table after such a long break, as was the excuse to put my new windmill on!