Well, (almost) all of my AWI and Seven Years War stragglers are now painted so I decided that with half term coming up the time was right to consider another project. Has to be 28mm as I only have terrain and building in that scale and ideally something that won't get too out of hand like my previous projects. I did consider doing the 1st Carlist War - nice figures, interesting and colourful uniforms, and suitably different to my other stuff but having proced up two armies plus suitable buildings I decided that it was going to be a costly exercise. I came to the same conclusion about the Crimean War, again in 28mm although the factor that knocked it off the top of the list was the prospect of painting more redcoats again! I've been rambling on about doing the Thiirty Years War for a couple of years, so I sent off for a box of Imperial infantry to see what they're like. It took me about an evening to assemble the figures (+/- an hour or so as I really can't remember and the task of cutting and sticking plastic figures together had to be supported by a few glasses of chilled Chablis). Despite the wine, the figures all went together without mishap and I have primed them using Warlord Games' red spray which has covered them a treat. Inspired by my glueing skills I have now ordered an Imperialist starter army and the same for the Swedes. I'm looking forward to making a start on the first unit later this week by which time the other stuff will have arrived, I hope. I missed Triples due to a bad back and too much practical parenting going on - daughter stressed out doing AS exams, otherwise I might have bought the troops there. Durham Wargames group have their show in a couple of weeks time so I might be tempted to drop in, but as the show is almost devoid of games (two in total which is a little short sighted and appears to be cash driven) I very much doubt it. The only trader I'd be interested in would be Dave Thomas so I could rummage through his scraps box for suitable casualty figures. A wargames show without games (or just two) is like a pub without beer, a museum with no exhibits and just a souvenir shop, or, ....er, I digress.
By Colin Ashton - May 28, 2012 No comments: 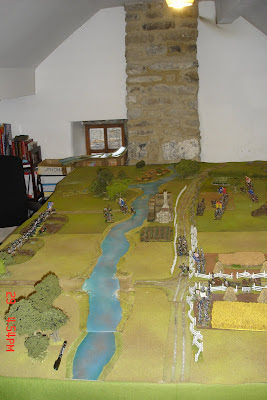 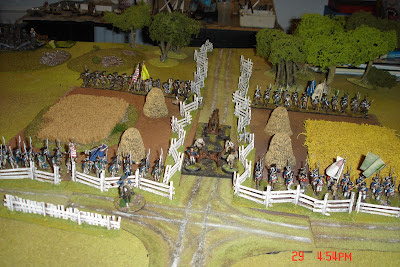 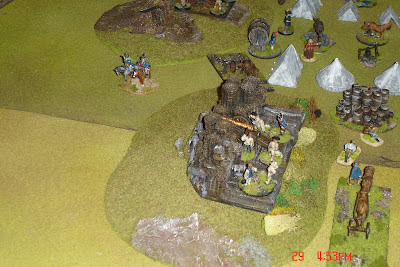 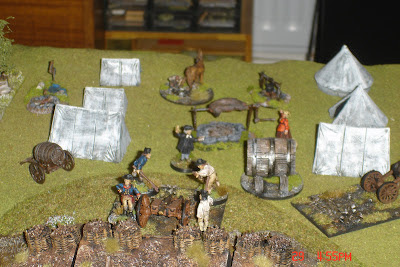 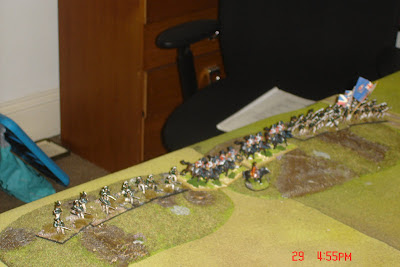 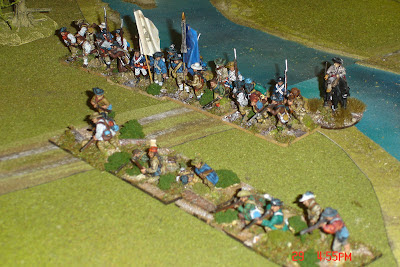 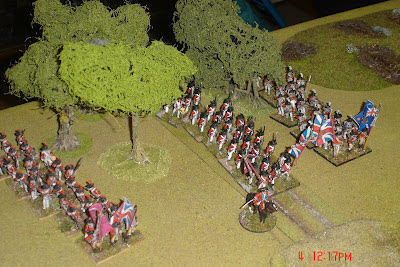 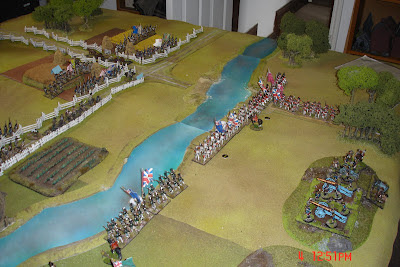 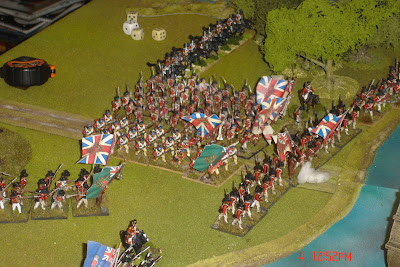 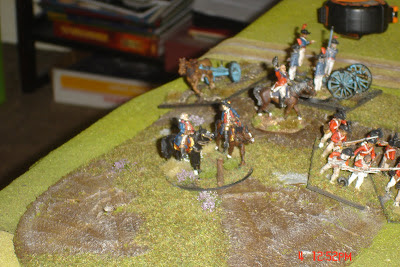 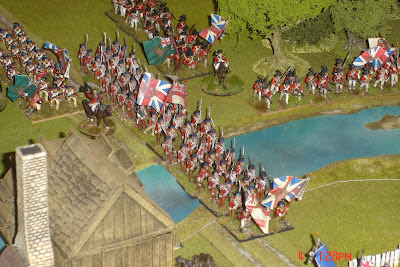 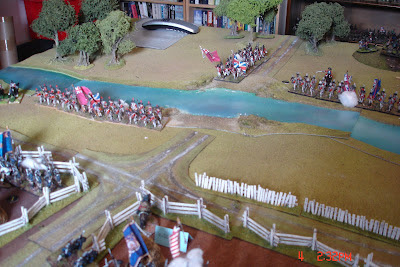 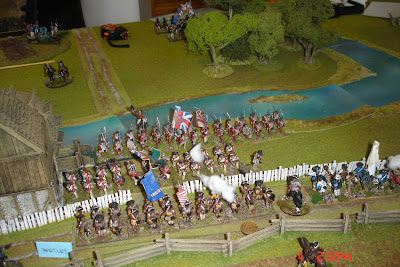 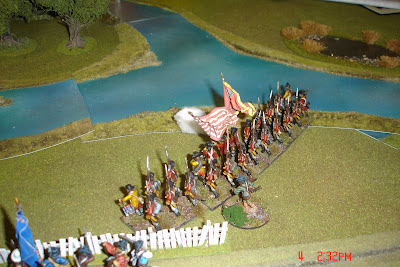 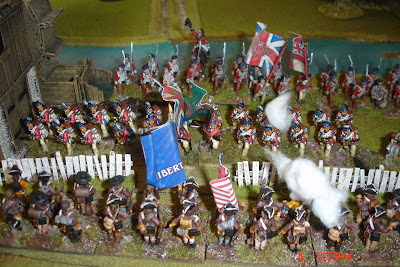 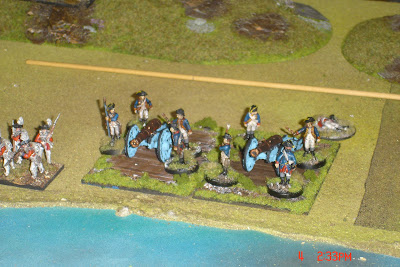 John came up yesterday to conclude our Brandywine extravaganza by refighting von Knyphausen's attack across the river. We'd previously fought Cornwallis' flank attack (see earlier posts) resulting in a British victory and the death of George Washington. This time we had the British with the objective of attacking the rebels deployed across the river, pinning them in place whilst Cormwallis' attack was going in further along the flank.
The rebels had 5 brigades, deployed facing the two fords that were the only crossing points. Three of their guns were dug in, and one brigade was on the British side of the river. We were using Black Powder again, but this time the British were straight out of the book as they were representing normal line troops and loyalists. I used what I had in terms of units as although I do have an extensive collection I don't have all the exact units for the battle. That explains why the Guards made another appearence and why the Queens Rangers riflemen were on the table pretending to be Ferguson's Rifles.
The game started with the rebels making a few changes to their deplaoyment and trying to get the exposed brigade back across the river. The British advance guard failed to appear but two infantry brigades did manage to get onto the table and begin deploying at the river. I kept a couple of battalions in column as I realised the only way to get across the fords was to hope for a very low command throw that'd allow me three moves. Great plans etc. My Highland brigade, the reserve artillery and finally the advance guard made it onto the table the following move and we spent several moves shooting bits of each other. During the course of the next few moves both sides took some heavy casualties and were hindered by a constant series of 6's that resulted in many units being stuck in disorder for significant chunks of the game. Casualties mounted and the rebels lost two units of skirmishers while Fergusons Rifles broke and the Queen's Rangers blundered, thankfully backwards! Boths ides suffered from some really bad command dice but also some fortuitous  saving rolls. I also forgot to bring on my Hessian brigade which was to prove a big mistake, but as they were not engaged in the real battle perhaps that was just fate getting in the way?
Around move 8 one rebel brigade had to be removed from play as it had received orderes to retire and support their comrades fending off Cornwallis. This left the rebel left flank in a weakened state, but sadly my brigade facing them was in no position to move. Also, the previous move I had plucked up the courage to send my highland brigade across the river. sadly, the 1/71st got stuck in column before they could get fully across the river and as they were disordered were unable to move. I did get a couple of units across but they were caught in a murderous crossfire and suffered heavily. On the far right I had pushed a battalion plus the 16th Light dragoons across the other ford, but the infantry were again held up in disorder and the cavalry had to retire as the rest of their brigade had been broken. Back on the left, another of my brigades became 'spent' as two battalions had broken, the Highland battalion stuck in the river in diosorder finally broke and the other two Highland battalions were likely to follow them  as they were facing more than twice their number of rebels, supported by artillery. There was no little likelyhood of the British being able to force the crossings. Saying that, the rebel line was quite battered with more than their fair share of disordered and shaken units, and the centre was looking quite flakey. Unfortunately the British had run out of steam....and men!
At around move 18 we called it a day, having fought for a little over 2 hours. It had been bloody and attritional, incredibly frustrating due to some poor command throws and lots of disordered units, but it had also been a challengin and enjoyable game. In terms of this game, the rebels had clearly beaten the British, who had failed to cross the river in any strength (and stay there), but taken with the outcome of the other game, it was an overall British victory as the rebels had been pinned and were in danger of having their flank rolled up by Cornwallis who we reckoned was almost at the table edge. Black Powder worked very well again.
Next time? Guilford Courthouse I hope.
By Colin Ashton - May 17, 2012 2 comments: