"MOM!!!! There's a buncha Hessians about ter trample through the pumpkin patch!!!" 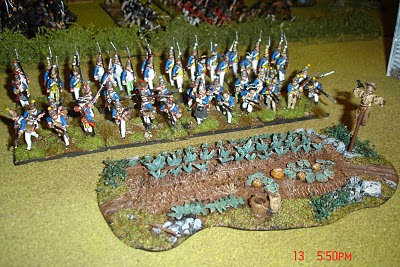 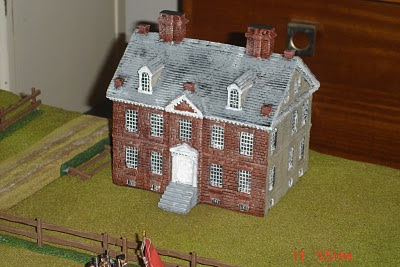 I was away with work all last week so didn't get anything done. I took some figures to base coat but the light in my hotel room was just not good enough, even though I'm expected to work in it! Anyway, back home I finished basing up the Hessians, flocked my garden and also put the finishing touches to my Magister Militum 'Chew House' from Germantown. Quite pleased with the results. Must try and get my Queens Rangers done and start Hessian Rgt von Bose this week.
By Colin Ashton - January 24, 2011 No comments: 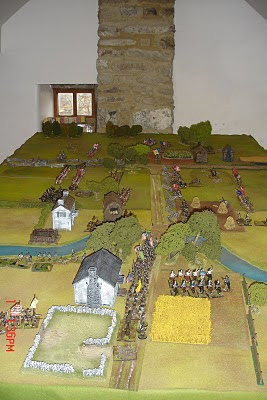 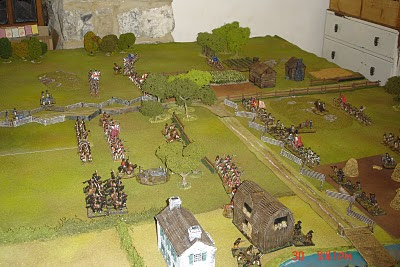 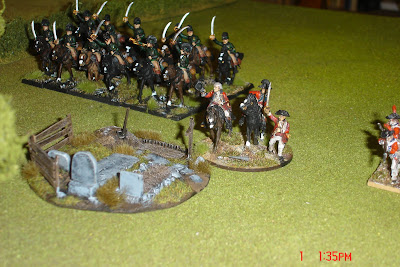 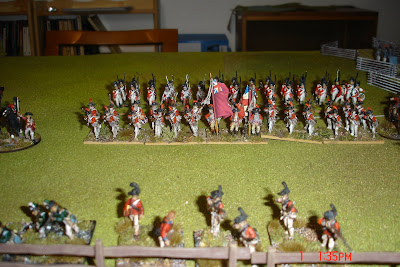 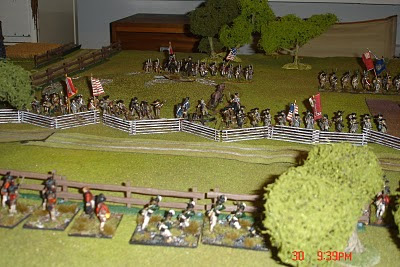 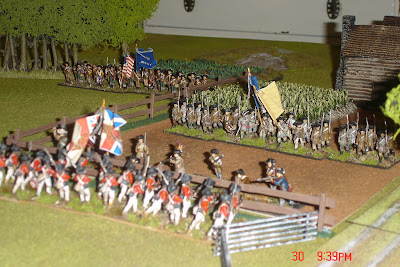 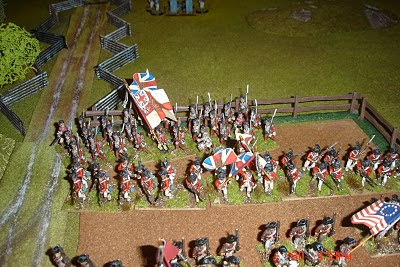 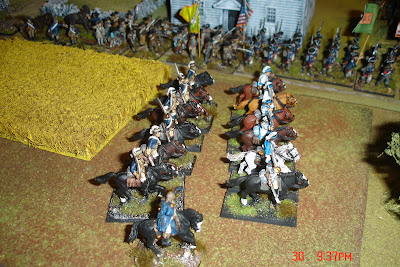 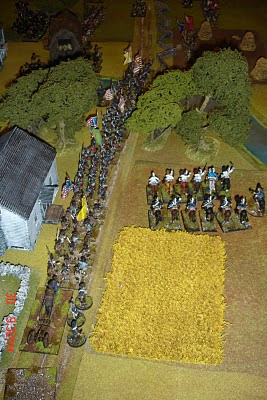 THE WORLD TURNED UPSIDE DOWN

Well, I've been on a mission today, and spent all morning and much of the afternoon moving my games room. The first hour was spent dismantling my old cobbled-together wargames table and making space for the bits in the garage. I then moved or cleared the junk in the spare bedroom (now in car ready for run to tip in the morning) and took the bed to pieces and rebuilt it in my old games room. Easy except that double mattreses have a mind of their own, or this one did! After further exchanges of household clutter and wargames stuff across the top landing I finally (for today anyway) erected my new 10' x 6' table. I already have a 6'x6' terrain mat so I'd bought another 6' x 4' one and thankfully the old and the new are a near match. I still have to move or rearrange some heavier items, i.e. bookcases, a desk and a chest of drawers, and I came across a load of Sylvanian families and Breyer horses and stables stuff that my daughter has grown out of that will need to go in the loft/garage until I can dispose of them 'thoughtfully', but to be honest I am knackered! Maybe tonight after Primeval on TV.......?
By Colin Ashton - January 08, 2011 1 comment: 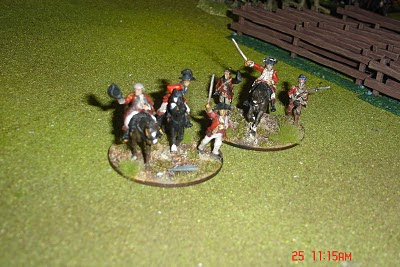 As promised earlier, pictured below are my Armand's Legion cavalry. Apparently they were really quite rubbish! The uniform is nice though. Also pictured are additions to my British commanders. 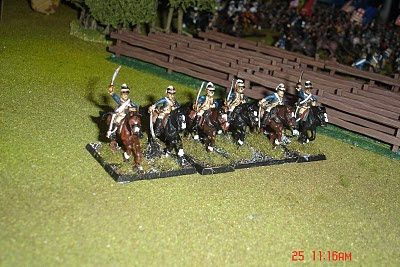 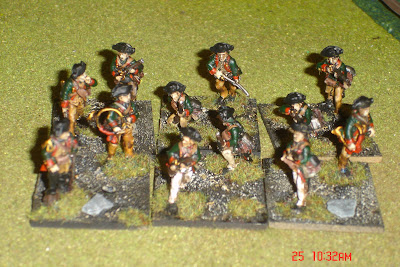 Well I managed to finish more troops for my AWI armies last night, this time some Hessian Jager. I did try painting stripes on their trousers but gave up as my hand is not steady enough! Yesterday was also my first day of abstaining from alcohol since the Christmas and New Year binge-fest of the last two weeks! I'm just waiting for an order frmo Maelstrom for some 'highland tuft' to finish off the bases. Also completed are a unit of six Armand's Legion cavalry. No picture yet as the one I took this morning is totally rubbish so will add a photo later today. I'm very happy with the progress I'm making painting these troops, and they don't look too bad. However, I am also very lucky that I have an over-the-bed-type table which I've set up in the lounge, so I can paint, watch tv and be sociable all at the same time! It's one of the few good things that come out of breaking my leg big time nearly 4 years ago and being confined to downstairs for eight weeks in an ankle to thigh cast, as my partner and also my mates brought my painting stuff down from my games room and here, more or less, it has stayed ever since (except when anyone comes to view the house).
By Colin Ashton - January 06, 2011 No comments: 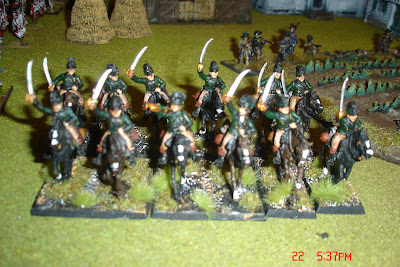 This weekend I managed to finish my Architects of War tobacco field and my British Legion Cavalry - both pictured here. I've just started my Hessian Jagers and next up will be Armand's Legion cavalry, followed by the Queen's Rangers I think, although I still have half a dozen American units to do. I'm off this week so in between practical parenting, taking the Christmas decorations down, and getting my daughter ready to go back to school I hope to continue the good progress made so far. 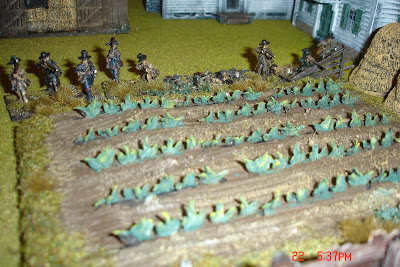 The end of the old and the start of the new

Well, 2010 is gone and hello to 2011. I was thinking this morning what I had achieved in the last year and it is quite impressive.

Started the year with 28mm Russian Civil War/Back of Beyond and now have getting on for 400 figures for the whites and reds, including nearly 100 cavalry, with assorted aircraft, artillery and armour, plus an enormous armoured train. Still need to finish my Freikorps though ;o(
The run up to Easter saw VBCW hook me, so I've managed to collect (and paint) troops for the BUF, the 'Government', Anglican League and the Socialists. Again probably around 400 figures plus more lots of vehicles, trucks, artillery, aircraft and TWO armoured trains.
October saw me go back to my favorite period, i.e. the 18th century, with the purchase of 28mm AWI. I've already listed whats been completed to date and I think this project will keep me busy painting for several months yet. I also managed to squeeze in some additions to my SYW armies with 24 Russian Cuirassiers and two 36-man infantry btns. Added to all the above has been the addition of a fair bit of scenery, including a Russian village, a variety of 20th century buildings and terrain pieces for the RCW and VBCW (including a factory complex), plus half a dozen AWI buildings. I dread to think how much all this lot has cost me but I won't even begin to justify it - much of it was recycled cash from ebay sales. Shame I sold my old 18th century Piedmontese army though but it hadn't seen the light of day for years! Won't ever sell painted stuff ever again though! The down side is that although I have some really lovely armies that have been great fun to collect and paint, I've only played about half a dozen games all year (excluding solo) due to work, illness and other stuff. Never mind, I'll be moving my games room across the top landing into a bigger room this week and look forward to being able to set my new 10' x 6' table up soon after that.