Take the high ground! Then hold it!

John braved the weather yesterday afternoon and came up for a game. I wanted to get my SYW Prussians and Russians on the table as they had suffered the most during the move and some running repairs were required. So, while they're off the shelves why not use them before putting them back into winter quarters?

The scenario was as follows. The Prussians need to capture and hold the high ground in the centre of the table as this feature dominates their lines of communication but also those of the invading Russian army. The Russians need to capture the hills for exactly the same reason as their invasion will be stalled even more than it already has been by inept generals if the Prussians can hold and possibly fortify them.

The Prussians have a small swift moving and flexible force to do the job. The command level of the CinC was randomly generated with only a 1 in 6 chance of it being a lowly 7.

The Russian army: All randomly generated command levels and here had to be at least one 6 and one 7.
CinC Me: command 8
Cavalry brigade (8) 2 units of horse grenadiers and 4 of cuirassiers
Cavalry brigade (7) 2 units of hussars
Infantry bde (8) of 2 grenadier and 2 line btns
Infantry bde (6) 4 line btns and 1 dismounted dragoon rgt
2 medium howitzers and 2 medium guns in two batteries (8)

Infantry battalions are 36 strong. The cavalry are in 12 figure 'squadrons'. With the exception of the dismounted dragoons all the Russian infantry were classed as stubborn. The Prussian Guard and Combined Grenadiers were superbly drilled and steady, while the Freikorps and Garrison btns were untested, meaning their stamina was unknown until the first time they were shot at. All the Prussians had platoon fire to give them a distinct advantage over the Russians in a fire fight. Our rules of choice, Black Powder, were of course used for this game.

We threw to randomise the entry points of both armies. The Prussians all arrived on their right flank, i.e. the end 4 foot of the table. The Russians managed to have half their force at each extreme of the table. Given that the objectives for both sides were in the centre, these entry points were extremely unhelpful to both armies. So, on to battle....... 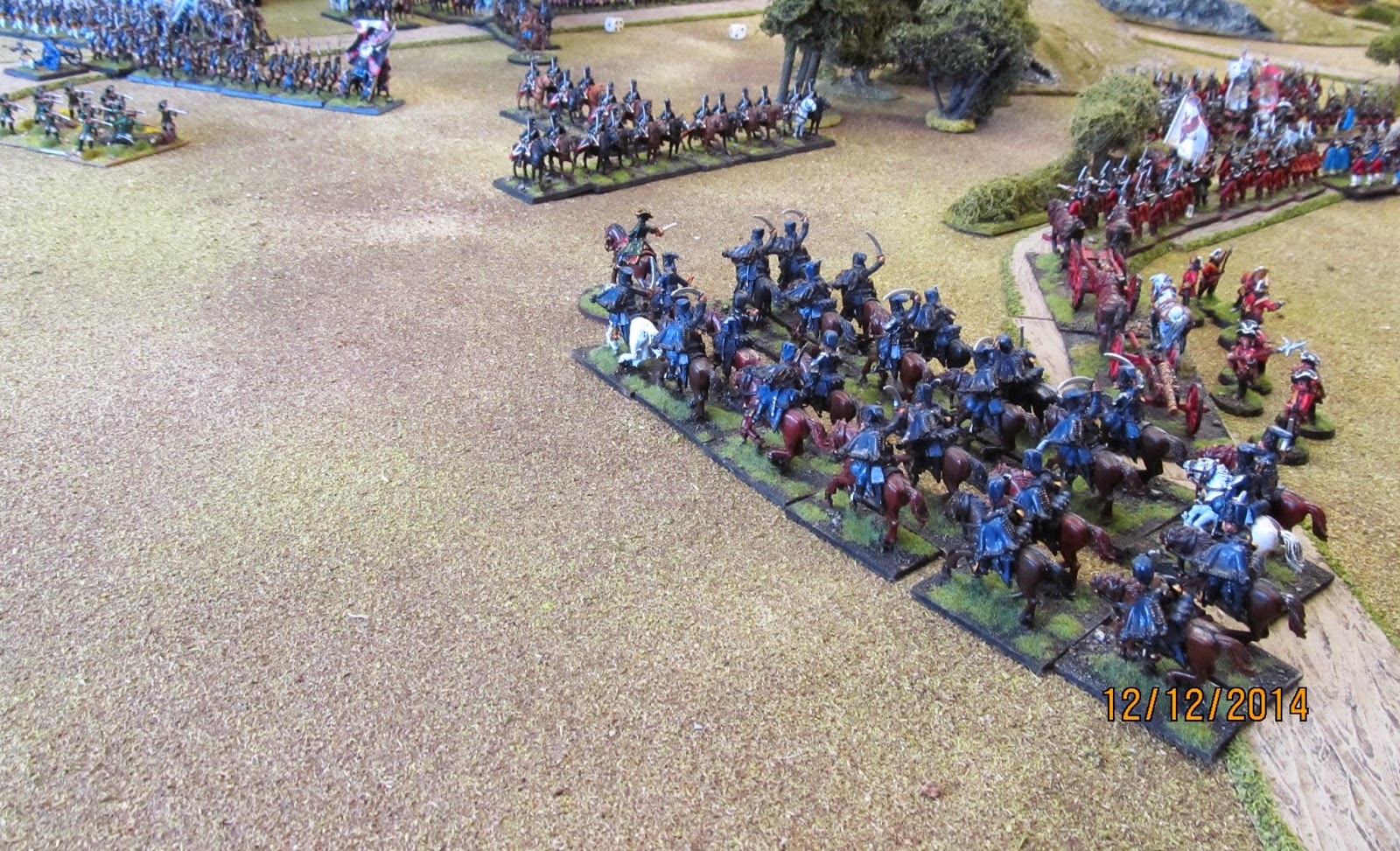 The Russian left flank. Serbski Hussars move to cover the flank of the Russian artillery. 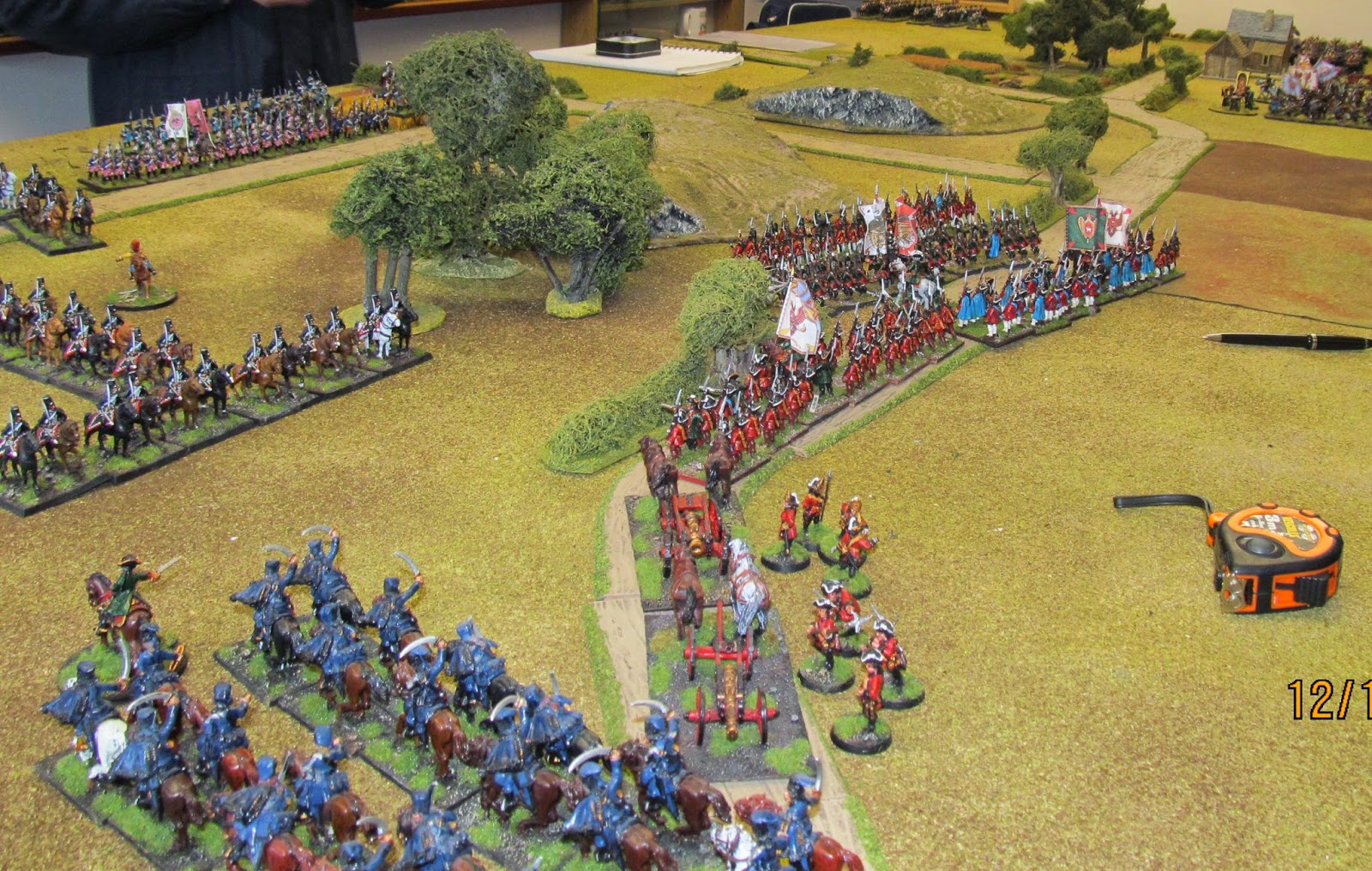 The Russian left deploys but the guns are stuck on the road. The Prussian Hussars tried to charge the guns but failed to reach. They in turn were hit by the Russian Hussars and pushed back. 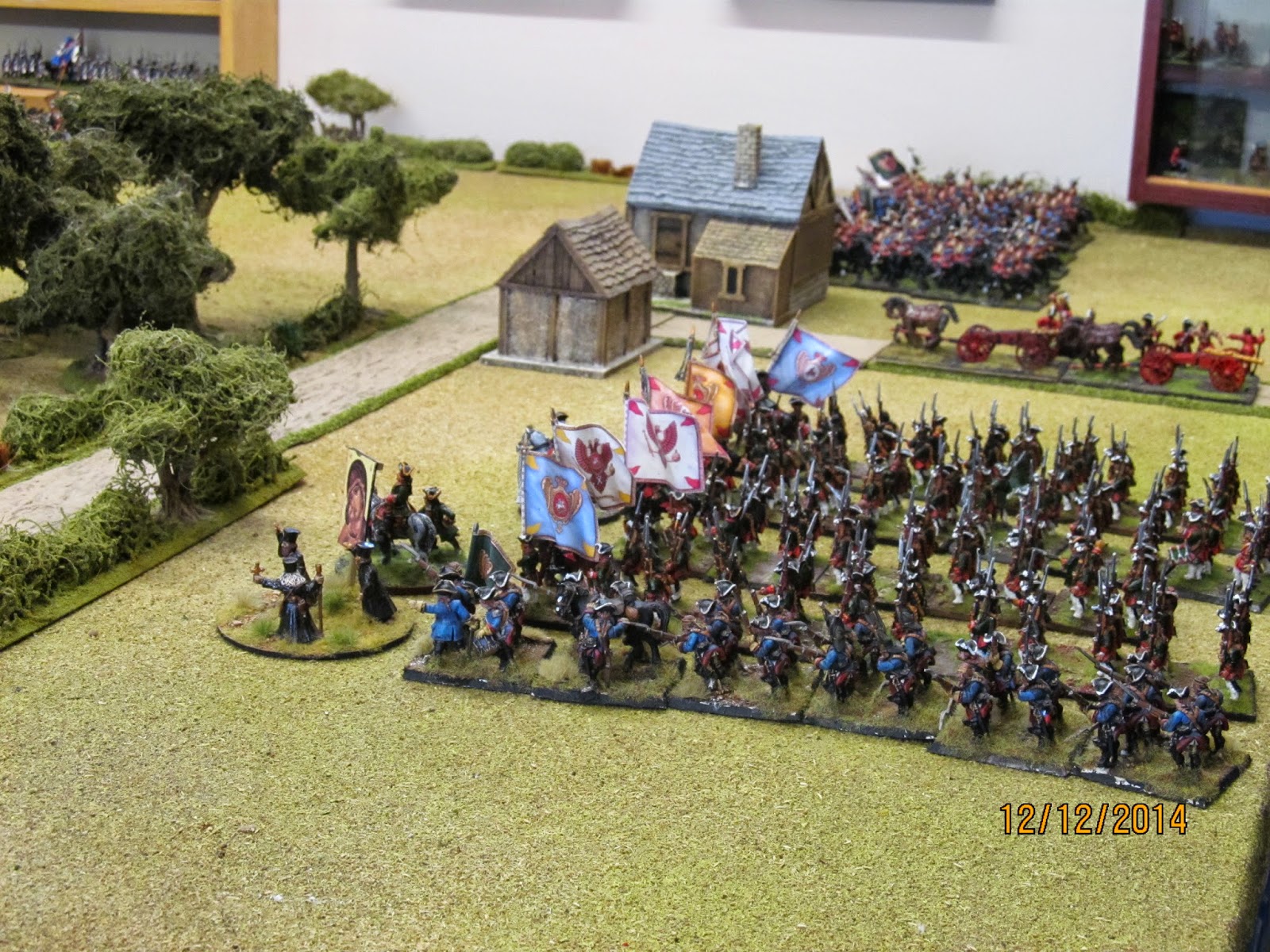 The Russian right flank. With a command rating of 6 the advance was pretty slow to start with, and the cavalry in the distance fared no better in getting going! 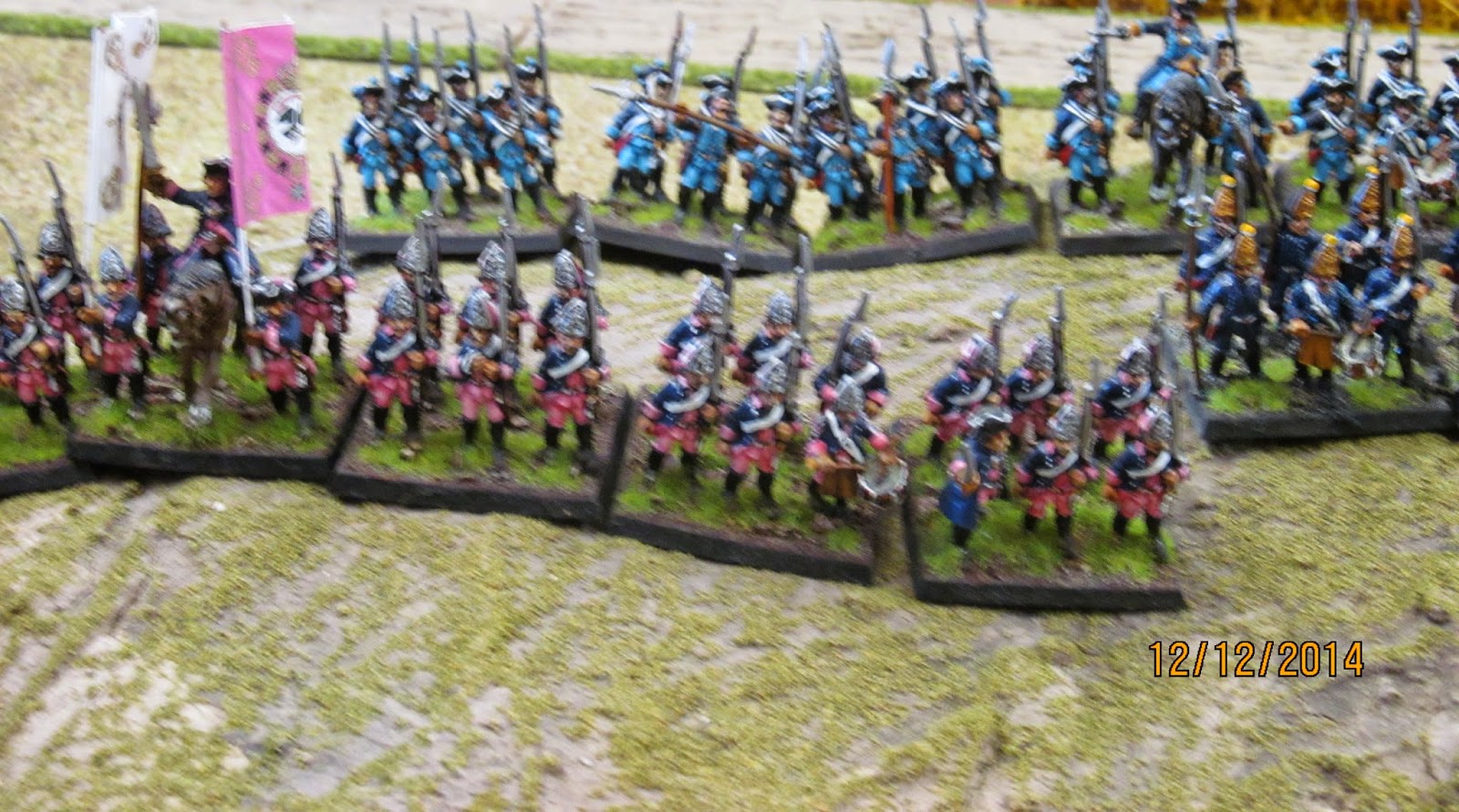 Prussian 40th Fusilier Regiment (my favourites, looking just lovely in pink) advance to the top of the left hill, supported by a Freikorps battalion and a battalion of Combined Grenadiers. 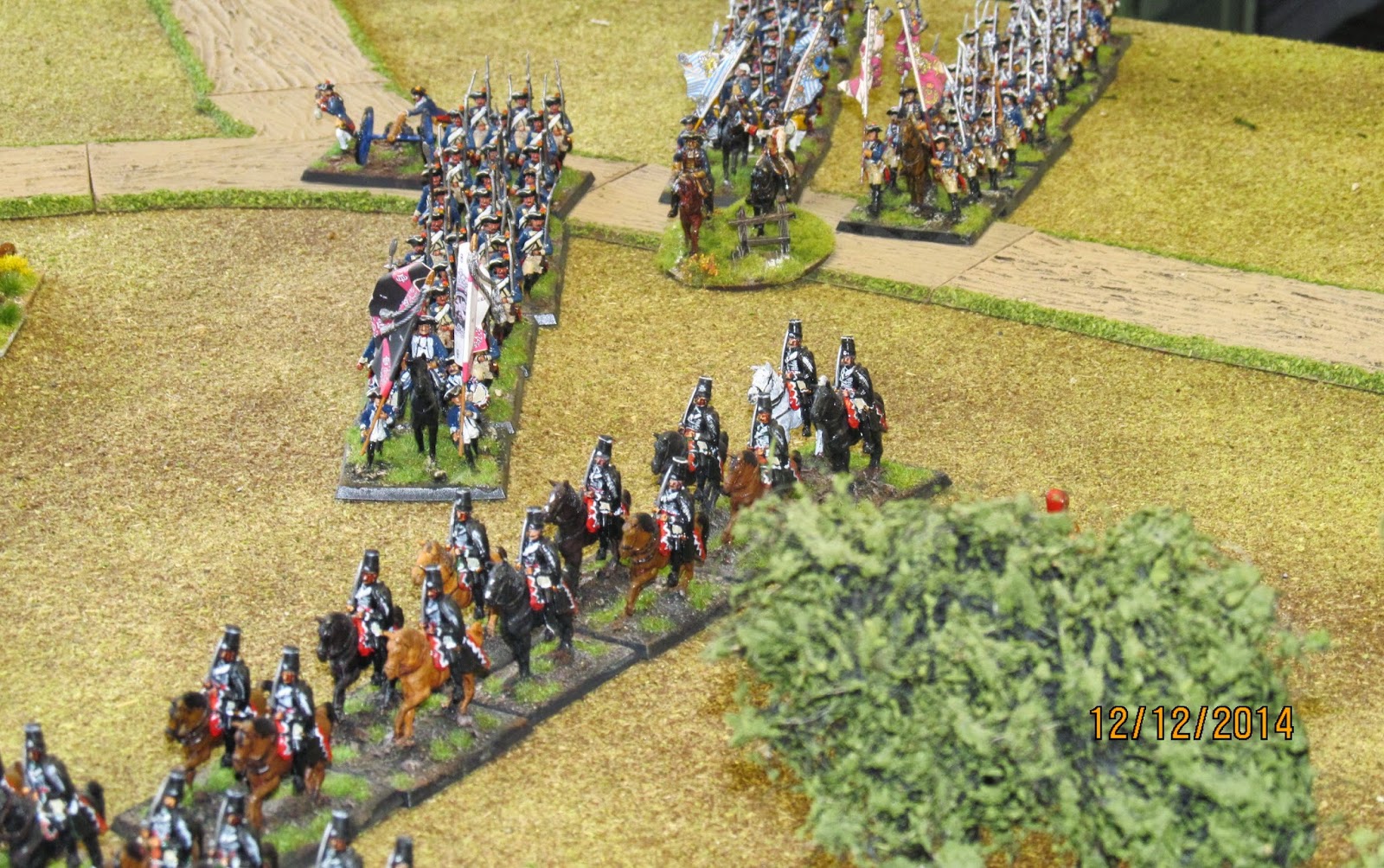 The Prussian right, with three battalions, including the Guard, moving up behind their Hussars. 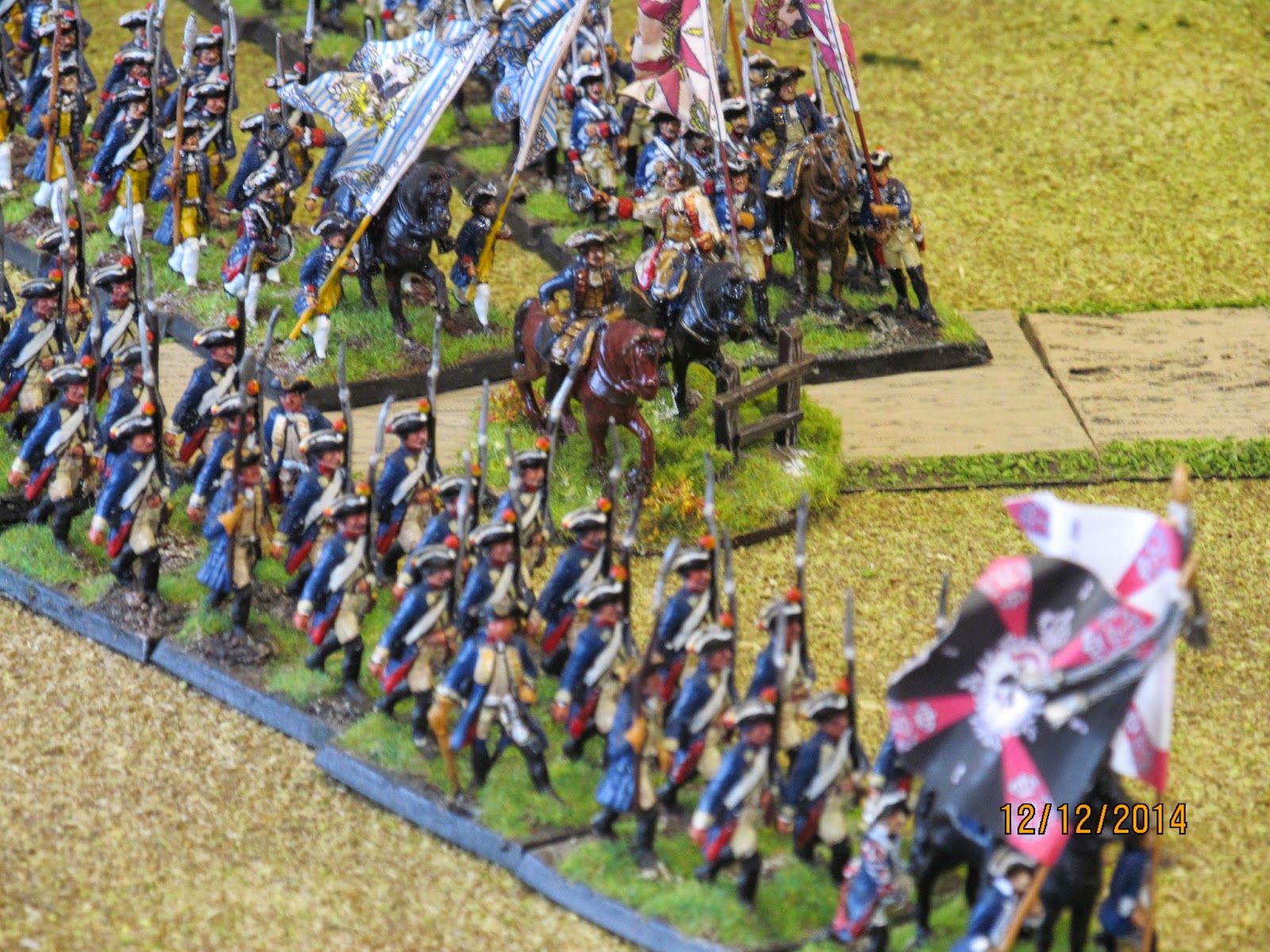 Another shot of the infantry on the Prussian right. 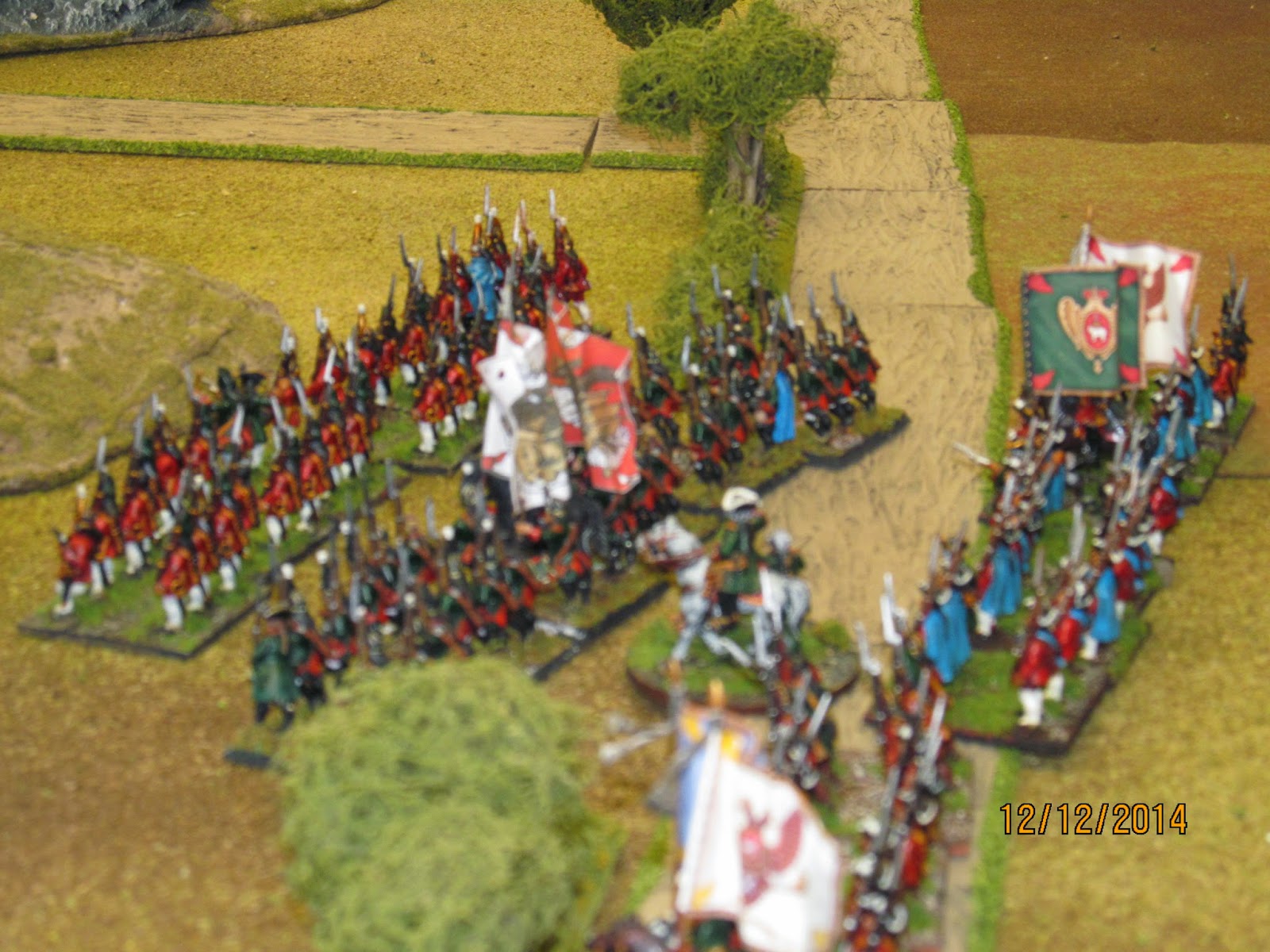 Russian grenadiers about to launch their assault up the left hill. 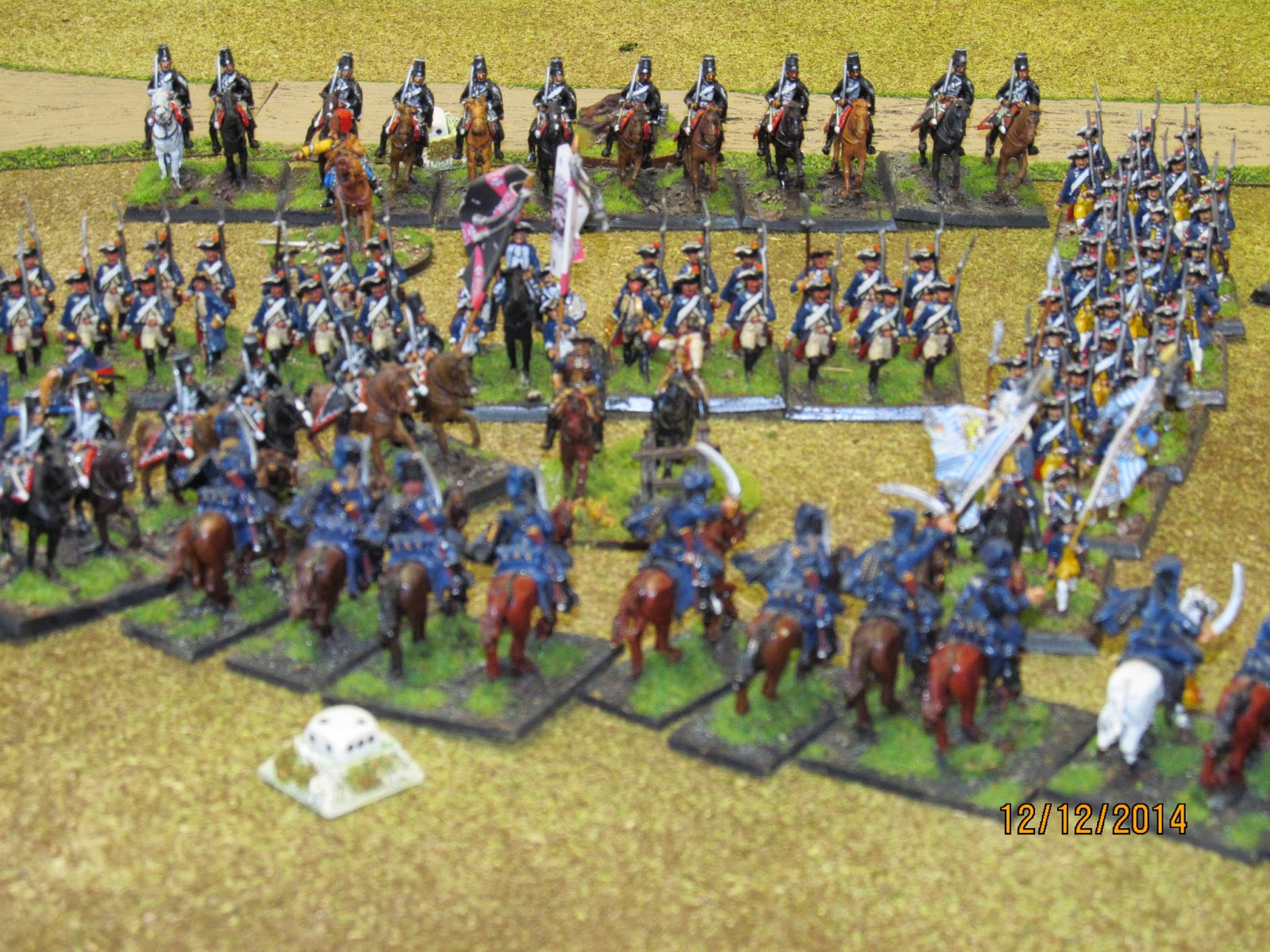 Having seen off the Prussian Hussars the Russian Serbski Hussars burst through and hit the head of the column of Prussian Guard infantry. The Guard held them off until more Prussian Hussars crashed into the flank of the Russians, breaking them. Although they were ultimately both lost, between them the two units of Russian Hussars had done well in holding back the entire Prussian right wing for several turns, long enough for the Russian attack in the centre to go in. 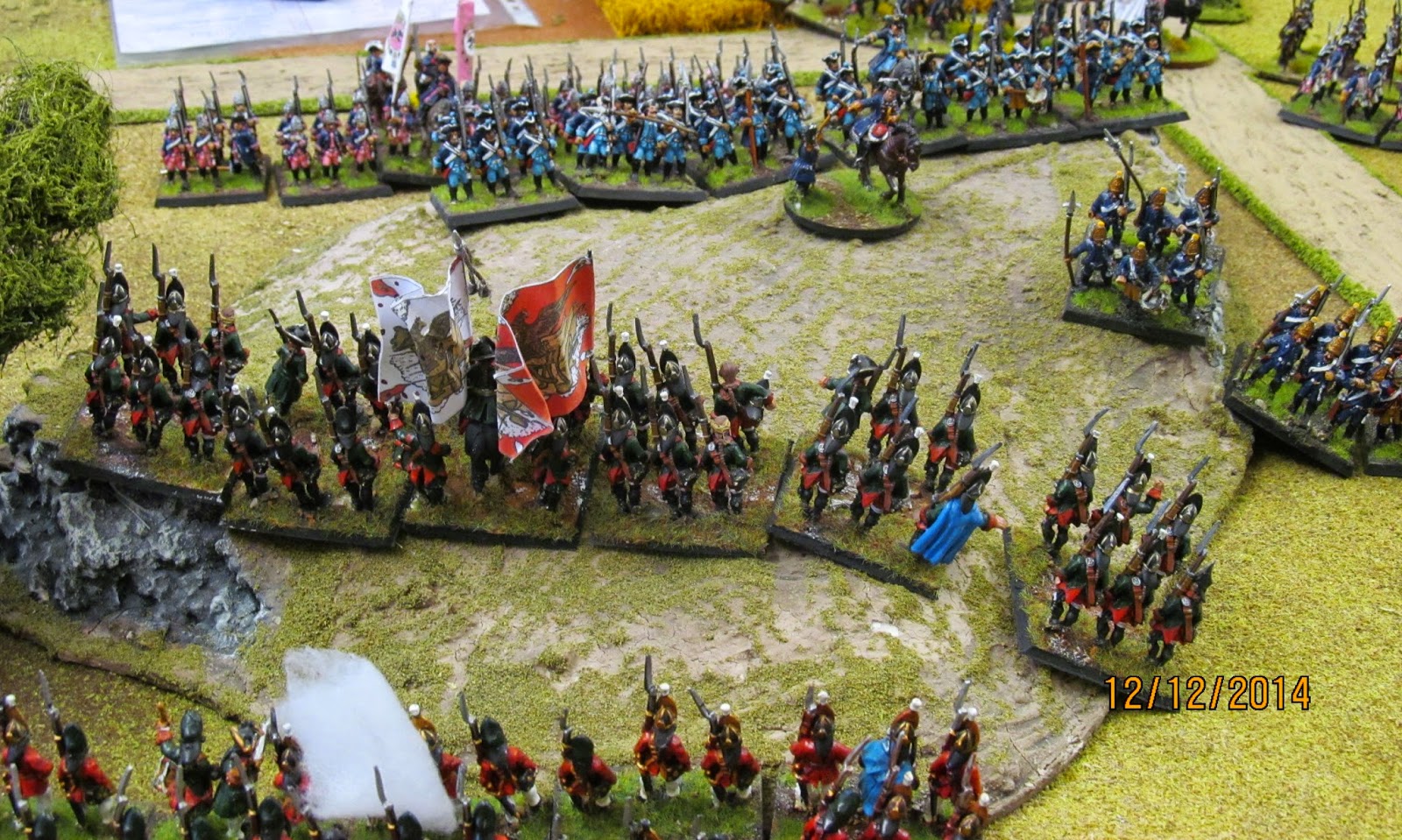 Russian Grenadiers braved the Prussian musketry and charged in with the bayonet, driving off the 40th Fusiliers and exposing the Freikorps battalion. When John threw to see what their stamina was he scored a '1'! Not good! 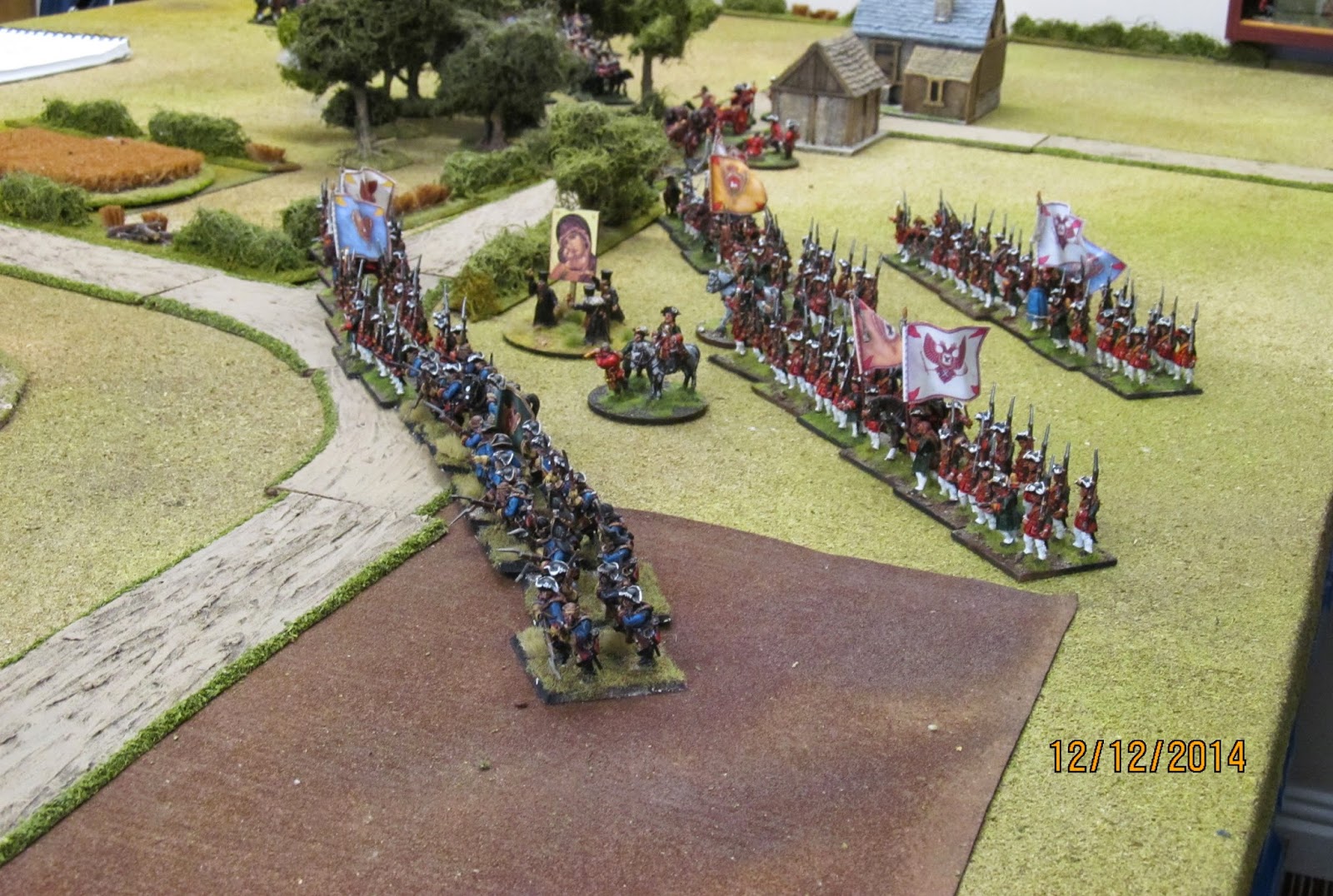 The Russian right finally got moving and into position to attack the Prussians who had by now occupied the other hill. 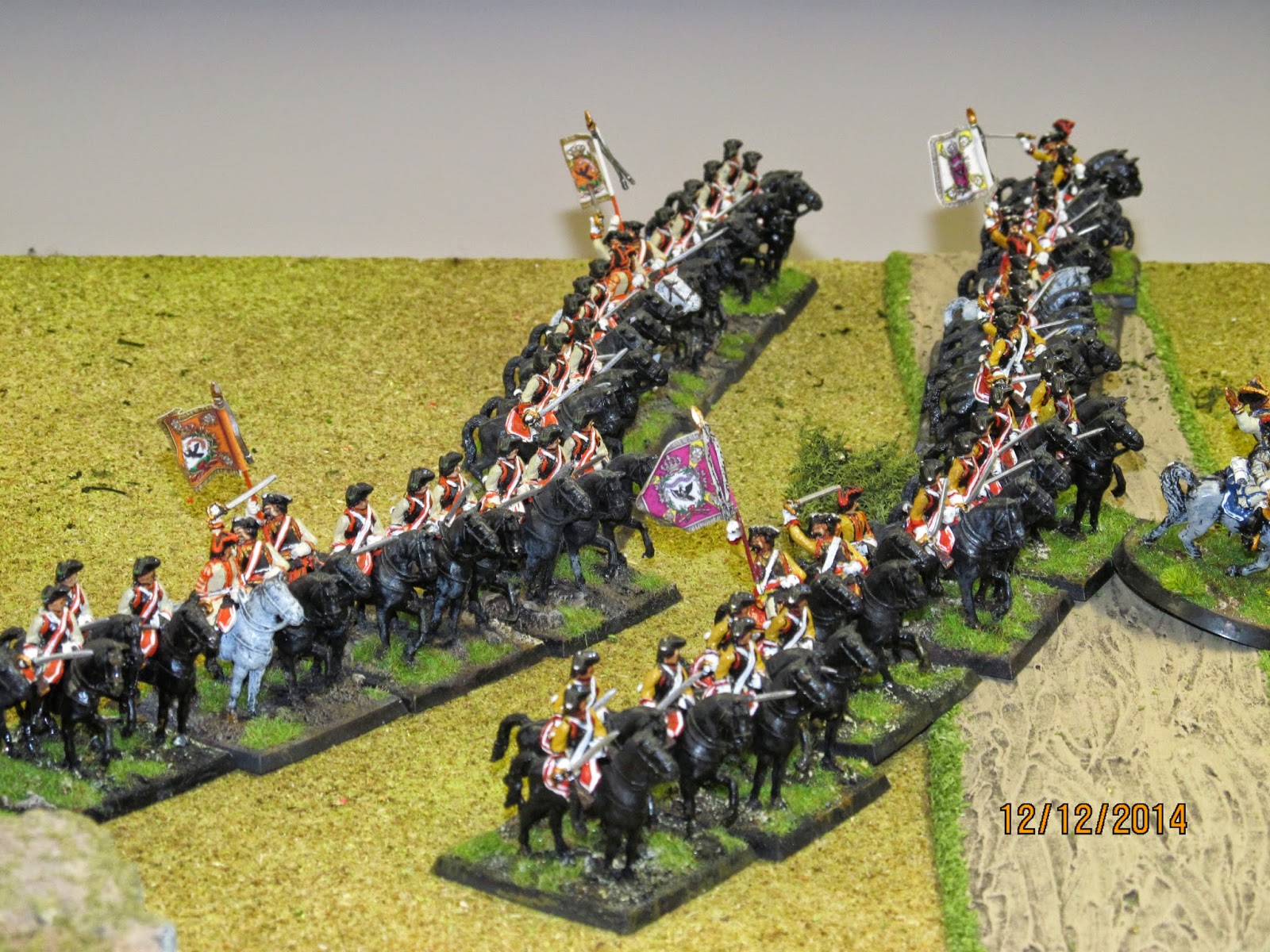 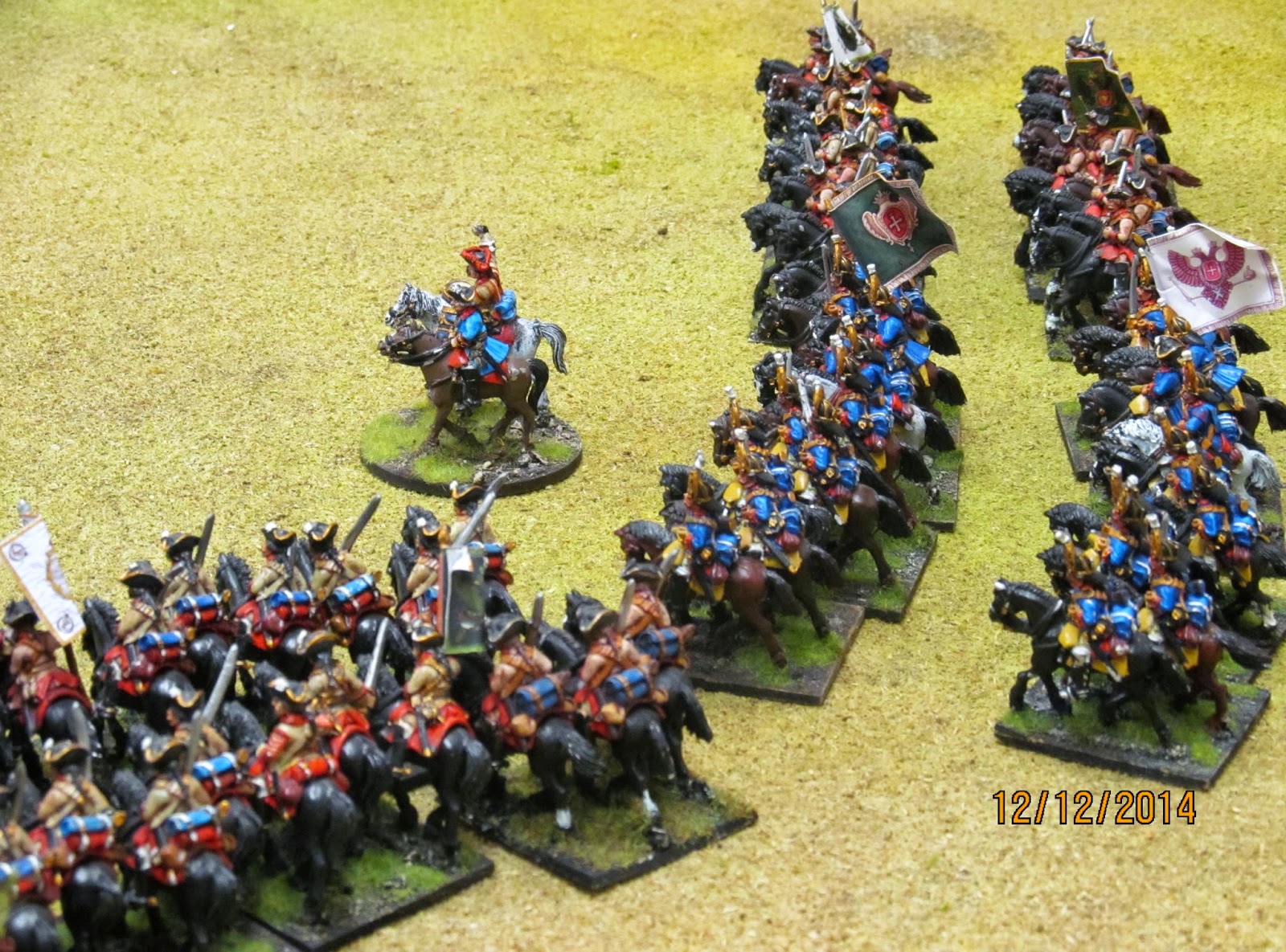 The Russian cavalry before their clash with the Prussian Cuirassiers. 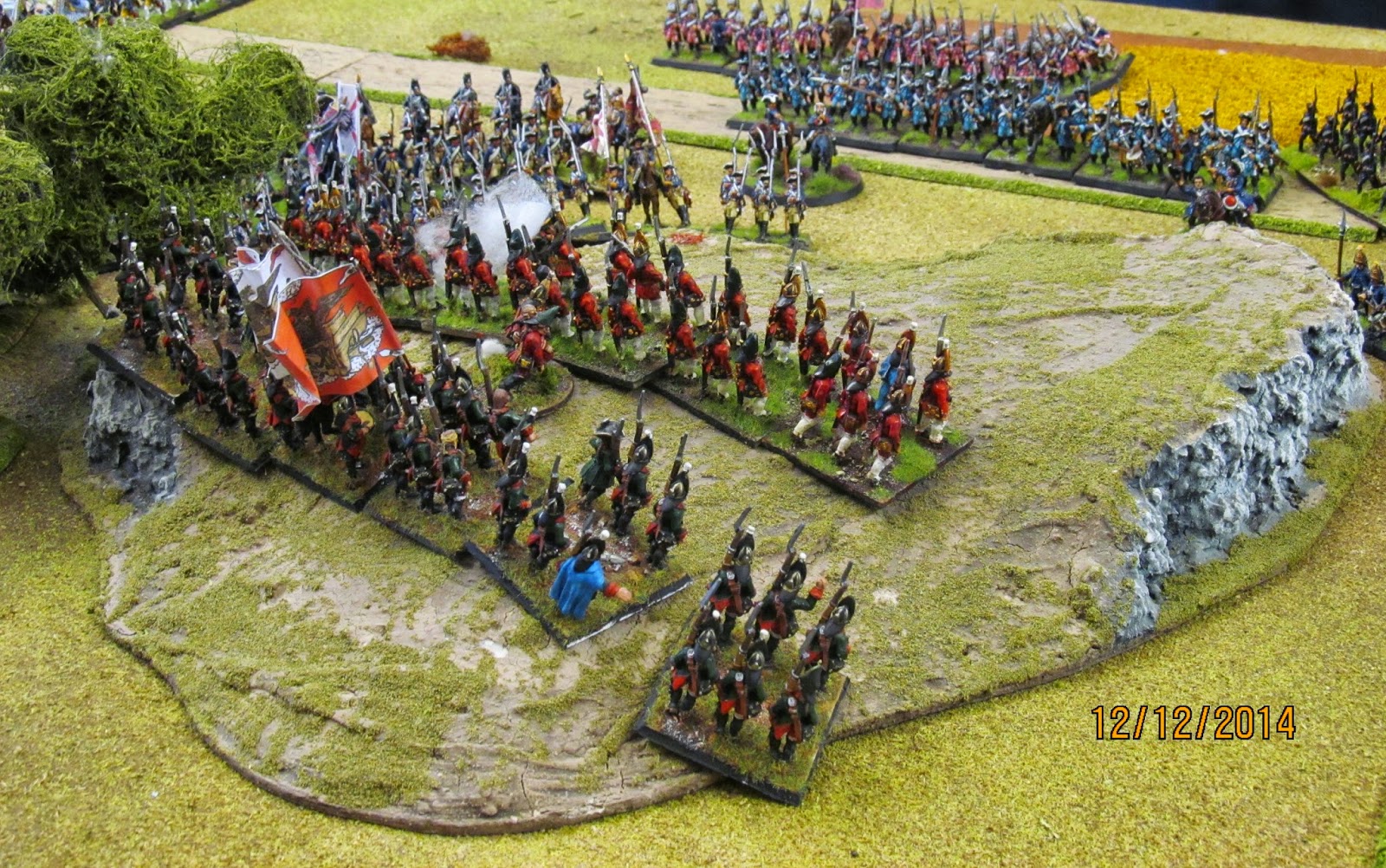 The Russian Grenadiers took heavy casualties but hung on, driving off the Freikorps battalion and forcing the brigade to retire shaken. In one turn the lead battalion of Grenadiers took 12 hits and saved 11 of them! 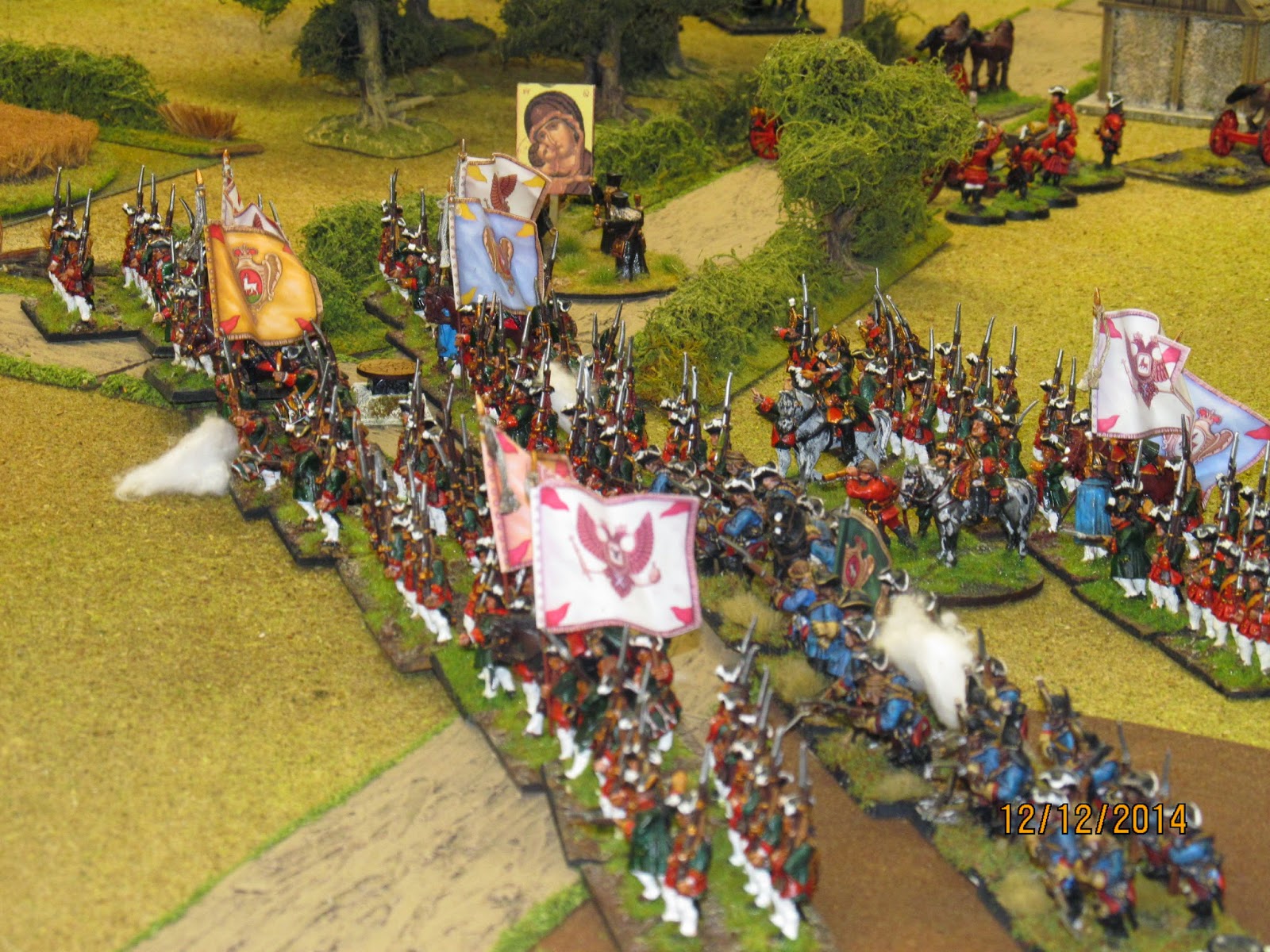 The Russian right exchanging fire with the Prussians out of shot to their front. One battalion was broken but the others held on and supported by their artillery drove back another Prussian brigade. 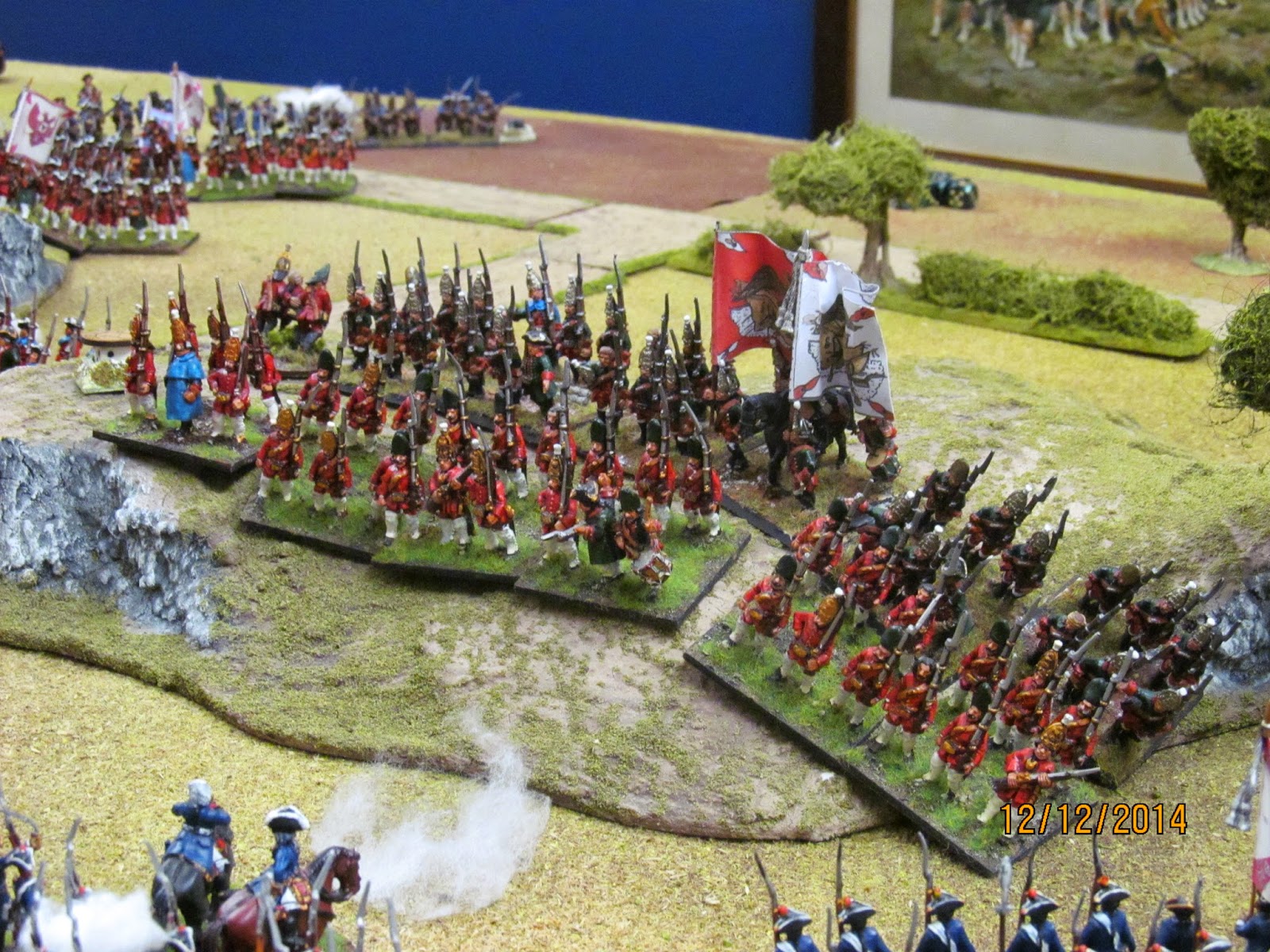 The Prussian view of the Russian Grenadiers' attack. 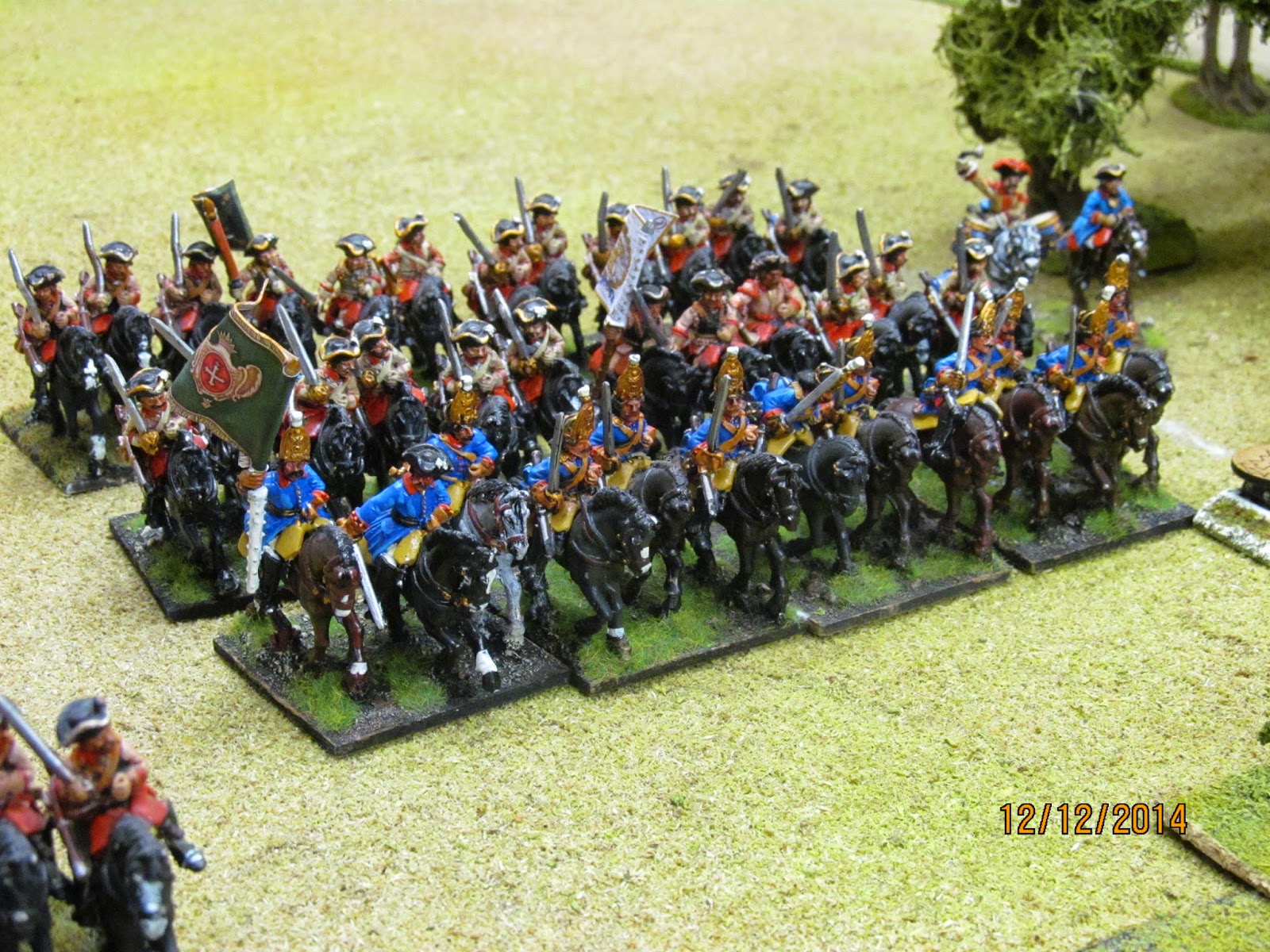 In a fierce melee, two units of Prussian cuirassiers were broken by the Russian cavalry, although one Russian Cuirassier unit was destroyed early on and a unit of Horse Grenadiers towards the close of the action. 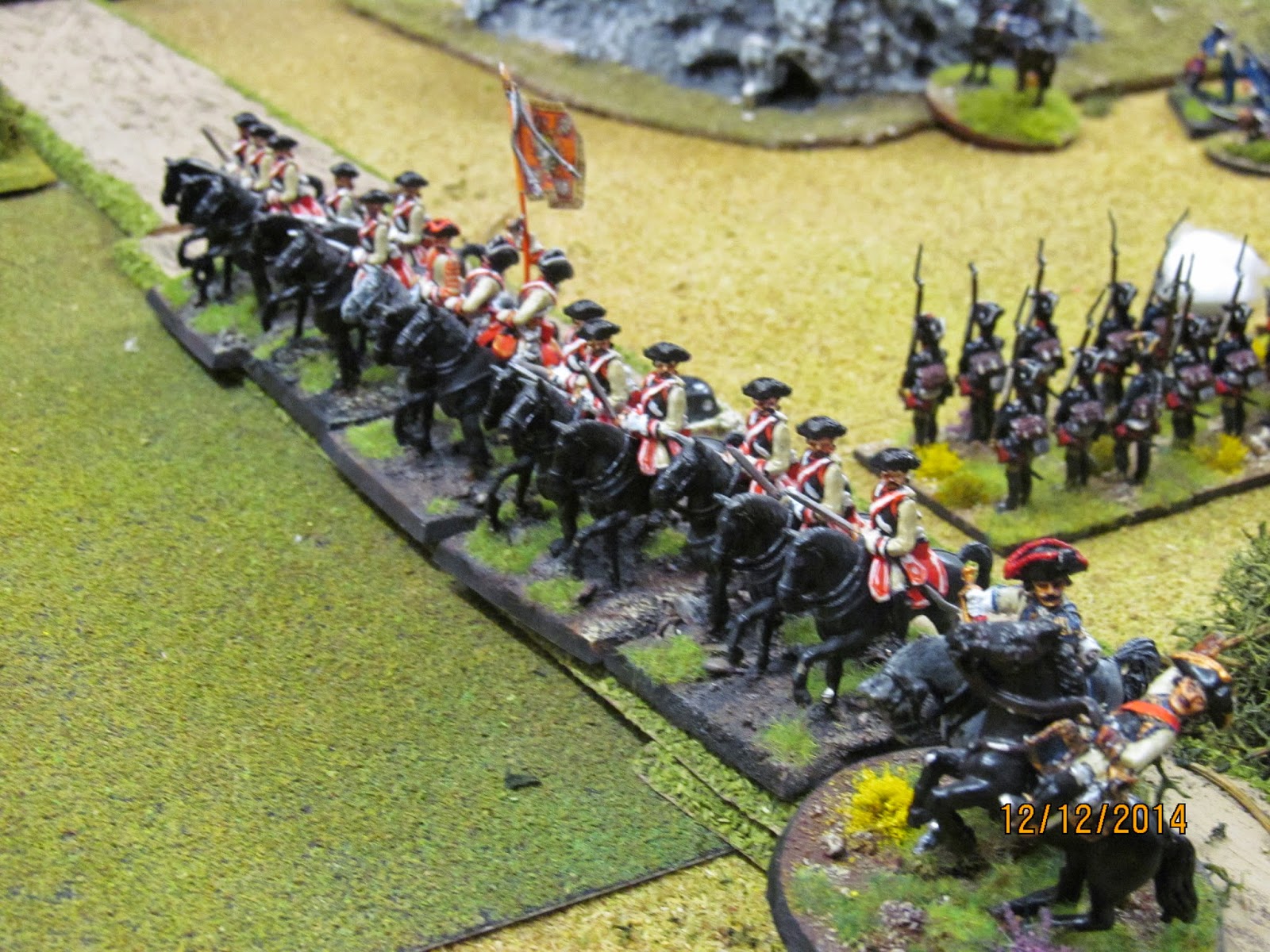 The Prussian cavalry commander exhorts his men to fight on but his efforts were in vain. A third unit was shaken and the brigade forced to withdraw, a spent force. 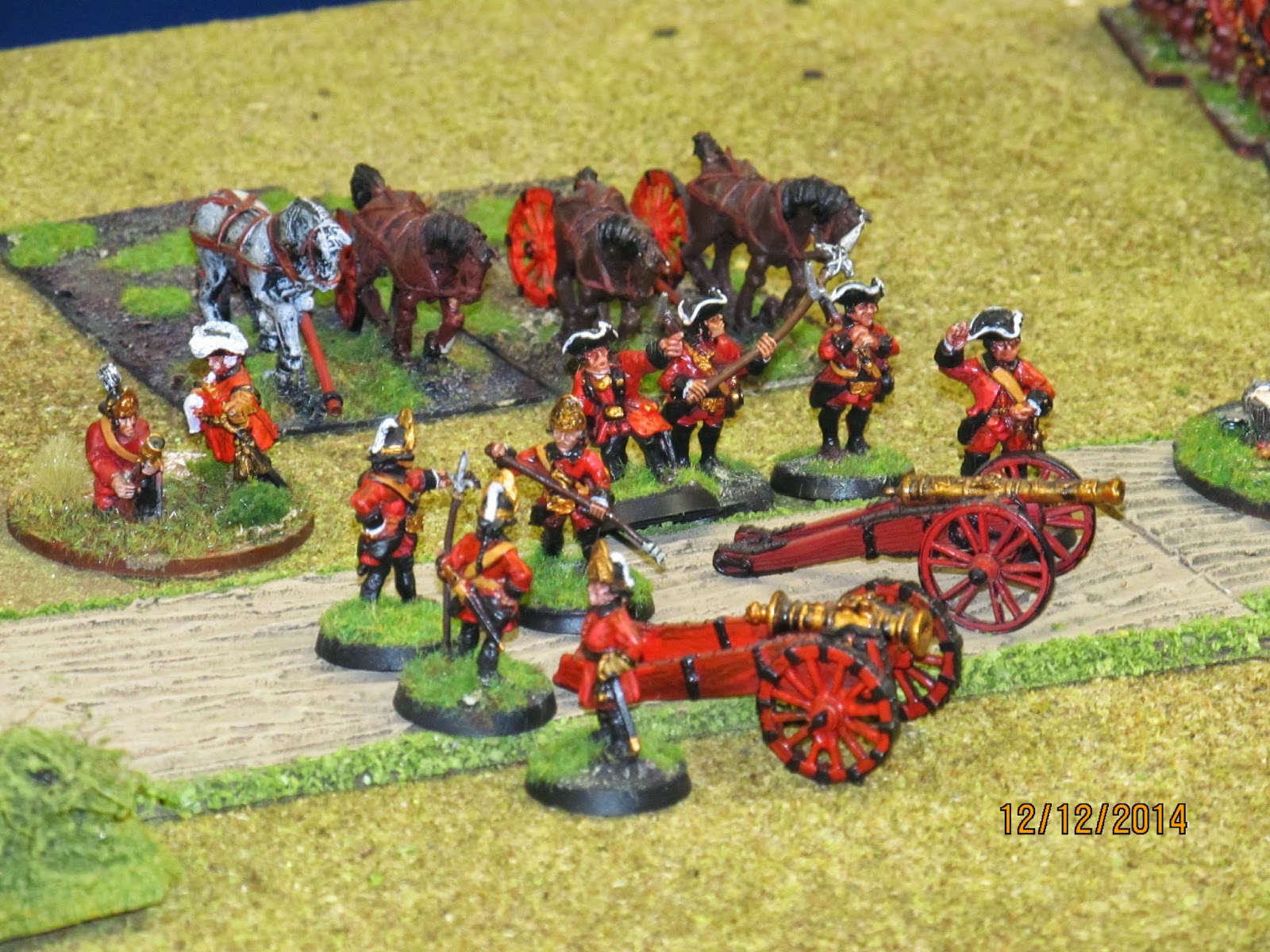 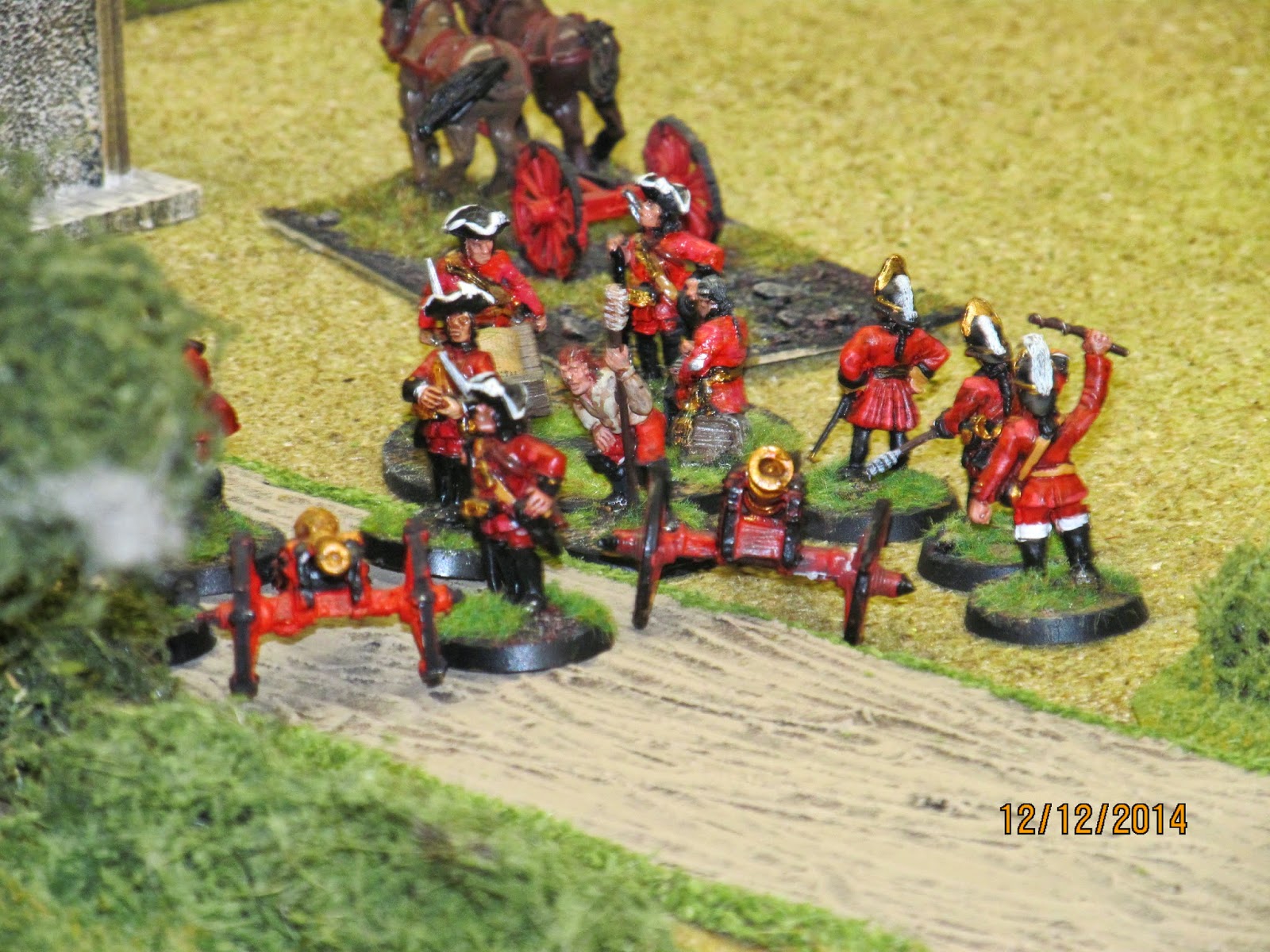 The Russian artillery, which contributed significantly to their army's victory. 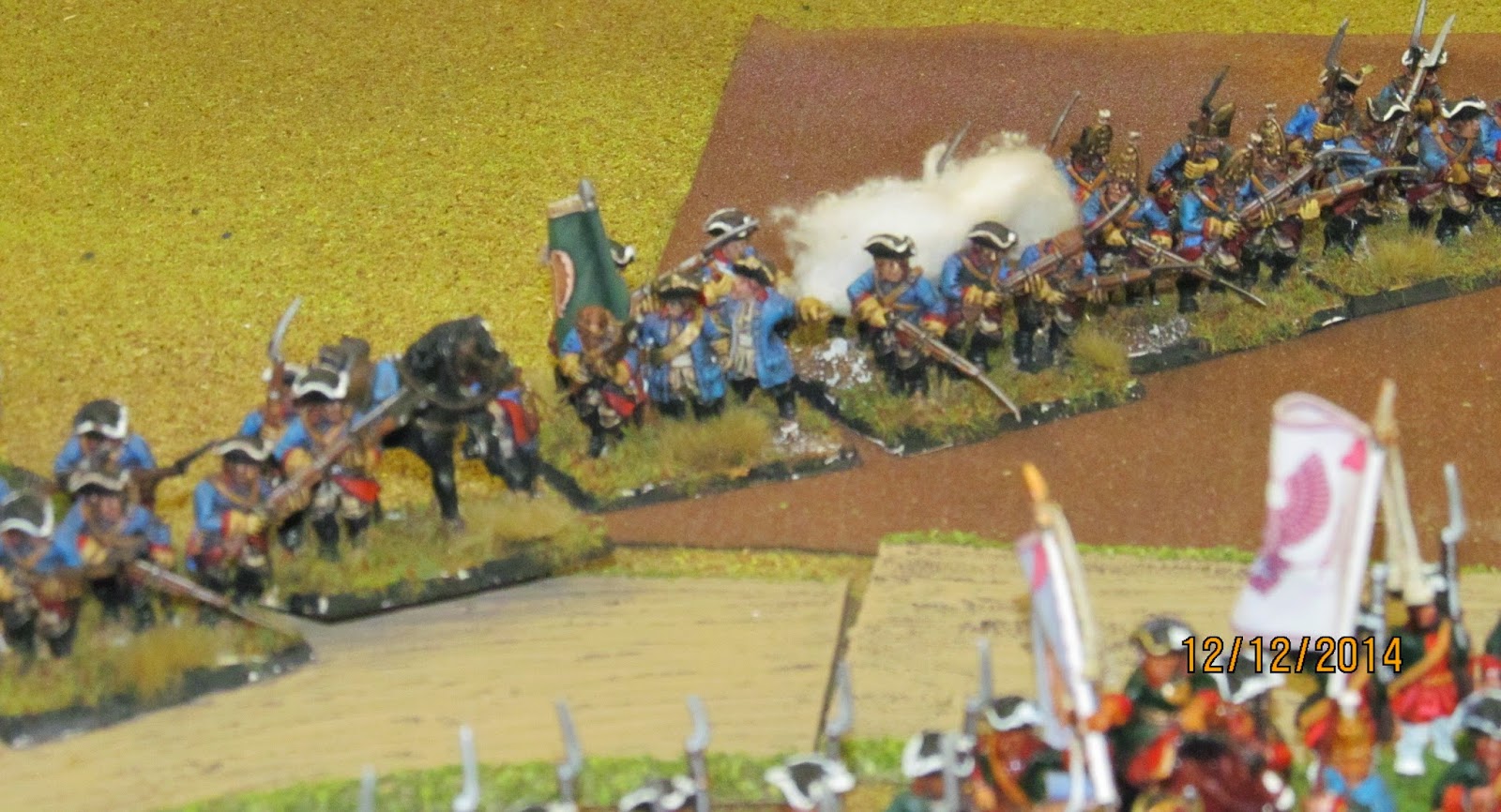 The Russian dismounted dragoon regiment bringing up the rear. Even when they had horses, the Russian Dragoons were badly mounted.

I enjoyed it as I actually won a game, the first one ever, with my Russian SYW army. John threw some amazingly dreadful dice scores throughout the entire game which hampered his plans more than a little. I managed quite a few blunders but they all went in more or less the right direction. I think the game was balanced about right. There were about the same number of troops, although the Russians had more guns. The Prussian commanders and most of their troops were much better than the Russians on paper but this didn't entirely manifest itself during the game.
Posted by Colin Ashton at 3:32 pm