Crimean interlude: Assault on the camp

John and his son Neil came up this week for an afternoon game. Neil had expressed in interest in playing a Crimean game using Black Powder so I was happy to oblige. I set up the scenario to give the Russians an immediate overwhelming numerical advantage at the start, with a thin screen of English and Turkish troops holding the camp area, the heights and an outlying redoubt, which would be reinforced each move by a randomly selected brigade of English infantry (up to a total of three).

John took the Allies while Neil and I split the Russians. When we threw for command levels the Russians managed the unthinkable, thanks to a series of very low throws. Neil's two infantry brigadiers were all 6's and his Hussar brigadier was a 7. I managed a 7 for one infantry brigade, my cossacks and my CinC; the rest were all 6's!!!!!! John's Turks were an 8 and his Heavy Brigade a 7. When they arrived his Guards' brigadier was another 7, the Highlanders' a 9 and his CinC a 7. 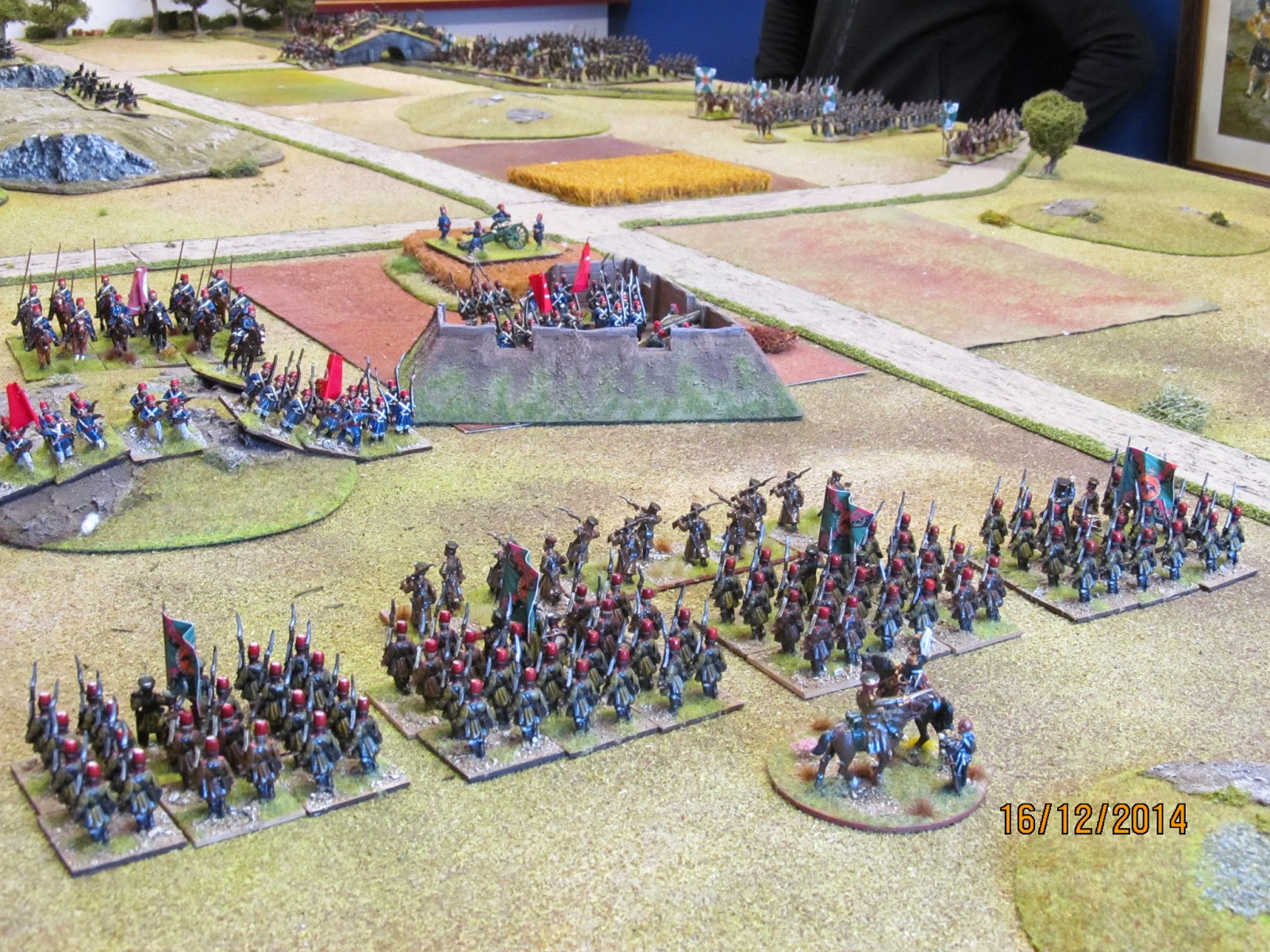 My lead Russian brigade (the Moskovski Regt) made a rapid advance towards the Turks. It was very unnerving.......for both sides! 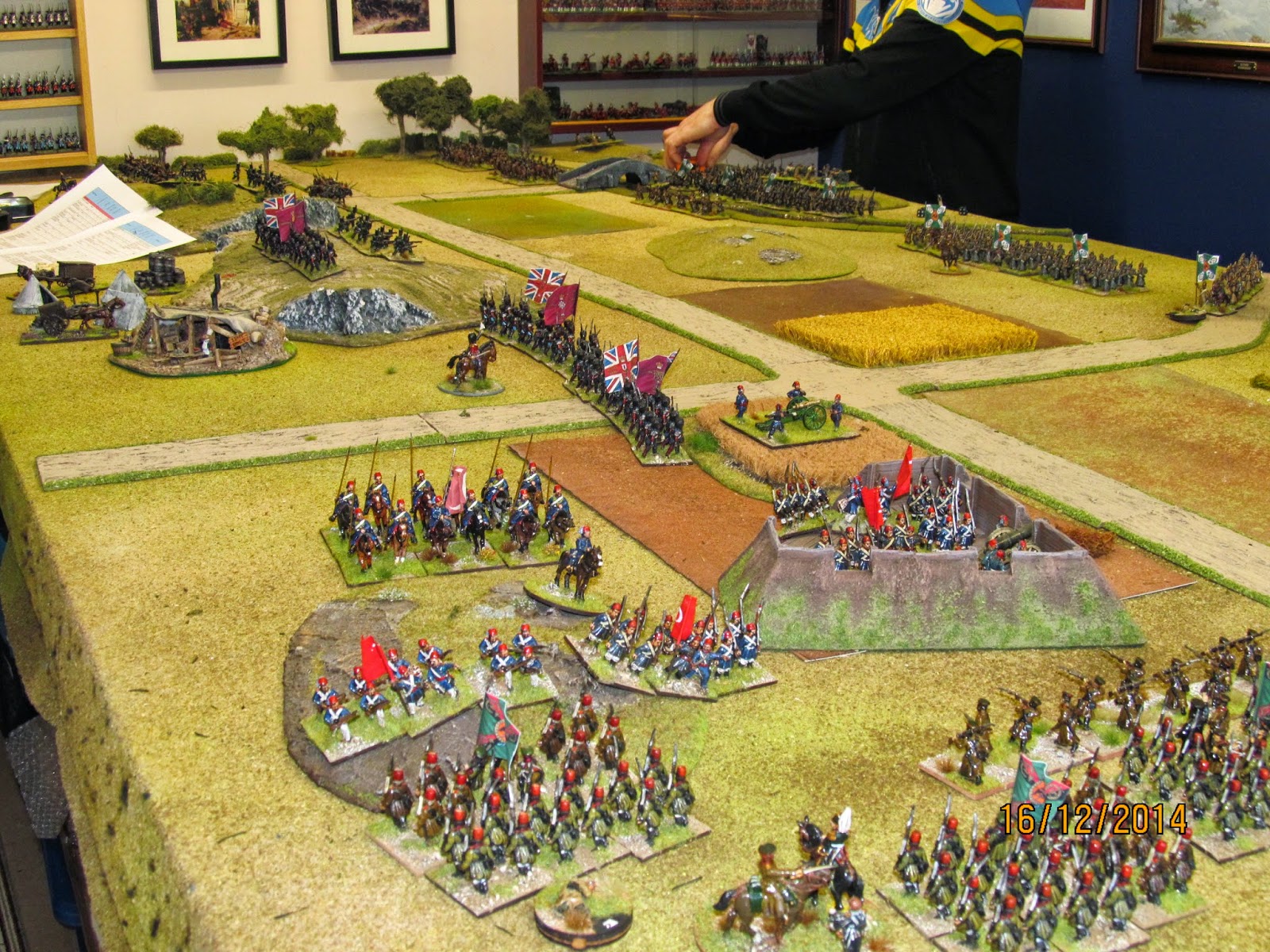 The Russians assault the Turkish positions and begin a two hour struggle to gain the redoubt! 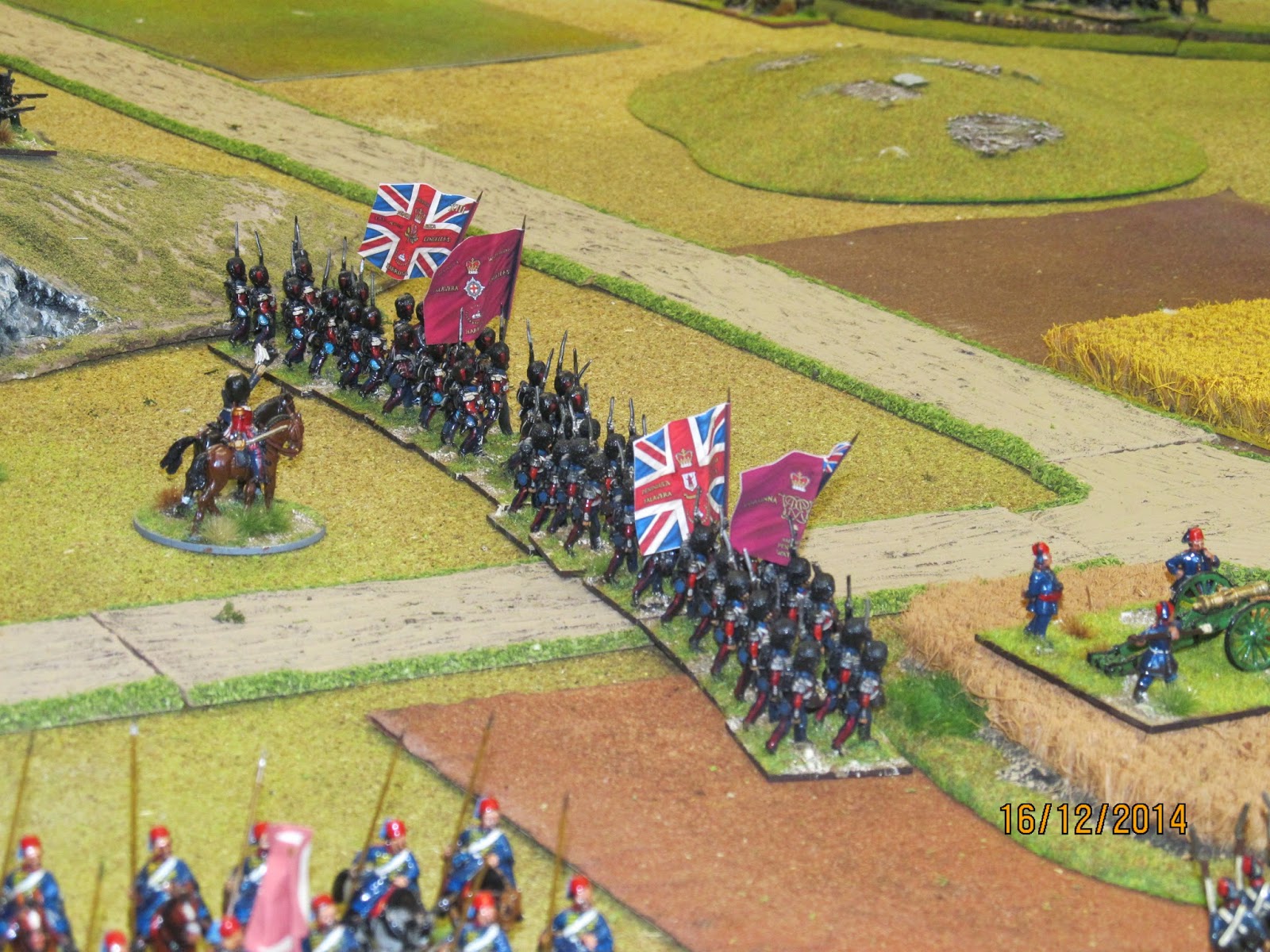 The Guards bolster up the Allied line. Their fight giant a brigade of Russians was valiant but they just couldn't hold on and in the end were forced to retire. 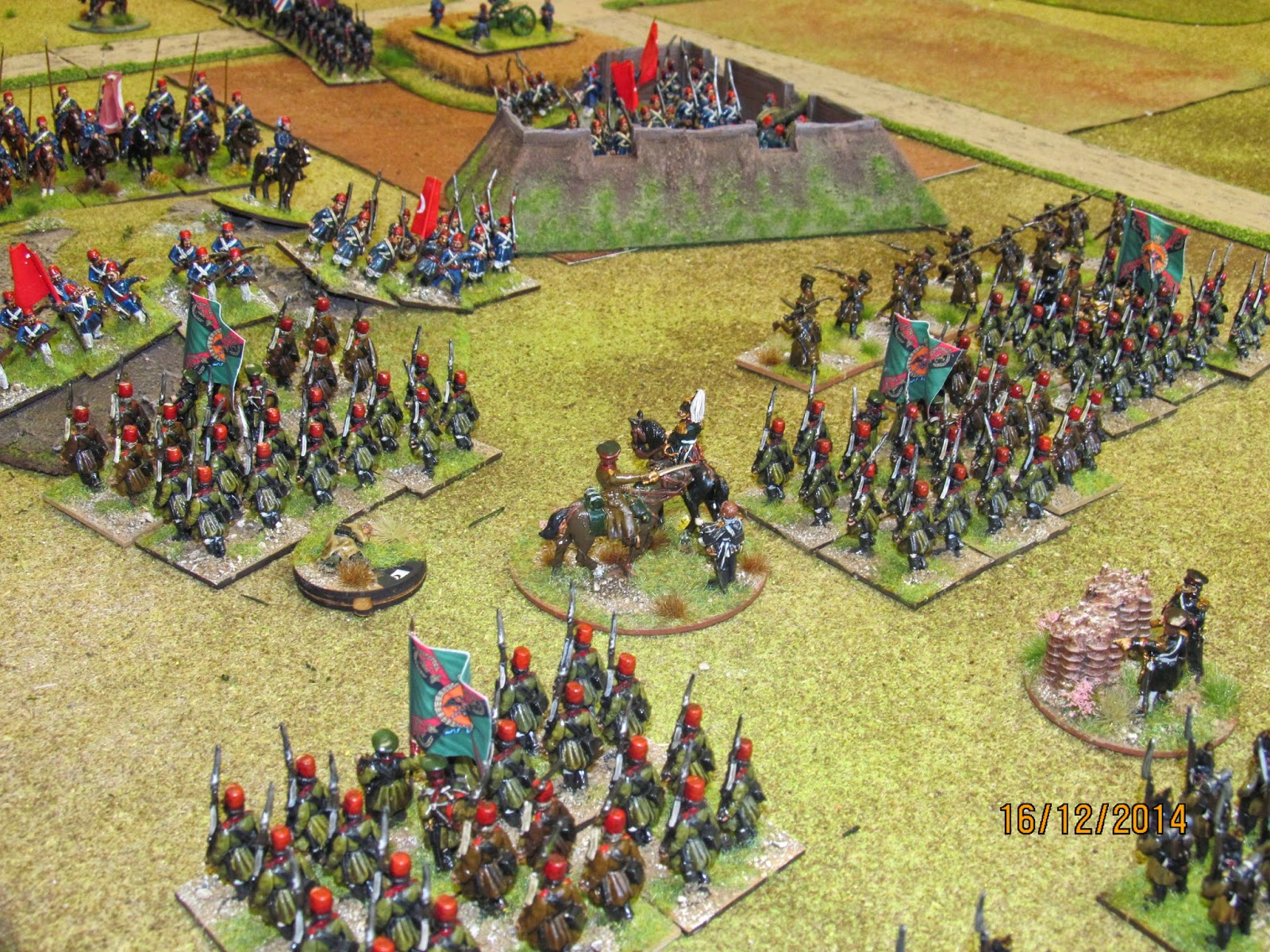 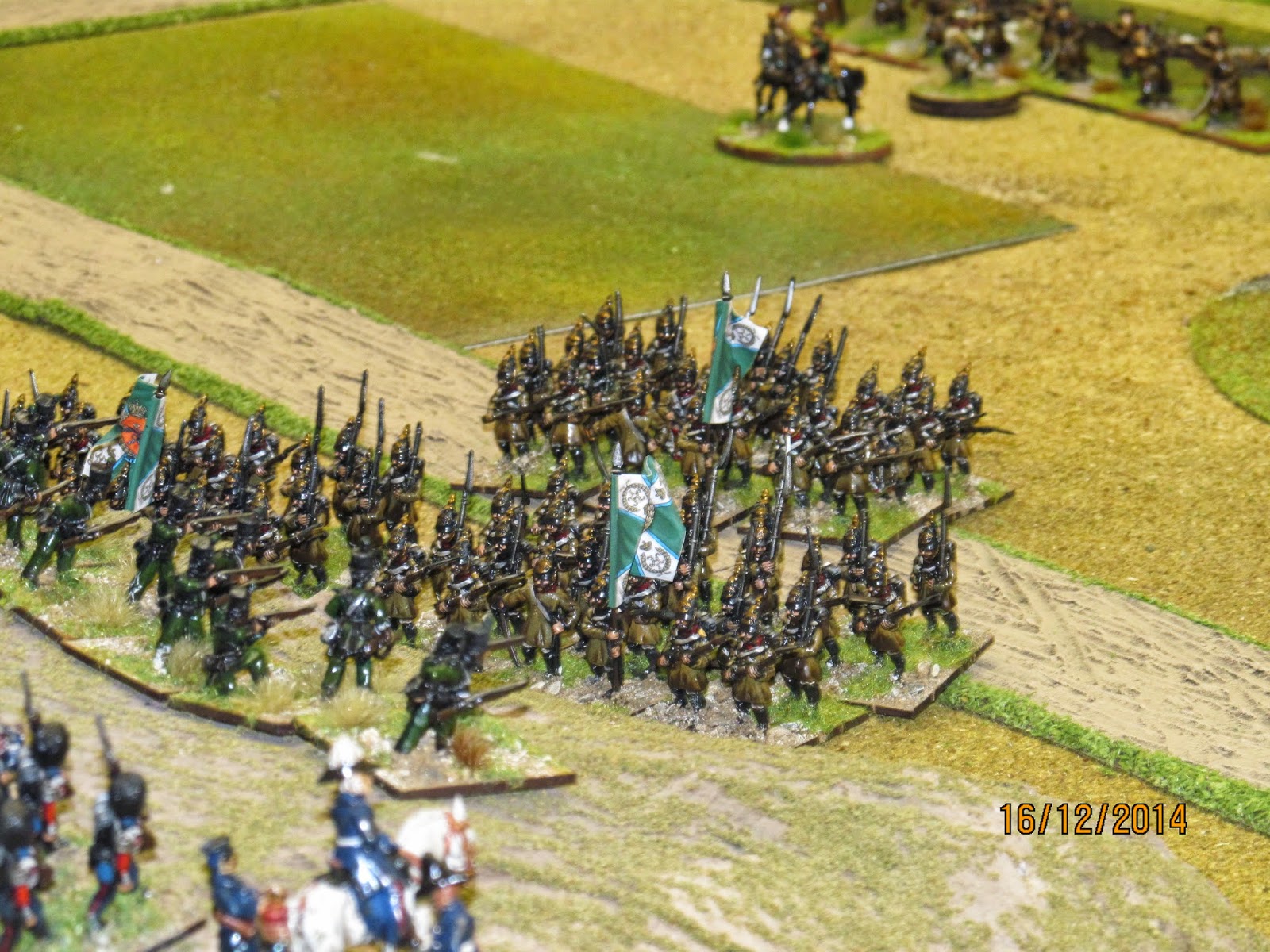 Neil's Russians clash with several companies of the Rifle Brigade, pushing them bacon the min line of English infantry. 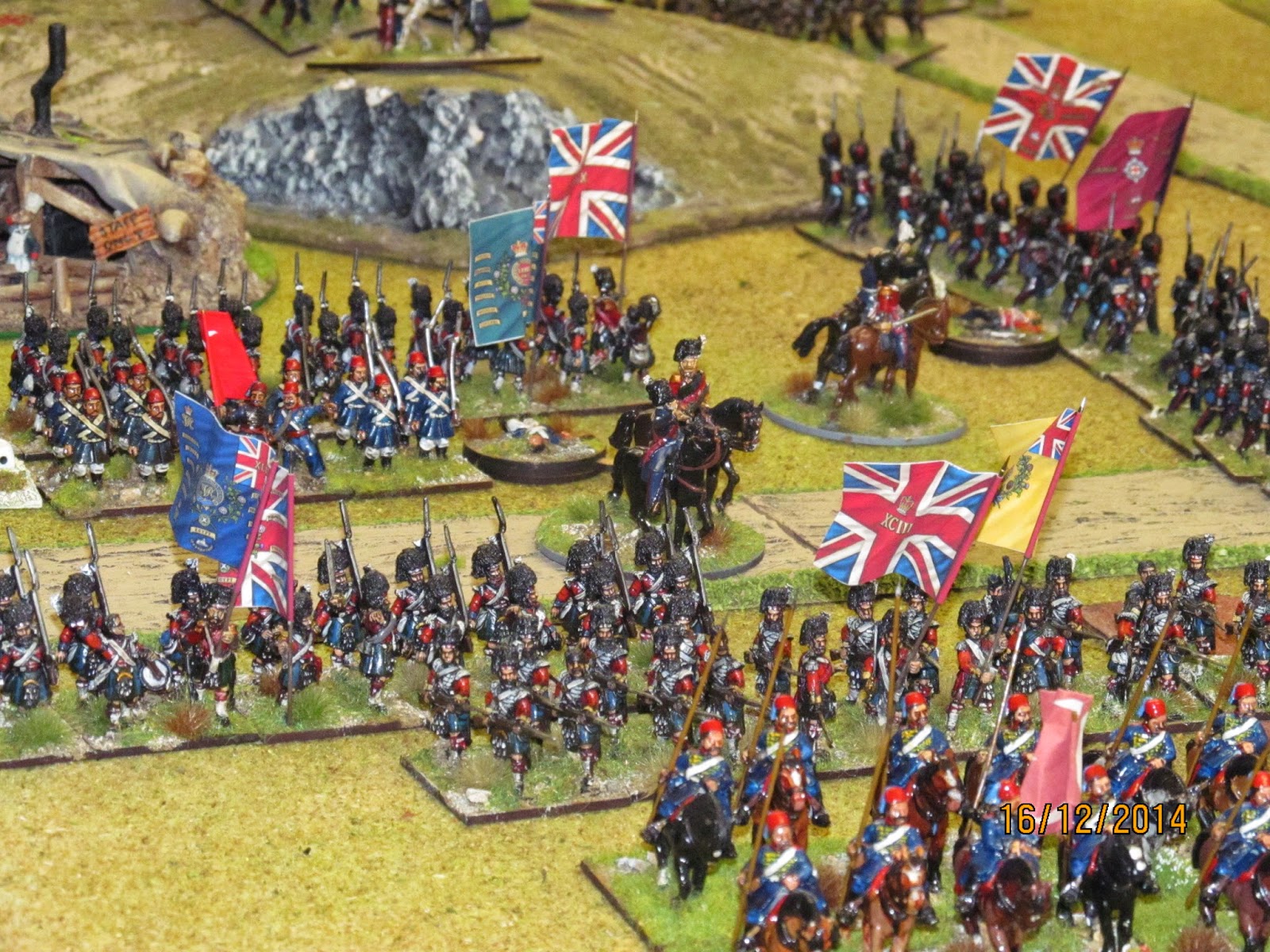 The Highland brigade under Sir Colin Campbell who was rated a '9' so by far the best general on the table. The Highlanders successfully held up the Russian advance supporting the Turks but in the end were forced to pull back after the Guards brigade was forced to retire. 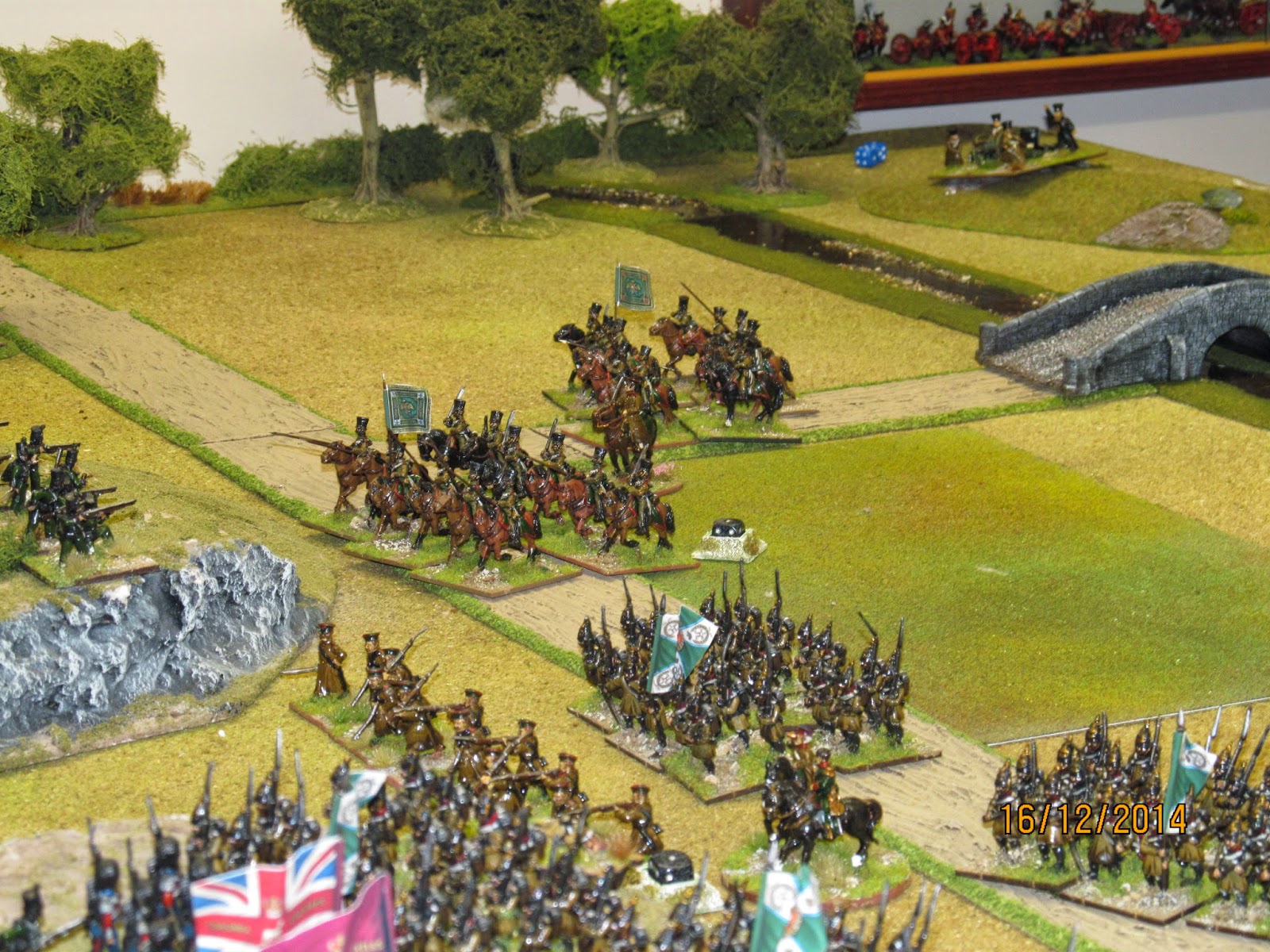 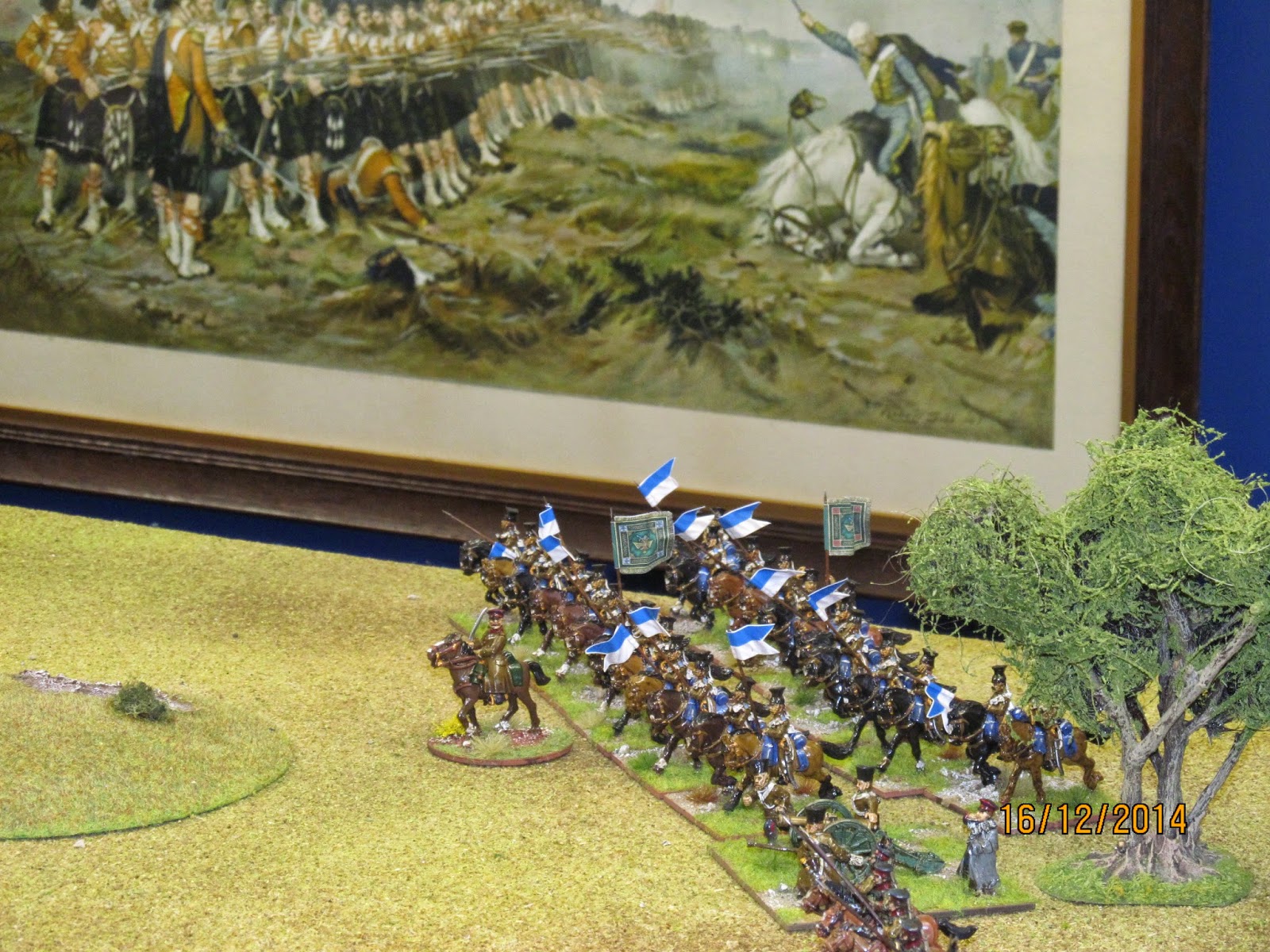 My useless Russian cavalry who took about 4 turns to actually appear on the table, at which point they rooted themselves to the ground and refused to budge. Knowing my plans for them they were probably very astute and may even have taken a look over their shoulders at the painting on the wall! 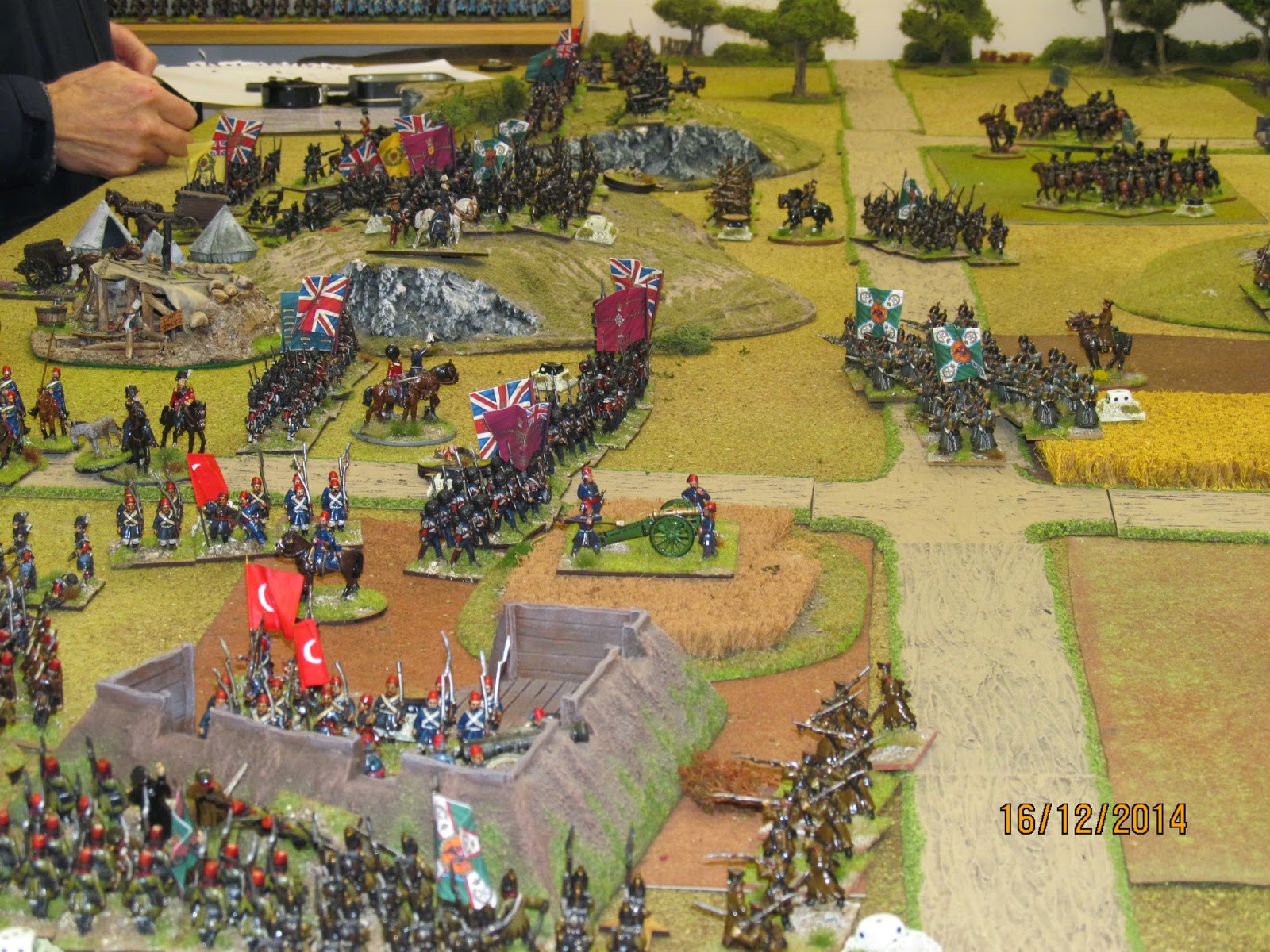 The Allied line still holding under increasing pressure from the Russians. 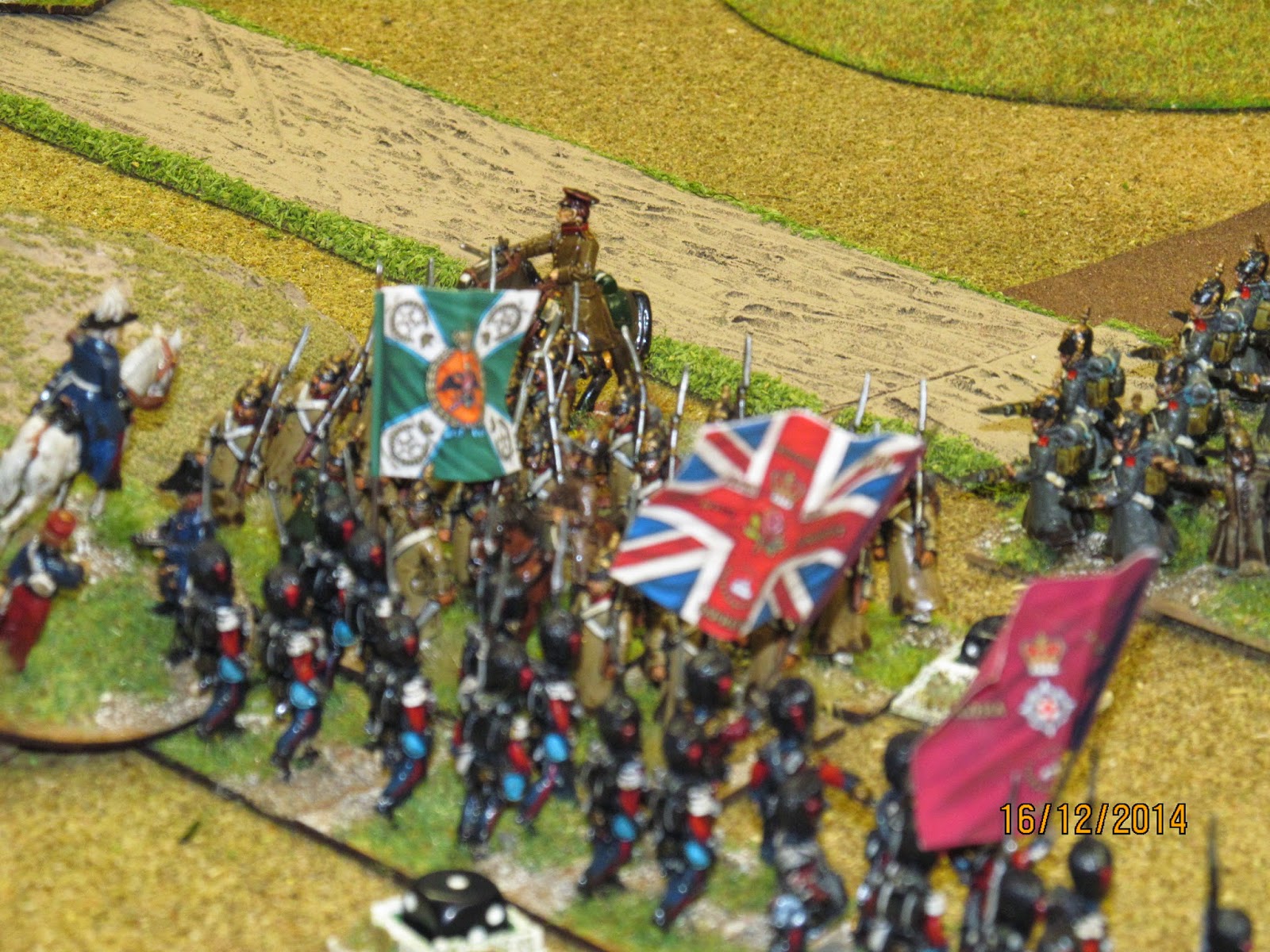 The Footguards about to buckle under intense pressure from the Russians. 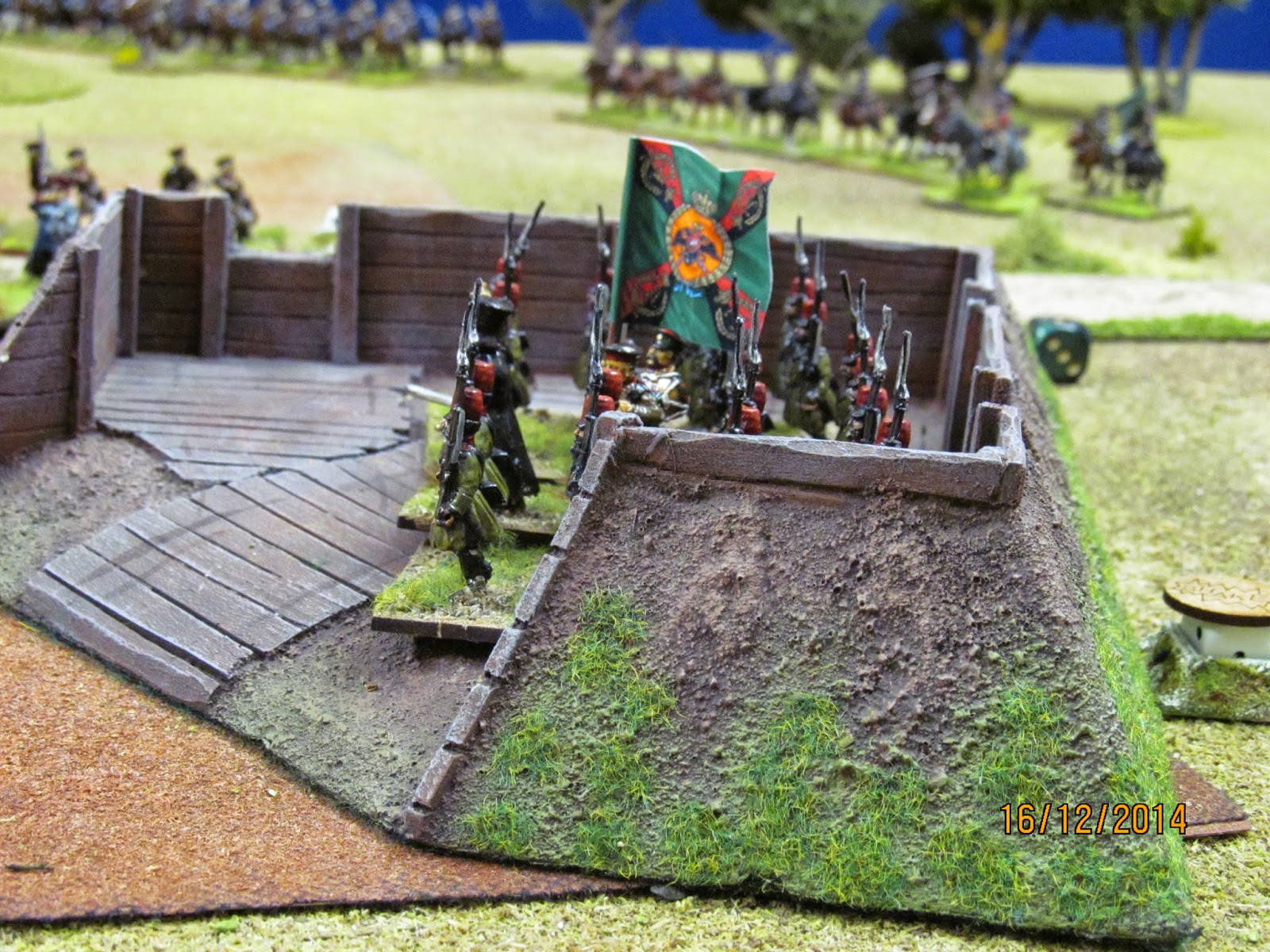 At last the pesky Turks were ejected from the redoubt, but it cost me a brigade of very pretty looking Russians to do it!

This was a hard fought slog. The Allies were able to slow up the Russians long enough to get their reinforcements on the table and even managed to catch one of Neil's precious heavy artillery batteries limbered up crossing the bridge. Despite such low command values we managed to get moving pretty quickly on my flank but it took a very long time to break the Turks and push back the Highlanders supporting them. A Turkish cavalry regiment even broke a Russian square before being bundled back in disorder when it tried again.

Neil was putting intense pressure on John's left and centre, which was about to buckle under the weight of numbers. However, a run of dreadful break tests by Neil saw his entire flank collapse. Game over really. Both sides had lost two brigades and were close to loosing another but we declared it a marginal Allied victory as they'd managed to hold onto the camp.  As usual the game was punctuated with blunders, fantastic saving rolls and dreadful/amazing command rolls, which is what makes these games such an enjoyable experience.

You can read Neil's version of the game with more photos on his blog here: