Another bad day for the BUF 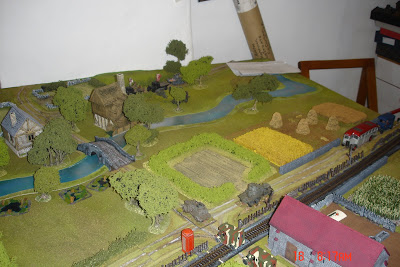 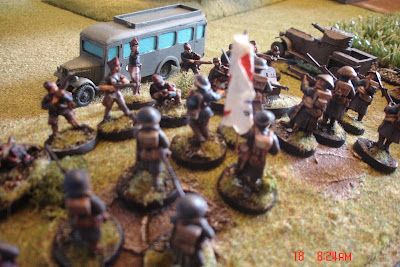 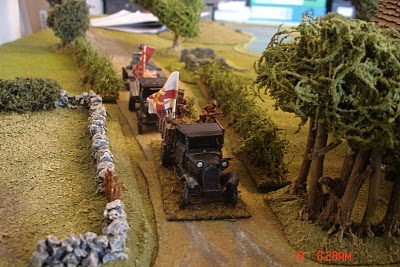 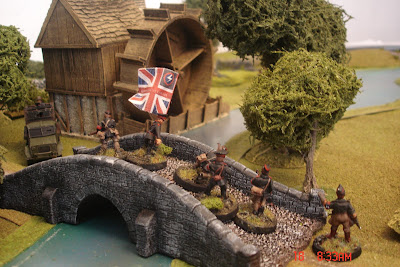 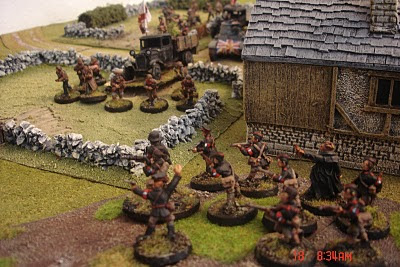 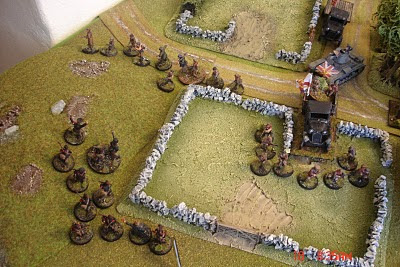 Just played another VBCW game. Rob commanded a BUF snatch squad charged with escaping off the table with their Anglican League prisoner, the firebrand Reverand Jesmond Parsnip, Vicar of Wolsingham. Closing in were a small force of League troops in pursuit from Wolsingham under the command of John, and allied Socialist Shildon Railwaymens' militia under myself en route from Fir Tree.
BUF forces were all motorised and comprised a headquarters section, a towed anti-tank gun, three platoons of infantry, supported by two armoured cars, a Morris and a 6x Lanchester. The Anglicans were in pursuit with an old WW1 vintage Rolls Royce armoured car, a platoon of the Bishop of Durham's Guard (from the Anthony Bek Company) supported by an HMG, and a platoon of Wolsingham School cadets. The Socialists had three platoons of militia, a Vickers 6-ton tank and an Armadillo armoured truck.
We used Triumph and Tragedy as the basis for the rules but much simplified. I used a random card-driven movement and firing system; one card in the deck for each unit, which worked well and added to the confusion....lots ;o)
The BUF were lucky with the draw of cards and most of their units moved early in the turn. Their Lanchester turned to head off the League forces heading towards them, shooting up the bus carrying the cadets and forcing it to stop, thus blocking the road. It was supported by a rearguard of a platoon of infantry and the anti-tank gun, that moved to outflank the League now bottled up on the road.. The BUF Morris and the other trucks with their prisoner headed for the exit point at the opposite end of the table, but not without demonstrating some really poor driving skills, one lorry running into the back of another, causing some damage and a dead passenger! Meanwhile the Socialist column raced towards the crossroads to cut off the BUF escape. Exciting stuff!!!!!!
Next turn saw the BUF rearguard de-bus and take up position on a hill to enfilade the League forces, but not before the League Rolls Royce armoured car had broken through behind them. A vicious firefight followed by a bayonet charge by the Bishop of Durham's guard and the BUF were driven off and almost anihilated. But between them and the Lanchester they had blocked the advance of the entire League contingent and caused several casualties, including Wolsingham's Head Boy in command of the cadets.
The BUF and Socialists continued their race for the crossroads and the road to safety; the latter got there first. Just. One BUF platoon was dropped off to hold the flank while the Morris and the final platoon (together with prisoner) sped over the bridge at full speed and halted at the Old Mill. The Lanchester acted as rearguard, bottling up the League force, but it came a cropper when reversing at high speed round a bend, ending up in a ditch!
Finding the crossroads occupied the Morris armoured car could not get past the Socialist vehicles blocking the road, and had all its tyres shot out and the Boyes anti-tank gun destroyed. But it kept the much of the Socialist infantry pinned down, immobilising one truck and the Armadillo, while the last BUF platoon disembarked and tried to escape on foot behind the mill and across the fields and behind walls and hedges. The BUF flank guard retired under heavy fire onto the bridge where firstly they were pinned down, suffering heavy casualties before legging it in rout.
The BUF almost made it off the table with their prisoner, but the final Socialist platoon cut them off and pinned them down in the open just inches from their exit point. The BUF force had been almost totally destroyed as a fighting force, only the Lanchester was in a position to escape. League and Socialist forces had suffered heavy casualties, and most of their transport was shot up badly.
An enjoyable and hard fought game that could have gone either way right up to the last turn of the cards, and was almost a rare BUF victory, but not quite. A BUF triumph it wasn't; more like a BUF tragedy! An early good run of the cards had put Rob in an advantageous position, and John and the League couldn't get into the game once they'd seen off the rearguard, but the situation changed rapidly, enabling the Socialists to get into position. The BUF's fortune wasn't helped by some really unlucky dice rolls, e.g. most BUF hits seemed to result in few kills or wounds, just pinned or 'near misses', whereas the League and Socialists seemed to score kill after kill.
By Colin Ashton - July 29, 2010