Return to the Seven Years War

My old friend Paul came up the other day for a game. We both used to be in the Durham club many many years ago and then we set up the Durham Old Boys with John Ingleby for a couple of years putting on games at shows in the late 80's and early 90's but I don't think we'd played a wargame together for maybe 20 or so years! Paul was always keen on the SYW so I dug out my 28mm Russians and Prussians, gave them a good dusting off and set up a game. 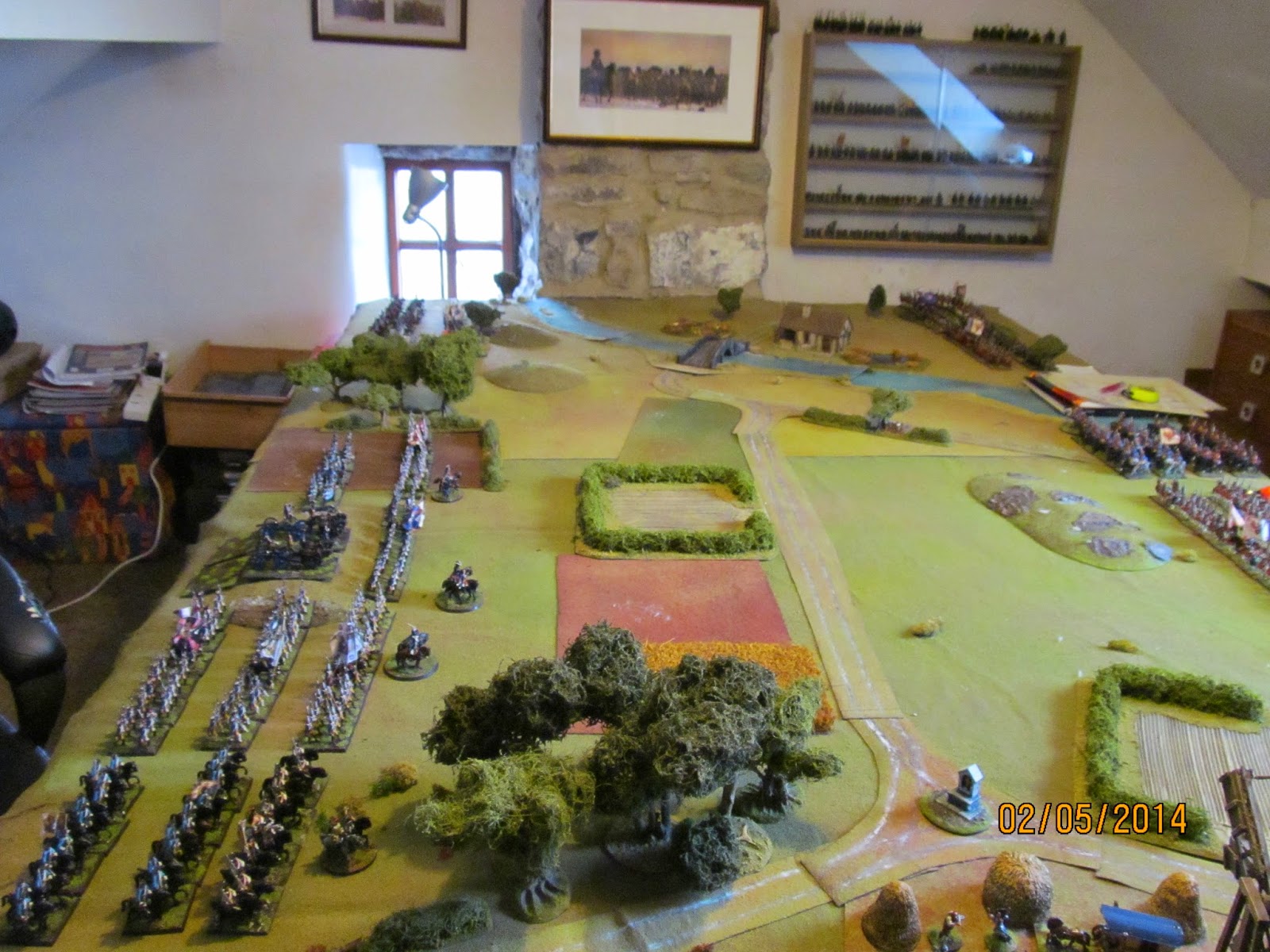 They also had 3 heavy guns, 2 units of hussars and a unit of Cossacks.

2 heavy guns and 2 units of hussars.

My infantry are organised in 36 figure battalions and the cavalry in 24's or 36's so we kept the infantry as they were but the cavalry were fielded as 'squadrons' of 12 figures. We used Black Powder with the amendments and unit specifications from LAoK. This made the Prussians quite (potentially) deadly in terms of firing and getting around the table and while the Russians might suffer from poor command they were very tough and hard to kill. Russian cavalry were poorly mounted in the SYW so they were weaker than their Prussian opponents. 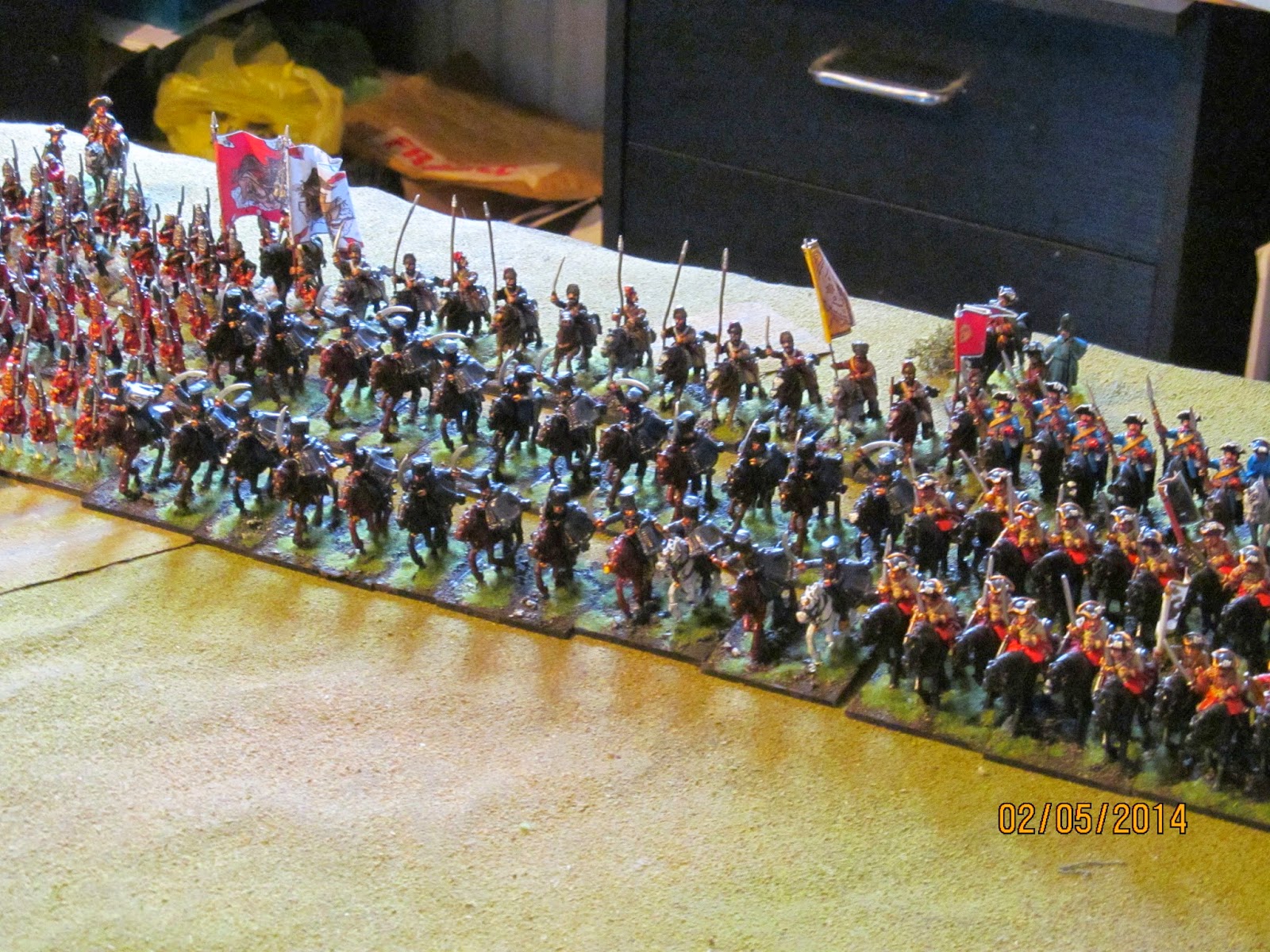 (Above and below: Russian left flank cavalry) 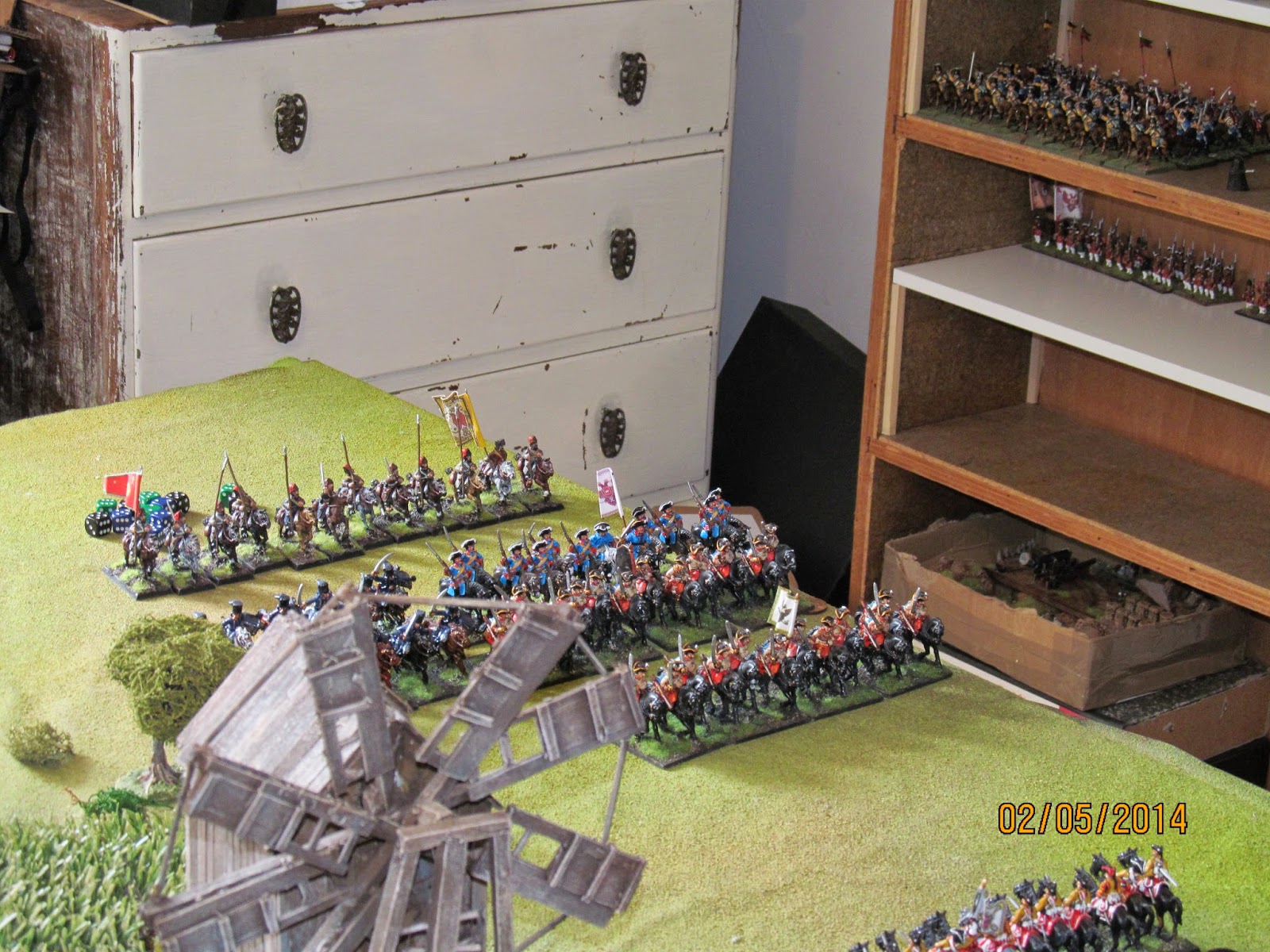 The scenario was simple. Three objectives: the bridge, the crossroads and of course stuff the enemy! The only terrain features that would impact on movement or visibility were the hills, woods and the river. All other items were there for esoteric and visual reasons only.  We diced for sides and Paul got the Russians. He deployed his weaker cavalry brigade and his Cossacks and hussars on his left flank. The artillery were brigaded on the hill in the centre. The grenadier infantry brigade was on the left centre with another infantry brigade on their right. The second cavalry brigade (the strong one) was deployed on the right of centre while the final infantry brigade was over the river on the right. I deployed my Cuirassiers brigade on my right with two infantry brigades and the artillery in the centre. One of these was the stronger one containing the Guards and a unit of grenadiers and the other clouded a Friekorps battalion. I deployed my remaining forces, one brigade each of infantry and cavalry plus the hussars on the left. 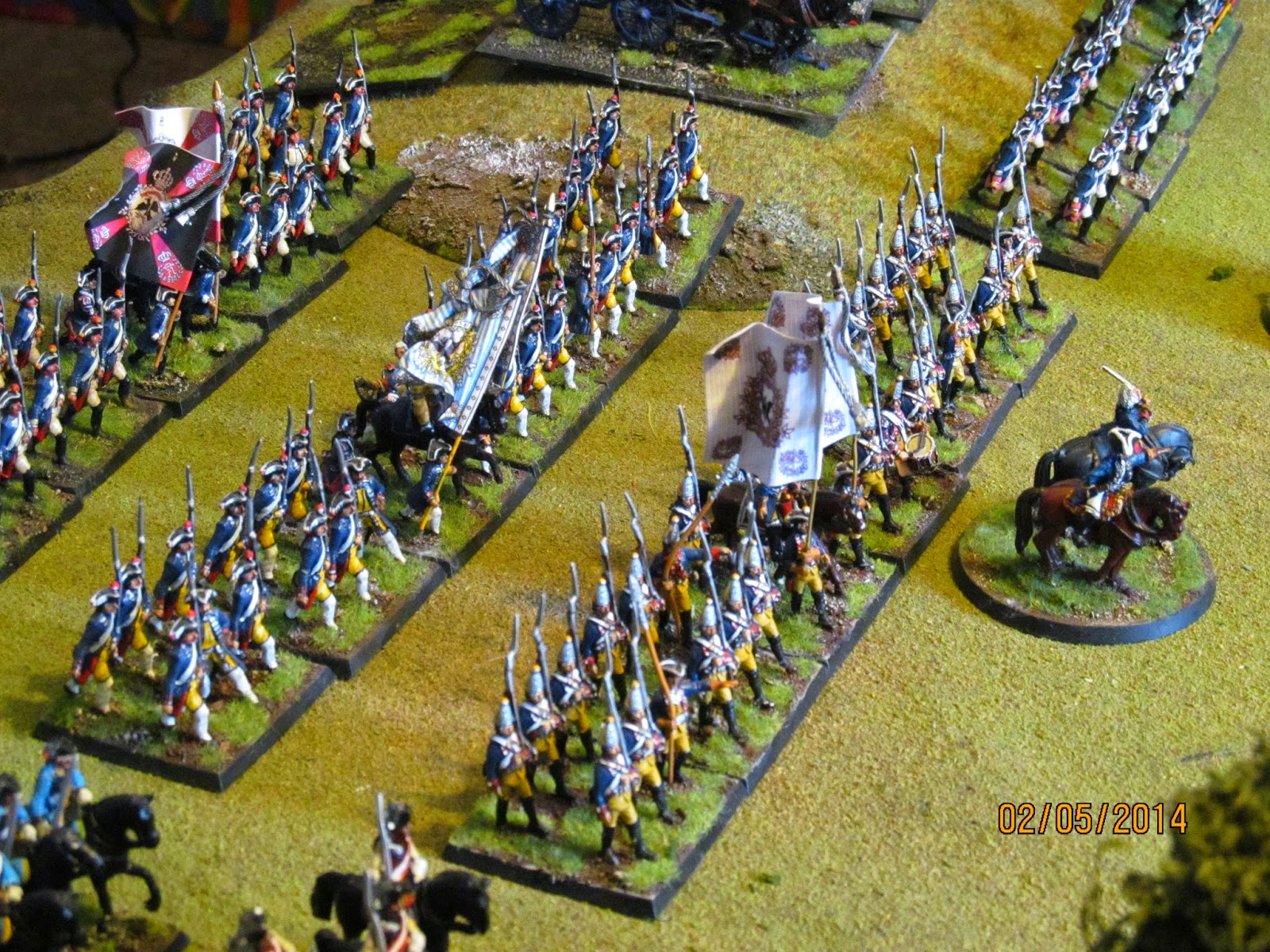 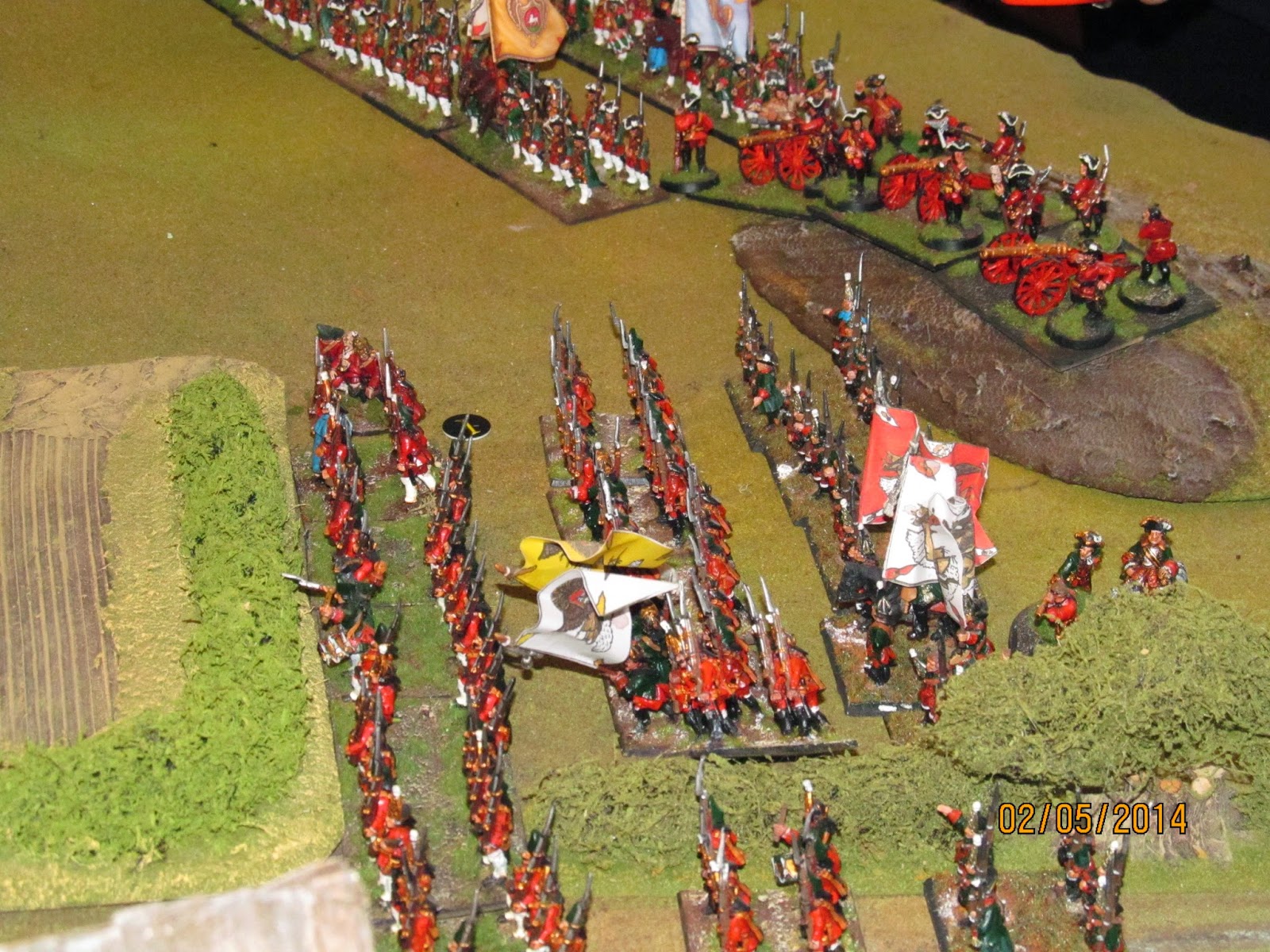 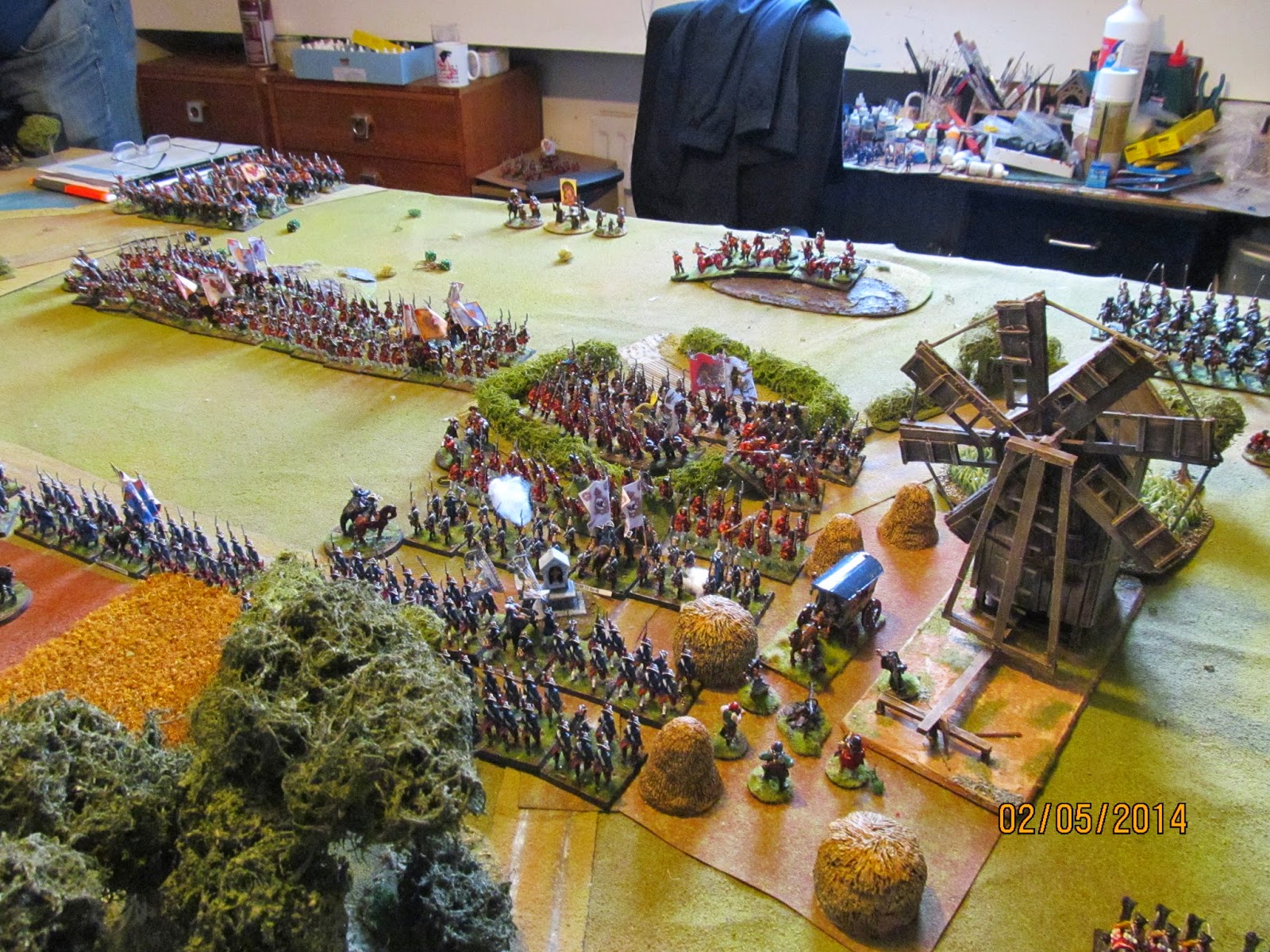 (Above and below: the struggle in the centre around the windmill) 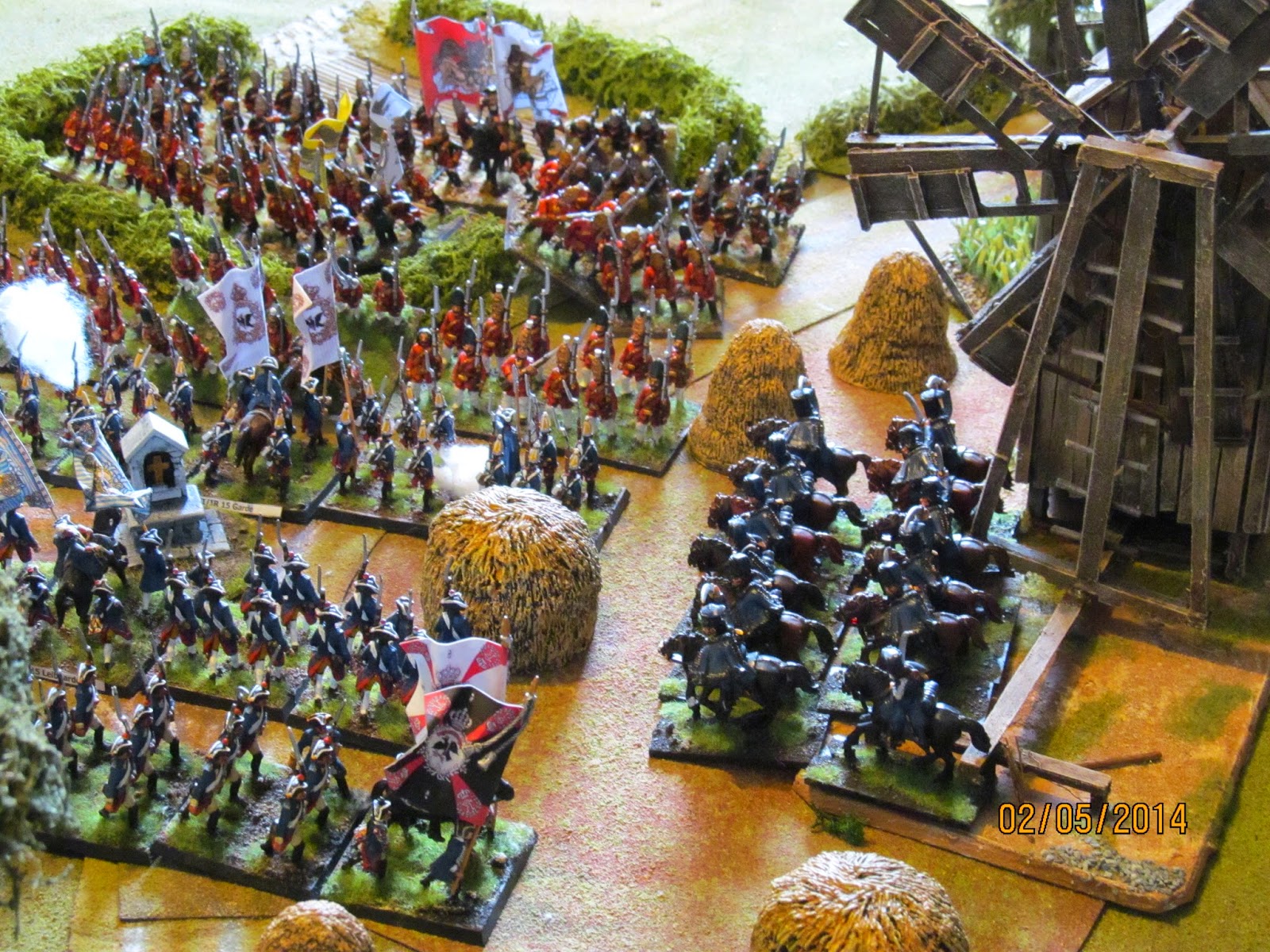 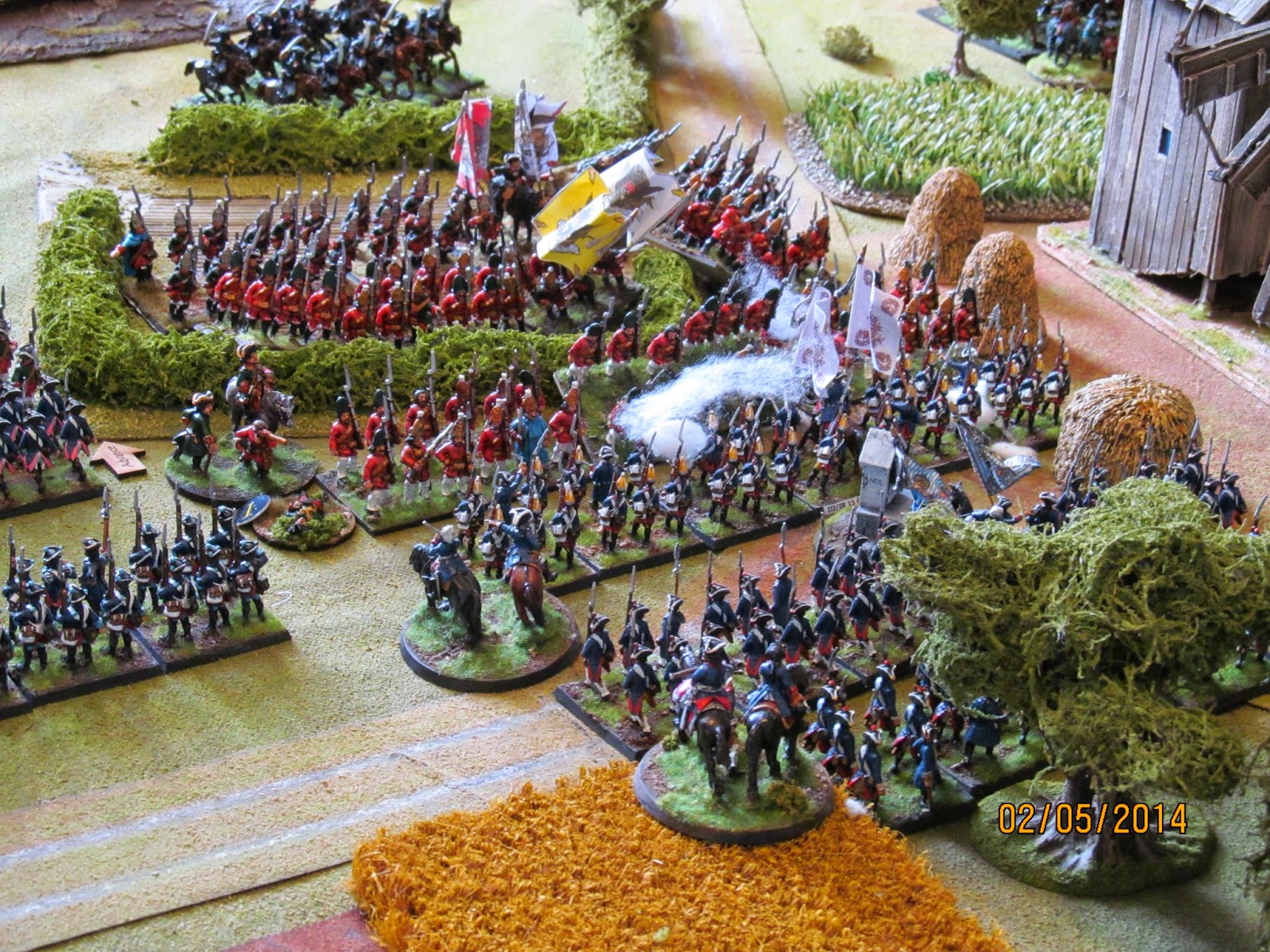 The game turned out to be a very bloody and hard fought slog. The Russians enjoyed some early success on my right with their cavalry but in the end my Cuirassiers were able to grind their Russian counterparts down, although this was slowed down by some pretty poor saving rolls on my part and some amazing ones from Paul.  Paul had to throw in his hussars and Cossacks in order to slow my advance down and threaten the flank of my infantry in the centre, which did work well for a little while but in the end they were driven off. 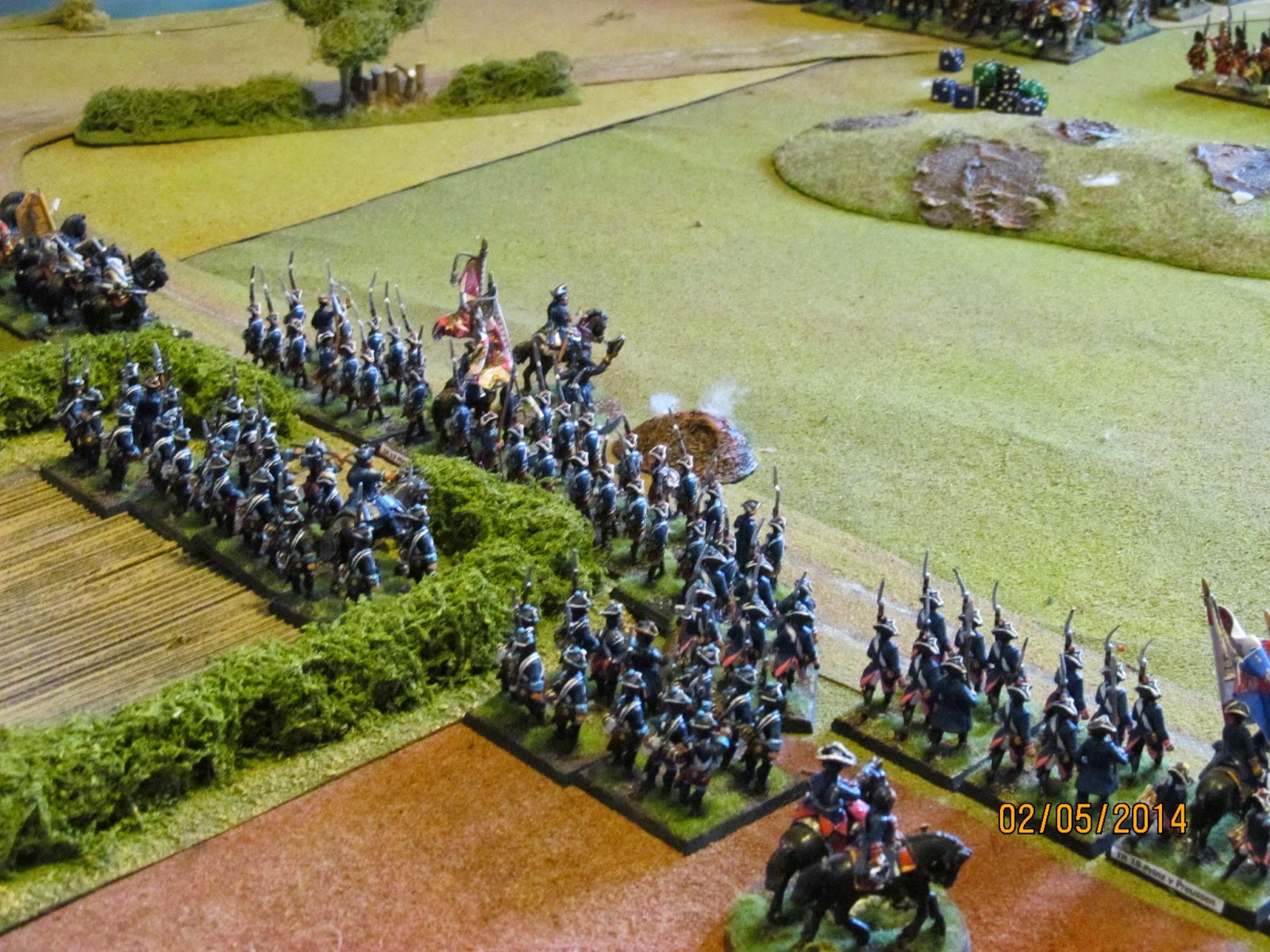 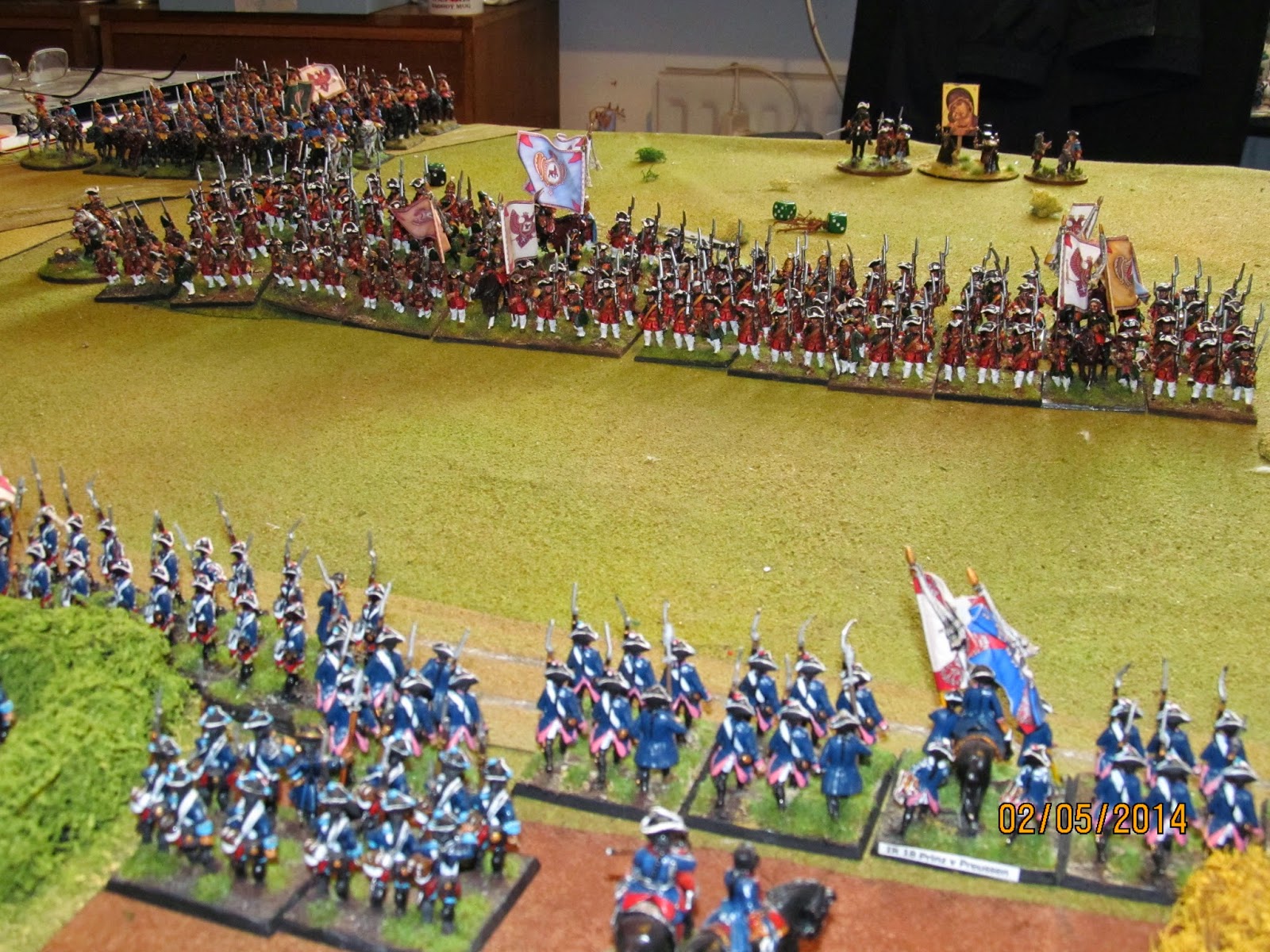 In the centre my infantry, despite a blunder or two on the way, made straight for the Russian centre. We engaged in a serious firefight, which was to my advantage. In the end Paul reckoned that cold steel would be a better option given the Prussian superior firepower (potential) and charged his infantry into contact. We then enjoyed (?) several turns of furious hand-to-hand combat. The Russians were on the verge of winning these thanks to being stubborn which gave them a re-roll on one failed morale test every turn. Thankfully I survived some potentially battle loosing break tests and held on despite having several shaken units. Eventually some of the Russians began to falter, withdraw or break. Black Powder can be pretty bloody and unforgiving if poor dice are rolled, and this is what happened to Paul with a couple of his units in the centre. Sadly in the last move my tough brigade containing the Guards and grenadiers became shaken and would have been forced to withdraw. 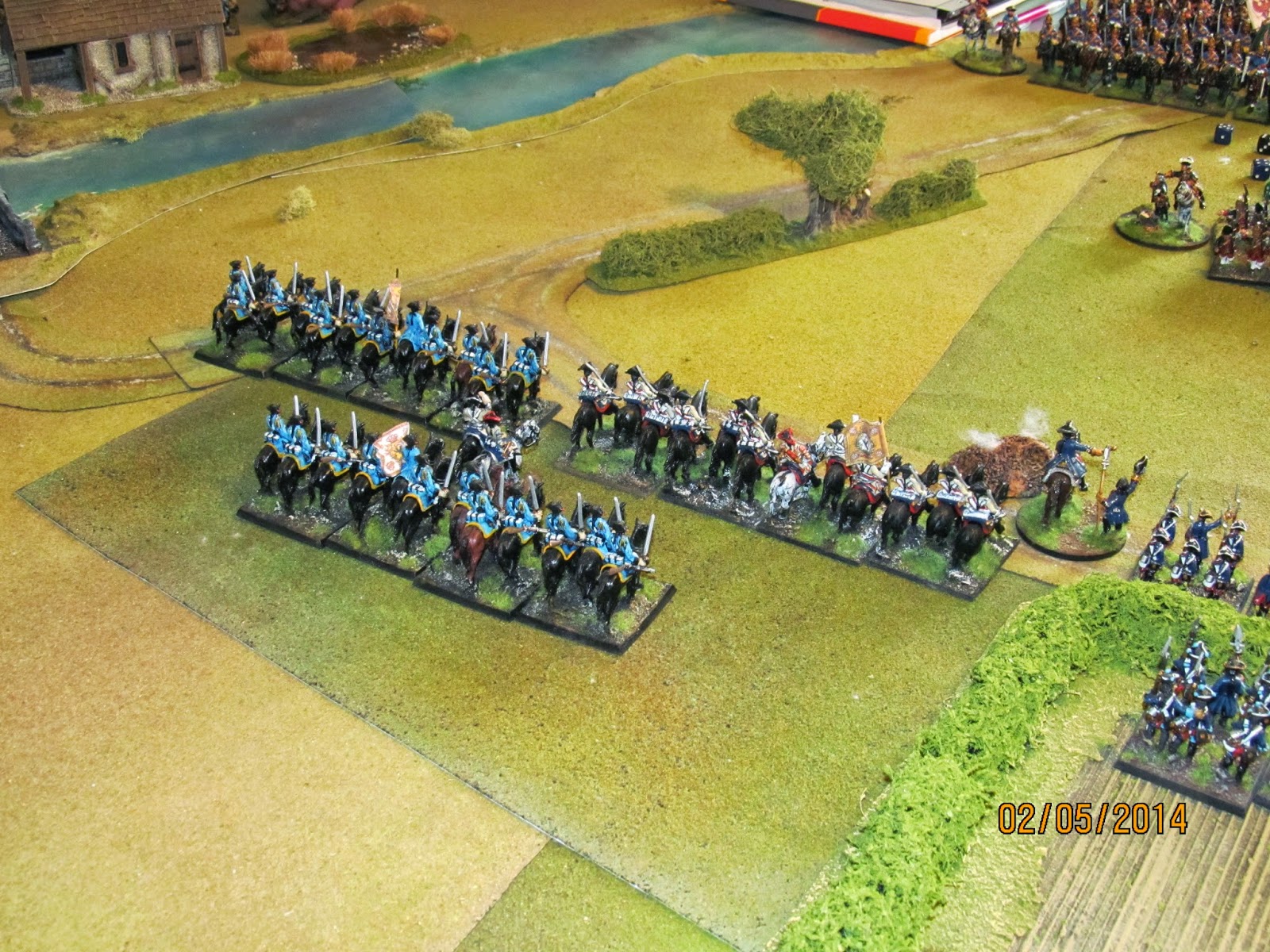 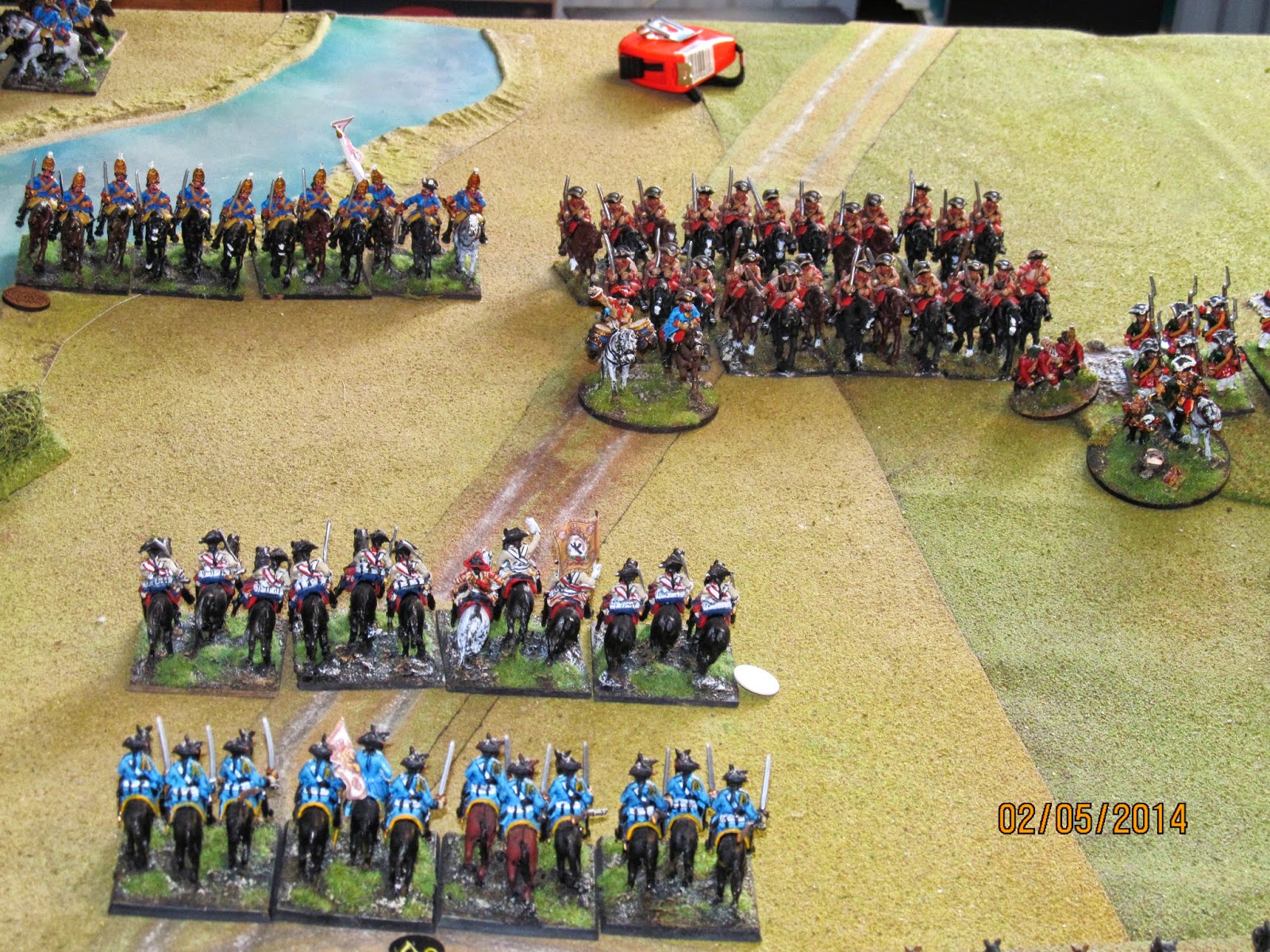 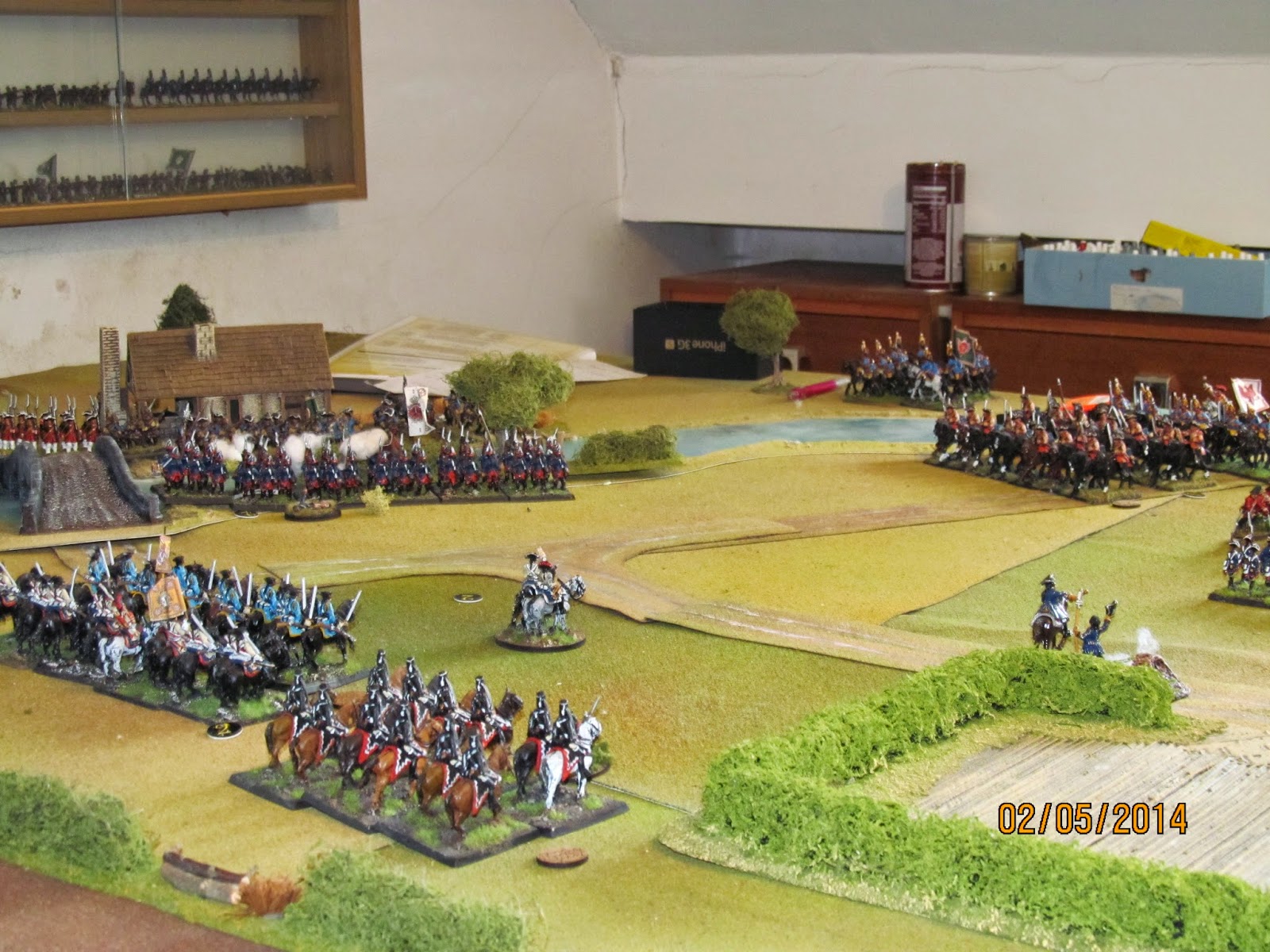 Meanwhile, on my left the cavalry clashed with the Russians who gained the upper hand to start with. I had rather foolishly exposed the flank of my infantry facing the Russians across the river but thankfully the Russians were either fully engaged or the brigade was classed as spent and prevented from offensive action. One of my hussar units blundered and absented themselves from the table for several moves (I forgot to try and get them back so that was my fault!). Paul sent his surviving Hussars from the opposite flank to try snd plug the gap but they were beaten by my recently returned hussars. The cavalry fight ended up with both the Prussian and Russian brigades becoming 'spent' due to the number of broken and shaken units which effectively removed both from the battle. 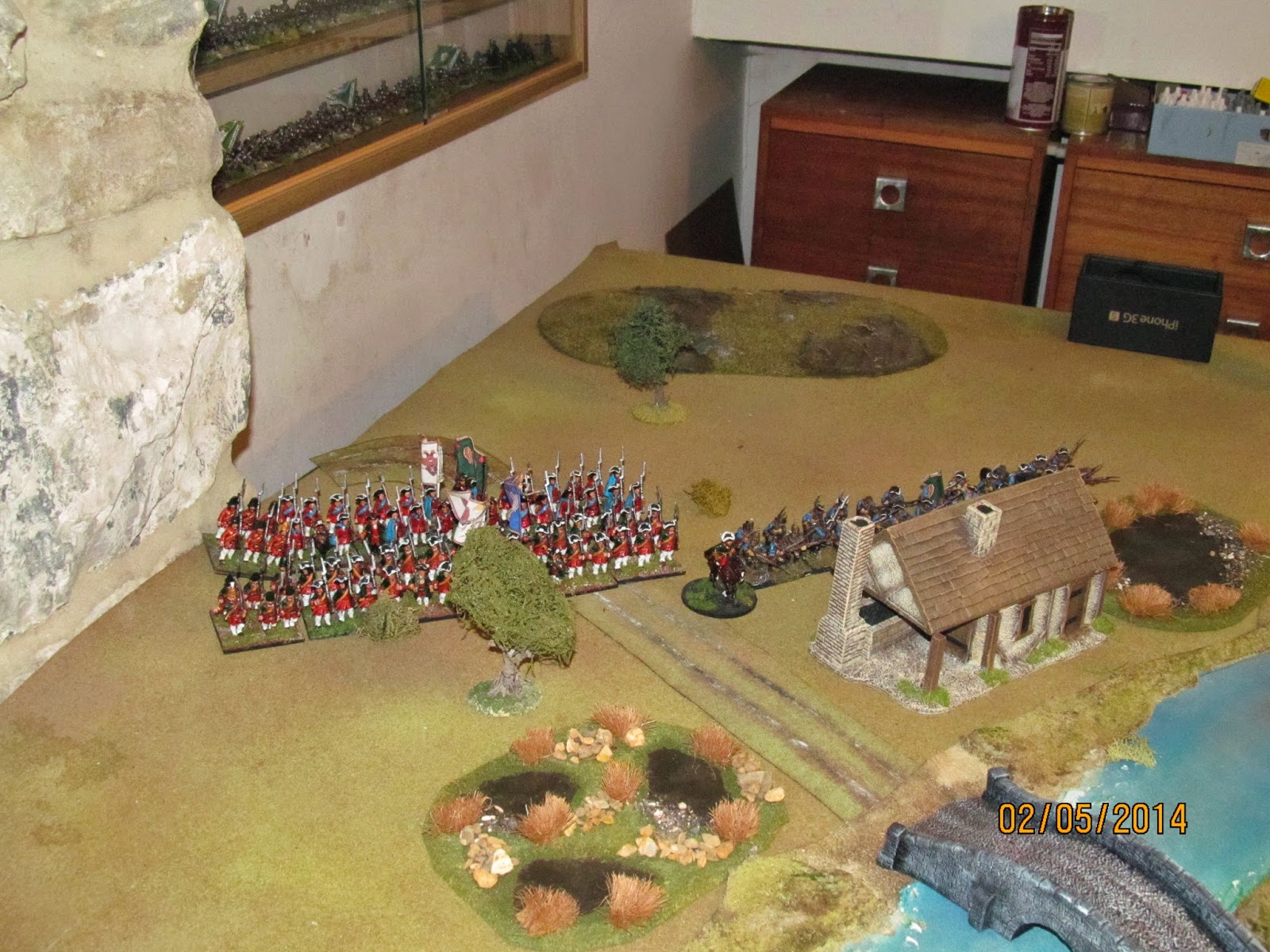 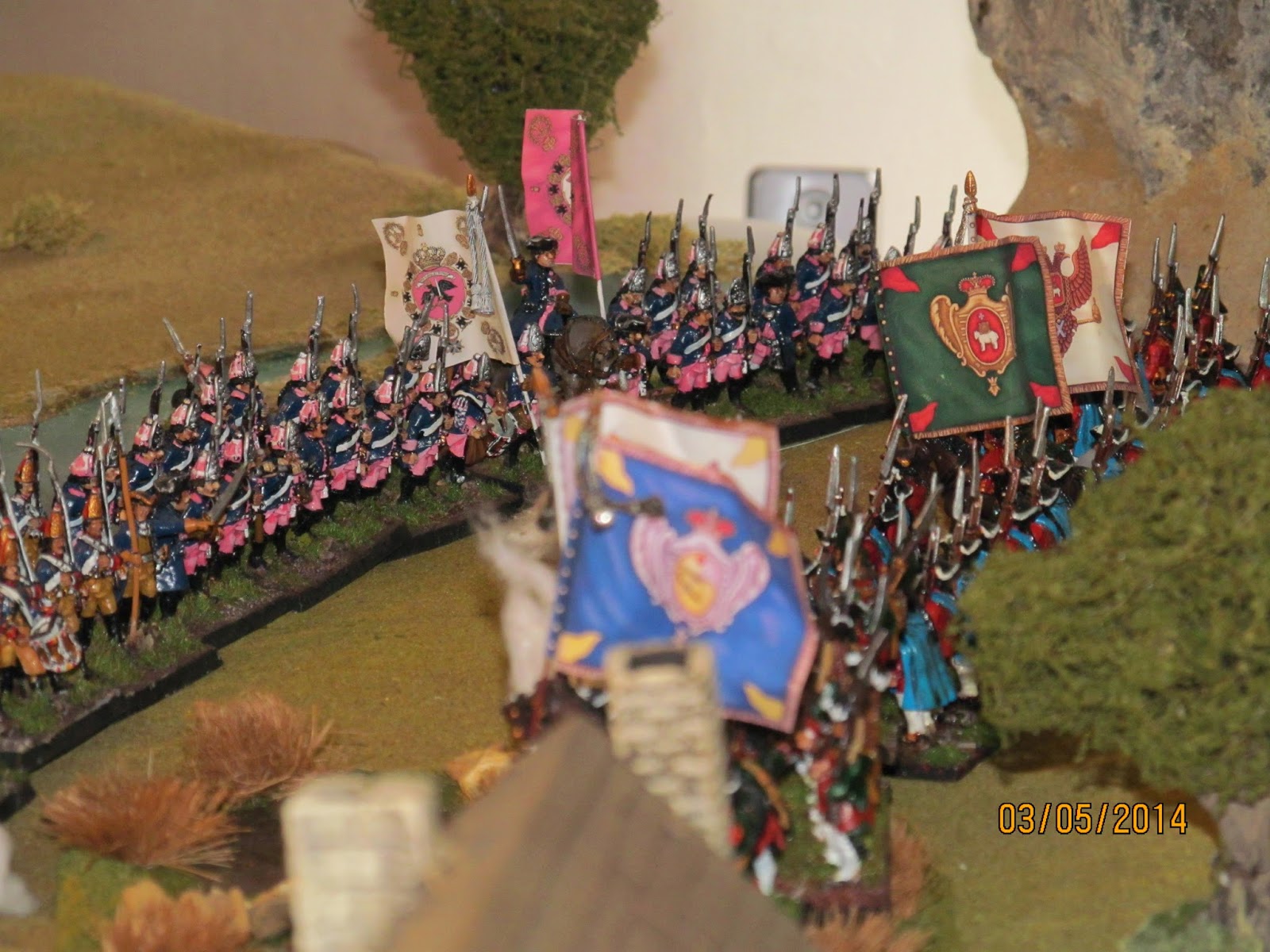 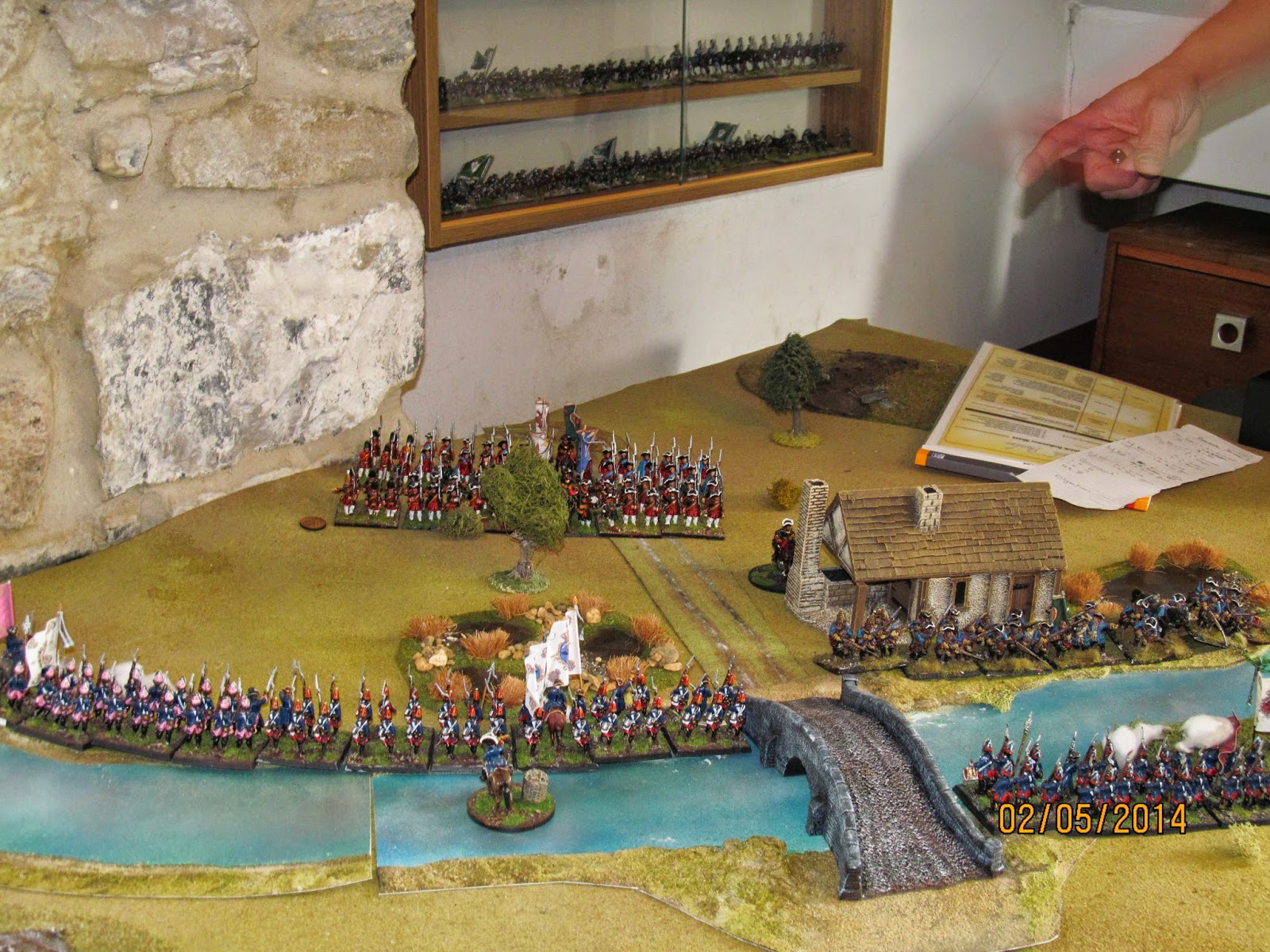 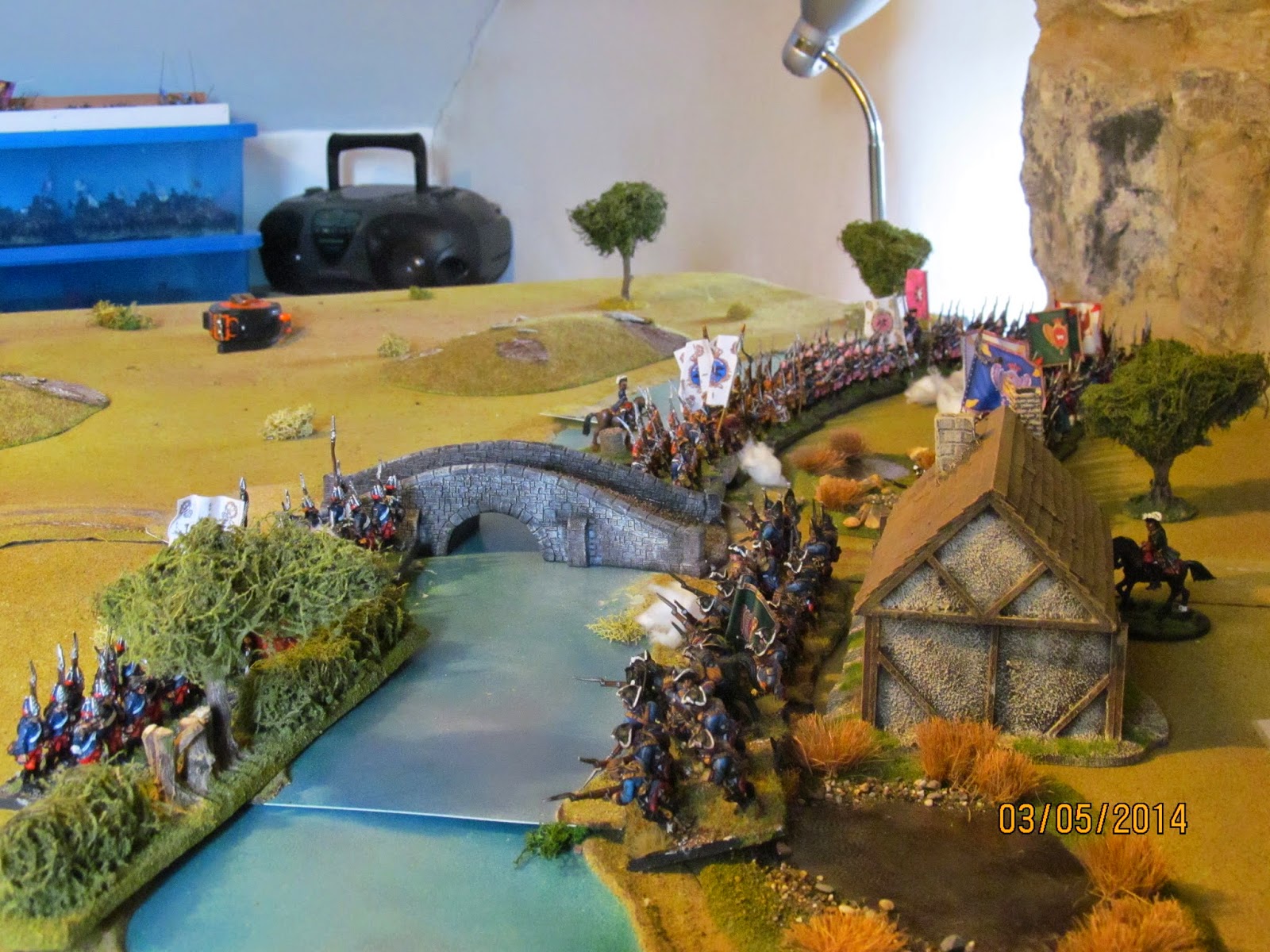 My infantry made it to the river and crossed it, engaging in a firefight with the Russian infantry, which had been slow to get into action due to some low command rolls. Neither side was going to get anywhere as the superior Prussian firepower (I gave them the platoon fire rule gaining an extra dice for firing) was more than balanced by the stubborn Russian infantry. 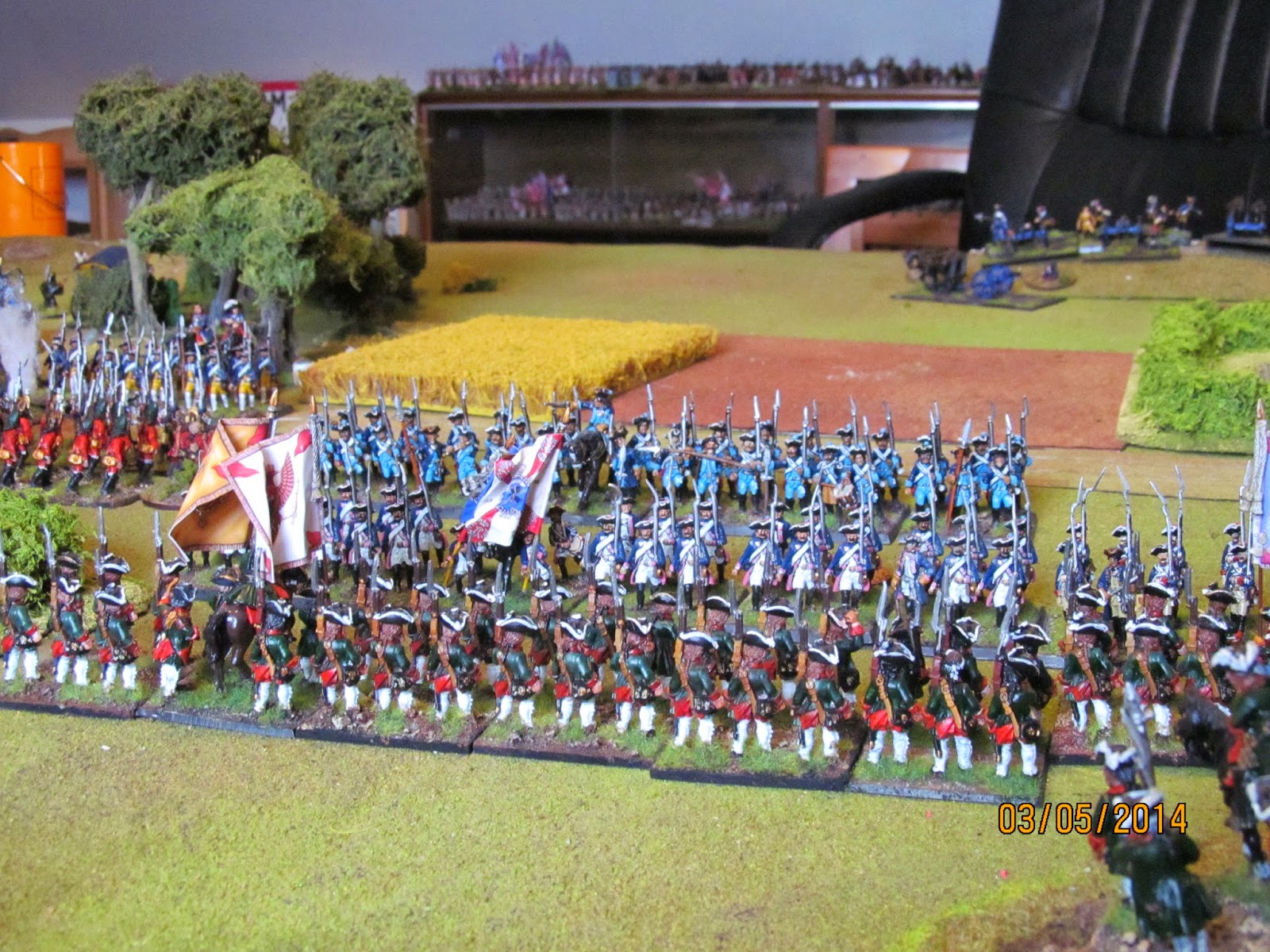 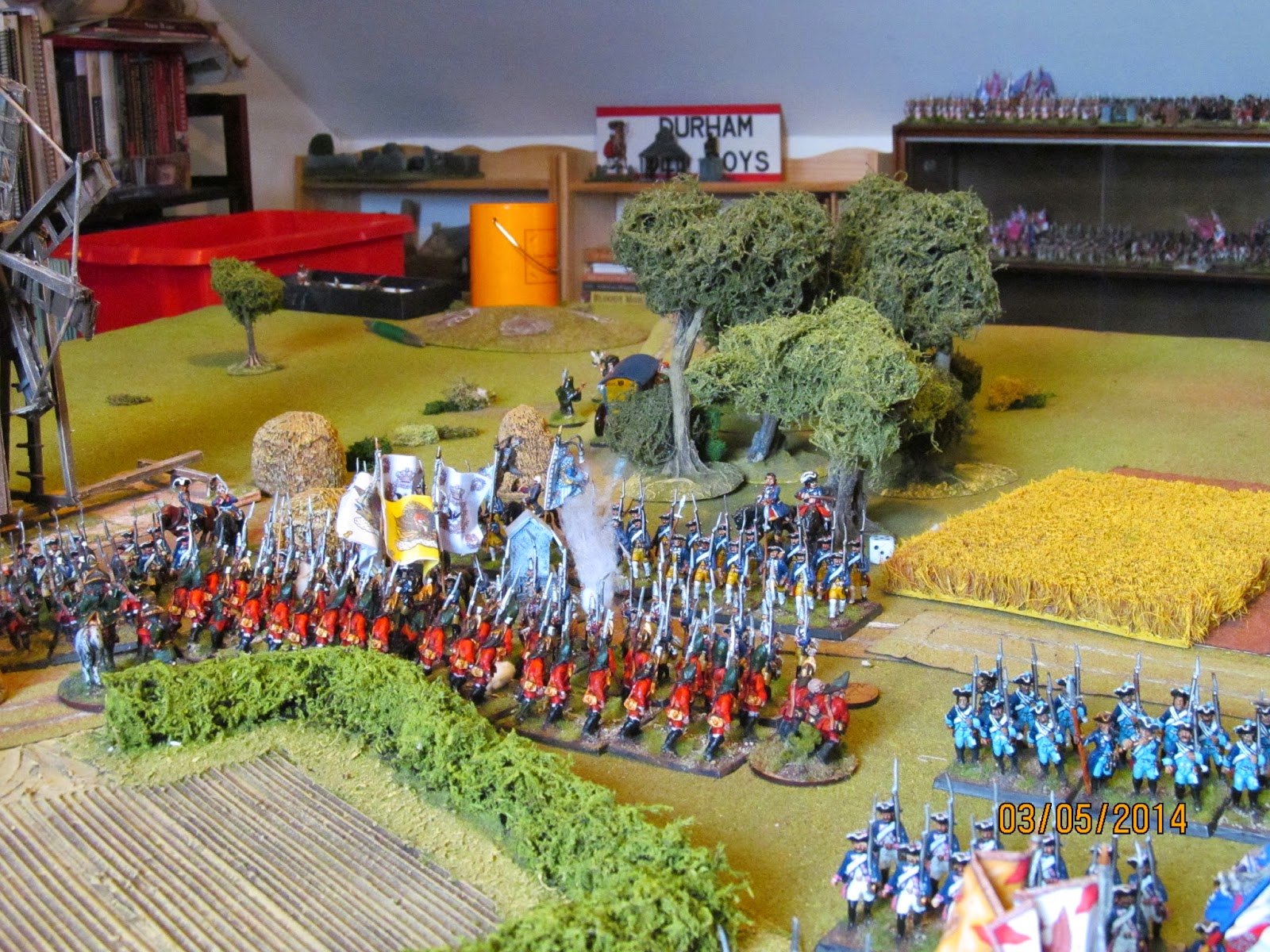 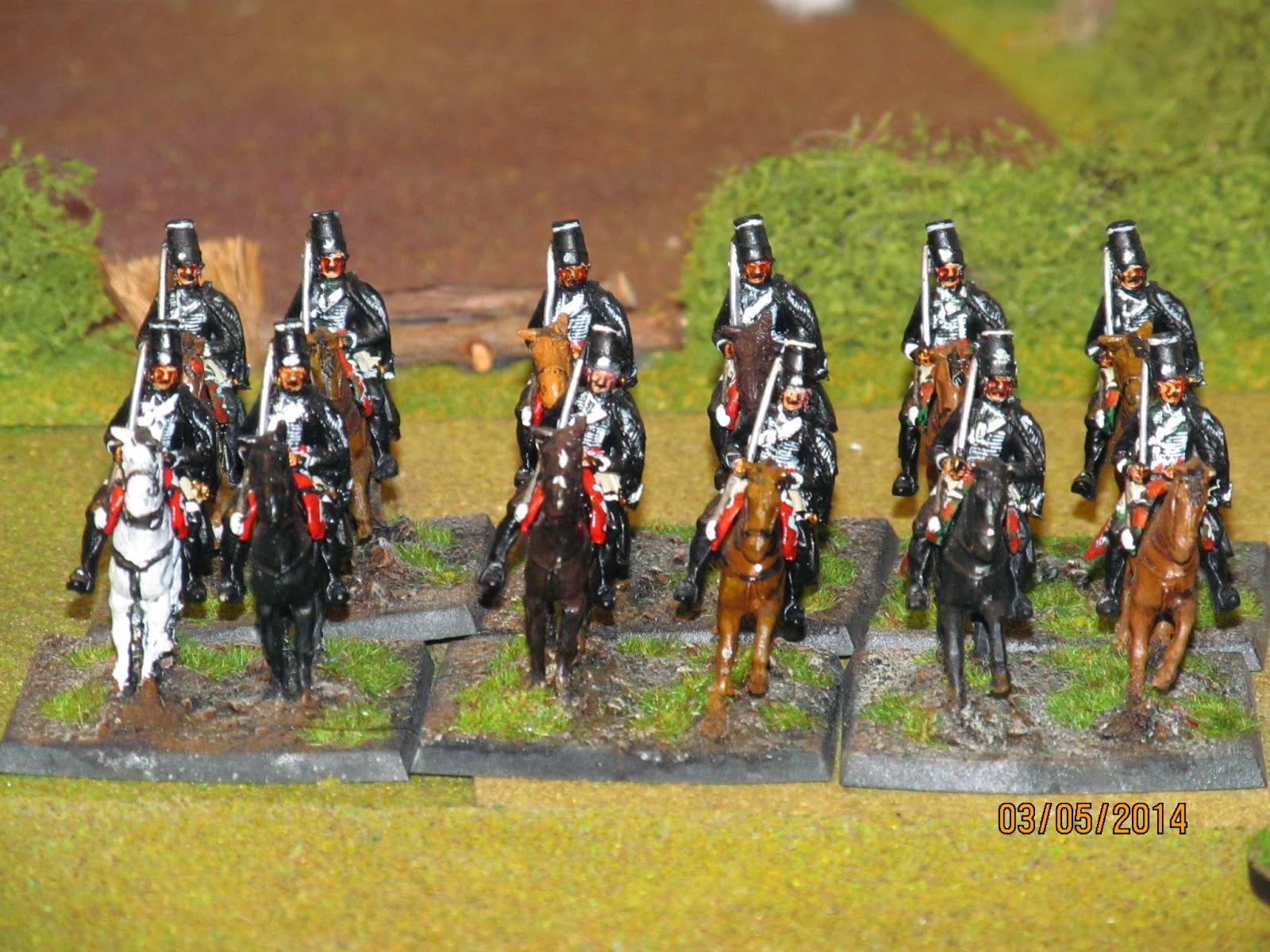 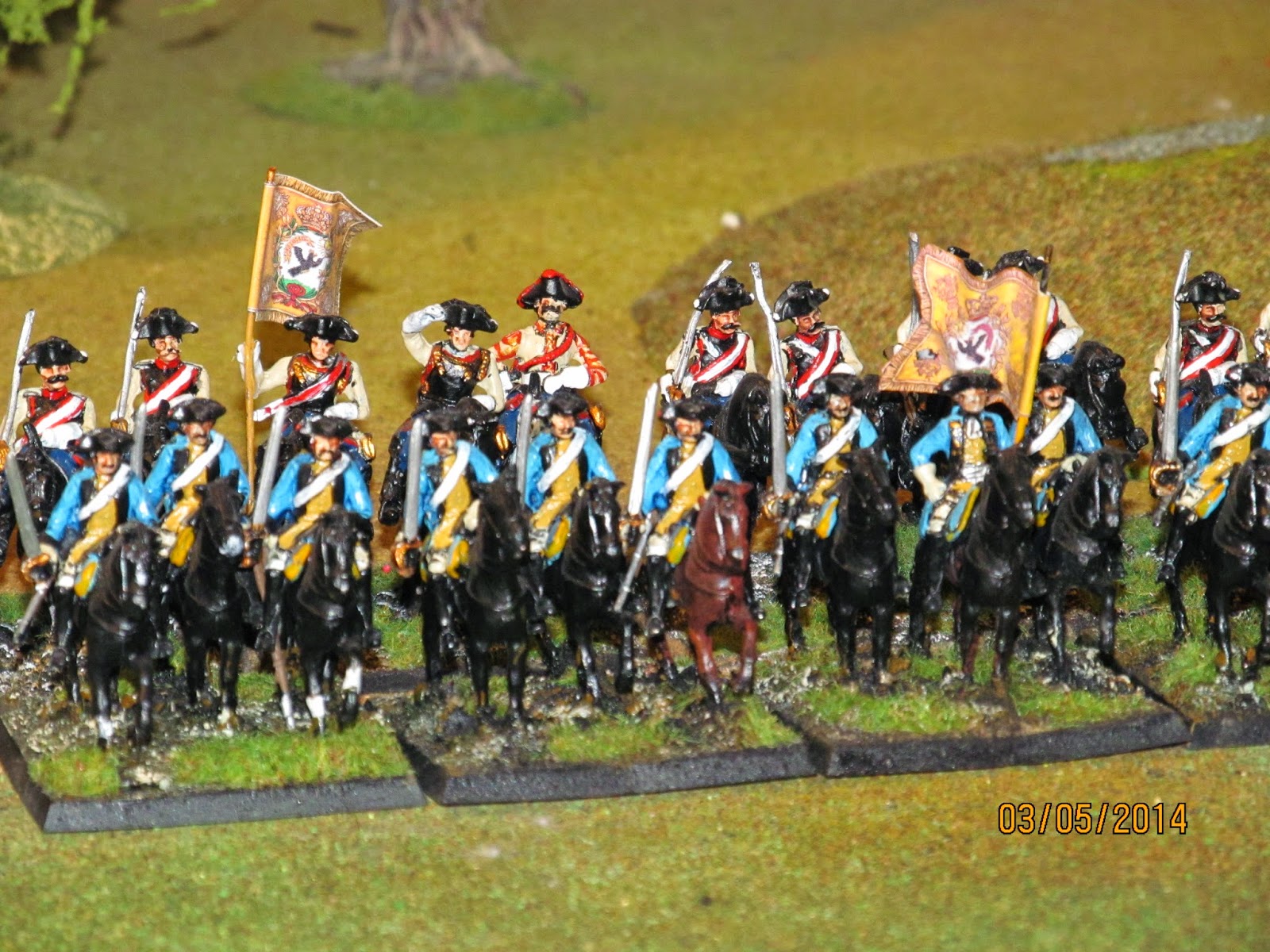 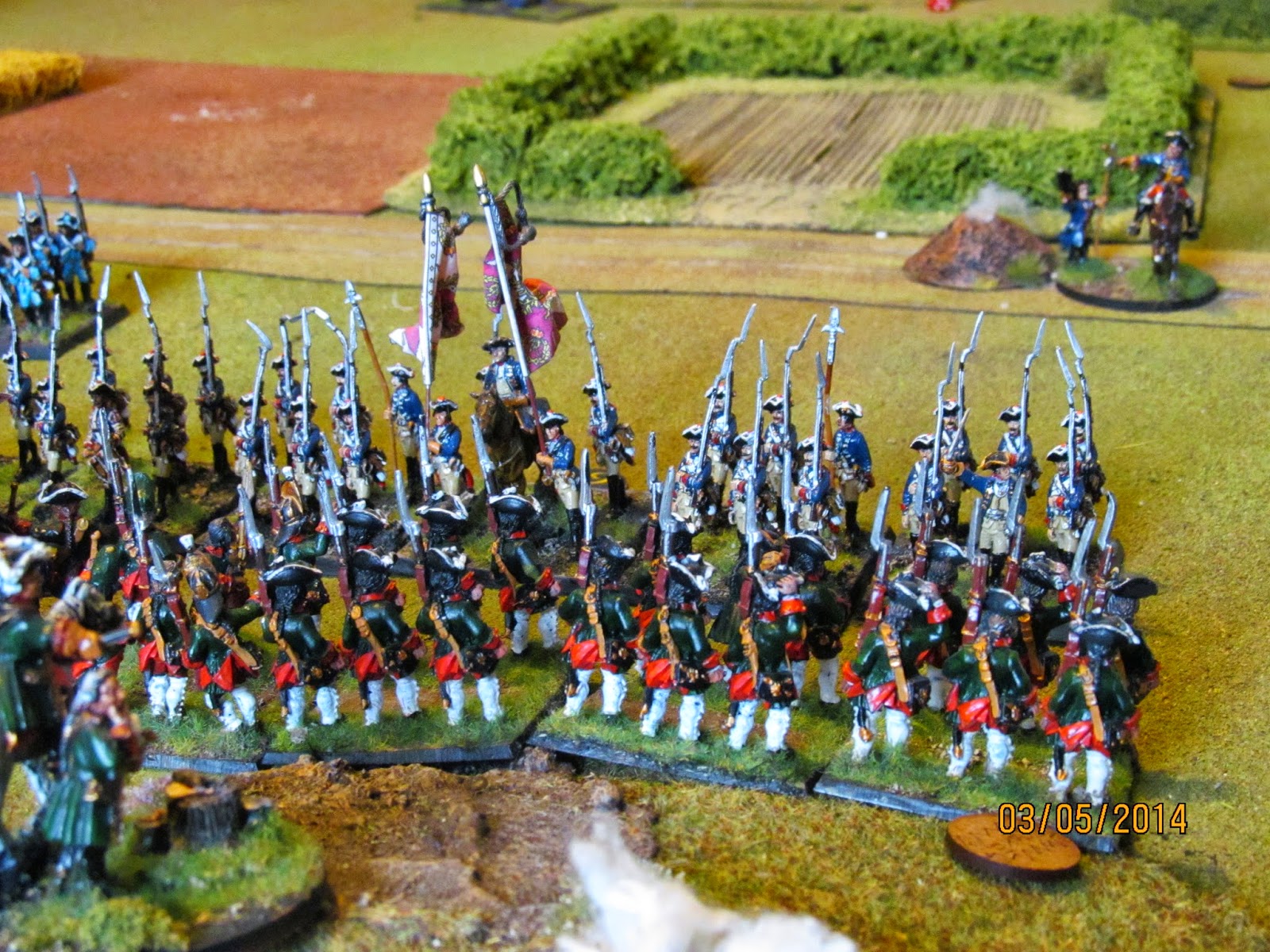 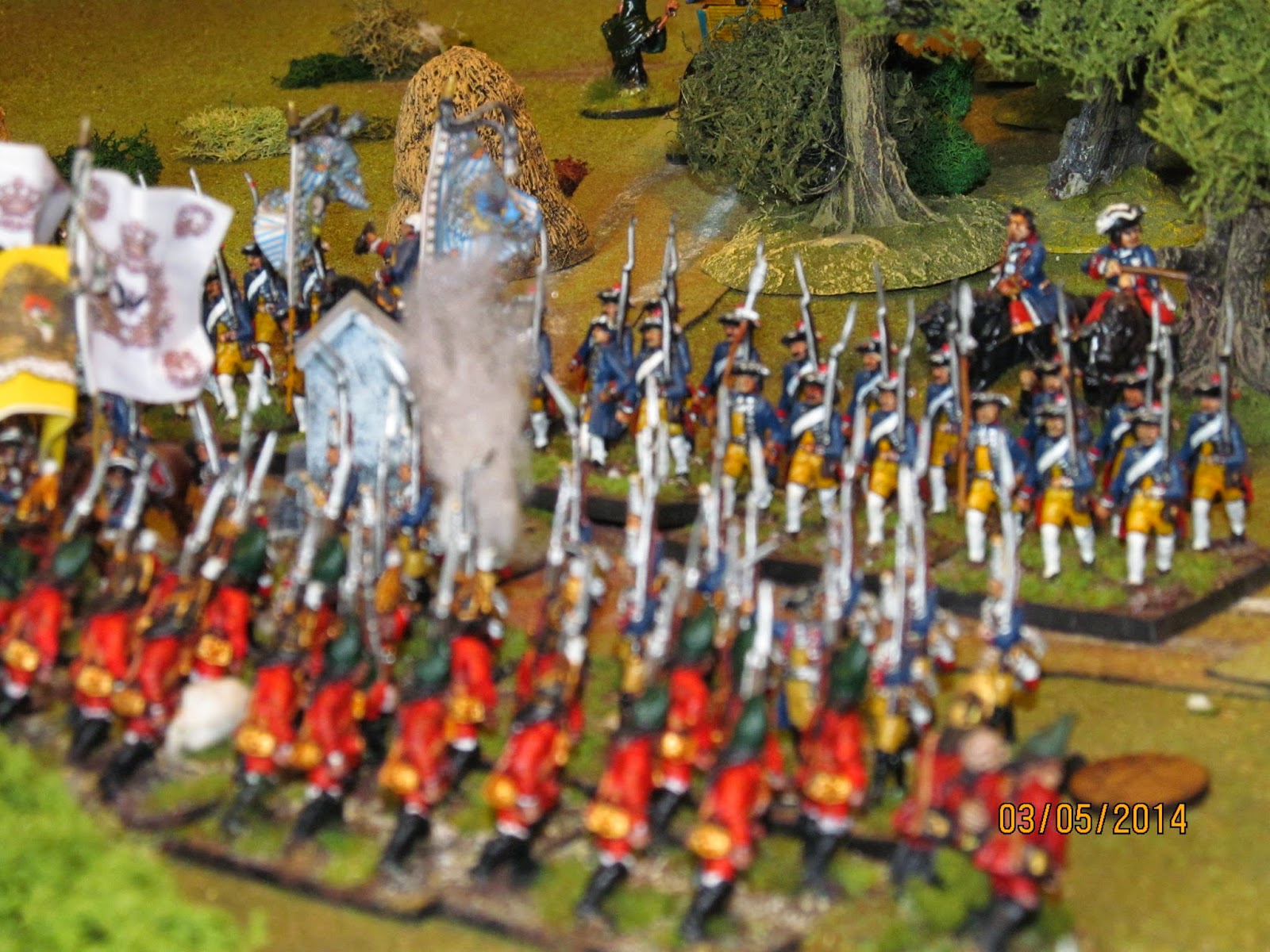 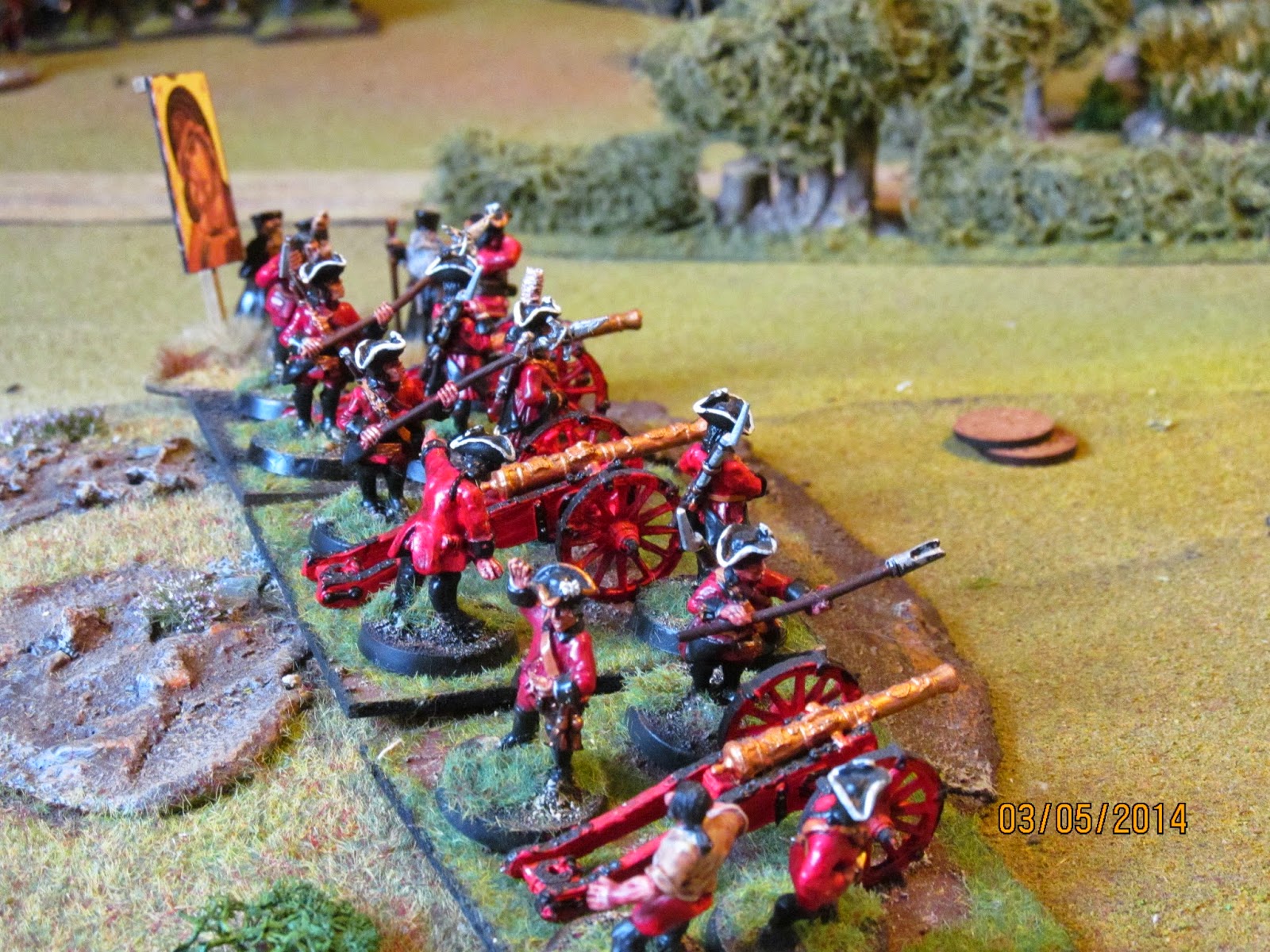 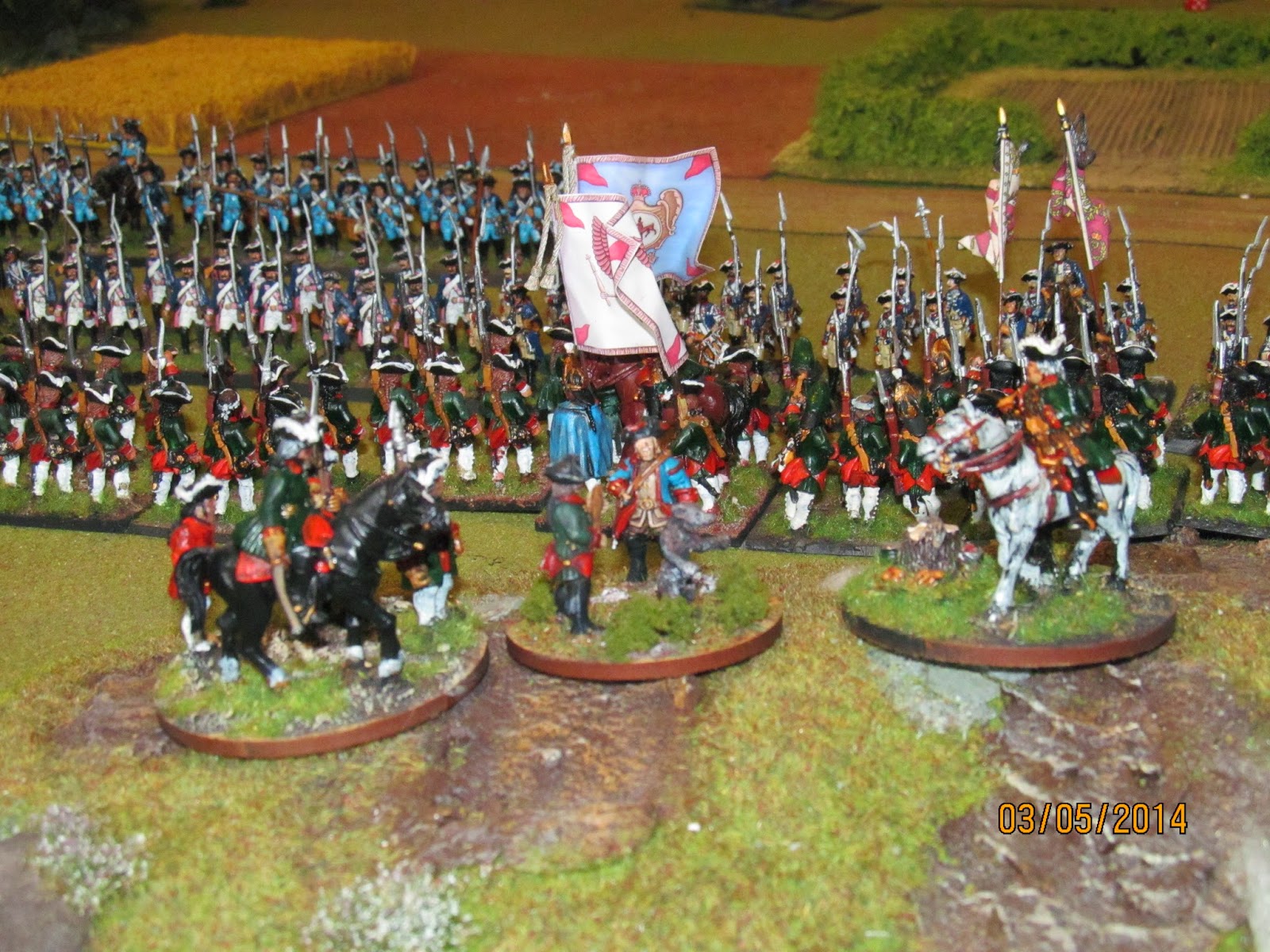 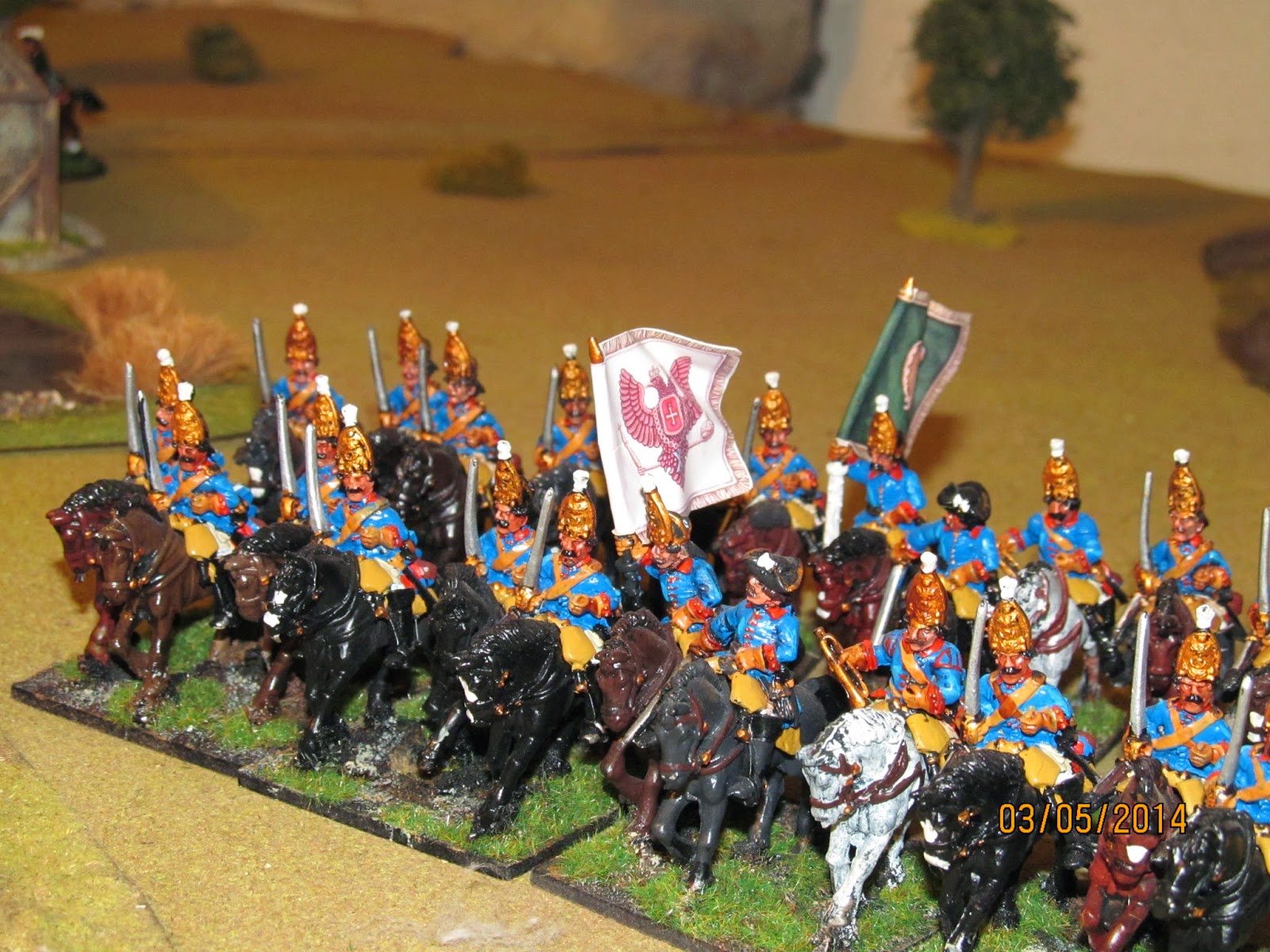 By the end of the game the two Russian cavalry brigades were spent (broken), as were one of mine plus an infantry brigade, so although a couple of other brigades on each side were close to being broken we declared it a bloody draw, which is a fairly historical outcome for Prussian v Russians in the SYW. Paul had never played BP before so i hope he liked the rules, and I as usual forgot a few important bits and pieces, but without any detrimental effect on the game.
By Colin Ashton - April 03, 2014