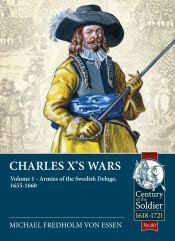 This volume has to be yet another feather in the cap for Helion, providing us with the first comprehensive English language account of the army and wars of Charles XI of Sweden, in particular that event better known in Poland as ‘The Deluge’. Now, this is a quite complicated yet fascinating period of history, and one that needs unraveling to help us understand the events leading up to the war and the war itself. This is the first of three planned volumes on the war, and this one, Charles X’s Wars. Volume 1 - Armies of the Swedish Deluge 1655-1660 by Michael Fredholm von Essen certainly sets the bar high for the volumes to follow.
The author focuses on the armies that were involved in the ‘Swedish Deluge’, fought between Sweden, the Polish-Lithuanian Commonwealth, Brandenburg-Prussia, Muscovy, Transylvania, the Cossacks of the Ukraine, the Tatars of the Crimea and the Holy Roman Empire. A glance at a period map will show that just about every nation in Eastern Europe was drawn into the war, so researching and writing a book on such a broad subject is to be commended.

After a brief introduction, a very detailed and informative chronology (really handy for those like me who need a few dates to help register what’s being described), together with a very comprehensive gazetteer of the great and the good, by nation. There are also some far more detailed and fascinating biographies of eight of the main contenders, including Charles X of Sweden, John Casimir King of Poland, Frederick William, Elector of Brandenburg, Tsar Alexis I of Muscovy, the Cossack Hetman, the Prince of Transylvania, the Holy Roman Emperor and the Khan of the Crimean Tartars.

The complex and sometimes misunderstood origins of the conflict are explored and explained before generous chapters are given over to the armies of each of the combatant states. All of these provide a good level of information, including their organisation, troop types, dress, arms and tactics, and where possible, details of the regiments that made up the various armies. Personally I found the chapters on Brandenburg and Tartars, and to some extent the Empire, particularly interesting as they offered a lot of new (to me) material.

The book as a whole benefits from an excellent and prolific range of contemporary black and white illustrations, photographs of arms and armour and a few nice black and white sketches. The star of the book for me are the eight pages of original colour artwork by Ukrainian artist Sergei Shamenkov, depicting a beautifully drawn selection of different troops from the various combatants’ armies.

So, an excellent book, and a tantalising first volume of what will no doubt be a fascinating and information-packed series.
By Colin Ashton - March 12, 2022