"Fritz, for you zee var is over"

News just in confirms that Frederick is alive and a captive of the Austrians following the Battle of Hochkirch. He was found under a cannon after his horse was killed, and suffered a bloody head wound, a broken arm, a broken nose and a black eye. He also lost his wig! 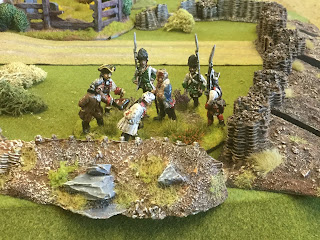 Presumably Frederick will soon be sent to Vienna. This opens the way for a nice small action where the Prussians will try and 'spring' him.
Posted by Colin Ashton at 9:42 am