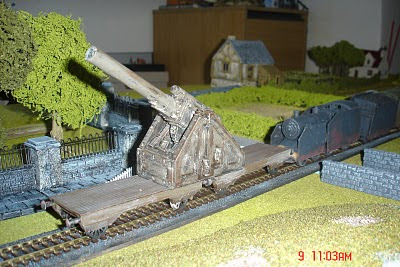 Well I thought the guns on both of my armoured trains were a bit on the small side so I cobbled this together from a kit I bought on ebay a few months ago. I need to do some work on a customised flatcar to carry this beast along with its ammunition and other stores but wanted to see what it looked like. I think that if it were to fire the entire train would end up being propelled at a zillion miles per hour back up the railway line, but this is not real life so what the hell!!!!
I seem to have acquired rather a large number of figures for this project and just hope I can get them all finished and on the table soon. I still have my BUF cavalry to finish, along with their dismounts, as well as about 60-odd militia (including cavalry) as yet unassigned to any particular faction, a squadron of Yeomanry and a platoon of regulars or TA. Well at least they are easy enough to paint! Not today though as the sun is shining and the garden needs sitting in!!!!!
By Colin Ashton - June 20, 2010