VBCW The assault on Wolsingham 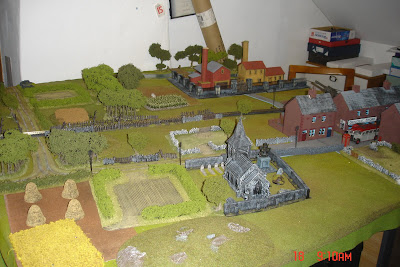 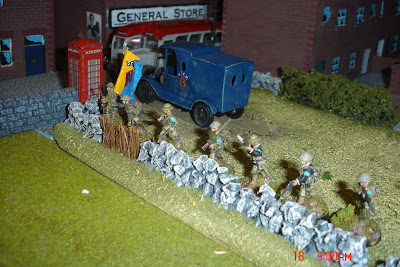 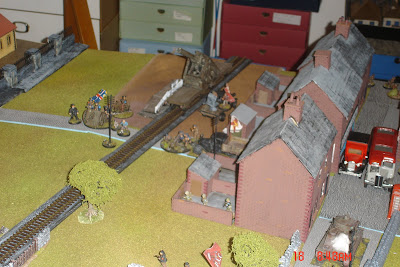 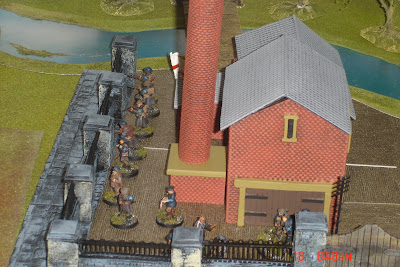 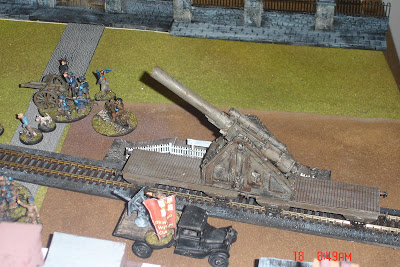 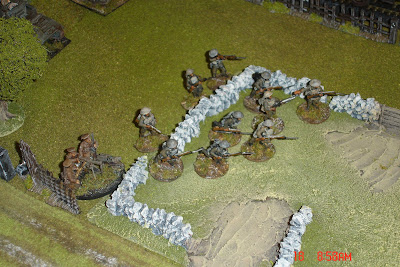 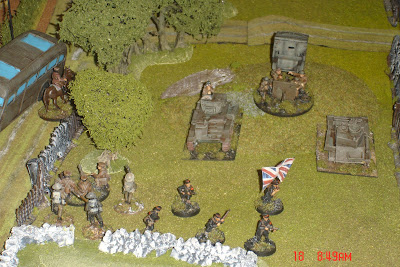 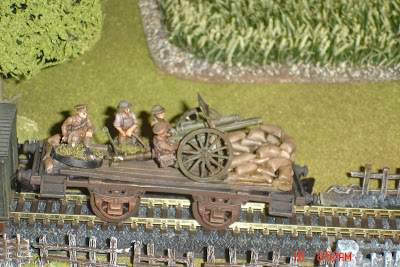 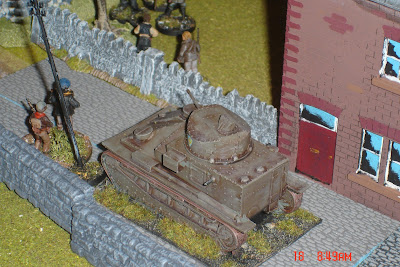 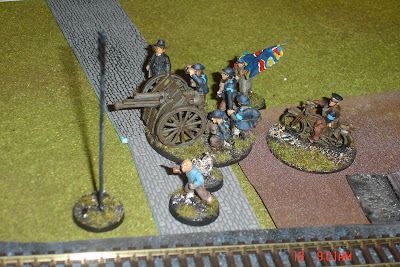 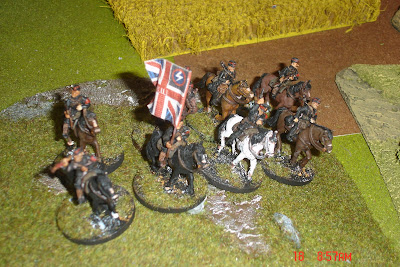 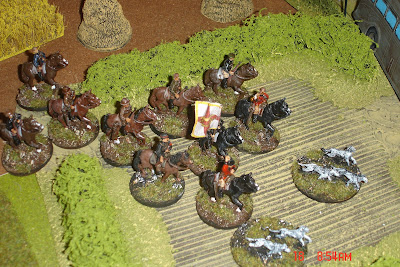 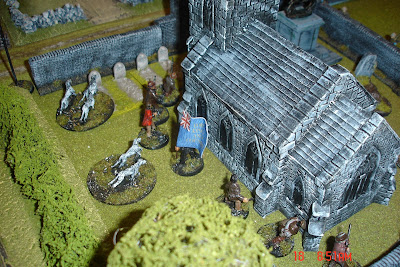 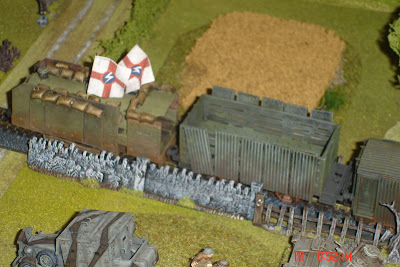 We fought the long-awaited Government assault on Wolsingham last night. John played the Government forces from Stanhope and commanded two platoons of the DLI (regulars) with a supporting 18pdr field gun, mortar, HMG and 2pdr anti tank gun. He also had 2 Vickers MkVI light tanks and two troops of cavalry; a troop of BUF and an LDV troop - the Weardale Hunt, complete with foxhounds! Topping this off was a BUF armoured train (which John chose to use to mount the 18pdr on). There was also supposed to be some air support but in the heat of battle we forgot to dice to bring it on. Quite a tooled up force for a hard mission. John's task was to capture or destroy a socialist super heavy railway gun that had been reportedly refurbished and recently rolled out from the steelworks. Not something that could be ignored!!!
Rob and I commanded the defenders. On table were the local Anglican League; a platoon of the Bishop of Durham's guard and the Wolsingham School cadet force. They were supported by an 18pdr, a mortar and an HMG, together with a vintage Vickers MkII tank and an old Rolls Royce armoured car. My combined Shildon Railwayman's and Wolsingham Steelworkers were off table as they were stationed to the east of the town. I had potentially six platoons, a tank and a truck-mounted gun available but only two platoons and the portee were activated - the rest were occupied with a government diversionary attack.
I had envisaged a rapid government thrust to capture the gun using the speed of their train, tanks and cavalry to get them into the fight asap. We used much-simplified Triumph and Tragedy rules with a card-driven movement system, i.e. a black card allowed any government unit to move and if they wished to fire, and the red for the opposition (I was diamonds and Rob was hearts).
We drew a black card first so John's forces began to arrive on table, then we drew another, and another, and another!!!!! In all we must have drawn 18 spades or clubs in the first 20 or so cards! This meant was that John's forces did establish themselves on table and caused some serious damage to Rob's men who were unable to respond. Ah yes, I hear you say! Well the odds are that very soon there will be fewer black cards and the reds will start being churned out. Correct except for one twist. I left the jokers in the deck so when they were drawn we re-shuffled the pack! Went down well......not!
Anyway, it was a hard fought battle. Highlights have to be the demonstration of poor driving skills by one of my militia platoons in a truck that in an effort to avoid ramming the rear of the League's disabled tank blocking Front Street, swerved down a side street and collided with Rob's HMG lurking behind someone's back yard wall, and the valour of the crew serving Rob's 18pdr. Pounded by artillery fire and riddled with machine guns from the enemy tanks the gun crew was so reduced and supressed that the vicar, a passing motorcyclist and my famous Belgian reporter (avec chien) had to help serve the gun. They hung on though and did stirling work holding back the enemy and damaging the train. Less 'stirling' were the afore-mentioned militia platoon who scrambled out of their truck into someone's back yard only to be shelled and machine gunned so heavily that they immediately ran off! (Strangely no pictures of their flight have survived).
John's cavalry and infantry pushed up the road towards the town and the glorious cavalry charge I had hoped for didn't happen (boooo!) as the advance ground to a halt, held up by the tank, the cadets and the timely arrival of my other militia platoon. I think a cavalry charge might have worked and would have been a good spectacle even if it hadn't! The Weardale Hunt galloped over the fields and then dismounted, taking refuge in the church while the DLI platoon retreated under heavy fire. As usual the BUF did little and ended up running away again. Meanwhile John had started the train up in an attempt to ram the railway gun. Good idea but it was foiled by my militia portee that wrecked the gun carriage, bringing the train to a halt. Over on the far flank the other DLI platoon and mortar had been in a firefight with Rob's troops in the steelworks but had made little headway. They were eventually driven off by the Rolls Royce a/c but not without inflicting heavy casualties on the enemy.
With most of John's forces in retreat or pinned down we called it a day. Another Anglican League/Socialist victory but one won at some cost, and you can be assured the Government forces will try to take out the railway gun again, but maybe by more subtle means next time? I already have a cunning plan.........
By Colin Ashton - September 29, 2010