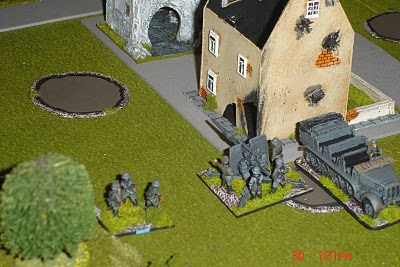 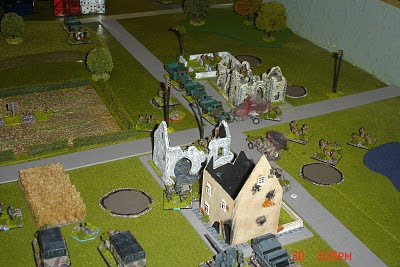 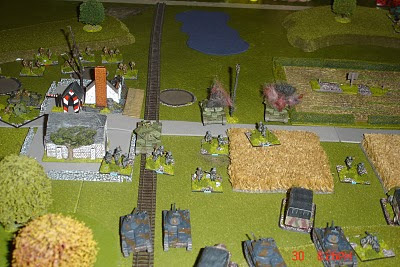 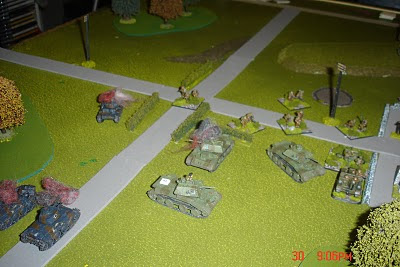 I went down to John's last night to play another 15mm WW2 game with Rob. A couple of weeks ago we had tried out Peter Pig's 'Abtaillung' rules in an early war scenario and had a cracking game. I had been the British attacking force and Rob the defending Germans. In the rules you have to throw to see if your reinforcements arrive, and I got all mine on well before the Germans were all on table. My tanks and armoured cars rushed ahead and Rob had me backed into 75% of the table, hanging grimly on. In the end the victory conditions system used by the rules dictated that it was a minor German victory as they had held on to their main objective, so it felt about right.
Last night we changed sides and John had set up an encounter battle. Rob's Anglo-French force was on table long before mine arrived, and coupled with some crap dice rolls, were making a mess of my Germans! My 88mm gun only hit once in the whole game and most of my other rolls were so low I doubt the enemy even knew we were firing at them. Highlight of the game was Rob's cruiser tank squadron commander who spent ages trying to get out of a minefield, only to be brewed up the moment he left by one of my Pz2's, and the French hunting party trying to pick off my remaining armoured car from the recce squadron. They failed and I was saved by the arrival of my last infantry platoon. At the end my forces had been pretty much carved up. Out of 10 armoured vehicles I had only two left, although the Brits and French were almost as bad. When we calculated the victory conditions there was only one point in it, in the Brit's favour, so another win to Rob. Excellent game but as John, Rob and Neil have masses of 15mm WW2 stuff I have no need to invest in any......not until my AWI project is well and truly complete!
By Colin Ashton - February 11, 2011