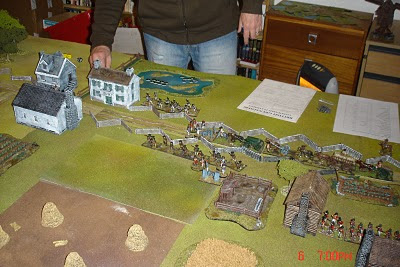 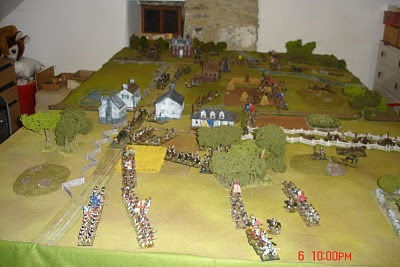 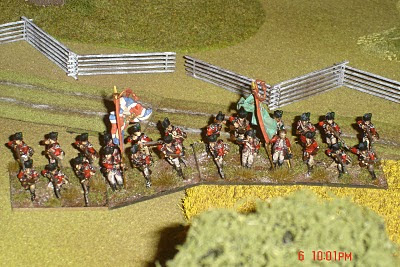 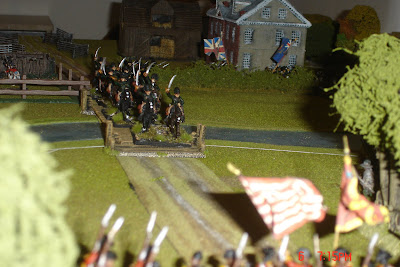 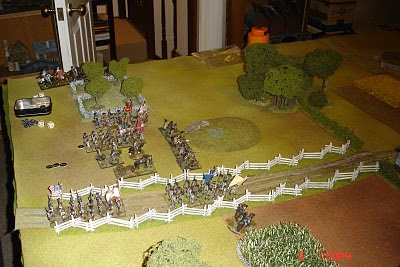 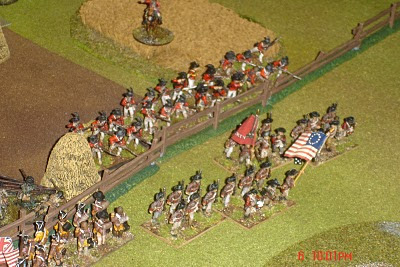 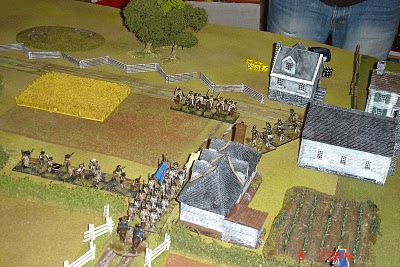 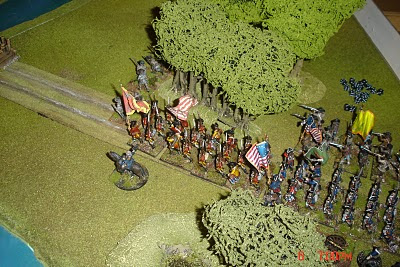 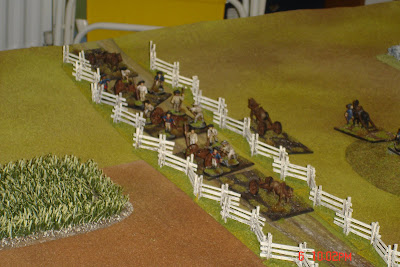 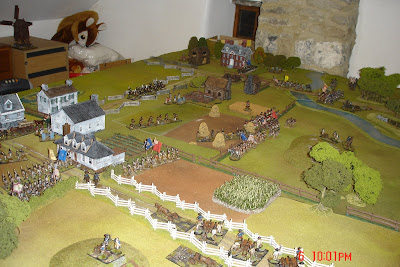 I set up our second AWI game using British Grenadier hoping that the scenario would ensure a tight, fast and enjoyable game. The premis was that a British supply column had to be brought in safely (to where was never specified but could have been Philadelphia, New York or even somewhere down south as much as anywhere else), escorted by a small mixed force of Light Infantry, loyalists, light guns and cavalry. As the game progressed reinforcements might appear at the exit end of the table. Opposing this force were three brigades of Parriots/Rebels (delete as applicable) , one each of line, 2nd line and militia. There was also some artillery and a very small force of cavalry. This force was tasked with pinning and intercepting the British as they traversed the length of the table and to stop the supplies escaping. Simples!
As far as the game went, all three Rebel brigades entered the table, with the better Continental brigade on the right (me), the militia in the centre and the 2nd line brigade on the left (both John). Rob had the British and at once sent a delaying force of Queens Rangers and British Legion cavalry to hold my brigade at bay whilst the rest of his force and the supply column raced (?) down the road. Despite winning a local victory by chasing the cavalry off, followed up by a heroic charge across the bridge by one of my Continental battalions, which resulted in the Queen's Rangers running away, my brigade had lost too much time and had no chance of intervening in the battle that was developing at the other end of the table.
The British Light battalion and Hessian Jager were sent out as a flank guard to delay the centre Rebel brigade, which they did very well as the militia were held up at a fenceline with a large collection of DPs that they could not get rid of fast enough. The fighting in the centre finished with a bayonet charge by the light battalion that saw off one batallion of militia.
Meanwhile John's leftmost brigade, supported by cavalry, was trying to get into contact with the British, but were picking up lots of DPs on the way. British reinforcements also started appearing (17th Foot followed by the Volunteers of Ireland, 3rd picture from the top, the next move) thanks to some good dice rolling by Rob. John was almost caught in column by the 17th Light Dragoons but survived. Unable to make headway against the British reinforcements, John's brigade was forced into a firefight with the British which he would be unlikely to win in the long term, especially when the 23rd Foot arrived as reinforcements in the final move. The supply column was not going to be stopped from leaving the table edge. A British victory was declared.
Much debate was had about the rules. On the plus side we had played for about two hours and got through around 10 moves using quite large numbers of troops. It looked very pretty as a game and the scenario was a hard one, whether it was for for the British to achieve their goal or the Rebels to achieve theirs. However, whilst the game was ok, none of us were totally happy with the rules, and I think that despite being the 'rules of choice' for the period, they are too complicated for our liking, don't give a particularly AWI feel to the game, and we just can't 'get' DPs as there must be another way to reflect what they are intended to do. I understand what they are there for but there must be a more satisfying way of depicting the need to redress lines etc. It may just be that we're still not fully up to speed with the rules. Rob suggested that we try the same scenario using Black Powder, which we shall do next time. We are all great fans of the period so I hope we can either get used to BG or find another set. I might try and adapt our own 'Old School' set we use for Seven Years War that we all like.
By Colin Ashton - February 17, 2011