There seems to be a fair bit of interest in the campaigns in Burma waged by the Chindits; certainly there are a few figure ranges being pushed at present. My late uncle was in the Royal Signals firstly in N Africa and then in Burma where he was attached to the Chindits, specifically the Royal West African Field Force, a Nigerian Brigade which formed a substantial proportion of the entire Chindit force. My uncle was captured by the Japanese but made it through the war and when I was going through his effects recently I found some of his insignia, including his Chindit shoulder badge and RS/RWAFF shoulder tapes. He never spoke about his experiences in Burma ( he did, a bit, about N. Africa and Tobruk) but did have good words to say for the Nigerians of the RWAFF. Perhaps one of the manufacturers of figures for this campaign might like to add some to their range of figures, or at least suitable separate heads? 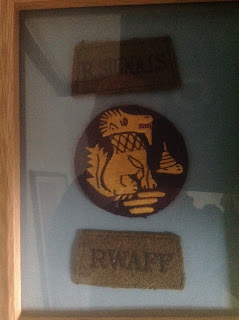