Battle for the Frontier part IV

John and Rob came up last week for yet another 1866 game, part of my mini campaign. Again, the Prussians were in Corps strength and were faced with trying to emerge from the mountain passes on the frontier and drive off Austrian covering forces. Forces available were as follows:

Half of the Prussian guns were smoothbores. The rest were modern BLRs.

Rob wanted to be the Austrians and John took the Prussians. I was struggling as my back was really painful but I helped out with the Prussians. 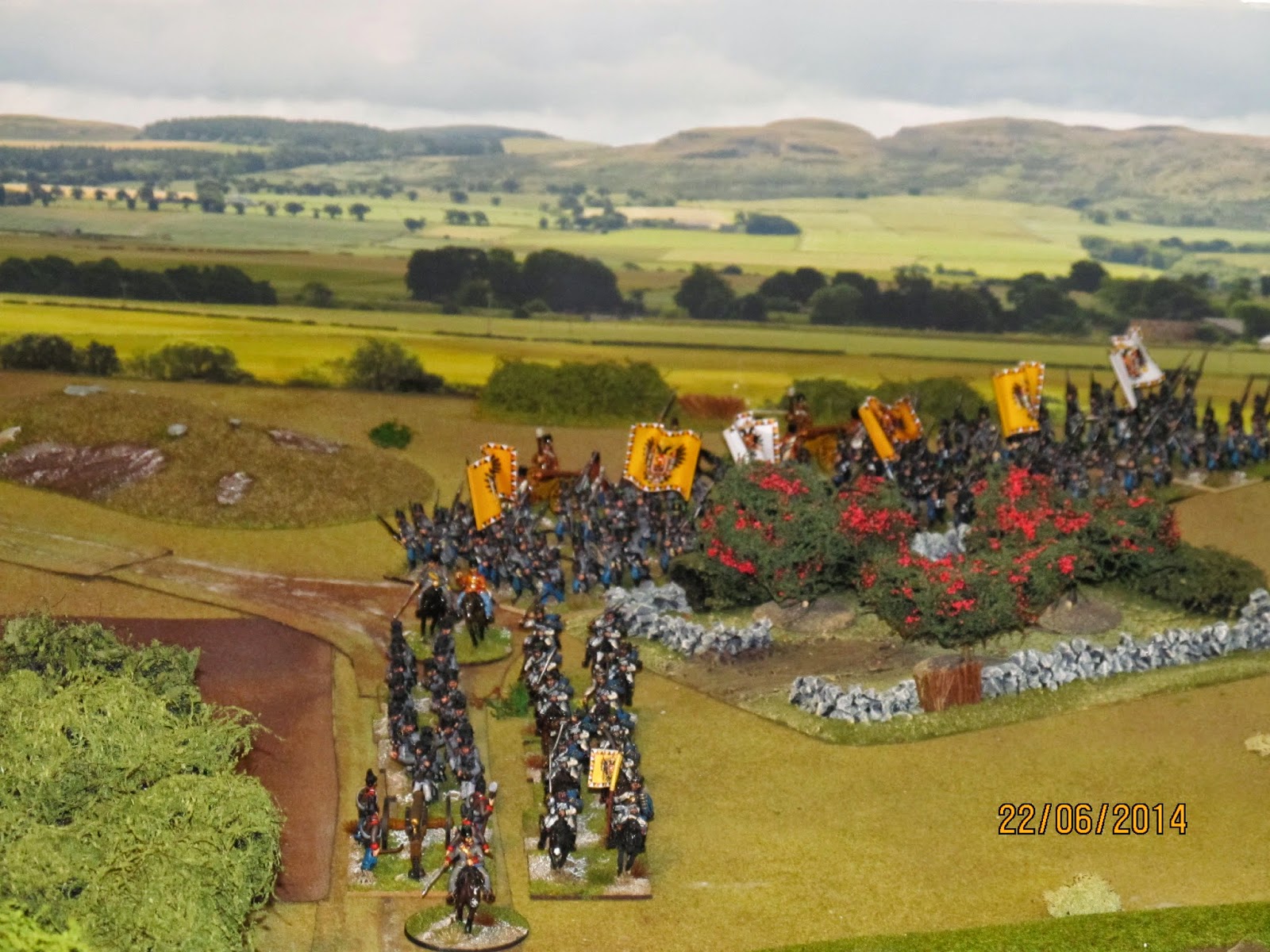 The Austrians and Saxons were spread out all over the table while the Prussians had to enter from between the high hills in the bottom left hand corner. The cavalry and advance guard were on the table but the rest would enter on successive moves. Above, the Austrian reinforcements on the move. Unfortunately for the Prussians they moved quite fast and were in position before the Prussians were  able to intervene. The infantry split either side of the wood while the jager and hussars sped off to join the left flank of the Saxon brigade facing the Prussian advance. 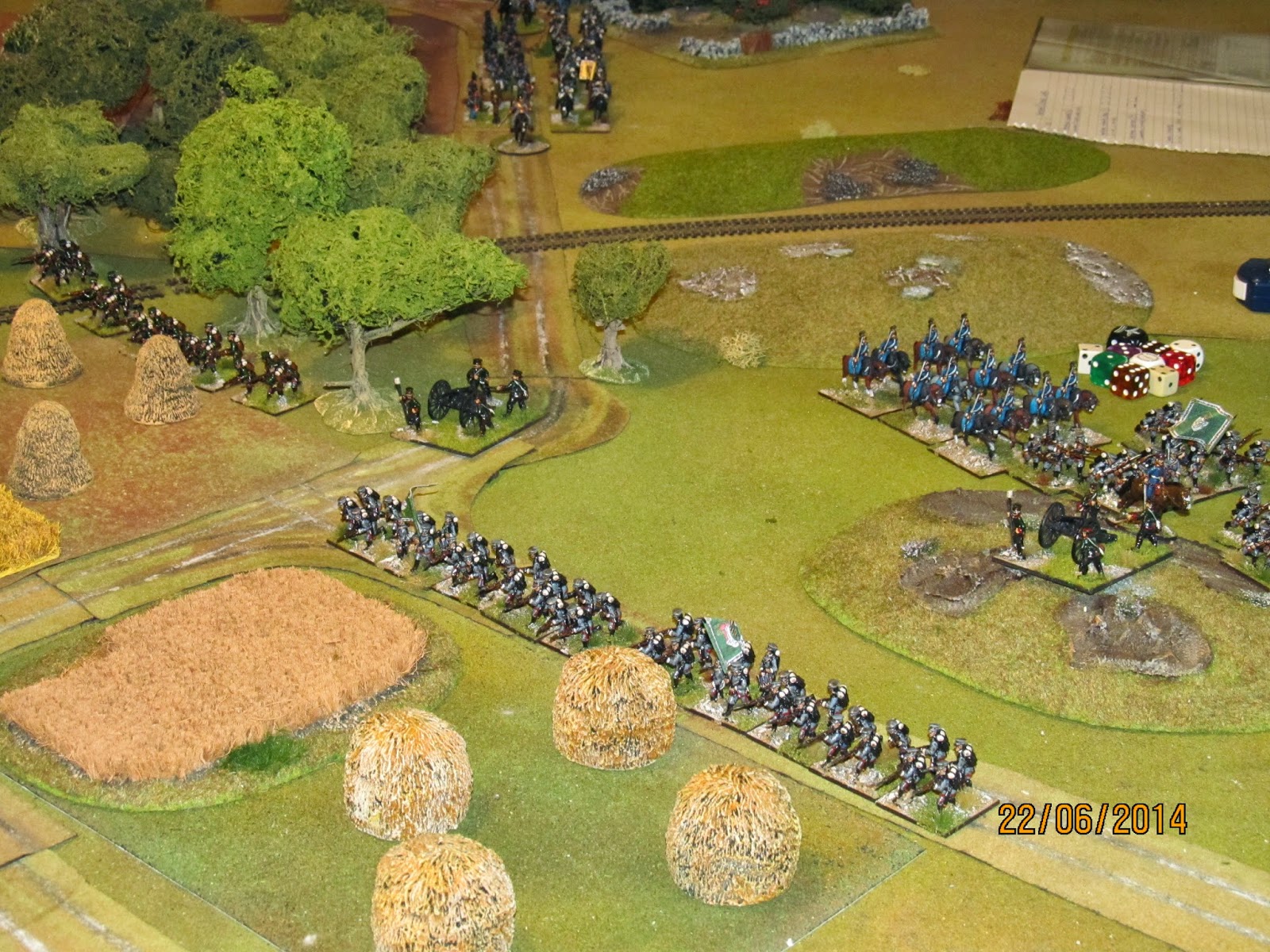 The Saxons deployed behind the area of cultivated land and on the edge of the wood and the low hills on their left. John split the advance guard and sent them straight ahead against the Saxons. The Prussians probably shouldn't have spread their advance guard so thinly as they were heavily shot up and unable to make much headway against the Saxons who were able to bring superior numbers to
bear. 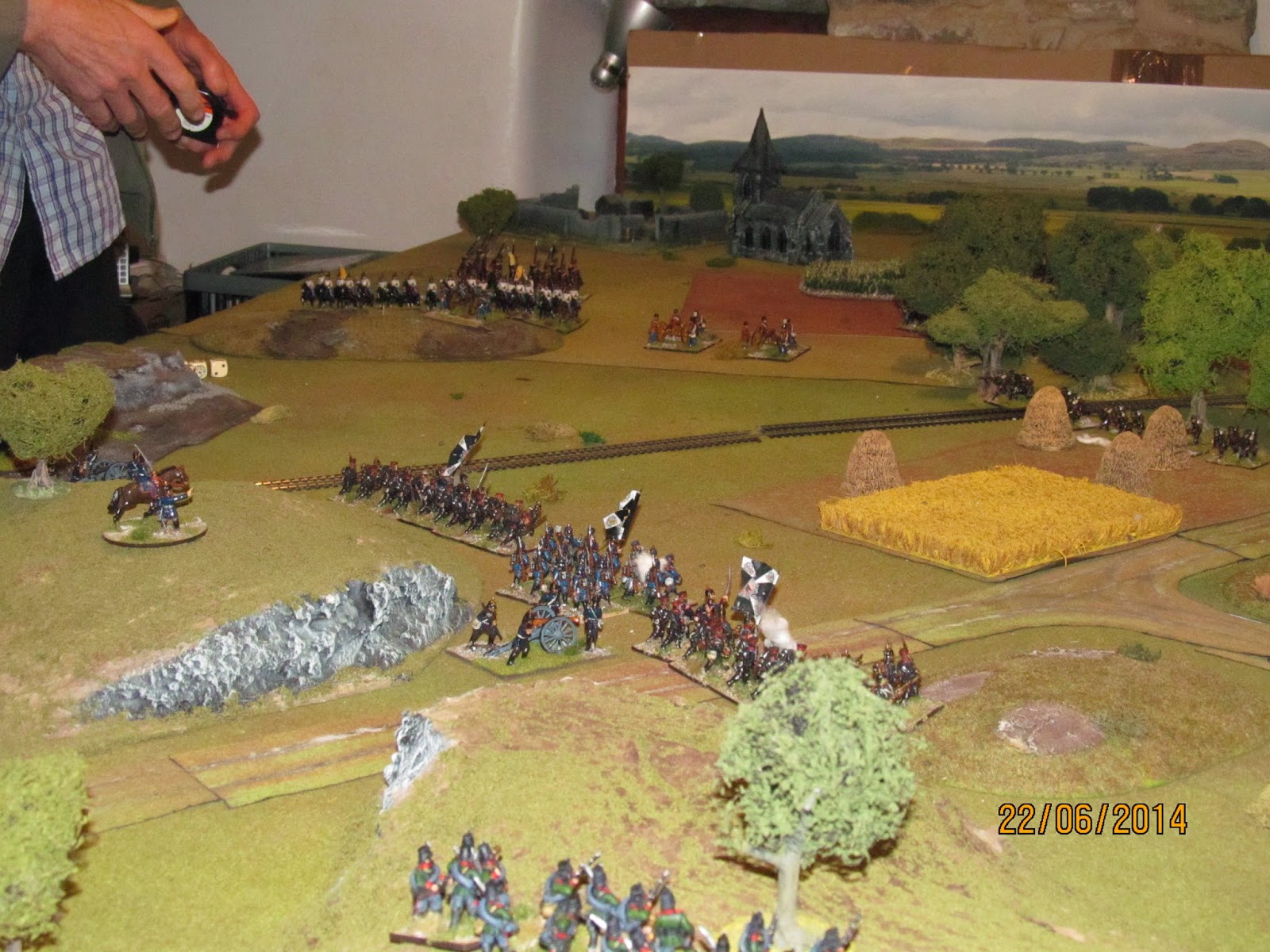 Three battalions of Prussians were facing five of Saxons plus one of Austrian jager and three batteries of guns. There was also a heavy cavalry brigade of Austrian cuirassiers and uhlans moving towards their left and Austrian and Saxon cavalry threatening their right. Their only support was a battalions of jager who moved onto the hill to their right, two batteries of horse artillery and in their rear, two brigades of cavalry. The infantry rapidly became disordered and unable to move but one lone unit did charge the Saxon jager holding the wood and drove them off, despite being enfiladed by the Austrian reserve artillery which had just formed up on the flank of the Saxons. The Prussian dragoons then charged the artillery in the flank and destroyed both batteries before forcing one unit of Austrians into square. They were then engaged by the Austrian reserve cavalry and in a see-saw battle were forced to retire shaken, but not without seeing off one regiment of cuirassiers in the process. 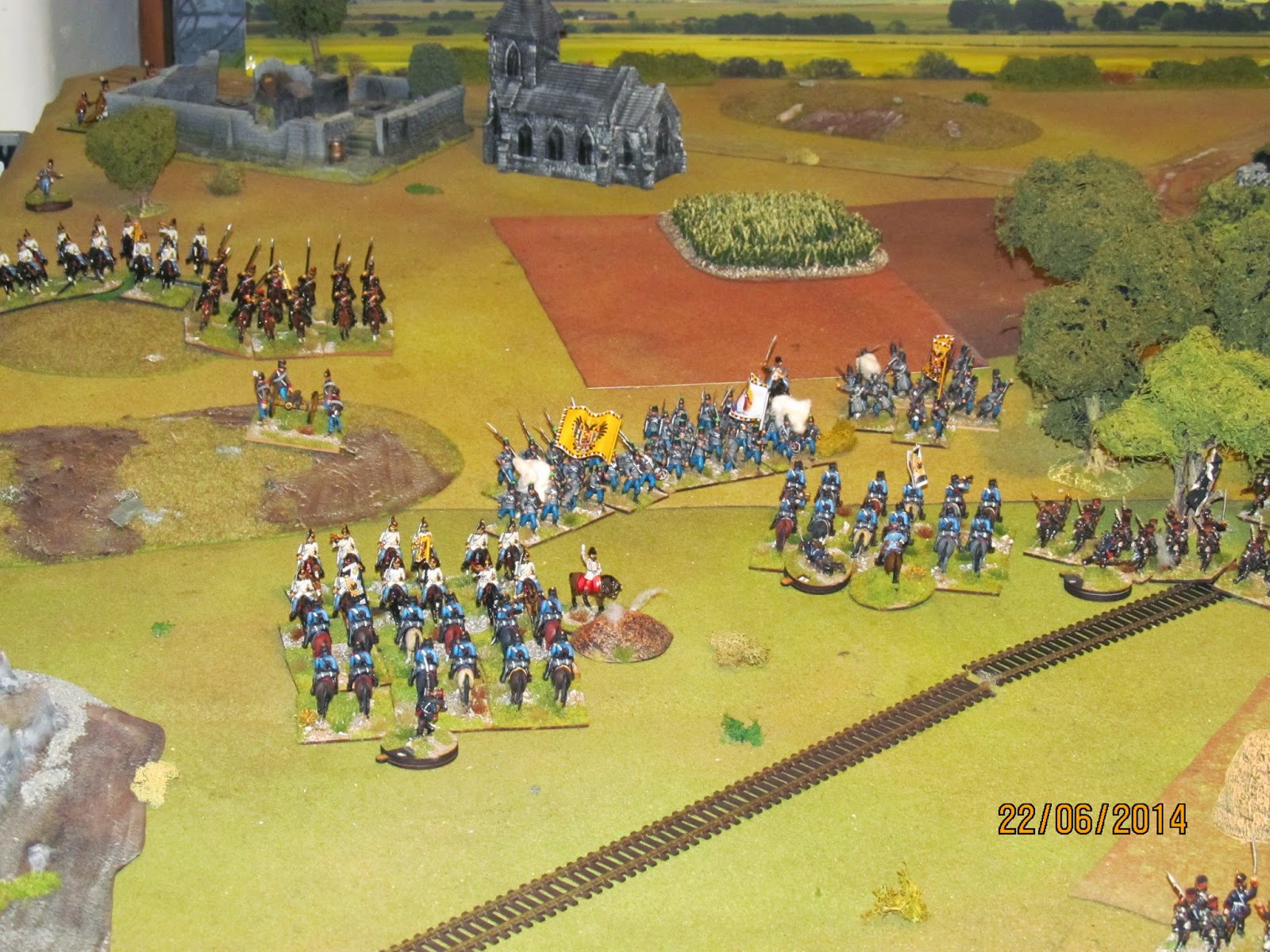 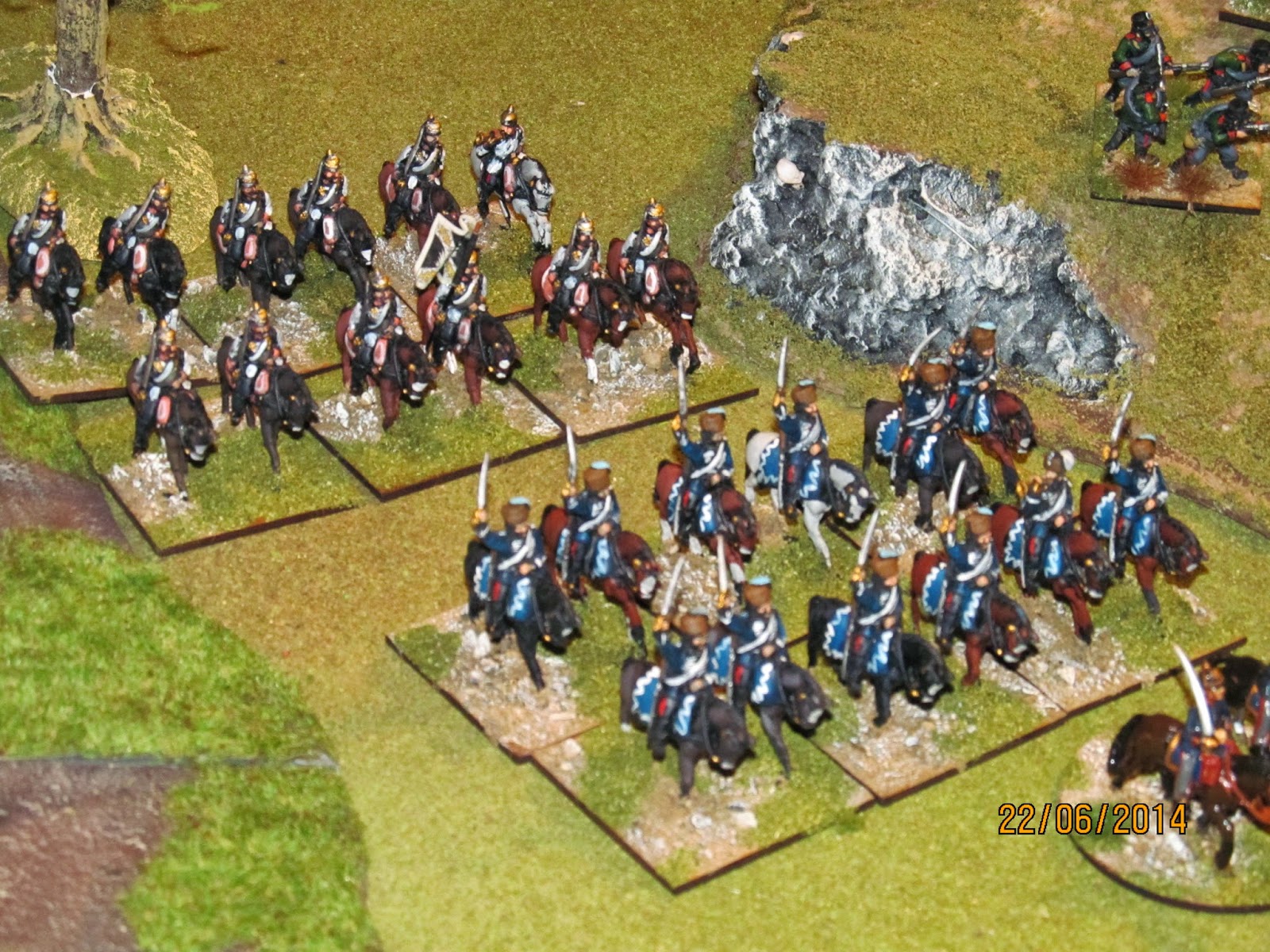 Above, Prussian cavalry on the right about to engage the enemy. After a very fierce series of melees they destroyed the Saxon Reiter and drove the Austrian hussars from the table for the loss of one unit becoming shaken. Meanwhile, below are the first of the Prussian reinforcements, all six battalions of them! 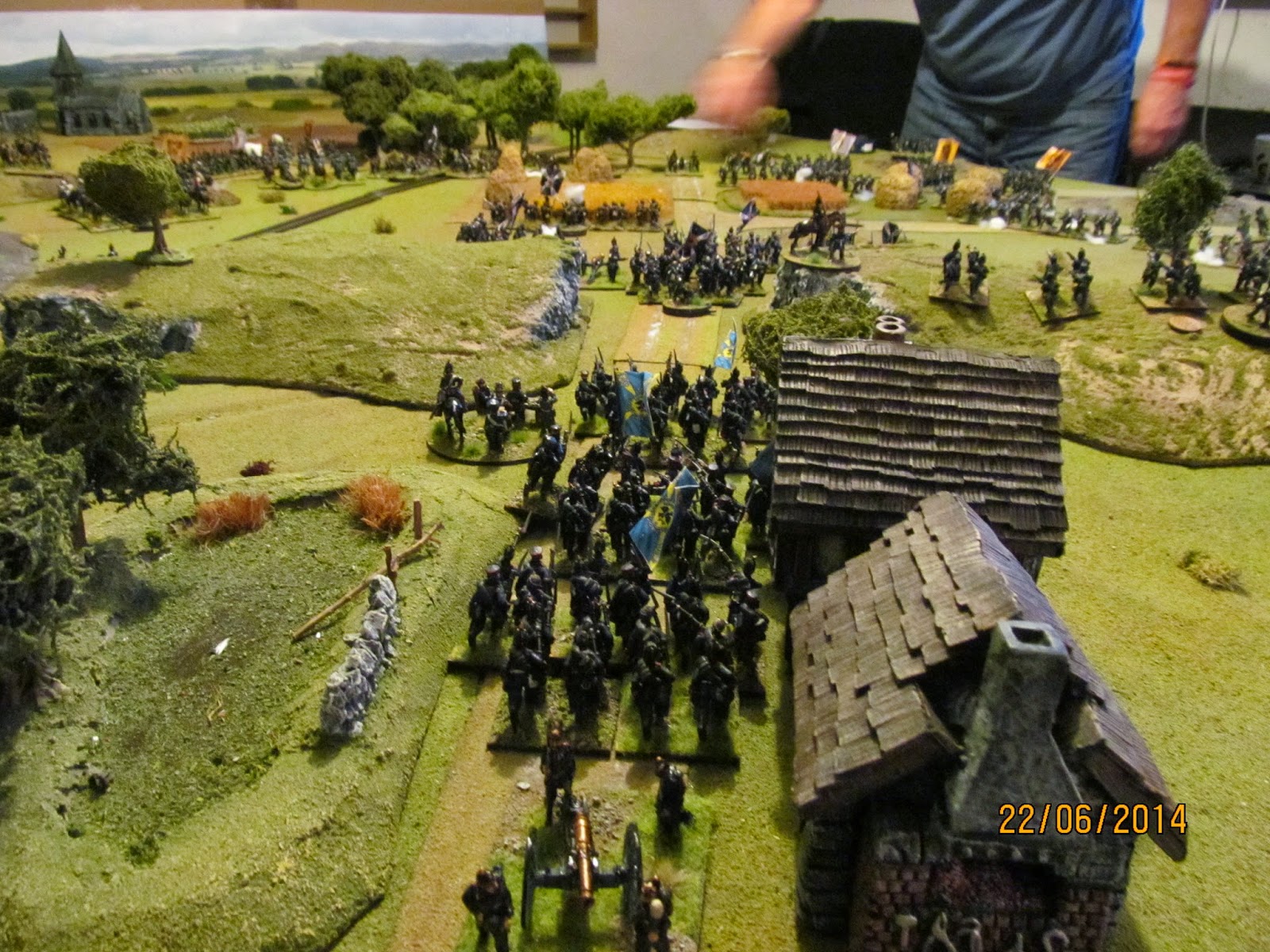 John and Rob had to leave at about 9:30 so the game came to a pause. Earlier in the game, around move 3, John had conceded defeat as he felt that there was no way the Prussians would be able to break through the cordon of Austrians and Saxons facing them. I reckoned John's CinC had been reading the 'Life of Frederick the Great' the evening before the battle and had only got as far as the Molwitz chapter and, taking a leaf out of the great man's book, had decided to withdraw. I was convinced otherwise (well I had created the scenario and was also quite high on Tramodol) and was sure that a concerted and concentrated push by the much superior numbers of Prussians would break through. We had played on anyway since the towel was thrown in so when John and Rob went home I carried on where we had left off, mainly as the bulk of the Prussians were uncommitted and also because in the context of the campaign, it was still mid- morning scenario time and the Prussians had plenty of daylight left and a schedule to keep, to press home another attack now that the Austrians and Saxons were all committed and spread very thin in an arc around their positions. 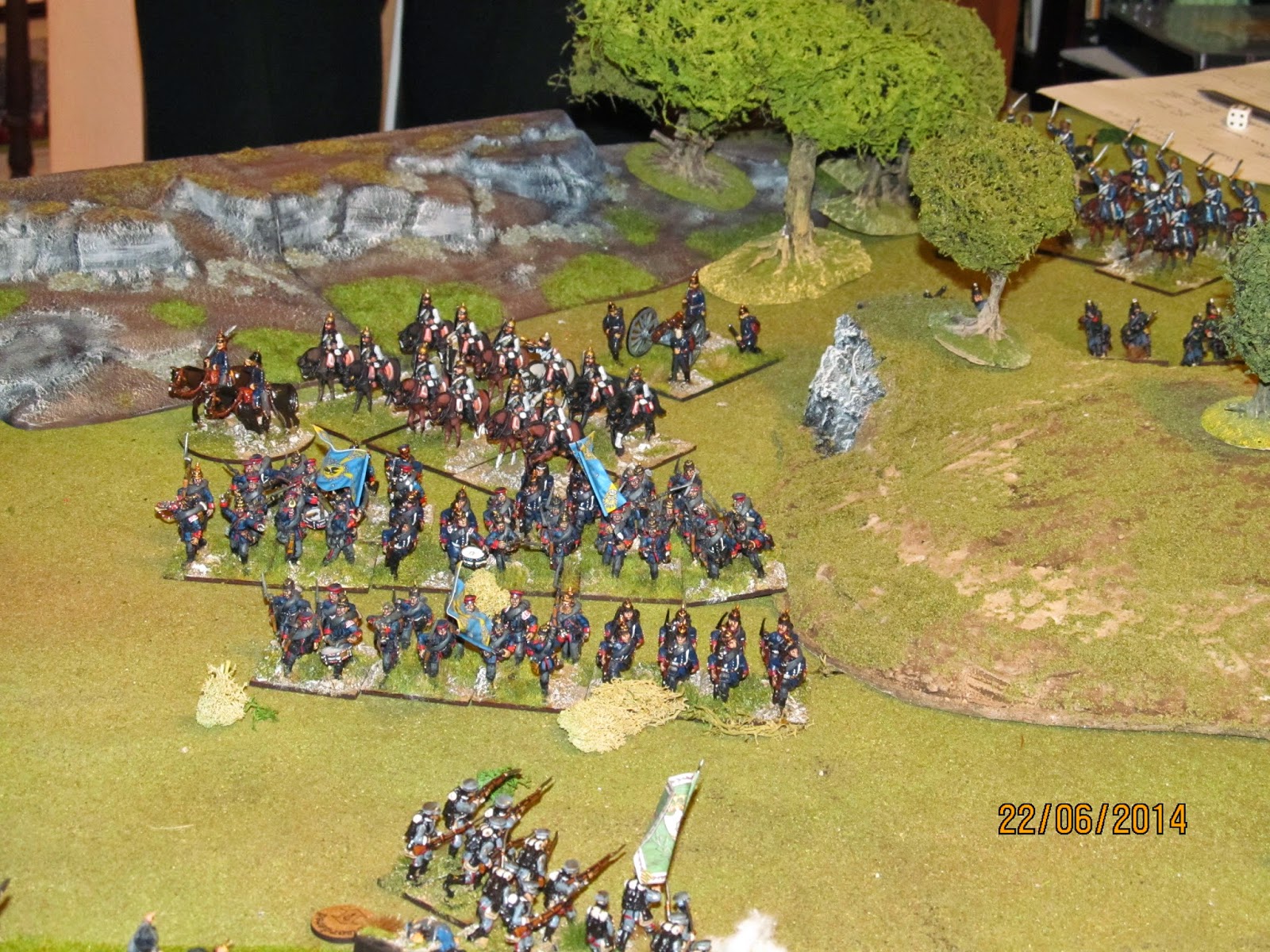 The first brigade of Prussian reinforcements had split. Part strengthened the Prussian centre while the other half moved to the right in readiness for an assault on the Saxon flank. The enemy cavalry had been cleared from this section of the battlefield and the Saxons were dangerously exposed with little in the way of supports. The Prussians charged the lead Saxon regiment (which was shaken) and the Austrian jager. The latter held for a move but the Saxons were broken and the Prussians then drove into the supporting artillery while another unit from the centre charged the next Saxon regiment. It too broke after two rounds of melee, causing the supporting units to either break or withdraw. That ended the game for the Saxons who were now a broken brigade. On the far left, the final Prussian brigade was almost ready to engage the Austrians but there was no need as with the loss of the Austrian 'advance guard' brigade and the Saxons the Austro/Saxon army had lost half of its brigades and was forced to withdraw. The Prussians had lost their 'advance guard' brigade and one brigade of cavalry but were in no danger of loosing another brigade as the shaken hussars had recovered. 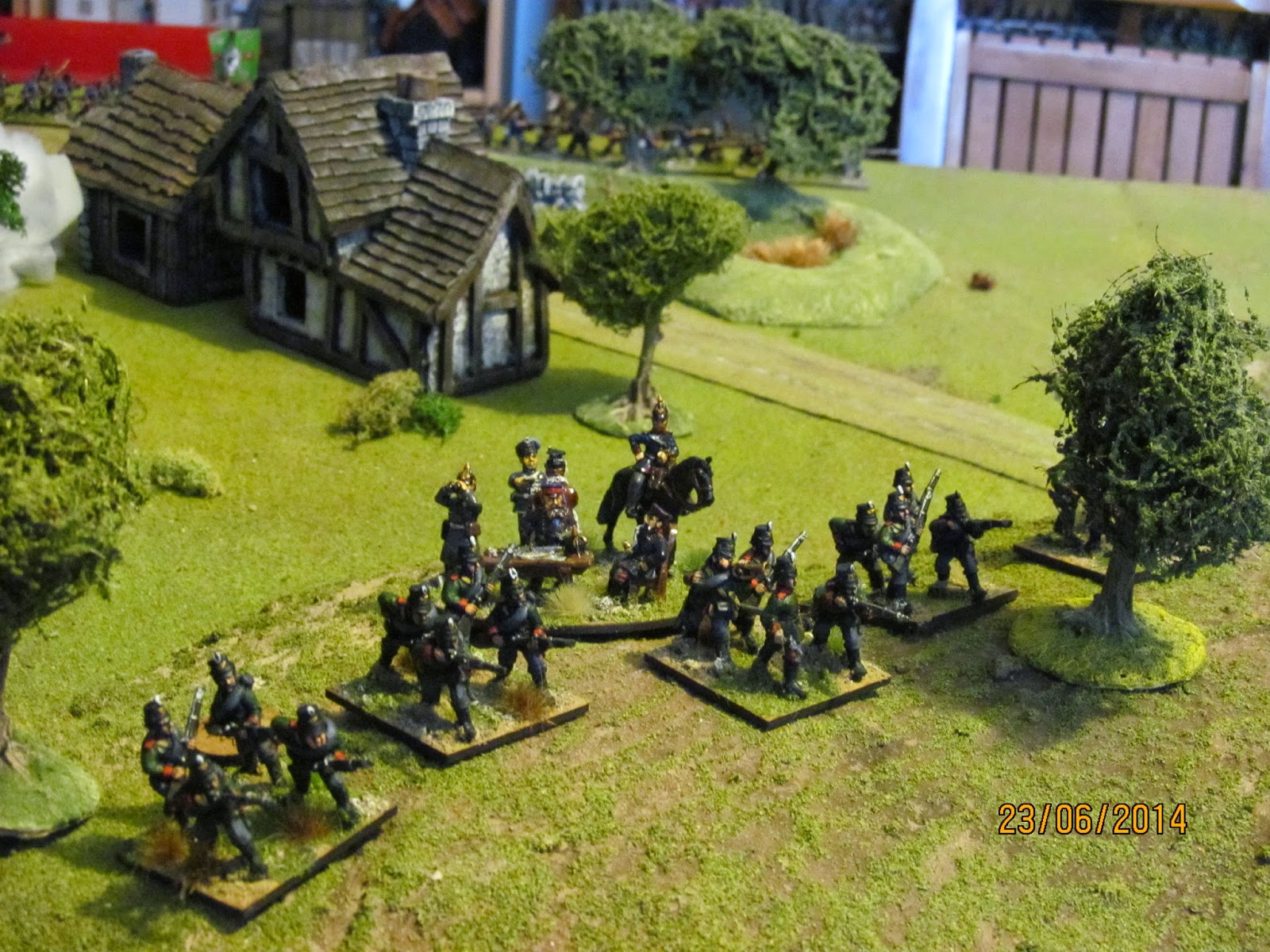 (Prussian Jager, shaken but still holding onto their hilltop, being encouraged by the Prussian CinC who was knackered after carrying that massive table up the hillside!) 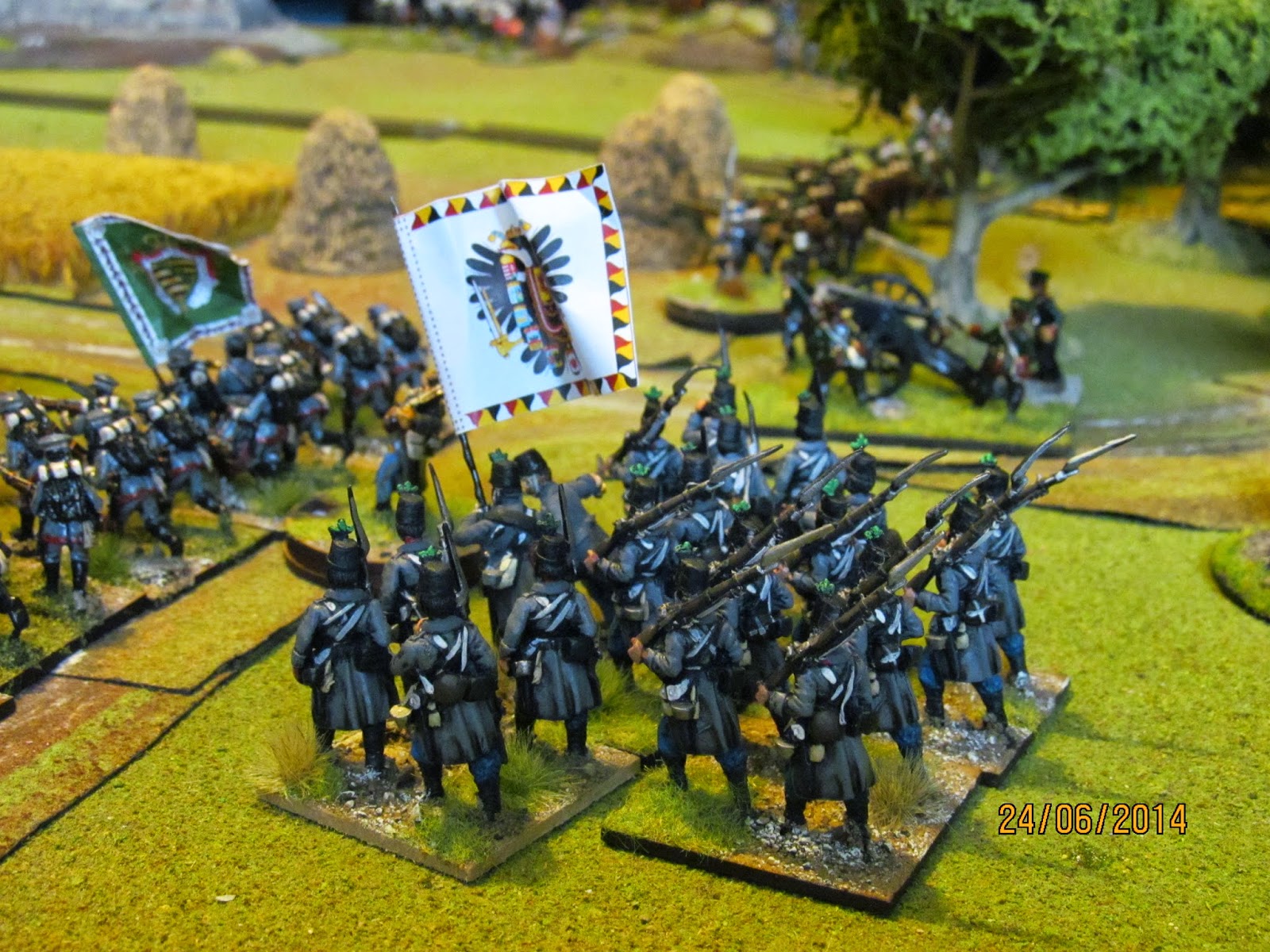 (Above, Austrians move to support the thin Saxon line while below, the Prussians surge forward) 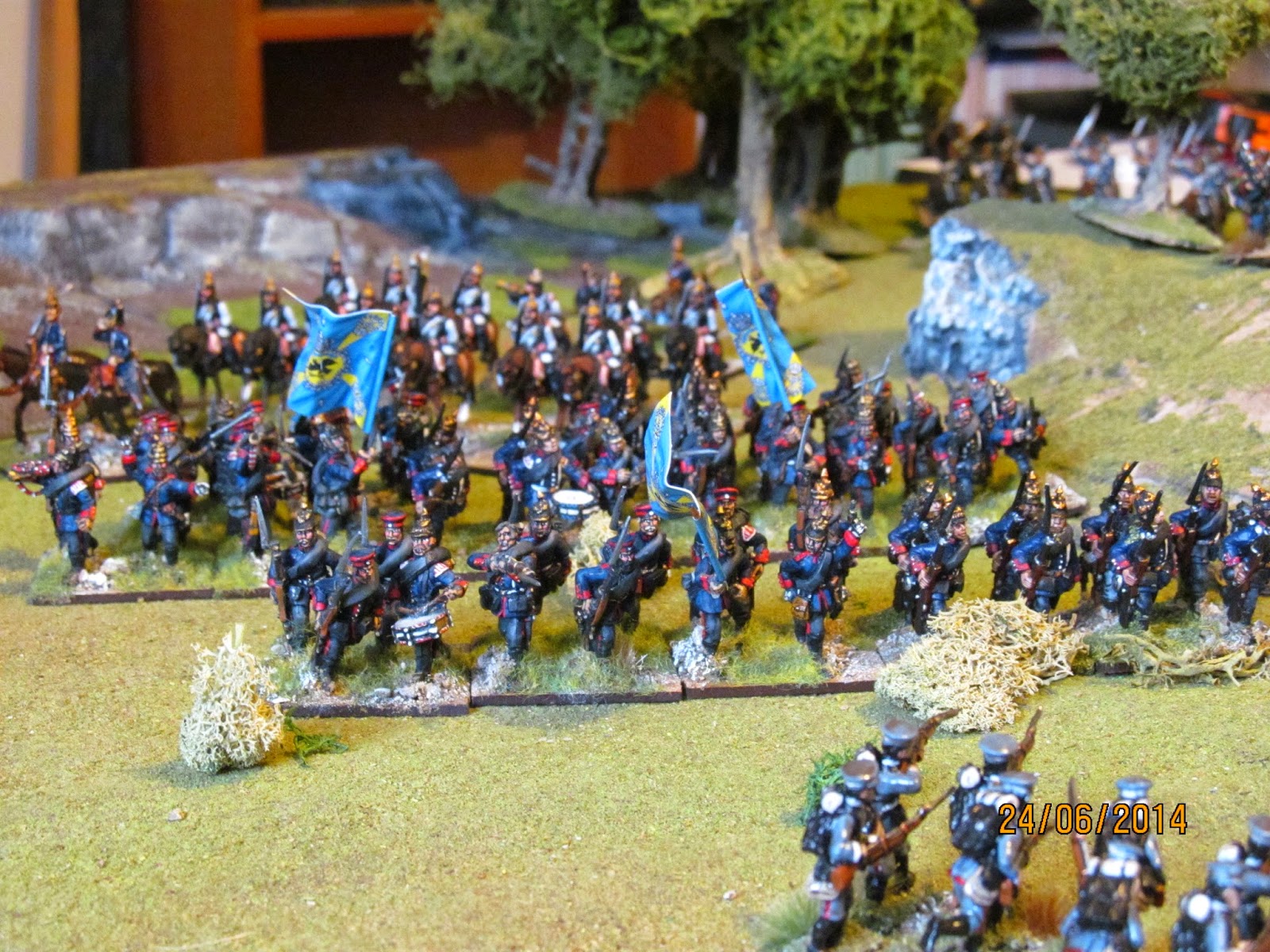 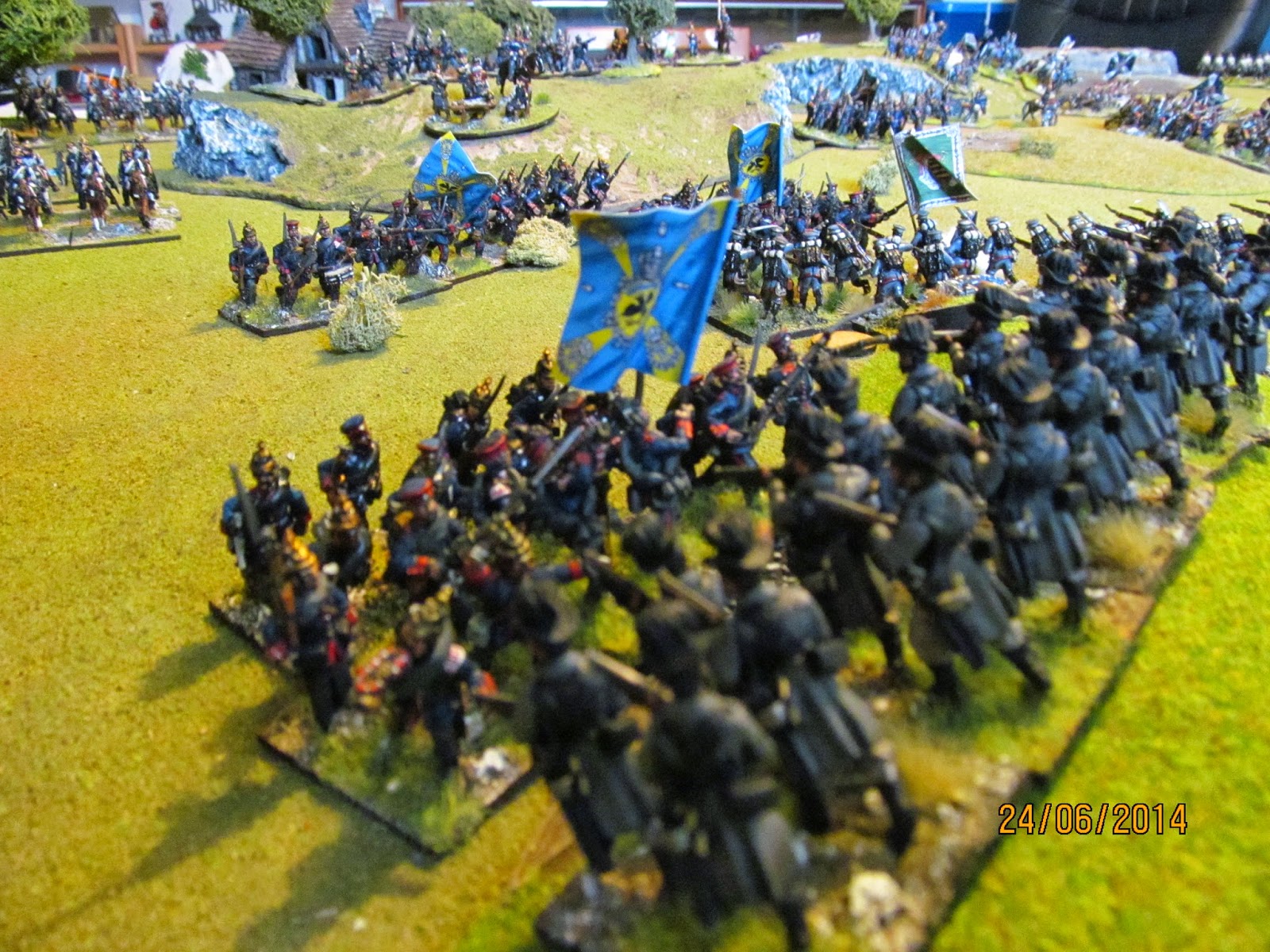 Above, the Prussians hit the Austrian jager who elected to close up and fight rather than evade, while below, Prussians and Saxons clash. 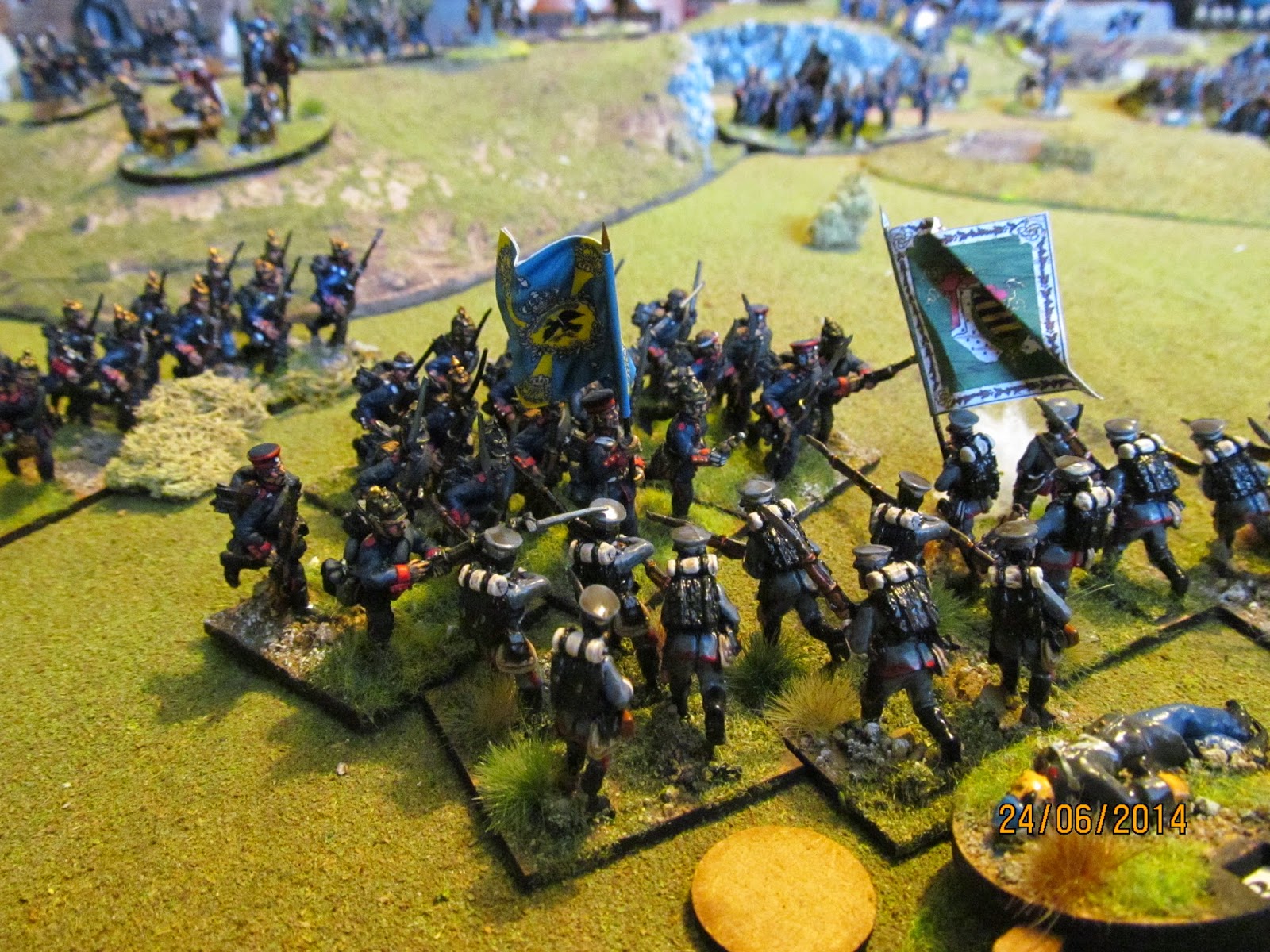 Above, the Prussians defeat a second unit of Saxons then below, overrun Austrian artillery in support) 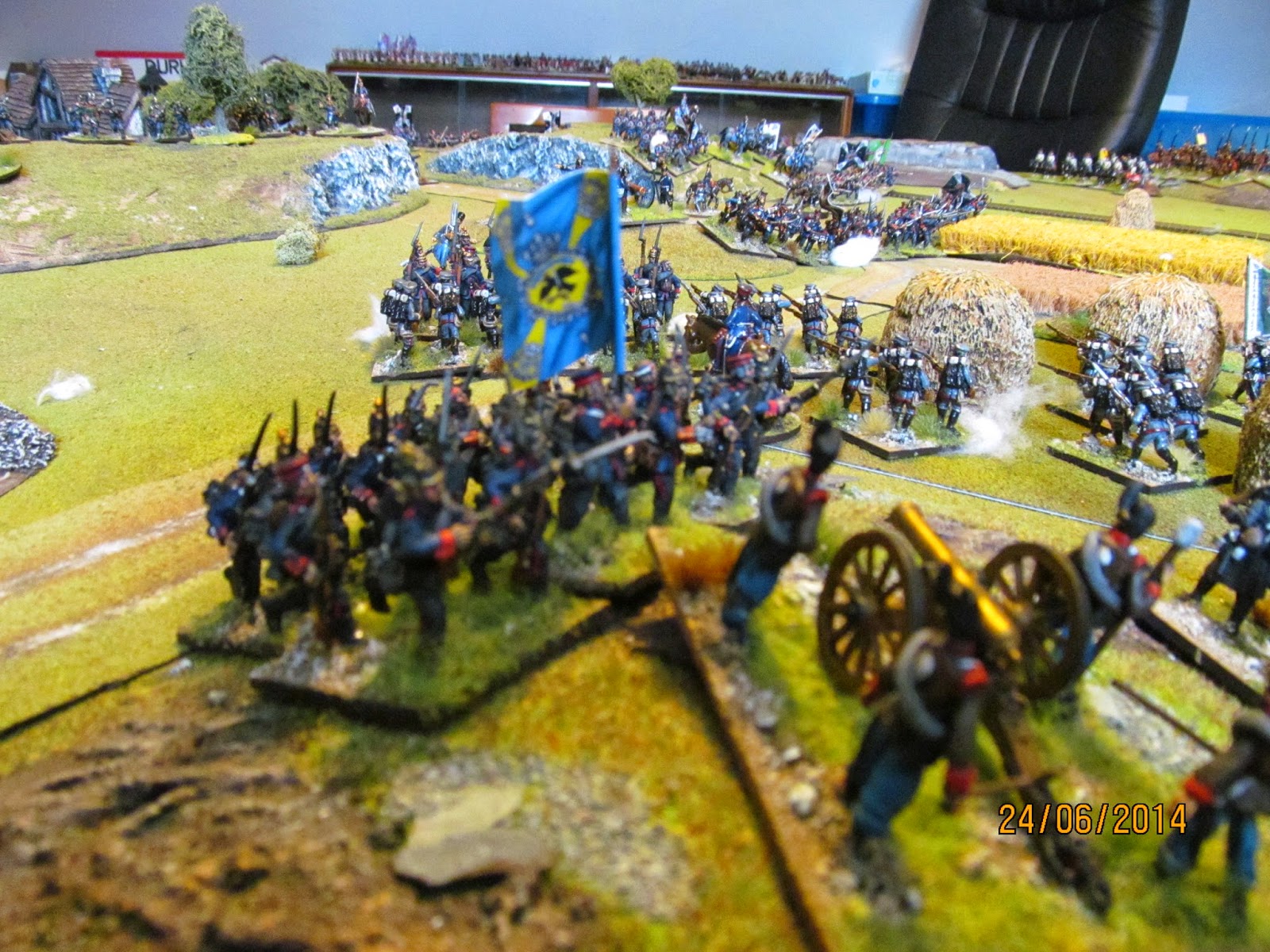 Again I think the rules worked well with the characteristics amended to reflect tactics of the period. Assault column was the formation to be in if you wanted to move your troops around reasonably easily but of course the Prussians needed to deploy into line to take advantage of their far superior rifles. Rob managed to throw 3 blunders during the course of a single move so rapid movement, at least in the right direction, was not guaranteed! Thanks to John and Rob for coming up for the game.

So, the main changes and amendments were as follows:

No troops were especially 'special'. Most were 'reliable' when in 'attack column' but apart from that, the armies were remarkably devoid of supermen! it was important to remember that tactical doctrine stressed 'assault columns' in attack, no choice for the Austrians but even the Prussians used them, but defending in line was acceptable.

Now that the frontier has been breached I have a couple more scenarios planned in this campaign based on the outcomes of the last three battles before hopefully trying to stage a big 'mash up' at some point later in the summer, probably at the Durham club as I will need a bigger table. Nigel and Conrad take note!
By Colin Ashton - May 25, 2014