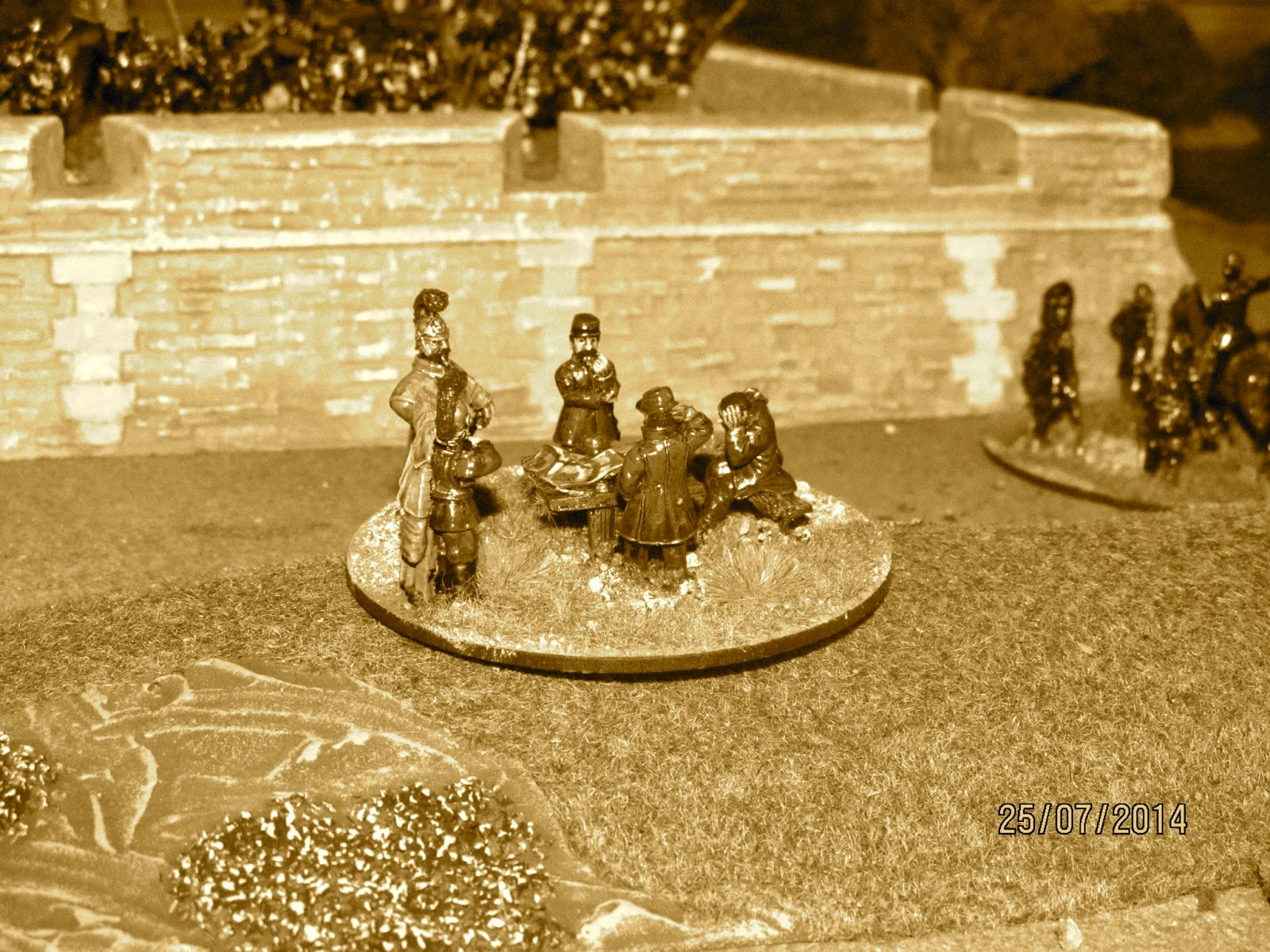 Over 20 years ago when I had a proper job I worked in the same company as a chap called Clive. Neither of us knew the other was a war-game player or collector, but recently through the magic of the war-games blogosphere we 'bumped' into each other again. Anyway, to cut a long story short I invited Clive up for a game this week. As I'm currently in the mood to try out as many of the scenarios in Charles S Grant's Tabletop Teaser book I thought I'd set another one up. I'd originally planned to set it in the Crimea but at the last minute, due largely to having finally got enough French completed (but also because I couldn't find the box with the British in under my table), I decided to move it 16 years into the future and to a sunny Alsace during the early days of the Franco-Prussian War.

In this version of the classic scenario, the French were tasked with denying the bridge to the Prussians long enough to prepare it for demolition, withdraw across the river into Metzburg or Sedatz or some other fictitious (or not) fortress city where they could be bottled up and surrender ignominiously, and then blow the bridge.

The forces available were as follows.

The command levels were decided randomly so its a shame that the French cavalry ended up with poor commanders for both brigades, which was to prove decisive in the the game.

The French had to hold the Prussians off long enough for their engineers to prepare the bridge for demolition. Once ready, they would have to wait for the order to set the fuses and blow the charges, at which point it'd be a race against time to get as many troops across the river before the bridge vanished in a cloud of dust and debris. The Prussian objective was to seize the bridge before the French could blow it or to prevent too many French from escaping by keeping them from making an organised withdrawal. All these points in time were dictated by the alarm on my phone and a few dice rolls. Tense stuff eh?

We threw for sides and Clive got the French. There were three roads onto the table that the Prussians could enter on. Two were on the short edge furthest from the bridge, the other was close to the top corner and much nearer to the bridge. Where and when (and which brigade) the Prussians would enter was to be decided for randomly. 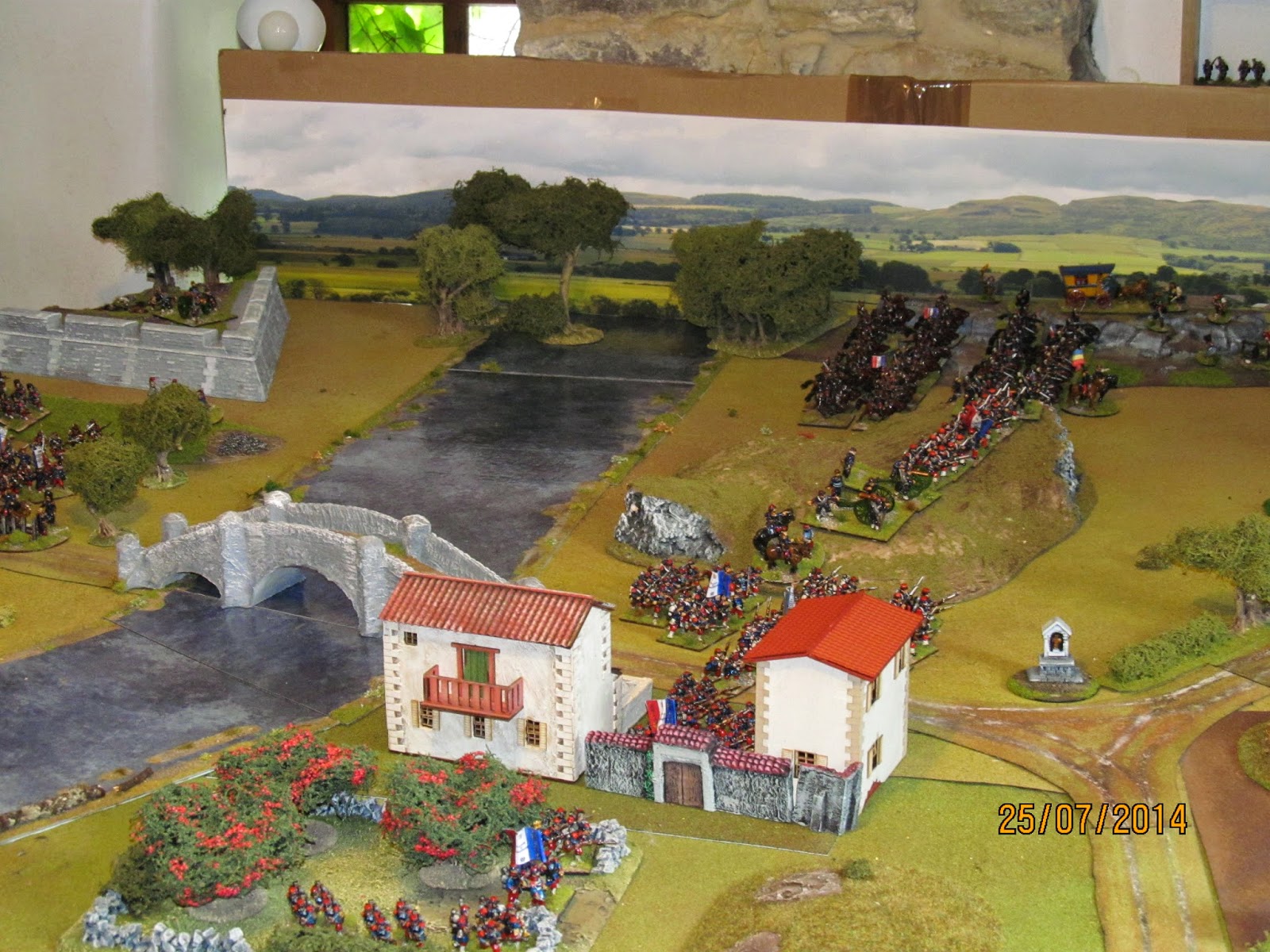 (Above, French dispositions on the south bank defending the bridge, while below, a close up of the Cuirassiers of the Reserve Cavalry division. Prussian entry points were off the top right hand/south east corner and from the north or south west, about six feet below the bottom of this picture) 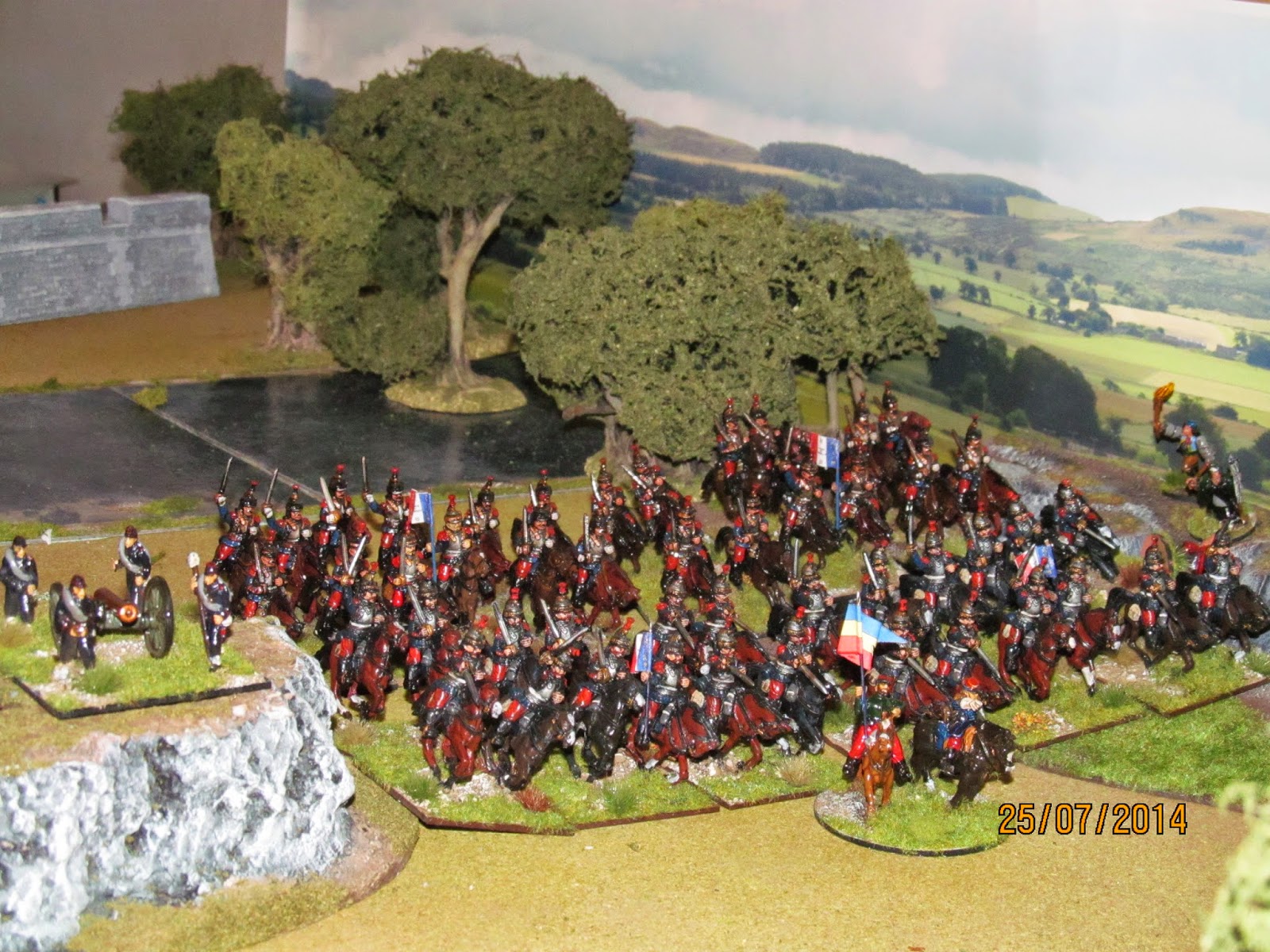 The first couple of moves saw the Prussian cavalry and a brigade of infantry enter on the north western entry point while a brigade of Bavarian cuirassiers entered on the south western road. The French countered by moving their reserve cavalry division up past the village, which was put into a state of defence by a battalion of infantry. The remainder of the French deployed behind the village in case the Prussians made an entry from the south east, and on the ridge line and orchard west of the village. 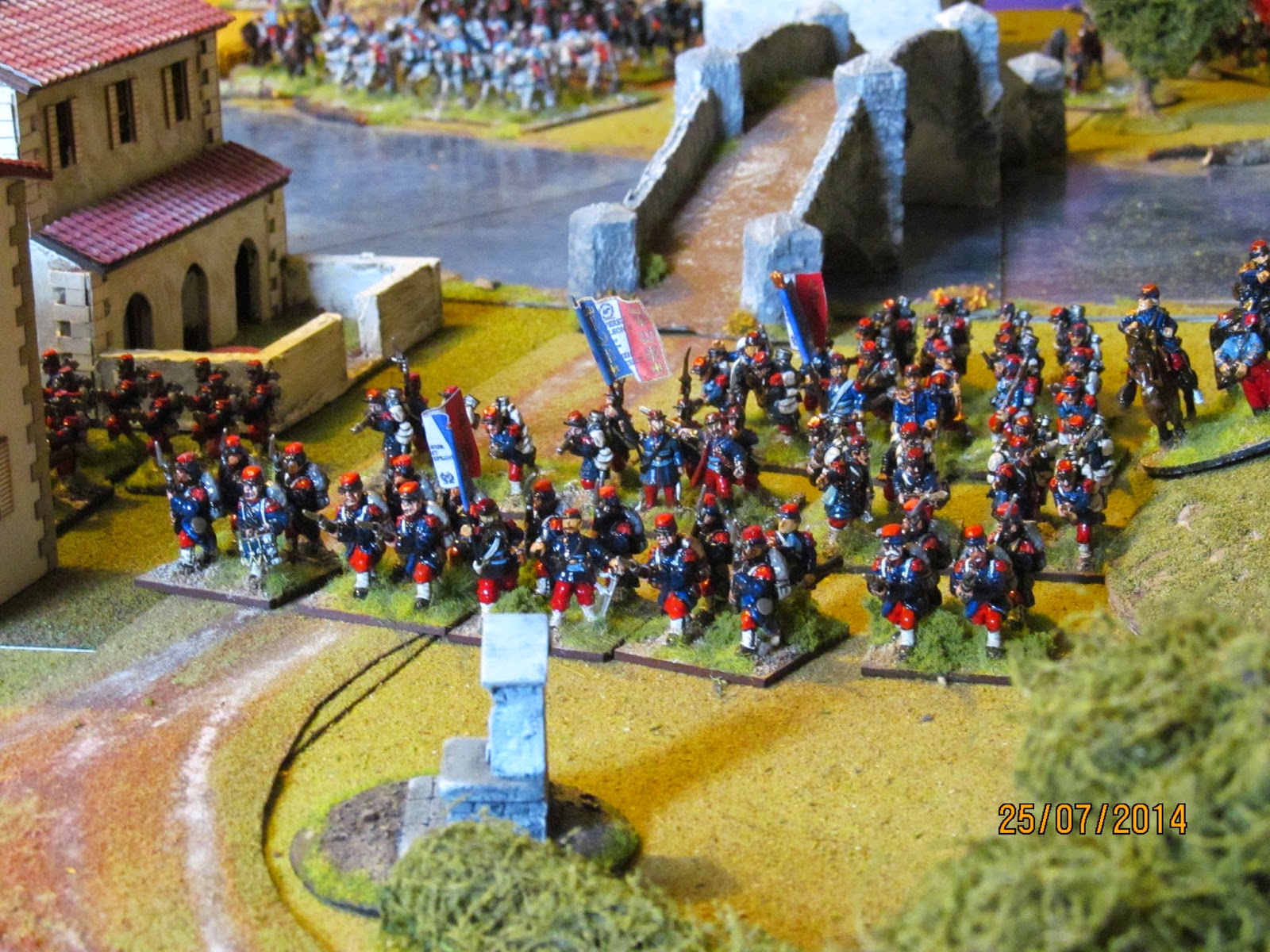 (Above, the French deploying to defend the village. Below, heavy artillery on one of the fortress's outer works covering the bridge) 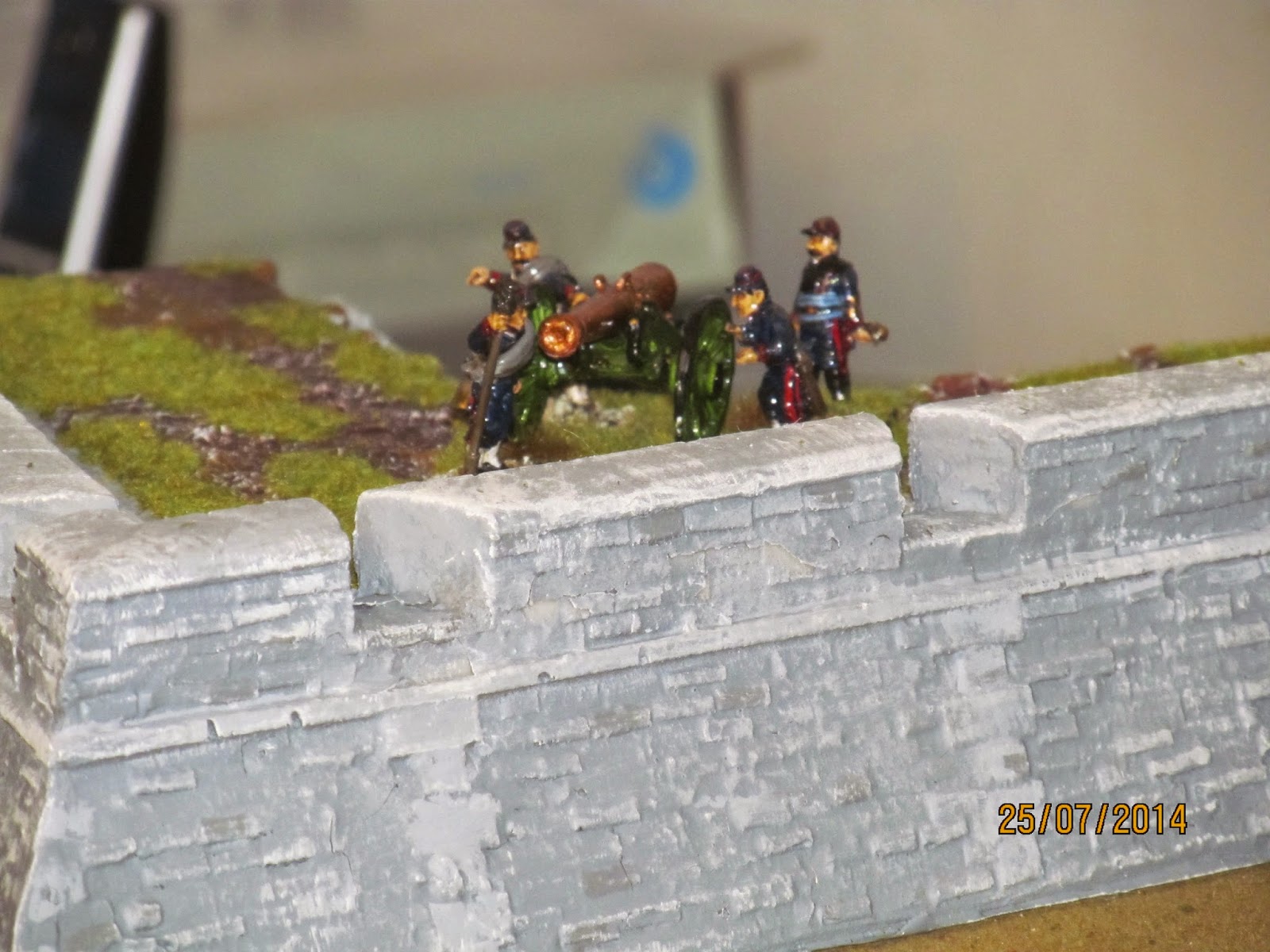 The Bavarian cuirassiers crossed the river by the bridge, formed up and charged the lead unit of French cuirassiers. The slightly smaller 'Irregular miniatures' figures struggled against the much more chunky 'Hero's of the Dark Age' models (no, seriously, the Bavarians lost the melee due to a very obvious lack of enthusiasm when it came to saving rolls and had to take a break test) and were thrown back, but the French were also shaken and chose to withdraw. 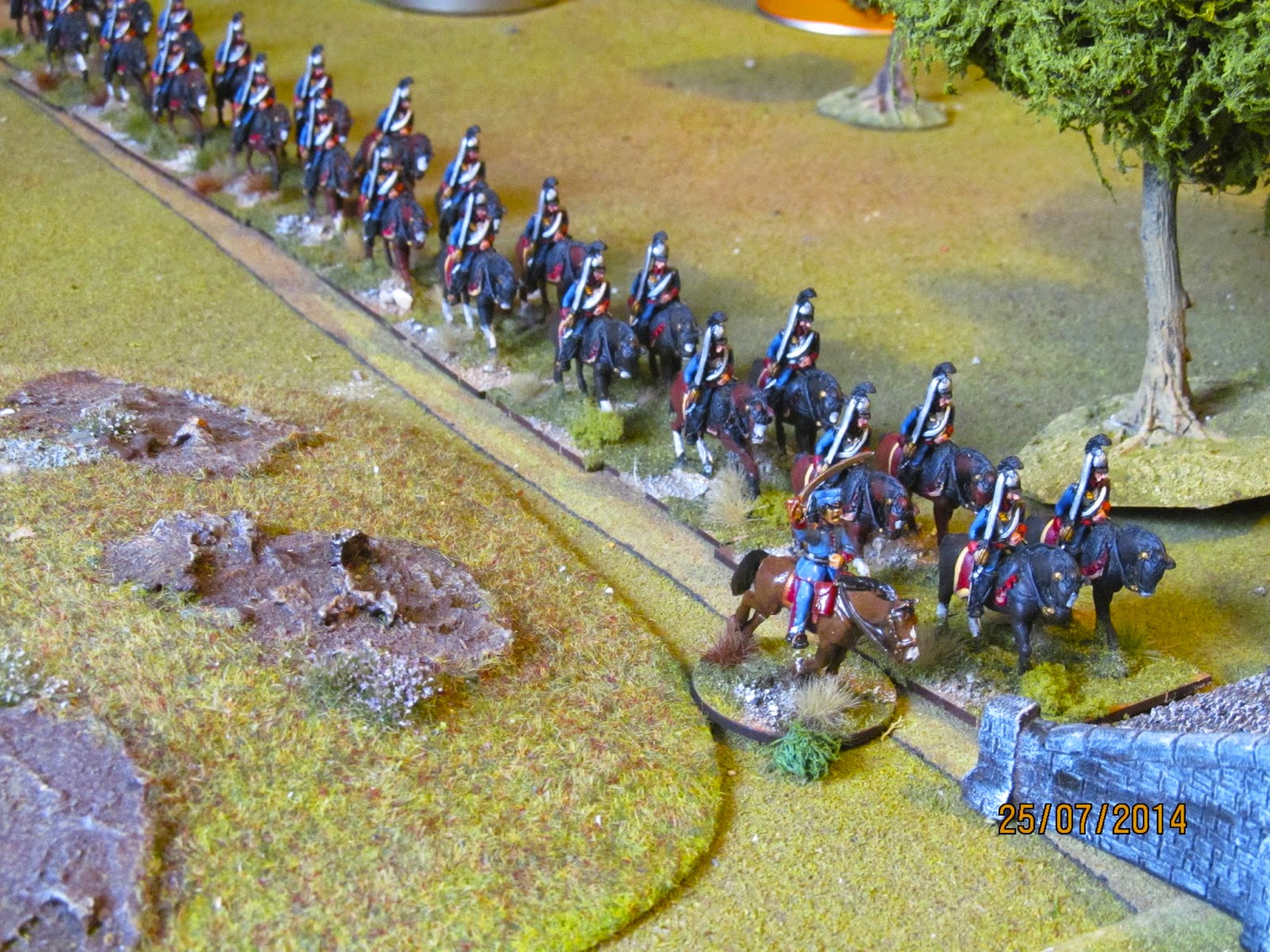 (Above: Bavarian cuirassiers march onto the battlefield. Below: The French Cuirassiers thunder towards the Prussians and finally engage in a short sharp melee with the Bavarians) 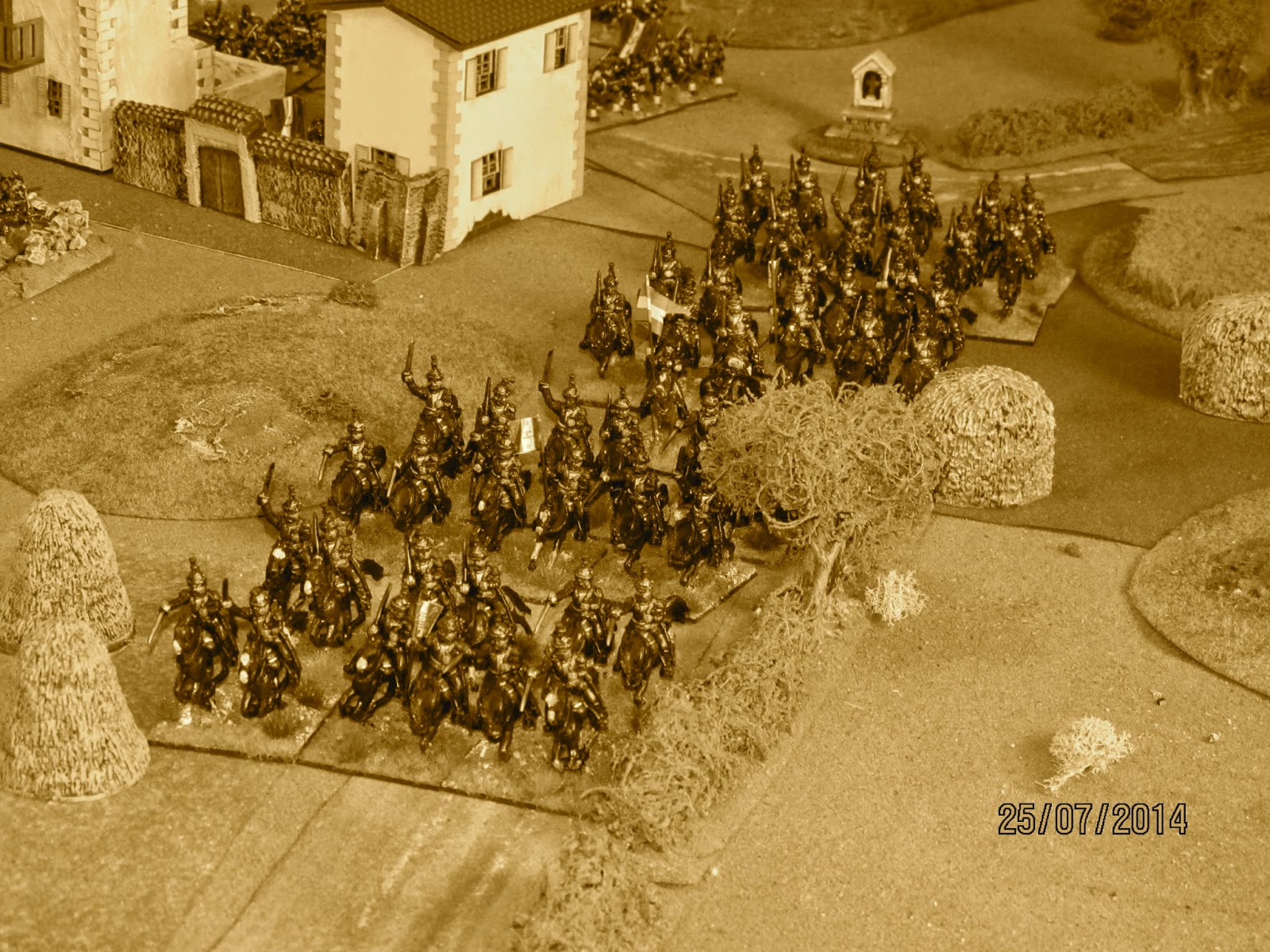 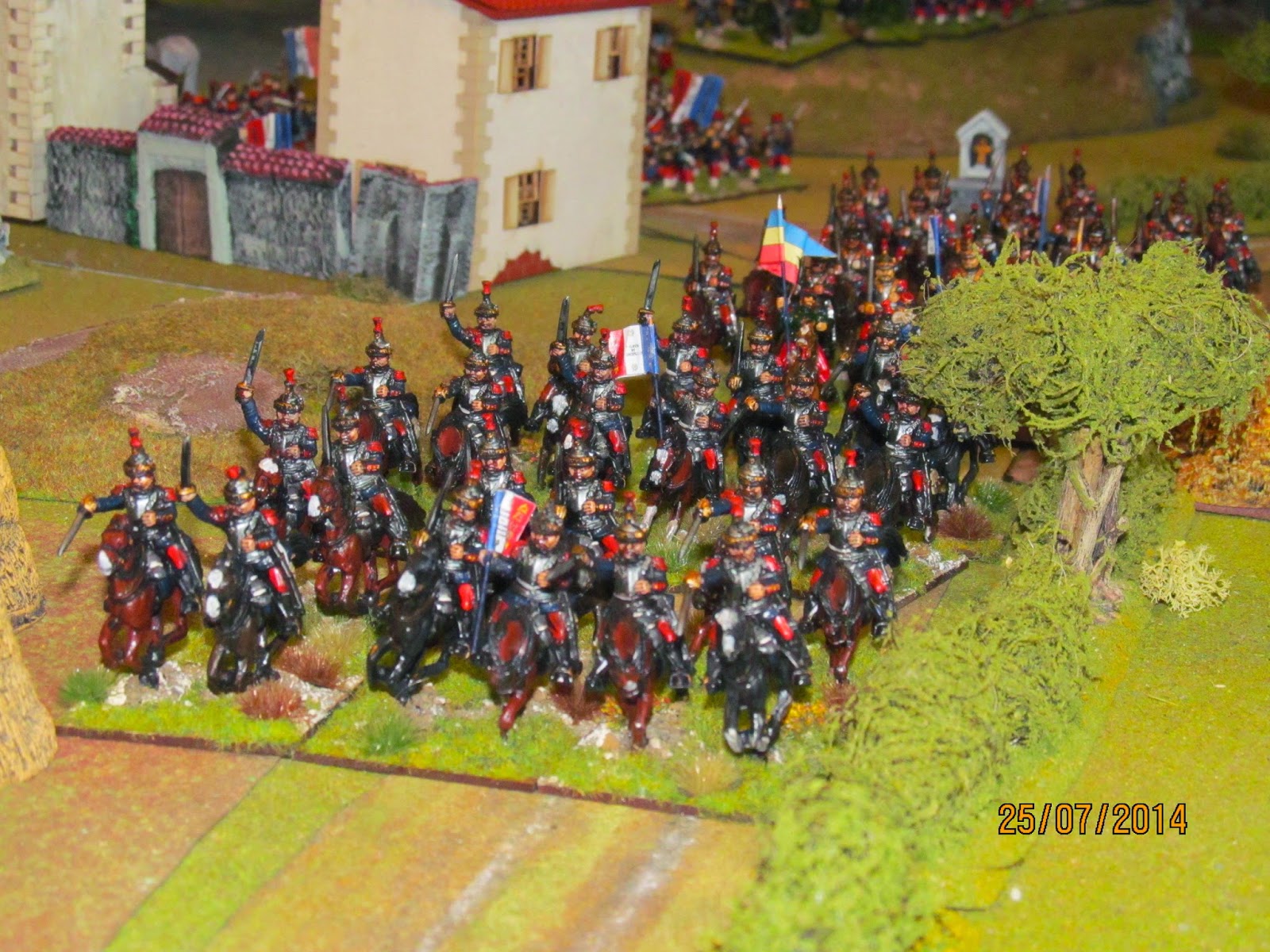 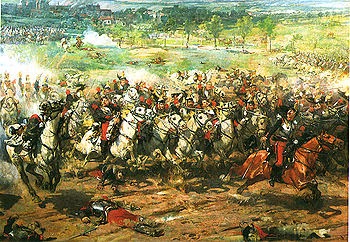 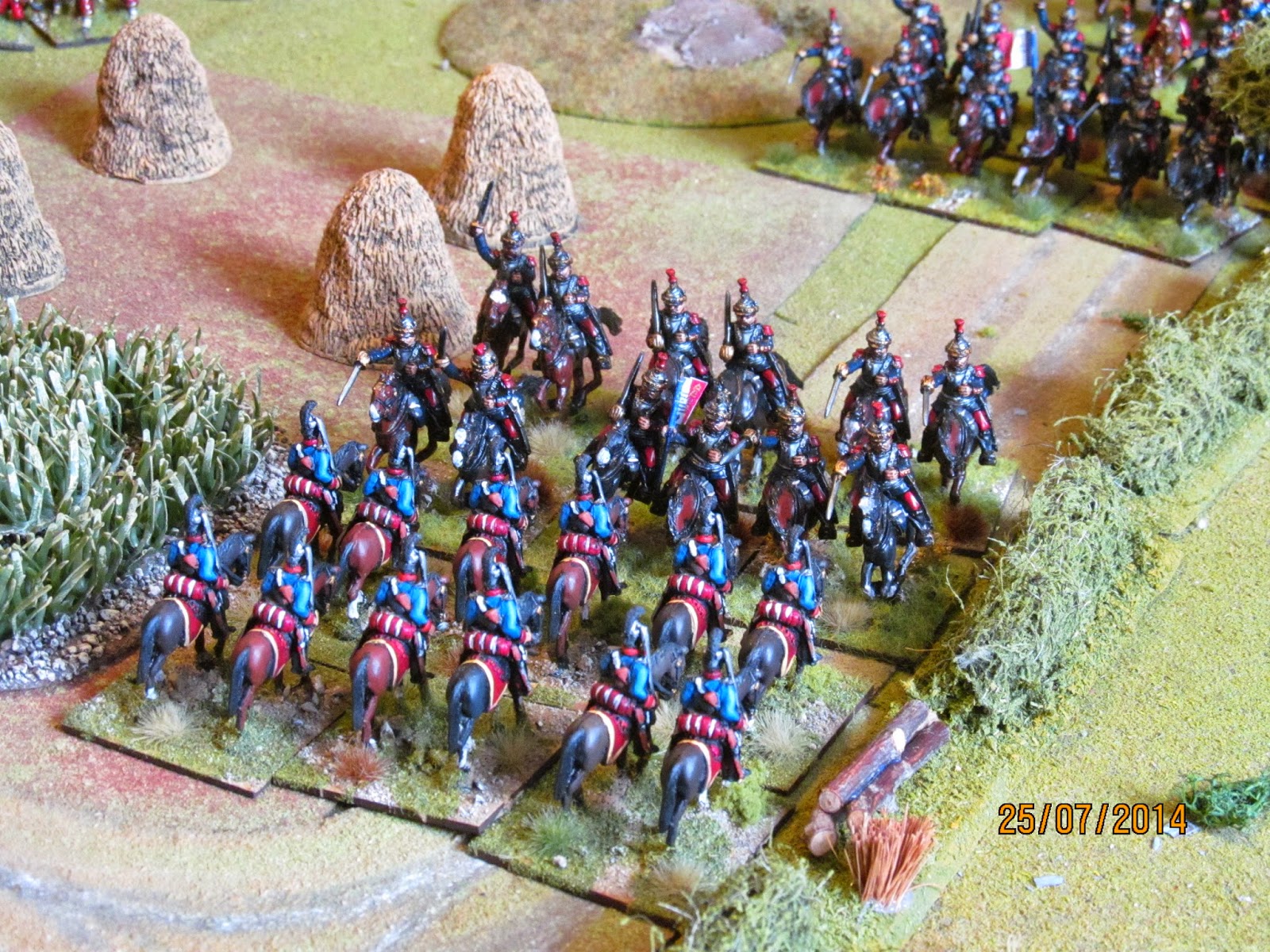 Meanwhile the Prussians were steadily forming up and attempting to close with the French. The superior chassepots did severe damage to several battalions, breaking one and pinning another, but once the Prussian artillery got into play the damage was repaid with interest. A battalion of French Marine infantry were destroyed by a maelstrom of artillery fire and two battalions of zouaves were pinned or shaken on the ridge. Slowly the Prussians gained the upper hand and drove the exhausted Zouaves back to the shelter of the orchard and village. 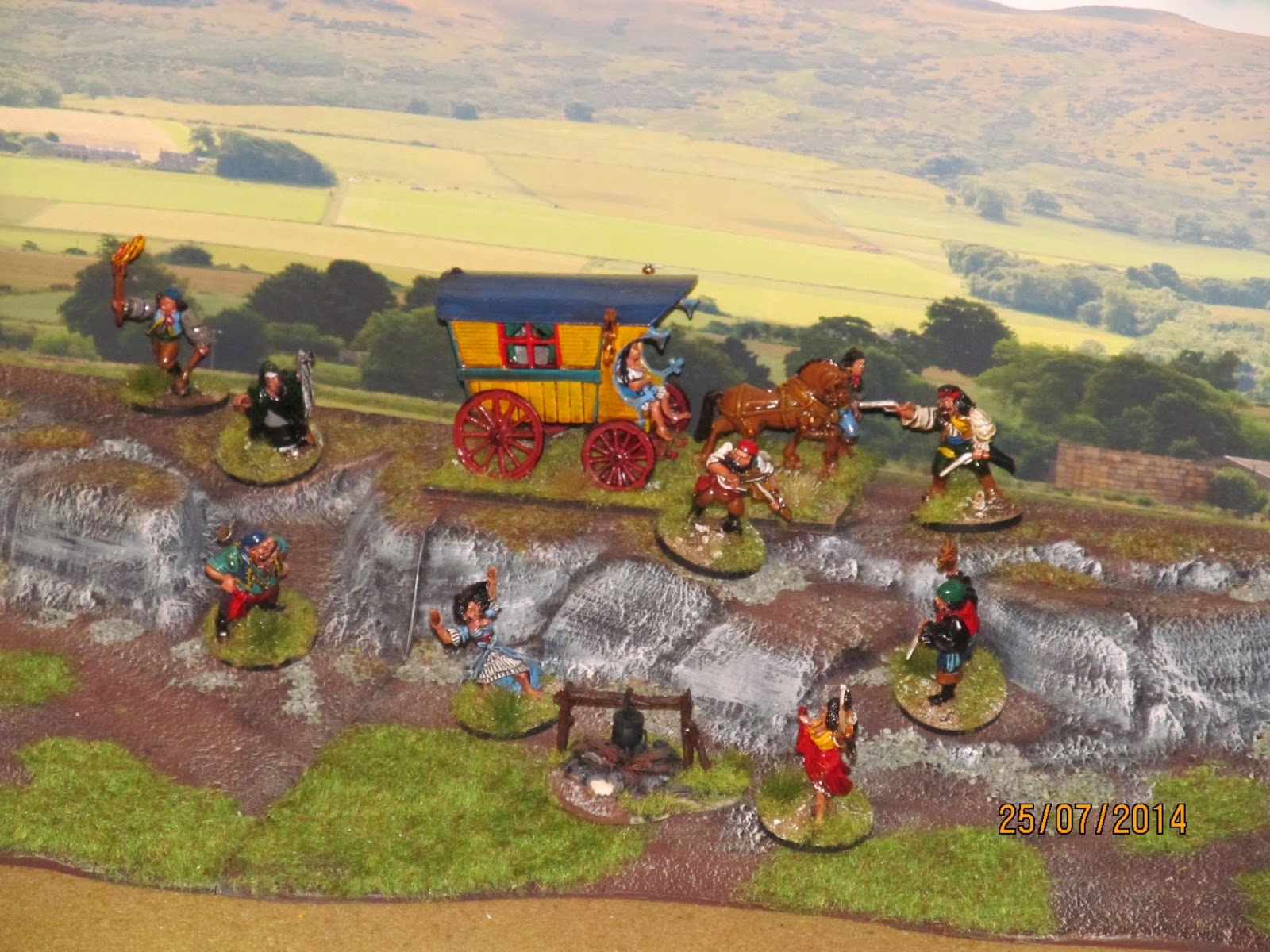 (Above, its those Gypsies again........ while below the Imperial Guard march across the bridge to lend support to the defence of the south bank) 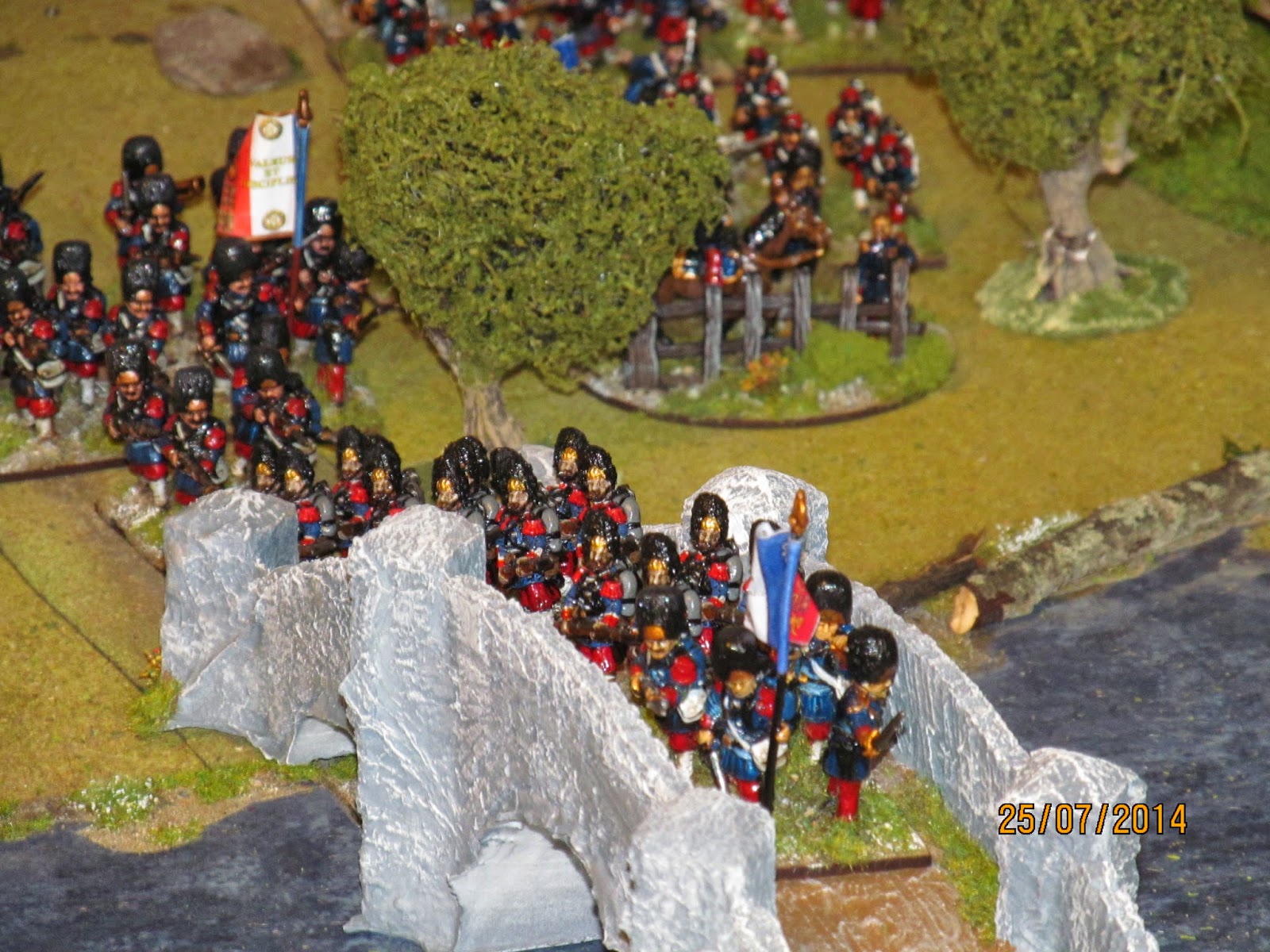 Clive decided to commit the Guard to help support the troops across the river. They formed column and marched across, only for one battalion to blunder and head off to the east. More Prussians and Bavarians arrived on the western entry-points and when it became clear that none would be entering from the southern road, the Guard were quickly withdrawn back to the safety of the north bank. 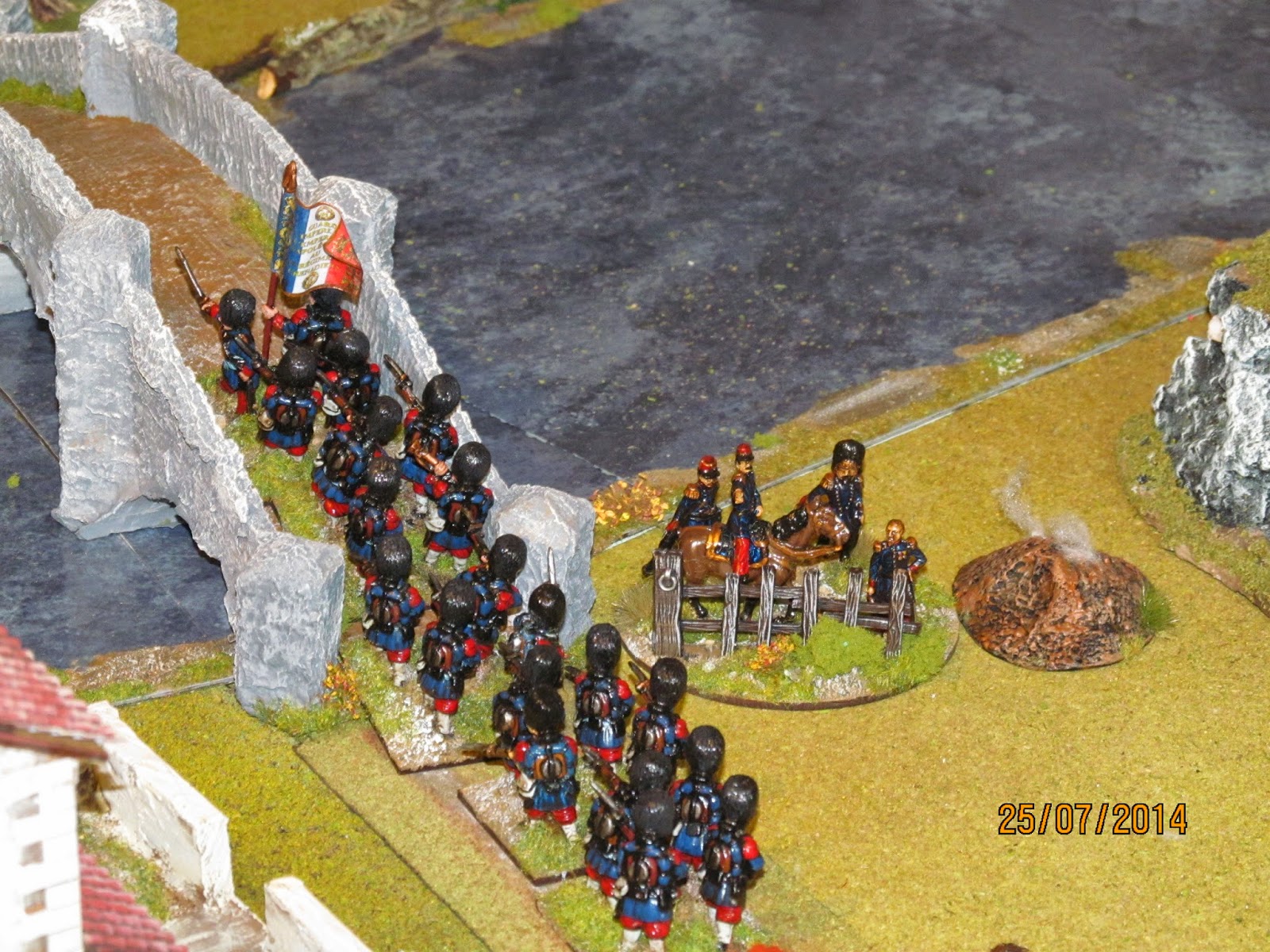 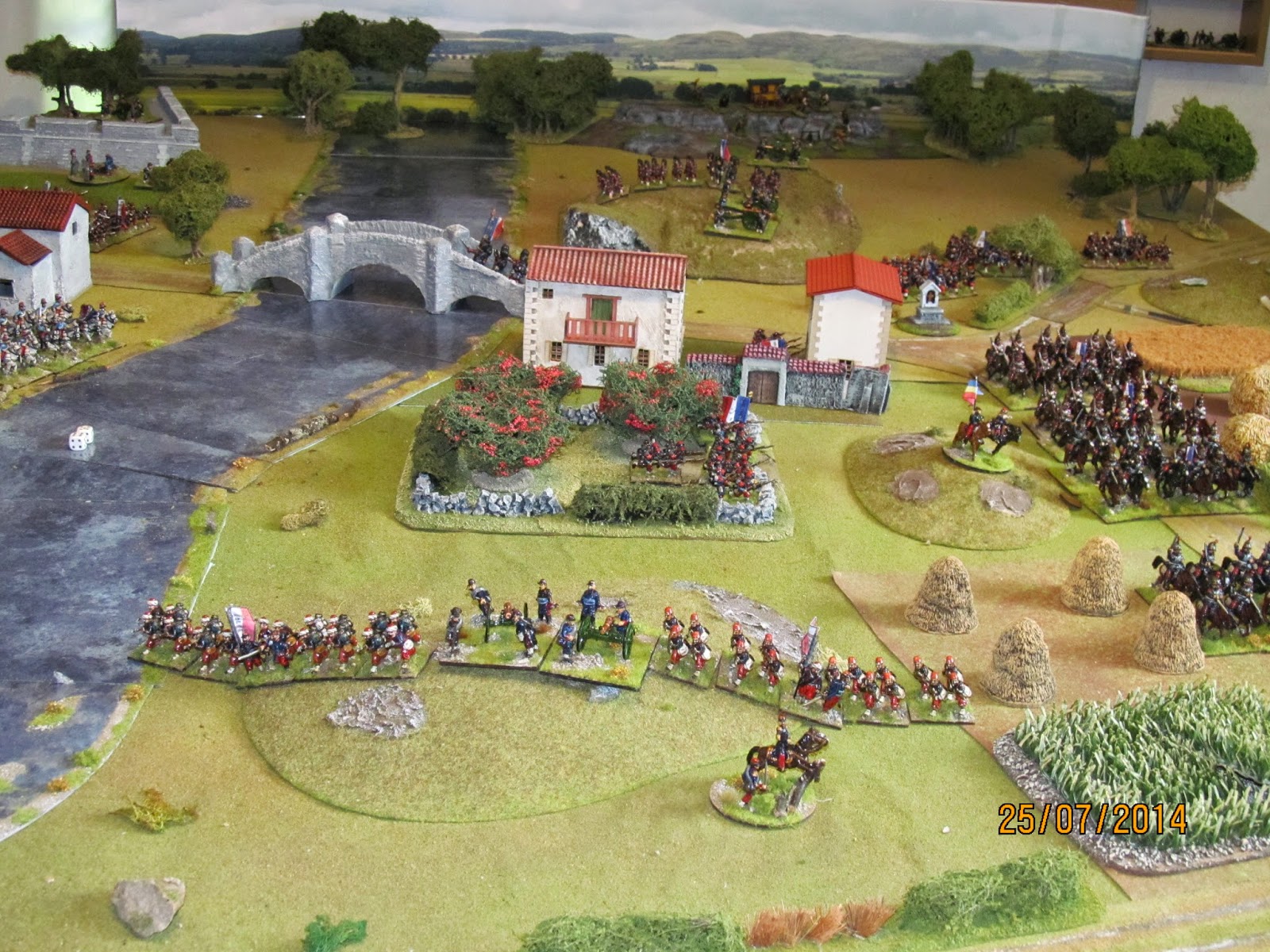 (Above, the French ready to try and and ultimately fail to throw the coming Prussian attack back. Below the Prussian cavalry manoeuvring into position after I remembered the small river was fordable!) 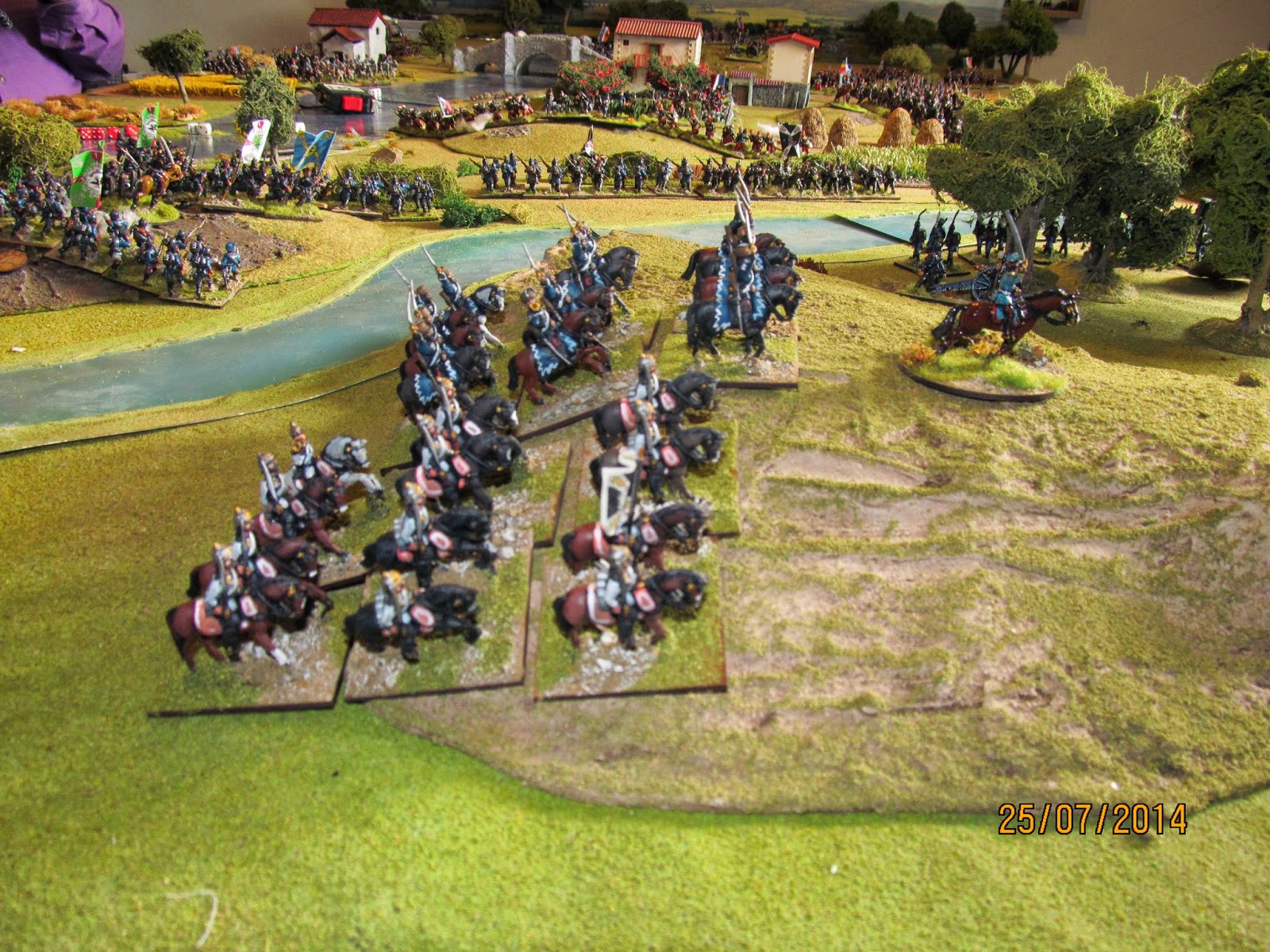 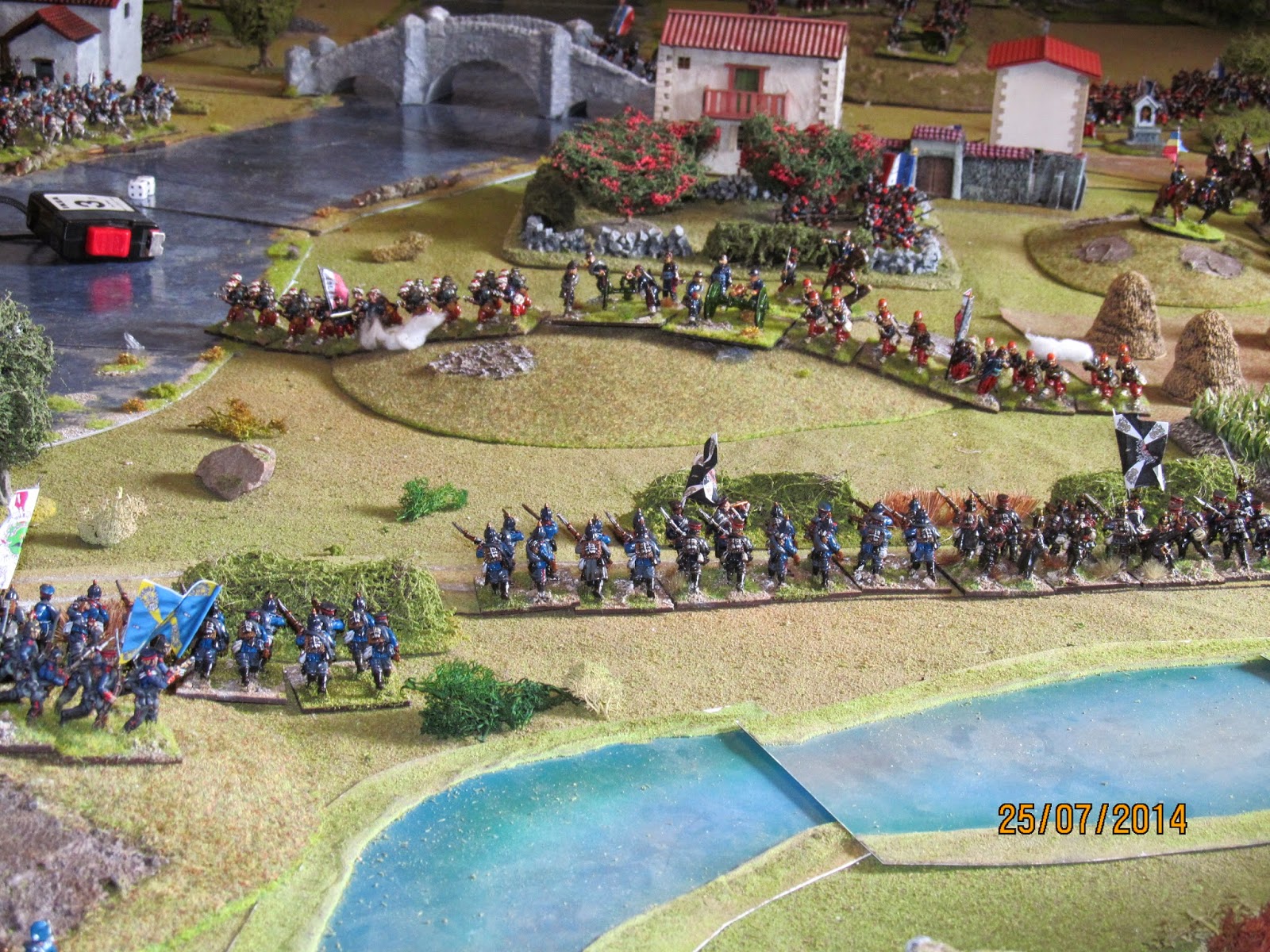 (Above, the Prussian second wave attacks the French line, the first having been stopped in its tracks or repulsed. Below, the Bavarians deploy in preparation for their attack. Before anyone asks, the Bavarians shown are painted for the 1866 campaign in which they dispensed with the Raupenhelm and wore a soft peaked cap instead. My 'proper' FPW-uniformed Bavarians are not quite ready). 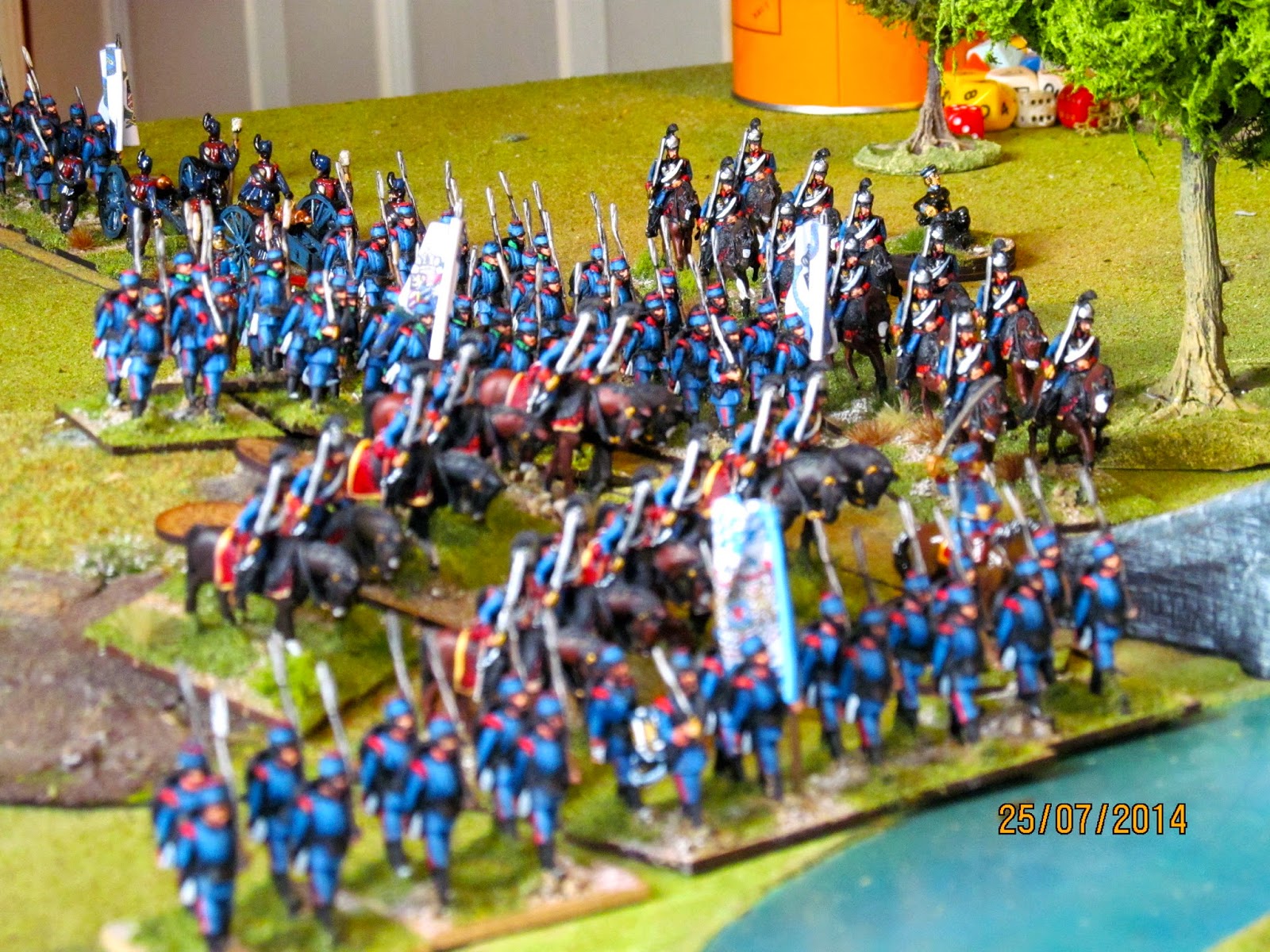 At around this point I suddenly remembered that the stream in front of my Bavarian brigades was in fact easily crossable, so having got over my 'Burnside Antietam moment' I deployed as quickly as my unenthusiastic Bavarians would allow me. The opposing cuirassiers clashed again, and my second unit of Bavarian cuirassiers were forced back shaken. Thankfully the French were in no position to pursue so I was able to slowly deploy in the face of an increasing number of French infantry which had moved up from behind the village. 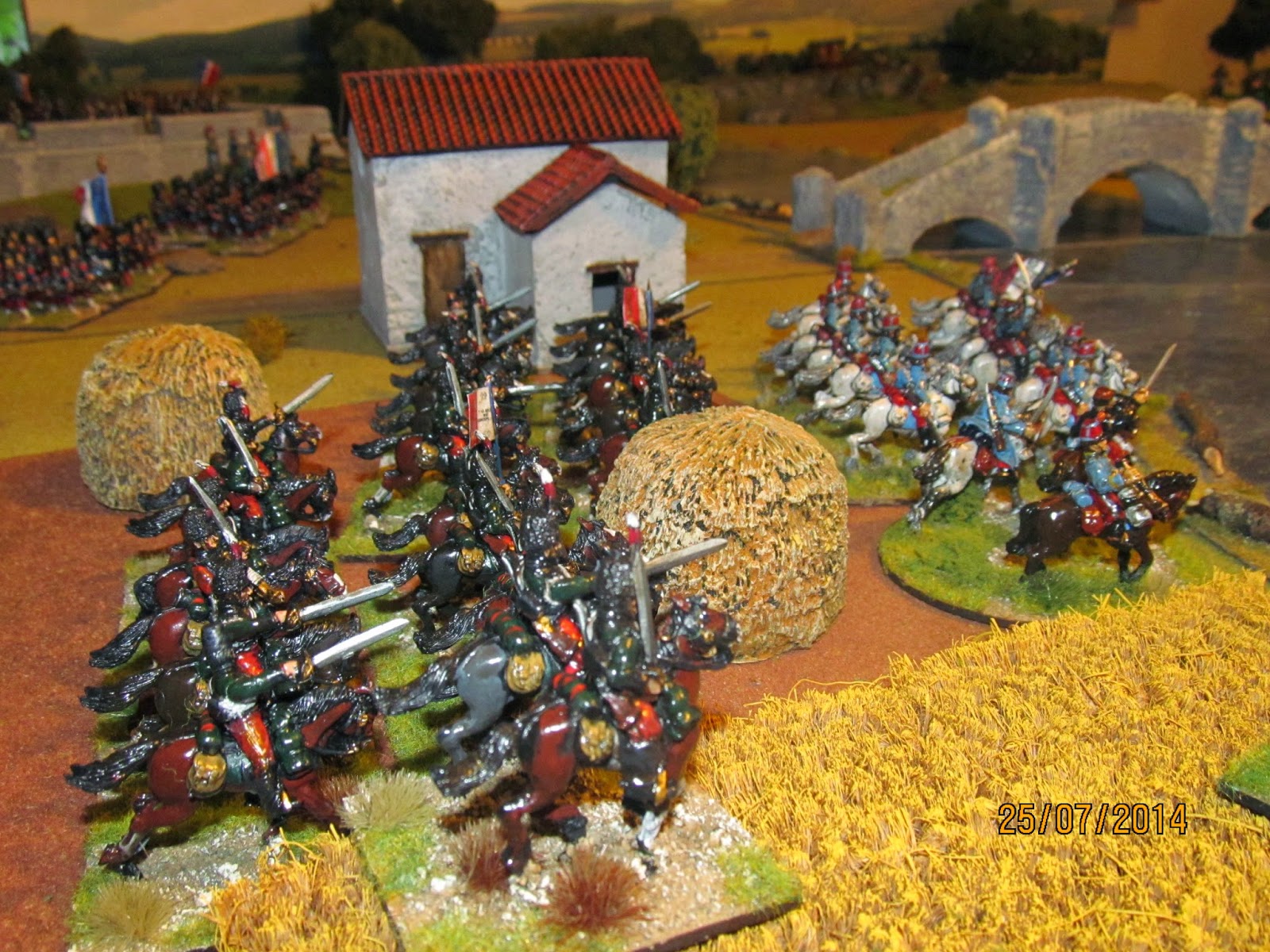 (Above, the French light cavalry brigade that spent the entire battle with nowhere to go. Below, the Imperial Guard reformed after their brief road-trip across the bridge and back again). 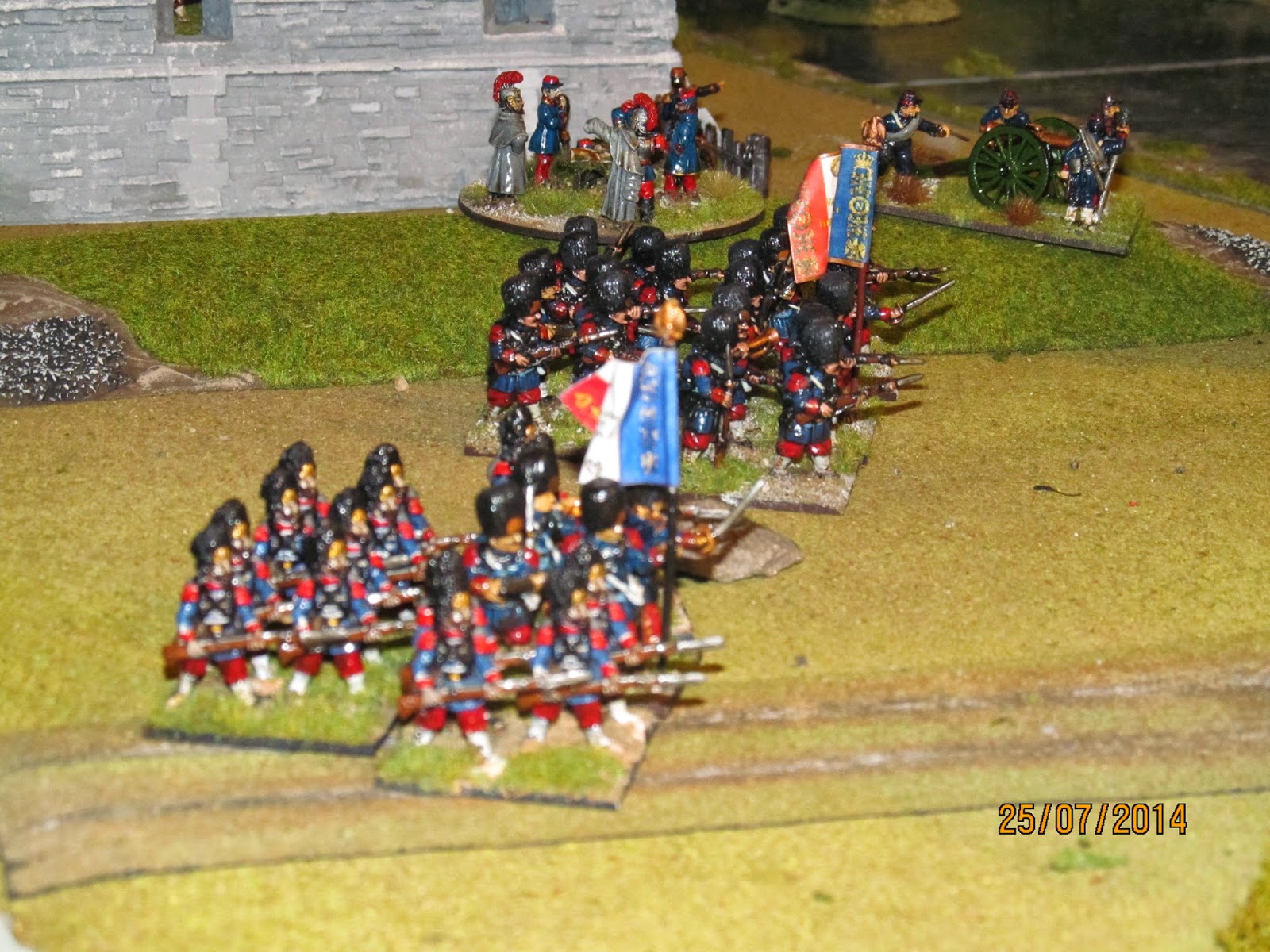 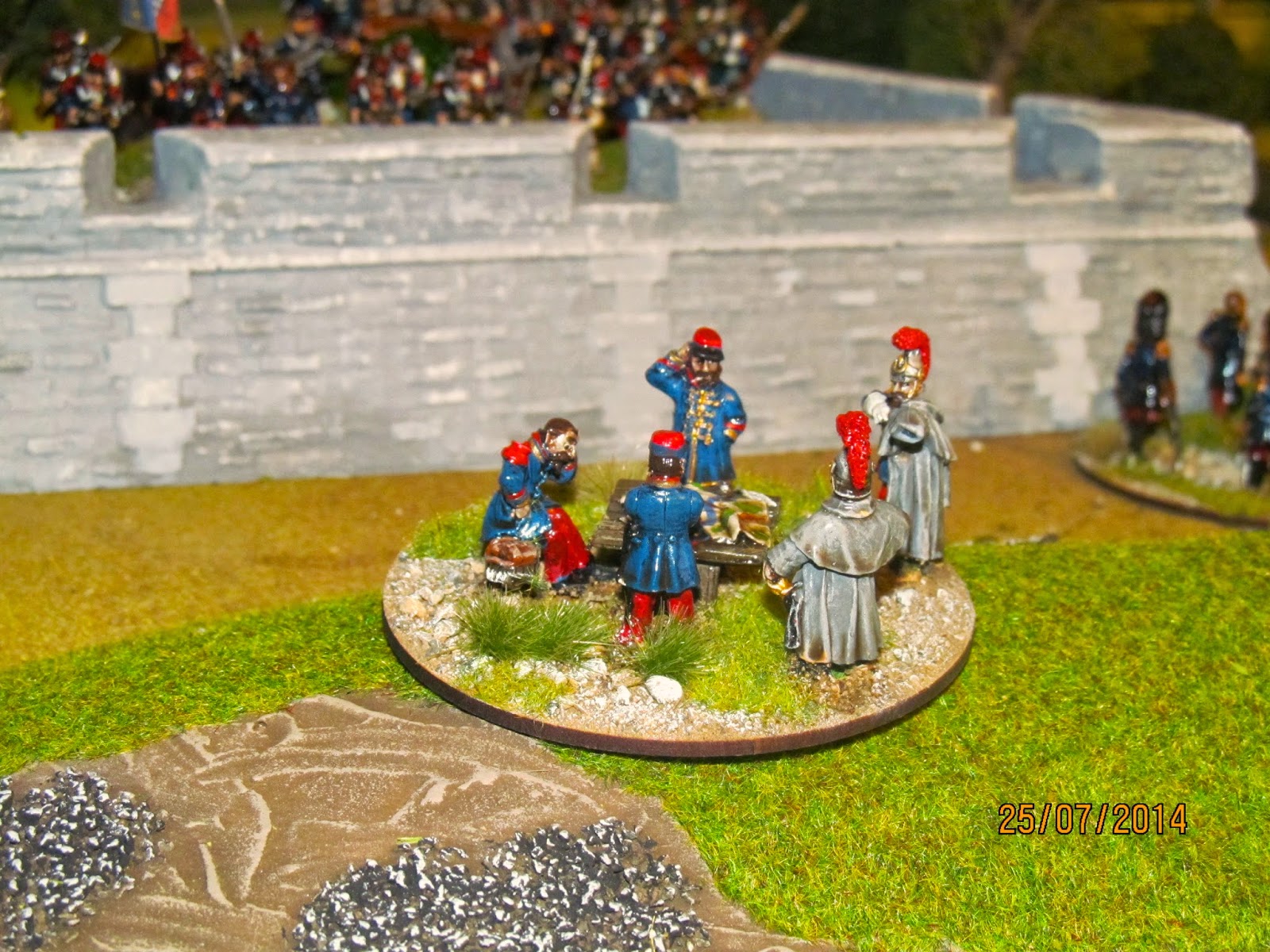 (Above, the French CinC ponders, head in hands, wondering what wine to have with 'le dejeauner', while below the Prussians succeed in their final assault to drive the French back, off the ridge and out of the orchard). 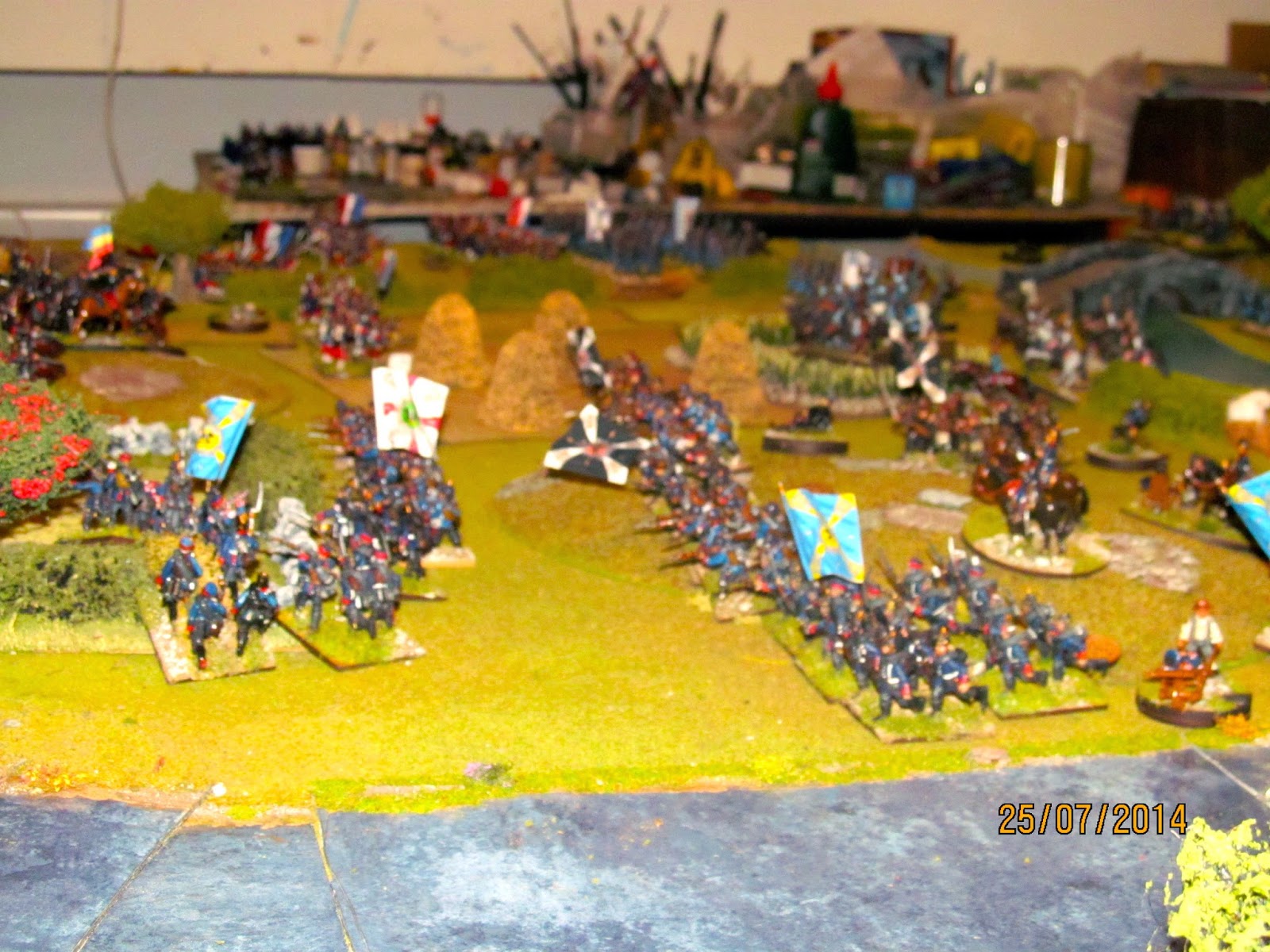 The Prussians finally got into position to assault the withdrawing French in the orchard which they managed, albeit not without losses. The French were ejected but fell back to the village. At about this time there was a massive explosion as the French engineers blew the bridge, trapping the remaining French on the wrong side of the river. Clive tried to launch his cuirassiers in a final series of charges to buy some time for his infantry to retire but sadly, and luckily for the cuirassiers, they failed to move largely due to their poor commander. 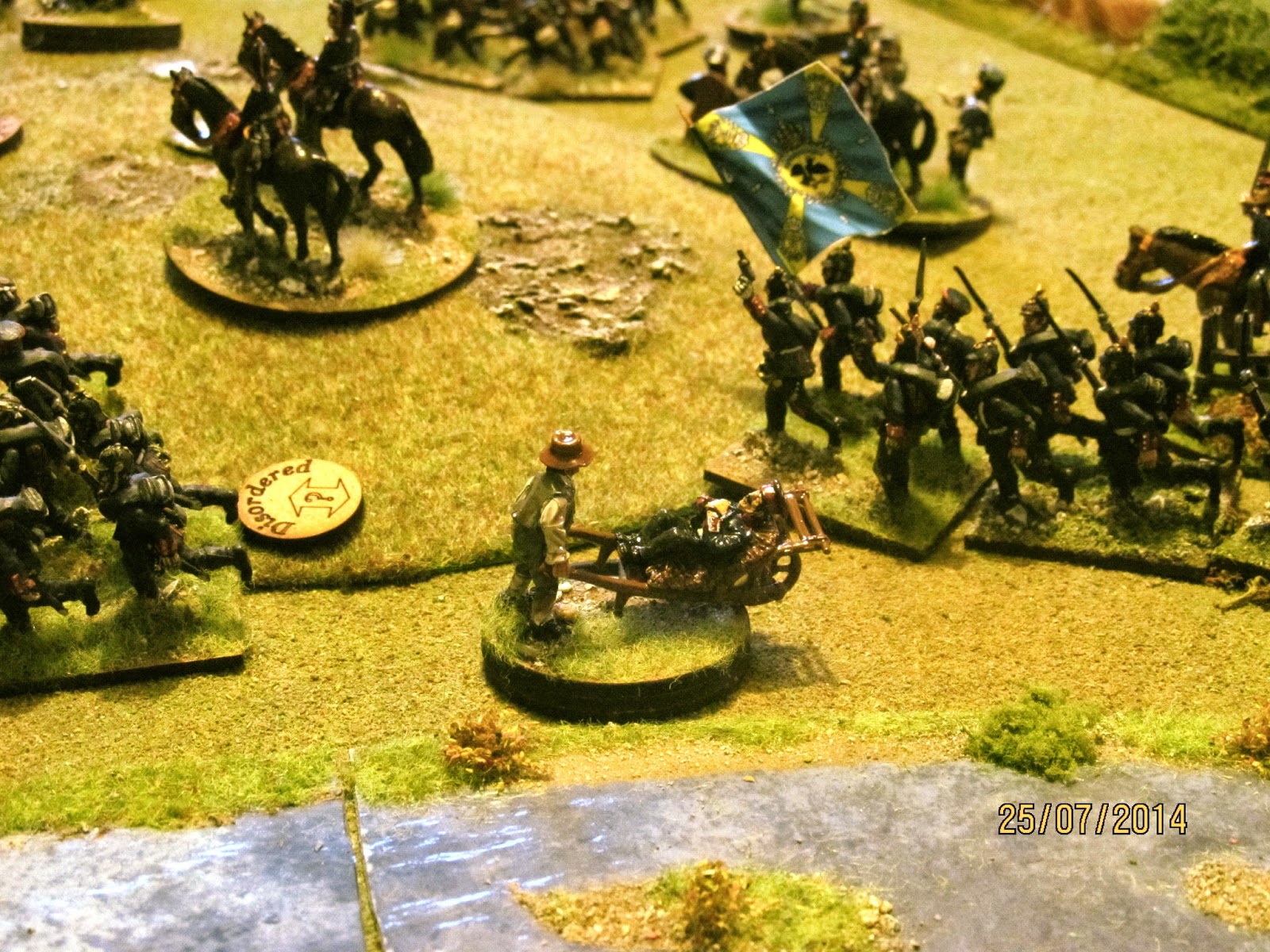 (Above, as the long shadows cast by the setting sun bring the day to a close, Prussian wounded being taken to the rear by wheelbarrow, while below the retreating French reach the village to find the bridge already blown). 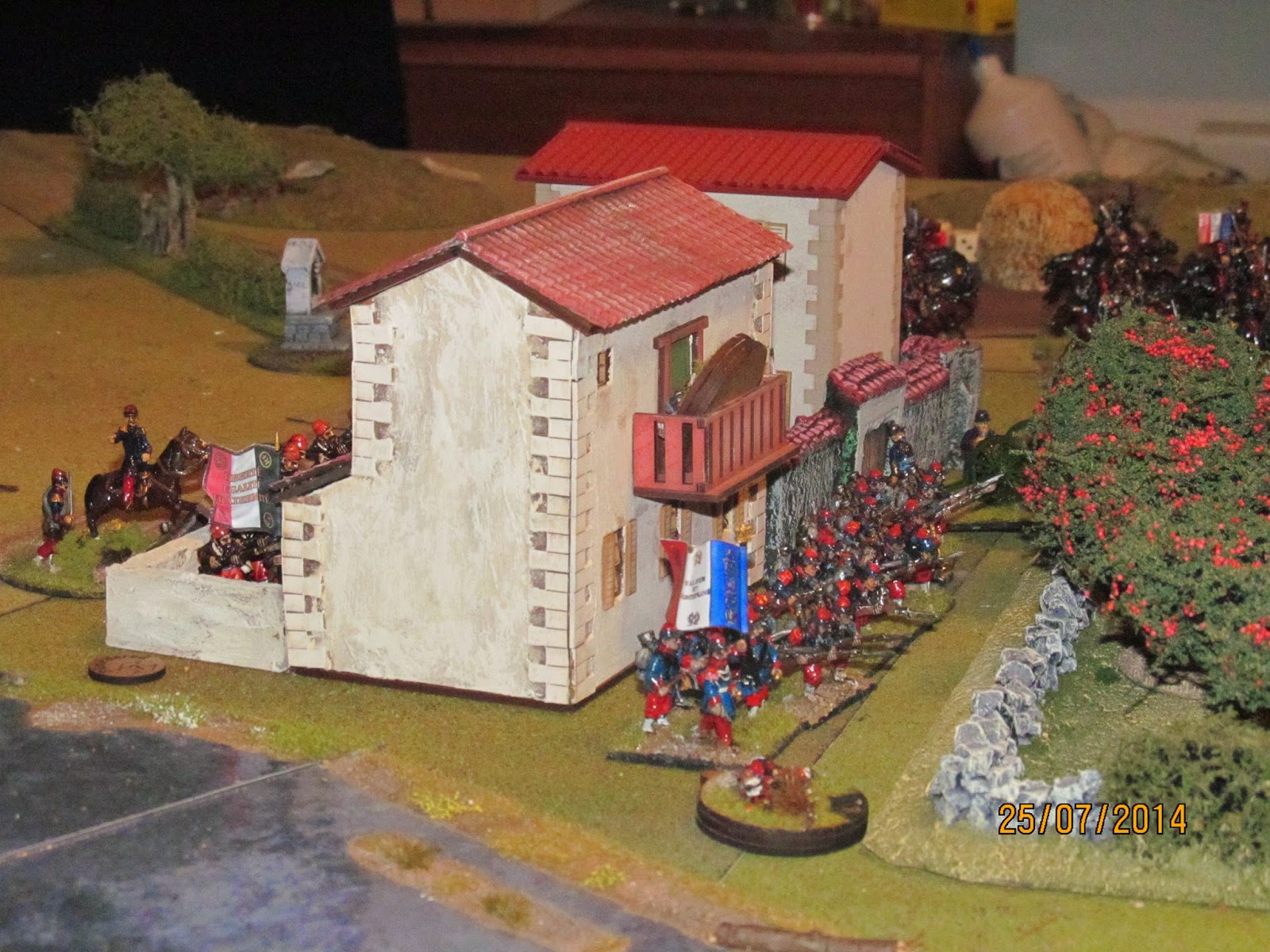 So honours were about even. We had each had a brigade broken. I had failed to prevent the demolition of the bridge but the majority of the French army were trapped on the south (i.e. wrong) side of the river. No doubt they would be able to extricate a few troops from the eastern edge of the table so a draw with both sides able to claim a moral victory. I enjoyed the game and I hope Clive did too and wasn't put off BP forever. A good day spent playing with my toys.

And so, to the fading and haunting sounds of violins and the clash and gentle tapping of tambourines, the battle ends...... 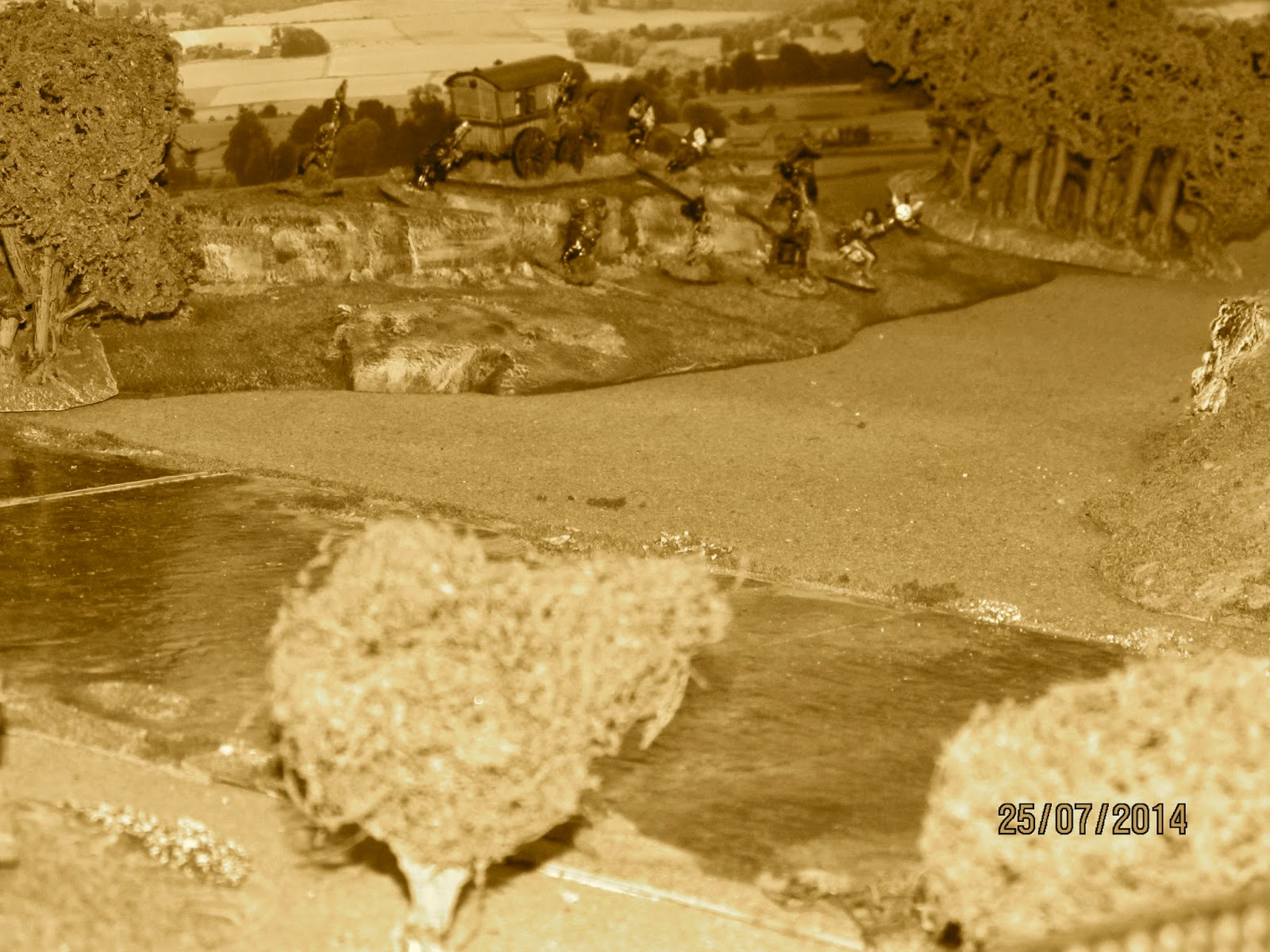 More photos can be found on Clive's own blog 'Vintage Wargaming'; I think the title has more to do with the age of the figures rather than of the players! Clive, we can try the promised Crimean game next time assuming I can find the British!
By Colin Ashton - June 26, 2014