John Mc came up last night for a game so I decided to set up a SYW game based on the popular Charles Grant scenario. The Prussians were tasked with crossing the river in sufficient strength to drive off the Russians, while the Russians' objective was simply to prevent the Prussians from gaining a decent foothold on the opposite river bank. Easy peasy! Not.

The Russians had one brigade on the table with two others due to arrive at some point during the evening from pre-designated entry points. The Prussians had three units already over the river. The rest would arrive on table and begin the task of getting across the river by using local boats etc. As we were using Black Powder I decided that it would take three 'turns' to cross; one to embark (from march column), one to cross the river and another to disembark and deploy. 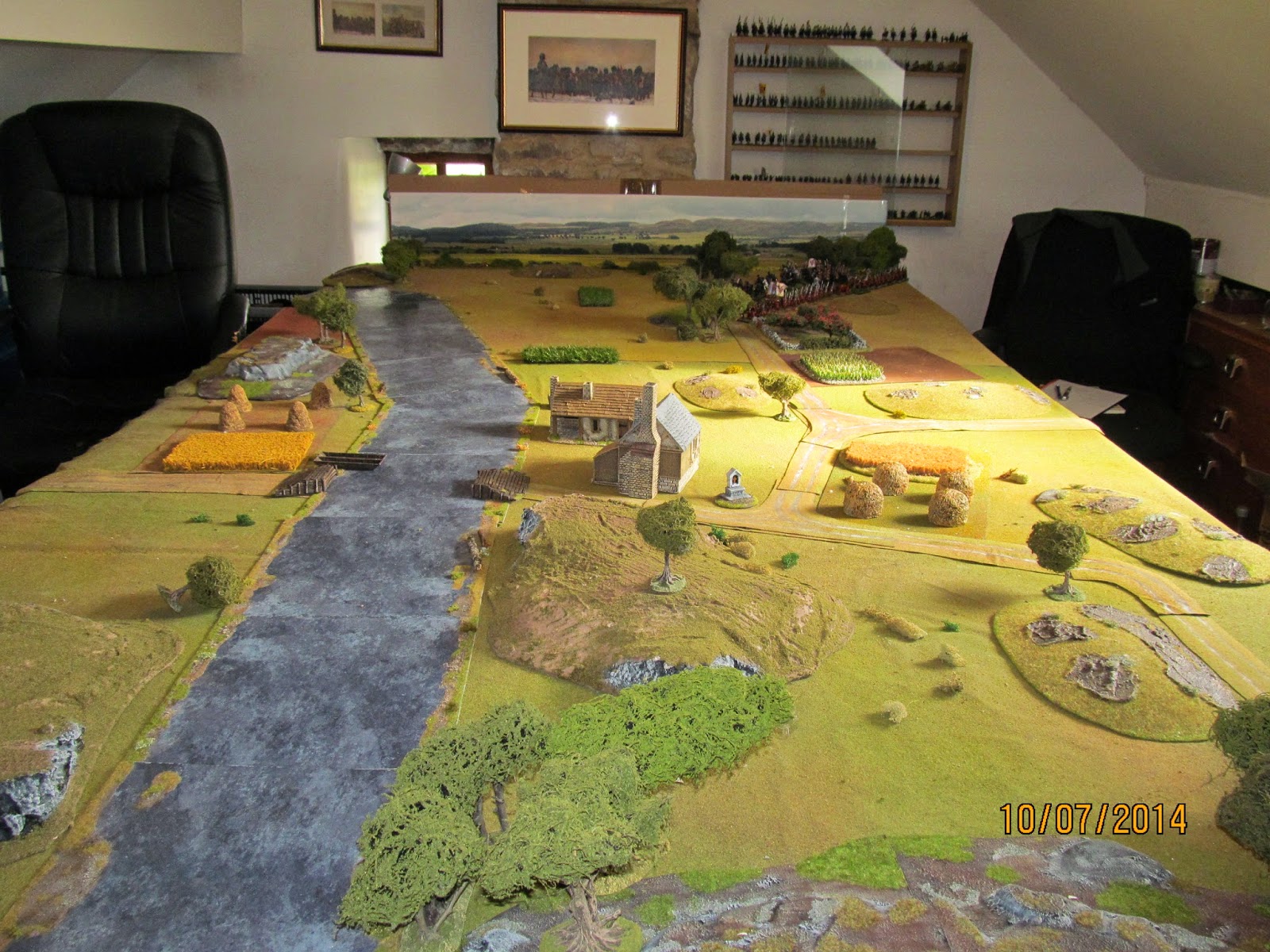 Unit sizes were: Infantry btns 36, light infantry 12, Hussars 12, Prussian Cuirassiers 30, Russian Horse grenadiers/Cuirassiers 24. Nice and big and cumbersome!!! I used the troop characteristics as outlined in Last Argument of Kings, slightly tinkered with, as well as a couple of 'house rules', most of which we forgot to apply!

We diced for sides and John got the Russians and the first move. I had two battalions  and the freikorps Croat light infantry holding the village. Not wanting to sacrifice firepower and mobility I decided not to occupy the buildings. The Croats deployed into the cornfield. I failed to get my remaining unit from this brigade across the river but the second brigade and the Cuirassiers gradually arrived on the riverbank.

The Russians were slow to deploy and engage the troops defending the village but my attempts to get more troops across the river were foiled by poor dice scores. I did eventually get another infantry battalion and my cuirassier brigade across, but not before the first lot of Russian reinforcements had arrived.  There was now a nice ring of Russians surrounding the beleaguered Prussian troops. 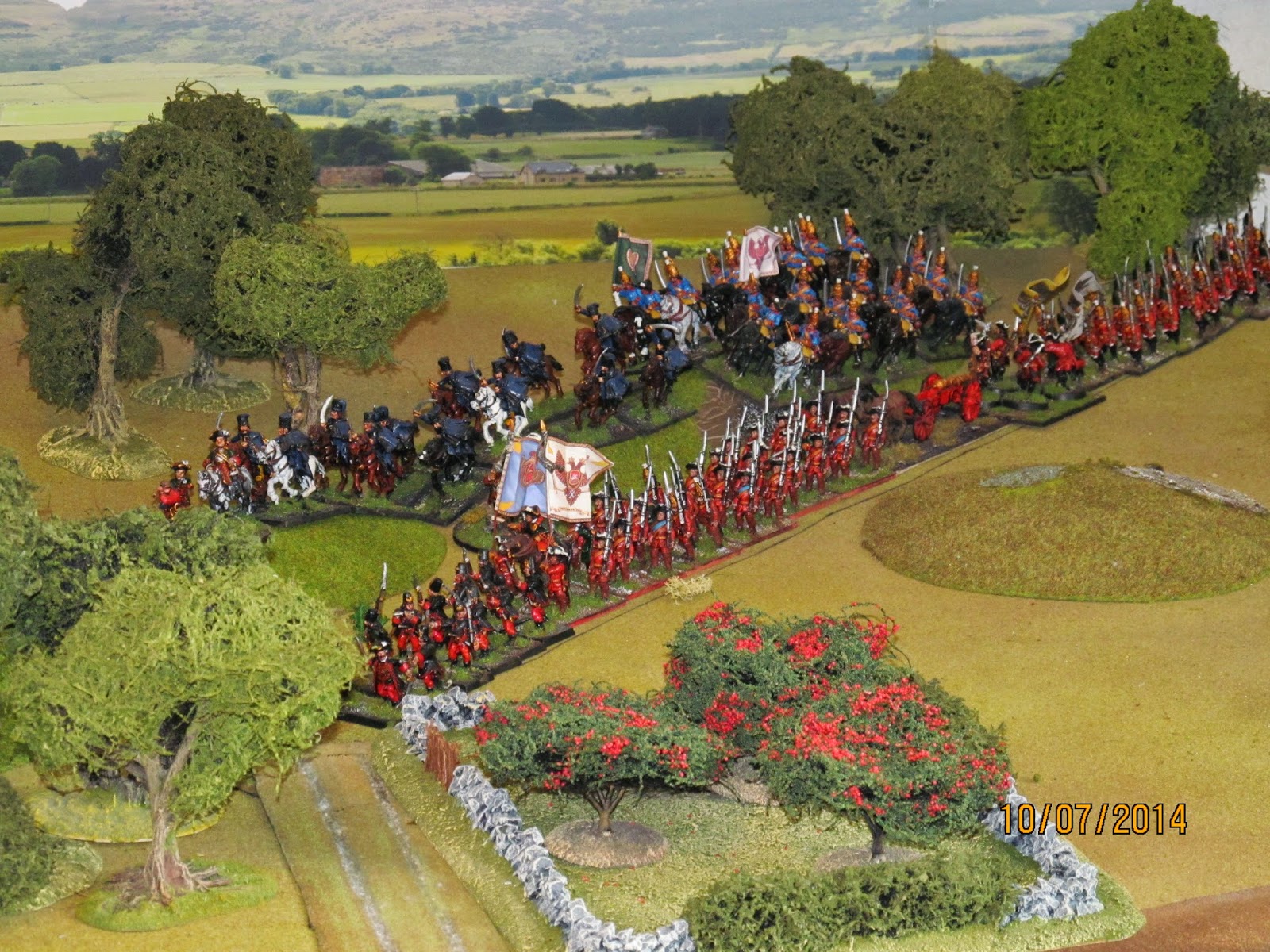 (Above and below, the Russians advance towards the Prussian bridgehead) 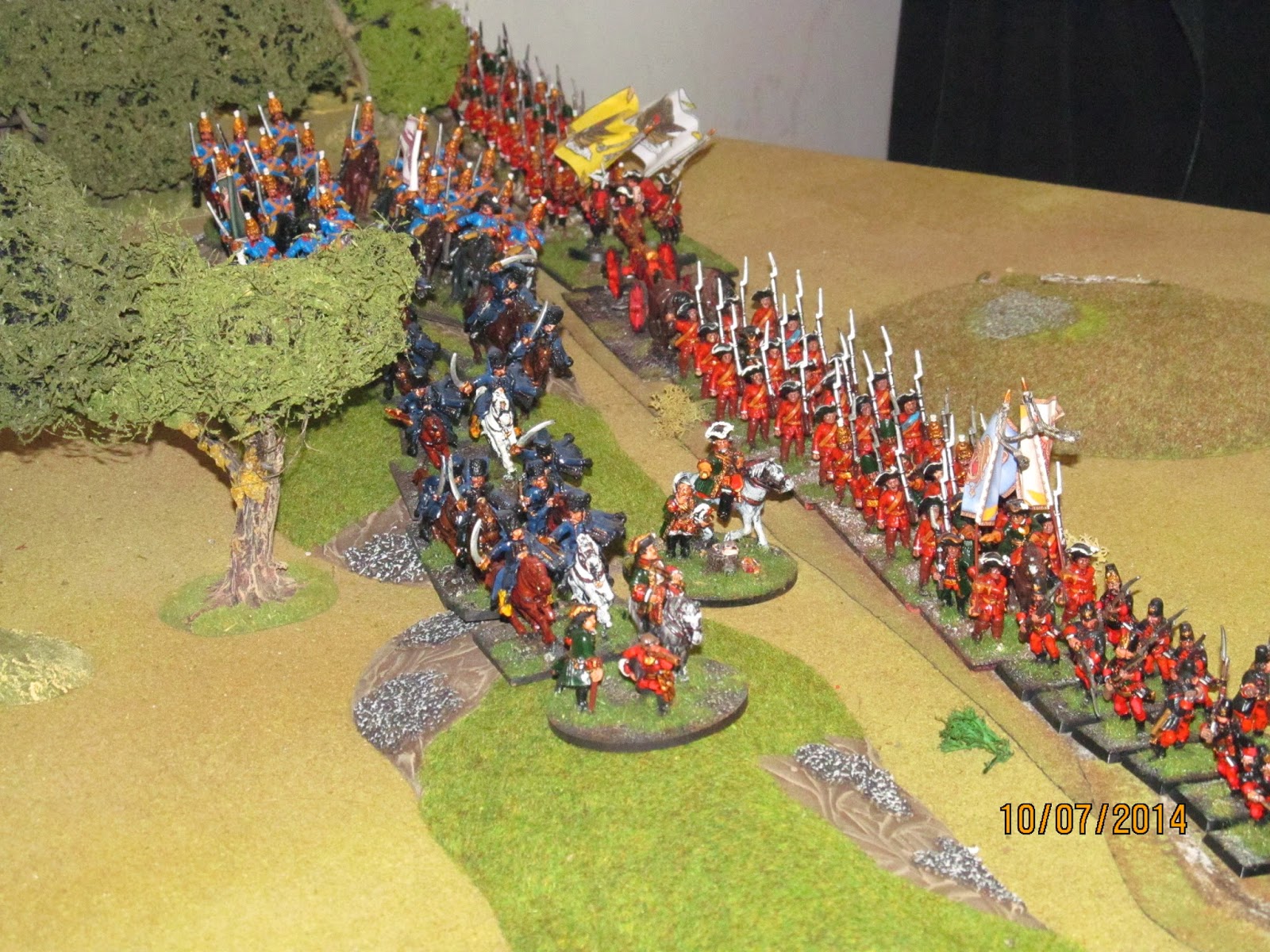 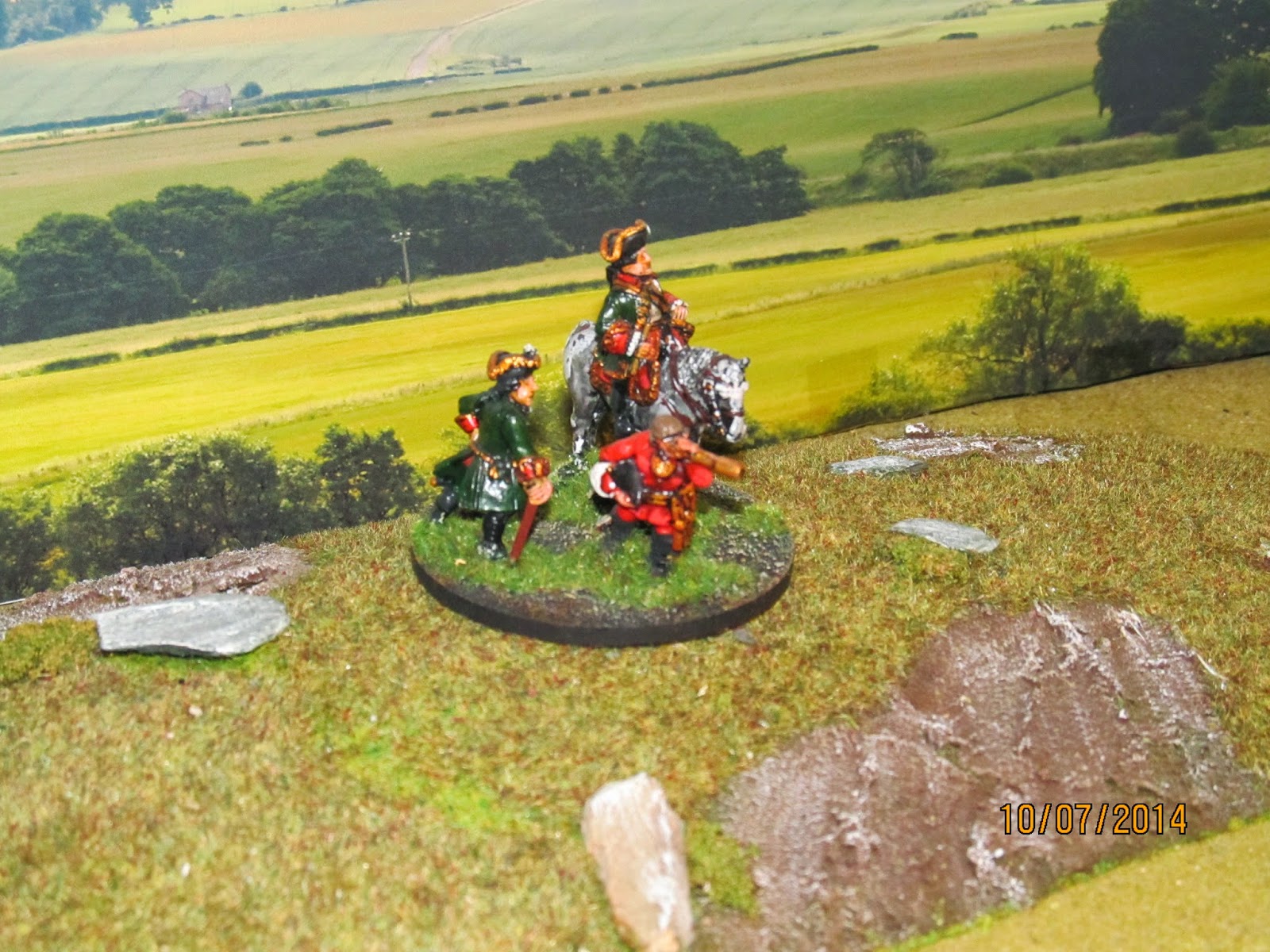 (Above: The Russian CinC looks on from afar - OMG a telegraph pole in the distance!!!; as below, the Prussians await their turn to cross the river) 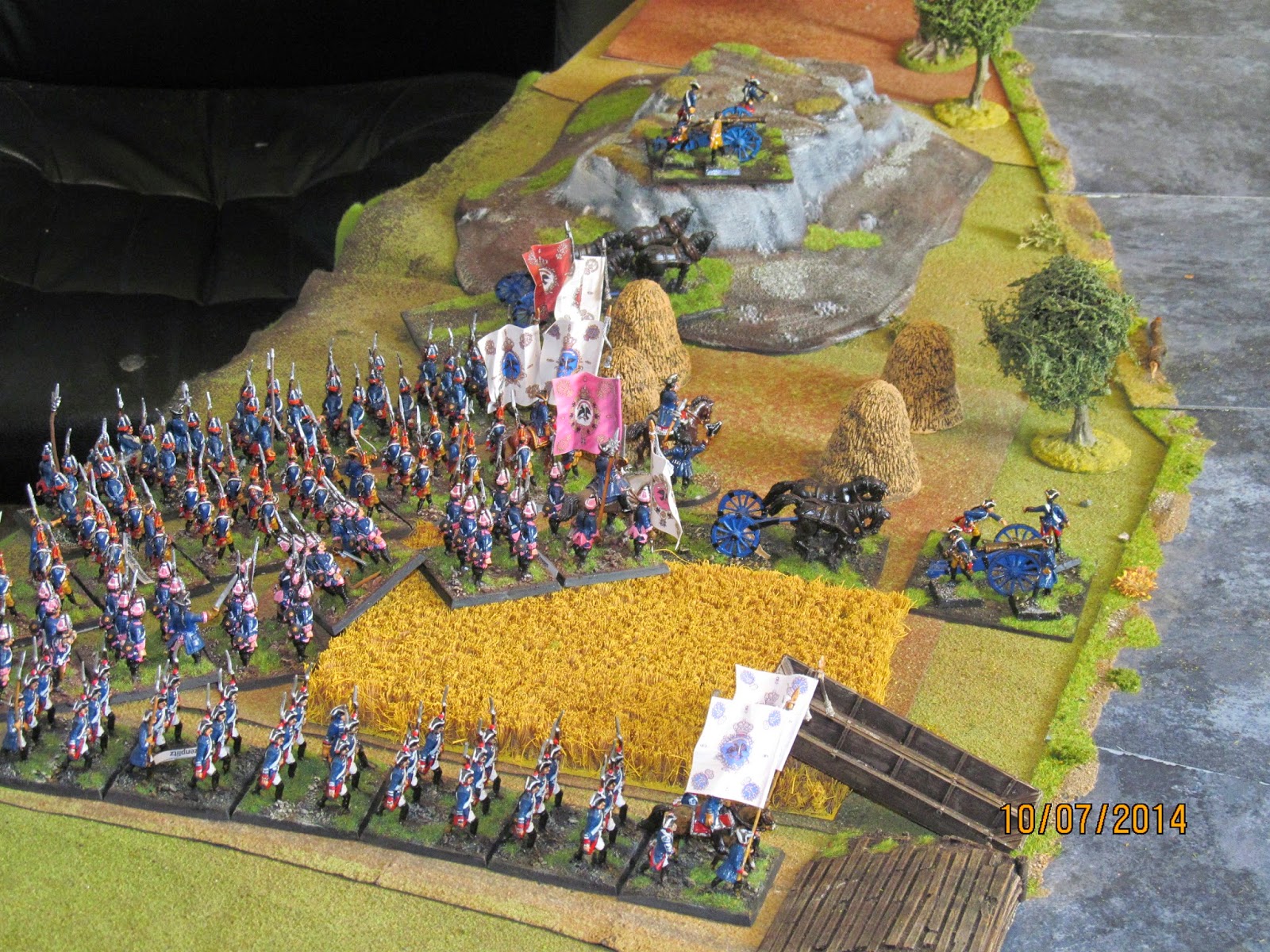 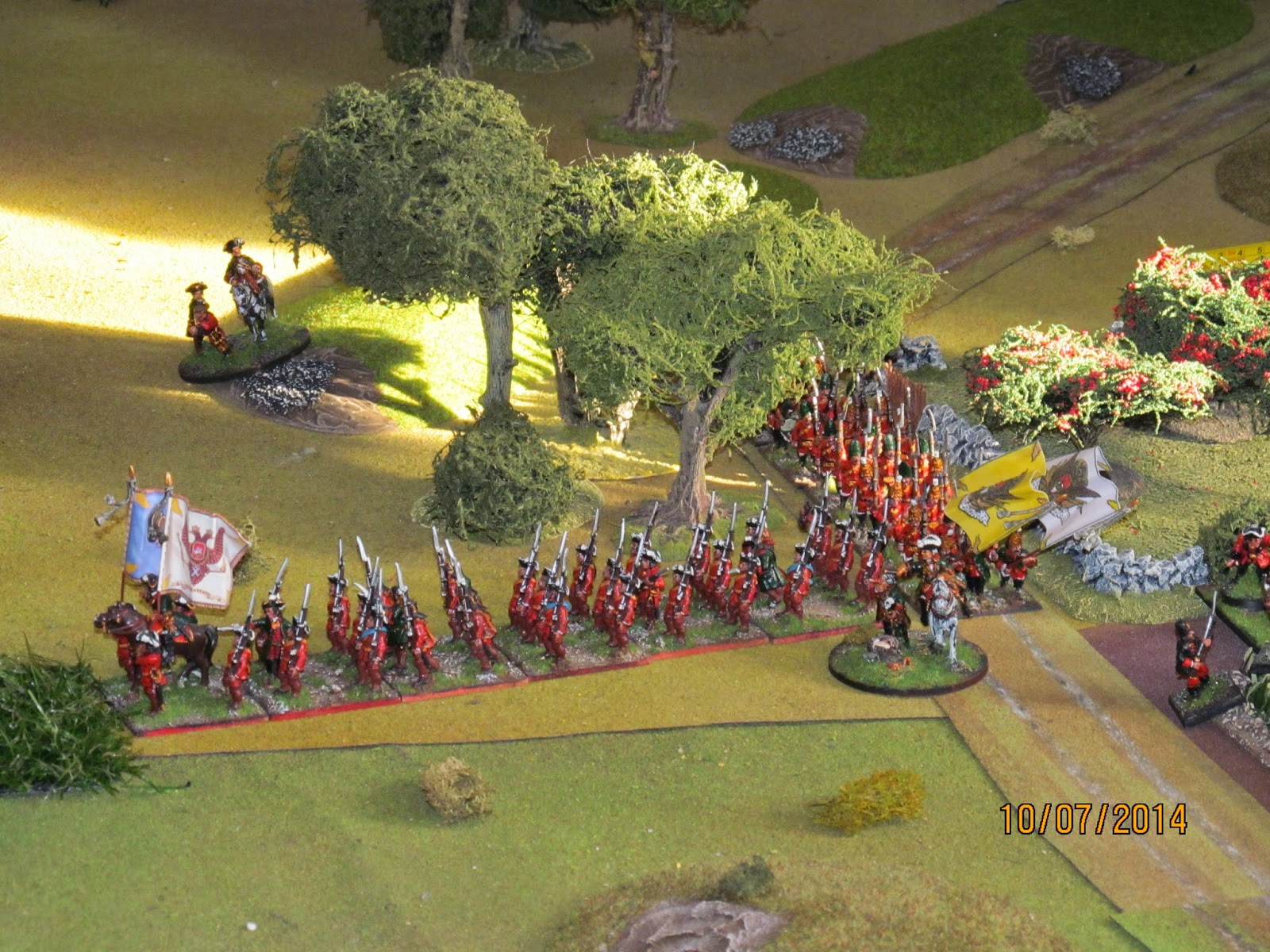 (Above, the Russians STILL advancing, very slowly, towards the Prussian in the village and below, finally start to deploy) 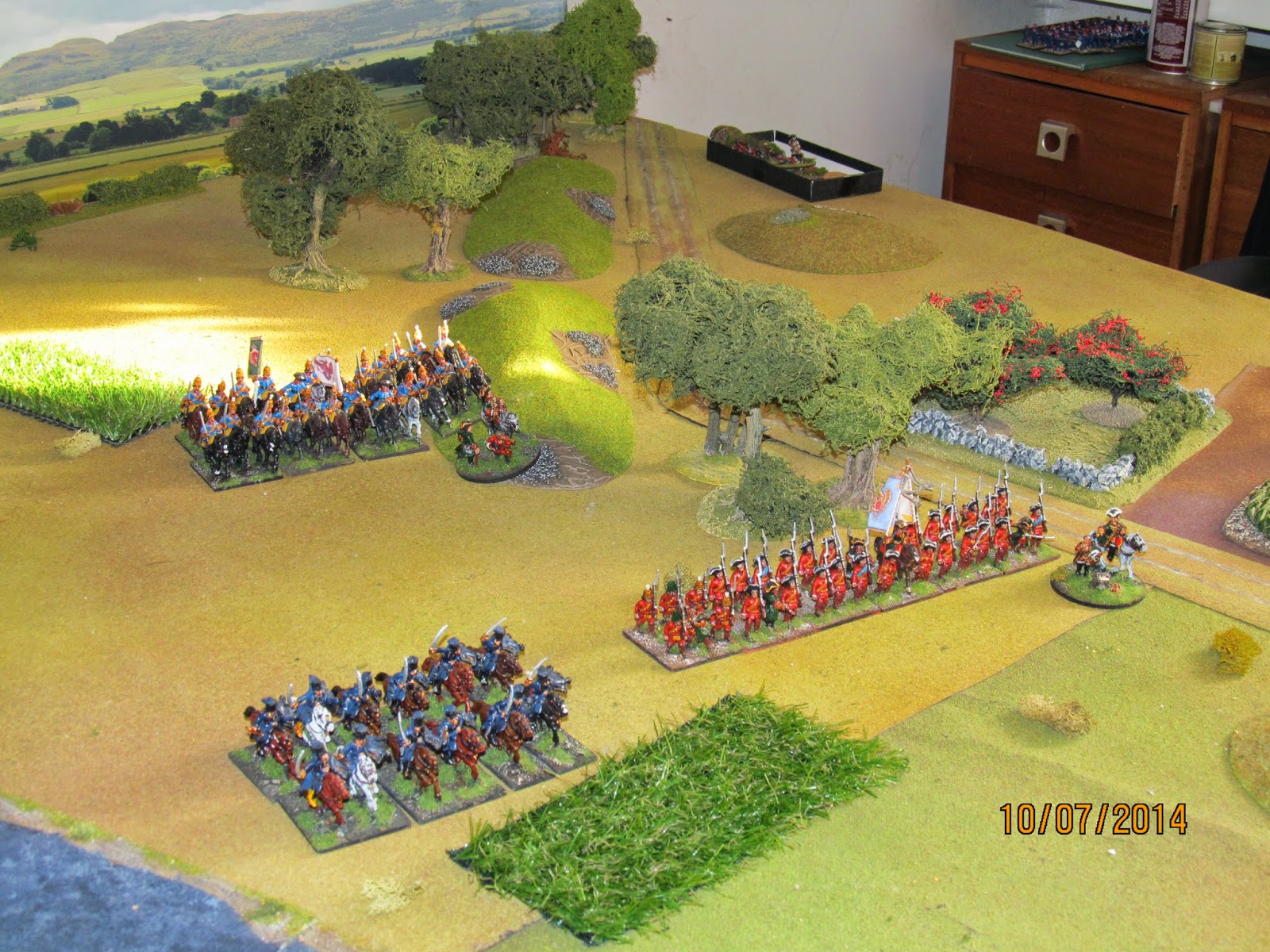 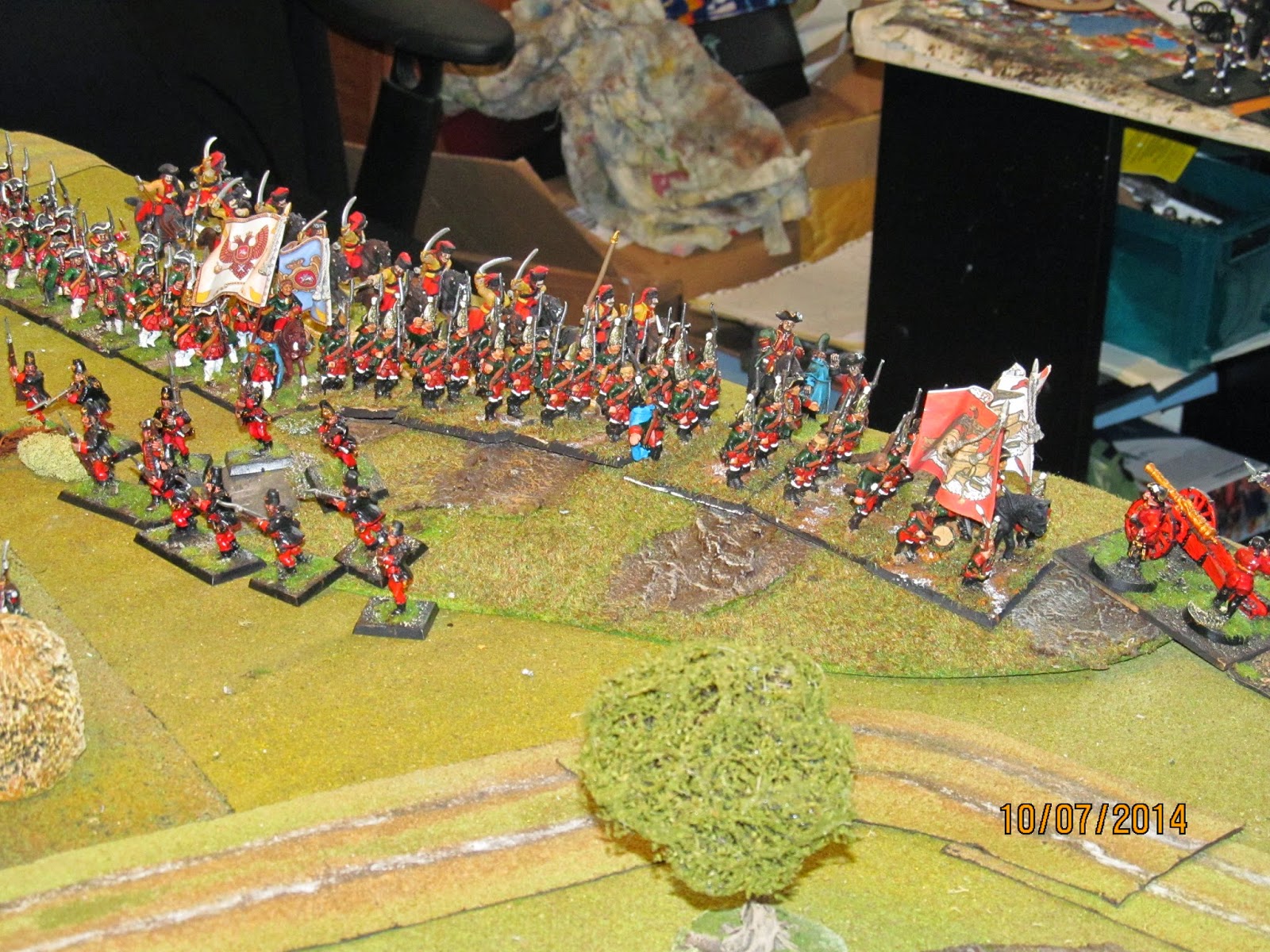 (Above, the first of the Russian reinforcements while below the Prussian battalion on their right delivering its utterly forgetful and hopelessly ineffective volley!) 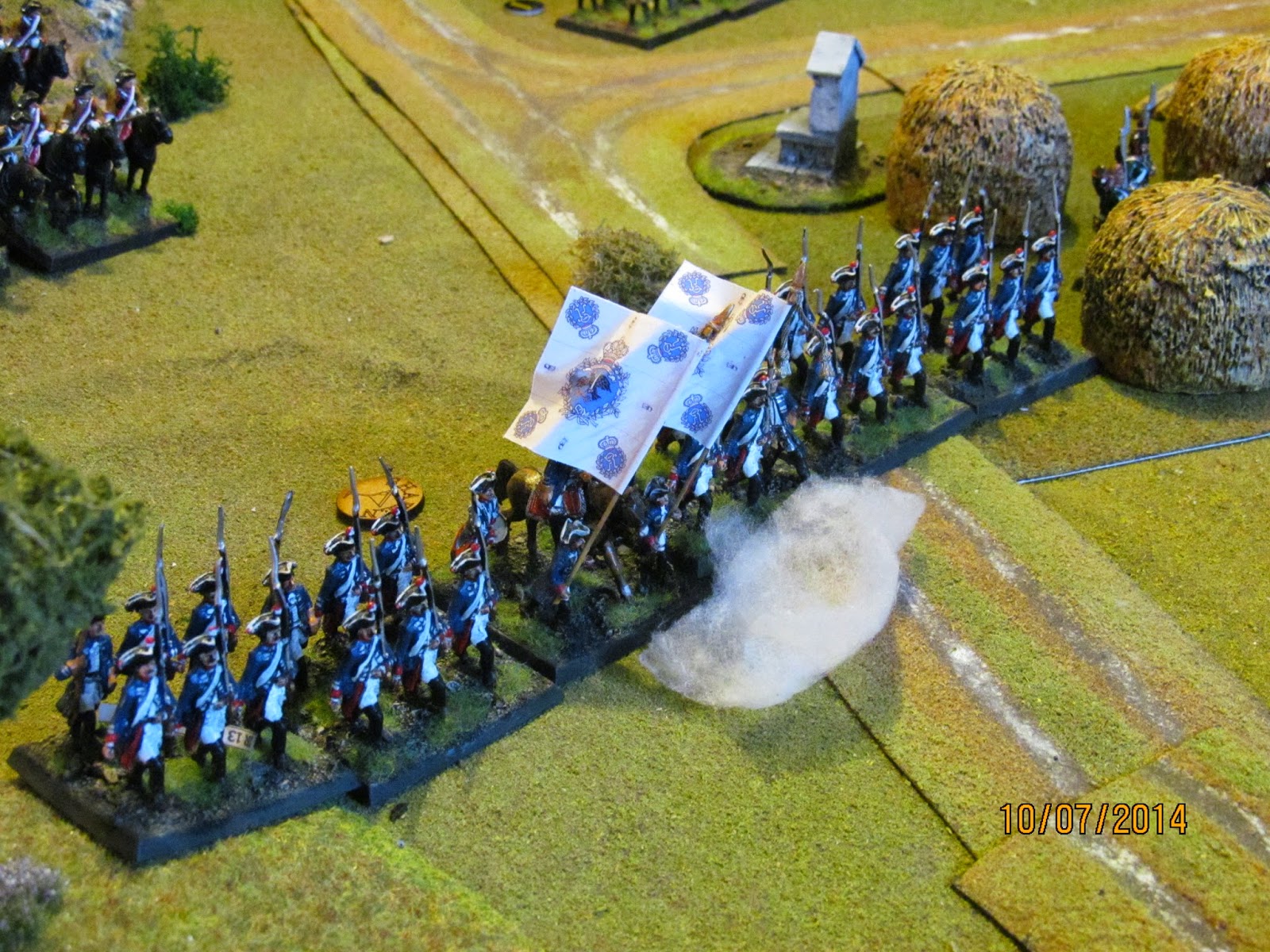 Had I been the Russians I might have been more aggressive, but my aggression was to prove my undoing almost at once. My right flank infantry battalion boldly advanced to within range of the Russians and let go with their first volley, and only scored 1 hit which was promptly saved! Grrrr. Next turn the return fire from the undamaged Russians supported by a gun resulted in my unit becoming shaken and after taking the break test for excess casualties it simply ran away!  On my left the infantry there had advanced in the same manner as their now dead and fleeing compatriots and had halted the Russian advance in their tracks! The Russian infantry there were eventually broken thanks to a combination of close-range musketry and artillery fire from over the river.

In the centre the Prussian Croats were skirmishing with the Russian Croats (Pandours). The latter were not very enthusiastic, even less so than mine, and one unit broke. The Russian hussars spent the battle trying to find a safe place from which to harry my flanks or drive off the Croats but never quite managed to get into either. Wise hussars. I have a 'house rule' that doesn't allow Russian Hussars to charge heavier cavalry so their use on the battlefield was limited.

Another unit of Prussians was being ferried over the river but with one battalion destroyed and another disordered and exposed to lots of Russian artillery and musketry I needed to buy some time. I launched my Prussian panzerkorps.......er, ok my Cuirassiers against the unbroken Russian line. The first regiment didn't reach as it ran out of steam due to a poor command score. The second thundered into the Russian Grenadier battalion that had seen off my infantry earlier in the battle. Closing fire hurt but didn't stop the Prussians  but in the melee the honours went to the Russians. I lost the melee and threw 3 on 2D6 and promptly broke. The supporting regiment held but was then shaken by enemy fire and had to withdraw. That saw the end of the Prussian Cuirassier brigade and my aggressive phase! 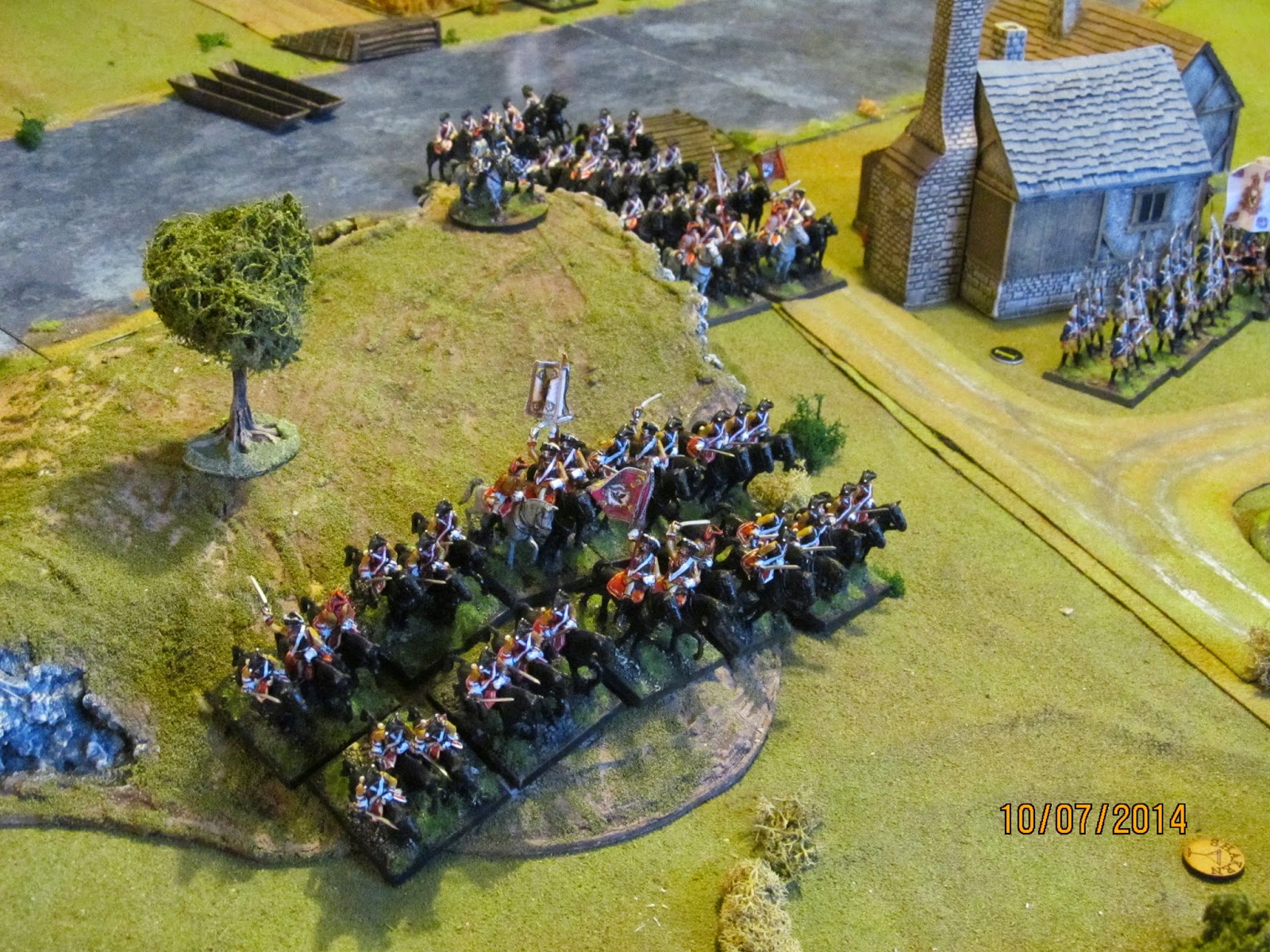 (Above, the Prussian Cuirassiers forming up and below, their fateful charge!) 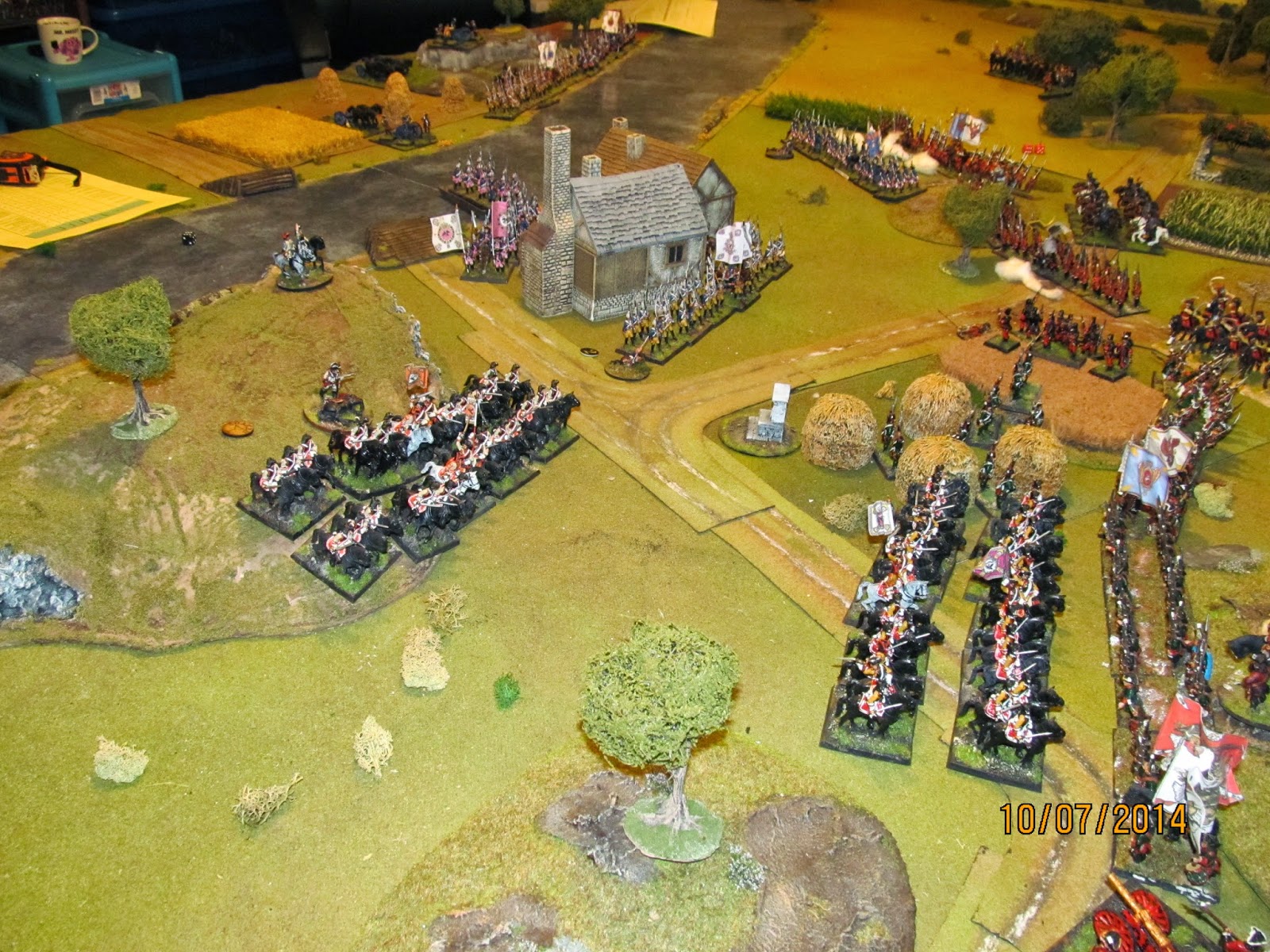 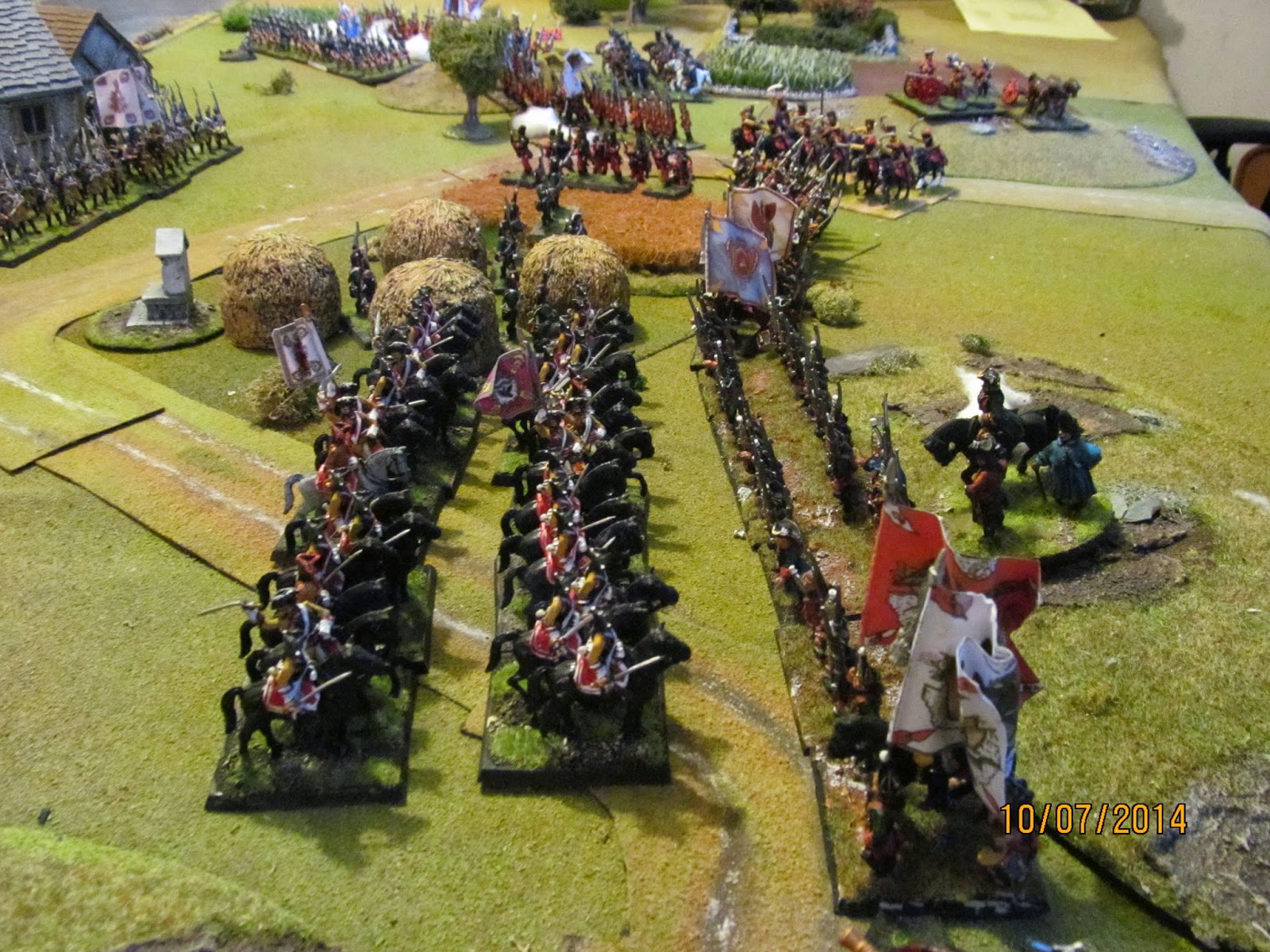 (Above: The Prussians charge home but are swiftly and bloodily repulsed. Below: a panorama of the battlefield 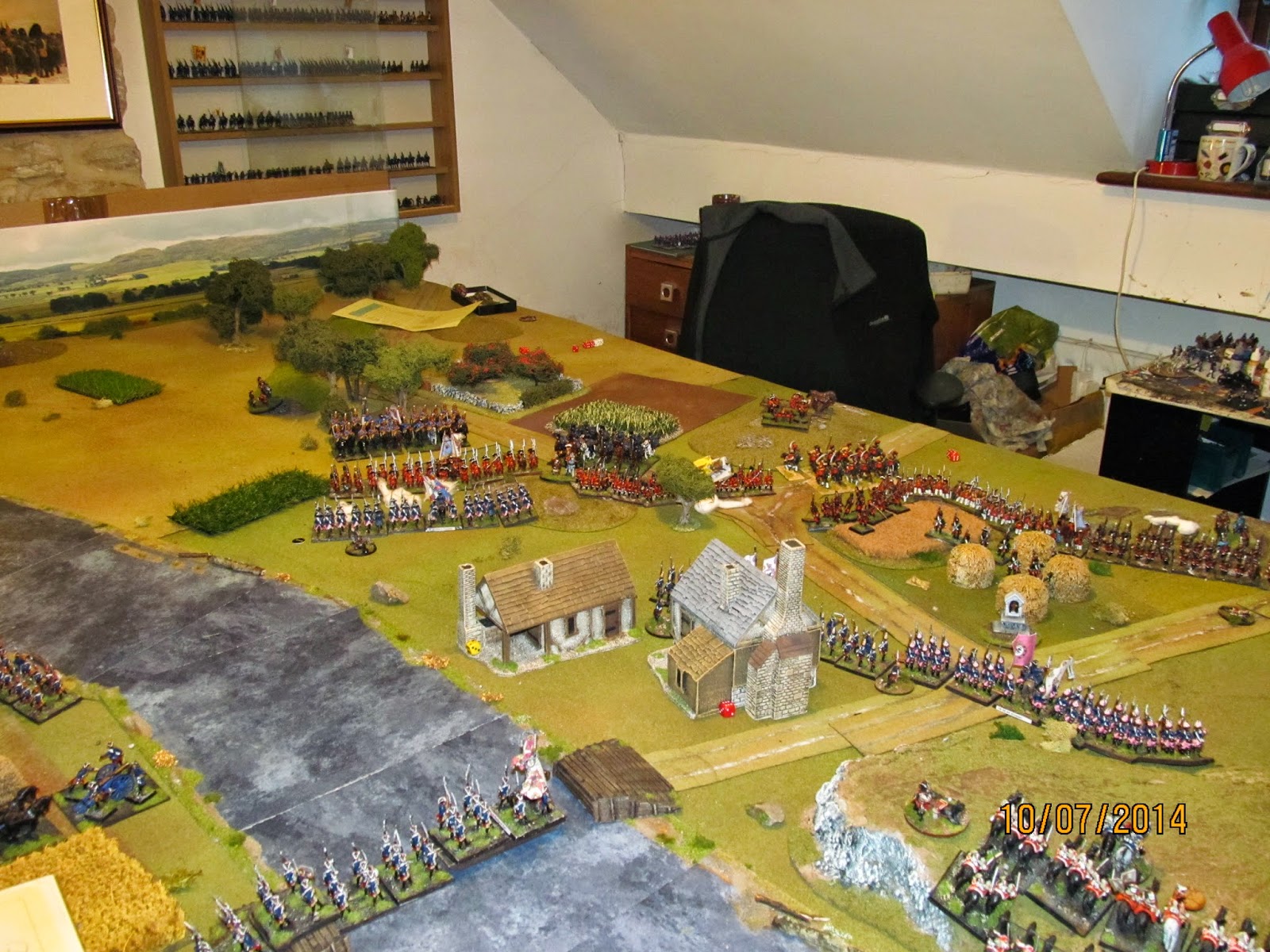 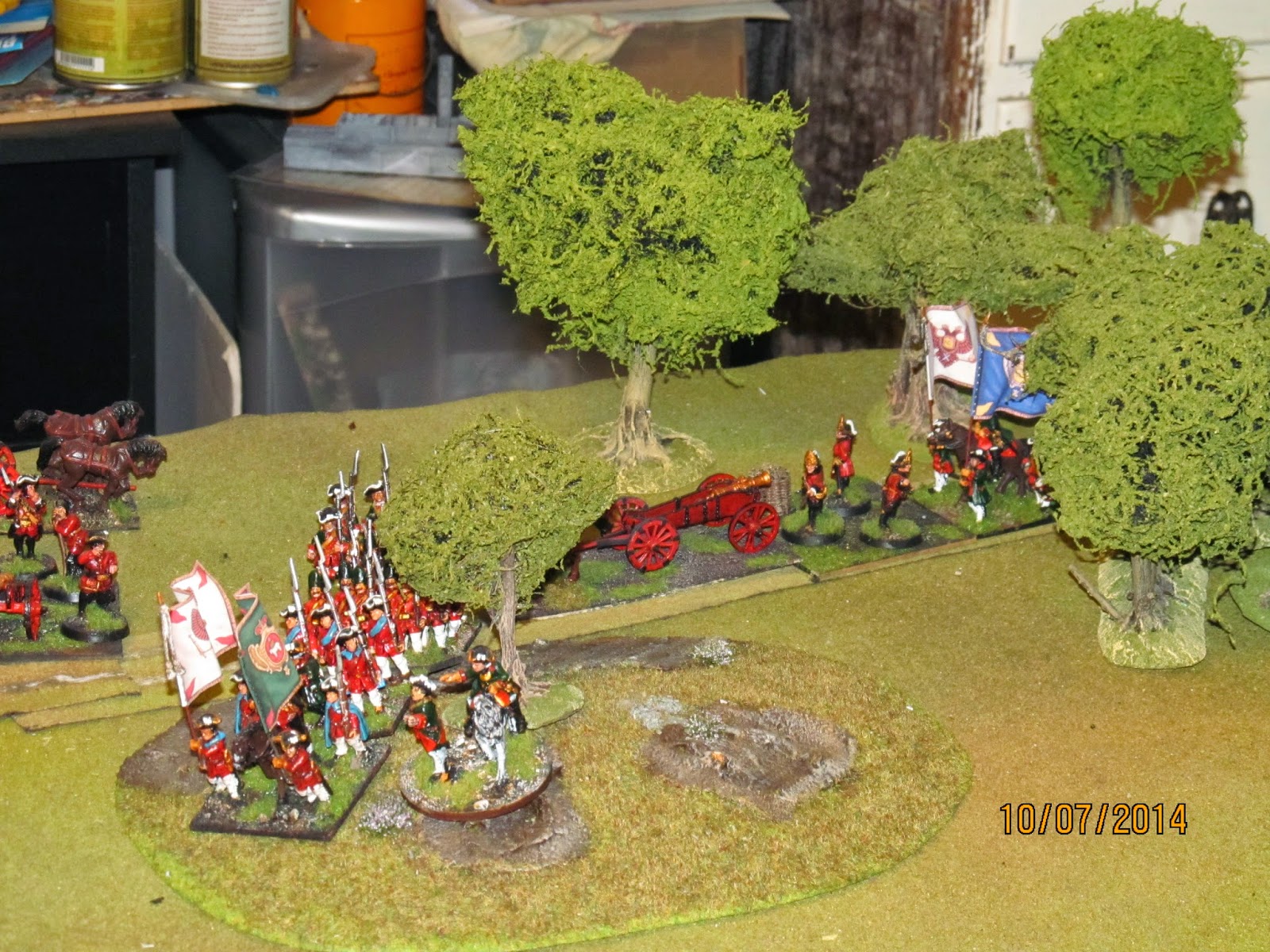 (Above, the last brigade of Russian reinforcements arrive while below, the Russian Horse Grenadiers crash into the Prussian IR Prinz von Preussen) 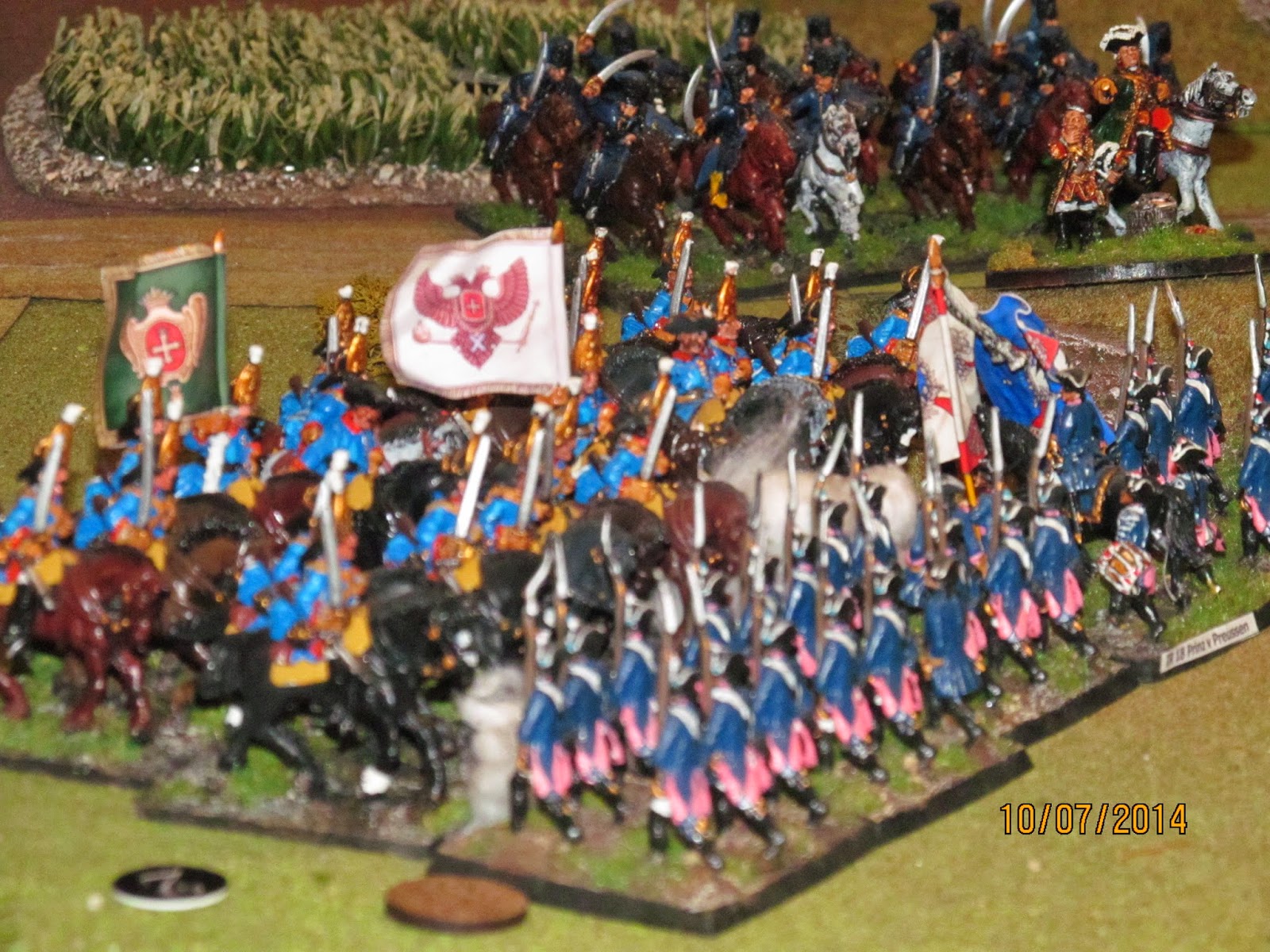 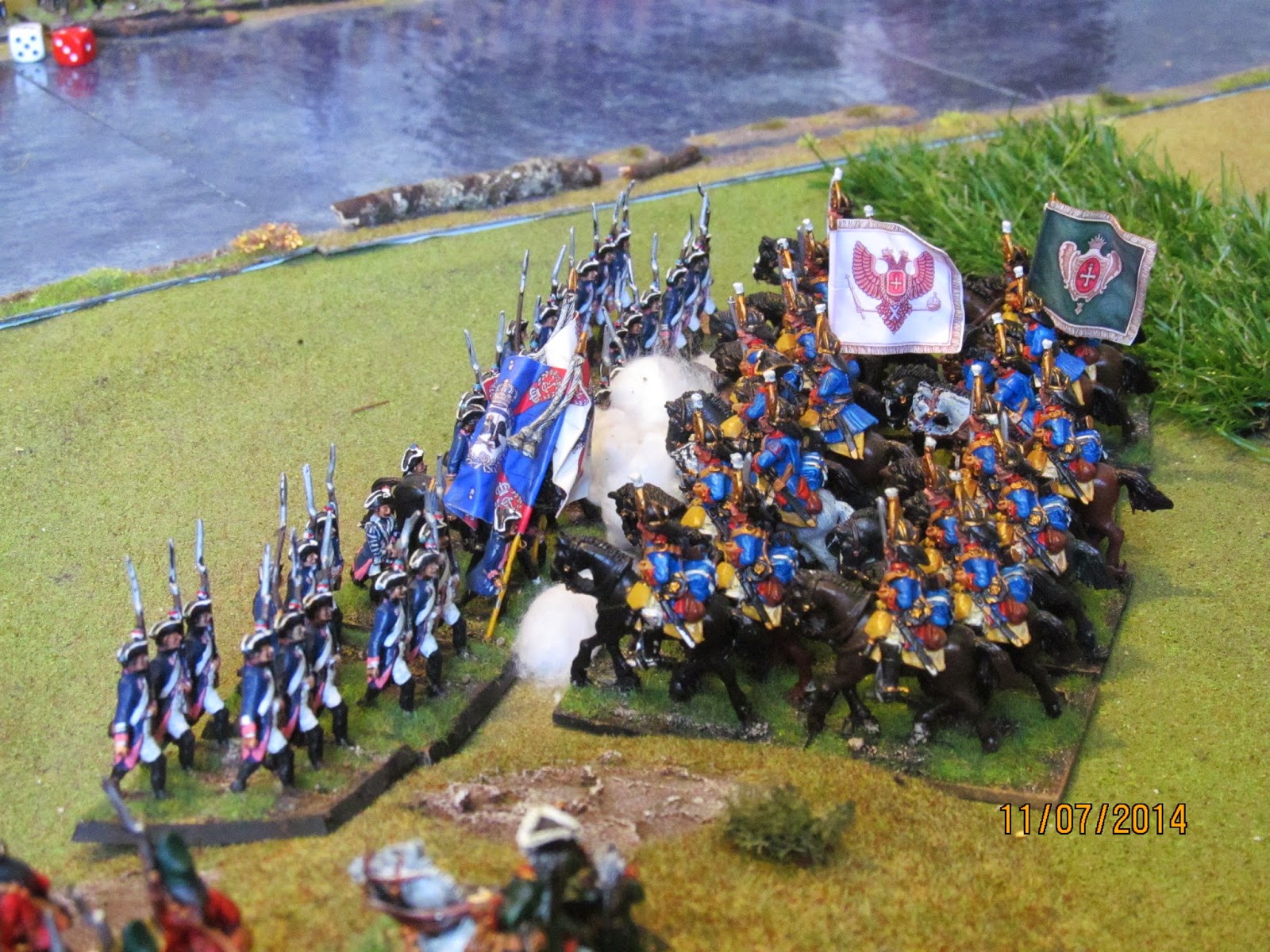 A few shots of the collection: 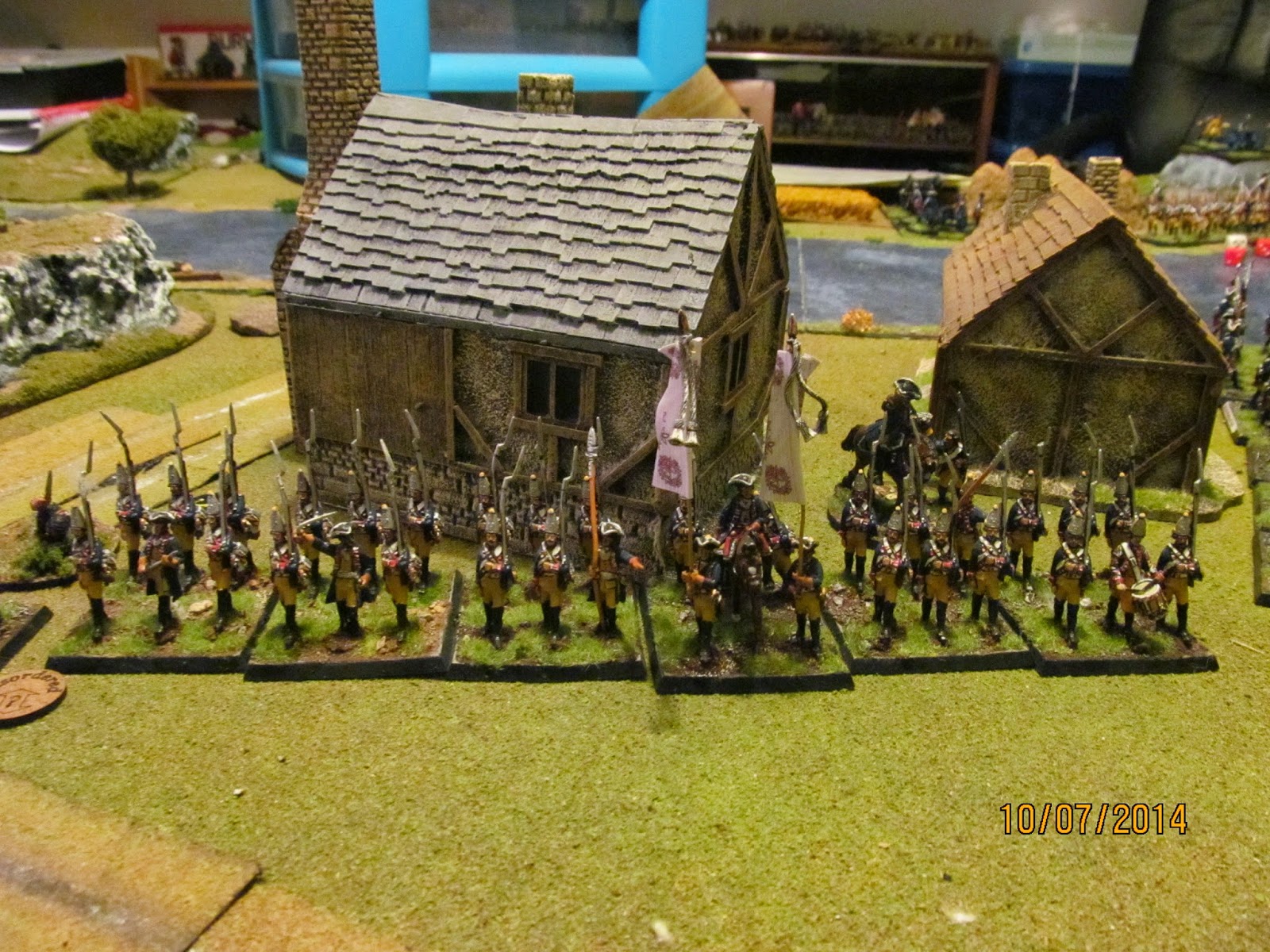 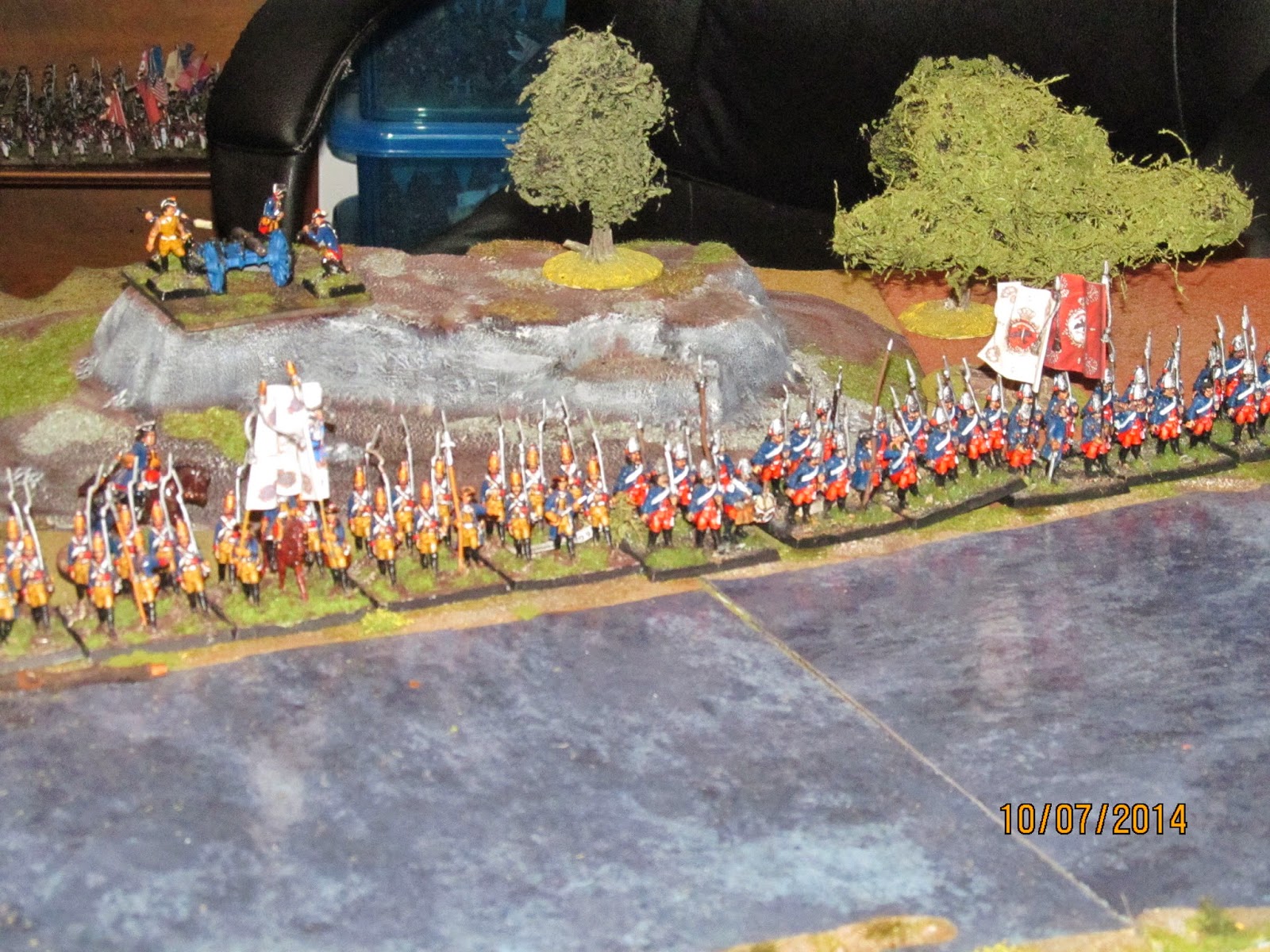 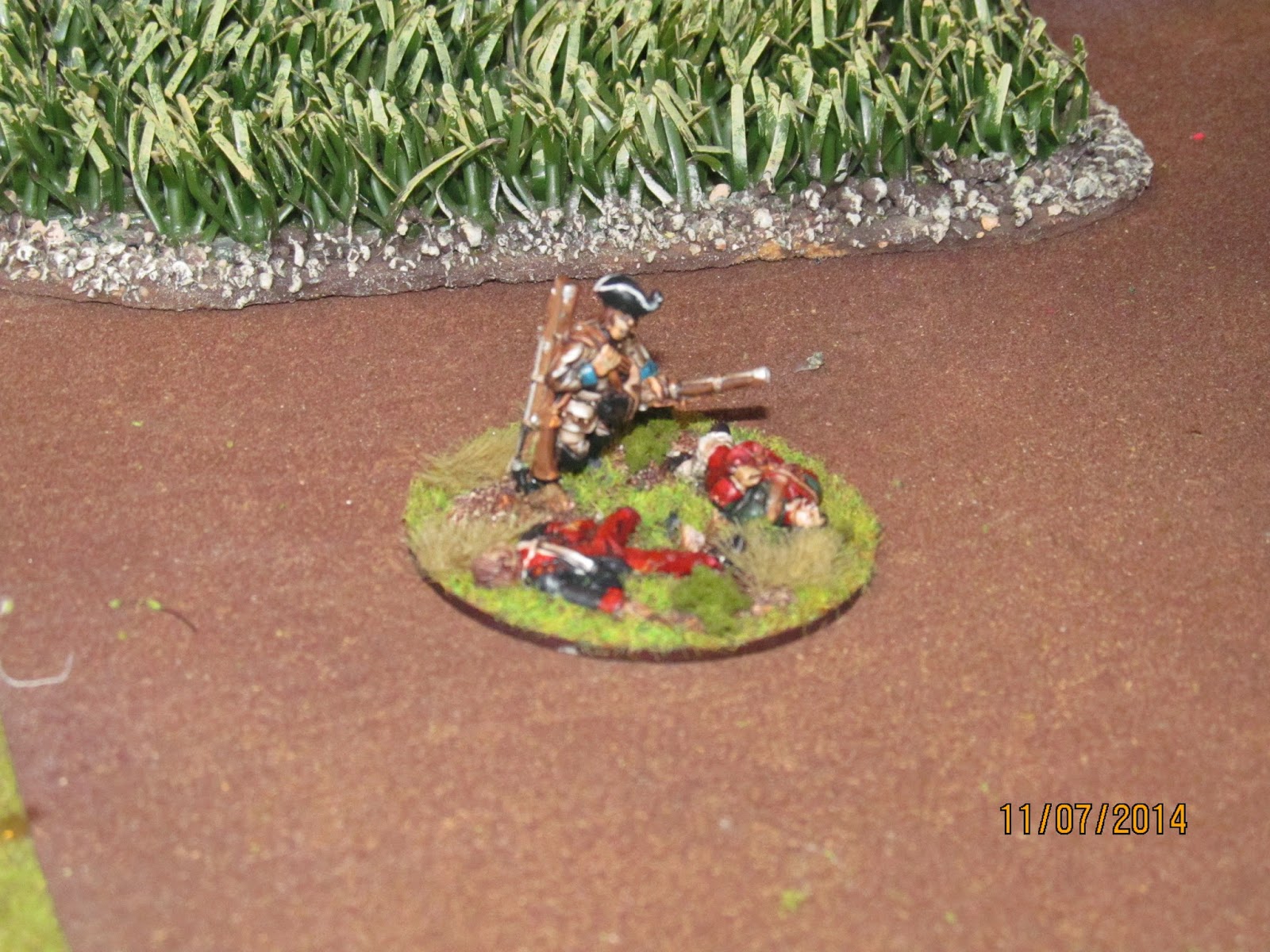 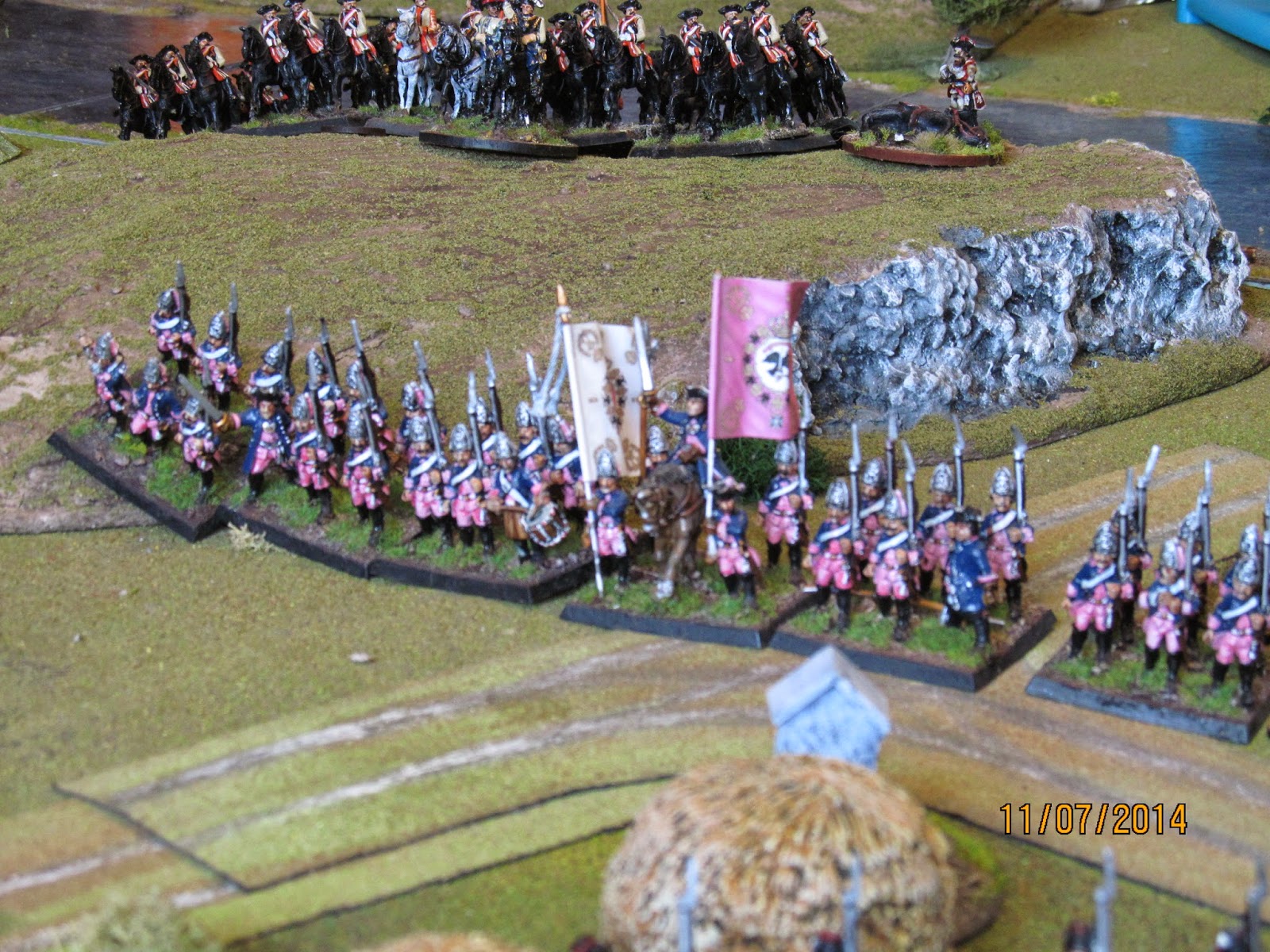 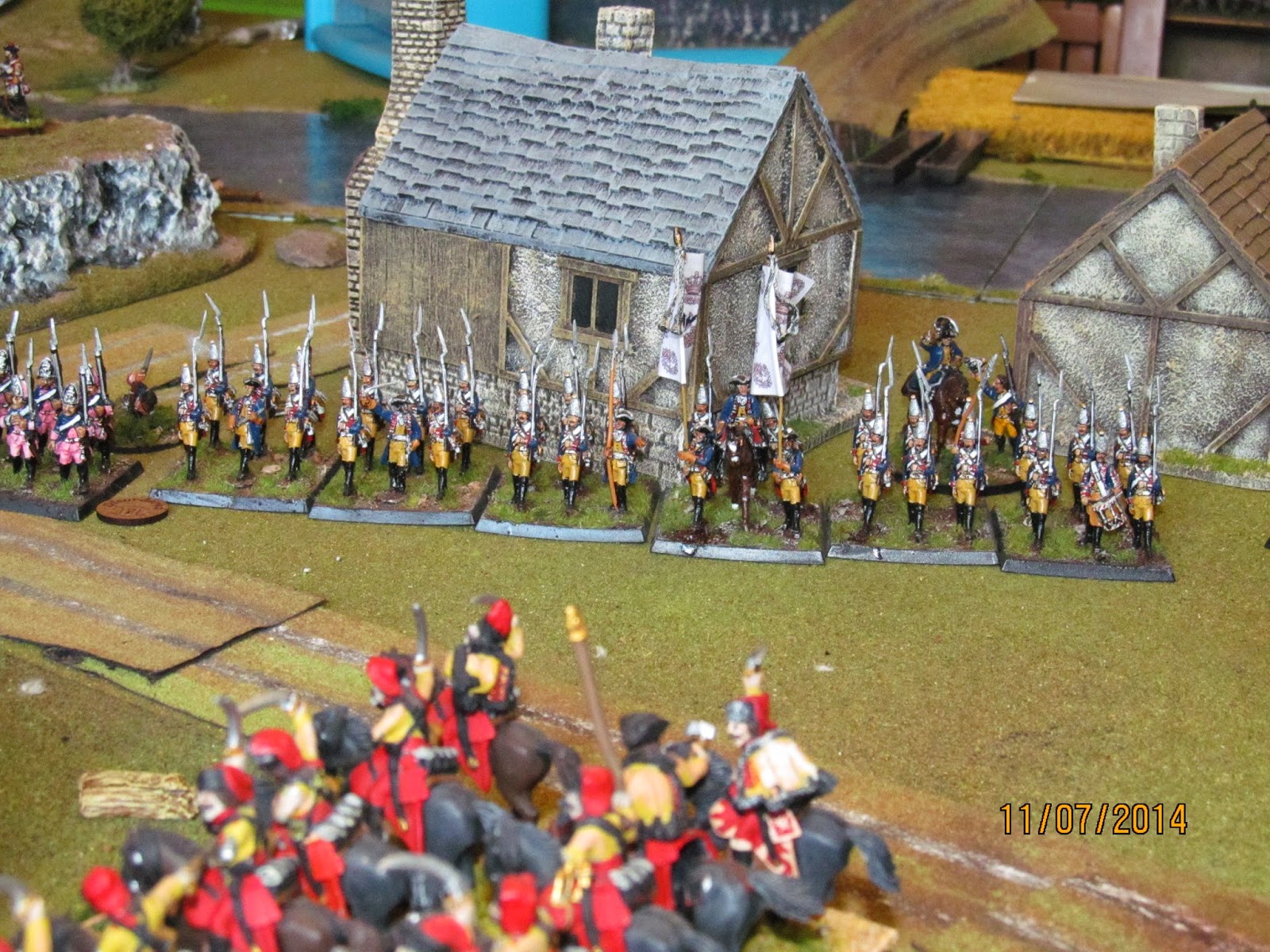 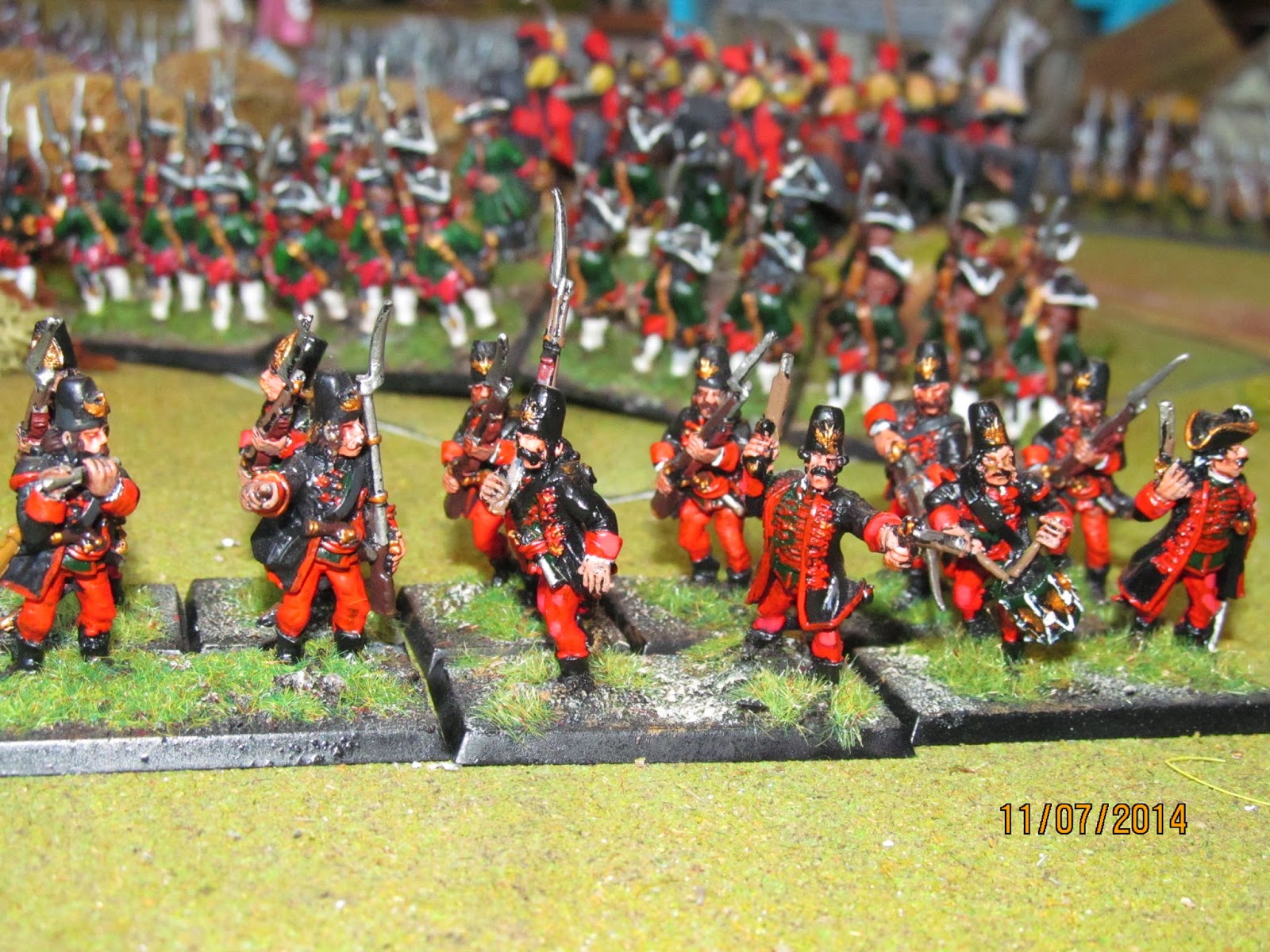 More Russians now appeared on the Prussian right but moved very slowly (thankfully). I had managed to get another unit over the river to support my left flank and another to fill the gap left by the Cuirassiers. In the final move the Russian Horse Grenadiers charged the Prussian left-hand infantry battalion which had already been softened up in their earlier fire-fight with the Russian infantry. The Horse Grenadiers survived the closing fire (!!!!), crunched into them and swept them away. In the sweeping advance phase the Russian horsemen smashed into the supporting unit, who were forced to retire.

At this point we called it a night. I had lost two brigades broken and my last brigade was struggling to get across the river so conceded defeat. John very graciously declared it a draw as he had failed o throw me back over the river but without reinforcements the Prussian tenure of the Russian side of the river was going to be a short one.

A good game with some very difficult tactical problems for both sides.

Paul's coming up next week so I'm looking forward to that immensely. Not sure what to play yet but plenty of time and choice.
By Colin Ashton - June 10, 2014