AWI Two for the price of one: How I lost the same game twice in a week, Part II

On Wednesday Rob was here so I decided to replay Monday's game, with a few amendments to the armies and the objectives. As well as minor changes to the British force the Americans now had the additional objective of getting a supply train from the right flank off the table on their left, thus having to traverse the entire width of the table. We threw for sides and Rob got the Americans. As I'd been the Americans I was quite happy, especially as I had a cunning plan to defeat them based on what happened when I commanded them earlier in the week. Big mistake #1. Big mistake #2 was forgetting that the British combined Grenadier and light infantry battalions were supposed to be classed as 'large', giving them an extra D6 in shooting and combat as well as, more importantly, an additional stamina point.

The game began with a very slow entrance onto the table by by lovely Hinchliffe Hessians, accompanied now by the newly-based and painted Fusilier Regiment von Knyphausen. Together with IR Prinz Karl. The rest of the brigade of the Leib IR and IR von Mirbach, supported by a battery of 6pdrs, barely made it onto  the table before the end of the game due to really poor command rolls. They must have taken a wrong turn or something........ 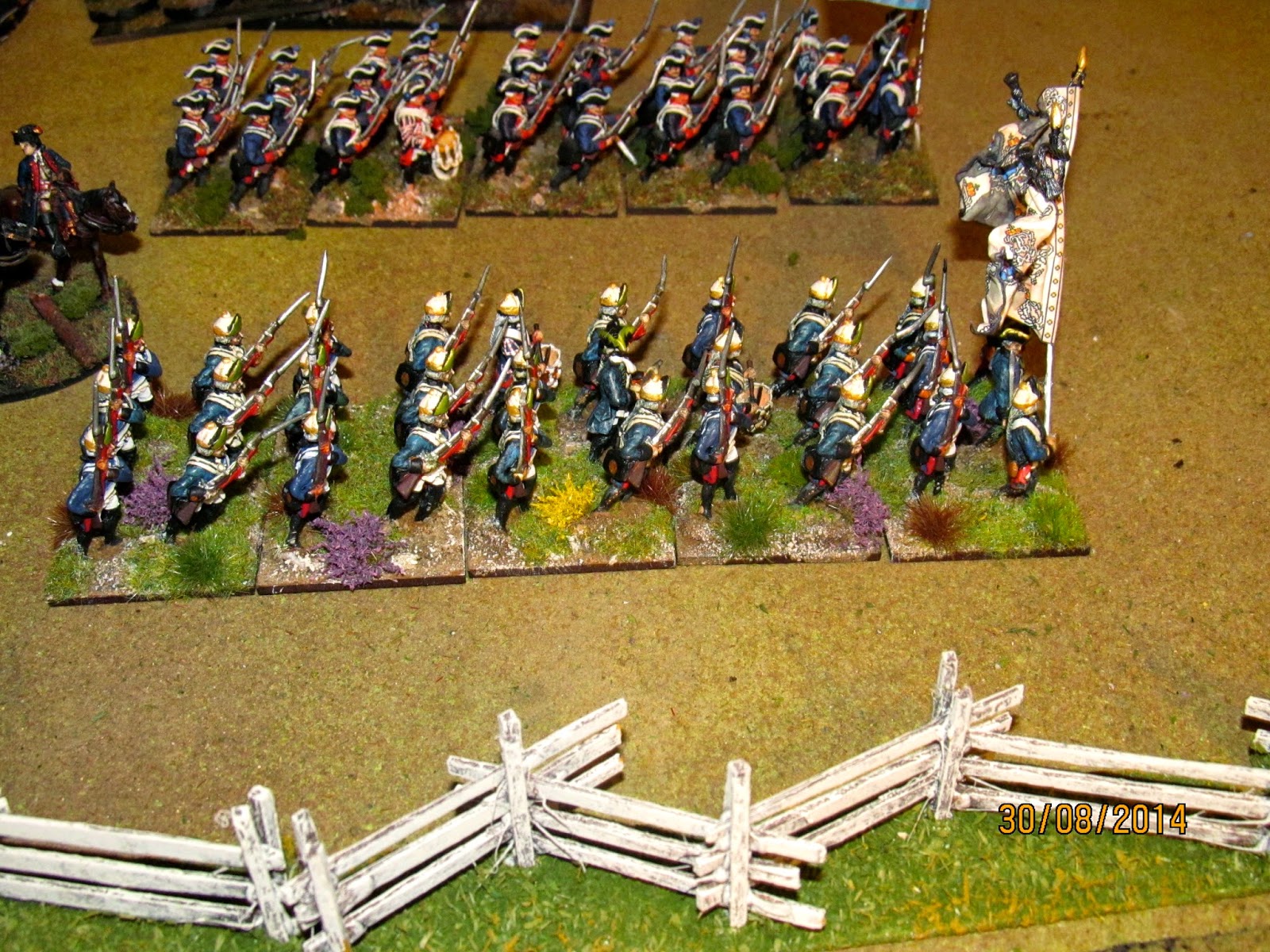 The Americans (on the right of the picture below) were deployed more or less as they had been in the previous game except for the Continental Dragoons who were moved over to the left flank. 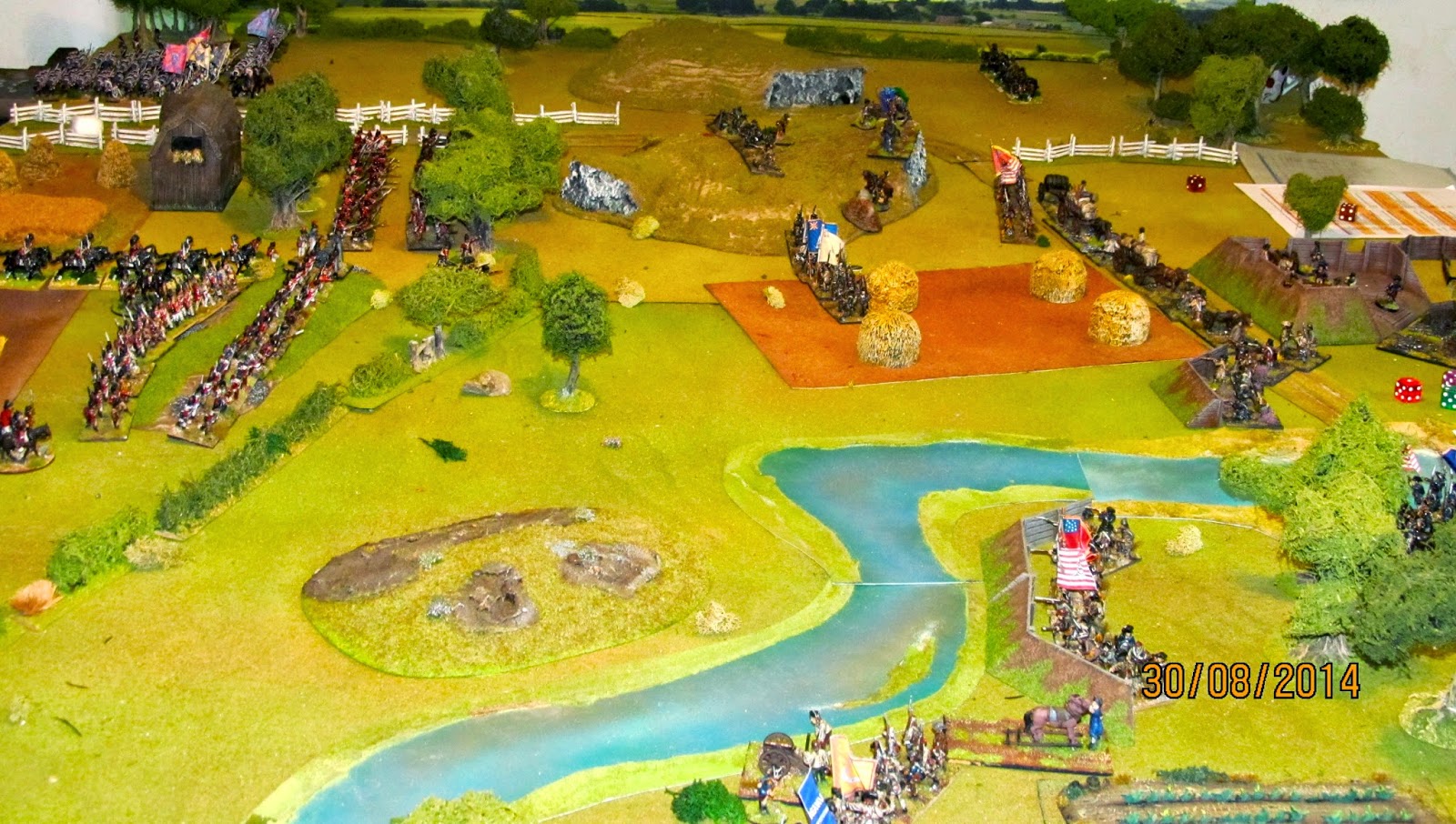 The Native American's allied to the British were quite brittle but I thought that their presence might be enough to help the right flank troops (The Queen's Rangers) drive off the American militia. Sadly, no sooner had they emerged from the woods than a volley of musketry and cannon fire hit them hard, forcing a break test which not surprisingly they failed. 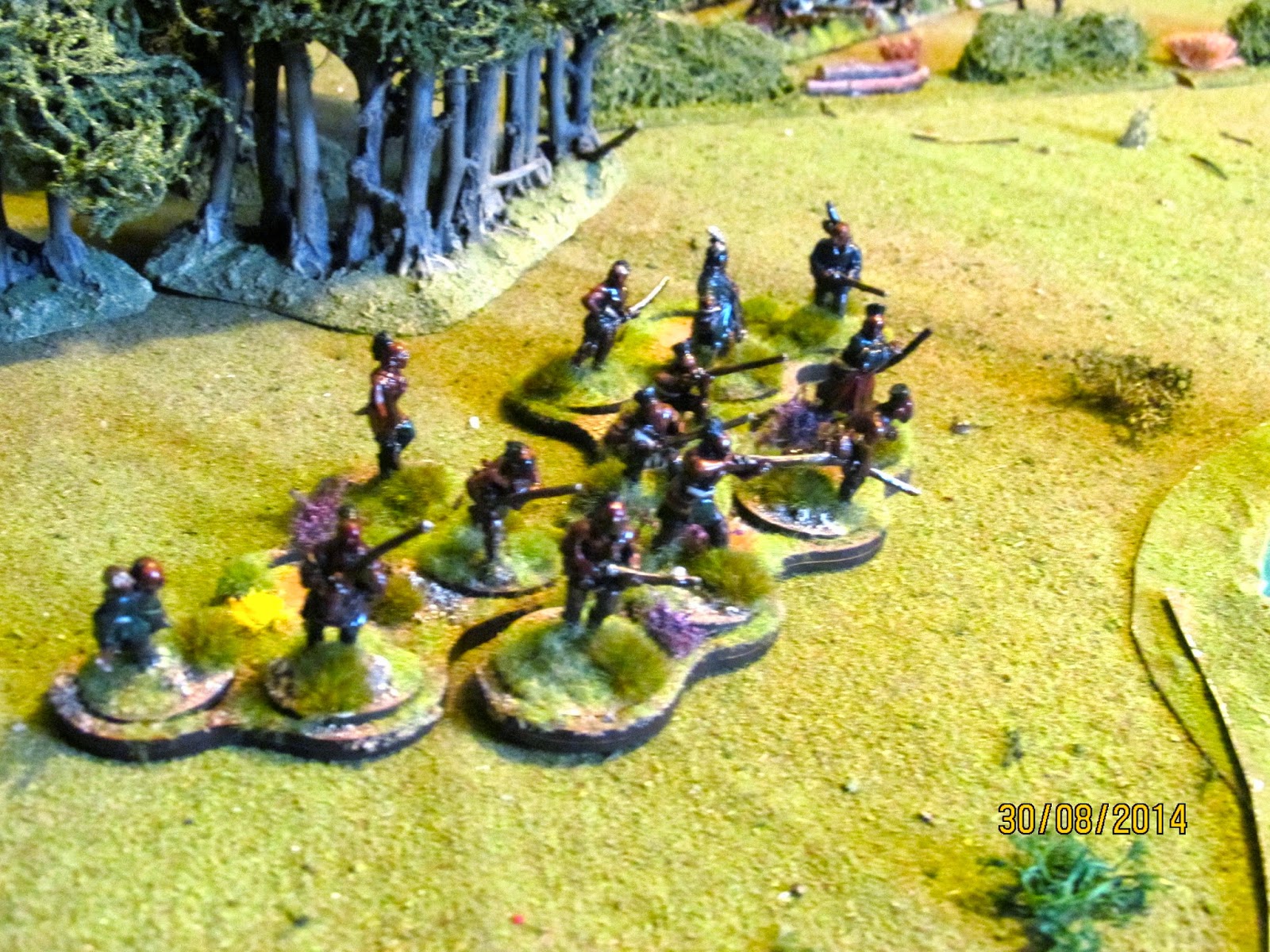 Rob moved his Continentals, Webb's and Sherbourne's regiments, to form a solid line defending the hills on his right flank, supported by a battery and a unit of skirmishers.

Rob pushed his militia mounted rifles right up towards the Hessians, without any support. Shortly after this photo was taken they were fired at and as a result they made a very precipitous retreat back to their farms! 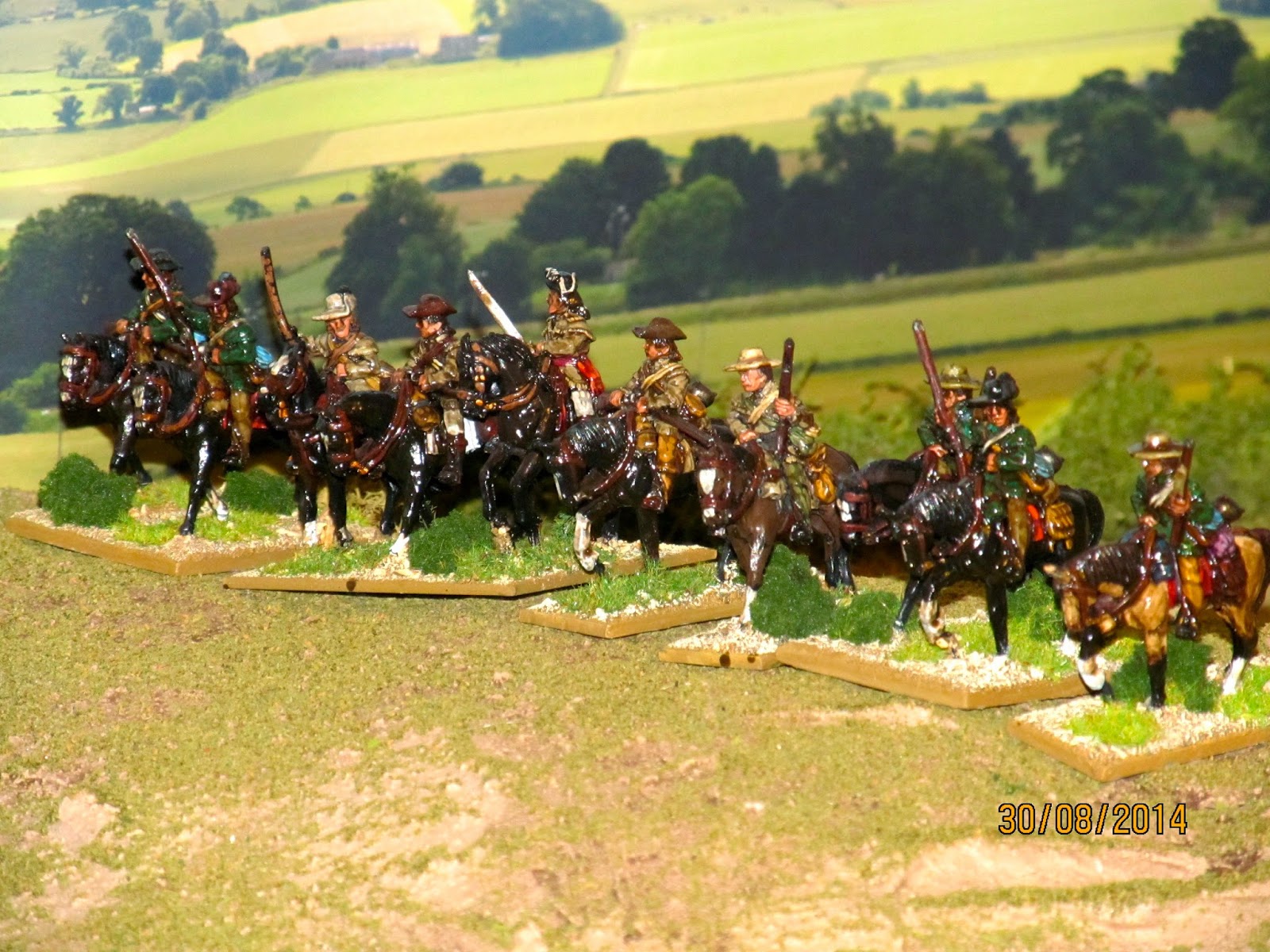 I had great hopes for my Hessian Grenadiers, especially the leading unit (another newly-based Hincliffe battalion) which can be seen here well in advance of the other battalions about to cross the stream. Sadly my hopes came to nothing and the brigade did not live up to my expectations! What didn't help were three consecutive blunders by the Hessian Grenadier commander, which rather spoiled my plans to put it mildly! 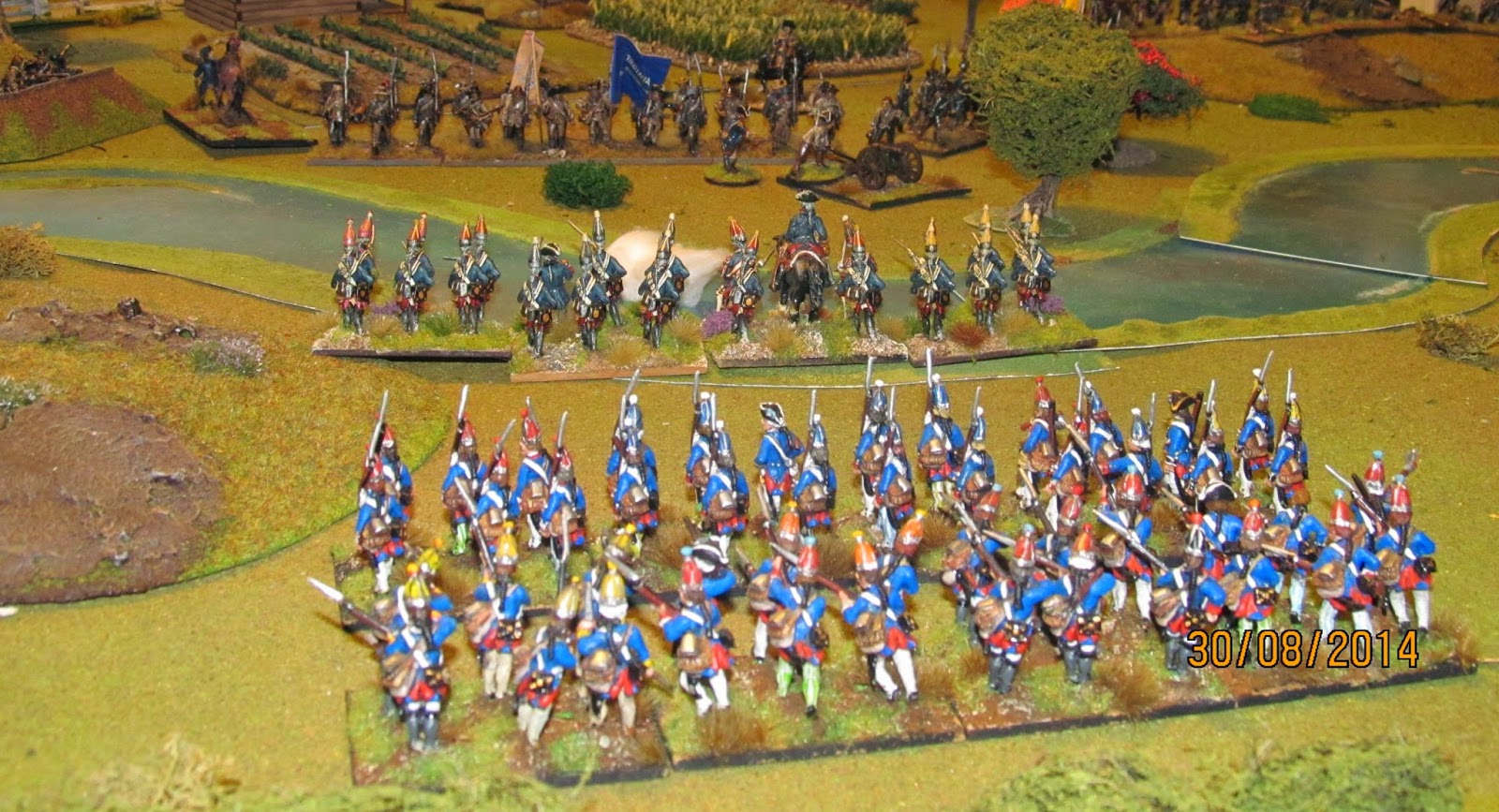 The British Grenadiers were much more aggressive this time, but perhaps my aggression was about to come to nothing (see above, big mistake #2) as, battered by American artillery and rife fire, they assaulted the American line. Despite causing severe losses and overrunning a gun battery, first one, then the other battalion became shaken and had to withdraw. 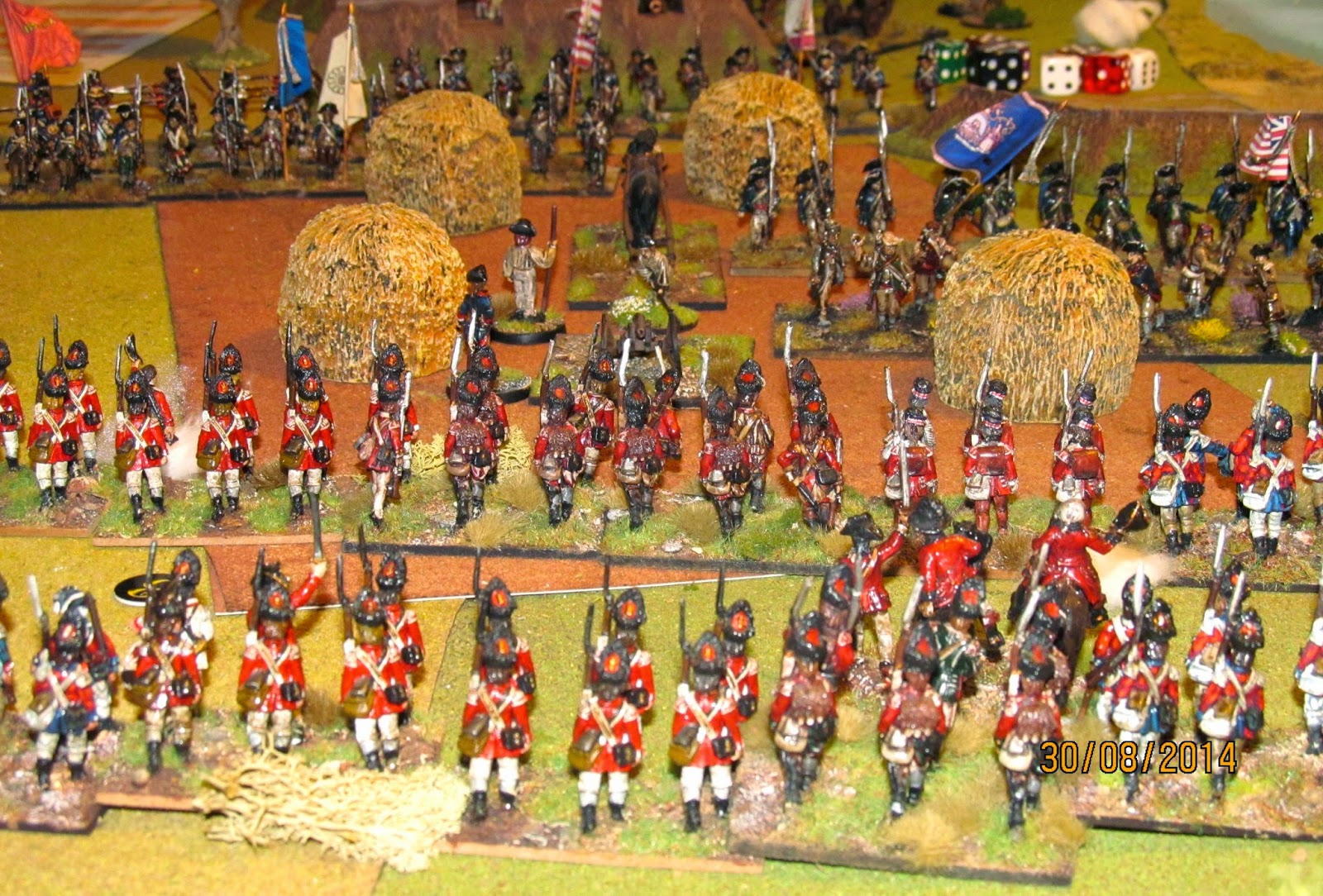 Back to the left flank, the other half of the Hessian brigade finally arrived on table, and then steadfastly refused to budge as they failed every command roll! 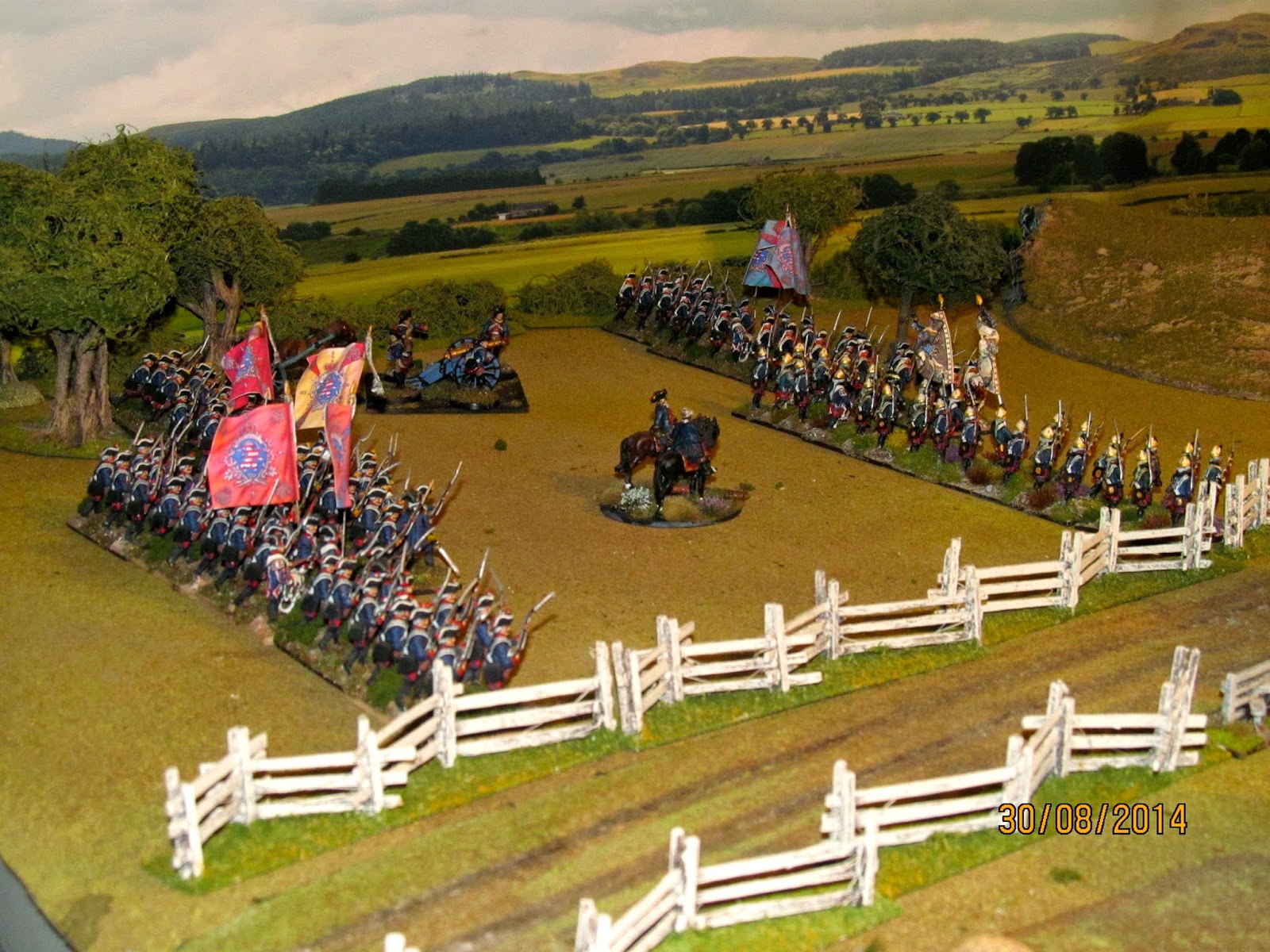 Back in the centre the British Grenadiers were withdrawing following their repulse by the Continentals. 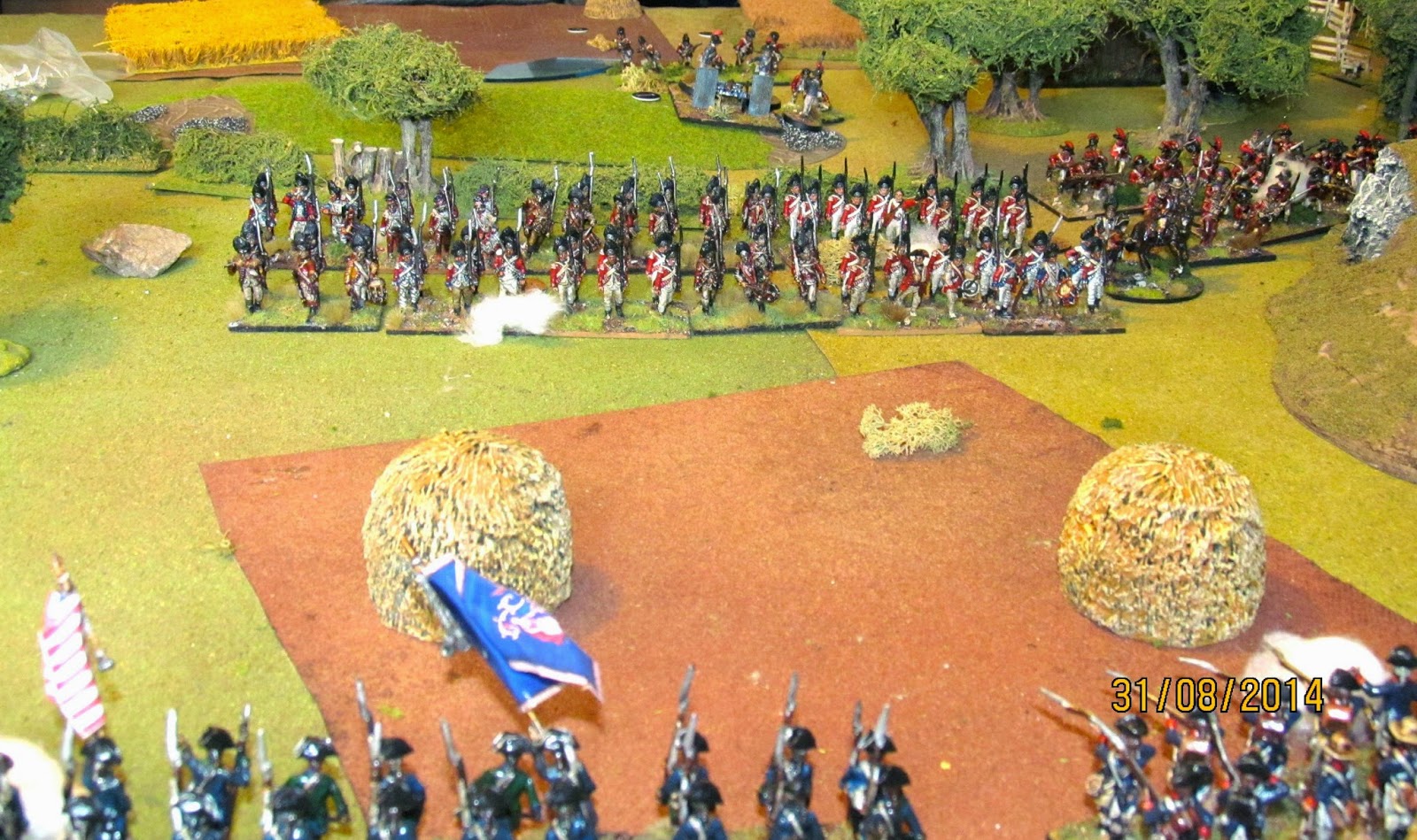 The American supply convoy made steady progress across the table, and was only slowed down twice, once at the ford and once when Rob forgot to move them! 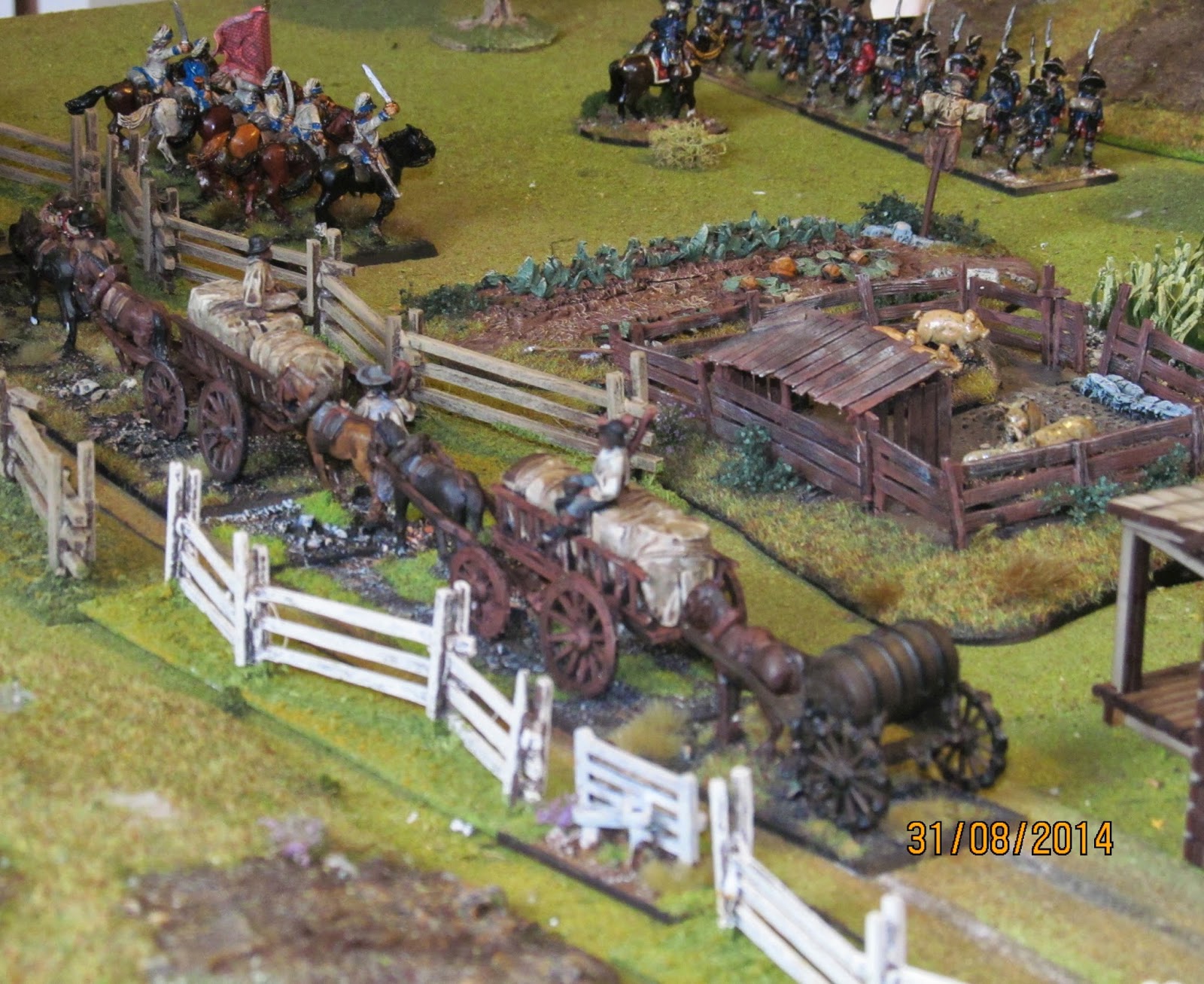 Another shot of the stationery Hessians in the background. In the foreground are the British Light infantry who were beaten back by concentrated American musket and artillery fire. It just wasn't the elite of the British army's day!

The British light battalions are shaken and retreating. I just don't know how I allowed my self to get so carried away that I forgot they and the Grenadiers had an extra stamina point (being 'large' units) and therefore should not have been shaken and as a result should not have withdrawn from the fight! 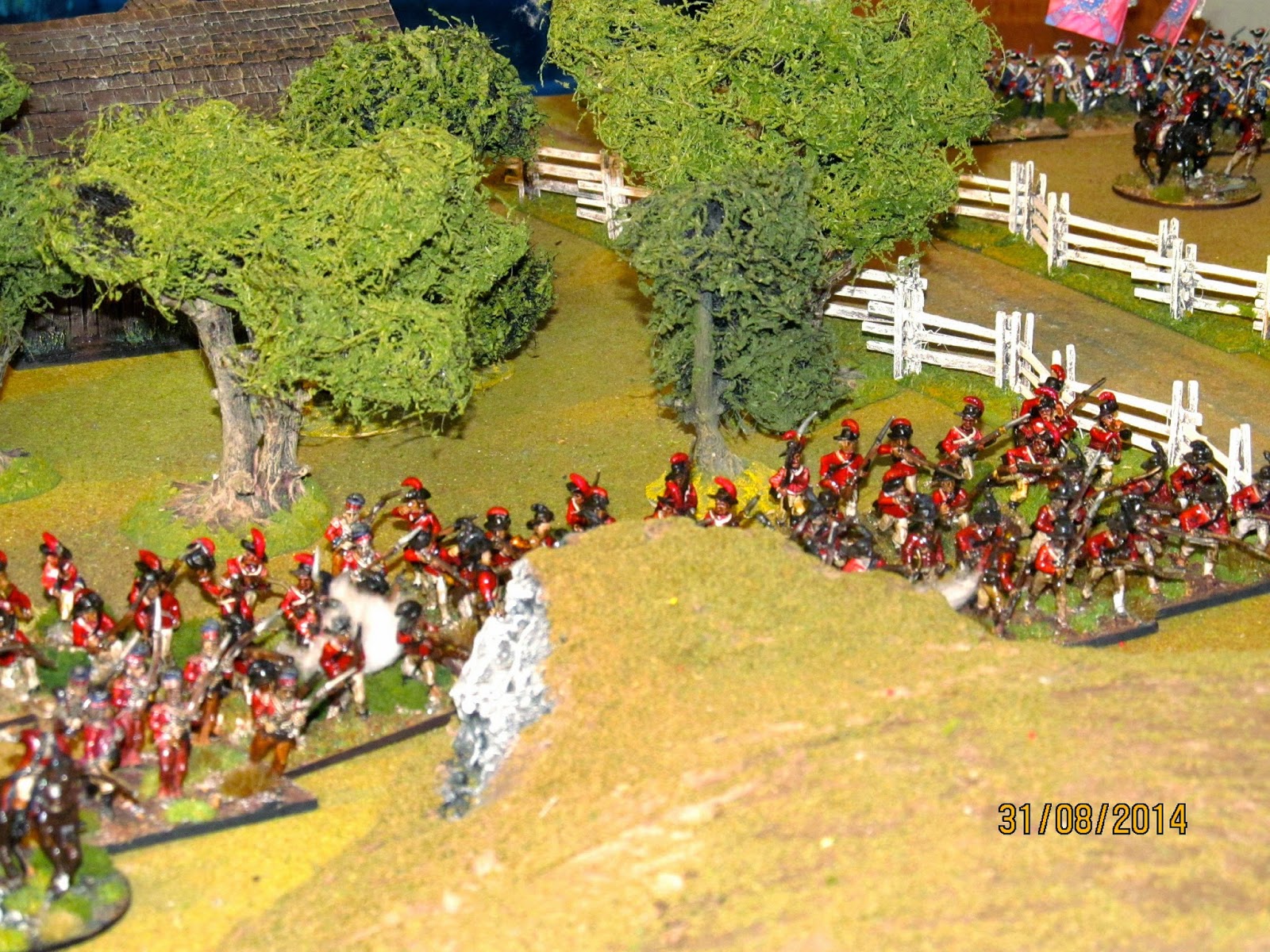 My new Hinchliffe Hessian battalion, Fusilier Regiment on Knyphausen, advancing towards the enemy. Sadly most of their brigade were stuck immobile some distance to the rear wasting a golden opportunity to fold up the American right flank.

One Hessian battalion did close with the Americans but are held; again the melee is inconclusive . 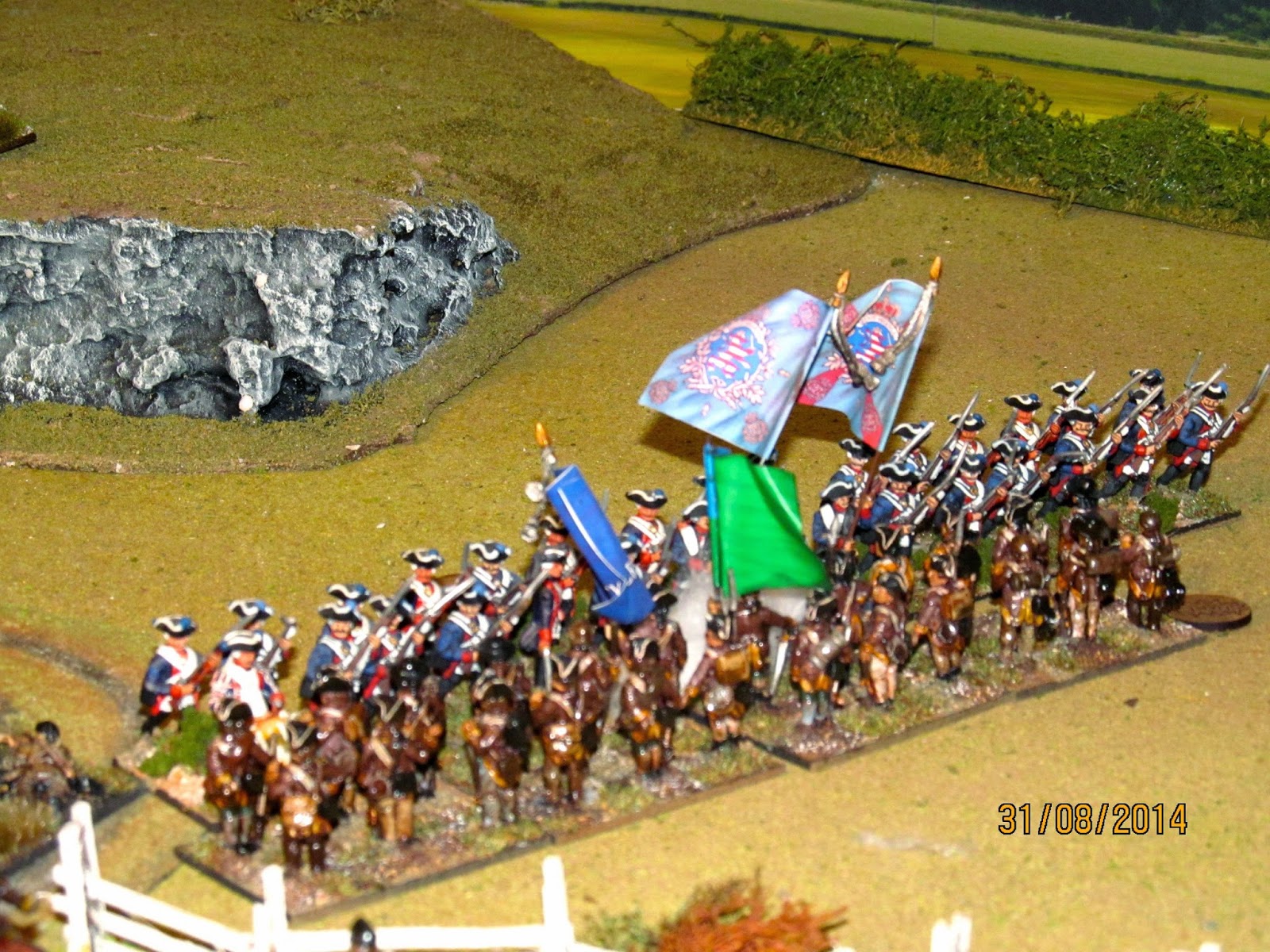 The gunners in the redoubt were a little more effective this time and caused some damage on the advancing British, contributing to their eventual withdrawal. 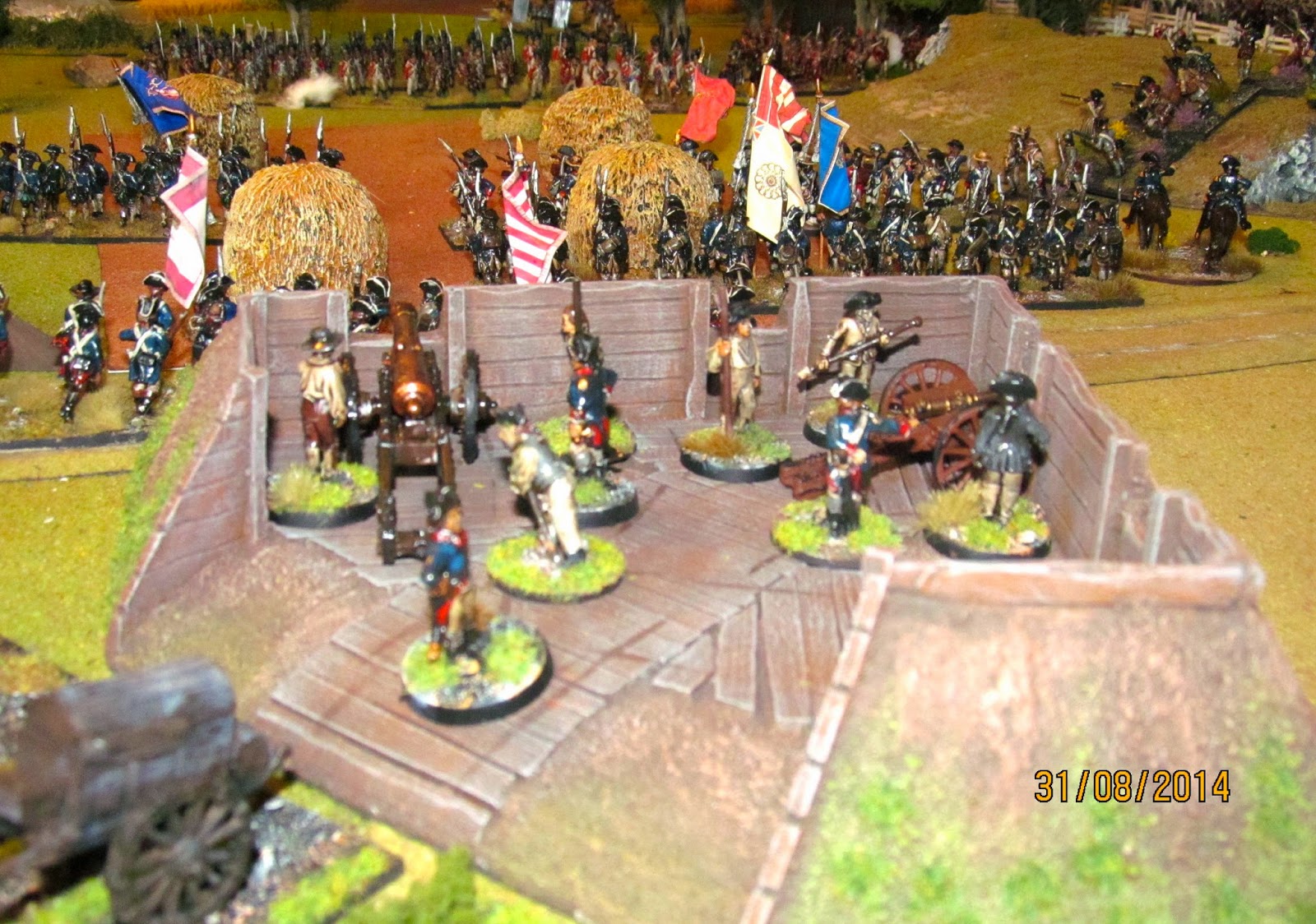 Hessian Grenadiers in the centre finally made it into contact with the militia holding the American centre but by this time the advance on the British right had stalled, the left was held up by superior numbers of Continentals and the centre had ground to a halt and the elite of the British force, the Grenadiers and Light infantry, was shaken and in retreat. 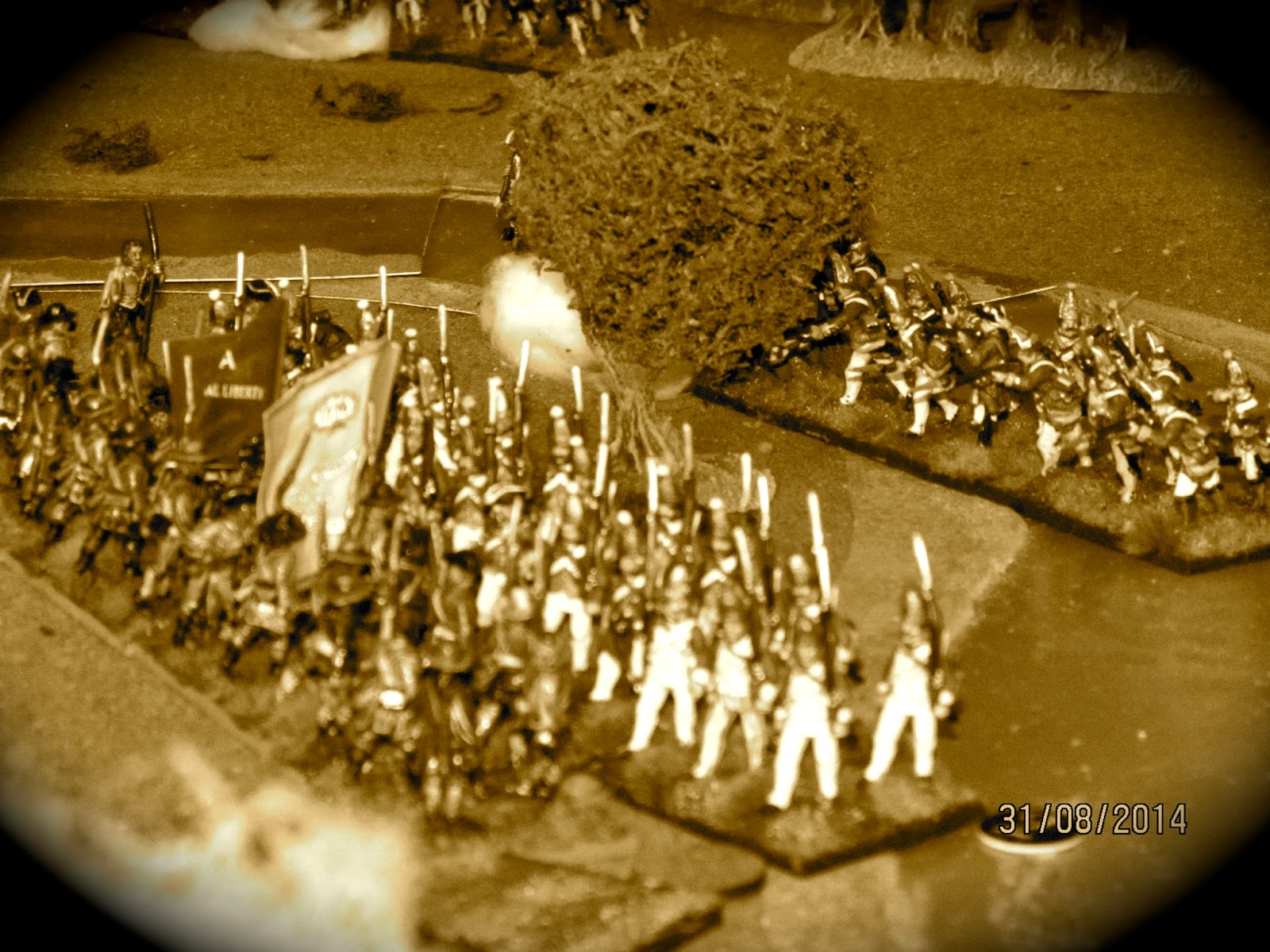 New York Continentals amongst others recovering after driving back the overenthusiastic British attack. Had I held them in check and rallied stamina points back the result would have been very different. 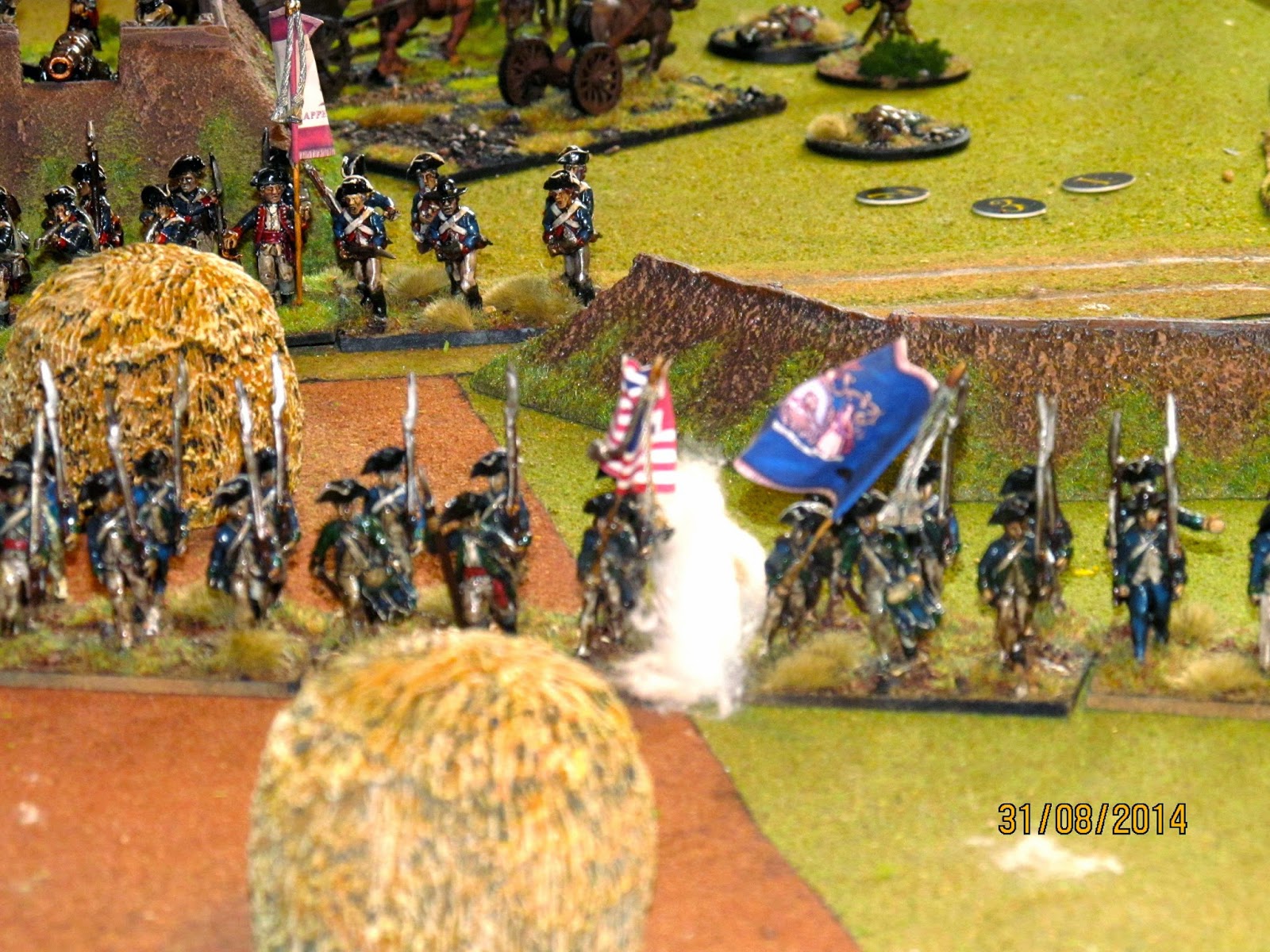 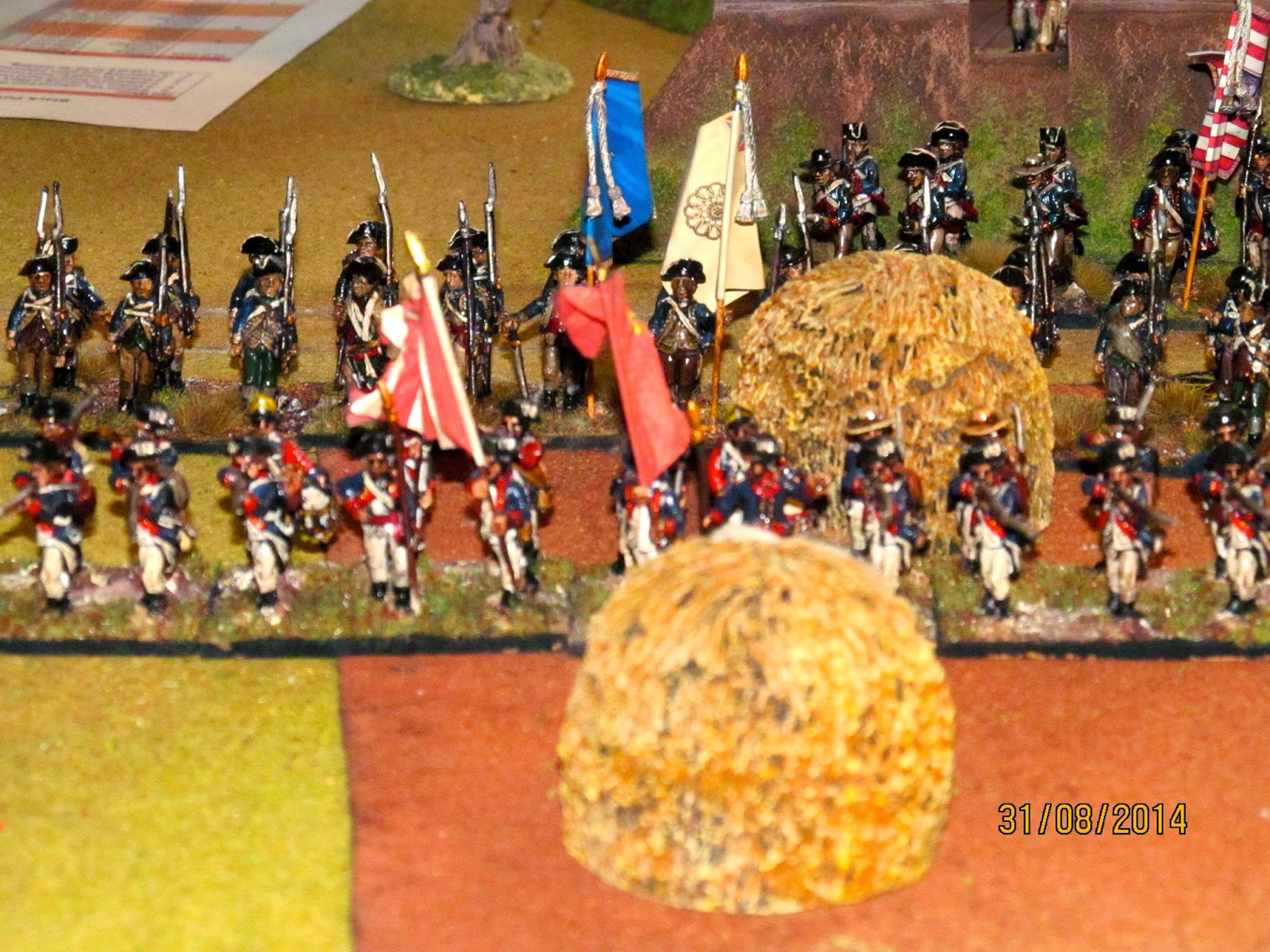 The dismounted troop of the 16th Light Dragoons were caught and badly hit by the Americans early in the battle after I had been overconfident in deploying them in a location where they were overexposed. Shaken, they had to withdraw, and this proved to be the tipping point in determining that the brigade to which they belonged (the Grenadiers and Lights) became spent. 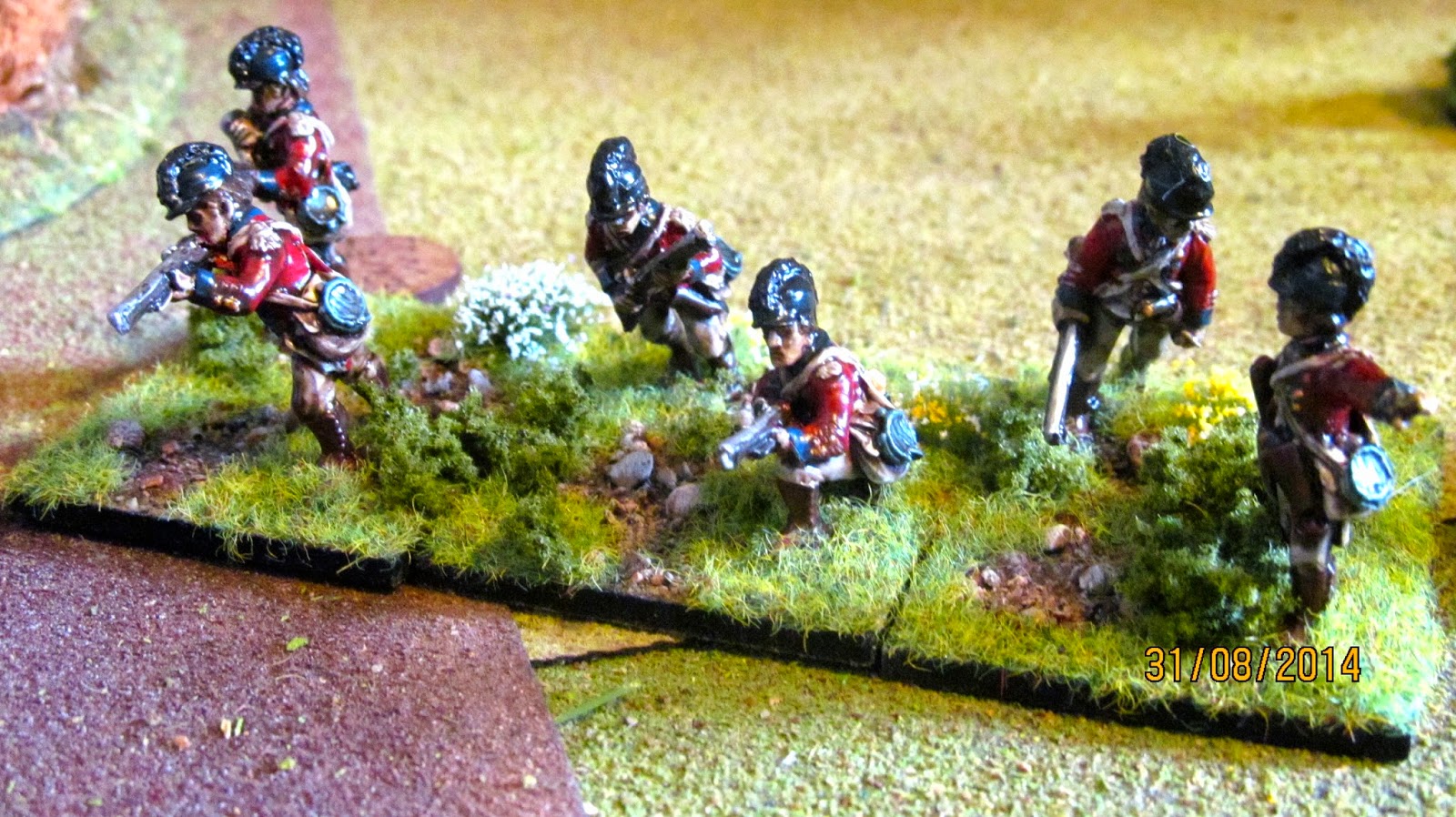 The British reserve artillery deployed on a hill in the British centre and for much of the game were masked by the blundering Hessian Grenadier brigade. When they did get to fire they proved to be completely ineffective and didn't hit a thing all game! (as the man at the back is saying, "I'll get me coat then!" - one for any 'The Fast Show' fans). 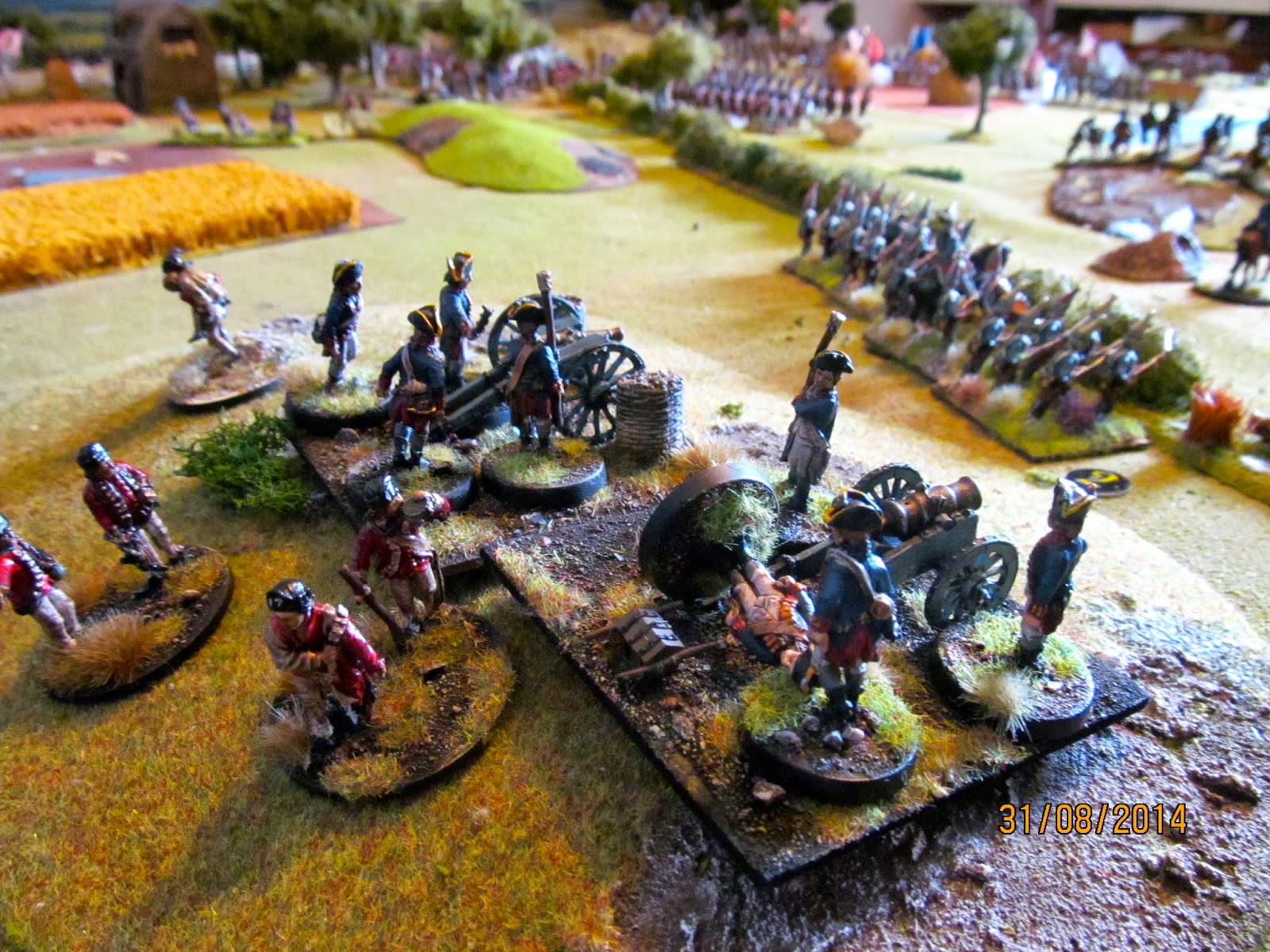 The British centre/left, with the Grenadiers and Light infantry falling back into the woods and behind the thick hedgerow.

On the British right the Queen's Rangers Hussars and the 16th Light Dragoons were unable to make a move against the enemy flank. 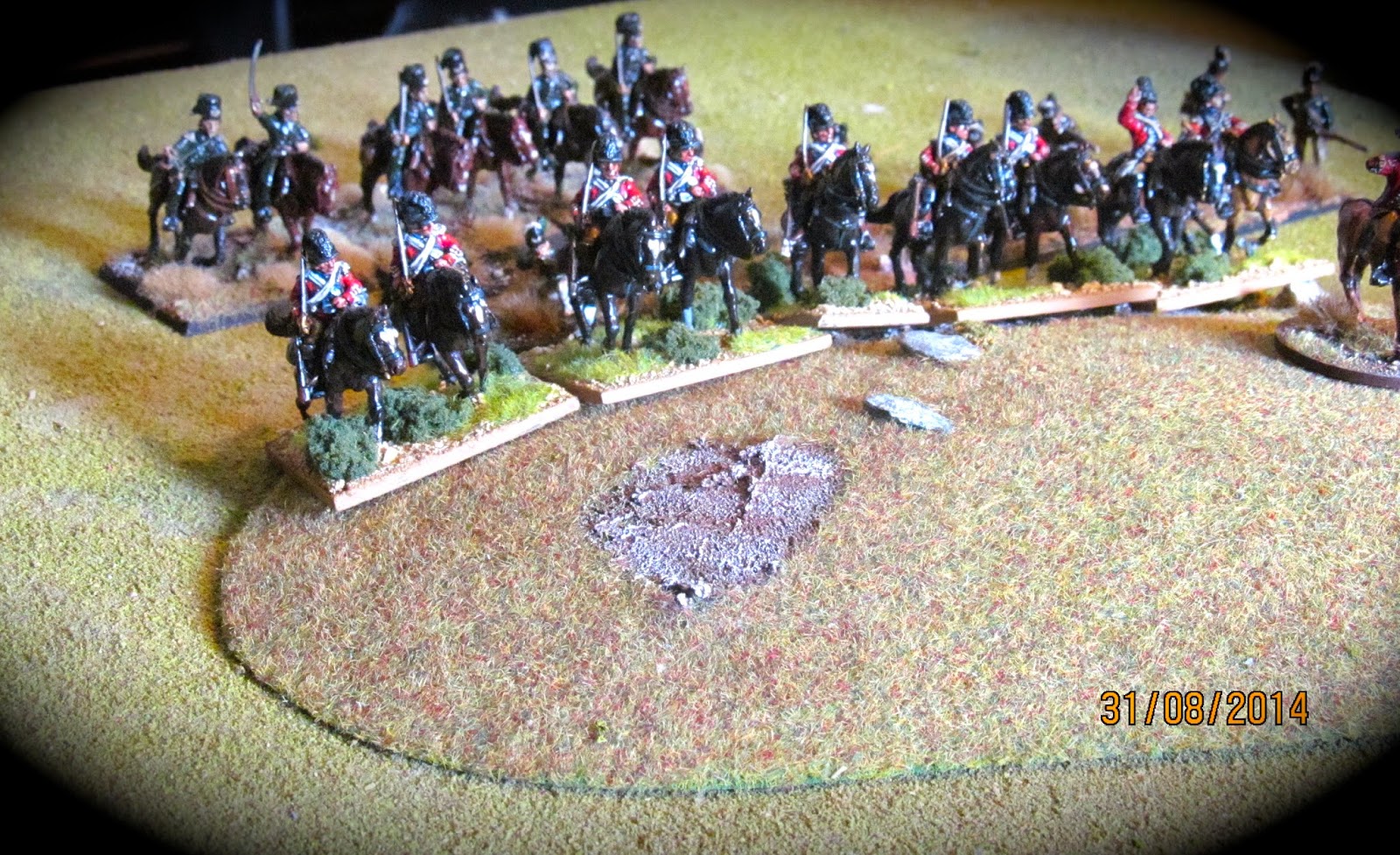 Finally, the American baggage column made otto the table edge and departed in safety. The British had failed to stop them, had failed to capture either the redoubt or the ford, and had failed to defeat the Americans. They had succeeded in showing exactly how NOT to win a battle, i.e. unco-ordinated unsupported suicidal attacks might work against some American troops, but not against decent Continentals supported by artillery. 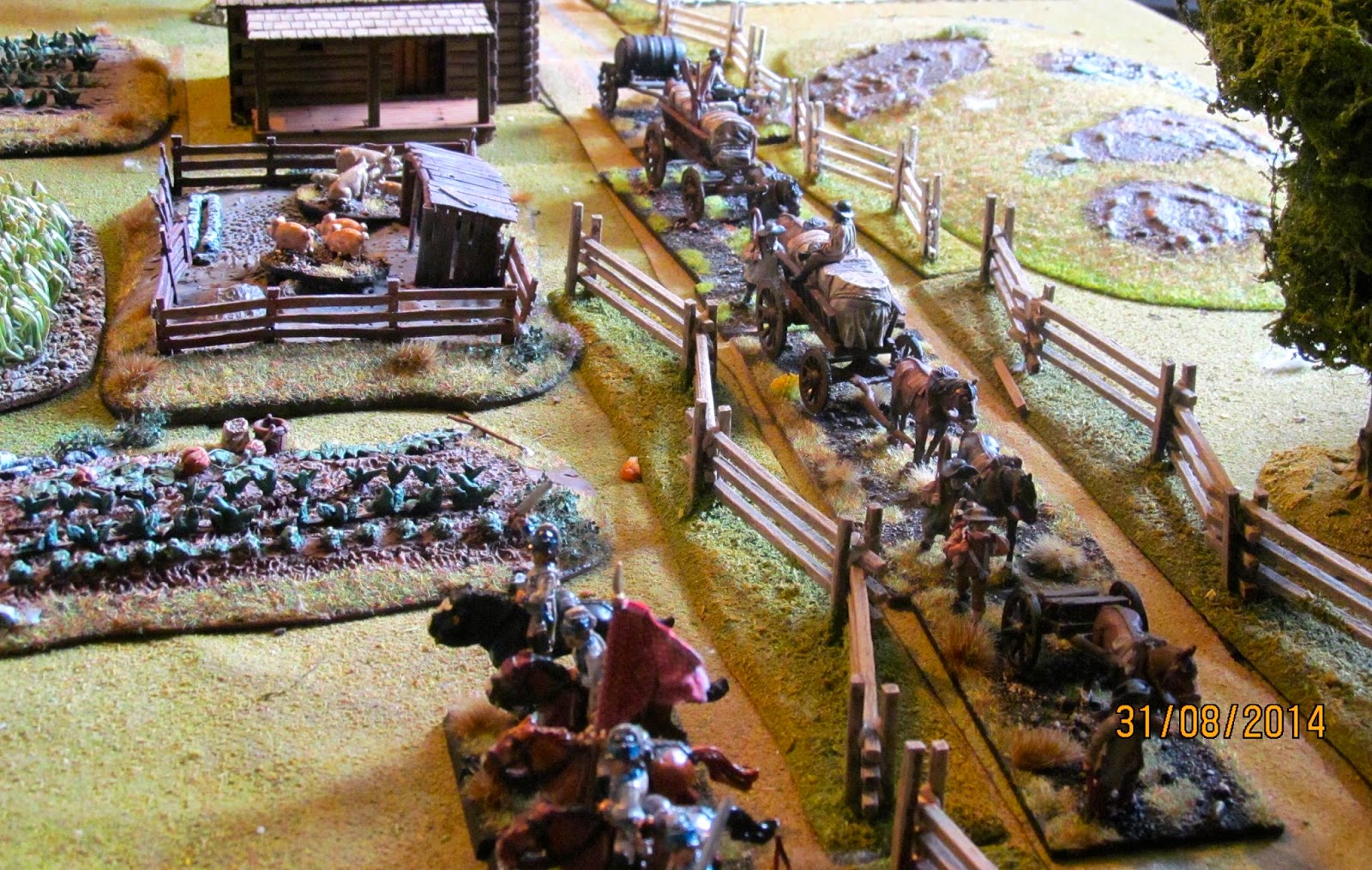 Actually it was a very good and fun game. Rob's die throwing was generally appalling at the start of the game while I managed a constant stream of 6's (5 times in a row) when trying to hit and/or save; a run that came to an end with the three consecutive moves of double 6's (resulting in blunders) thrown when trying to get the Hessian Grenadiers into forward gear ALL AT THE SAME TIME! That would have been very helpful. Rob normally gets his fair share of blunders but this time only managed it once, and it didn't spoil any of his plans at all.

The Hail Caesar break test table worked really well as it added a certain something and another level of uncertainty to the game. It certainly meant that it was risky to have your skirmishers exposed up front as it proved to be quite annoying seeing them suffer casualties from a line or a battery and come tumbling back to safety. Not unrealistic I reckon. We also had plenty of units dithering while disordered and everything felt right, even when my soopa doopa Grenadier thugs got bounced! I am now getting very excited about the imminent arrival (I hope) of the BP AWI supplement. NOT because I am a slave to rules and army supplements, but because I am very interested to see how Steve has translated the 20 or so real battles into workable BP scenarios.

My next planned game isn't until mid-August when Conrad is coming up, but I hope to get another game in before then, depending on my health.
By Colin Ashton - August 02, 2014