Way back in the 1970s when the Durham Club met at Derek Sharman's Wargamers' Den shop (the upstairs one) we had a massive collection of German Faller plastic building kits. One of these was a factory complex with the word 'Schrauben' on a sign above the door. Well, the kit is long gone but my memories of the Schrauben factory remain, although remembering what I did yesterday is another matter! Anyway, I own some PMC buildings, including a factory, so I thought I'd use them as the centrepiece for my recent game with Paul. 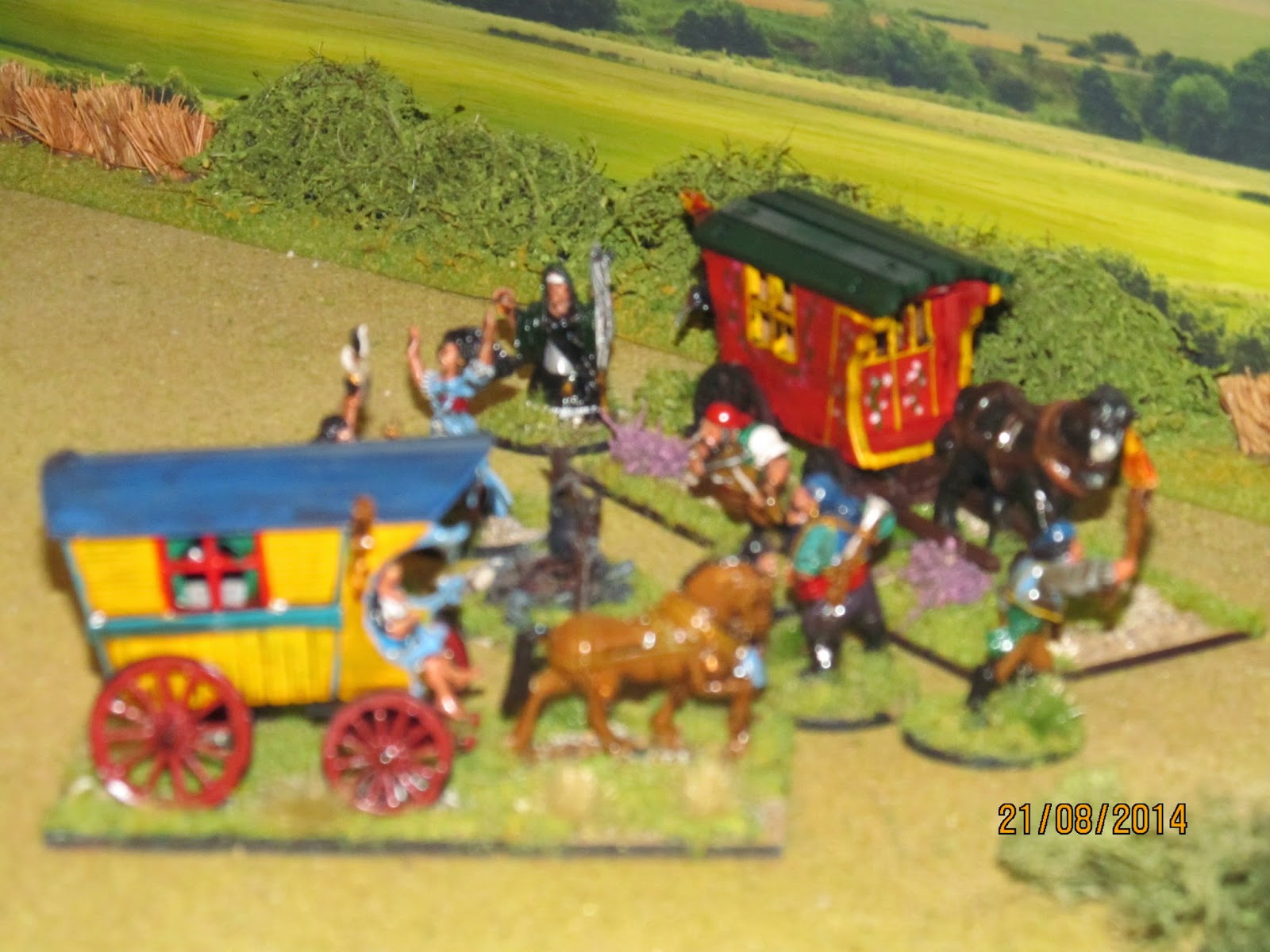 (Above, its those Gypsies again, with a new caravan! Below, the Schrauben factory, defended by two battalions of French) 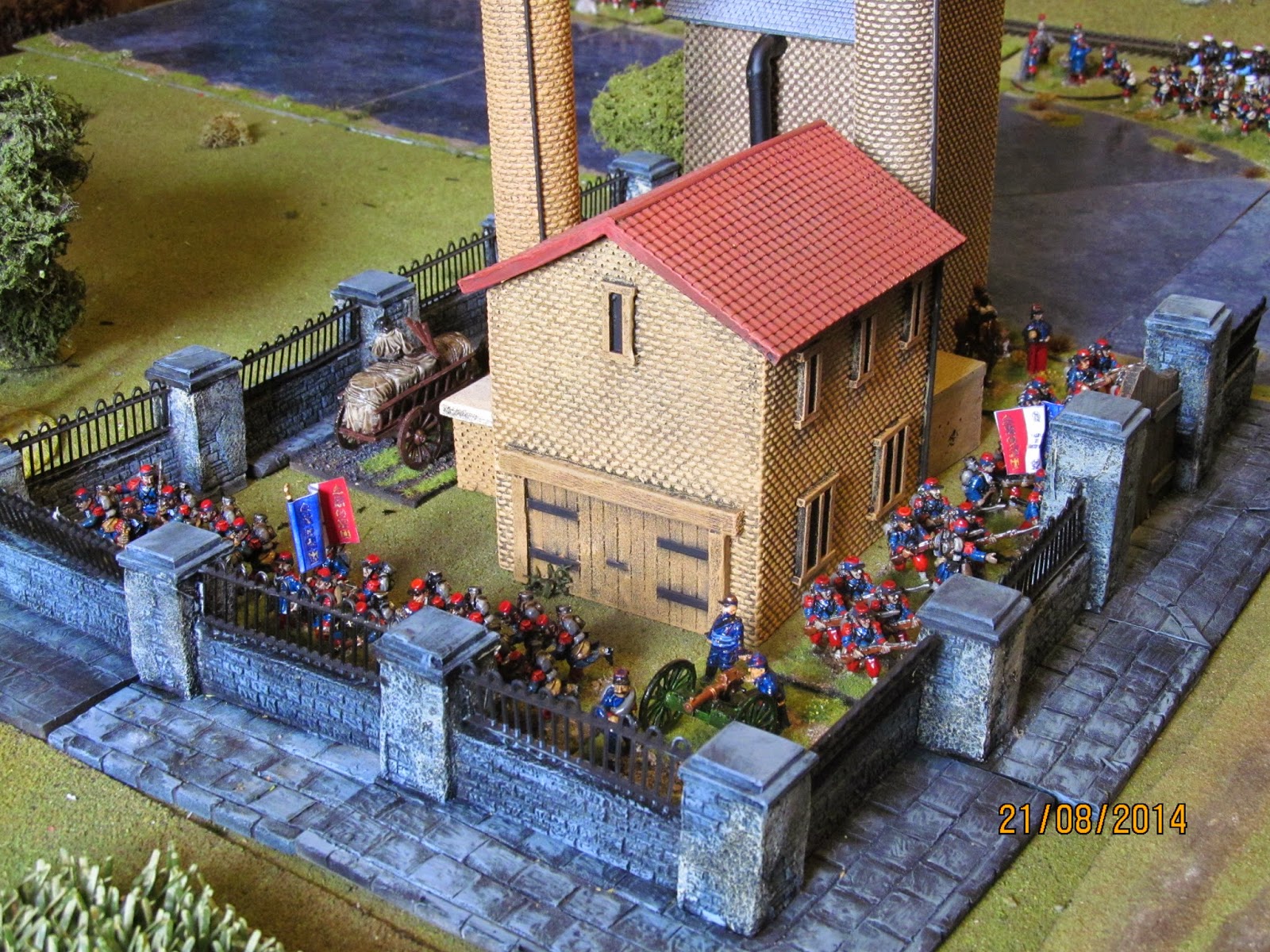 In this scenario we are in Alsace. The French have garrisons in the factory and the village in the centre of the table. Their main line of defence is along the railway line running more or less left to right until it crossed the river and curved towards the Prussian side of the table. The French deployment area extended beyond the river to the far table edge. The river was crossable without movement penalty but troops doing so were classed as disordered at the end of the turn they emerged from the river. The Prussians had to capture the factory before the French could evacuate it after turn 6 and save essential industrial parts, namely several wagon loads of Schrauben making machinery.  They then had to get their army off anywhere along the part of the baseline covered by the river. All the Prussians had to do was capture the factory, prevent the equipment from being spirited away and destroy the French army before it could escape. Mmmm? Not easy for either side.

Forces were as follows:

I used some of the additional rules for commanders, such as hesitant, headstong and impetuous, which when we remembered to apply them added some extra uncertainty to the game. We also used the slightly amended Hail Caesar break test sheet rather than the Black Powder one, which had worked well in previous games. 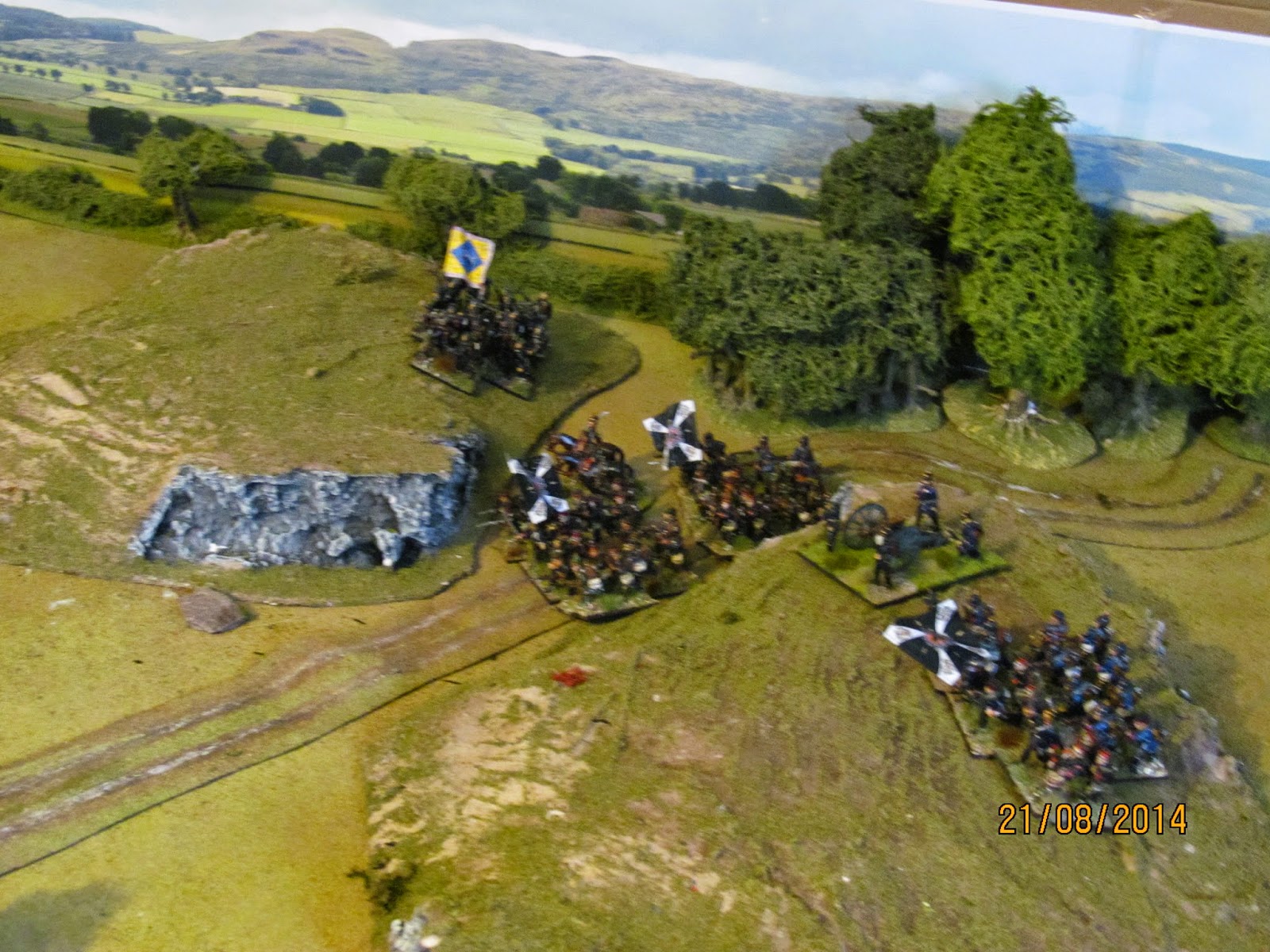 (Above, the Prussian advance guard enters the battlefield. Below, the French army deployed and ready to give them a bloody nose!) 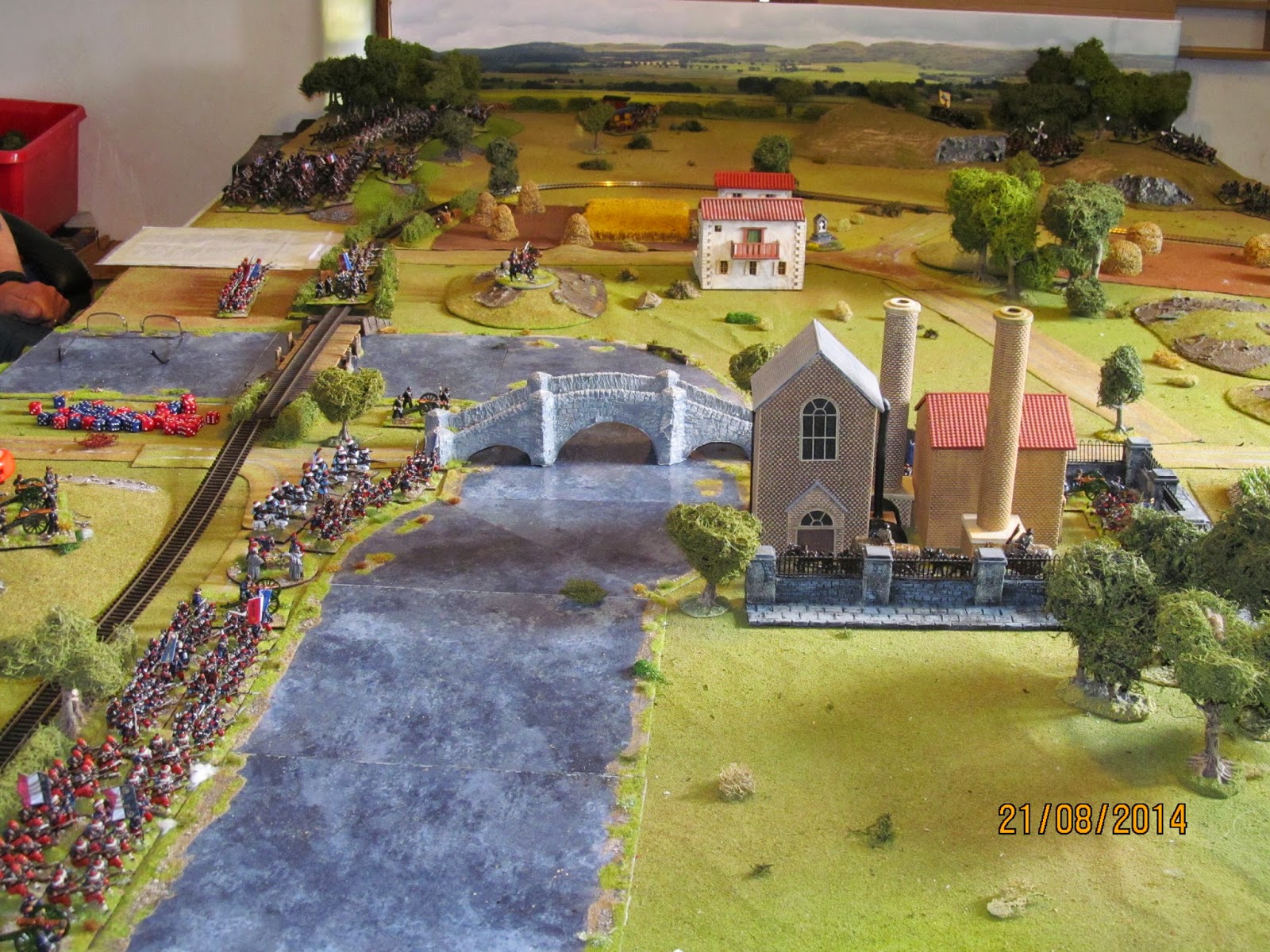 Paul deployed the French pretty much as can be seen in the photo above. His cavalry were deployed way off on the left flank with a lone infantry brigade across the river holding the line of the railway cutting and supporting the garrison of the village.

The Prussians could appear on either of the roads and in turn 1 the advance guard entered on the far right opposite 7 regiments of France's finest cavalry. I put a couple of battalions on the hill to cover my flank and pushed the rest of the brigade, together with the following infantry brigade towards the village in the centre. As they arrived, the artillery deployed together on another hill to bombard (very unsuccessfully) the village.

Meanwhile the other Prussian infantry brigade had arrived in the centre. I immediately (but slowly due to a blunder) formed them up into assault columns and went for the factory. Paul had pushed his 1st brigade across the river and after reforming these were starting to pose a threat to my exposed left flank. Four battalions of French supported by a battery each of artillery and mitrailleuse could do some damage and disrupt my attack. 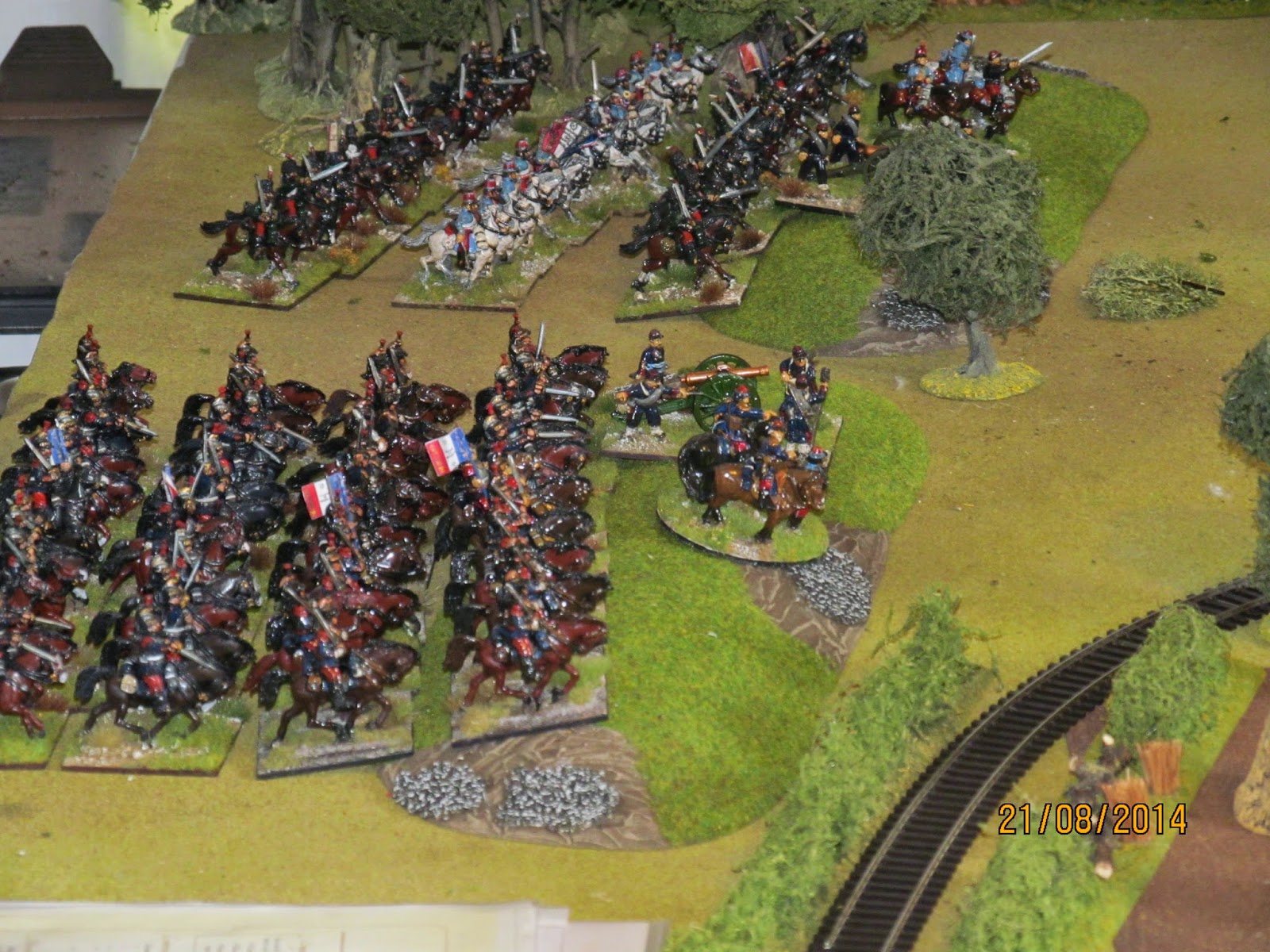 (Above, the French Reserve Cavalry Division lurking behind the hills while on the other flank the 1st brigade crosses the river). 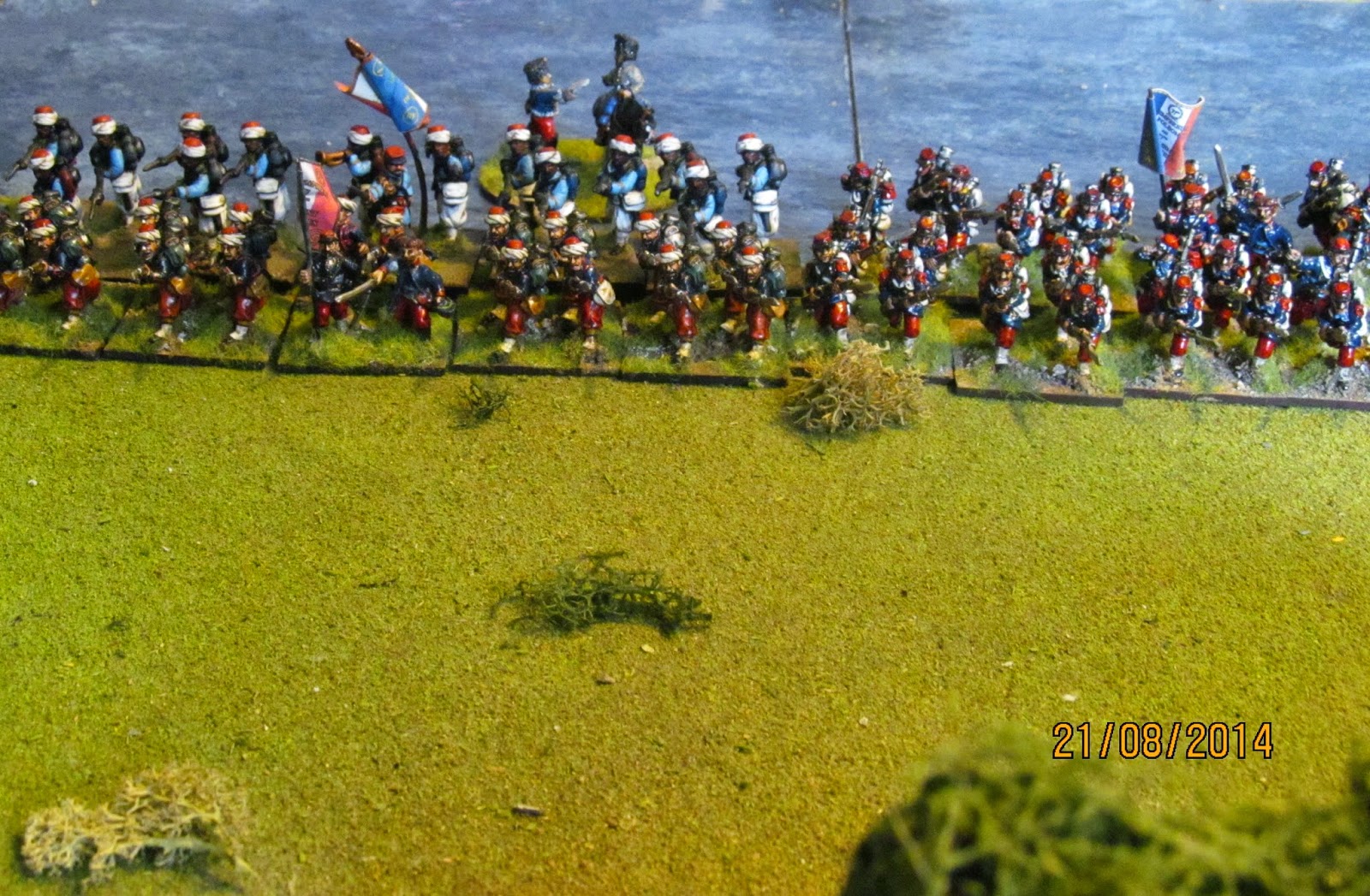 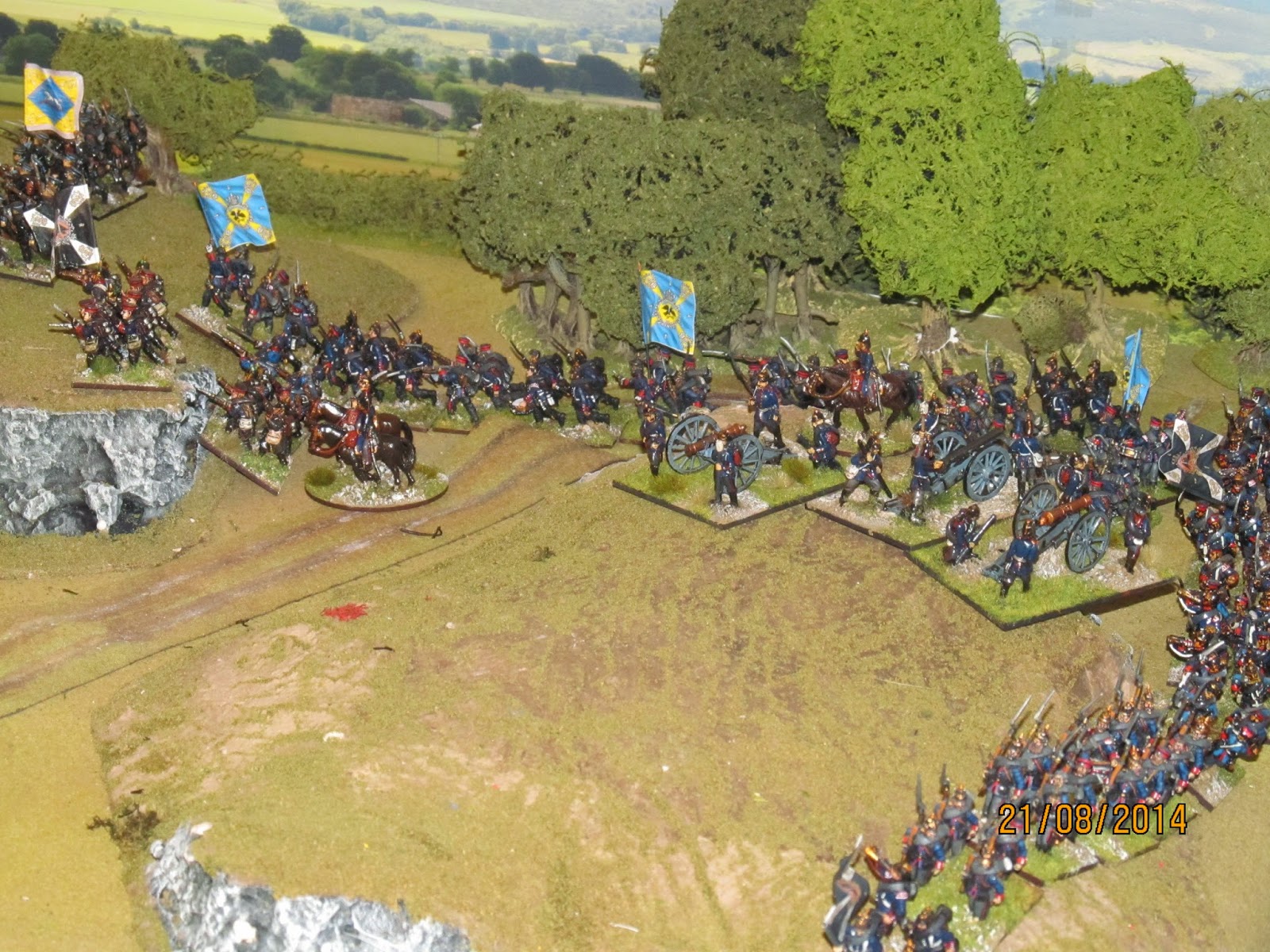 (Above, the Prussian masses surge forward while below French Marine infantry supported by a line battalion hold the railway cutting in the centre of the French position) 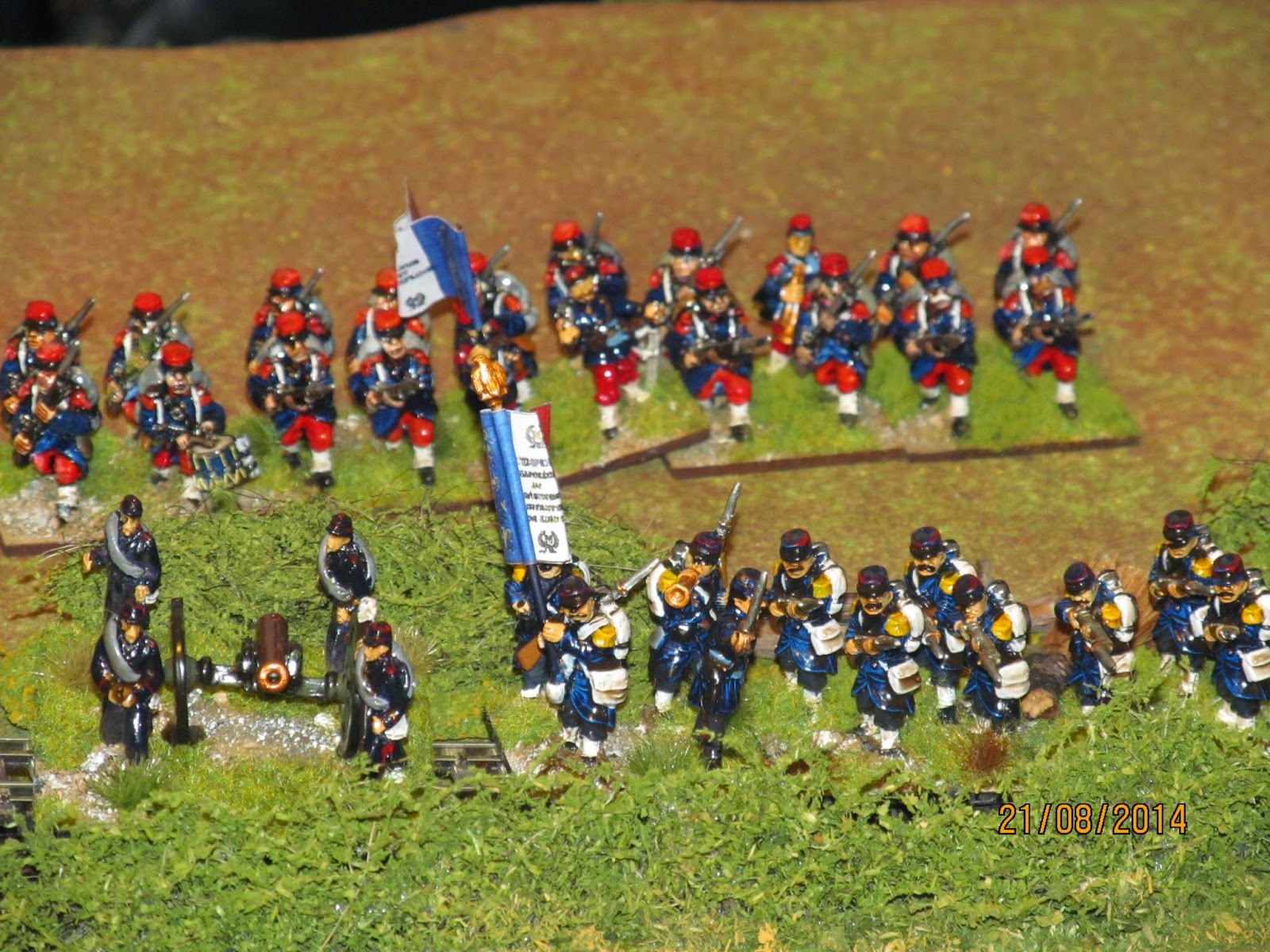 The last Prussians to arrive were the Reserve artillery and two brigades of cavalry. The former deployed on a hill in the centre and their mere presence covered my centre from any interference from the French in the railway cutting. The cavalry just deployed and lurked out of sight on the base line, while their attached horse artillery made themselves useful, especially on the Prussian left where all that was holding the French back were three batteries of artillery and a lone battered battalion of infantry. 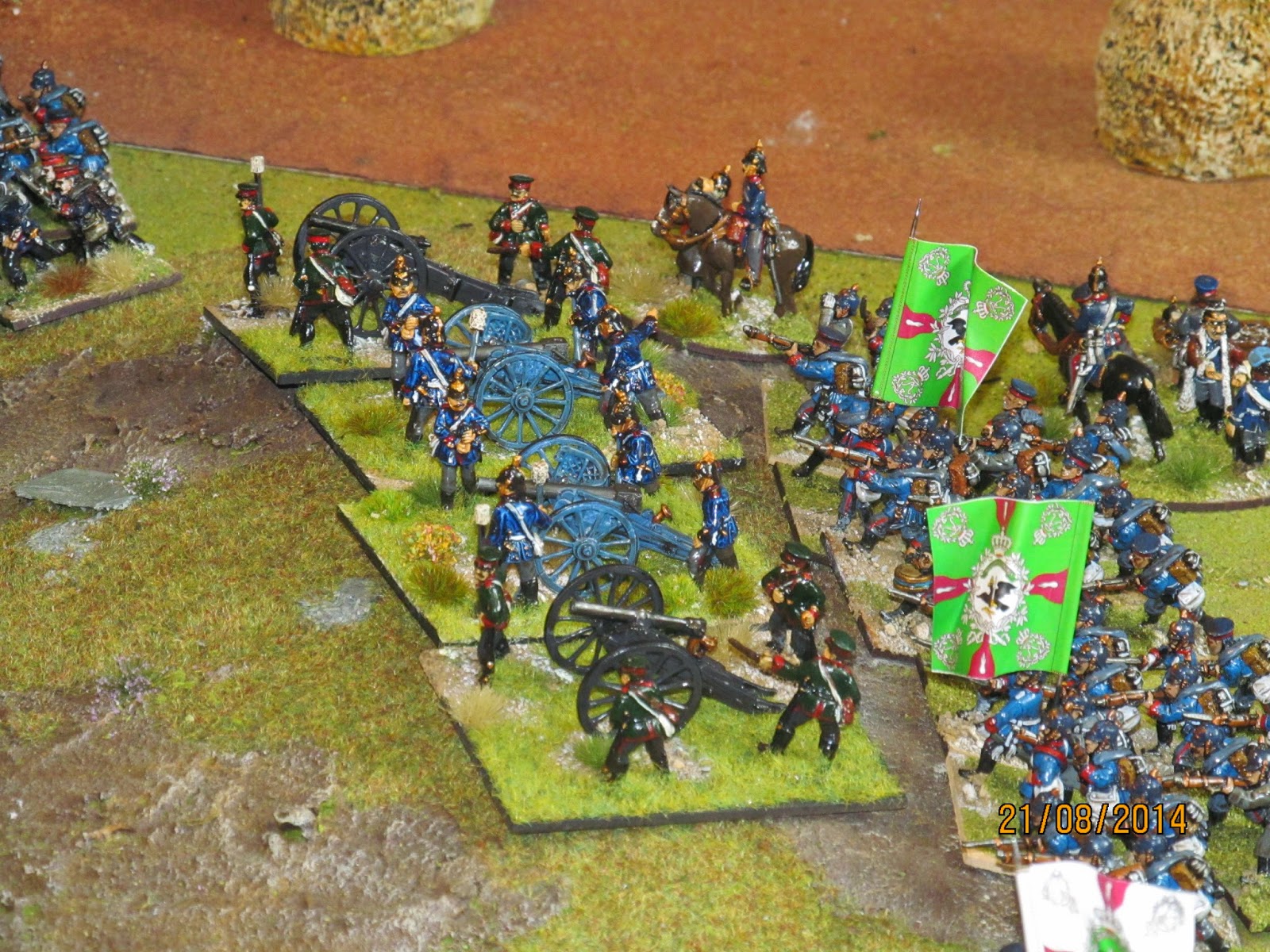 (Above, the Prussian reserve artillery bombards the French while below, the assault on the Schrauben factory in full swing!) 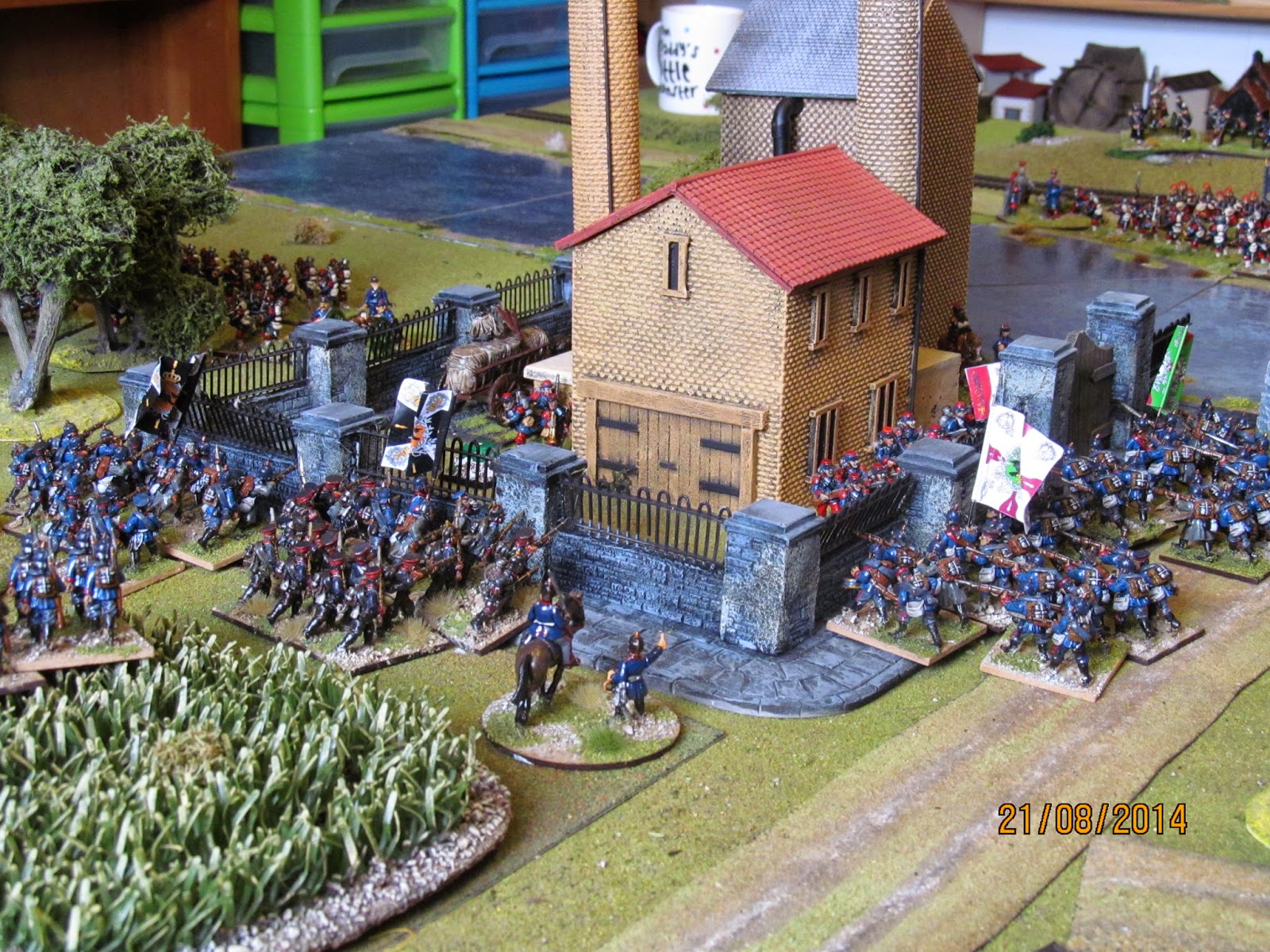 The attackers of the factory got to grips with the French defenders but it took 4 or maybe 5 turns before they were able to bring enough strength to bear to be able to break in and eject the French. In the centre, half of the garrison of the village had been forced to retreat and their place was taken by a battalion of Prussians who rushed in, beating a battalion a French Marine infantry by a whisker. 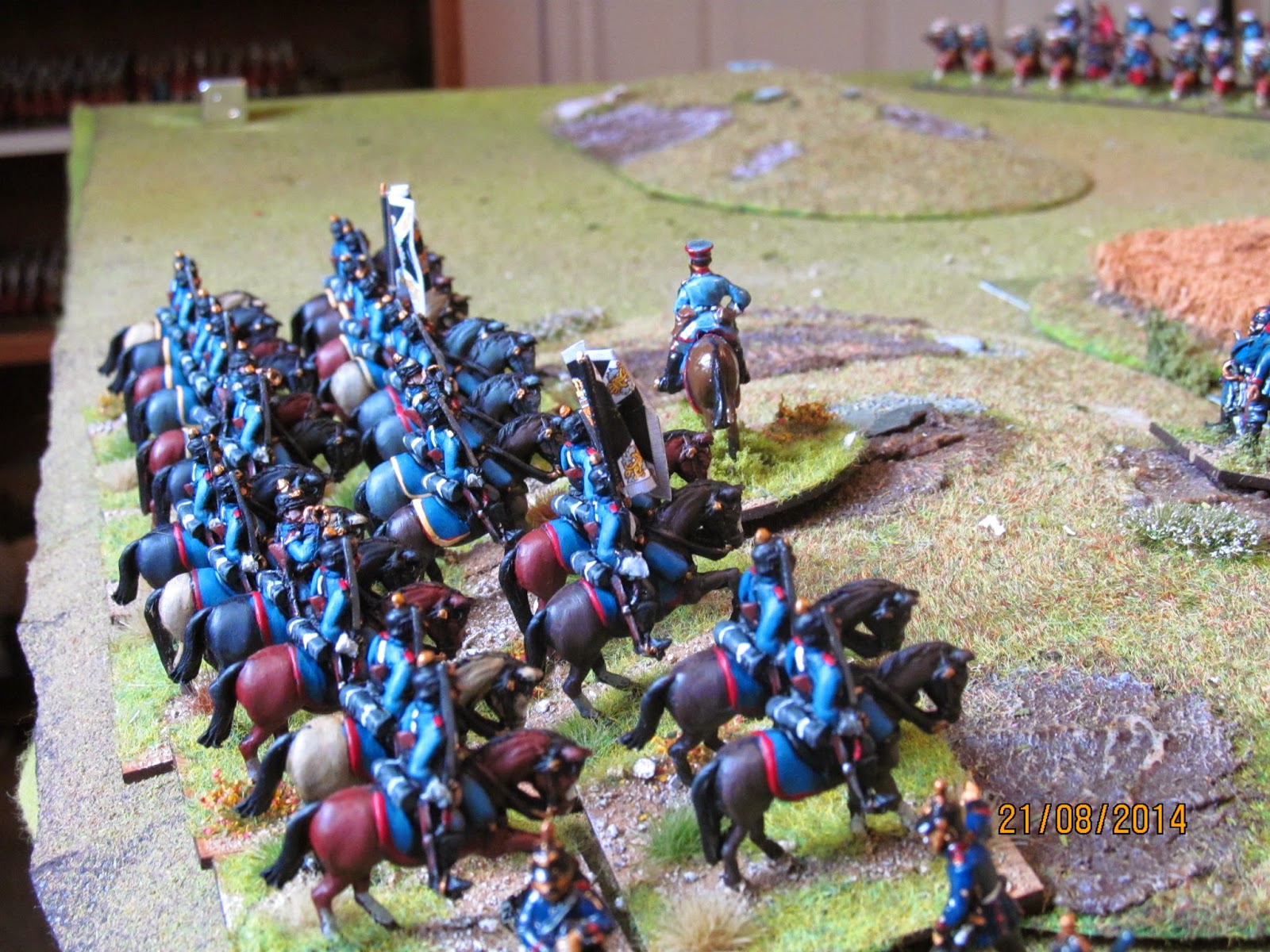 (Prussian cavalry. Above, two regiments of Dragoons and below a regiment each of Cuirassiers and Hussars). 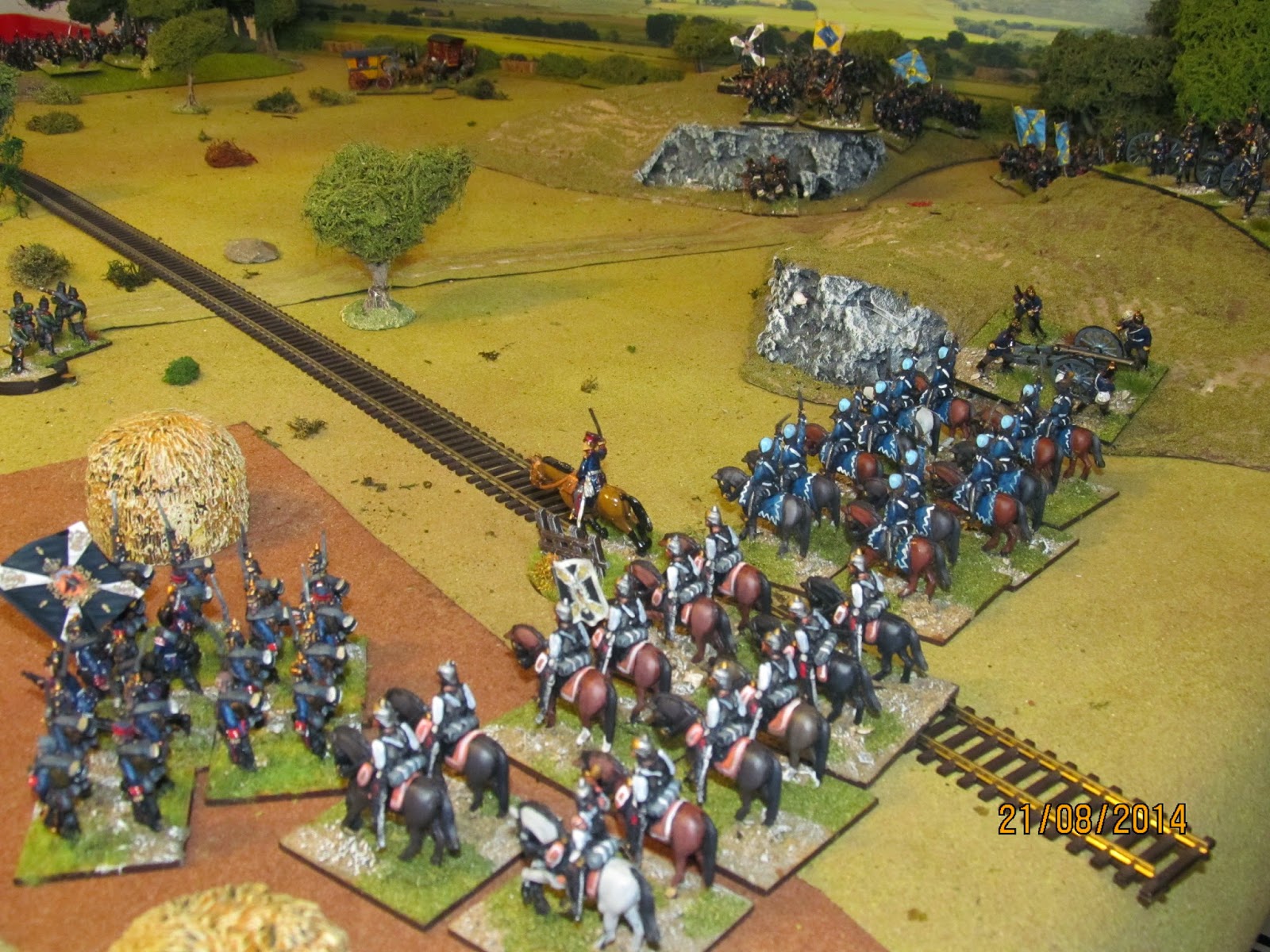 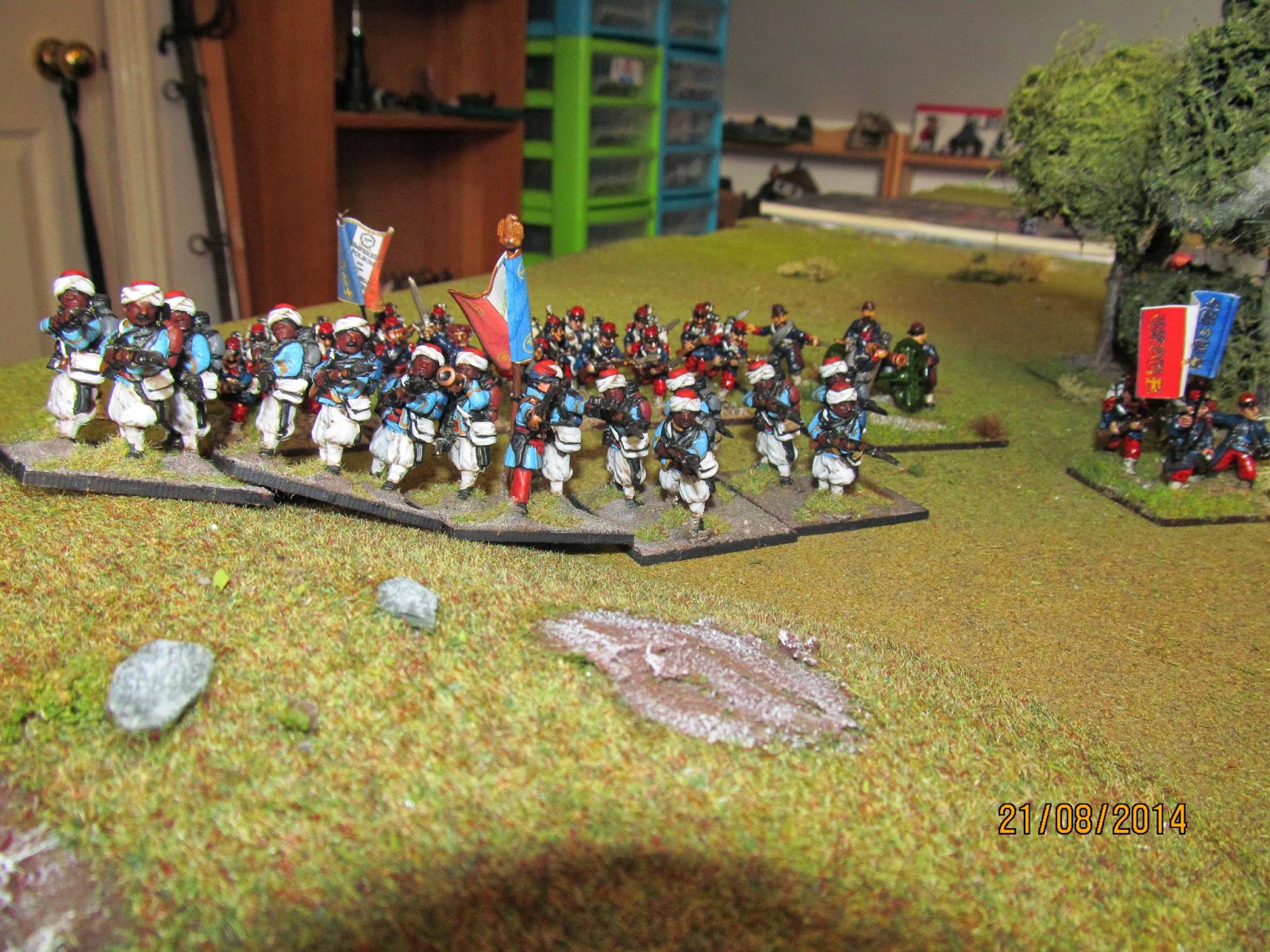 (Above, the French right flank threatening the Prussian assault on the factory while below in the centre the Marine battalion and their supports advance shortly after the French garrison of the village in the centre had been ejected). 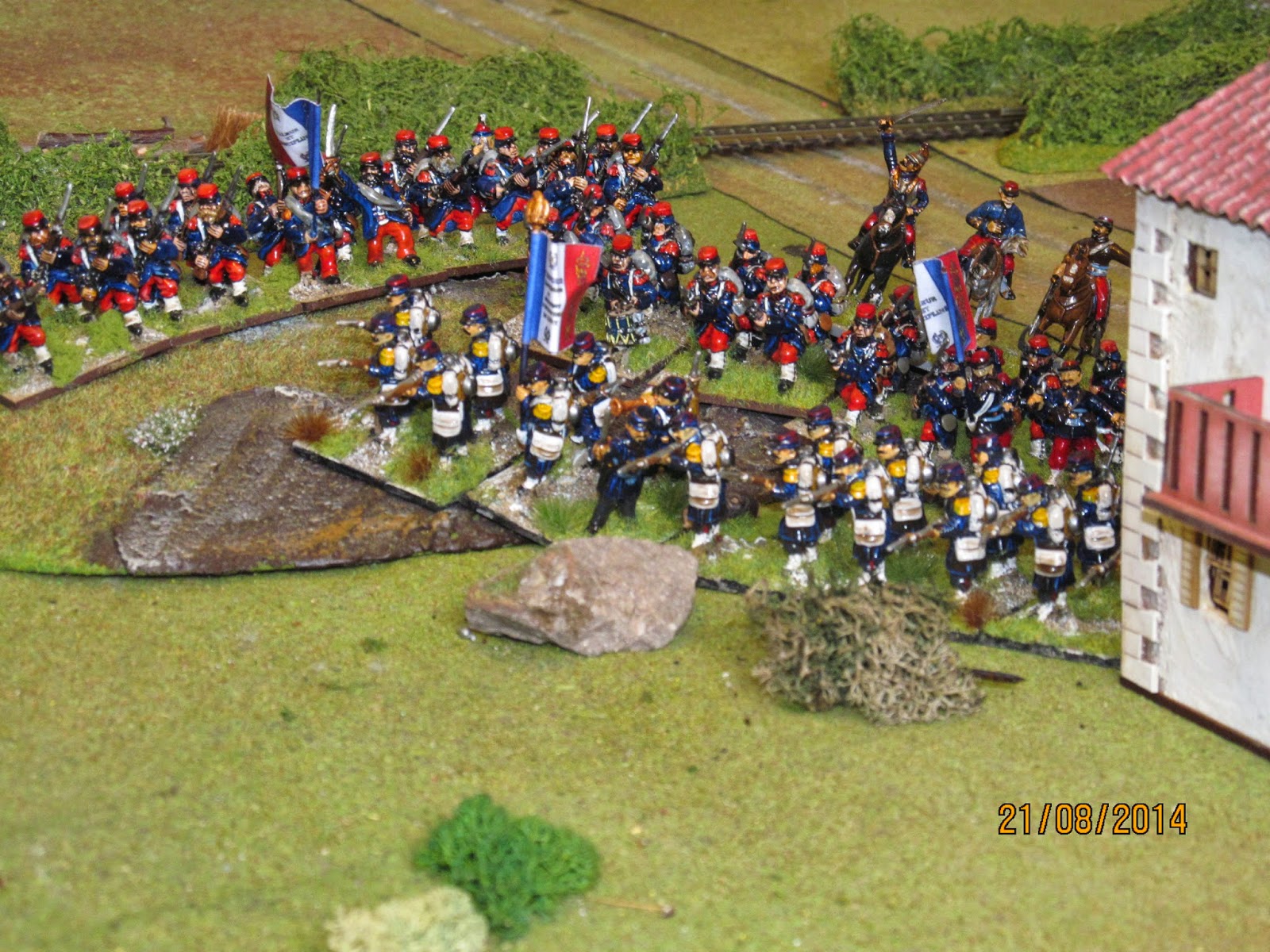 Paul needed to distract me from the attack on the factory and on the village in the centre. Well, he had lots of cavalry to throw at me. Four regiments of Cuirassiers, one of Chasseurs d'Afrique and two of Chasseurs a Cheval is quite enough of a distraction any day of the week. In true Franco-Prussian War tradition he launched them at the Prussian left flank. The Cuirassiers failed to get a good enough command throw so didn't move. The others went straight for a battalion of infantry who in good old Franco-Prussian style stopped them in their tracks and sent the whole brigade reeling back in disorder! It looked great but it didn't work. I'd actually have quite liked to see the Cuirassiers thundering into the flank of my attack on the village, if only for the effect it would have on the overall battle, as I doubt I could have stopped all of them, but it wasn't to be! 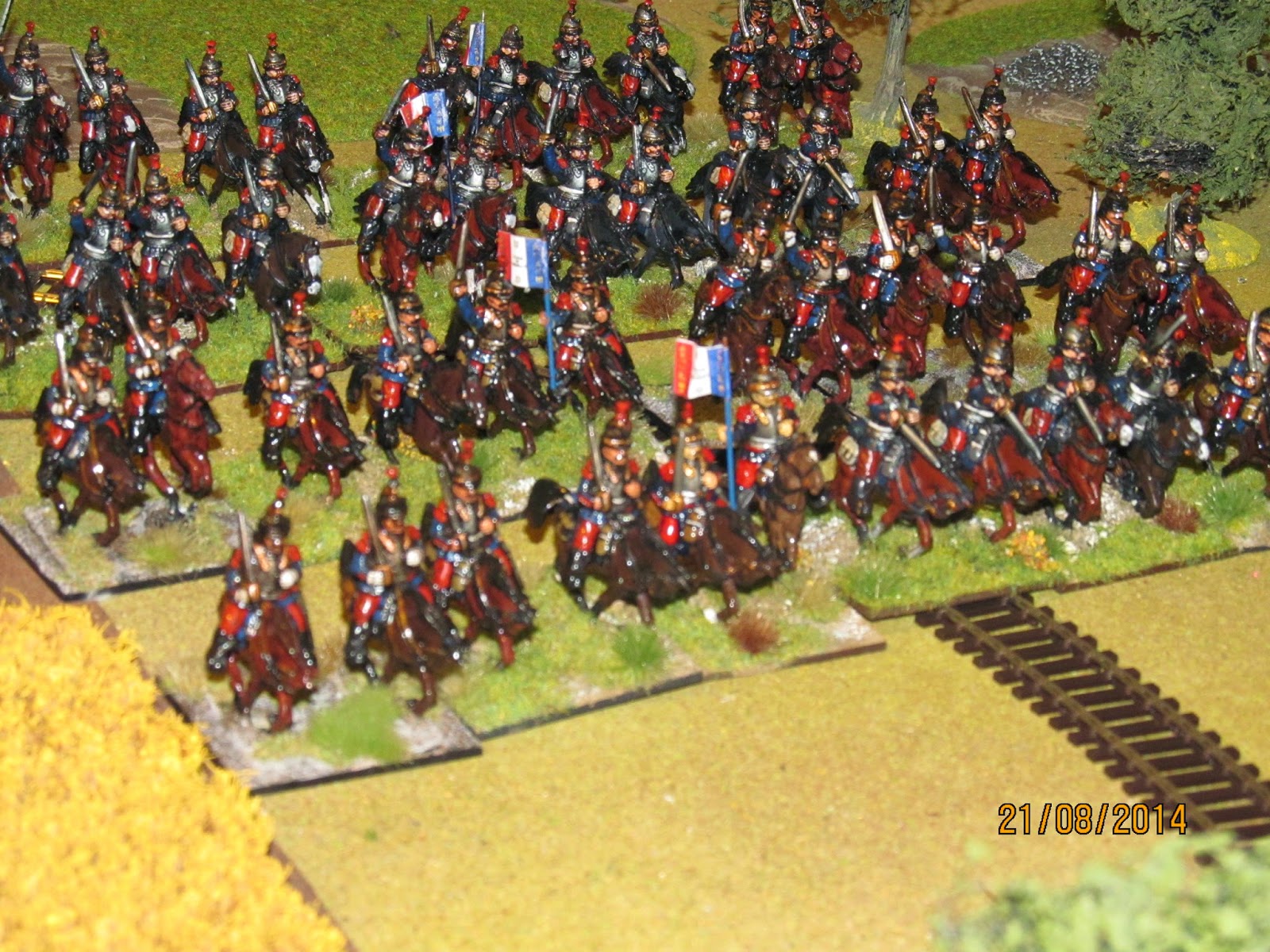 (The French cavalry advances to buy time for the rest of the army to escape. Above, the Cuirassiers failed in their attempt to launch a charge on the Prussian right but below, the Light cavalry division charged the Prussians but were thrown back disordered by short range fire from their intended target!) 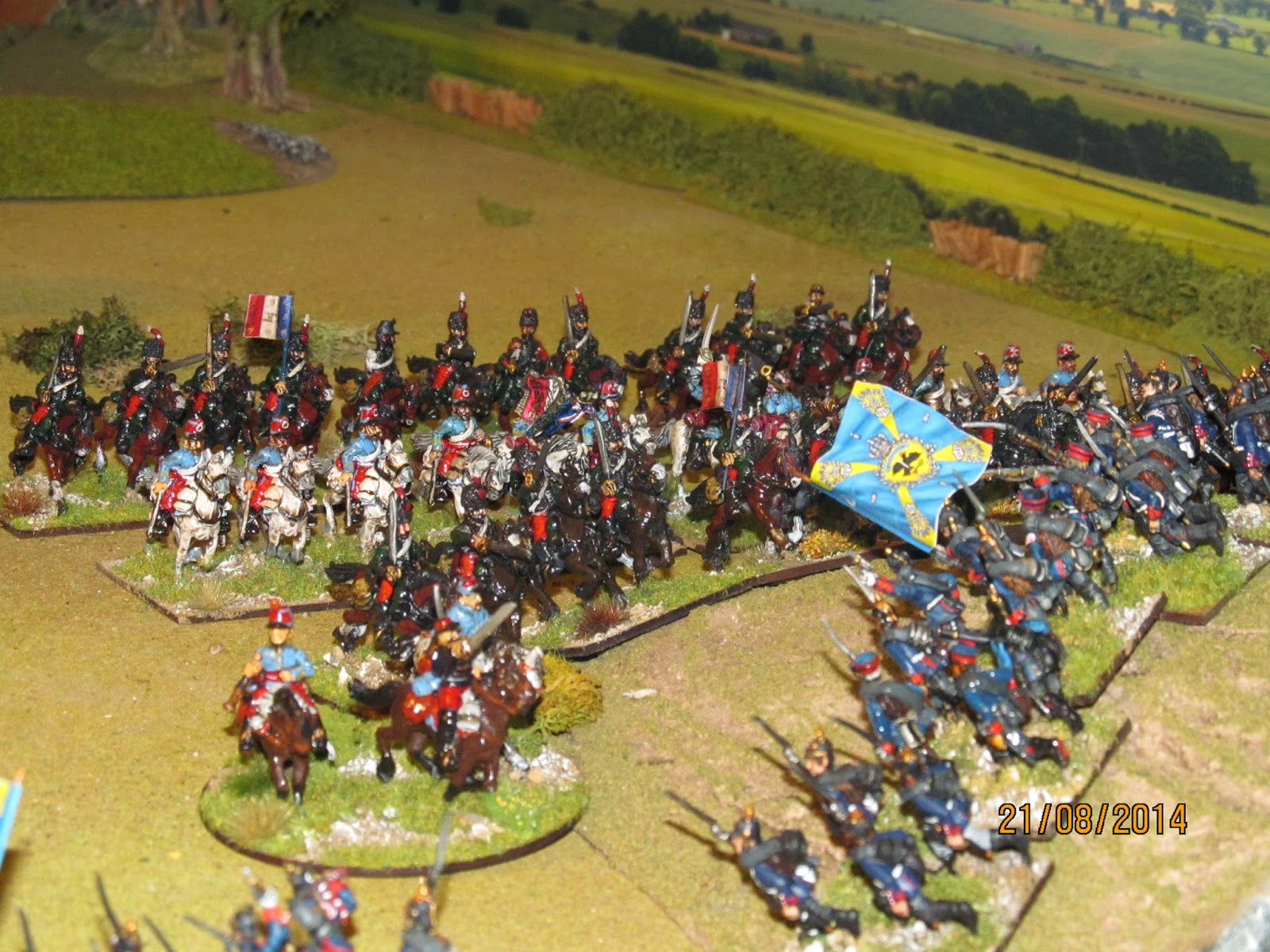 We decided to call it a day at that point. The Prussians had captured the factory and the schrauben-laden wagons, and were in the process of ejecting the remaining French from the village in the centre. Paul had plenty of men left to make an ordered fighting withdrawal so we agreed that his army would probably safely extricate itself from the battlefield even if it meant buying the time to do so with further cavalry charges.

It was a great game and yet again Black Powder proved that they can be used very effectively for this period. All it needs is for the troop types to be accurately reflected by using the special rules, some amendments to the firing ranges and an understanding of the period, as well as good humour and no 'gamey' moves! It played very well.

The Prussians were seriously outshot by the French with their chassepot rifles. I gave the chassepot a 36" range and a short range of 12" rather than 6", against 24" and 6" for the needle guns. Prussian artillery however had a much longer range than the French and was far more effective in the game as a result. I also made the Prussian infantry 'reliable' and 'crack', allowing them a better chance of moving and an extra saving throw while they had no casualties. This certainly made a big difference but in the end once the casualties started mounting up any frontal attack was going to grind to a halt. In fact I have a house rule for 1866 and Franco-Prussian games where a unit receiving two unsaved hits will be classed as pinned down, requiring one move to get up and reform.

So the French lived to fight another day, although we must wait to see if their war effort is seriously undermined by a reduction in their Schrauben production.