This piece follows on from the previous post which described the background to the game and the opposing forces, so now on to battle!

The Russian advance was slowed by poor command rolls which resulted in about half of the army not appearing when required. The Russians had also made their plans based on a very inaccurate and not to scale sketch map drawn by a cossack scout. As a consequence they misjudged the size of the gap between the town and the woods on their right and were unaware of the presence of the sunken road in the centre (marked by the double hedge line). Visibility was also reduced for a couple of moves due to early morning mist.

The Russian artillery was slow to deploy as they were taking fire from the Prussian guns and unable to return fore as they were masked by their own troops manoeuvring to their front. Nevertheless the Russians soon had three brigades or infantry (12 btns) marching towards the Prussians. John decided to take the fight to the Russians on the left and effectively stalled the Russian advance for the remainder of the game. The Russians couldn't compete with the superior Prussian fire discipline and should have tried to drive them off with the bayonet rather than shooting it out with them. 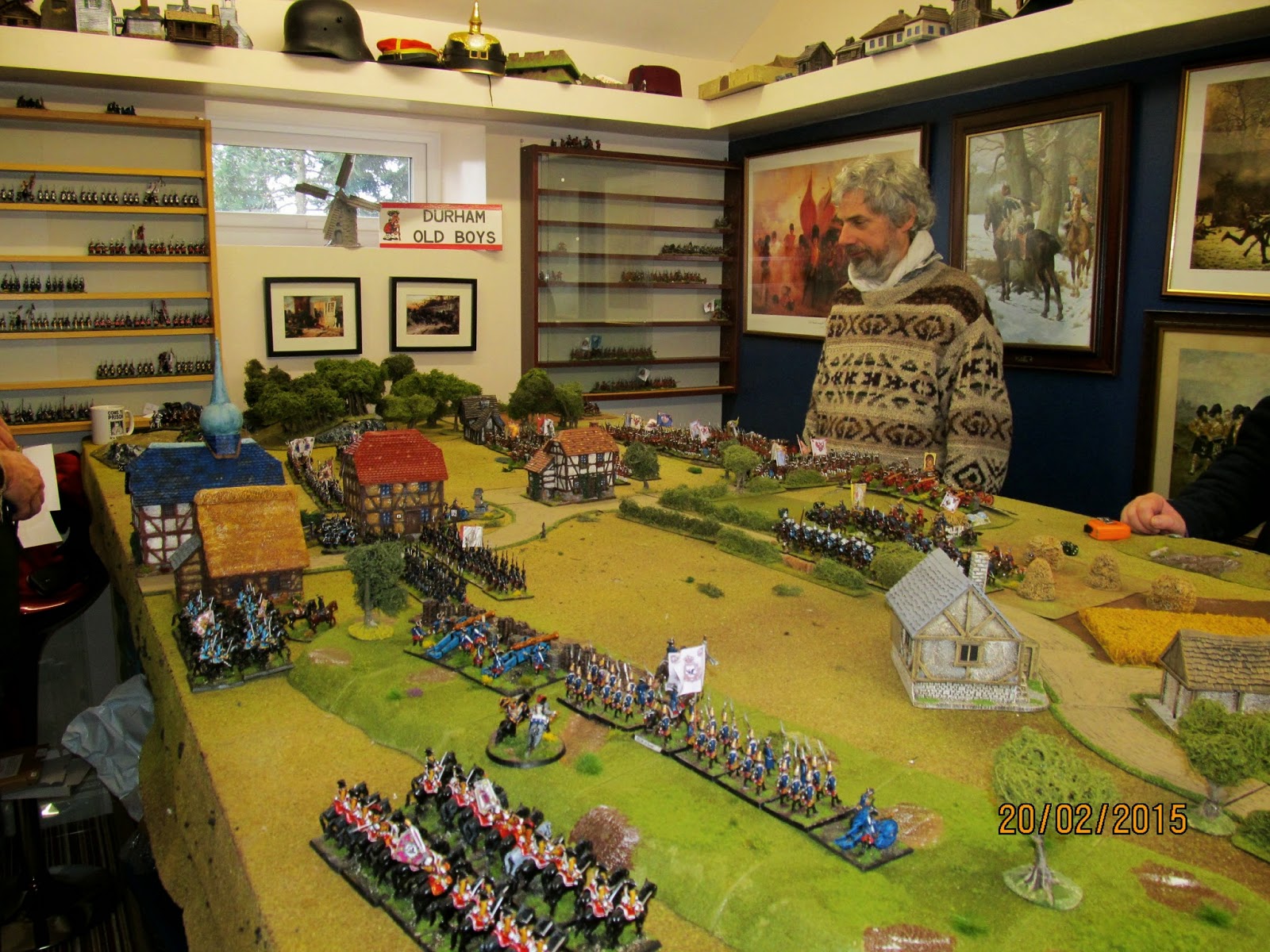 Conrad looks on as the Russians make their (slow) entry onto the table.....well some of them! 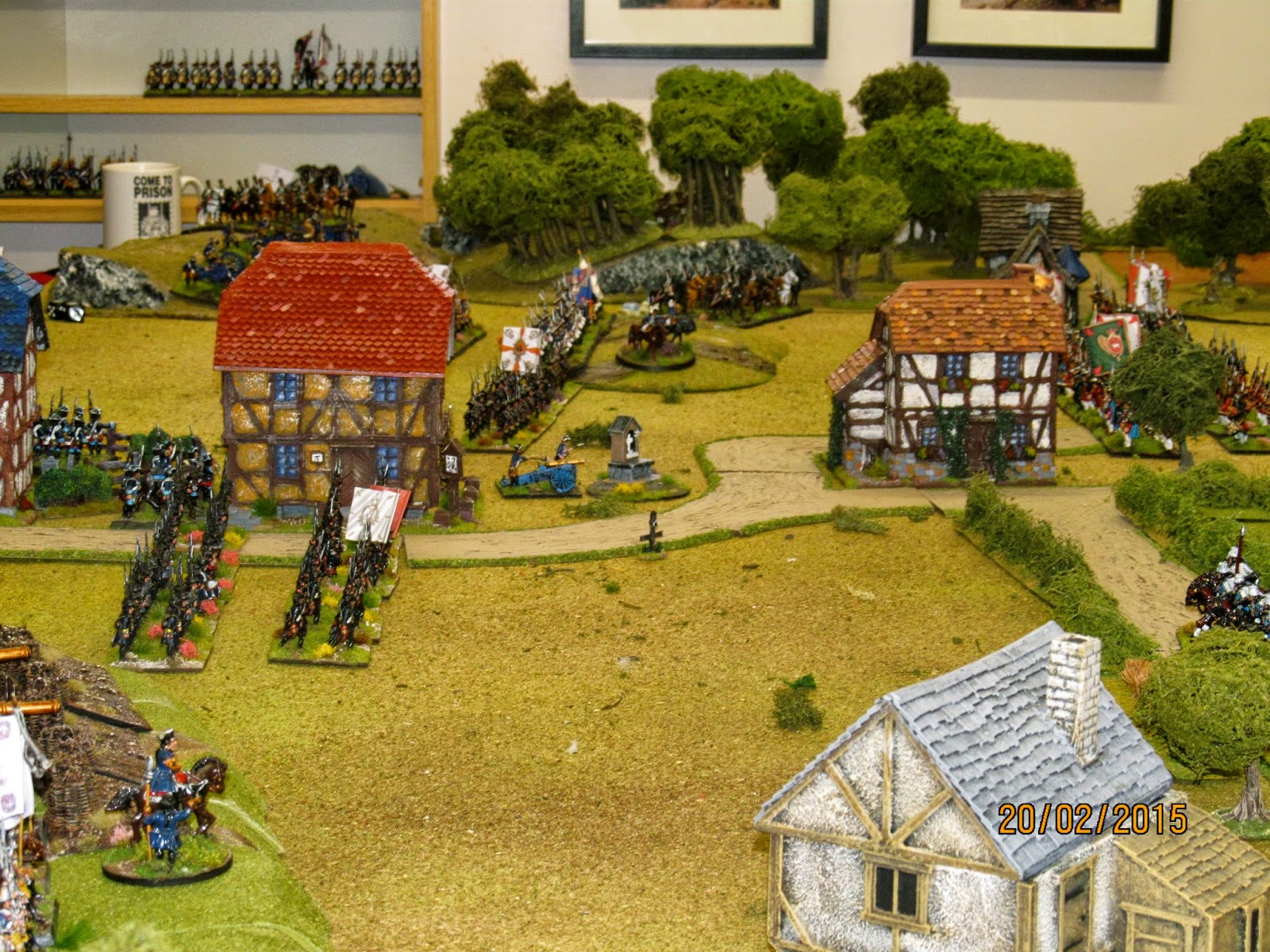 The Prussian left flank in the distance led by John gamble and advance on the Russians. These were the best of the Prussian army as almost all the other infantry were Freikorps, Militia, Garrison infantry or recruits, 'stiffened' by a fusilier and grenadier btn. 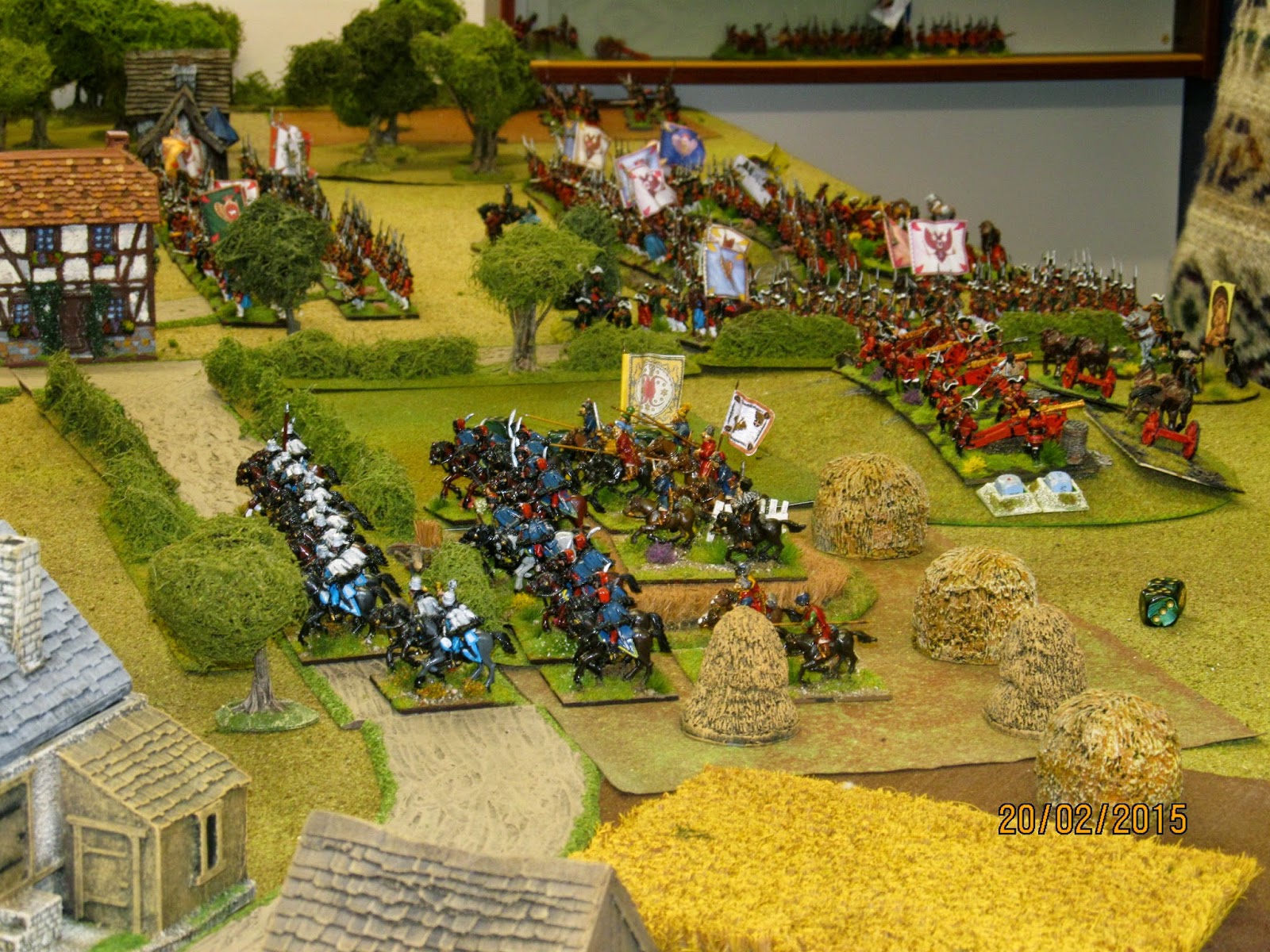 Clive's hussars and cossacks reach the sunken road while his artillery tries to deploy on the hill top while under fire from the Prussians. 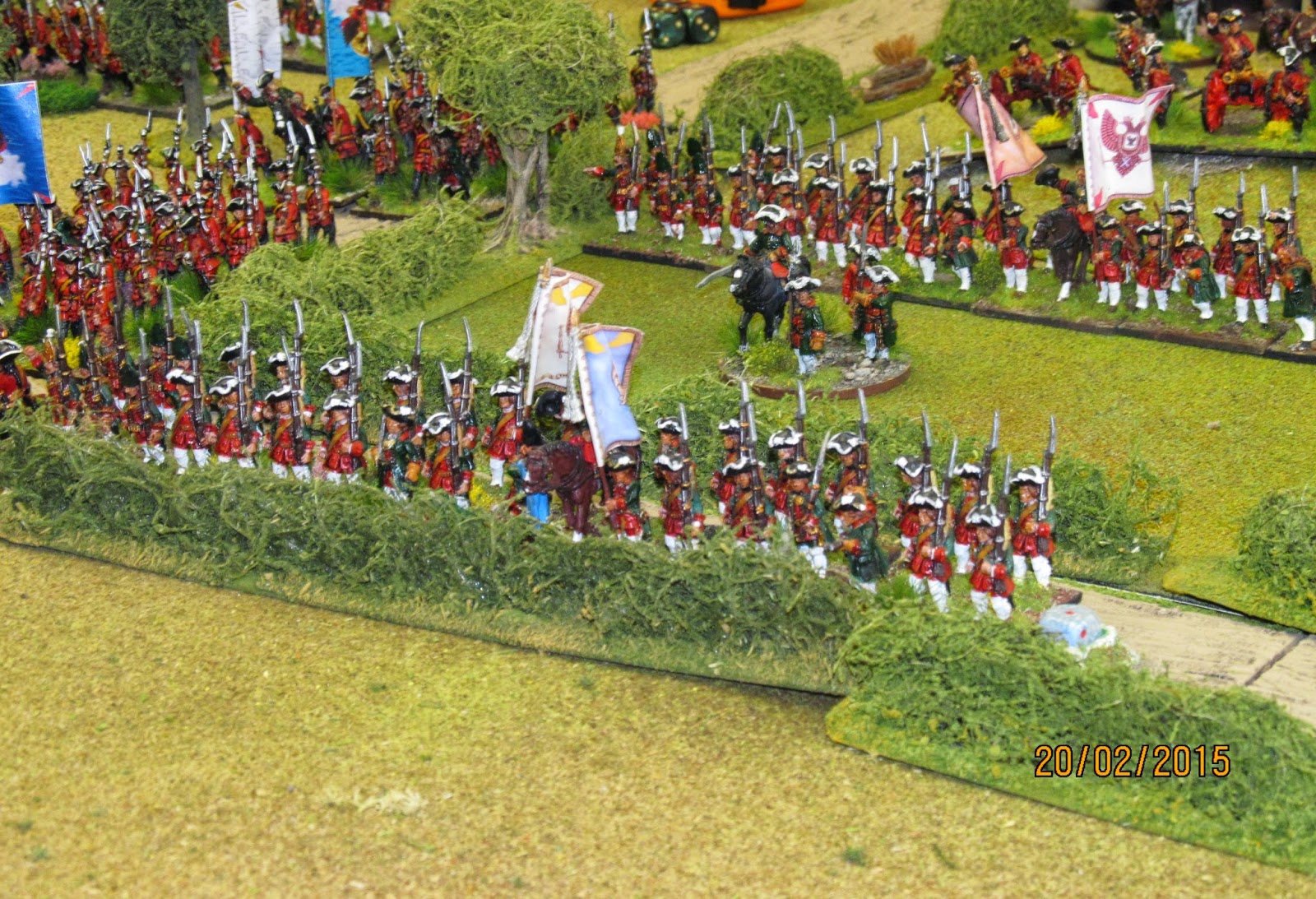 The Russian centre, anchored on the sunken road which was quickly filling up with Russian casualties. 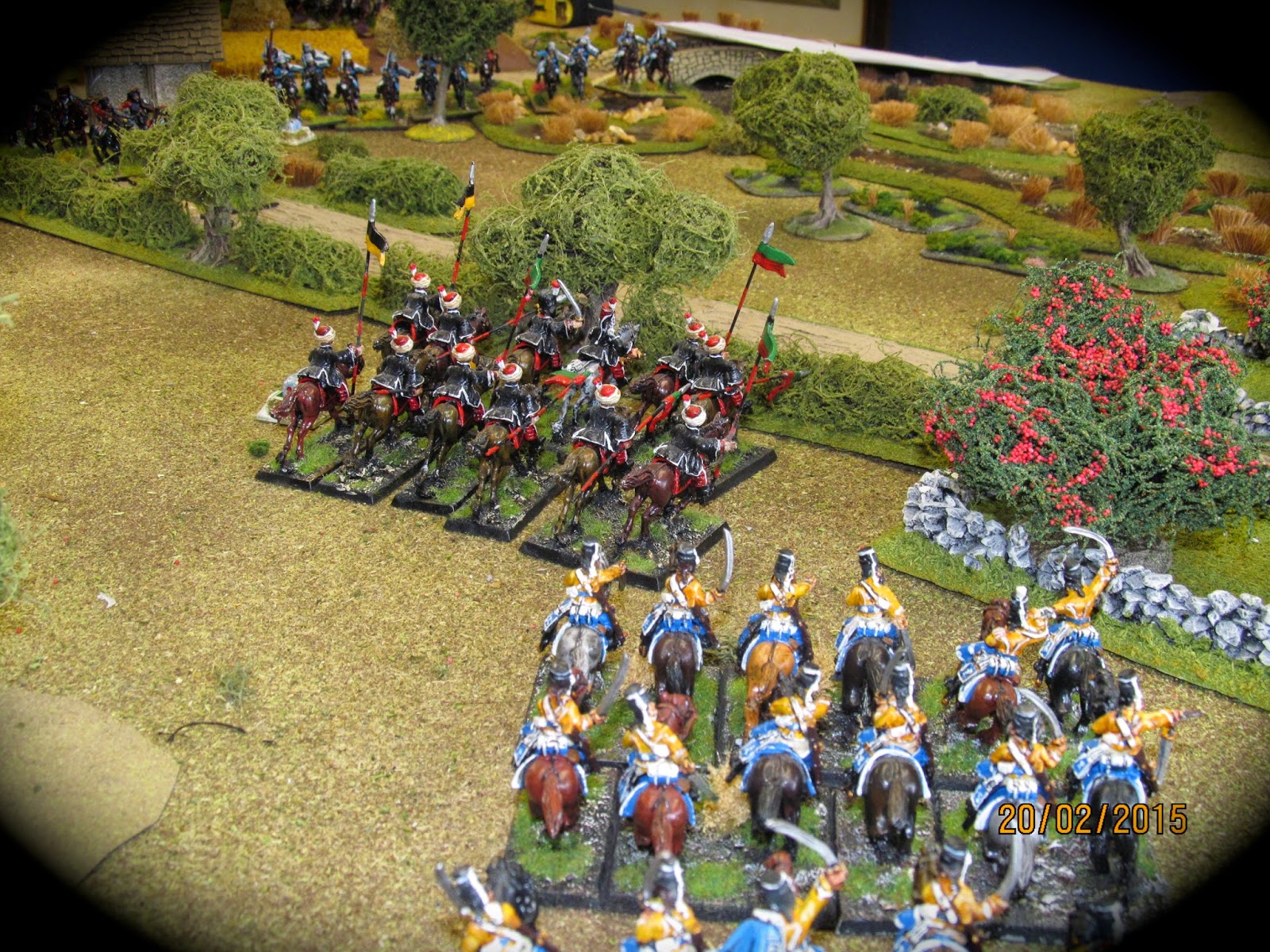 Bosnaiks and the 7th Malachowski hussars recovering after seeing off the Russian hussars seen pulling back in the distance, shaken and out of the battle. 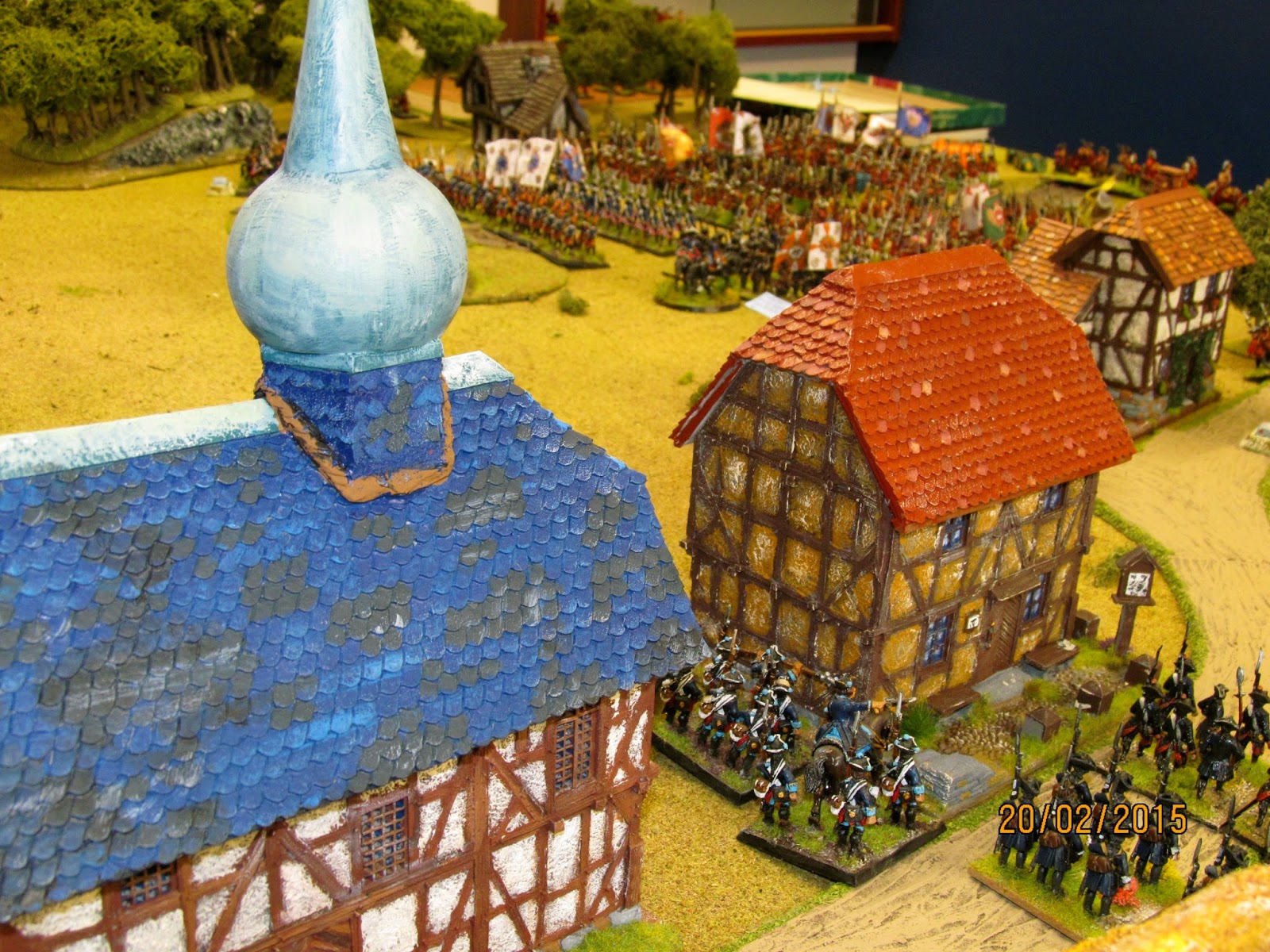 My new church. The village was held by a Freibattalion and a battalion of East Prussian Land Militia. 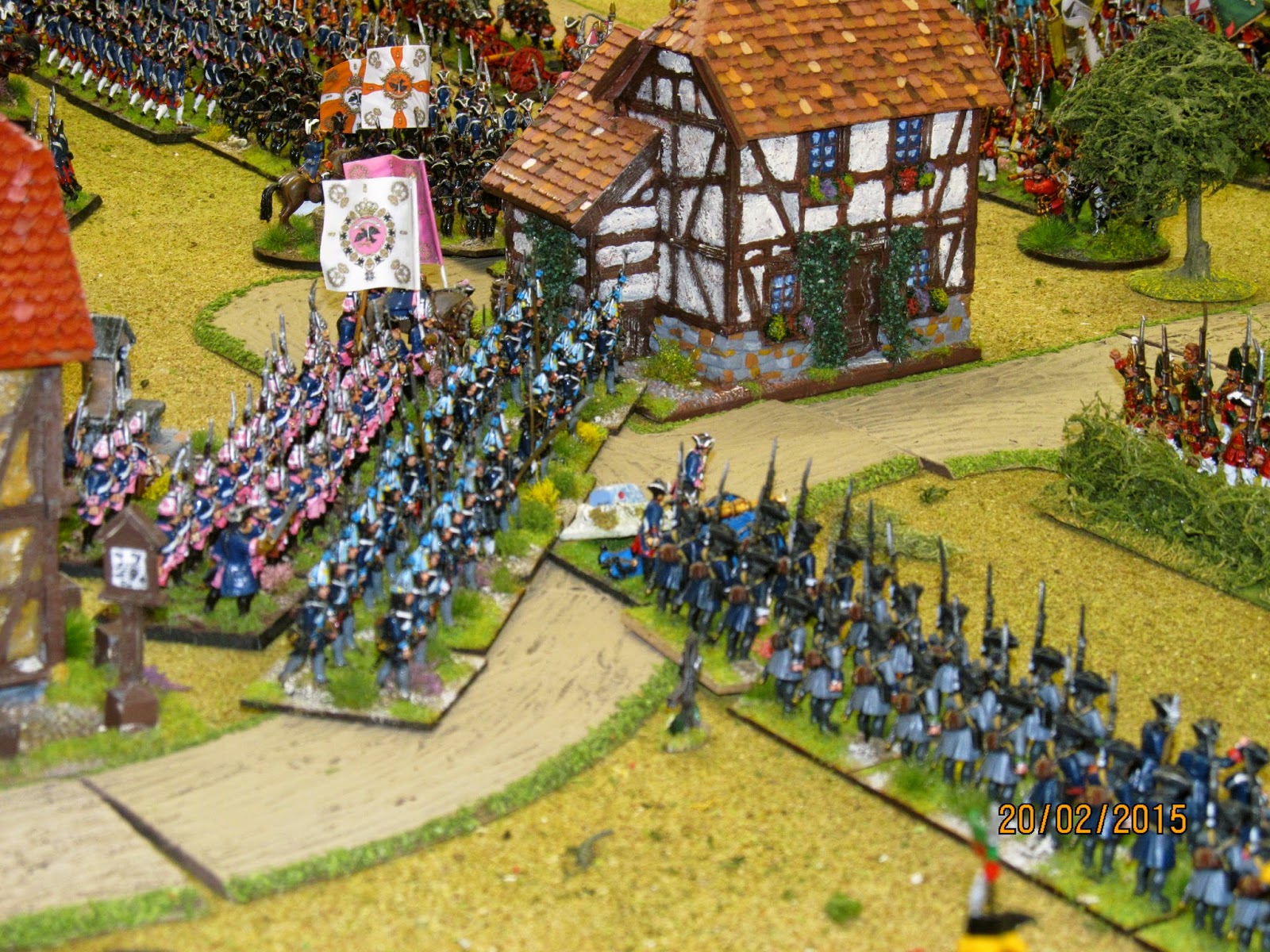 The East Prussian Land Militia advance, supported by the Frei-Grenadier btn von Wussow and the fusiliers of IR40 von Kraytzen. 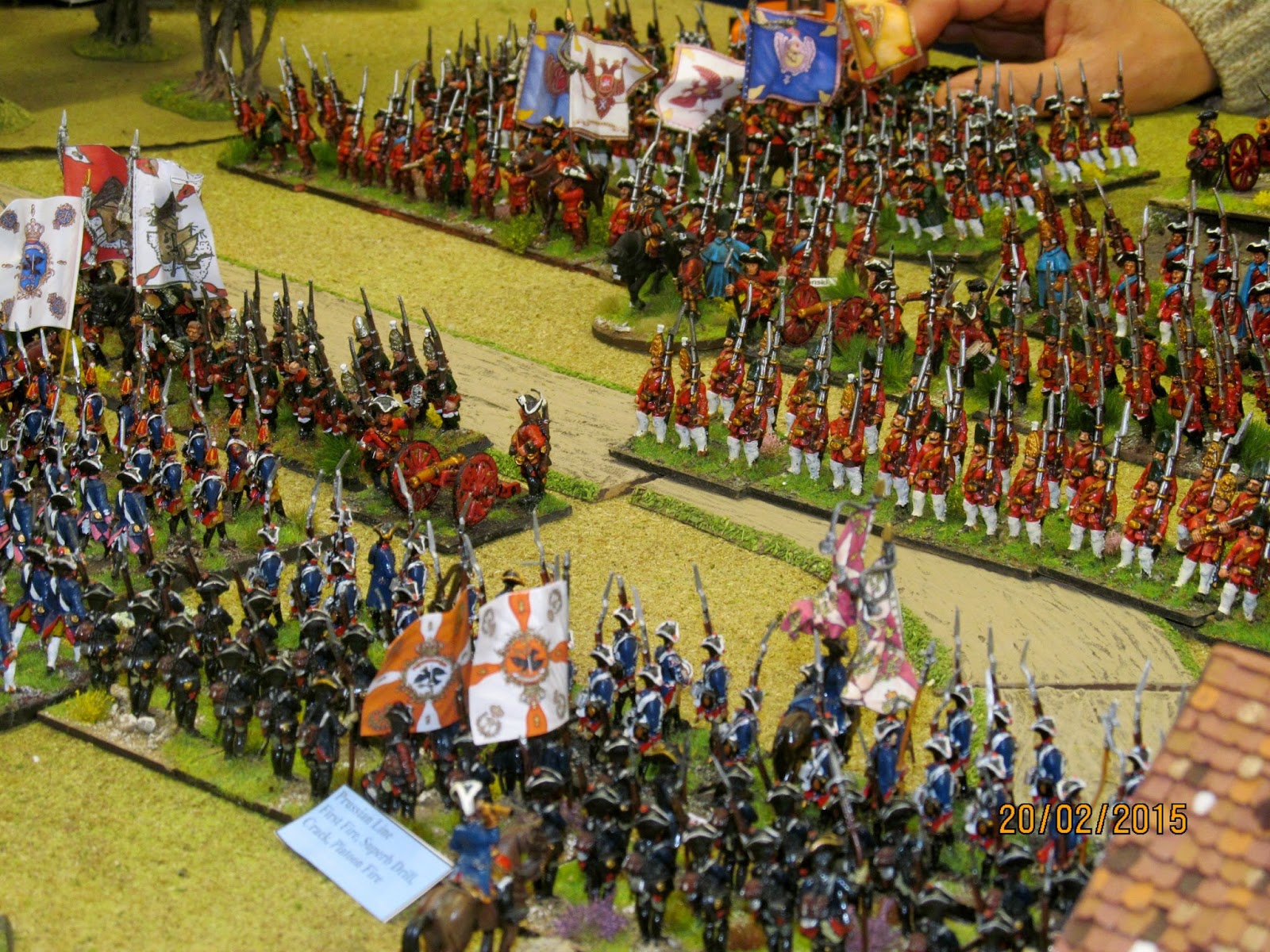 The Prussian left, outnumbered 2:1 and under constant fire from a battery of three Russian howitzers, hold back the advancing Russians, just. 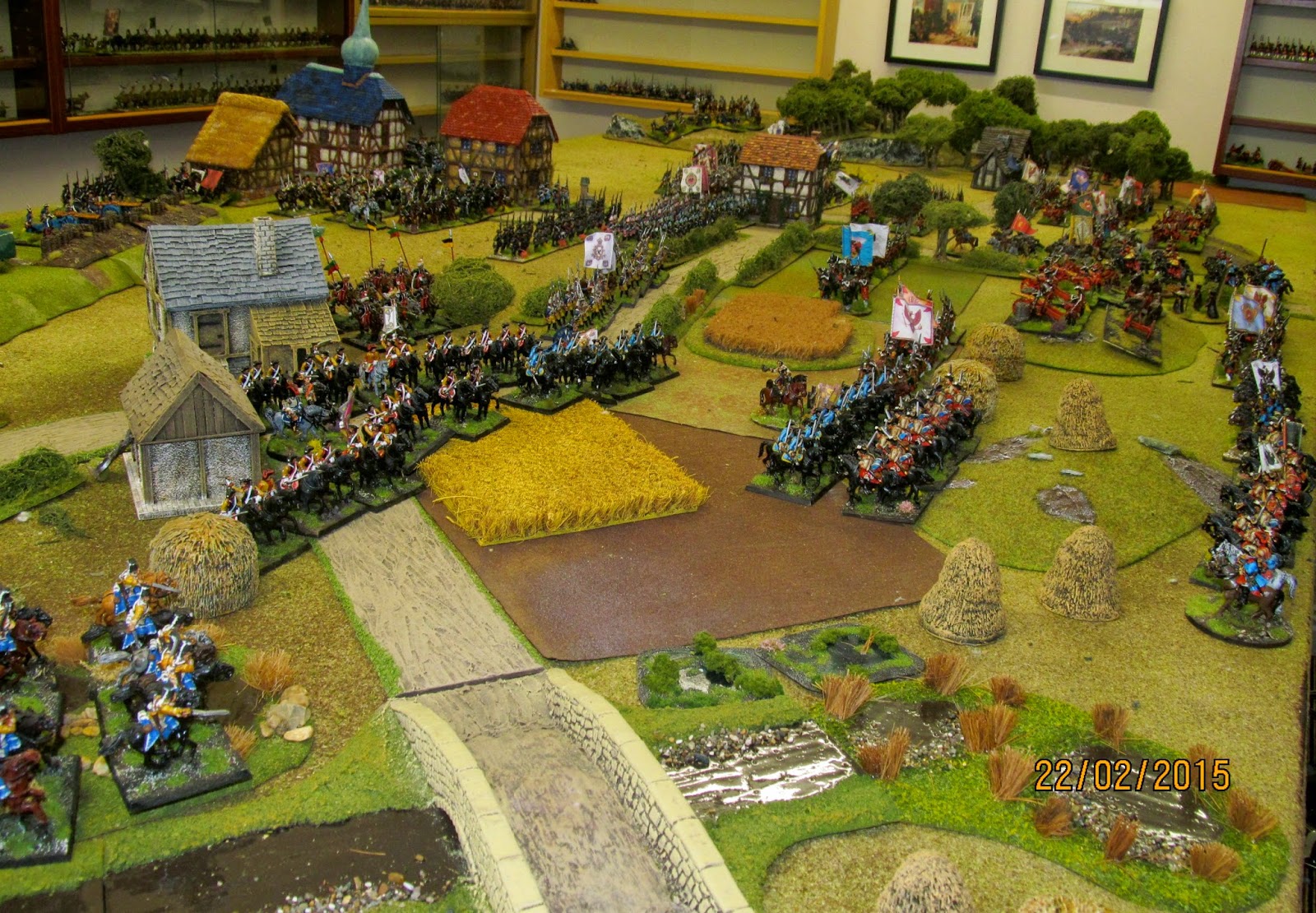 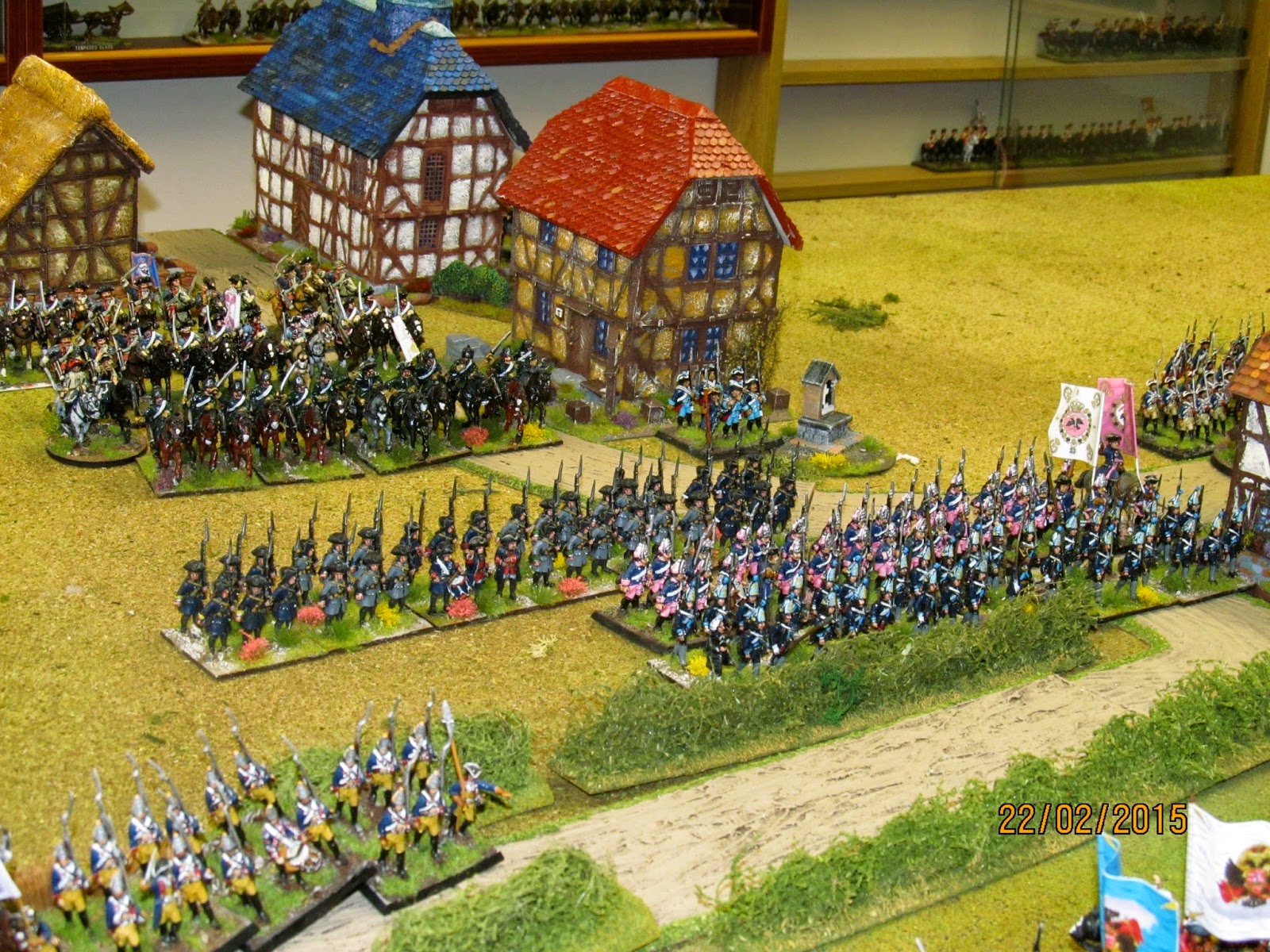 The Prussian centre advances following the collapse of the Russians holding the sunken road. 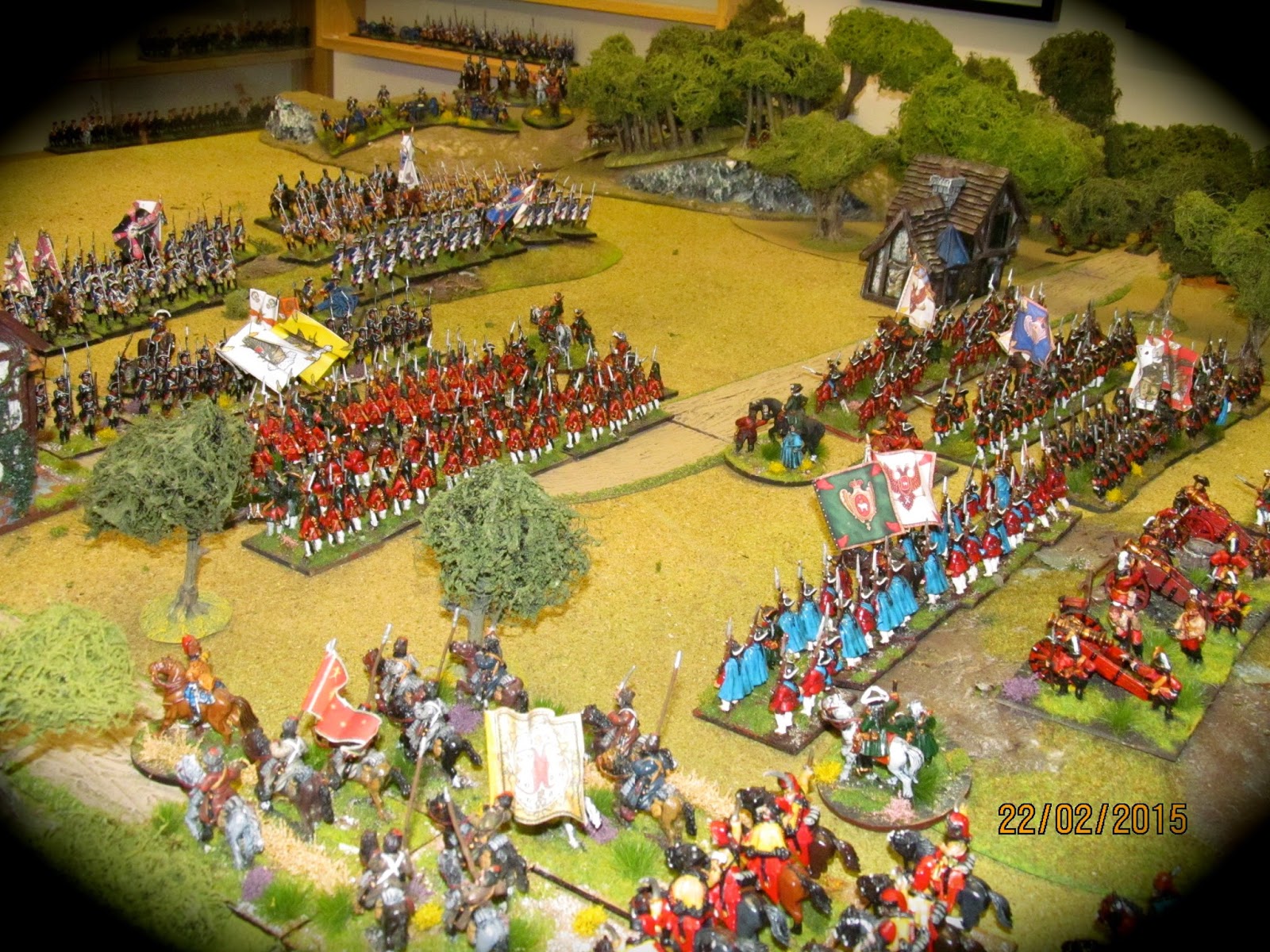 The Russian right flank faltering under pressure from the Prussians. In the foreground the last remaining Russian cavalry, hussars and cossacks, who would play no part in the battle but would undoubtedly be effective in screening the Russian withdrawal. 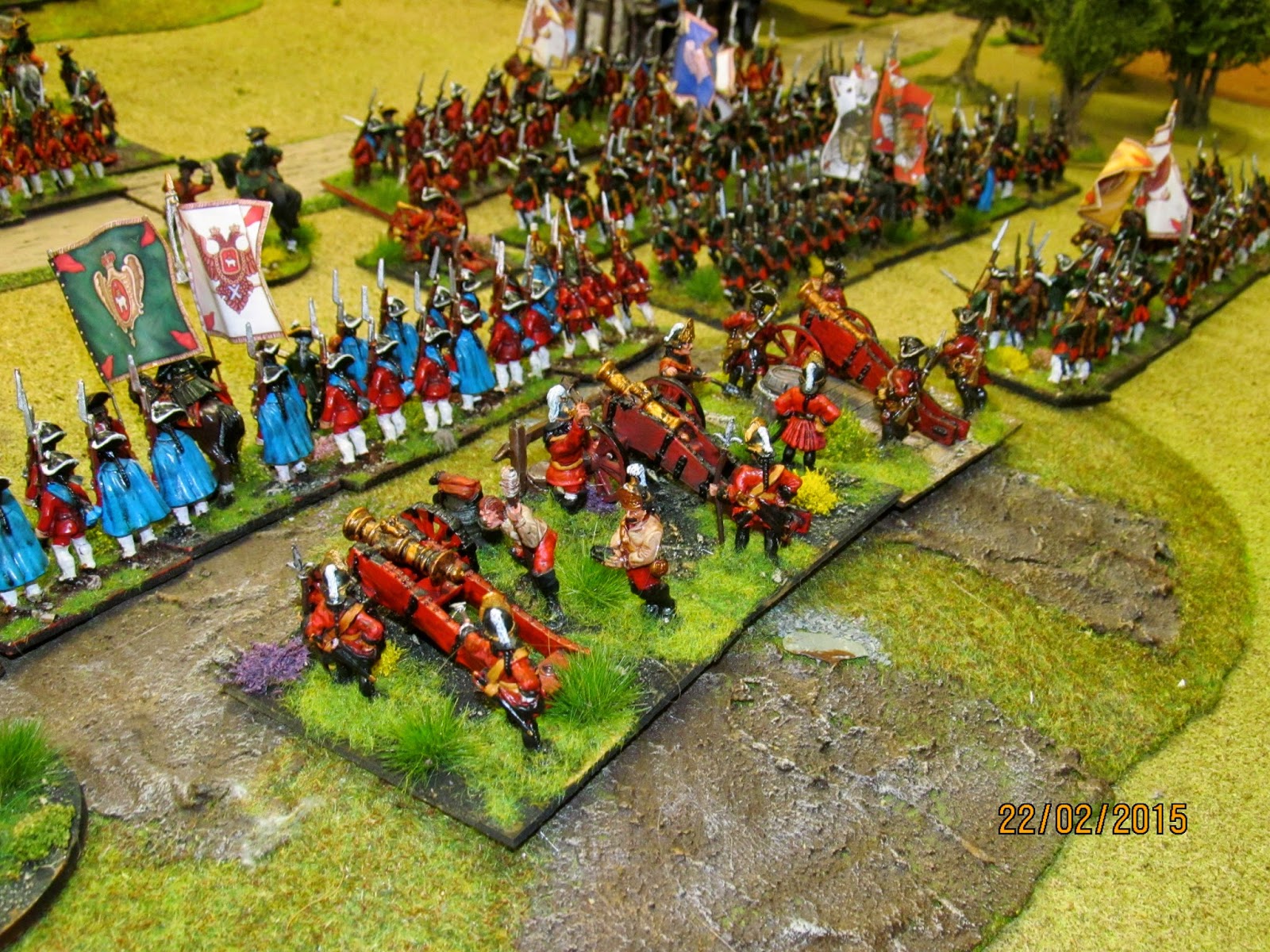 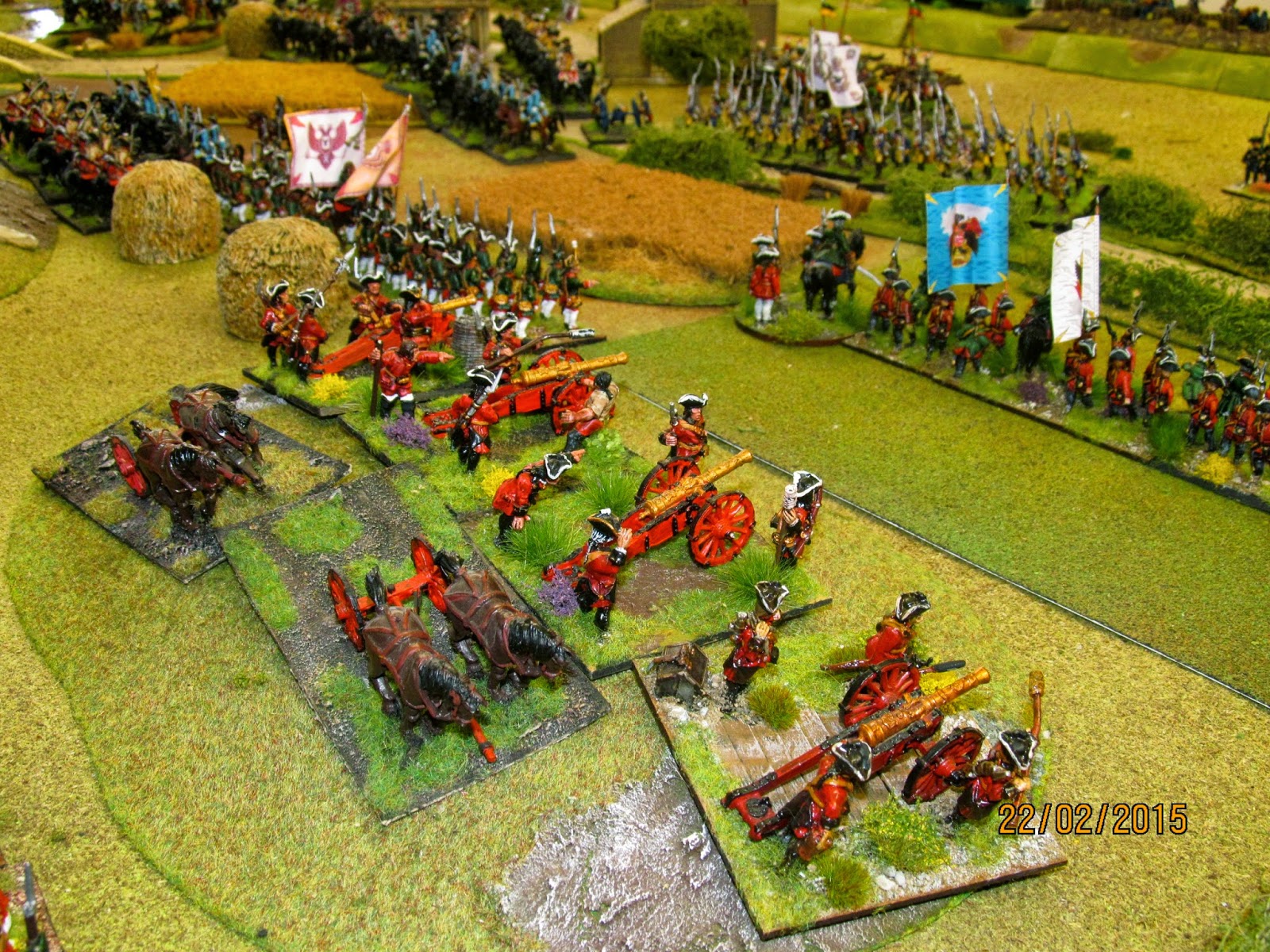 The rather less effective Russian guns in the centre...... 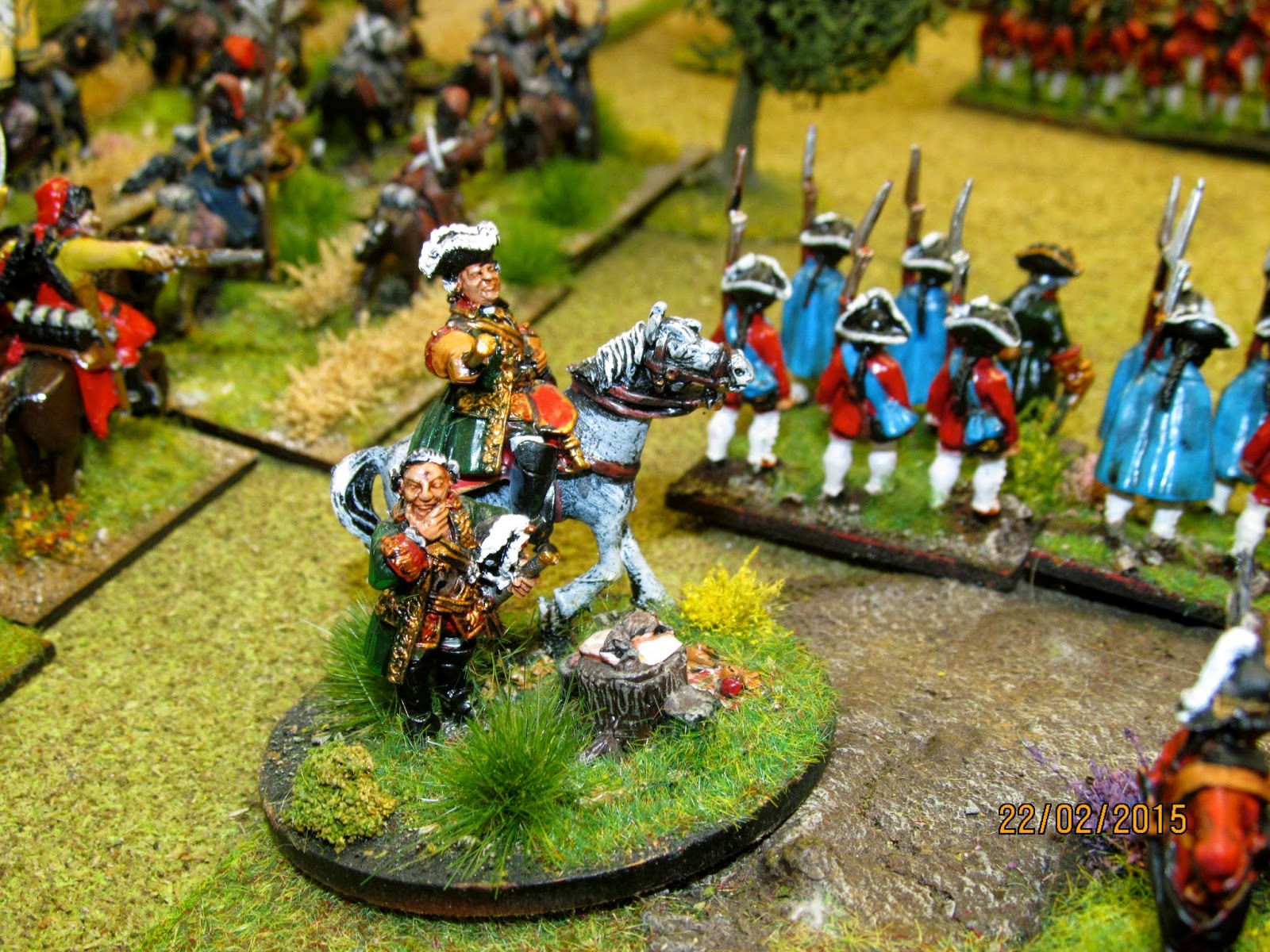 Field Marshal Cairns muses over the progress of the battle while finishing his picnic lunch.....will there be time for pudding? 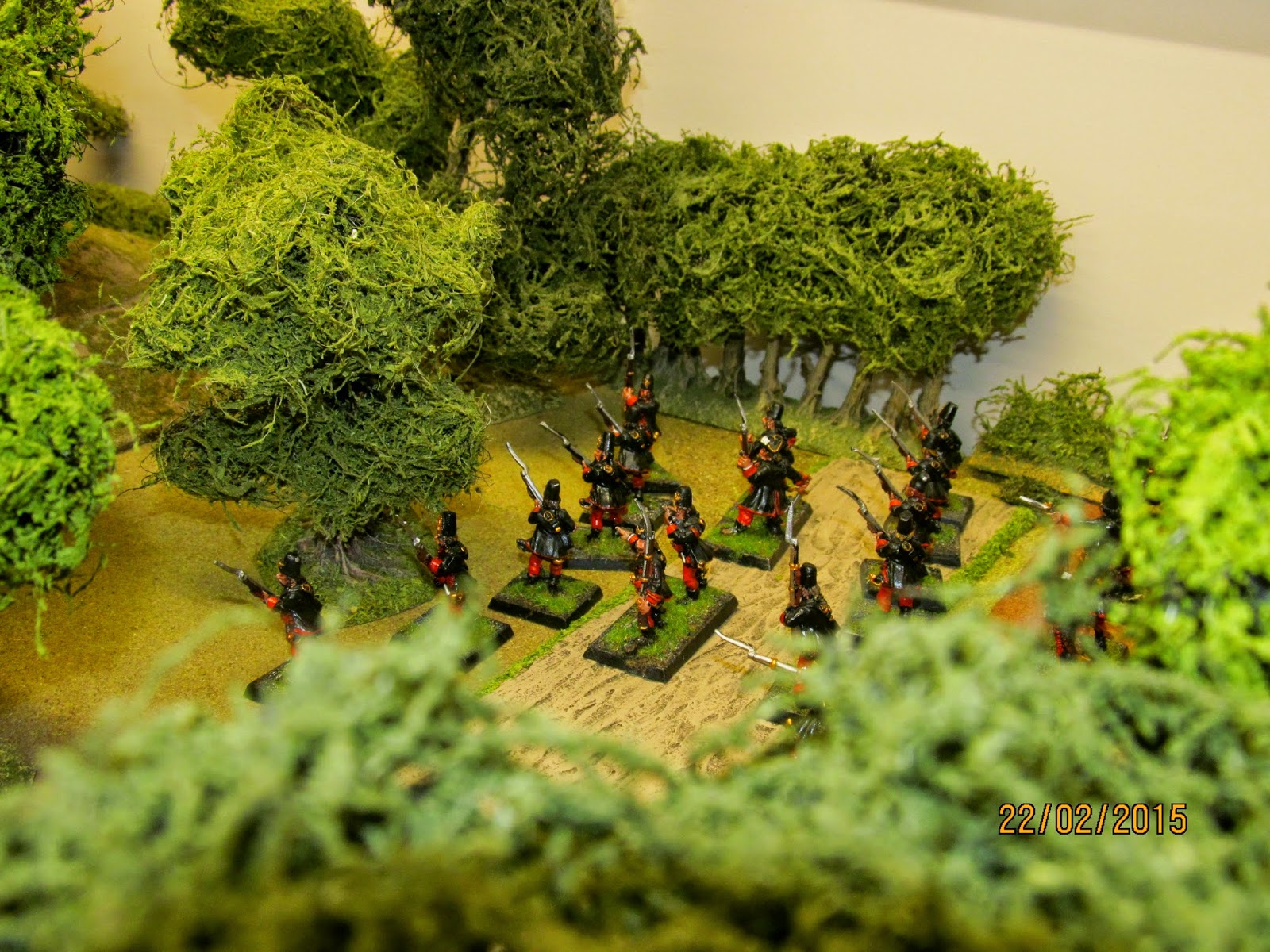 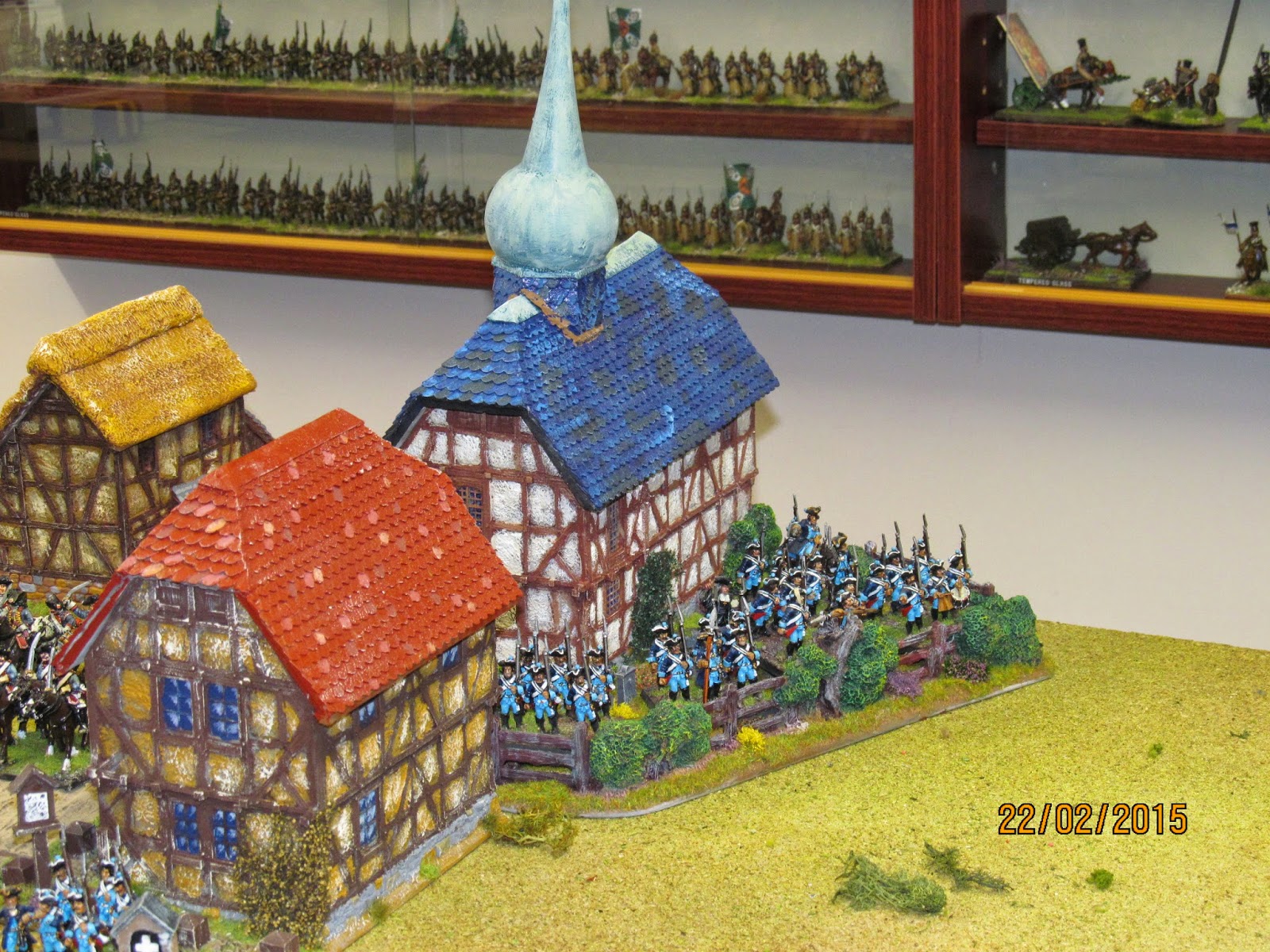 Frei Battalion du Verger held the village throughout the battle, and were very happy to remain their safe behind the church walls.

While both sides shot great lumps off each other on the Prussian left, in the centre Clive moved his infantry up to the sunken road. The Prussians countered by advancing a battalion of grenadiers and one of garrison troops to engage them, supported by guns on the hill. The garrison battalion broke under pressure but the Russians were being hit hard. Then Clive threw a blunder and one battalion advanced straight ahead into a hail of musketry and canister fire. The unit broke and with more than half of the units in the brigade now broken or shaken Clive had to withdraw the survivors.

Meanwhile, Clive's hussars had decided to swing right across the front of the Prussian position and were hit in the flank by musketry and cannon fire. They were then charged by my Bosniaks and hussars and driven from the field, taking their attendant cossacks  with them.

The Prussians administered a coup de grace with their cuirassiers and dragoons who were able to manoeuvre through and around the hamlet in the centre following the withdrawal under fire of the Russian heavy cavalry. The 'Norman' dragoons and the 'Prinz von Preussen' cuirassiers crashed into the Russian horse grenadiers and cuirassiers, pushing them back to the table edge shaken and out of the battle.

At this point the Russians threw in the towel as they had two cavalry brigades and two infantry brigades broken (Conrad had lost one in the prolonged fire fight with John's Prussians). There was no way they were going to occupy the heights. A Prussian victory!!!

It was a great game and a tough scenario. What a super way to spend a Friday! I think everyone enjoyed the game, but I remain very puzzled as to why the Russians chose the weakest of the forces choices available to them. They could certainly have done with some more cuirassiers and horse grenadiers.
By Colin Ashton - February 27, 2015