The Battle of Lobositz refought: Defeat snatched from the jaws of victory!

Rob and John came up on Saturday for this game. I also invited Grimsby war gamer Paul Robinson up for the day. Rob supplied the Austrians and we used my Prussians. The game was set up pretty much straight out of Charles Grant's Wargaming in History volume 9, with the terrain juggled to fit my 12' x 5' table (basically the area of the battlefield on the left of the map where the Prussians would enter and deploy was chopped off, so the Homolka mound was about a foot from their baseline). 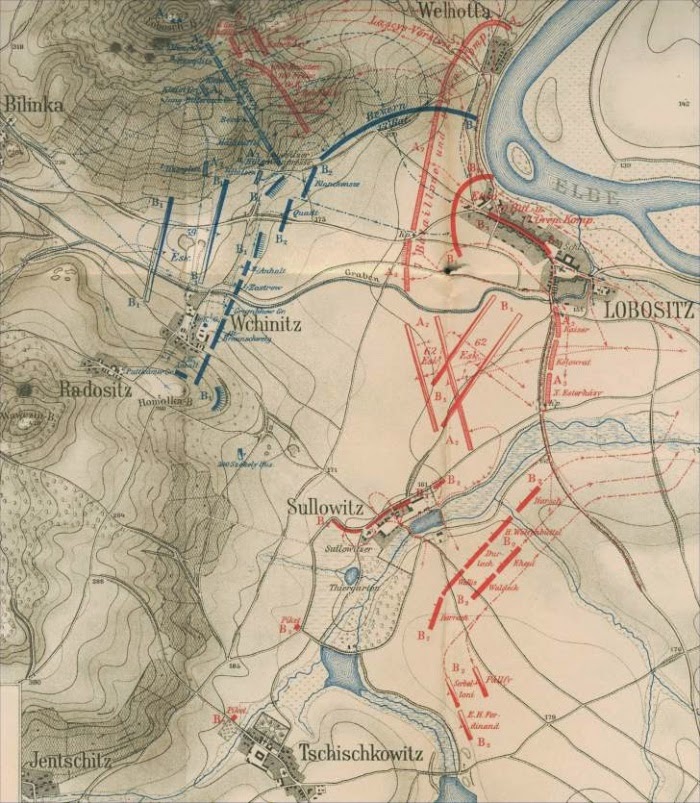 The Austrians were deployed in their historical positions, although some units, i.e. those behind the Morrelenbach at Sullowitz or in the sunken road were not placed on the table at the outset due to the morning mist. The presence of the sunken road was also hidden from the Prussians until they were close enough to see it (or read the briefing notes! Doh!). Visibility improved from turn one, but it wasn't until turn four that the plain was clear of mist.

The Prussians started the game with their heavy battery on the Homolka Mound, a squadron of hussars on their right flank and a brigade of infantry just on the table in the 'saddle' between the Homolka Mound and the Lobosch Hill. All other Prussian troops would measure their point of entry from this section of the table edge but could move and deploy either slide of the mound. We used Black Powder with the troop characteristics and amendments  from the Last Argument of Kings supplement. Infantry battalions were 36 figures strong. The Croats were 12 figure units. Cavalry units (squadrons) were 12 (or 15 for the Prussian Panzer Korps, er..... sorry, Cuirassiers) figures.

The Austrians had a slight numerical advantage in infantry but were seriously outgunned by the Prussians when it came to artillery. The Prussian infantry was far superior to the Austrians but as the game was to demonstrate, fast shooting well drilled troops die just as quickly as anyone else when faced by massed artillery and musket fire! But just not quickly enough......

As noted above, Rob provided the Austrians and me the Prussians. The armies were as follows:

Austrian (Me and Rob)

The Prussians started the battle by advancing their lead brigade towards Lobositz, totally ignoring the Croats on the hill on their flank. In fact everyone ignored them! They spent the entire game taking pot shots at the flanks of the passing Prussian infantry, occasionally causing significant casualties and disorder. The lead brigade suffered in this way, as one battalion became shaken and disordered very early in the game. The remaining battalions of this brigade advanced purposefully towards the waiting lines of Austrian infantry and artillery. They stopped to fire, causing some casualties amongst the Austrian grenadiers in the front line but the return fire was devastating, and the brigade became shaken and had to retire to recover. (I allowed shaken brigades to recover where units had not actually broken but were merely shaken and this saved the Prussians so it was obviously a very good idea.......not). Paul marched his second line up to replace the shattered first line. For almost the entire game the Austrians held firm while the Prussians ultimately lost several more battalions, largely to the combined effects of the three-gun battery pounding away at them from quite close range! One Austrian battalion was forced to retire, but another swung round to enfilade the Prussian line which was showing signs of crumbling.

John's cavalry had made an early entrance but a dismal command score left a brigade stuck on the plain in march column. They were screened by another brigade of Cuirassiers  but the combined Carabinier/Horse Grenadier squadrons charged these and broke them. In a sweeping advance they piled into the columns of Cuirassiers and they too were shattered. The Austrian cavalry had to retreat as they were also badly mauled, not helped by being right in front of the Prussian Homolka battery. Ouch! A slight pause for pictures..... 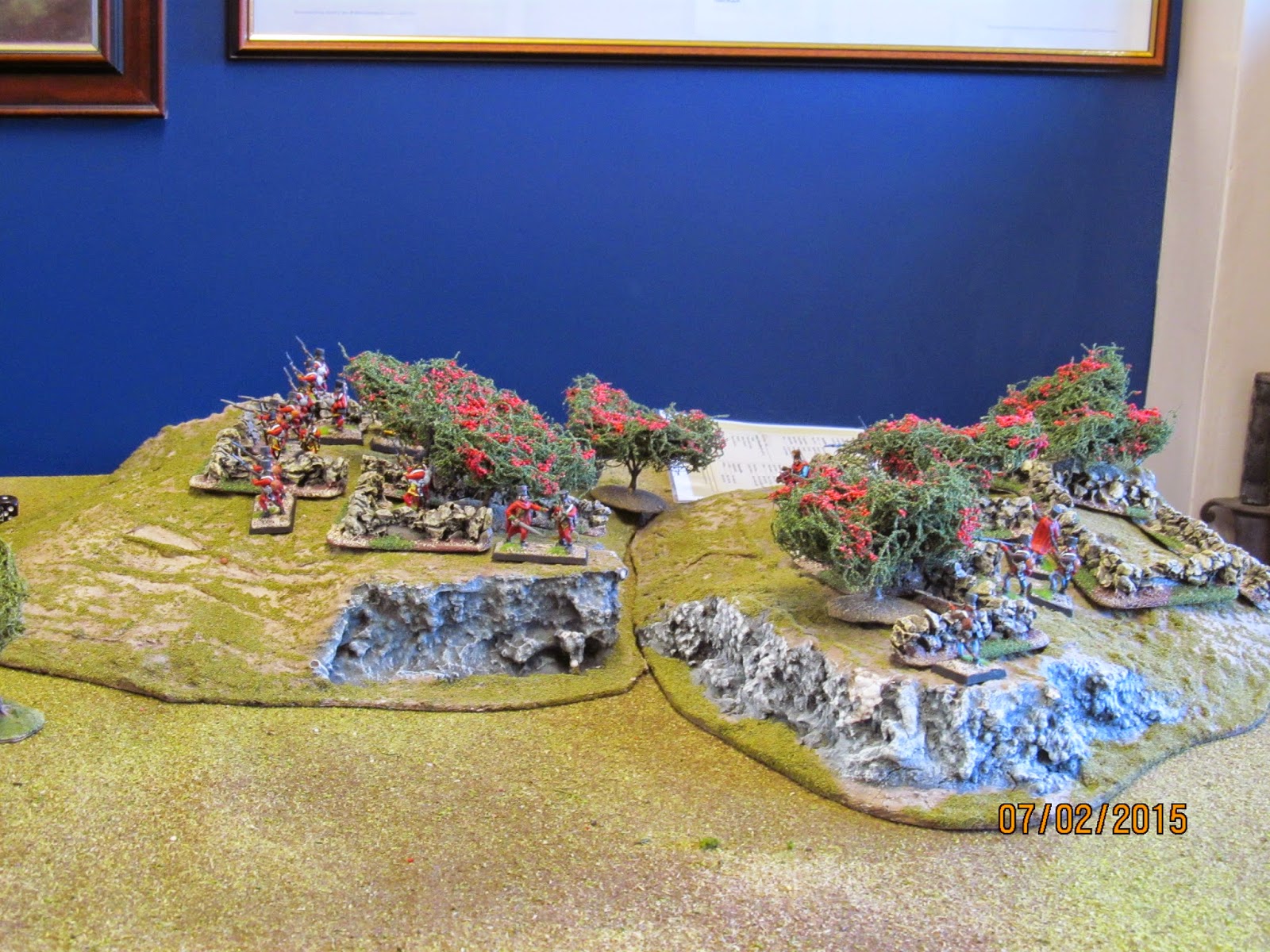 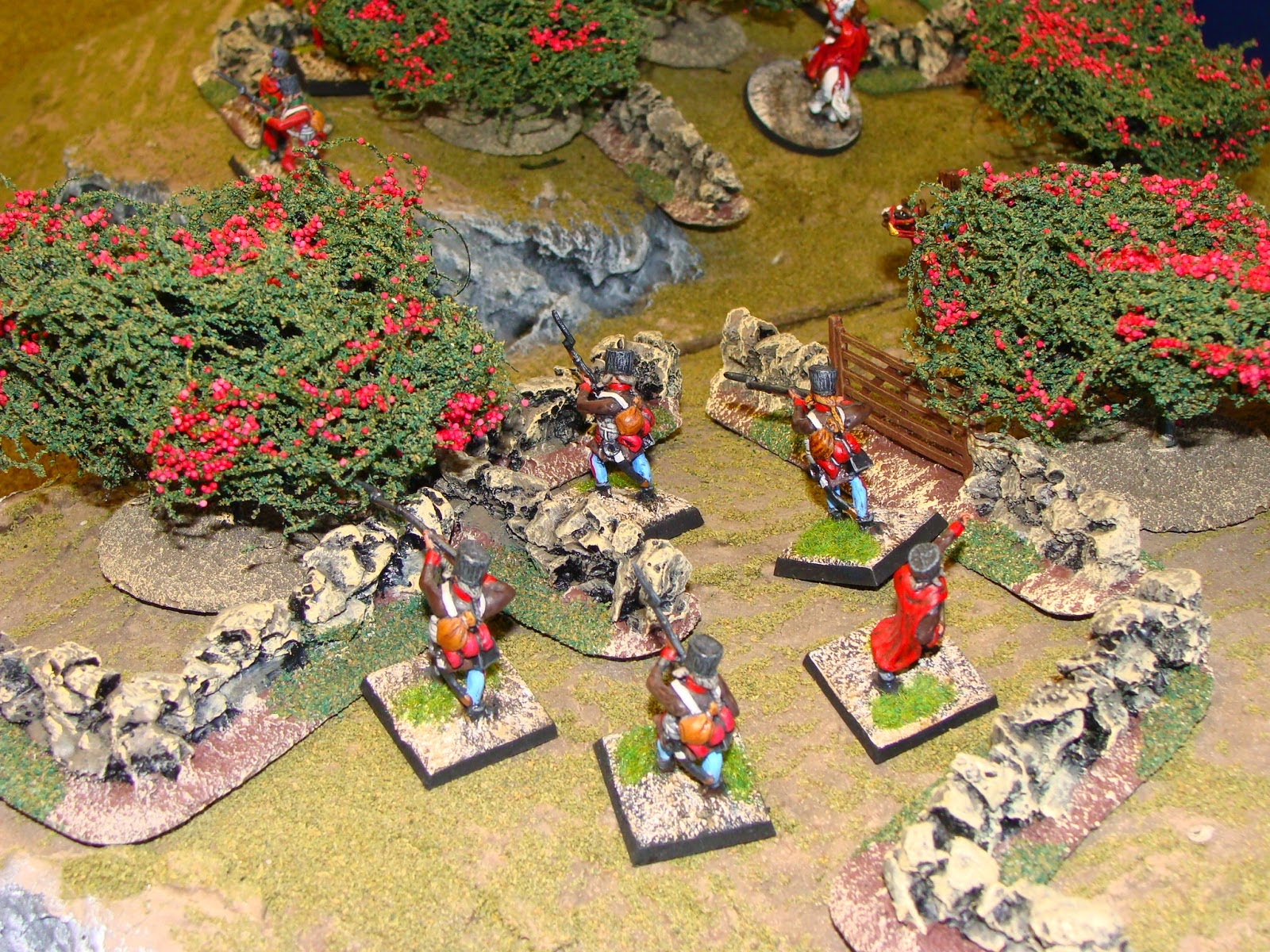 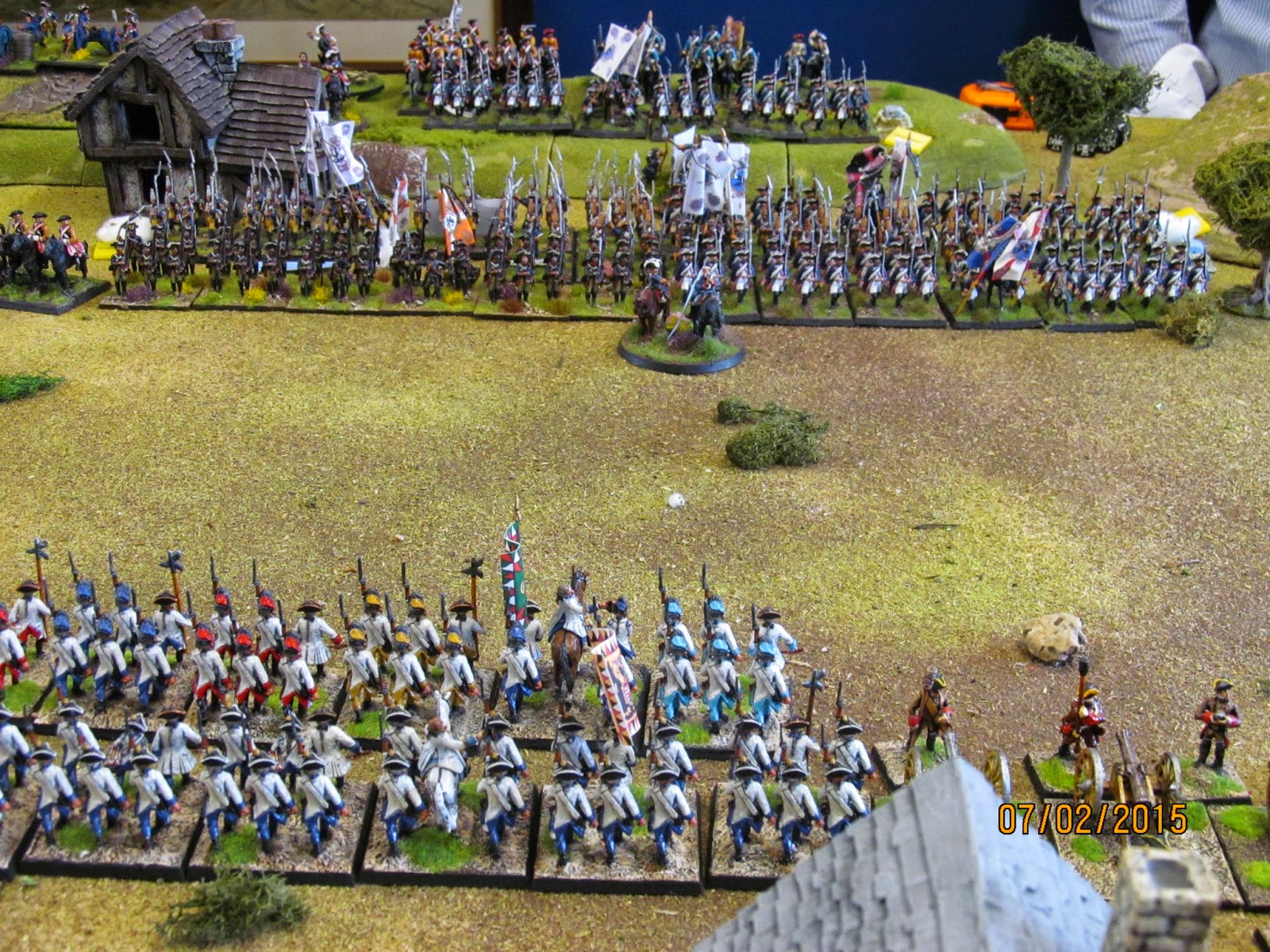 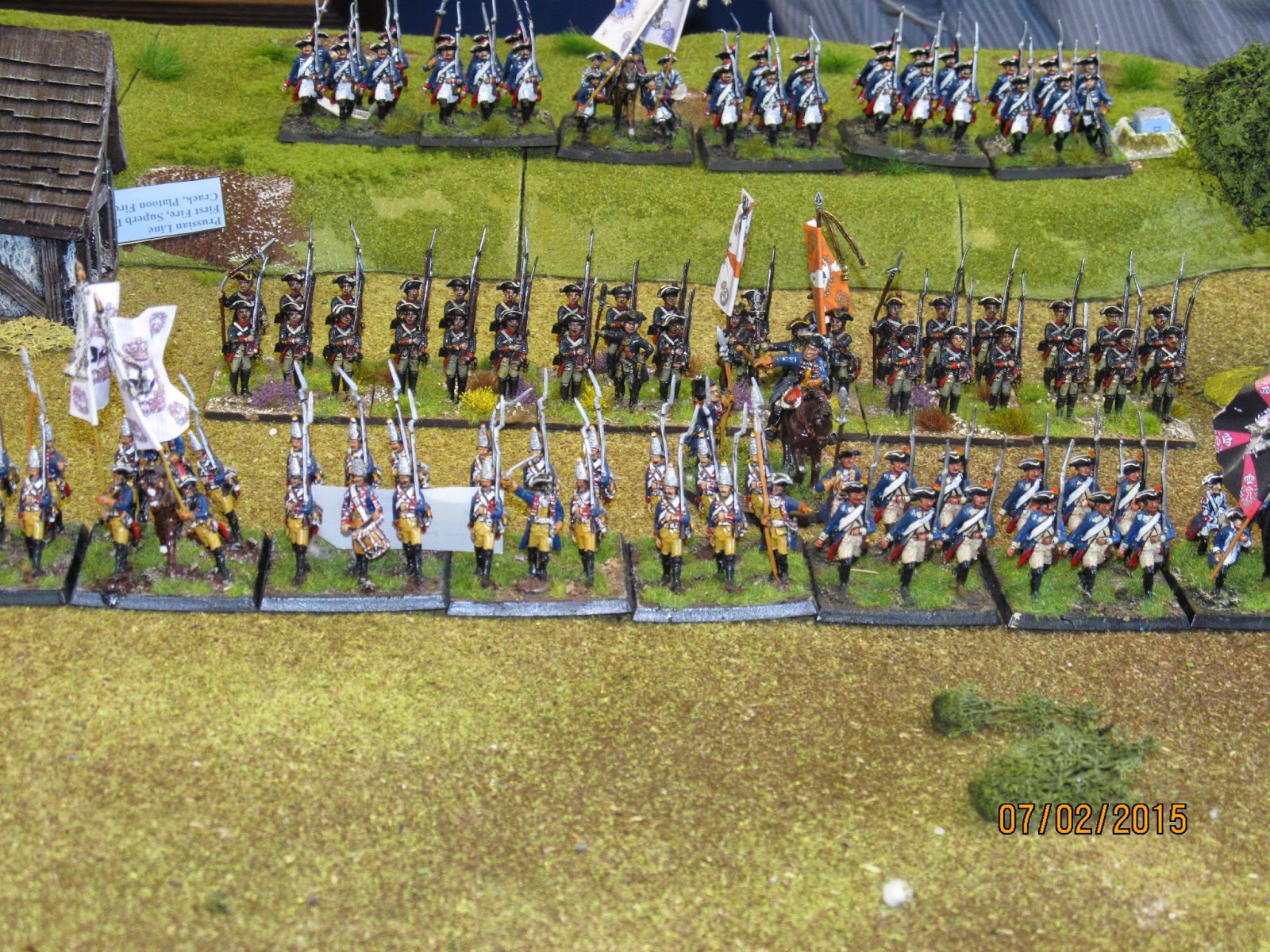 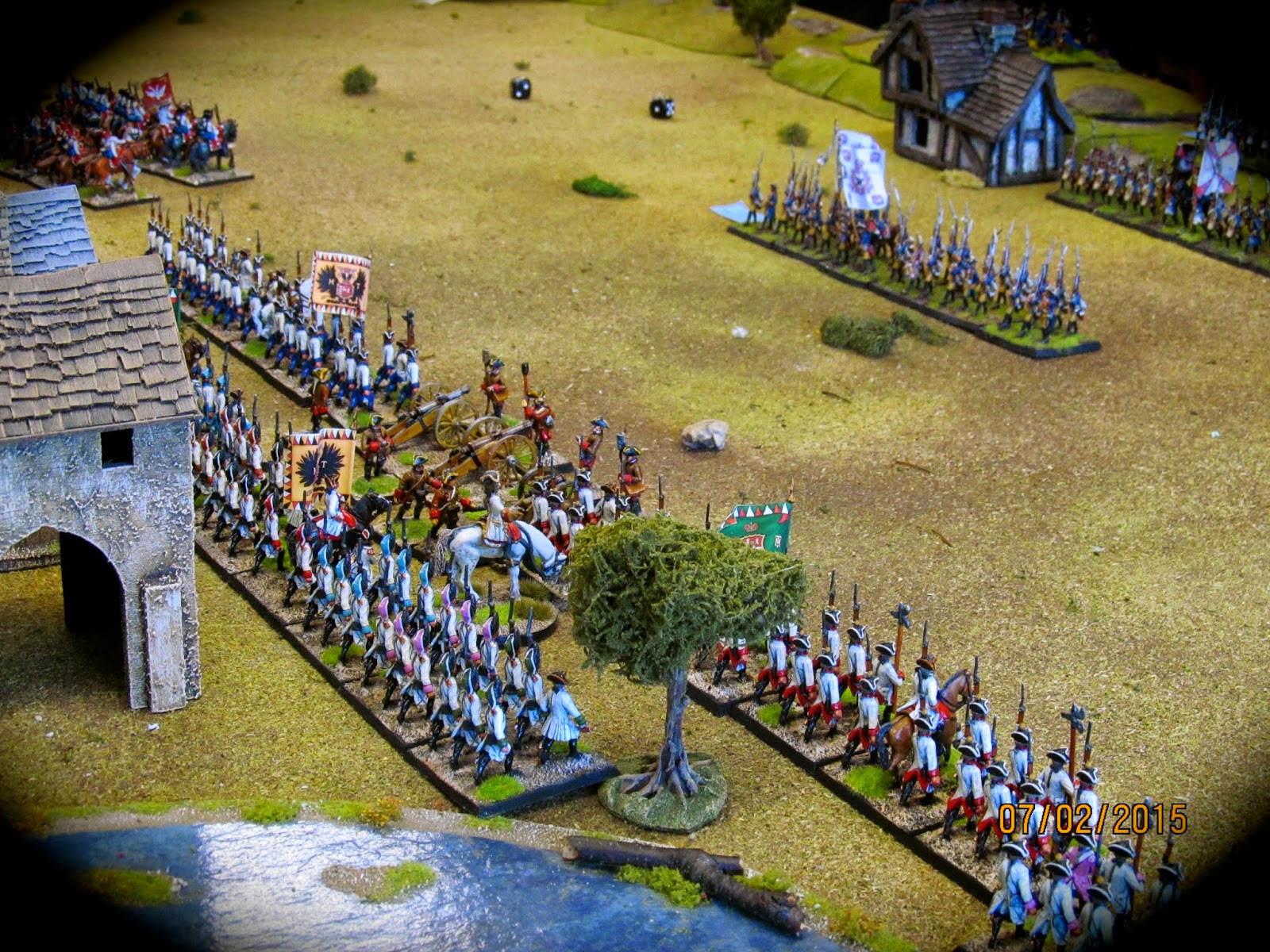 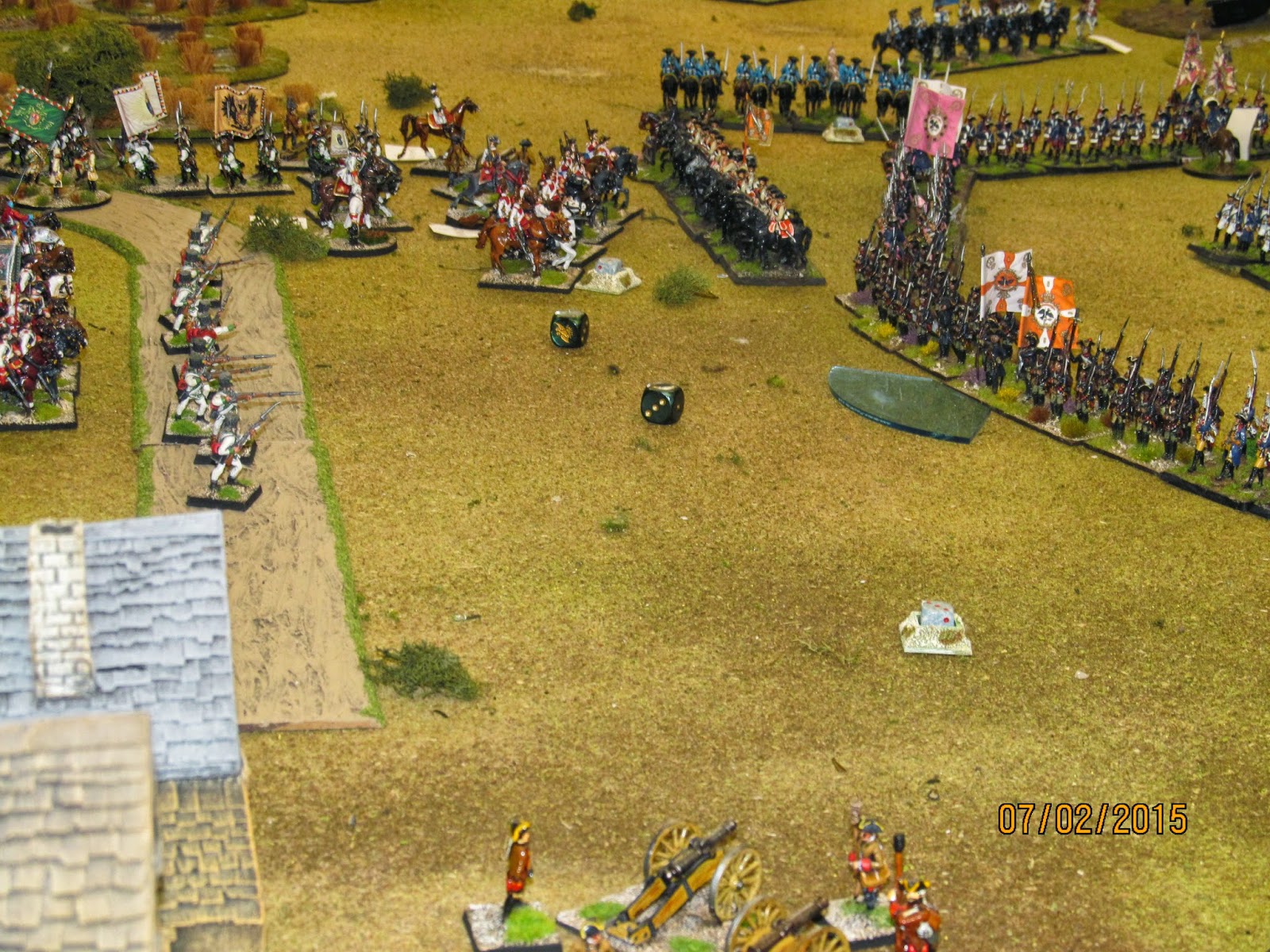 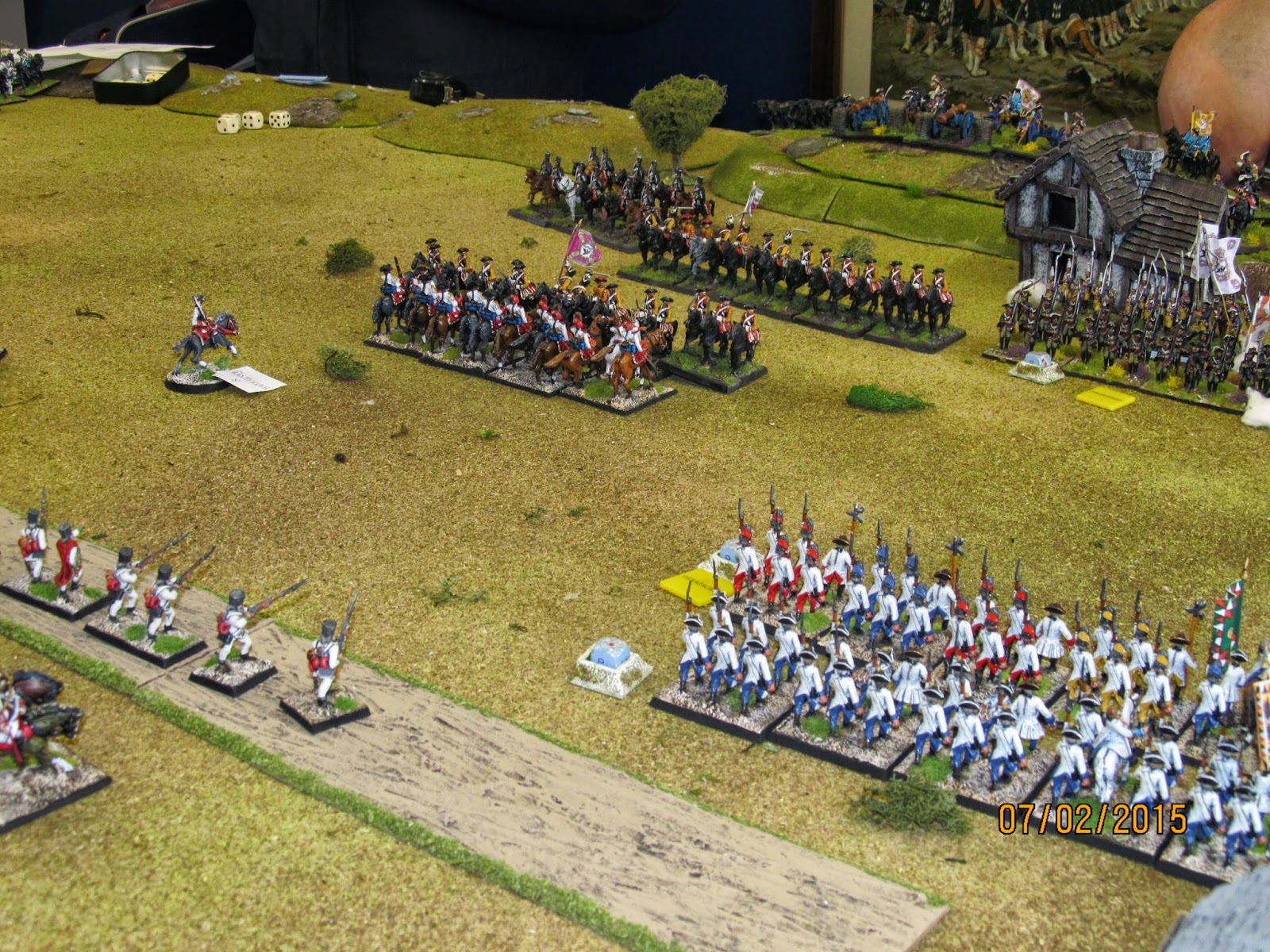 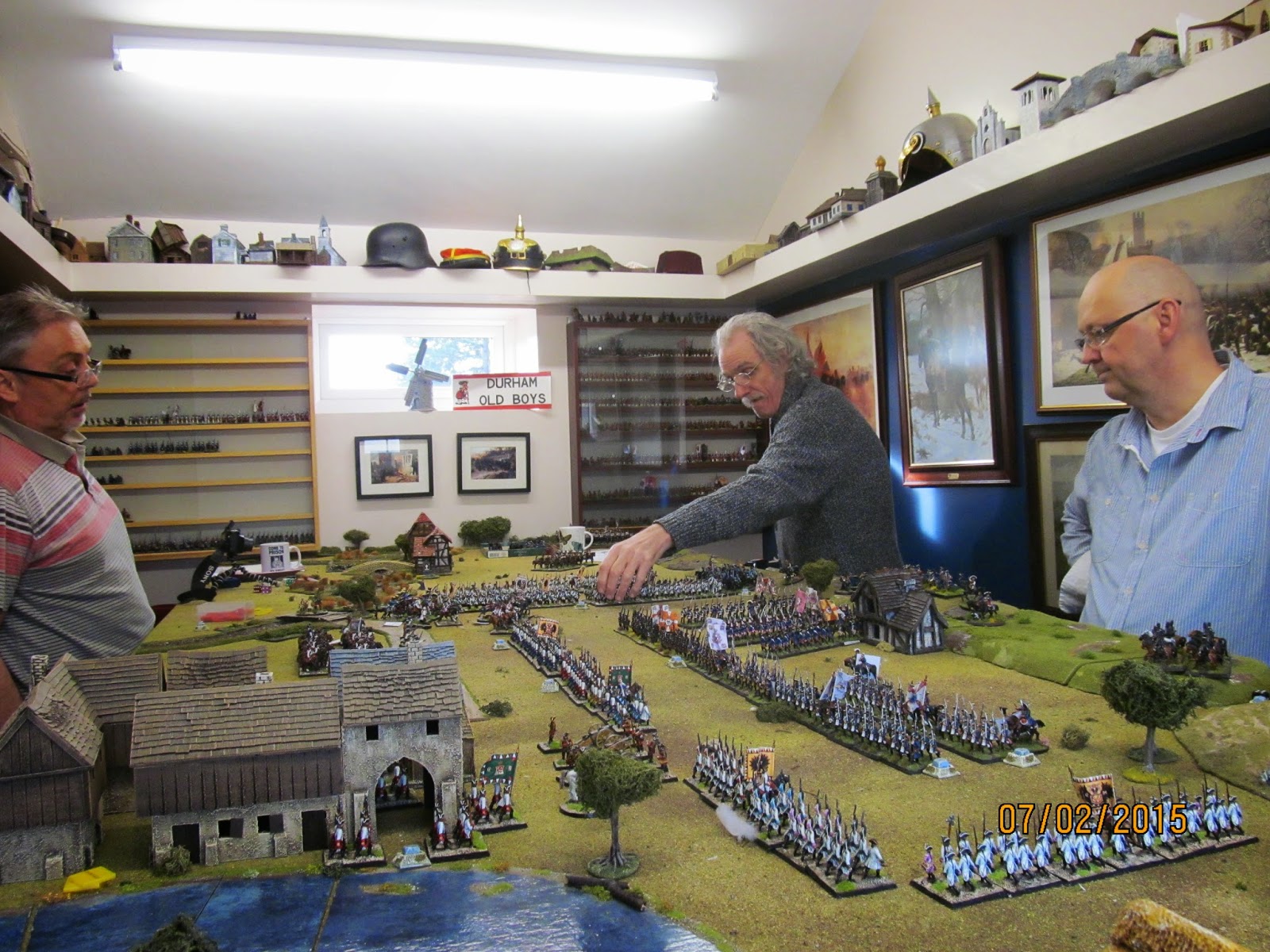 (The battlefield: The players contemplate what to do. In the foreground Paul's Prussians are taking a hammering from the Austrian line and Rob's Austrians were struggling to make headway having been hit by the Prussian reserve artillery and cavalry in the flank! l to r Rob, John, Paul.) 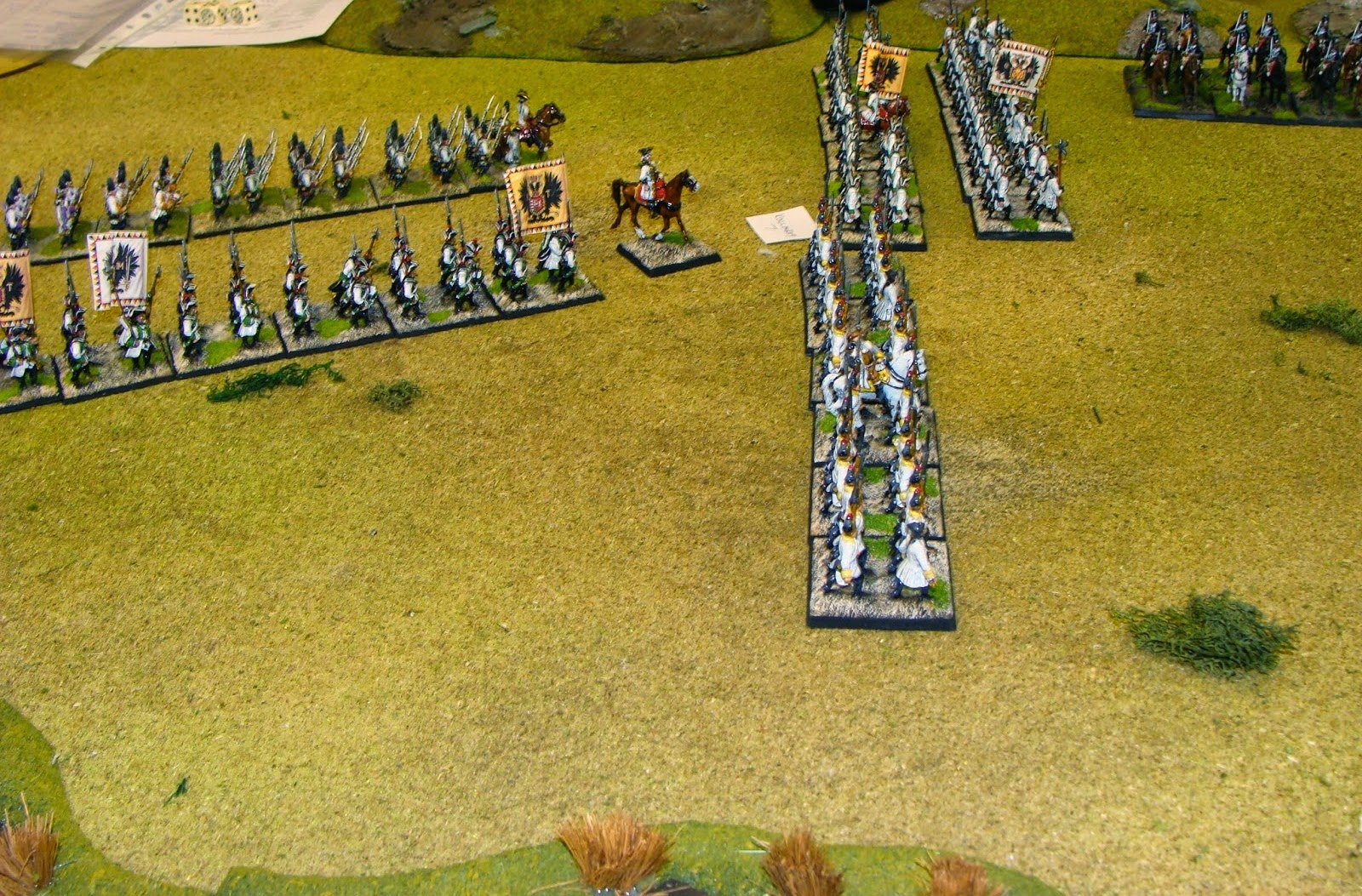 Meanwhile, over on the other flank Rob had taken advantage of the mist to move his troops across the  Morellenbach stream using the bridge at Sullowitz and onto the flank of the Prussian advance. This was going really well as when the mist cleared his infantry and cavalry were in a great position to roll up the Prussian flank. Sadly, Rob managed to throw a blunder and his leading infantry battalions were forced to withdraw for two moves! At the same time more Prussian Cuirassiers and Dragoons appeared , supported by two batteries of guns, and drove off much of what was left of Rob's cavalry on that flank before piling into the flanks of his infantry who had just advanced again following the 'misunderstanding' that took them to the rear. In the space of a couple of turns Rob's entire infantry brigade was swept away and his cavalry rendered useless due to the casualties they had sustained thus far. 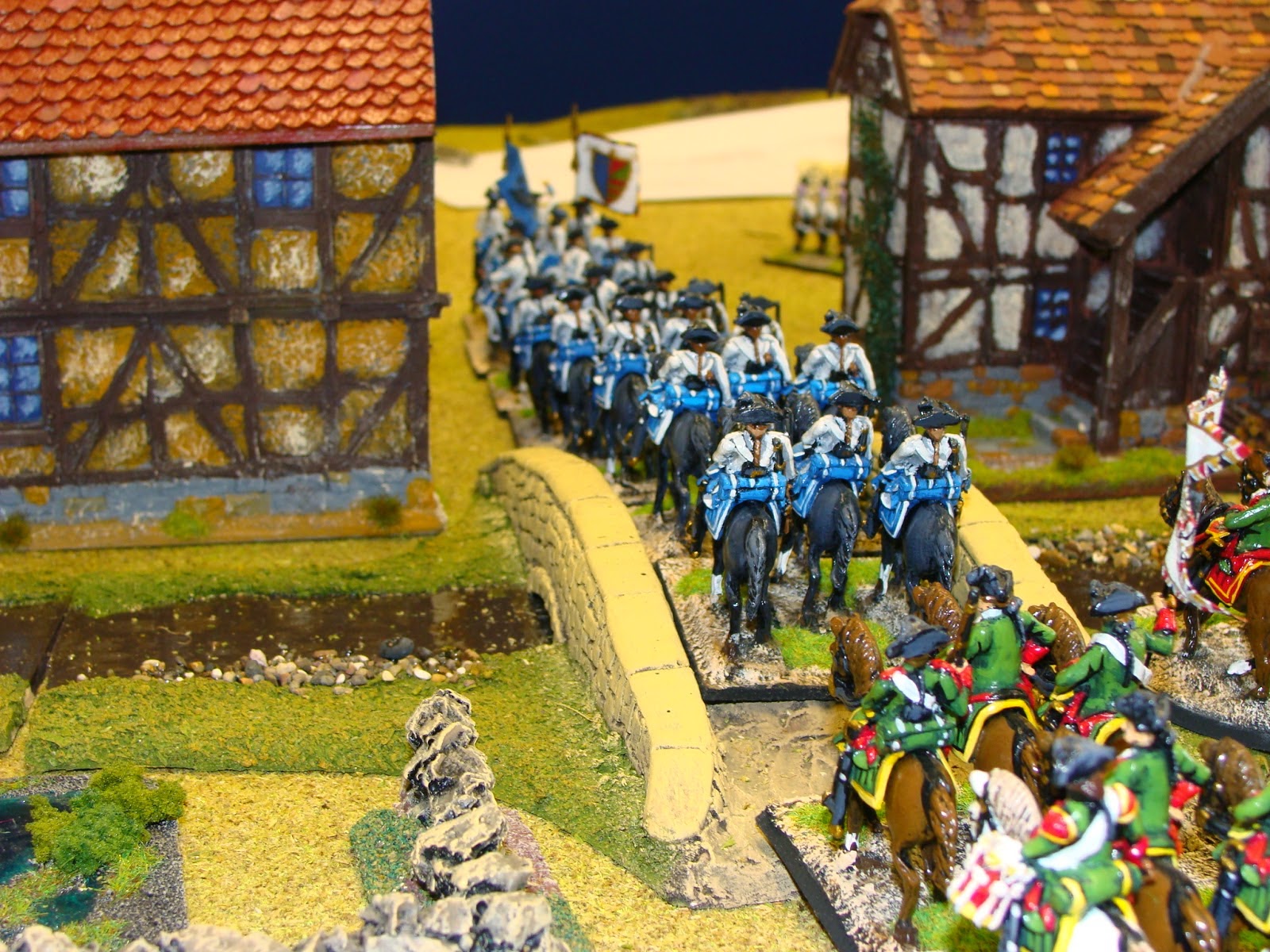 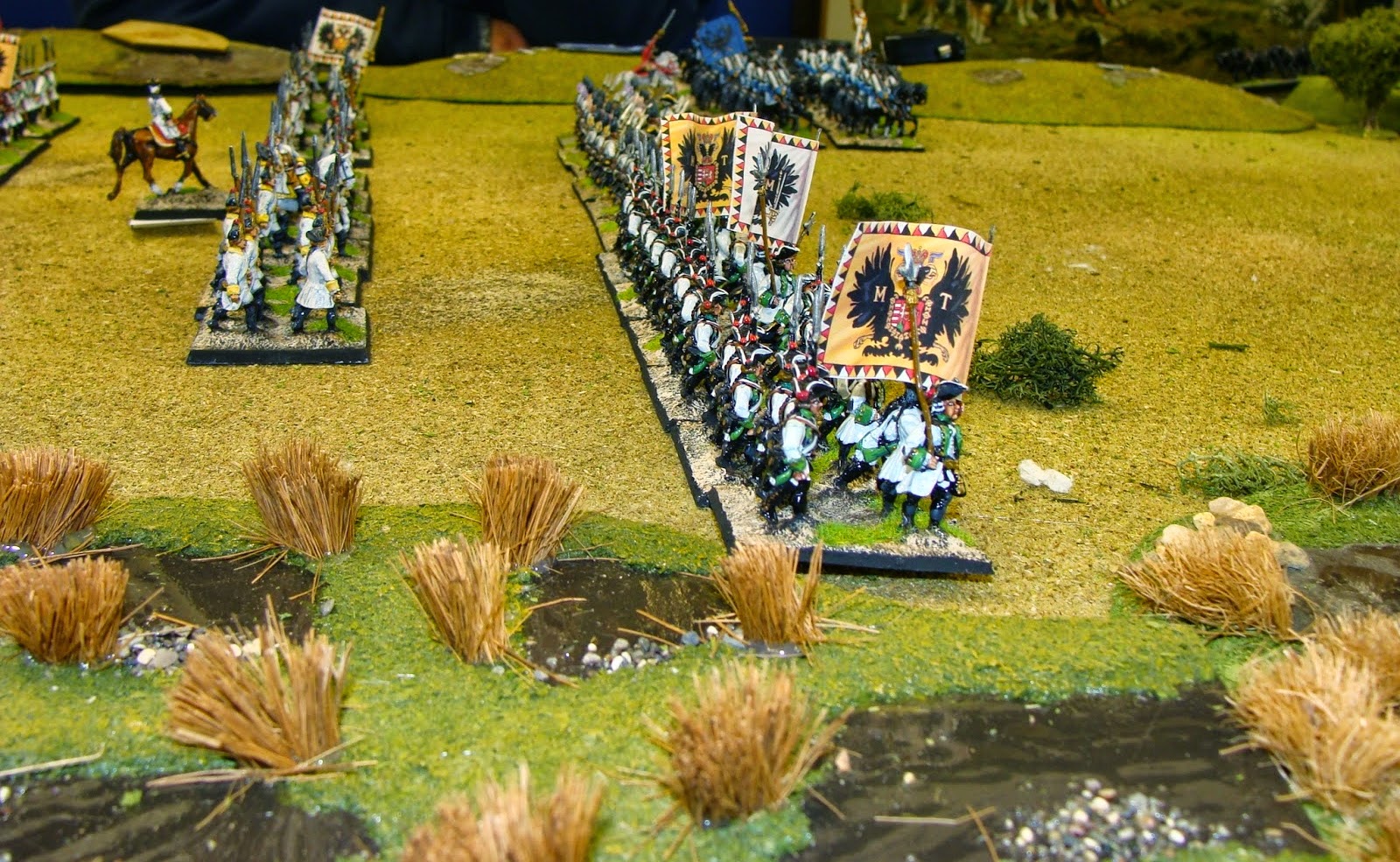 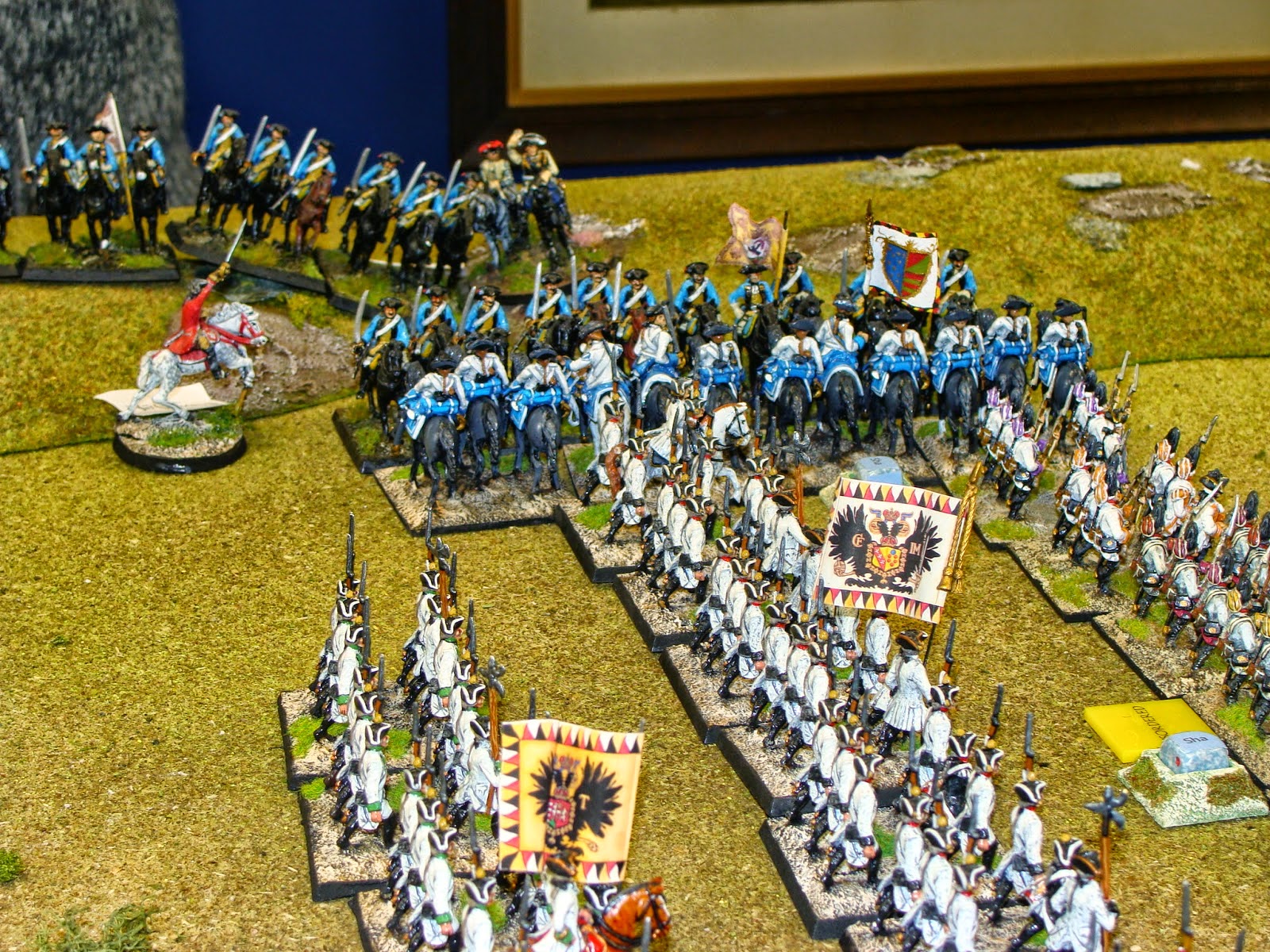 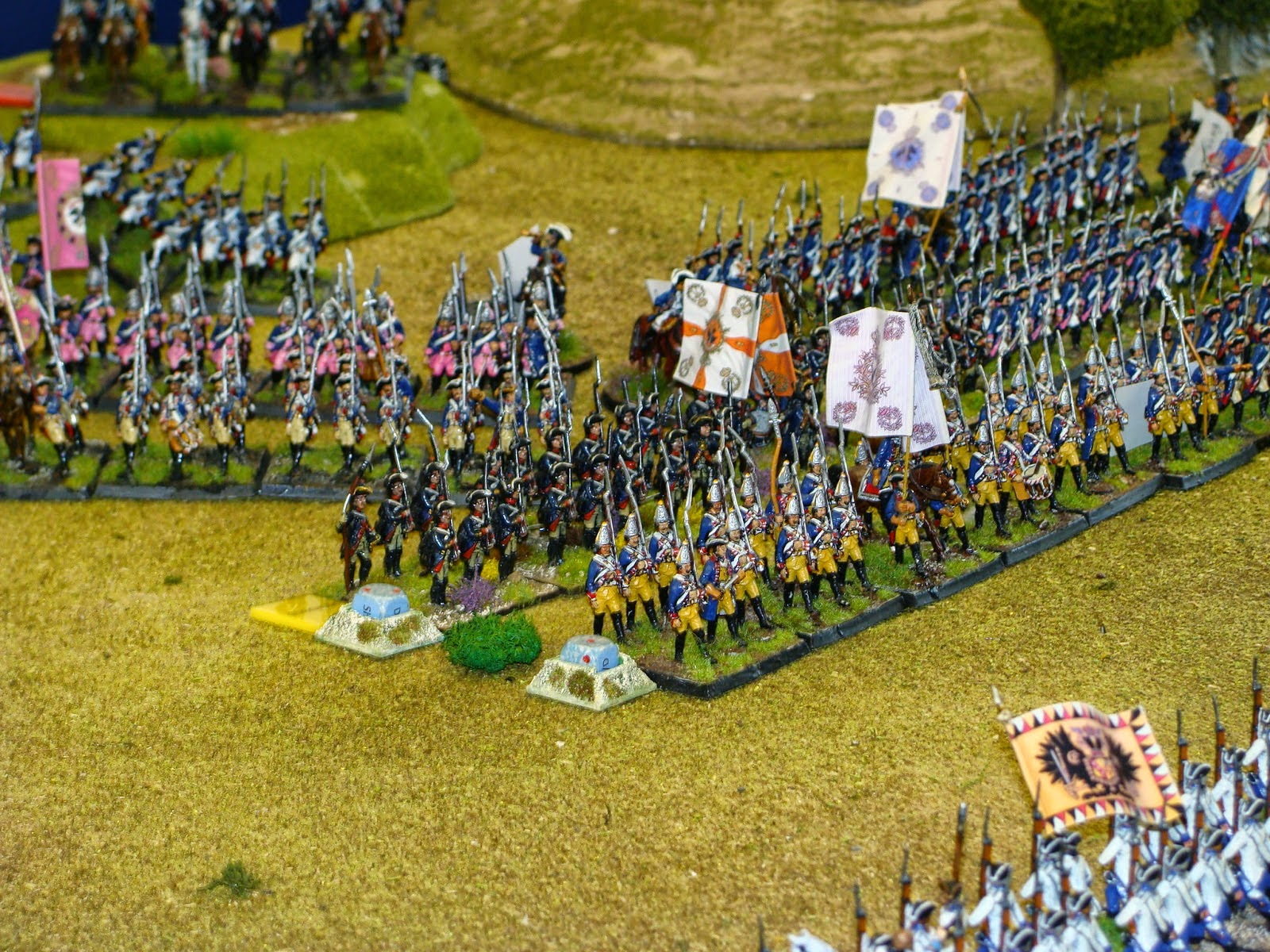 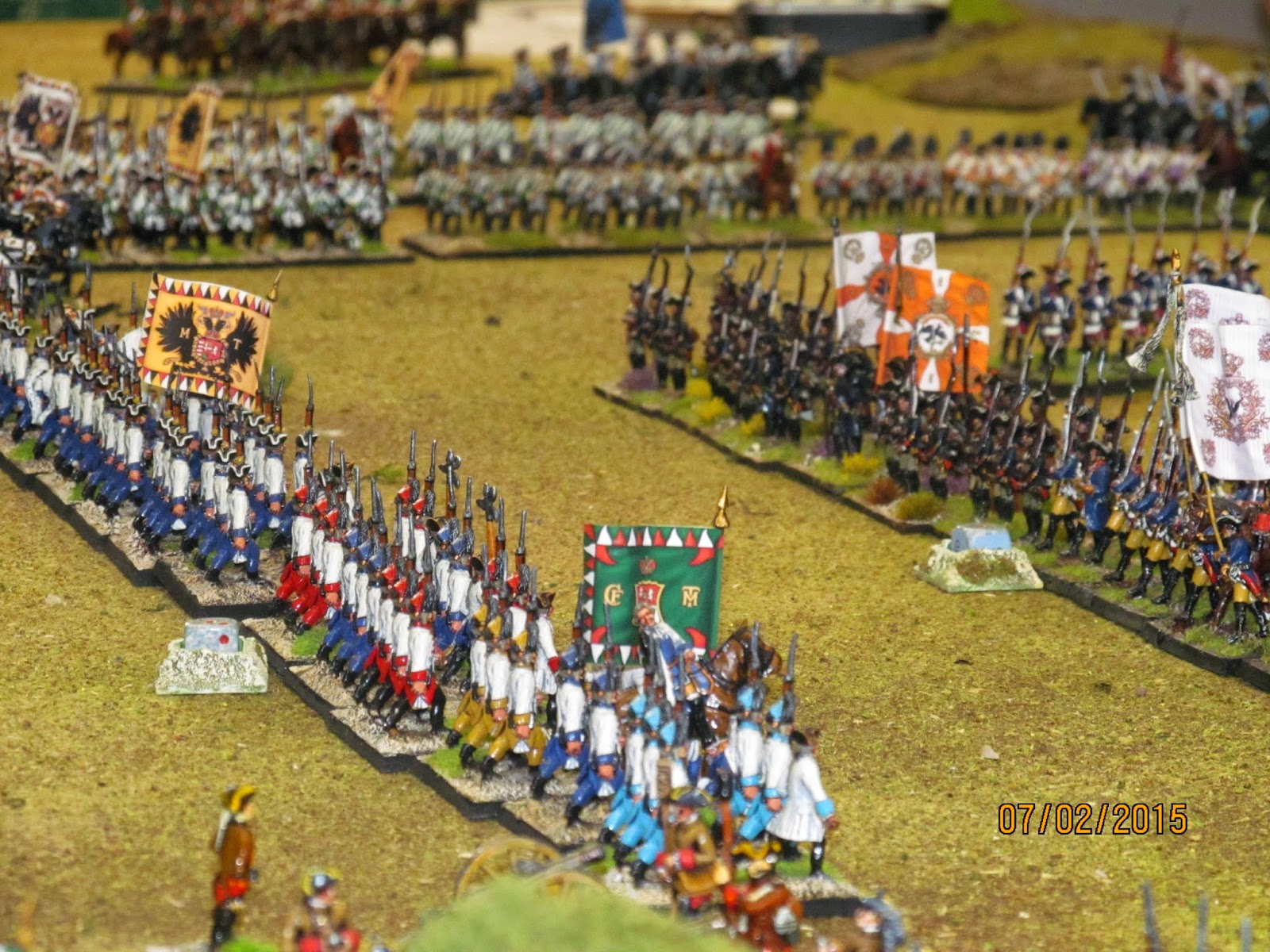 Back on the right flank, the doughty Austrian grenadiers finally failed a break test and ran away. The reserve cavalry moved from behind the sunken road but were driven off  by the Prussians. No sooner had the Grenadiers broken than the remainder of the brigade proceeded to fold, assisted by the late appearance of the final brigade of Prussian cavalry who caught one battalion in the flank. As a result the Austrian army was broken, although the Prussians had suffered something approaching 40% casualties.

Before lunch I think everyone would  have agreed that the Austrians were going to win. After lunch the tide of battle turned so swiftly I don't think any of us actually know what happened to precipitate the Austrian collapse, on the right especially! Oh well, never mind. It was a great game and a perfect way to spend a cold february Saturday.

Next up, not sure when yet, will be the action at Reichenbach.
By Colin Ashton - February 09, 2015