As stated in the last post, this week I decided we would refight Breslau, the battle that would see the demise of one of Frederick's best commanders FM the Duke of Brunswick-Bevern, as his defeat, subsequent 'capture' and 'retirement' meant that for him the Seven Years War was over. He was lucky as three of the other Prussian generals present were court-martialled and imprisoned, one for three years.

Anyway, I digress. The battle was in my opinion a difficult one to recreate. That explains why I'd missed it out as it should have been played between Rossbach and Leuthen. I decided to focus on the main Austrian attacks on their left wing. There wasn't a great deal of action on the right wing, where Nadasdy was facing Zeithen in command of the Prussian left; certainly their contribution to the battle had little or no impact on the main action. Even by cutting off half of the battlefield the Prussians were outnumbered over 2:1, especially in cavalry.  Back in 1757 the Austrians had rapidly thrown seven pontoon bridges across the River Lohr, which ran across the Prussian front, and poured their troops across them, as the Lohr and its marshy banks was to all intents and purposes impassable to formed troops, horses and artillery. In the game, the only way to cross was by the five marked bridges/pontoons, although I allowed troops retreating as a result of poor morale to cross the river unhindered. 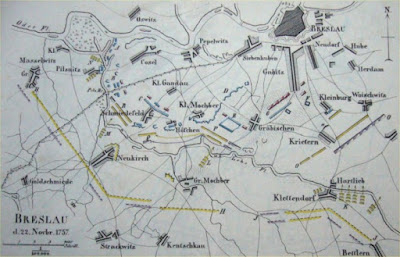 We threw for sides. John got the Prussians and probably what he thought was the short straw. Robbie and I were the Austrians (Robbie was CinC and took the right flank and everything up to and including the reserve artillery). Our 'plan' was to get everything over the river asap, with the main thrust being on our left with my reserve cavalry under Serbelloni and Stampach. We were prepared to take heavy casualties from the Prussian artillery as we crossed the bridges in march column, but hoped that our artillery and weight of numbers would prevail, even against the superior quality Prussian troops. Well, as someone famous once said, "No plan survives the first contact with the enemy." How true! 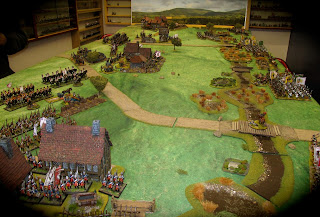 The battlefield from the Austrian left. In the foreground the village of Pilsnitz, in the centre Schmiedefeld, then Maria-Hofchen and in the far distance Klein-Mochbern. All these villages were protected by entrenchments, well-fortified and each garrisoned by a battalion of infantry and a battery of artillery. 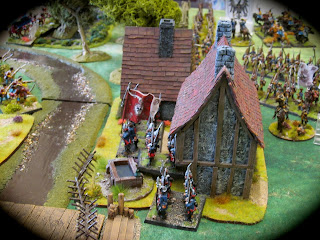 IR 49 garrisoning Pilsnitz, supported by two battalions of grenadiers to their rear. 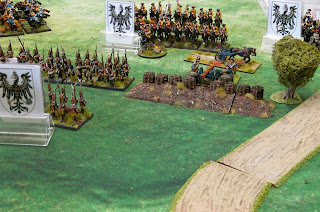 The Prussian battery providing support to the garrison of Pilsnitz. 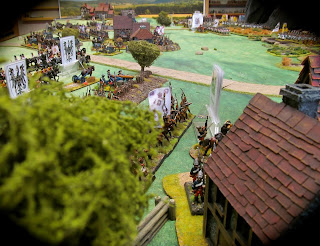 A view from the west, along the main battle line. The Austrian grenadier corps can be seen in the far distance already across the river. 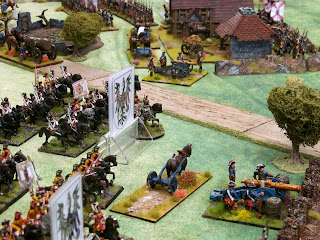 The Prussian reserves, the cuirassiers of Generals Kayau and Pennevaire. These performance of these two brigades were to be crucial to the battle's outcome. 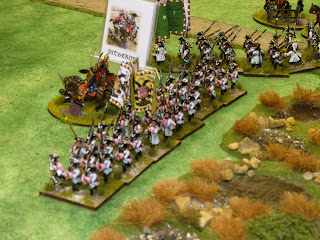 The Austrian de Ligne regiment leads MacQuire's command across the river. This brigade struggled to get and stay across the river as it became the main point of attention for several Prussian batteries. Eventually they established themselves, more of which later..... 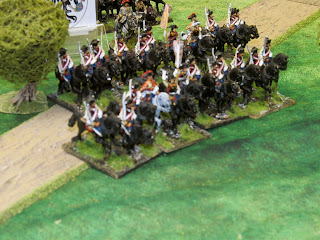 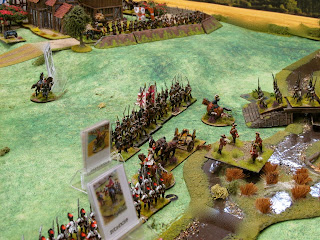 The Austrian grenadier corps had been badly mauled. One battalion had been broken and the horse grenadiers forced to retire. The command of Stahremberg is crossing the river to support the grenadiers, preceded by their artillery. In a rash/stunning/brilliant/foolhardy move, John advanced IR 19 Margraf Karl right up to the Austrian line to block their advance off the bridge. Thankfully for us the artillery was able to deploy and canister the Prussians while infantry managed to deploy off the bridge. Although John's move ultimately led to the destruction of his battalion, he succeeded in slowing the Austrian advance significantly. 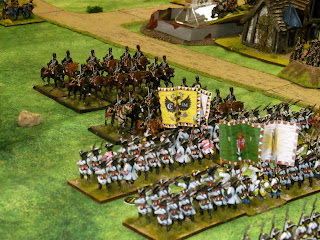 Robbie's infantry had no sooner got themselves sorted out after crossing the river than they were charged by Prussian hussars. The hussars were destroyed but the Austrian losses were mounting up. 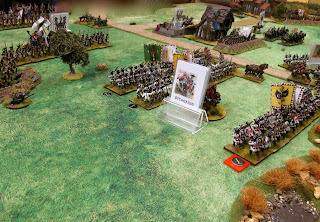 The Austrian battalion which had seen off the hussars withdrew to rally, while two more battalions continued to advance and put pressure on the Prussian centre. Sadly they were soon forced to retire, but not before driving off one battalion of Prussians. 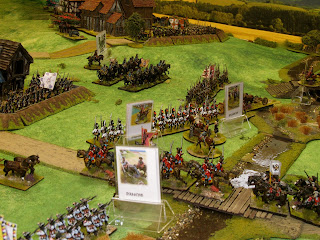 Finally, Count Lucchesi's cavalry were able to cross the river and support the remaining grenadier battalion in front of Maria-Hofchen. 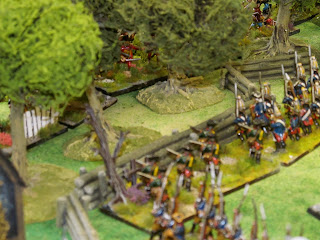 The Croats made a late appearance on the extreme Prussian right, and began trading shots with the grenadiers and feld-jager covering the army's right flank. 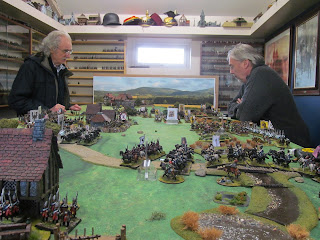 Brunswick-Bevern and Charles of Lorraine pondering their next move while Stampach and Serbelloni's cavalry cross the river. John managed a succession of failed command rolls which meant his own cuirassiers were unable to both respond to this threat and/or atempt to stall the Austrian crossing in the centre. 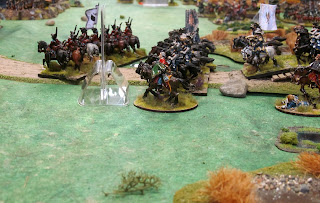 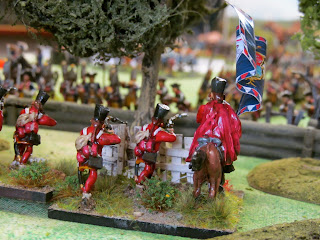 Croats taking pot shots at the feld-jager and grenadiers. 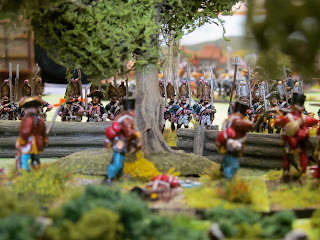 Prussian and Austrian cavalry clash, Jung Modena dragoon regiment about to get a hammering at the hands of he Gens d'Armes. 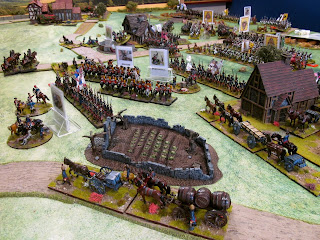 John pulled one of his cuirassier brigades out of the line (GM Kayau's) on the right flank and redeployed them to the centre where the Austrian pressure was beginning to tell. This move probably saved the day for the Prussians. 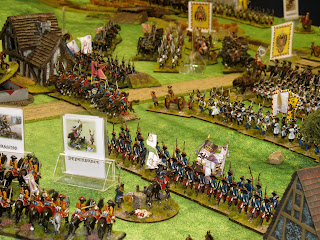 Bypassing Maria Hofchen Austrian dragoons supported by artillery and several battalions of infantry start to drive into the Prussian centre. 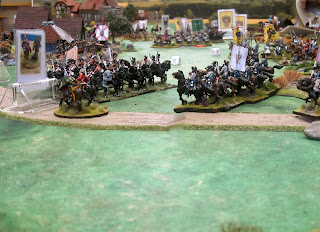 Back on the Austrian left, with the Jung Modena dragoons routed the Prussian cuirassiers followed up into the Alt Modena cuirassiers, breaking them before being forced to withdraw to regroup. 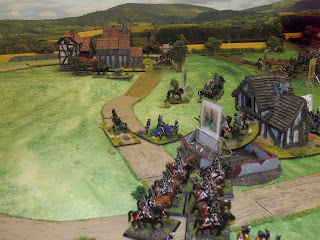 The rallied Prussian hussars behind Maria Hofchen with the cuirassiers of GM Kayau. The ground between them and the village of Klein Mockbern is empty of any living Austrians. 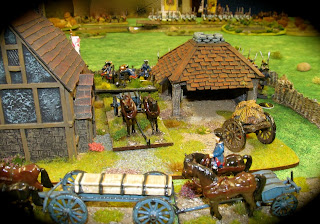 Similarly, there is an uninterrupted view to the south from the village of Prussians garrisoning Schmeiderfeld towards the Lohr. 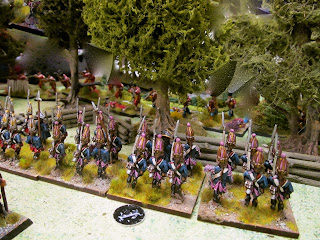 Prussian combined grenadiers easily held onto their position throughout the day, the Croats' fire being totally ineffective. The casualty marker is for a bounce through hit from a cannon ball.

The wavering remains of the Austrian centre. All the battalions are close to breaking point. 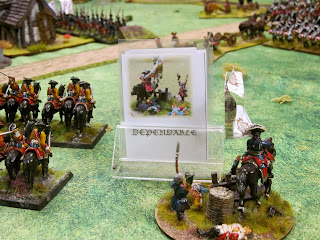 A detail illustrating the cards used to show a general's ability. The photos on the cards are each matched with the corresponding commander base. There are three versions for each general, for Dithering, Dependable and Dashing.

By this time we had played 9 moves including a good break for lunch.  On the Austrian right, they had managed to evict the Prussians from Pilsnitz but were unable to get troops across the river to take possession.  The left flank was battered as half the infantry had been driven off and all that remained was a brigade of heavy cavalry and a battery. In the centre the Austrians had crossed the river but had seen most of their battalions driven back across it. Some made several return journeys back and forth during the course of the battle as they withdrew to rally then were thrown into the fray again. Very WW1.  On the Austrian right it was the same. Most of the infantry was too exhausted to continue or had run away, leaving only cavalry and artillery to continue the fight.  To be fair, although the Prussians had only lost four or so units, many were on the very brink of being forced to withdraw and several had already been forced to retire and rally before, like their Austrian comrades, they were thrown back into action! I really like this particular aspect of the rules.  Poor GL Brandes commanding the Prussian right in and around Pilsnitz was killed and his replacement (who's ability was randomly selected and ended up being better than his boss's) was killed almost immediately afterwards. GM Lestwitz also had a knock on the head but otherwise that was it among casualties of the great and the good.

The final verdict was a tactical Prussian victory, as on the day, but they were so battered that, what with Nadasdy's corps largely untouched, Bevern would no doubt have been forced to follow the historical precedent and withdrawn across the Oder, leaving a sizeable garrison in Breslau that would surrender the next day. Bevern of course just happened to get himself captured by the Austrians. He was held captive for quite a while then released on the orders of Maria Theresa (a distant relative apparently) only to find himself sidelined for the rest of the war. And what of the survivors of the Prussian army at Breslau? They joined Frederick in time to get their own back at Leuthen just two weeks later!

It  was a really tough game for both sides. John said he thought he'd loose at the start of the game, and I was quite confident that the Austrians could pull off a decisive victory. We were both wrong. If I ever replayed this one I might make the Rohr a little less difficult to cross; I struggle to work out how large numbers of Austrians could have rapidly deployed on he Prussian side of the river. Maybe I am missing something......

The rules (Honours of War) worked great and Keith now probably owes me a crate of Crystale champagne or a dozen bottles of very mature single malt :-)