I haven't been able to organise a game with my neighbour Peter for ages. Fortunately we were able to play a smallish impromptu game on Saturday evening. I had already sorted out the orders of battle and stuff for this battle and the terrain was very simple so it took no time to set up. It was a great opportunity to put almost my entire Reichsarmee collection on the table, and there was even a chance they might win against a smaller Prussian force. I was able to recreate the battle without having to resort to any 'bath tubbing' so each unit in the battle was represented on the tabletop. 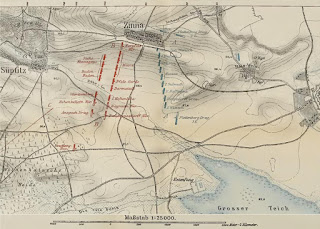 I have no idea who some of the minor commanders on either side were so I've made some up based on the names of a couple of the regimental commanding officers. 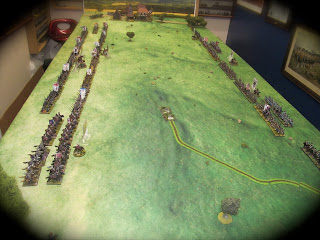 Battle lines are drawn. The Prussians have advanced towards the enemy and have already driven back some Imperial grenadiers and Croats. The latter are rallying in the town of Zinna under the watchful eye of Prussian hussars out of sight behind the wood in the far right corner. The little stream is a minor obstacle to any formed troops crossing it. 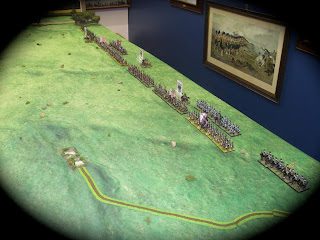 The Prussians. Off table to their rear about where the painting is hanging is a battery of 12pdrs. They would be in range of any targets within 100cm of the Prussian table edge but Peter decided to limber up and bring them forward. This did of course take quite some time and denied the Prussians of any long range artillery support. The Imperial army of course has no field artillery, just battalion guns. 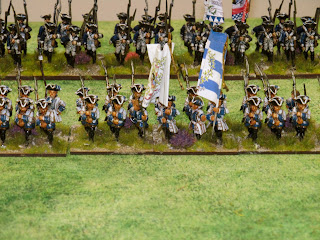 One of two brand new units, the Mainz regiment. The flag is not correct but it looks nice. 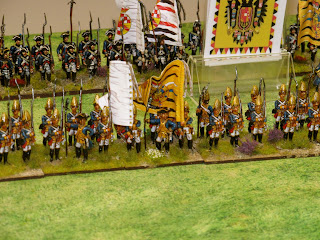 My other new regiment is the Swabian District Fusilier Regiment Alt-Wurttemberg.  At a pinch I could swap the flags and they'd do as a similarly-dress Prussian fusilier regiment if I ever needed to. 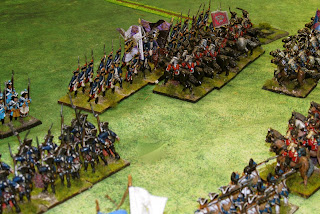 The Austrian Bayreuth cuirassiers crash into the Prussian line. Predictably, although they survived the closing fire they were bounced in the melee and forced to retreat. They were to be out of the game for several turns while they tried to rally. 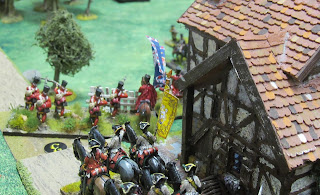 Croats on the outskirts of Zinna, and behind them the Kurpfalz cuirassiers (in reality Hanoverian horse). 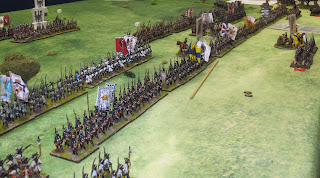 The 1st line of the Imperial army failed its command roll due to the dithering of their commander. The second line however passed through and advanced towards the Prussians. 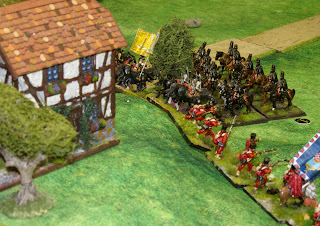 The Prussian hussars charged the Kurpfalz Cuirassiers who countercharged. The hussars were repulsed and withdrew to lick their wounds but my cuirassiers failed to pursue, which is probably just as well as they had taken heavy casualties. 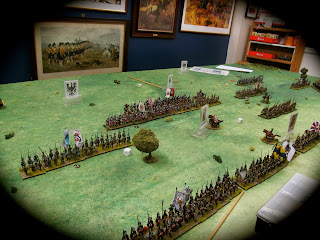 Very quickly a large gap appeared in the Imperial centre as one unit broke and others were forced to retire after a punishing exchange of musketry. Fortunately the Prussians had to pause to rally their line as well, which gave the Imperial commander a breathing space to bring up fresh troops from what had been the original front line. 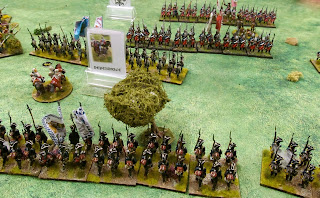 Imperial infantry closing in on the Prussian right, which is starting to buckle as one Frei Battalion has already broken. 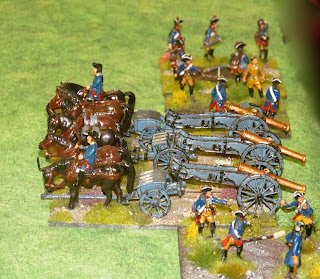 Rather fortuitously, and a turn early, the Prussian artillery arrives on the table edge. 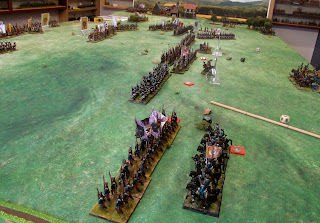 The Prussian left wing (every single unit) has had to be withdrawn to rally. The Imperial troops were sadly for me in no position to take advantage of this slight problem for the Prussians. 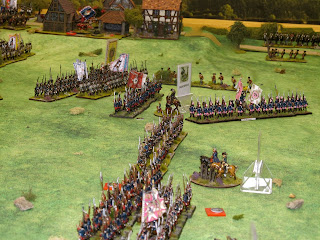 In the far distance, the Freikorps Jager are holding off the badly damaged Imperial cavalry. They were on the brink of being forced to withdraw and one more hit on them would be enough, so I was hesitant about using them to clear the Jager away, especially as the Prussian hussars had now rallied. In the centre, one unit of Croats is annoying the flank of Peter's right wing while two fresh Imperial battalions advance to their front. The two Prussian grenadier battalions have also now rallied and are ready to advance back into the battle. 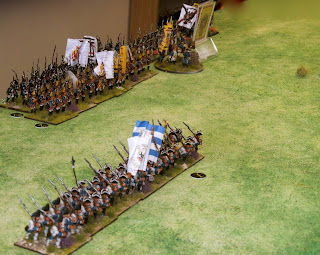 The Mainz infantry regiment failed to move in the game as they had become isolated from the rest of their brigade and their commander. To be fair they were classed as 'inferior' for the game and their brigadier was a ditherer so perhaps no wonder..... And they were new to the table and escaped the 'new units always run away' condition! 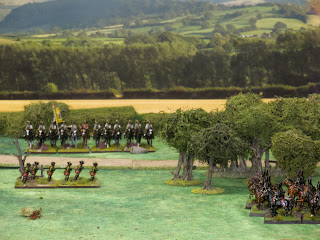 A better shot of the stand off between my cuirassiers and the jager. The hussars are ready to pounce should the cuirassiers try anything rash. 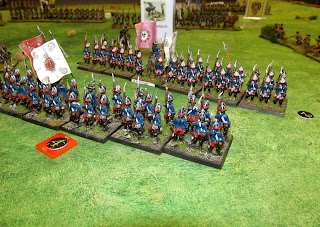 This fusilier battalion had been forced to retire and is now rallying, covered by their comrades to their front who they had to pass through on their way to the relative safety of the rear. 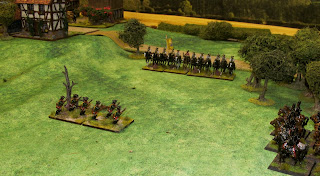 The Imperial cuirassiers advance but are too far away to charge home or catch their quarry, as the Jager evade safely. 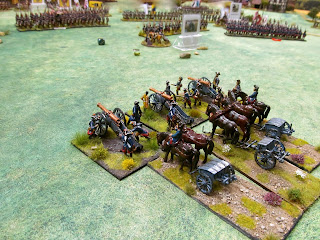 The Prussian artillery unlimber and proceed to knock chunks off the Imperial battalions rallying in the distance. My other new regiment, the Alt-Wurttemberg fusiliers breaks under the pressure and flees the field. 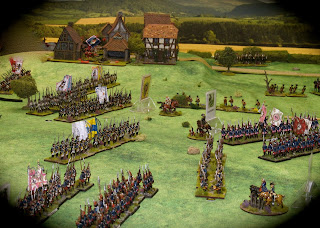 Viewed from here the battlefield looks incredibly confused. It was! The Prussian grenadiers in the centre are now trudging forward with support from the 12pdrs to their rear. The fusiliers beyond them are holding the Imperial advance comfortably. 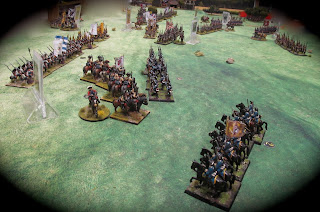 On the Prussian left, the Imperial Bayreuth cuirassiers attempt a charge to the front of a Prussian Frei-battalion. The latter fail to stop them with a feeble volley but in the melee hold their own and break the cuirassiers. The Prussian dragoons have also rallied sufficiently to move them back into action. Any remaining cuirassiers on the Imperial right are on the brink of breaking so are no longer a threat as, being 'inferior' they are unable to retire far enough to rally any hits off. 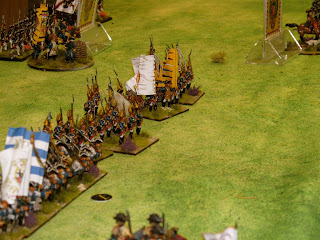 The Alt-Wurttemberg fusiliers having just taken the full force of the Prussian 12pdr battery. 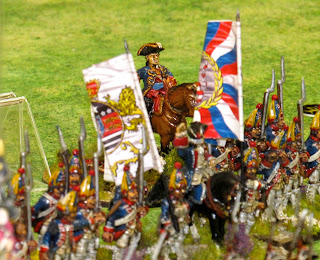 My Hessen-Darmstadt Leib Grenadiers still in action and managing to hold the centre. 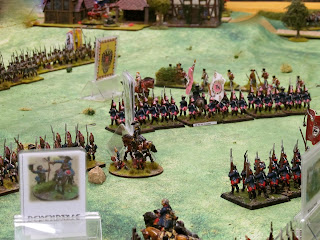 The opposition on the Prussian right is in full flight or withdrawing as the Prussians begin to sweep (albeit slowly) forward. 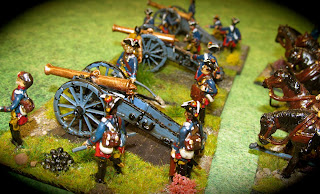 The real winners of the battle? Maybe.

So there ended what had been a rather fun game, with both sides having to harbour their forces and re-cycle units throughout the battle, only the Prussians could do it better, and faster. This is one of my favourite aspects of the rules as it makes you have to think. The impact on shooting, melee and rallying was very evident where the poorer quality of some of the troops on both sides were concerned, which felt right. The big battle winner were the two Prussian grenadier battalions, although the timely arrival of the artillery towards the end of the game was especially helpful as they were able to ensure that the Imperial units trying to rally in the rear were unable to as they kept them under a steady but not particularly devastating bombardment, but it was devastating enough!

We actually had to stop the game after about two and a half hours as my back was giving me a lot of trouble, but it was clear then that apart from a miracle the Imperial army was doomed. I played a couple more moves on Sunday just to see what happened. There was no miracle although it wasn't the  complete and instant walkover it might/should have been as the Imperial left took longer to deal with as they resisted valiantly for a while, forcing the Prussians to retire and rally once again.

Next week's game? I haven't a clue yet. I have plenty worked out but might take a break from the Seven Years War for a couple of weeks. I do know that Robbie is keen to play-test the game we're putting on at the AMG16 event in June. We shall see.