This week’s game. Back to the Eighteenth Century.

This week I arranged an 18th century game using Black Powder for the Burrowers. It wasn’t based on anything in particular but I intimated that it was. I also took the opportunity to field some troops that had never yet had their baptism of fire, which turned out to be a mistake given the usual mantra that new units always run away!

The French were one of the belligerents. On the other was a combined allied force of English, Hanoverians, Brunswickers and Hessians. The French had more and slightly better cavalry and heavier guns, while the allies had a couple more battalions of infantry. Most of my French are Ebor WSS figures but there are some Cran Tara, Black Hussar and Foundry in there as well. I went with Ebor as I got an unmissable deal (working out at about 25 quid for a 40 figure battalion as I bought LOTS) and I thought I'd base the army around the French during the War of Polish Succession to account for their slightly out of date appearance. My toys so I do as I wish of course! The Allies are a mixture of (mainly) Cran Tara and  Minden with some Foundry and Warlord.

Paul, John and Nigel were the French while Neil (British and Brunswick), Richard (Hanoverians and English horse) and I ( Hessian and Hanoverian horse) were the allies. We used Black Powder 2 with my house rules, some of which we forgot of course.

Both sides were against the clock as there was a chance that either could be reinforced by a brigade entering in the flank of the enemy. This was decided by me rolling a dice each turn, adjusted depending upon how the battle was playing out, by which I mean that the side nominally loosing had a better chance to get reinforcements. In truth there were NEVER going to be any for either side but nobody else knew that. Tee Hee. Hopefully these photos, some of which were taken by Richard, give an idea of how the game played out. 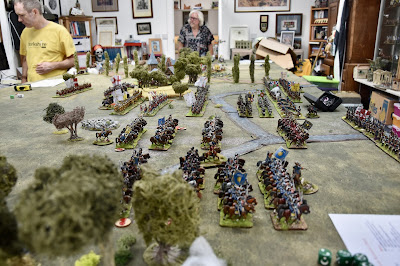 Well, talk about extremes! The dice just didn't fall right for the allies during this game. When we finished it was a clear French victory, given that half of our brigades were out of action. It was actually closer than the end result suggests. Black Powder being what they are it was a fast and bloody game, but maybe rather dull after the past couple of weeks of playing some rather more dynamic ancient games. Nevertheless it was great fun, and I had at long last  got my 18thC Brunswick, Hessian, Hanoverian and English on the table for the first time, on which basis it was expected that they'd not do terribly well so my expectations were met. The French played well and their horsemen under Paul kept the pressure on the Brunswick brigade throughout the battle.  I don't know what the French plan was but our went t*ts up from turn 1. Those dice scores! If only...........