For a Parliament Freely Chosen. 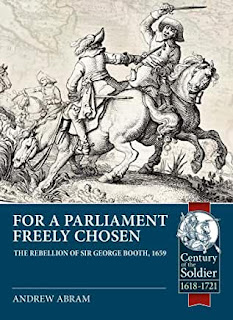 I’ll be the first one to admit that beyond a vague awareness of some troubles prior to the Restoration of the Stuarts I was non the wiser when it comes to the events described in this new volume from Helion. ‘For a Parliament Freely Chosen’ by Andrew Abram is No. 68 in the truly excellent Century of the Soldier series.

So, I read this book with much anticipation that I’d learn something new relating to one of the last episodes of rebellion during the last days of the Protectorate. I was not disappointed. The causes and entire course of the rebellion are covered in great detail using a wide variety of primary and secondary sources. The established view of Booth’s rebellion was that it was simply a local pro-Royalist uprising that went badly wrong in every aspect. The author challenges this view with a detailed analysis and reconstruction of Booth’s rebellion and its impact on Cheshire, adjacent counties amd England as a whole giving us a new insight into its causes and outcome.

Of particular interest is the description the events leading up to the rebellion, with descriptions of post-Civil War Cheshire and life under Cromwell and the Protectorate. There’s plenty of information relating to the persons and forces involved and of the final battle of the rebellion at Winnington Bridge. Paradoxically, given that the revolt was not seen as a Royalist-inspired one, but an objection to Parliament’s ‘government by army’ approach, even in defeat the rebellion was a success as it helped usher in the restoration of Charles Stuart, so not a bad result in my honest and partisan opinion.

As usual the book contains a vast array of contemporary black and white illustrations as well as present day images of various places of interest referred to in the book. The maps are clear and helpful for those not familiar with the geography (I was brought up in the NW so I know the area well). I like the content of the appendices as they contain the letters of Booth and his opponent General Lambert; reading contemporary personal correspondence always feels to me the best way of getting ‘into the heads’ of the various key players, and these do the job admirably.

Finally then, I learnt a great deal from reading this book, especially as I said right at the start that these events were an unknown to me, until now that it is, and I now consider myself to be much more aware of the events that befell the NW of England and N Wales in 1659. A thoroughly pleasant and enjoyable read and for English Civil War buffs I guess it must find a place on their book shelves. Highly recommended.