AIRWAR OVER THE DALE 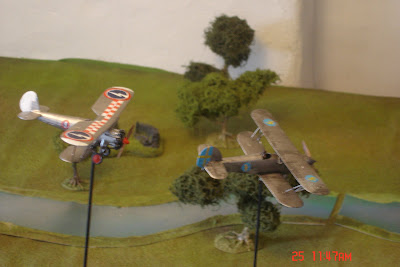 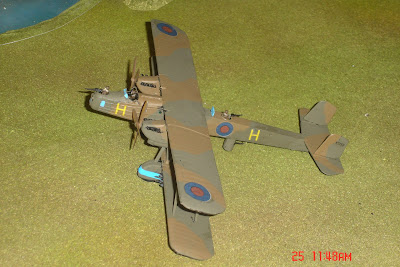 Finished the first couple of aircraft for my VBCW war in Weardale. I think my modelling skills left me when I reached puberty but they'll do! Inspired by the RAF's policing of the NW Frontier in the 1920's I decided that one of the most effective ways the Government forces could patrol the high pennine passes would be from the air. The terrain is pretty inhospitable, roads are few and opportunities for smuggling undetected are many, especially to and from the Comminust enclave in Chopwell and Socialist forces around Shildon and the Liverpool Free State.
Government forces have established airstrips at Stanhope and St John's Chapel using the showgrounds. Operating from these strips are a mottley collection of aircraft, few of which are serviceable at any one time. At Stanhope the BUF have a Bristol Bulldog fighter supporting a Government Avro Anson used for reconnaisance and interdiction over the high ground. Currently a Handley Page Heyford is located at Stanhope. Forced down by mechanical problems it is hoped it'll be airworthy in the near future (i.e. when I have worked out how to mount it on a flying base!). There is also a Gloucester Gladiator fighter at St John's Chapel.
The Anglican League operating out of Wolsingham have likewise turned the showground into a makeshift landing ground where the Bishop of Durham's Hawker Fury is based, although it usually to be found flying from the (safer) grounds of the Bishop's palace in West Auckland.
The Shildon Railwaymen are operating an old Russian I-1 fighter off an 'airstrip' located next to the Wagon Works. They also use this landing strip to accomodate aircraft shuttling across the pennines to the Liverpool Free State.
Pictured above are the Hawker Fury being stalked by the BUF Bulldog, who in turn is about to get a nasty surprise from the Socialist I-1. The last photo is of my Heyford heavy bomber. I've just taken delivery of a Tiger Moth and am waiting for a couple of other kits to arrive - not for quantity but for variety........honest! Now to find something to mount the Heyford on.....
Posted by Colin Ashton at 1:35 pm