Suvarov in the Alps: Game 1

Yesterday saw the first outing for my French and Russian 1799 armies. Conrad had returned an army corps-worth of 1866 Prussians that had been on loan so it seemed like a good opportunity for a game. We played down the length of the table, with my new 'Alpine Peaks' and 'Devil's Bridge' in the centre, crossing a largely impassable river. The Russian objective was to capture and cross the bridge, drive off the French and be in a position to exit the north table edge.

The Russians army was made up of a battalion of Jager (in two small units), four battalions of combined grenadiers, one battalion of fusiliers and four battalions of musketeers, supported by a battery of artillery and a bunch of Cossacks. There was also the remote chance of a brigade of Austrian cheveau-leger appearing as a flanking force. Facing them were (as it happens) too many French. On the wrong side of the river was a small ad-hoc brigade made up of a battalion of French legere, and a battalion each of the Polish and Helvetic Legions, the latter being a 'large' unit. Due to arrive from the North and East were two further demi-brigades of infantry (11 more battalions!), two batteries of artillery and a weak brigade of chasseurs a cheval.

The Russian commanders were generally above average, and Suvarov and Bagration were given a rating of 9. The infantry were also much harder than their enemies as I made them tough fighters and stubborn but they had no first fire. The French were broadly average with the exception of one demo-brigade which was rated veteran and had slightly better stats than their mates. 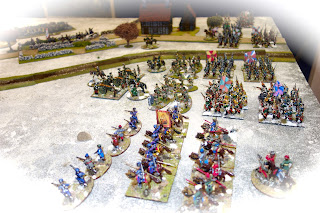 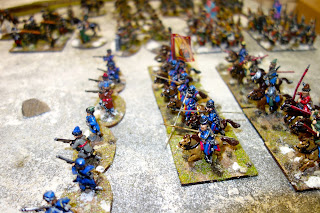 Cossacks!!!! Suvarov dismounted many of his Cossacks and gave their ponies to the artillery and supply train. 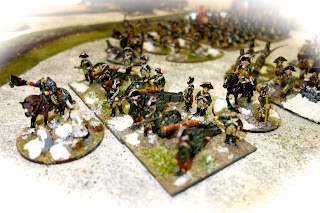 Russian artillery. In reality these should have been ex-Piedmontese mountain guns but they are as yet incomplete still on painting table as I need some pack ponies to finish the battery. 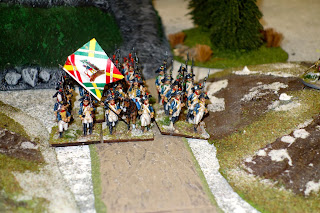 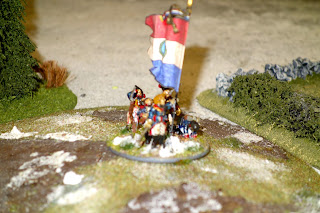 The commander of the French advance guard. 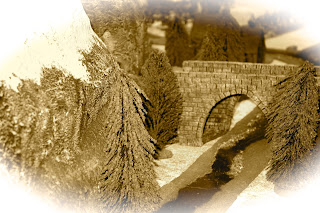 As the Russians entered the table the exposed French brigade to their front  deployed to hold them for as long as possible. 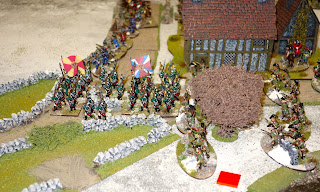 The Russian advance guard, made up of elite grenadiers and jager engage the French but are momentarily held up. 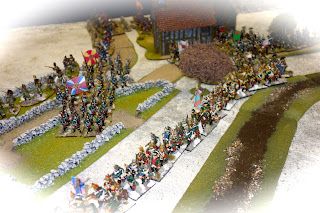 More Russians appear and march around the French flank. 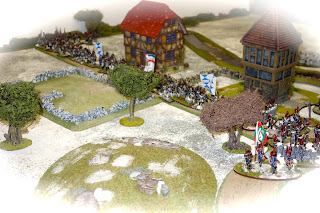 The Russians were taking their time getting rid of the French delaying force, allowing Gazan's and Molitor's demi-brigades time to arrive.

The Polish Legion had been driven off with ease but the Helvetic Legion held up the Russians for four rounds of melee before they were taken in the flank and destroyed along with the remainder of their demi-brigade. 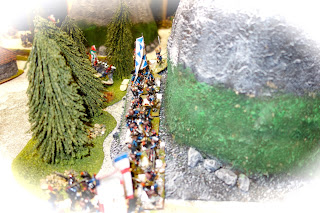 Gaza's infantry marching up the mountain pass towards the bridge. 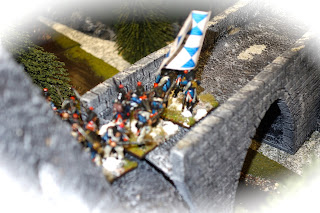 They deployed (if deployed is the right word) at their end of the bridge. 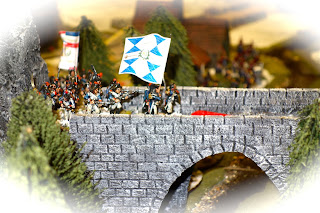 They took fire from Russian musketeers posted on the opposite side of the river and while ineffective, it did disorder them. 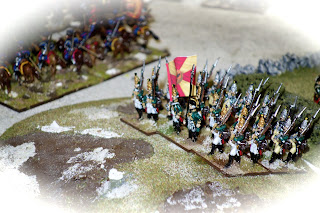 Russian grenadiers poised to assault over the bridge. 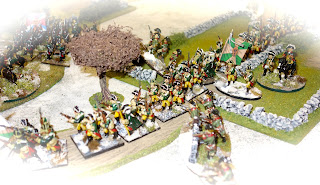 ....and the Russian reserve marches on. 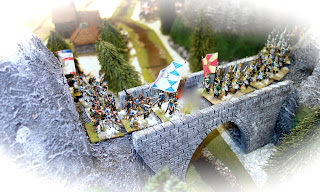 The Russians climb their side of the mountain track and charge across the bridge, destroying the French defenders immediately. The supporting French passed their break test but were driven off and broken but another Russian bayonet charge. 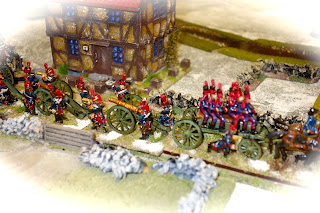 The French horse artillery arrives.  I must get the limbers finished but I was focussed on getting the wurst wagon done! 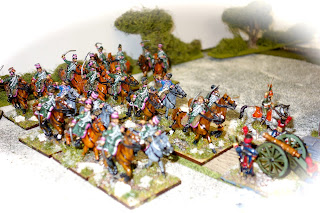 French chasseurs a cheval arriving at the tail end of the column.

The French and Russians battle for control of the alpine track leading off the bridge. 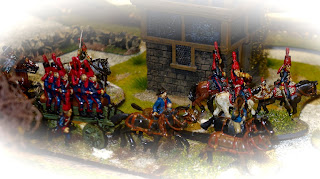 The horse artillery wurst wagon and the battery commander. 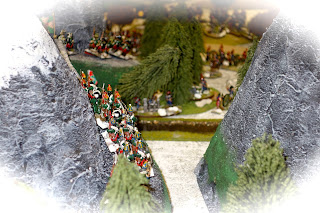 Russian reinforcements wending their way up the track towards the bridge. 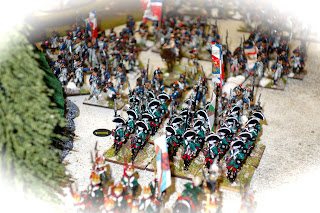 On the right flank the Russians had attempted to the only other crossing place on the river, a small ford, but were beaten to it by a larger force of French and first halted then driven back, with heavy losses on both sides. The Russian artillery prevented the French from exploiting the withdrawal. 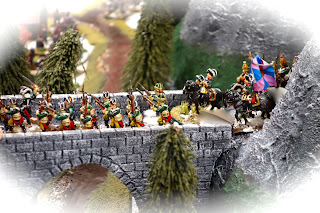 The Russian's final attempt to clear the bridge ground to a halt as losses mounted and battalions were forced to retreat. 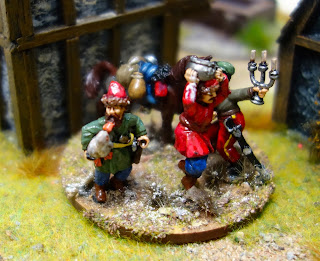 The Cossacks gave up the fight (not that they actually did much anyway) and started looting the village. 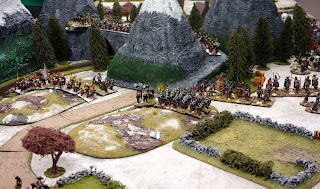 I enjoyed the game as did Conrad. We whistled through it and managed 16 turns between 11:00 and 3:30 which is pretty impressive. We both agreed that the Russians had been trounced and that they were in no position to continue their valiant attempt to cross the river. On reflection, I got the timings wrong for the arrival of the French reinforcements, and once they were all on the odds were stacked against the outnumbered Russians, so they really never had a chance, especially as they were delayed for so long by the French advance guard. The Russian flanking move never materialised so the Austrian chevau-leger brigade that was expected to appear on the French flank clearly got lost or were distracted by the von Trapp family and joined their singalong! Where the rules didn't quite work we just made it up as we went along. For example, troops in march column don't fight very well but how were they to fight their way over the bridge? We decided that although the figures might look like they were march column they were in fact in an attack column while they occupied the mountain features. That worked well enough. I also used three models to represent each battery, and each model had the usual 3/2/1 dice so there was the potential for some serious bloodshed. Thankfully this never happened and the artillery, while quite deadly, wasn't too powerful, in this game at least!

Tomorrow Robbie is coming up for a game so all I have to do is re-set the figures and so forth and print out some new Orbats. With a few less Frenchmen included which is a shame but I did get everything battle ready on the table yesterday, part from the Austrian cavalry who OUGHT to have arrived!