The final game before Christmas and at last a Russian victory!!! Hurrah!

As mentioned in my post earlier this week, Paul came up today for a game. I'd decided to re-set the table and tinker with the orders of battle slightly and have another attempt with my French Revolutionary War French and Russians stomping around the Alps, and to use the terrain before I have to find somewhere to put it! The only changes to the Russian orbat was the merger of two small brigades into a larger and hopefully more robust one. The French were given their foot artillery battery. I also made the river easier to cross in certain points, it still taking a whole move to get from one bank to the other. The little 'hills' were also classed as rough ground as they were representing loose scree-covered slopes. Anyway, to battle.

Paul deployed the French with two brigades on the right, the cavalry in the centre with another brigade, and the last brigade on his left. The horse artillery were deployed en-masse in the centre while the foot battery was split between the two wings. I had a fiendish plan and deployed my Cossacks and Austrian cavalry to the left of the 'Devil's Bridge'. My main infantry brigade and lone artillery battery were deployed in the centre, my intention being to push the infantry across the river as quickly as possible supported by the guns. Both (small) brigades of converged grenadiers and jager were on my right, ready to swoop over the river, occupy the village and turn Paul's flank. A great plan. Essentially the same plan that had gone wonderfully t*ts up on the last two attempts! 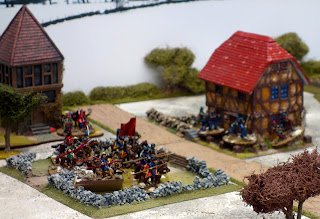 The Cossacks rush forward to secure the village area on the extreme left flank. Paul tried to quickly shift the troops on his right back to the centre but one brigade refused to move for several moves and became embroiled in a fire fight with the Cossacks. 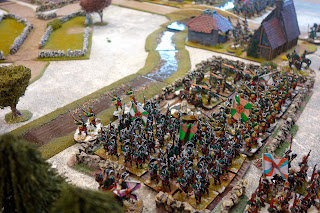 The Russians massed in the centre ready to assault across the river. Well they would if were not for some poor command rolls and frequent hits causing disorder!

A large gap in the French centre. Paul was rushing a brigade from the right to plug the gap. 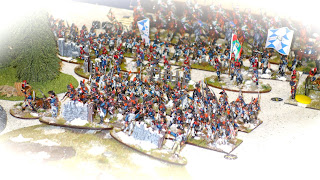 While French infantry rush from the flank to bolster the centre, the French combined grenadiers advance to cover the movement. 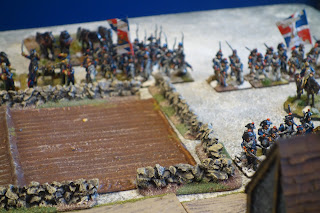 On the French left infantry advance towards the village which had been quickly occupied by a battalion of Russian jager. Behind the eager were four battalions of Russian grenadiers.

The grenadiers charged into the French ranks and broke them. The French supports were also swept away in the rout. 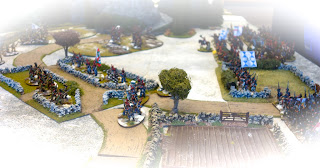 In the centre the Russian jager were fighting a loosing battle against two battalions of French light infantry.  The French were eventually driven away by advancing Russian columns but not before the jager battalion was destroyed. 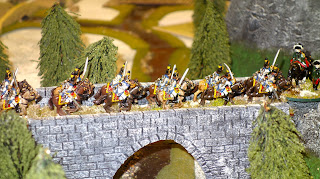 I finally got the Austrian cavalry to move using a 'follow me' order. They then failed every subsequent order and remained on the bridge until the end of the game. 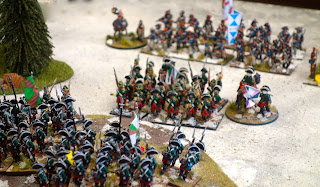 In the centre the Russians had crossed the river in force, and although they were taking casualties from the french horse artillery battery managed to drive off both French grenadier battalions, thanks to an unusual and unfortunate run of dreadful dice score that plagued Paul for the entire game. 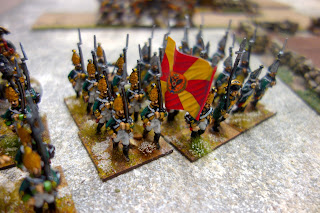 Russian combined grenadiers advancing on the right. They were successful in driving off five french battalions facing them after quite a tough fight, although it must be said that one of the more resilient demi-brigades was classed as 'newly raised'. 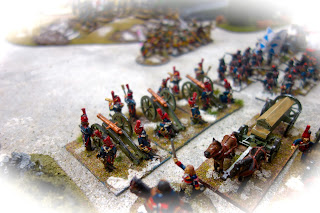 In the centre the French horse artillery continued to pound the slowly advancing Russians, but without much success. 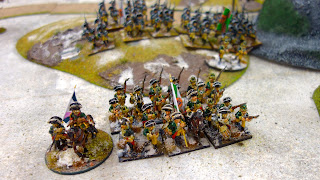 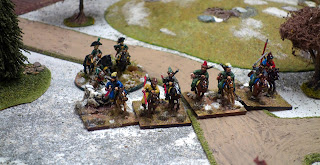 I had moved my Cossacks to screen the Austrian cavalry from French artillery fire while they made their way over the bridge, which I am sure they would appreciated for such a noble cause. I had to move my C-in C to quickly rally them having overlooked the fact that this would save the Cossacks from running away but would also take him away from the centre where he had been stiring his troops on with a couple of 'follow me' orders and furious bayonet charges. 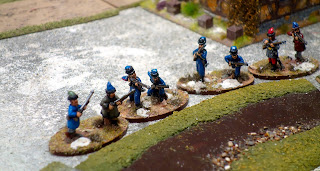 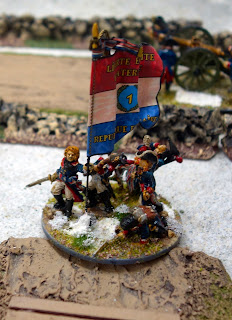 The French commander of the right wing, urging his men on! 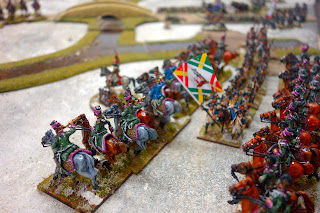 The Helvetic Legion making the move from the right to the centre between the ranks of their cavalry. They were too late sadly as the left had collapsed and the centre was on the verge of caving in.

At that point Paul said that he was going to retreat and concede defeat. The French had taken quite a battering, as had the Russians, but I am glad to say that, third time lucky, I was pleased with the Russian performance, especially as they were outnumbered 2:1 in artillery and 3:2 in foot. I might however have made them a little too tough and am going to revisit the stats for both sides and try and adjust them rather than having lots of little 'special' rules, e.g. I make the Russians 'Stubborn' but a re-roll every time they are shot at can be frustrating and perhaps a little too much. Instead I shall give them an extra stamina point.

Anyway, I hope Paul enjoyed the game even if he did get hammered. I did as its a while since I won a game, not that winning bothers me much.....honest. No more games now till after Christmas when I am hoping to set something up on 29 December.

Merry Christmas to you all and I hope 2017 brings us all a wonderful year of enjoying our fantastic hobby.
SaveSave
By Colin Ashton - December 21, 2016