Conrad, Paul S and Dave were here today to fight the next action in my French Revolutionary War mini-campaign. As mentioned in the previous post, the English forces had withdrawn after their bloody nose at Le Croisic to outside the village of Pouliguen at the eastern end of the bay used to disembark their forces only five days earlier.

The Republicans had moved quickly and brought together a strong force to drive the English back onto their main supply depot and harbour at Pornichet. Loss of this town would doom the expedition to failure so almost the last reinforcements available to the English were rushed up to join the battered brigade now commanded by General the Earl of Chatham.

Dave and I were the English while Conrad and Paul were the Republican French. We randomised command levels at the start of the game and everyone managed to throw really low as can be seen by the numbers below.

The Republicans had been able to muster a sizeable force to take on the English, as follows:

The English had to survive the battle without loosing the roads off to the west on their base line. The French aim was to capture the roads (leading to Pouliguen and Pornichet) and be in a fit state to move on the English supply depot. 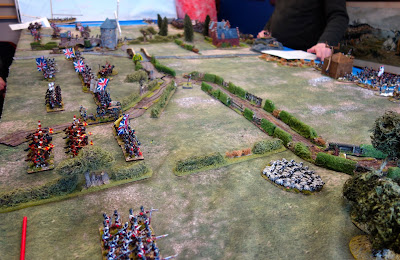 The English deployed with their weakest brigade between the sea and the windmill, supported by two squadrons of the 19th Light Dragoons. Moore's brigade held the centre supported by the remainder of the cavalry while the flank battalions were positioned close to the church on the extreme right. The French deployed all their artillery, cavalry and decent infantry on their right. They refused the centre and the remaining eleven battalions entered the table on their left, opposite the churchyard. 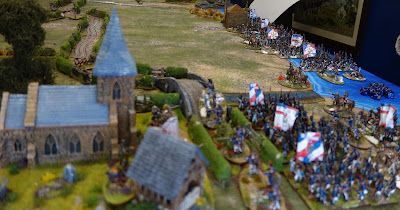 The leading French battalions immediately tried to occupy the churchyard, which was held by a few hundred local Chouan. The latter held for a couple of moves before being driven out. But they had gained valuable time.

A mass of French artillery and horsemen advancing along the shoreline with a Garde Nationale battalion and a demi-brigade legere following in their wake. It was all aimed right at Dave who commanded this flank. 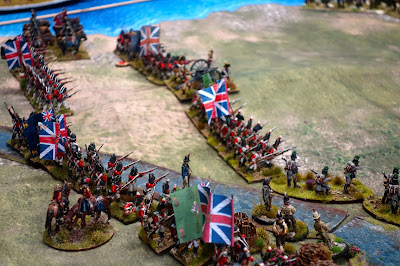 The two battalions of HM 5th Foot and the three of HM 4th Foot had been severely battered at Le Croisic so their saving rolls had been modified to 5+. Lowenstein's chasseurs were fresh, as were the 19th Light Dragoons. 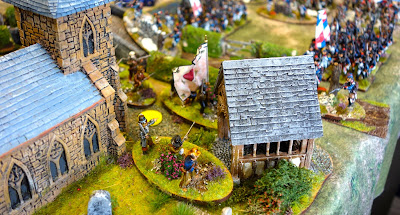 At the church the Chouan held on valiantly and even forced one attacking column to withdraw! 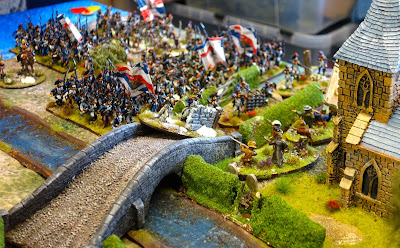 Eventually sheer numbers began to tell and the Chouan were driven off, but not destroyed. 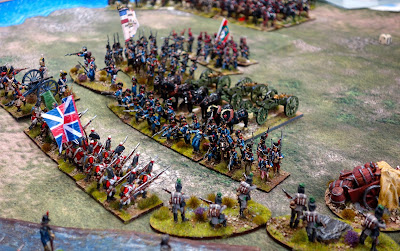 Paul ordered his infantry and artillery forward, perhaps a little too far, as they finished their move right under the noses of the English at point blank range!

The French horse artillery galloped forward through the surf and deployed on the shoreline, covering the advance of their cavalry. Sadly, the commander of the cavalry was wounded and the horsemen were left leaderless (and motionless) for a turn. The horse artillery caused significant damage on the English, especially 3/4th Foot who were forced to retire. 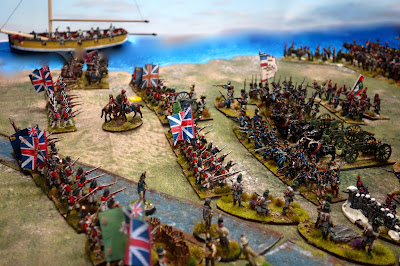 Another view of the English left. 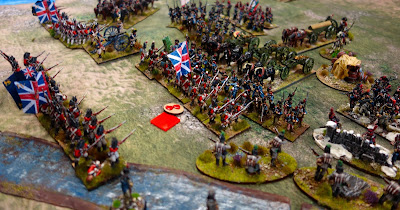 For reasons best known to himself Dave decided to charge the French light battalion to his front rather than blast them at point blank range.

Predictably perhaps, the closing fire from this half decent Republican battalion was devastating, and the English were disordered and took two hits before taking another in the melee. They still succeeded in shaking the French and forced them to retreat, leaving themselves right in front of a battery of six 8pdrs. Ooops! David!!!! 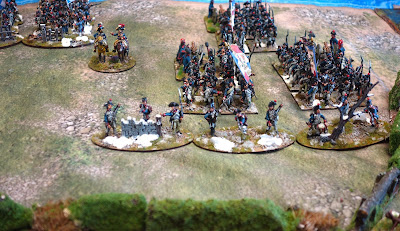 Poor Conrad had been struggling to get his eleven battalions to move, but eventually they started trundling forward. 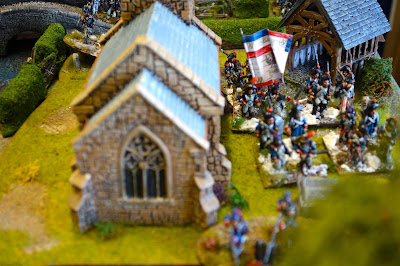 The Republicans in the churchyard were forced to retreat when they came under fire from one of the English flank battalions. 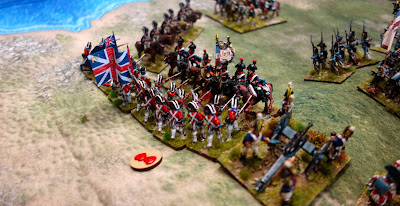 Paul ordered his cavalry to charge. First they hit a squadron of the 19th LD, forcing them to retire. A sweeping advance took them straight at a battalion of HM 4th Foot. As it was a sweeping advance they could not deliver closing fire and I also reckoned they were not going to be able to form square. Both their flanks were secure so this wasn't an issue for anyone. In the melee the infantry held and the cavalry bounced off and withdrew to lick their wounds. 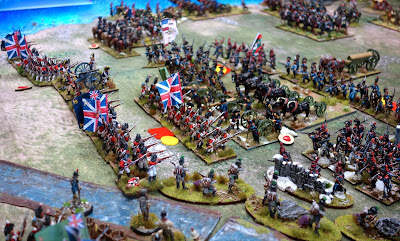 The Republican battery unlimbered and poured canister into HM 5th Foot. No surprise but they failed their break test and were destroyed. In the background the other squadron of the 19th LD can be seen in combat with French dragoons which they drove off easily. Shortly after this move, David's infantry brigade became spent and was forced to disengage as three out of the five battalions were broken or shaken. Not good.

However, a sweeping advance by the English cavalry thundered into the Republican horse artillery battery which was overrun and destroyed, its gunners sabred at the seaside.

Conrad's attack gained momentum and hit the English line, having survived closing fire. The 92nd Highlanders were pushed back but the flank battalion held their own, forcing their attackers to retreat. 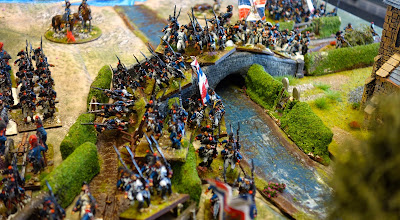 More and more Republicans were heading towards the English flank. Would the English be able to hold, outnumbered as they were by 2:1? 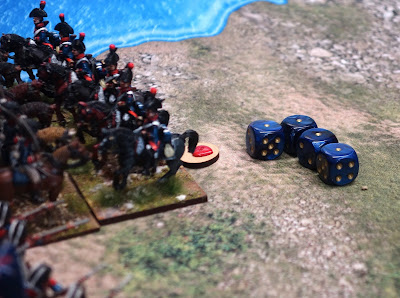 Back on the shoreline Paul ordered his cavalry to charge to withdrawing English light dragoons. His unit failed to score any hits, throwing four 1's! The 19th LD didn't miss and drove them off disordered. 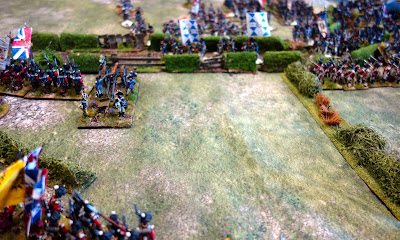 The victorious Republican battalion in the centre now came under point blank canister from the English 12pdrs but managed to hang on.

The flank battalion was fighting hard, and holding everything the Republicans could throw at it! 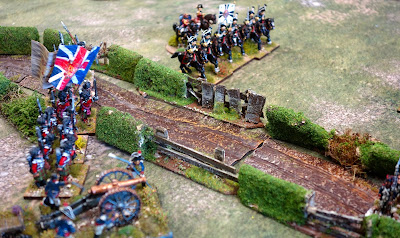 I carried out a 'follow me' order using Major General Assheton to lead the Chevalier Noble Dragoons over the hedgerows and into the flank of the advancing French, forcing them into square. 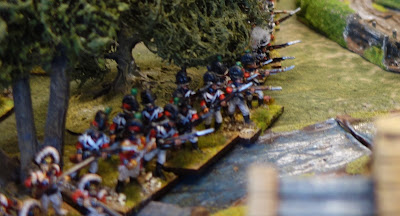 My other flank battalion was holding the woods and providing valuable support to the battalion to their left.

Conrad threw more troops at the English line but was unable to make any impression.

After the 'follow me' order Major-General Assheton was mortally wounded at the head of the Emigre Chevalier Noble Dragoons. The dragoons forced another republican battalion into square thus ensuring that the attack on this flank ground to a halt. Conrad's command collapsed having been exhausted by his attempts to break the English line.

The representative of the Committee of Public Safety consulting the notes of the interview and subsequent confession of the French commander which is going to take place soon.

The French right was still in relatively good order. The cavalry were badly cut up and half the artillery had been ridden down but the infantry had managed to drive off the defending English battalions.

At this point it was clear that although the English left was not far from a state of collapse, as the entire Republican left wing of over half their army had been destroyed as a fighting force that the battle was over. The English had succeeded in protecting their lines of communication to the depot, and despite heavy losses on the already battered brigade under Chatham the brigades of Moore and Coote were largely untouched and would be able to counter any move by the surviving Republican forces under Paul. I think we agreed it was a winning draw to the English, which is a fitting result to the final game to be played in Man Cave 5.

However, a few thoughts. Why David put more faith in the bayonet than in musketry I don't know. Given Paul's unexpected and accidental advance by his foot battery I suspect that the end result on that flank wouldn't have been different but I think the English commander of the left flank got carried away a bit in the excitement. Conrad had great difficulty getting his troops moving and I had dropped several hints that he could use his CinC to help out on that flank. As it was the CinC advanced with the Republican right and didn't issue single order throughout the battle. I also think that funnelling eleven battalions onto my extreme right wing wasn't the best of ideas, as there was a four foot gap in the Republican battle line which the English finally managed to exploit and get some cavalry into.

Anyway, it was a good game, a decent outcome, and everyone said they enjoyed themselves in what was a frustrating and demanding battle for us all. Not having any decent commanders was a big strain on both sides.

This is the final engagement to be played here. Services will resume in two or three week's time in the new mega man cave.
Posted by Colin Ashton at 5:29 pm