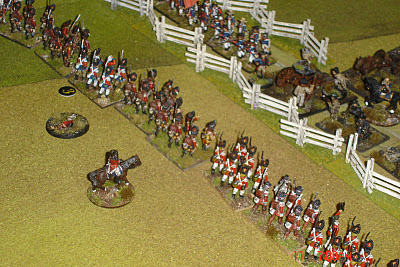 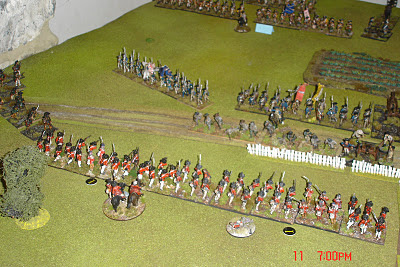 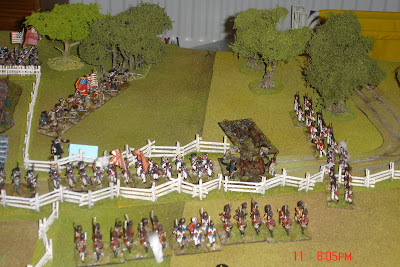 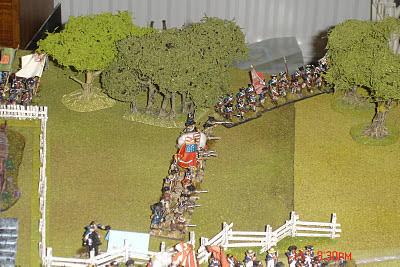 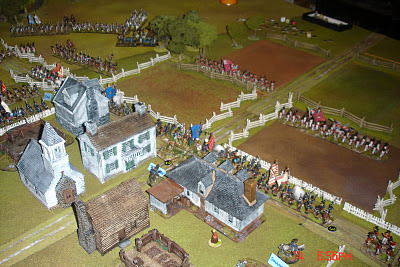 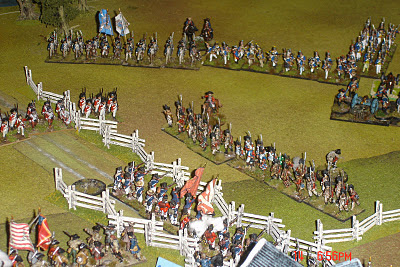 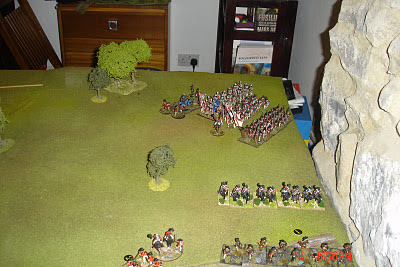 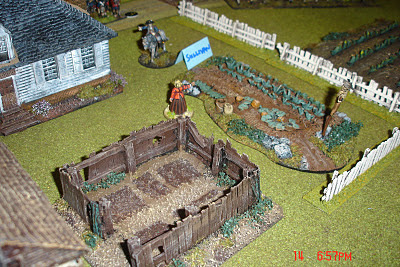 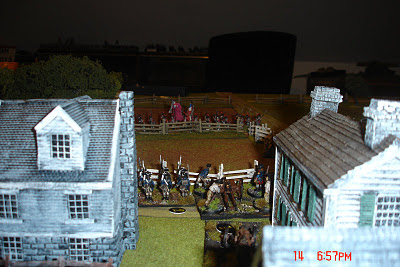 John and I started the Brandywine scenario that I've described in an earlier post on Monday evening. We diced for sides and I got the British. Although the British on the table at the start were significantly more superior troops compared to the more numerous rebels facing them this proved to be no walkover! My first turn saw the grenadier brigade march rapidly to within short range of the rebel line whilst the Guards and light infantry in the centre and on the left moved much more slowly due to poor command dice. We were playing the 'move more than once and you don't fire' amendment from LAoK so my grenadiers had to just stand there and take a significant level of musketry and cannon fire without being able to respond, which seemed about right. They survived, but not without losses to both battalions, one of which became disordered as well. The rebels spent their first turn rearranging a couple of brigades or doing nothing as they threw poor command dice as well (their generals were a pretty bad bunch).
The second turn saw the grenadiers hold their ground (they had to with one unit disordered) while the Guards and lights advanced, albeit slowly! Once in range the Guards brigade spent most of the evening in a state of disorder so were unable to advance on the rebel centre, although I suppose they gave them something to shoot at! The combined Guards light companies did charge a unit of rebel skirmishers but after a round or two of melee they failed a morale test dismally and routed! On the left my light brigade was making heavy going of seeing off the rebels on their flank, were taking some heavy losses and again John did keep on chucking 6's which kept throwing one or both of my light battalions into disorder. Some progress was being made however and one rebel unit was defeated after a heroic bayonet charge and others were halted due to being disordered through musketry. On the right, one of my grenadier battalions charged and drove off a rebel unit lining the fence and was able to swing round onto the rebel flank. Just in time a brigade of rebels was redeployed from the centre to plug the gap. My other grenadier battalion had become shaken through excessive losses but was just hanging on! Their gallant brigadier was also shot off his horse and was carried from the field mortally wounded, so the grenadiers spent a whole turn without a commander until someone else took over.
Meanwhile the British reinforcements finally made an appearence. The Hessian brigade arrived on the right and advanced very slowly towards the rear of my grenadiers (should have been three battalions of grenadiers but I only have two, hence the muskeeet battalion). Much too slowly for my liking but probably quite accurate as I seem to remember reading somewhere that the British thought the Hessians manoevered slowly compared to them. The brigade of British line infantry due to arrive at the same time on the left kept failing their command rolls so were two moves late in making an appearence onto the table.
On turn six George Washington arrived, heralding the likely arrival of fresh rebel troops redployed from the forces facing von Knyphausen across the Brandywine further to the rear of the rebel position. However, we decided to call it a day for the evening and come back to finish the game another day as I have the luxury of being able to leave everything set up.
I think the night had gone quite well and it was an enjoyable game, plagued by the usual rubbish command throws or getting disordered just at the wrong time! Black Powder worked well again and there is still a good chance that the British will fail to drive the rebels off the table and will therefore technically loose the game. Especially so if the rebel reinforcemets actually arrive. I think that had I not made the original six British battalions as tough as I had done they would have all routed by the end of the evening as it was only the special characteristics that saved them from doing so on more than one ocassion! I made them large, elite, steady and crack but they were the elite of the army so believe I am justified in doing so, and like I say, had I not then based on my dismal dice throwing, most of them would have run away before the evening was over!

Anyway, weather and everything else permitting we shall continue with part two in a couple of weeks time, after which I will set the table up to fight the other half of the battle.
By Colin Ashton - January 26, 2012