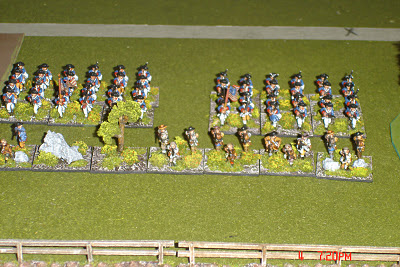 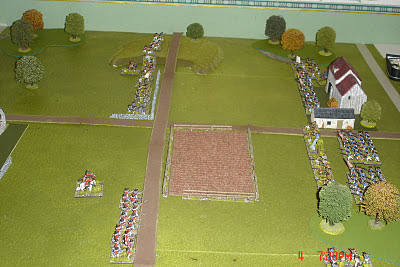 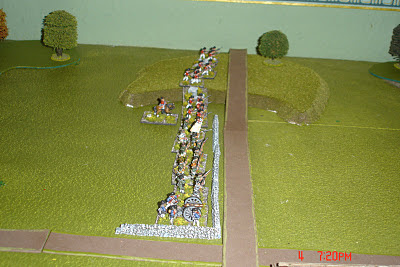 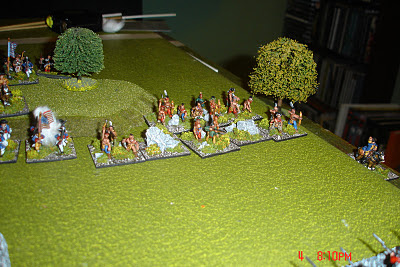 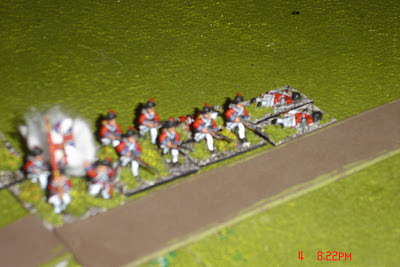 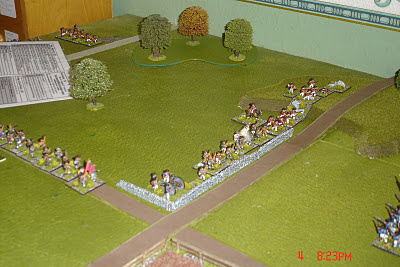 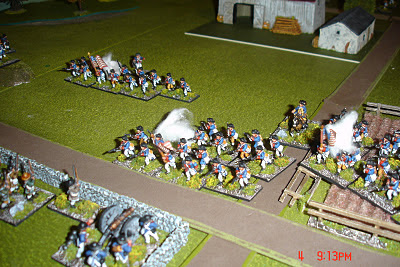 I braved the sub-zero temperatures last night and went down to John's to play an AWI game in 15mm using Peter Pig's Washington's Army rules. I was keen to see how the rules worked and was not to be disappointed either with the mechanics or the evening's game. I played the British who were to be on the defensive, holding a thin line across the board in the face of numerically superior rebel forces. After I deployed my troops I had to throw for 'depletion' - all of my units lost at least one stand and those hardest hit became my off table reserve as this was the only way of getting them back up to full strength again.
Johns rebels deployed and it looked like my thin line was going to get steamrollered but thankfully many of the rebels were militia and I managed to get my troops into good defensive positions, well mostly (sorry abouth that Guards btn!). The battle progressed well and I liked the command and motivation aspect of the rules as this did cause a problem for the rebels as they couldn't push on as fast as they'd have liked. It did for me a bit as well but as I was on the defensive it was less critical......sometimes. On the left my Light btn and a unit of New York loyalists supported by a gun held off many times their number for the whole game, although had we managed another turn I suspect I might have been driven off by a massively overwhelming bayonet charge by John's Continentals. In the centre I had a Guards btn exposed out in the open and another line btn holding a small farm area. The former held on until almost the end but by then they were down to under half strength and withdrawing. The garrison of the farm also fell back, although they had managed to deny the rebels access to it for much of the game. On the right my lone regular (but raw) batallion also did well but was about to be swamped by rebels and indians (and probably hit in the rear if the rebel flanking cavalry had made it onto the table). My reinforcements had little impact although had the game continued they were at least on the table and ready to plug the gaps (or at least try) before we had to call it a day. One highlight of the game was the considerable number of units on the rebel left trying to destroy my single British batallion when they could have been left alone or at best masked as there were no objectives to be gained by attacking them. A Hugomont moment as John said.
The outcome was a draw, and a close fought one at that, although another move or two would have seen the British struggle to hold the rebel attackers off. For once I was glad of my bad back and minus 6 temperature outside! I liked the rules as they were easy to pick up, the mechanics were straightforward enough and the game flowed very well. Very different to my usual AWI ruleset of choice (Black Powder) for my 28mm games but excelent nontheless. John's collection of 15mm Peter Pig figures is also very impressive and very nicely painted. Hopefully the photos will do them justice.
By Colin Ashton - January 17, 2012