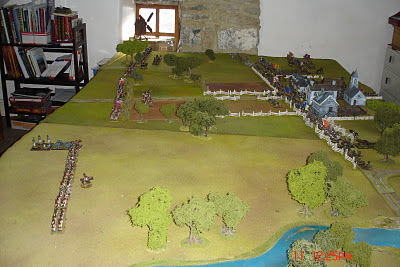 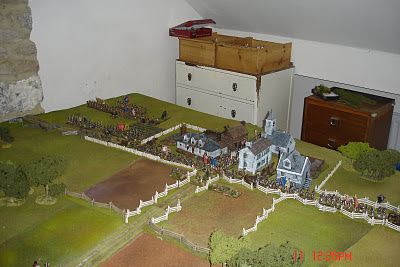 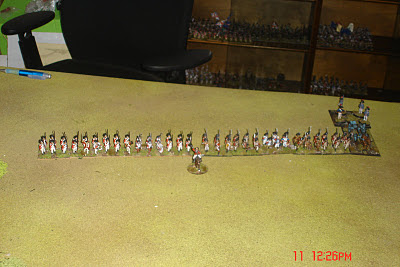 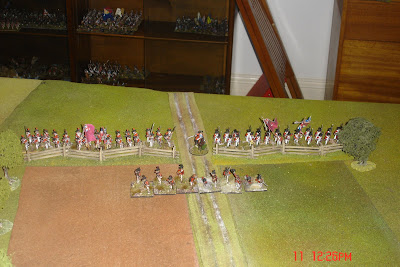 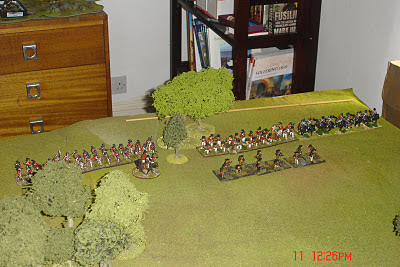 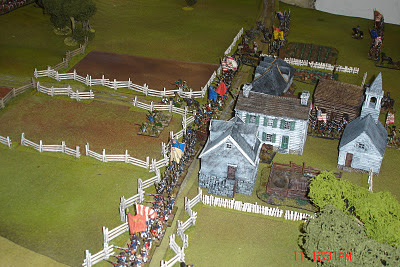 Assuming the weather doesn't turn later this afternoon John is coming up to fight Cornwallis' attack at the Battle of the Brandywine. Rob can't make it which is a shame but he's probably still trying to sort his new mega-games room sorted out!
The scenario is based on the one in the British Grenadier supplement but we'll be using Black Powder if only because they guarantee you a speedy game. I thought I'd get in the mood by putting some pictures up of the initial setup. If we don't get it finished this evening I plan to leave the game and return to it the next time John comes here for a game. I intend to reflight Knyphausen's battle at a later date.
The photos show the substantial rebel forces under General Sullivan hold a line in and around the village of Birmingham as well as each of the three brigades of infantry commanded by Earl Cornwallis, namely the lights, guards (yes, I know they didn't carry flags in America but I had them and they look nice) and the grenadiers. All tough troops but likely to be hard pressed against the more numerous rebels. Luckily, the British will get a brigade of Hessian Grenadiers and one of English line infantry as reinforcements fairly early on in the battle....with a bit of luck. I will post the after action report here later in the week as I am busy with work for a few days ;o(
By Colin Ashton - January 23, 2012