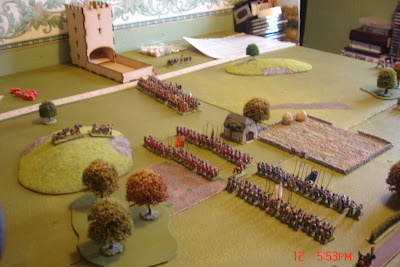 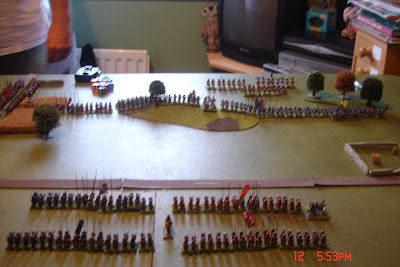 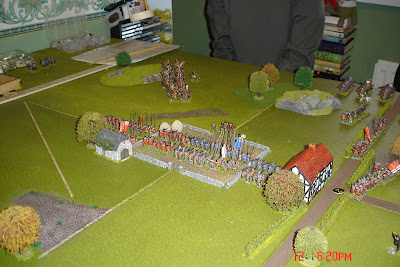 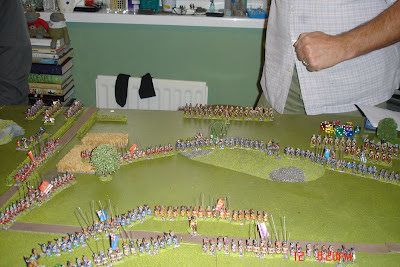 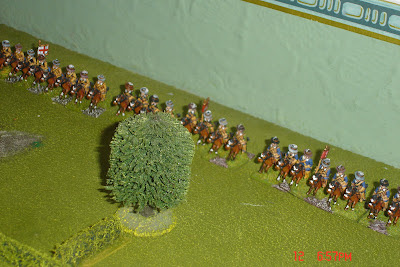 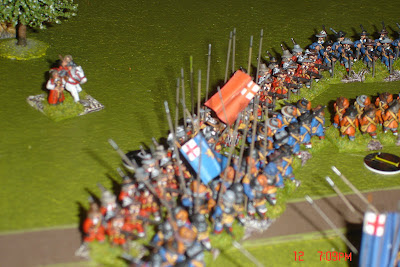 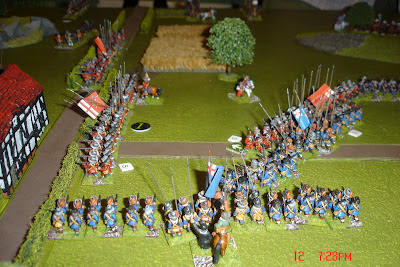 I had my initiation to Warlord Games' pike and Shotte rules this week. Went down to John's for a 15mm ECW game. I played the Roundheads while Rob tookm command of the Royalists. The Roundheads were more numerous but half of their infantry were untested so would have to take a morale test each time they received any casualties. I had a brigade of horse off table which would arrive randomly at some point in the game. Little did I know that so did the Royalists!
The Royalists deployed most of their army in one half of the table, so my plan was to hold their centre while outflanking them with my superior numbers of foot and horse. Great plan.....but as usual my troops took some moving as I was throwing really bad command dice, and the advance went in piecemeal. At least I made some progress with my Ironsides on the left but as the Royalists facing them withdrew I was never going to catch them. Early in teh game I decided to try and activate my off-table cavalry. I threw the required score and they appeared on the Royalist baseline! Great I thought.....not, as there were two brigades of Royalsit horse within striking distance, and on their next turn they charged into my statioary cavalry. My cuirassier unbit drove off their attackers but the one of the other units was driven off immediately and the other followed the next move. The cuirassiers lasted little longer and soon my whole bridge jhad been bundled back off the table, pursued by two regiments of Royalist horse. The only advantage I had gained was that all the Royalist horse was now carrying 1 if not 2 casualty points, so if I could get my fresh horse into contact......
Meanwhile my centre was buckling under the pressure from the entire Royalist foot while my other battalia of foot was struggling to swing round on the enemy flank. The Royalist reserve horse appeared on my right flank but thankfully Rob then forgot all about them for the rest of the game as he was contrating on dealing with my centre. The next couple of turns brought the battle to a close. The infantry in the centre closed to push of pike, my untried units didn't do very well and my good foor were being hammered. On the left, my Ironsides blundered so instead of launching a deadly charge into the Royalist rear, they decided to retire!!!!! On my right the horse and dragoons were making slow progress and my centre was about to give way, so after an enjoyable couple of hours I threw in the towel. John declared it to be a winning draw in favour of the Royalists, which was very kind. As usual, my plan hadn't survived the first throw of the dice, but I think the Royalists struggled, albeit successfully, to crush my centre before my flanks could engage.
Verdict - good game. Good rules that produced a fast and enjoyable game. I even got the hang of a 'regiment' of foot actually being 3 units for command purposes in the game. The figures were as ever very nicely painted by John and I should not have had that second Tunnocks chocolate marshmallow teacake!
By Colin Ashton - August 24, 2012