Blast from the past - The Flashing Blade 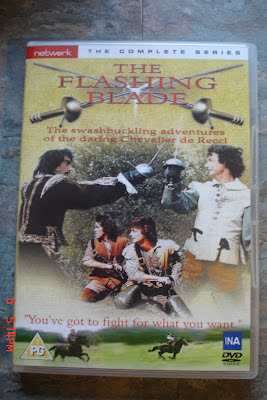 I picked this DVD up recently, having been an avid fan of the series back in the late 1960s first broadcast on the BBC in around 1968/9 and I remember being glued to the TV each week. I watched every episode laast week and while the acting is somewhat OTT it was enjoyable to watch with much slapping of thighs, swordplay and suchlike.
I've not had much opportunity for gaming or even painting over the summer for various reasons, although I have managed to glue together all my new Thirty Years War Warlord plastic figures, and have made a start on some Imperial Cuirassiers and Swedish Horse. I hope to get them finished by the close of the weekend.
Off to John's this evening to play an ECW game using Pike and Shotte which will be my first exposure to the rules.
By Colin Ashton - August 23, 2012