I've been keen to get my Crimean collection on the table again for a while so when Conrad asked to come up for a game I thought it'd be a perfect opportunity, knowing how much he likes gaming 19thC conflicts.

Now as we all know, the Crimean War (or at least the bit actually in the Crimea) is lacking in large numbers of battles to refight, but does that matter when you consider the command and control problems to be faced by all the armies involved, the effect of new(er) technologies on old tactics (e.g. Minee rifles vs assault column) and the glorious uniforms (ok, except for the Russians and Turks)? Of course not!

Anyway, I recently rediscovered my copy of  "Scenarios for All Ages" by Charles S Grant and Stuart Asquith. One of the scenarios sets the scene for an assault across a river while a flanking attack goes in further upstream. The attackers are restricted by limited crossing points and don't have a significant numerical superiority. The scenario is of course loosely based on the crossing of the Boyne, which in this game has been transported several hundred miles to the east and 165 years into the future.

Infantry battalions were all 24 figures strong. The Russian rifle detachment was represented by a small unit of 12 skirmishers. The British cavalry were represented by small units/squadrons of 6 figures. The Russian and Turkish cavalry units were all 12 figures. Allied artillery were represented by a single gun model and crew. My Turkish cavalry were finished and ready for the table but as I'd not blunted the lances, for health and safety reasons they were substituted by a regiment of less hazardous French Chasseurs d'Afrique! The Russian artillery establishment of the time was for 12-gun batteries. An infantry division had four of these batteries attached! I represented these by 2 gun models and crews, effectively a 'double' battery. However, while they had the advantage of twice as many 'shots' per  turn they weren't allowed to split their fire and as they are clearly a 'large' unit their stamina was set at '4' for the pair of guns in a 'heavy' battery and '3' for medium and horse batteries. Morale saves were 4+. My thinking behind this was that that the bigger Russian batteries should be pretty dangerous but hampered by poor command and control they may not be the dominant feature on the table given that they could be outshot at longer ranges by Minee-armed British troops.

The river was fordable around the whole curve of the big bend but at reduced speed. It was possibly crossable on a score of 5 or 6 on 1D6 for each section, except at the bridge where it was too deep, crossing only being possible in march column across a very long bridge. The marsh slowed movement and the cultivated areas blocked line of sight. The main village with the church was class '3' i.e. very tough. The other village was a '2'.

We threw for sides and randomised the command levels. Conrad got the Allies. I have yet to play in command of the Allied troops but was ok about that as I have become quite used to how to handle the Russians.....a least in theory.

The Russians began off table. Most of their army appeared in turn 1, but very slowly. Conspicuous by their tardiness were the ALL artillery and half of the flanking force. Hey ho! 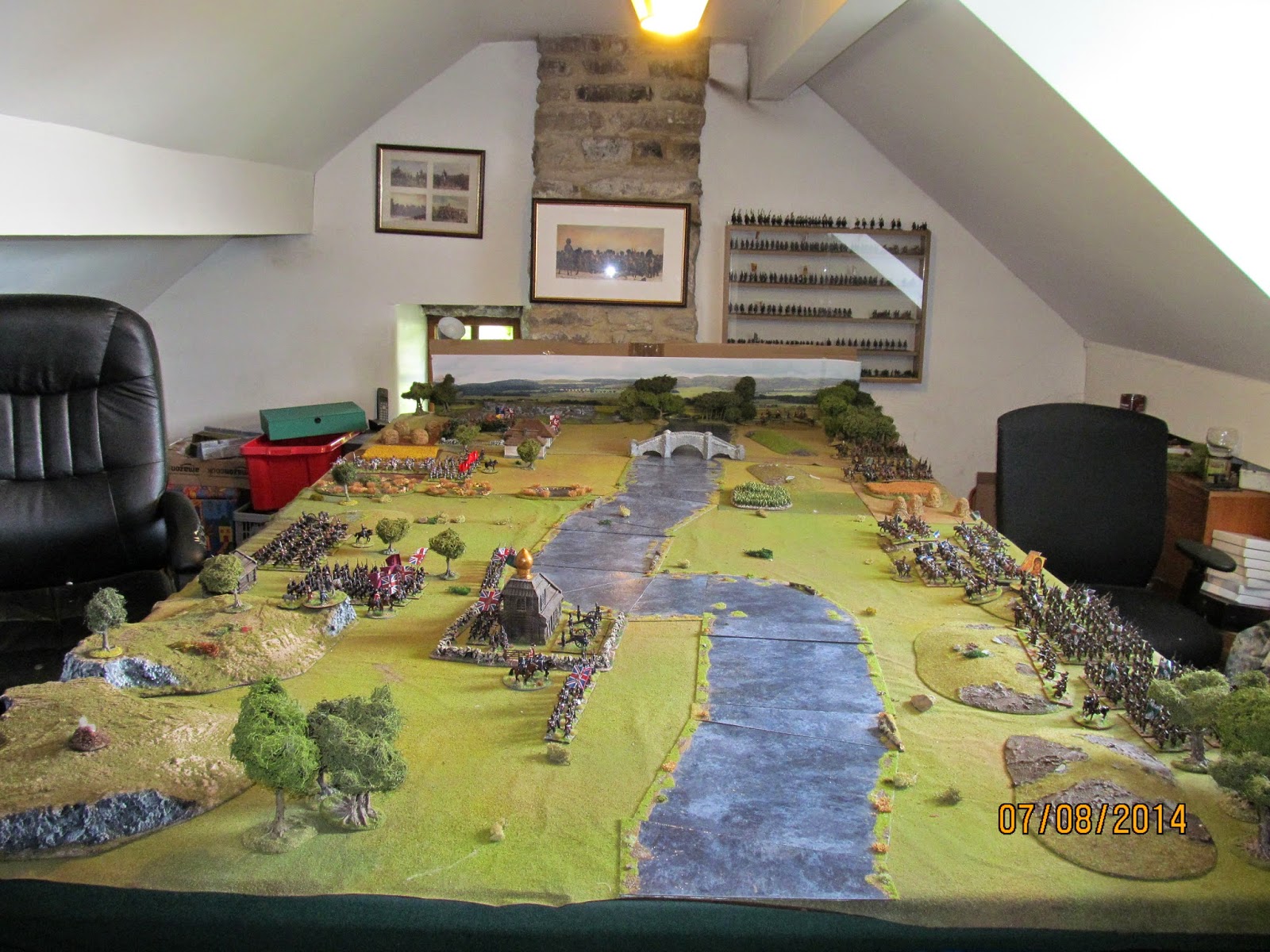 (Above, the Russians, or some of them at least, begin their advance while below HM 23rd Foot and the Royal Artillery prepare to defend the village of Staryymoct). 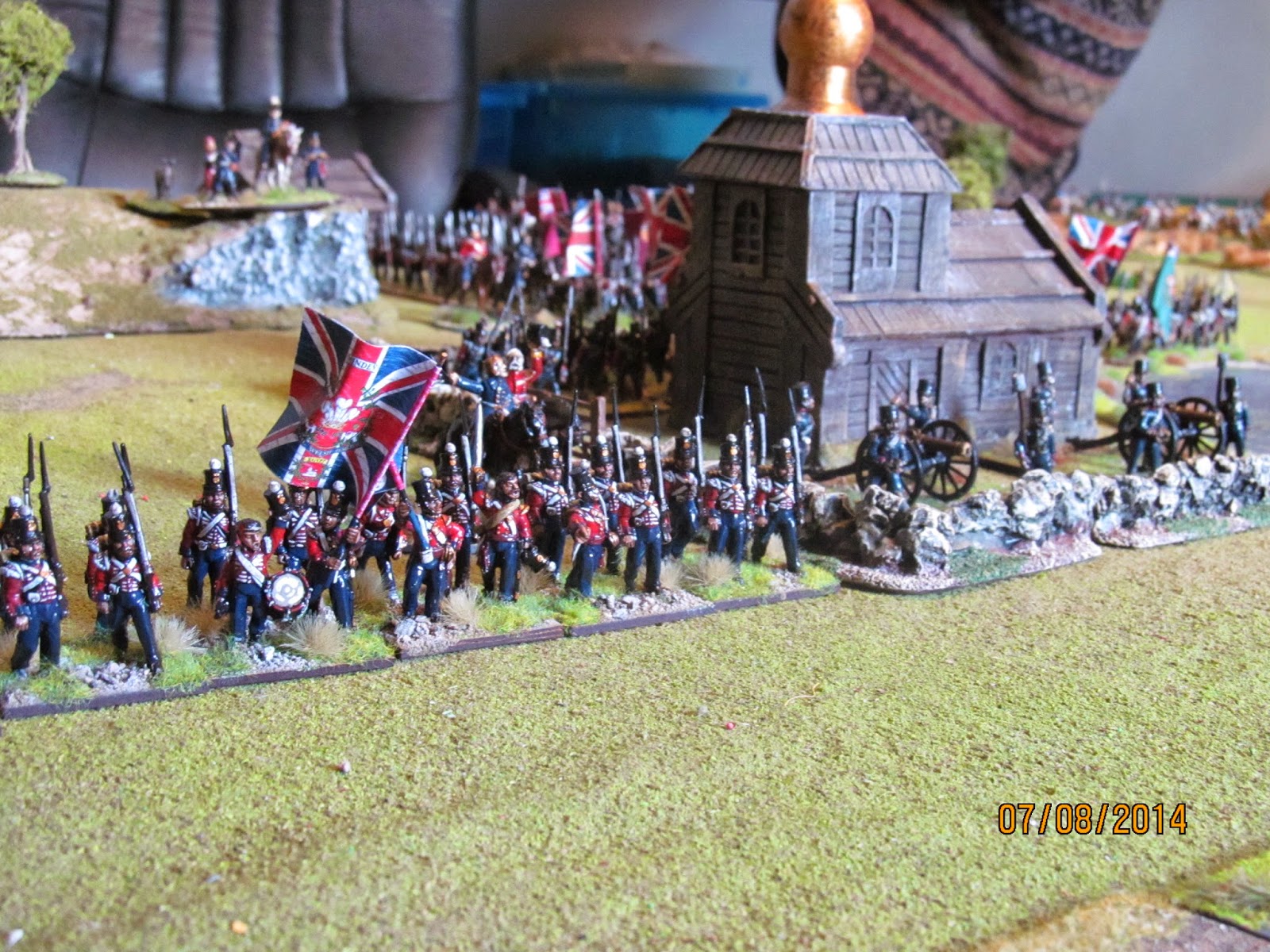 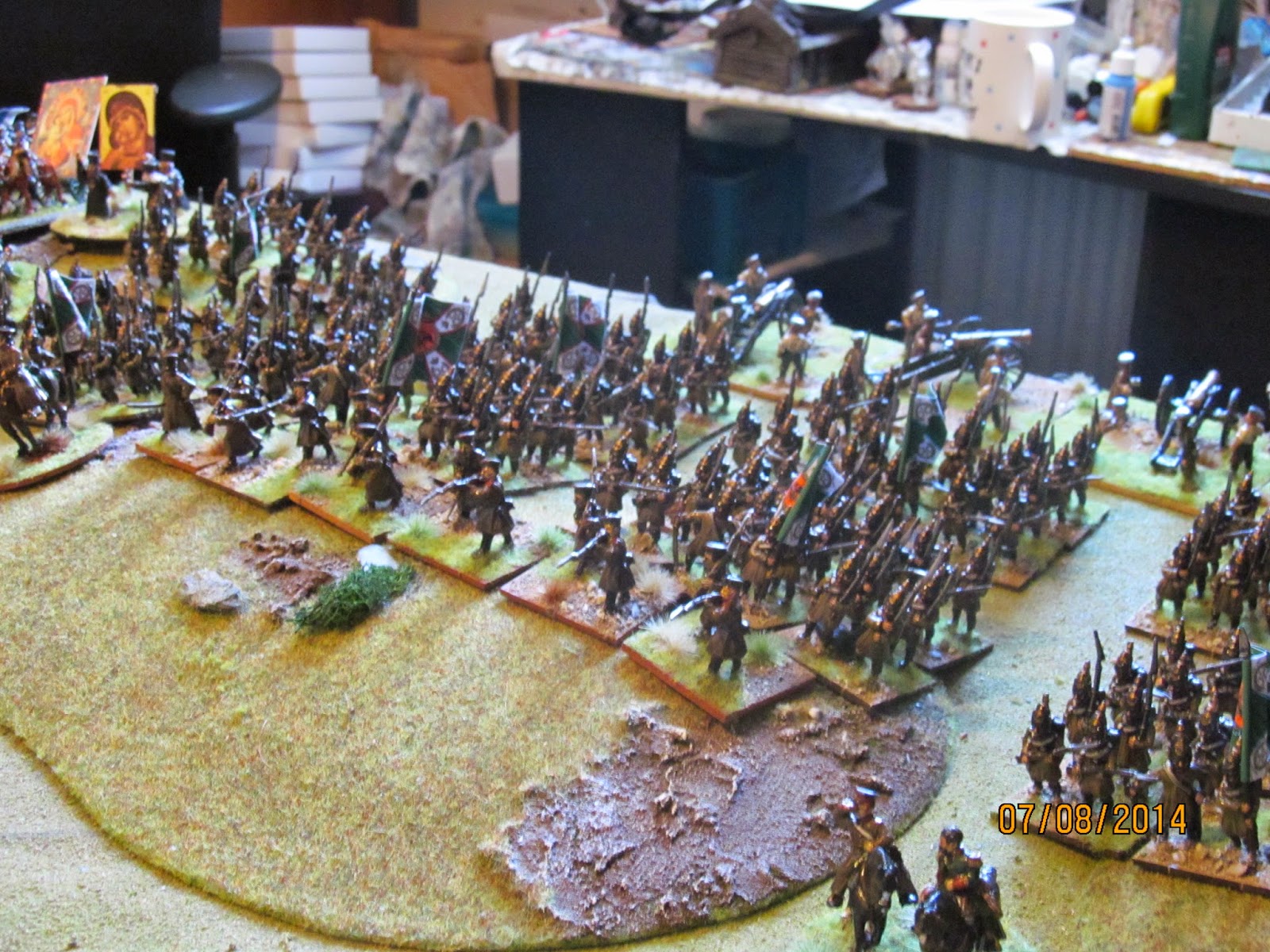 (Above, the Russian left crest the hill to the front of the British while below the Brigade of Guards and the Heavy Brigade wait in reserve). 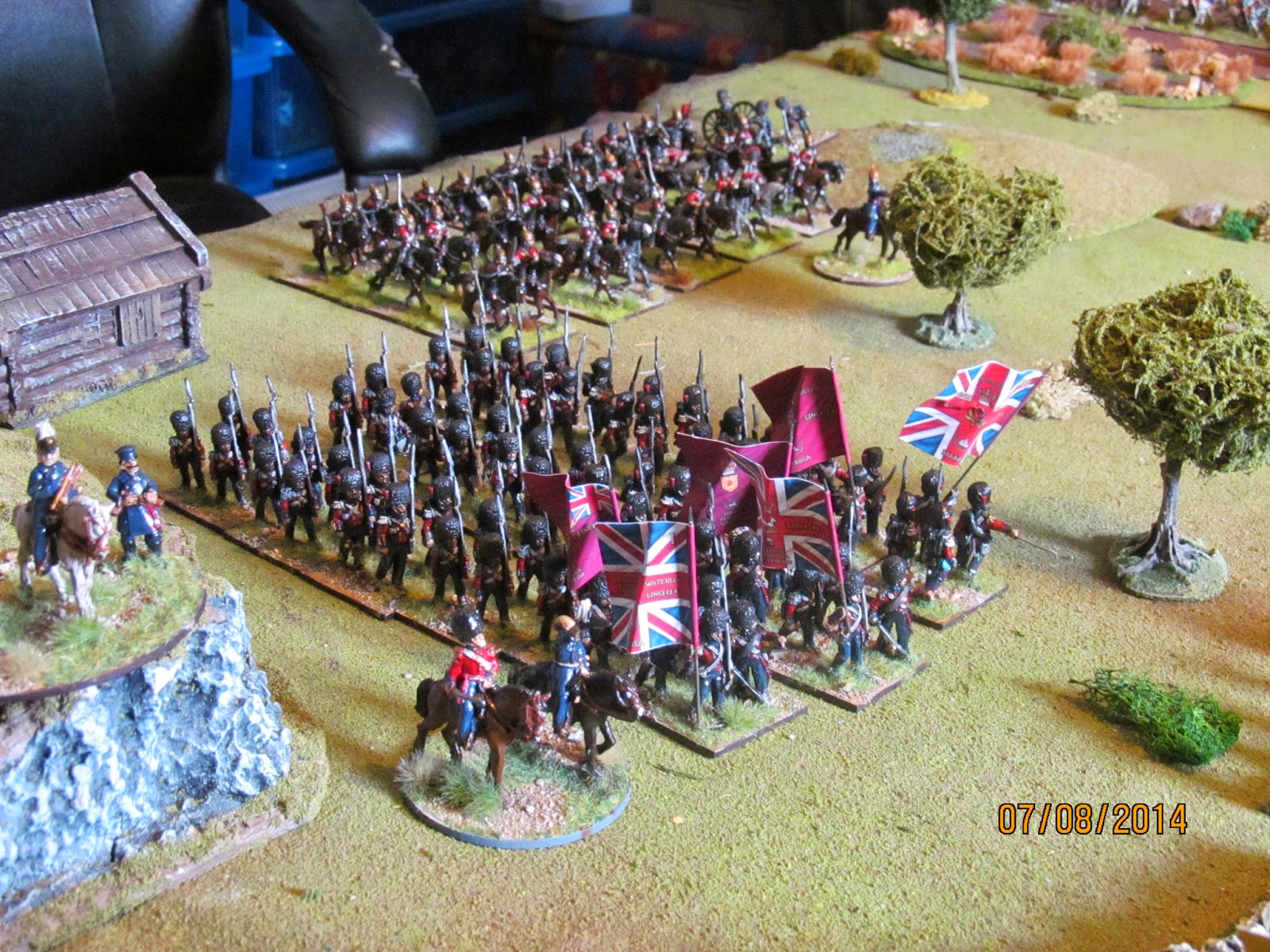 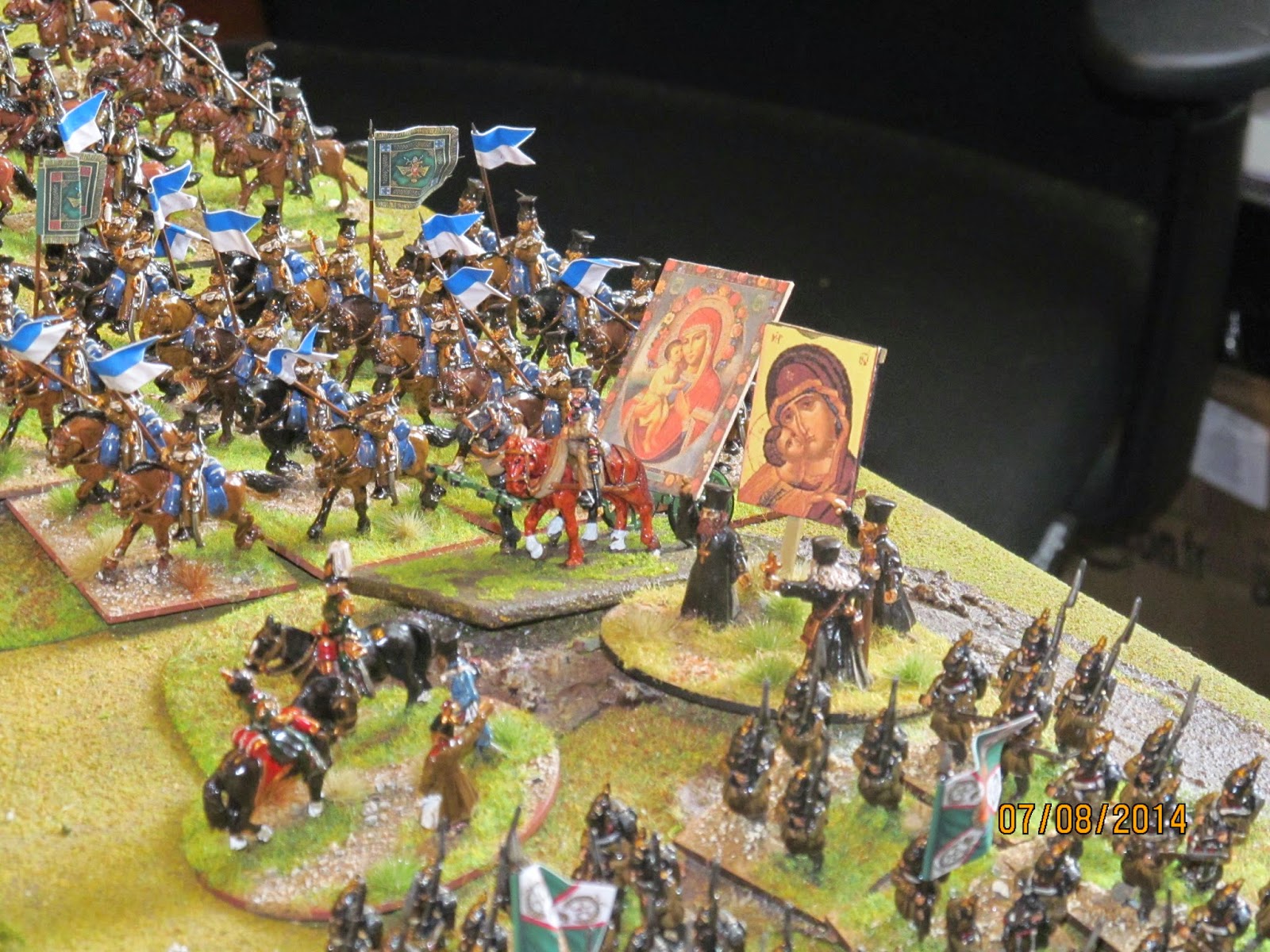 (Above, Russian Orthodox priests. I give the Russians a re-roll on a break test if they're within 12" of this group. Below, the Russian right). 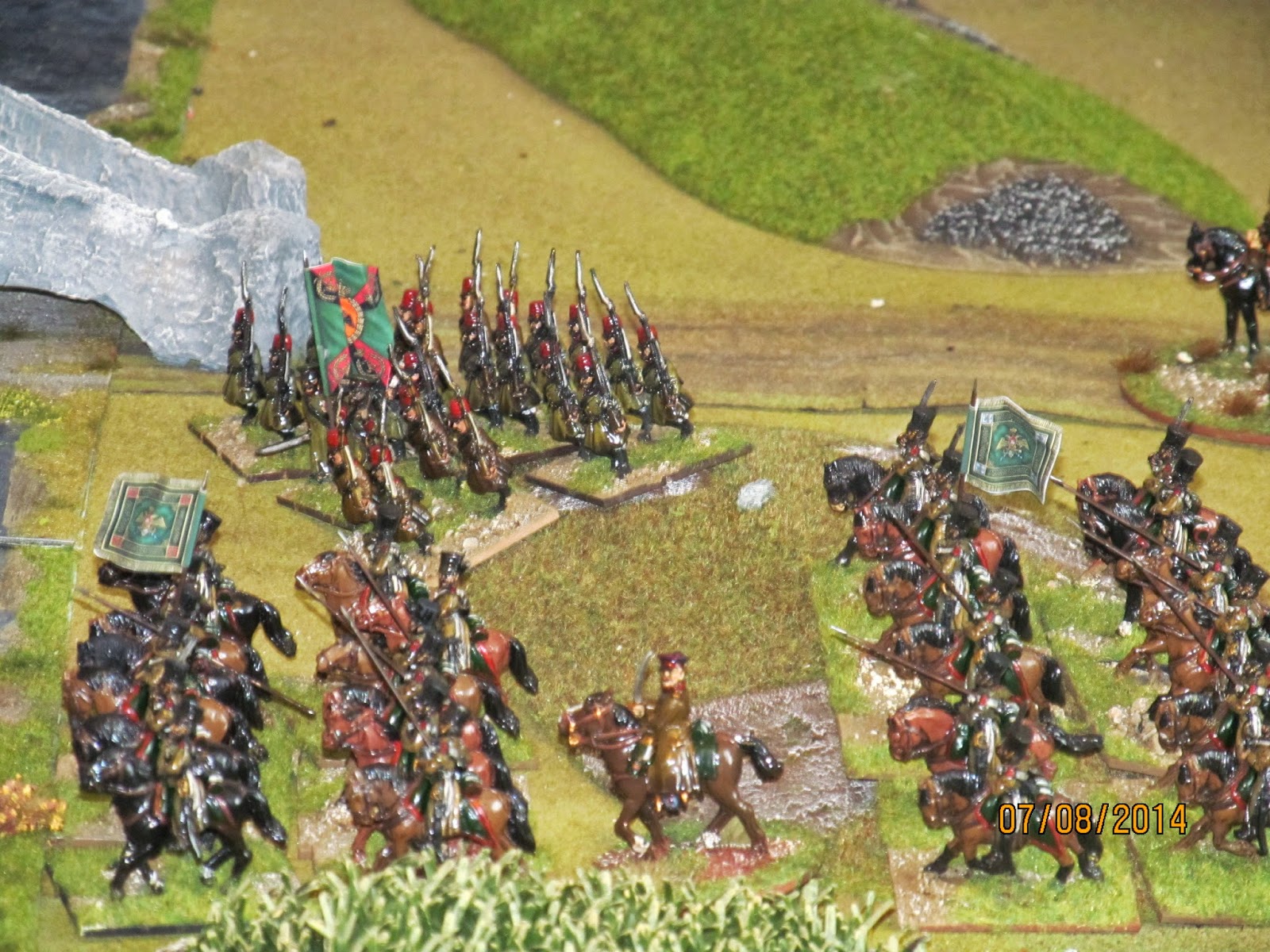 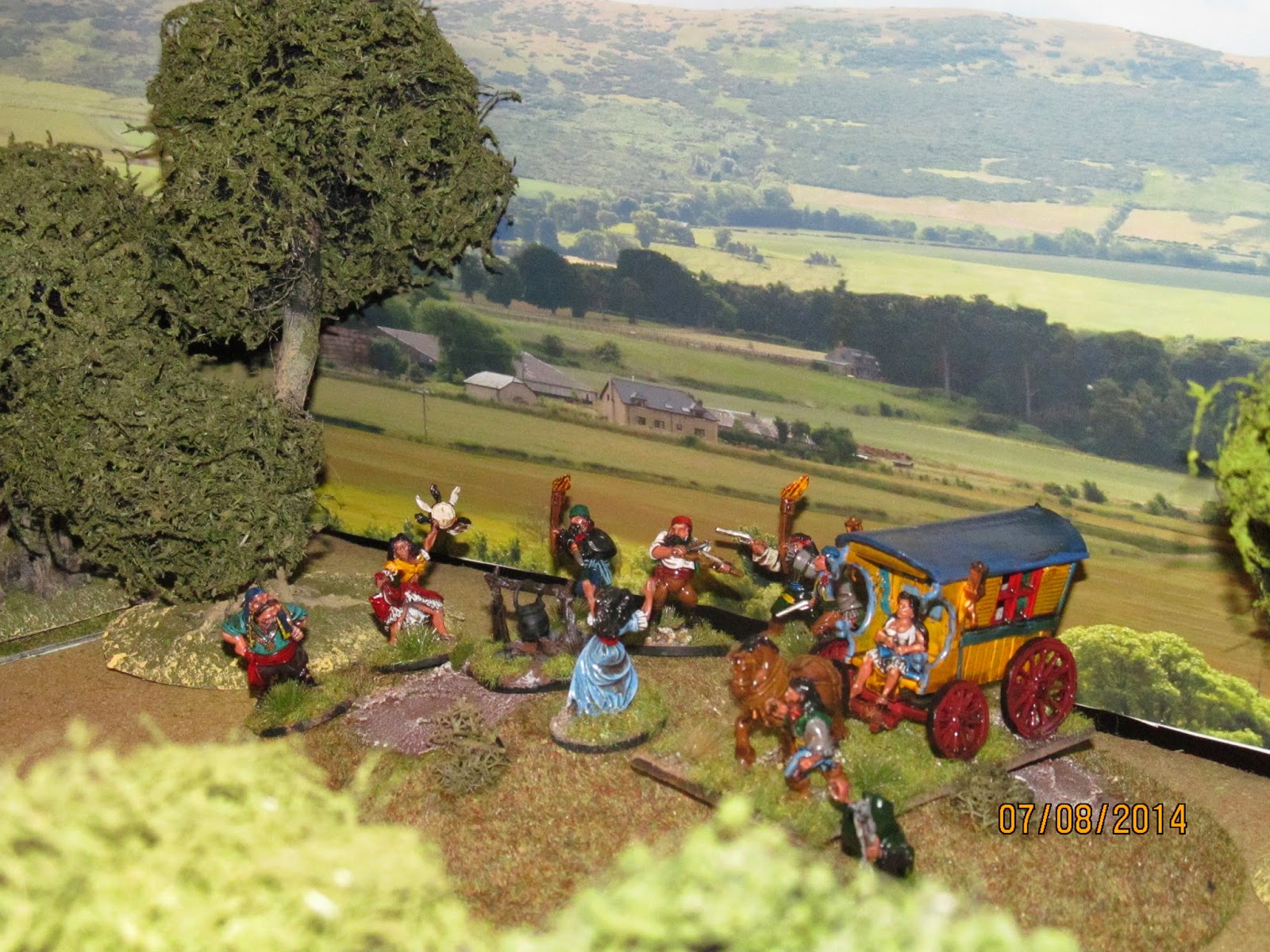 (Above, its those Gypseys again! Below, the Turks redeploying from the Allied left to fill the large gap in the centre. Behind are the Chasseurs d'Afrique masquerading as Turkish cavalry) 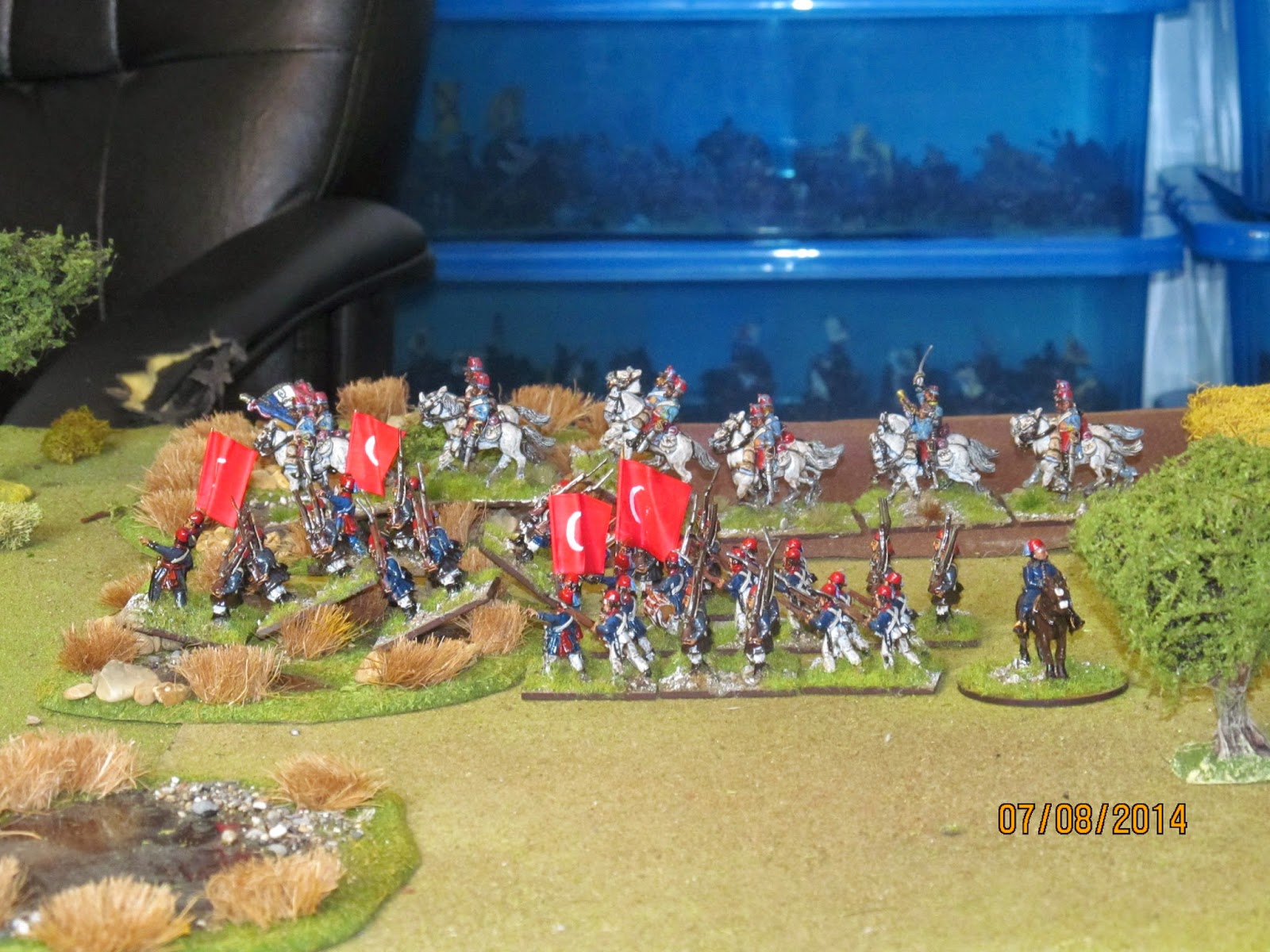 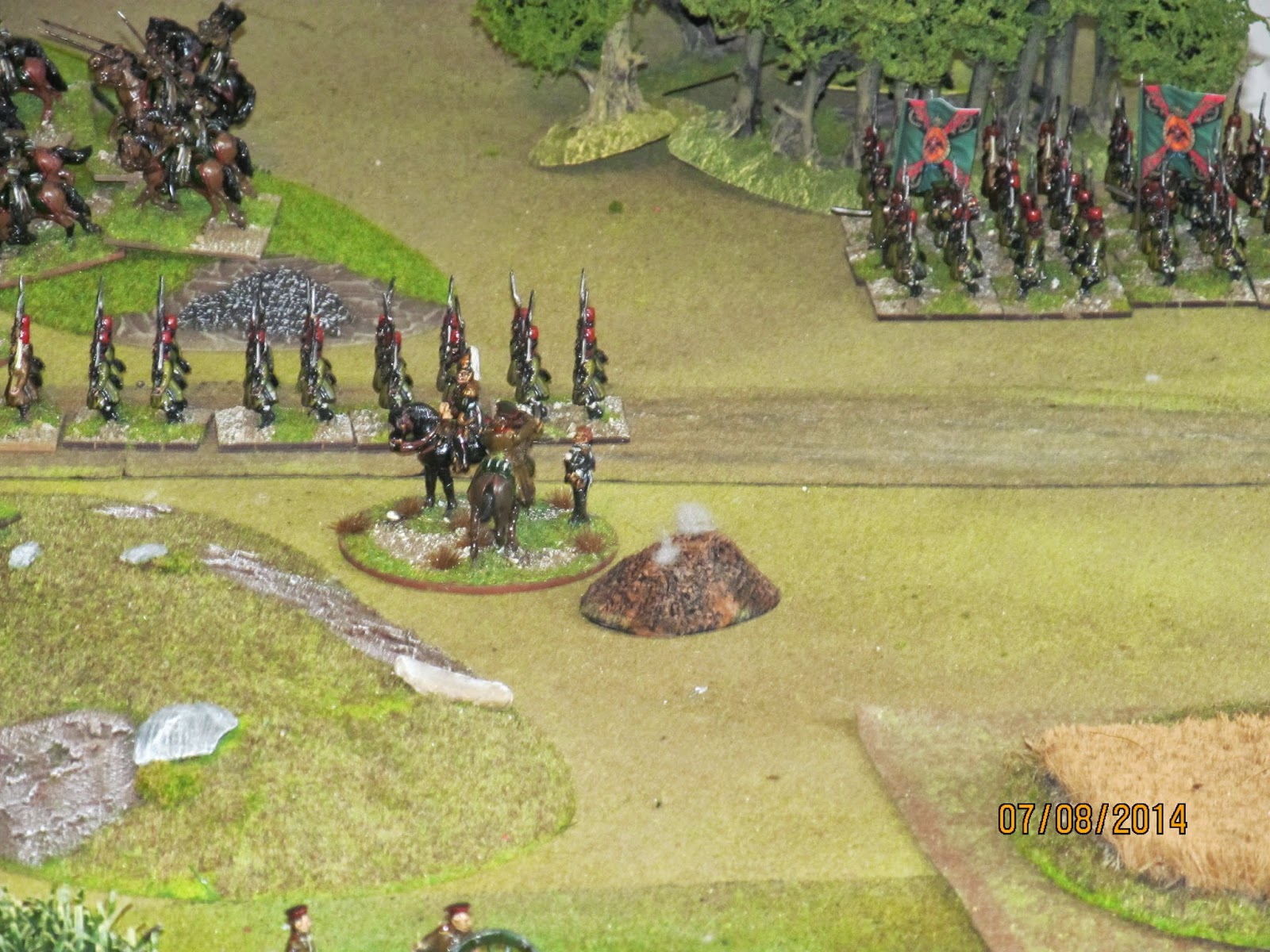 (Above, the dung heap of despair is passed to the Russian right flank commander after he threw a double six. Below, the intrepid Russians launch their first assault across the river). 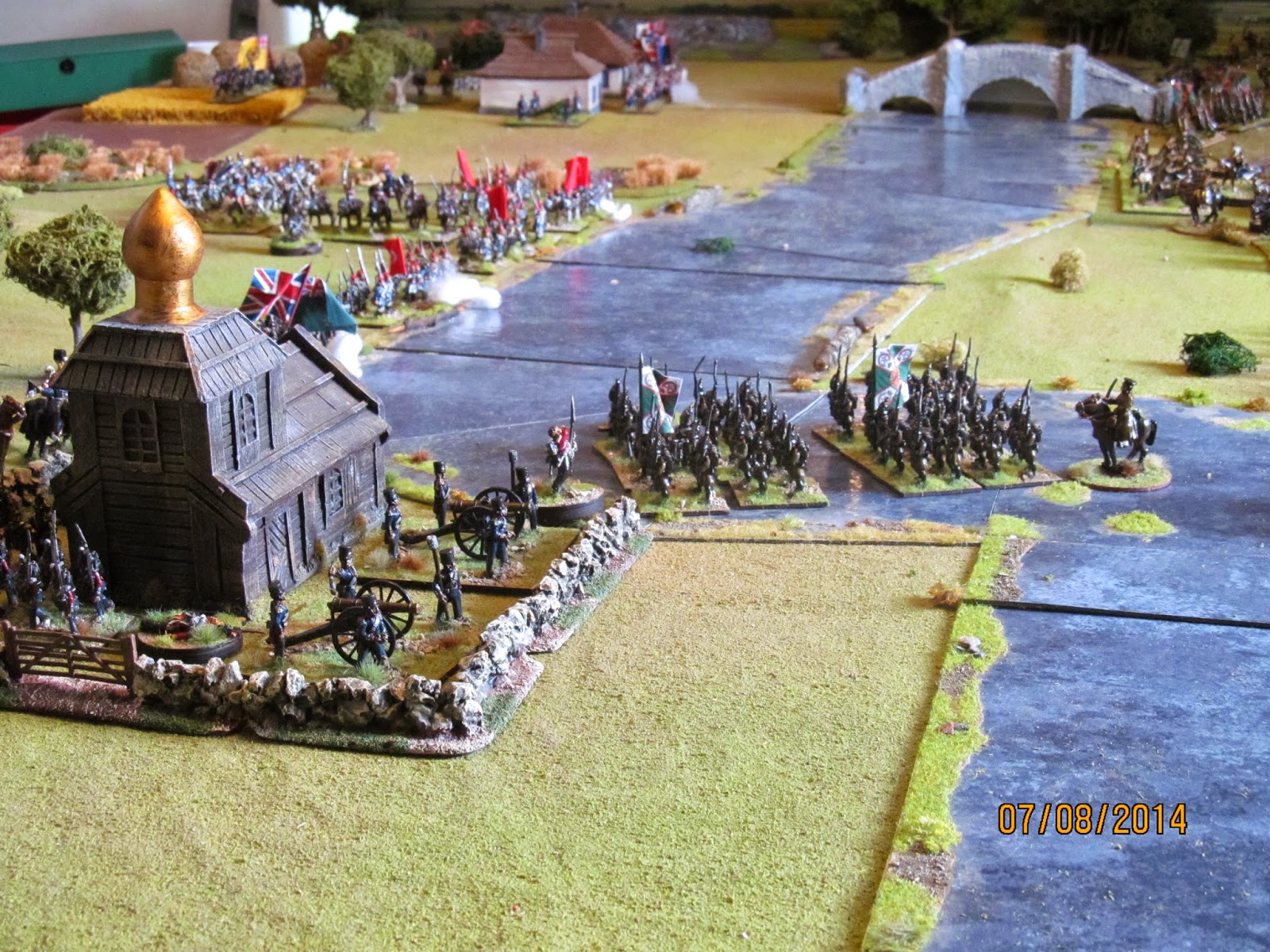 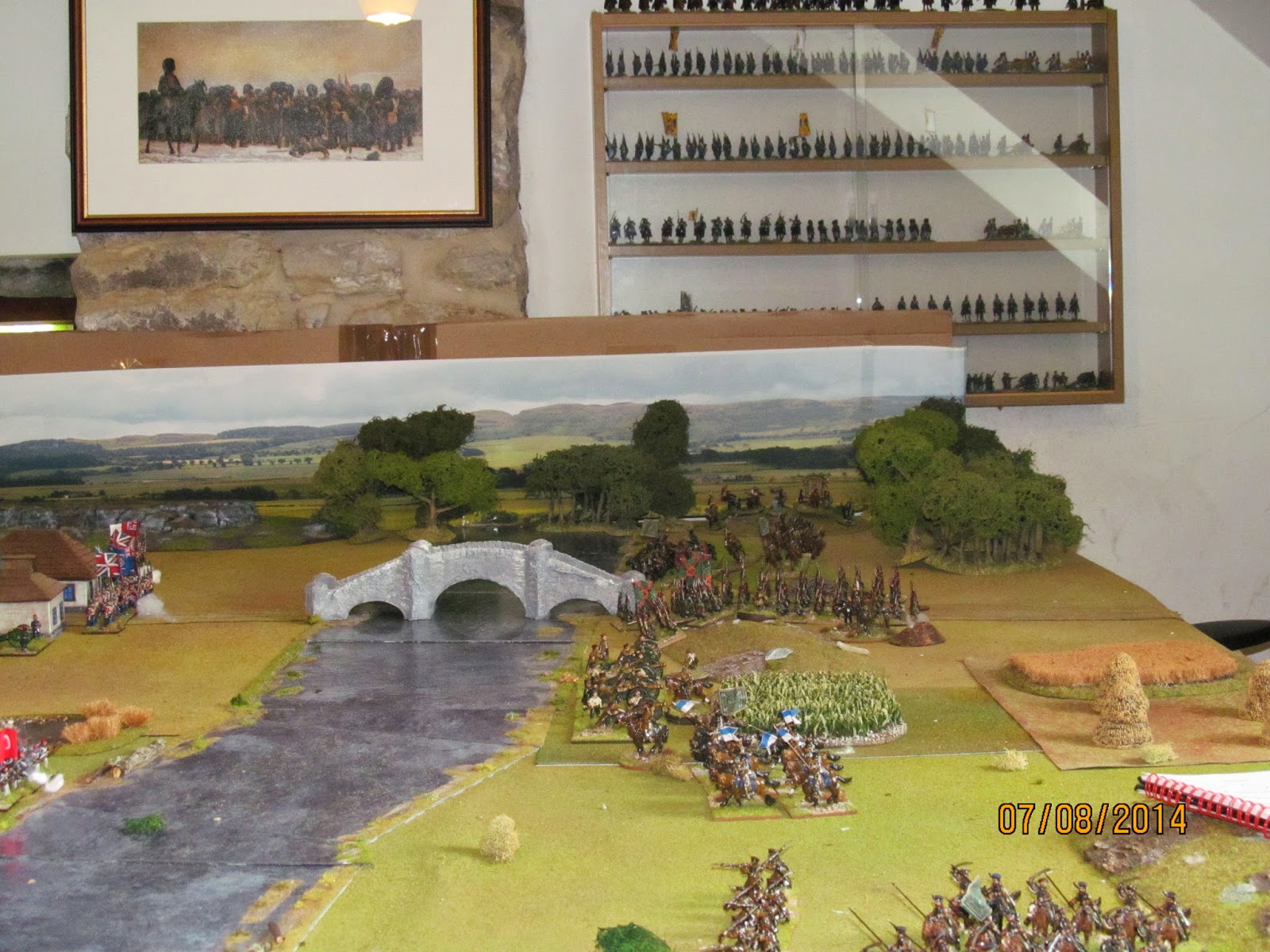 (Above, the far right flank. Russian guns finally in position to give the Turks a good battering, and the remains of the 6th Uhlan Brigade after its ill-fated attack across the river. In the far distance the Moscow Regiment lining up to cross the bridge). 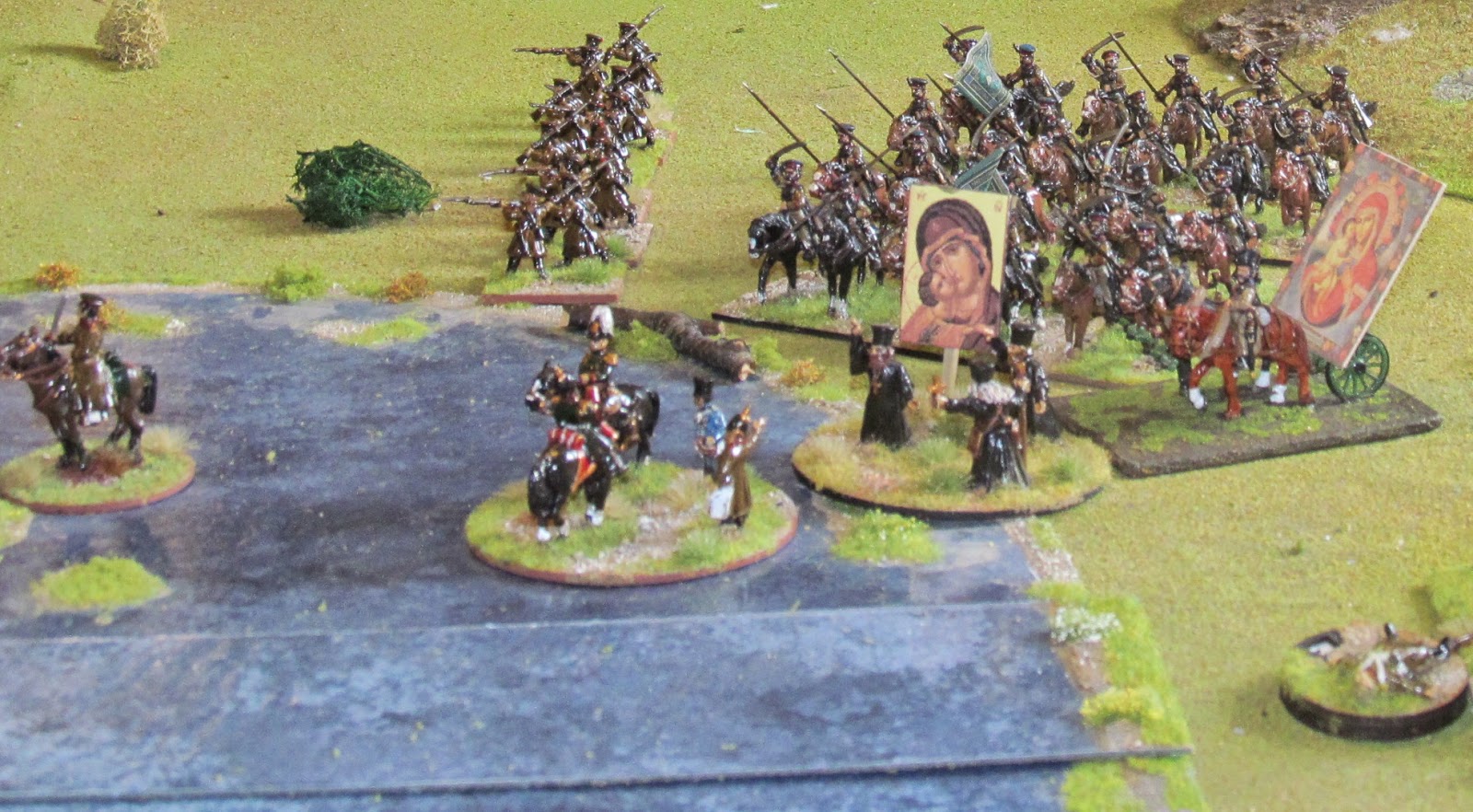 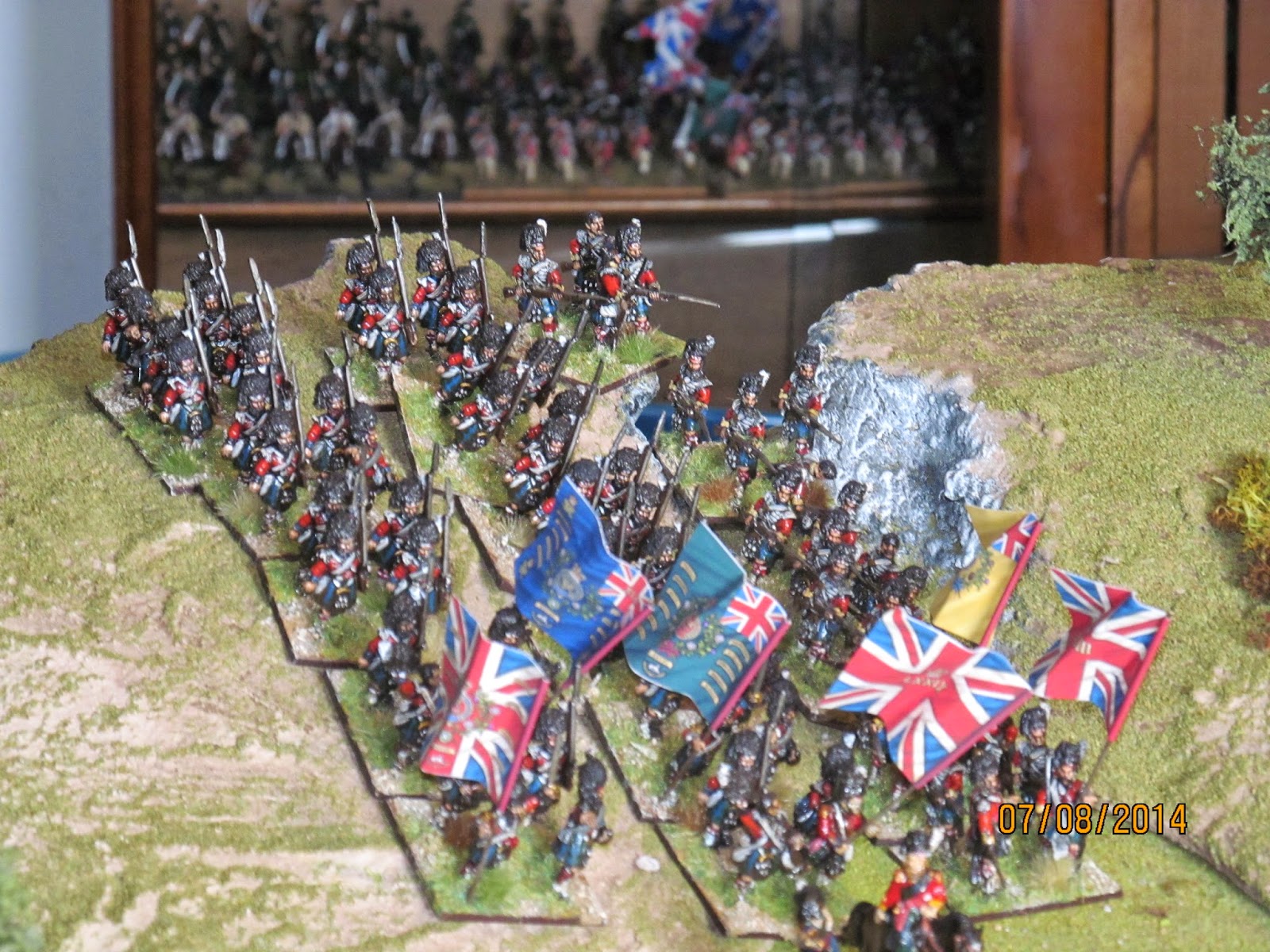 (Above, better later than never the Highland Brigade advance onto the table as below, the Russian assault is above to overcome the gallant defenders of the village). 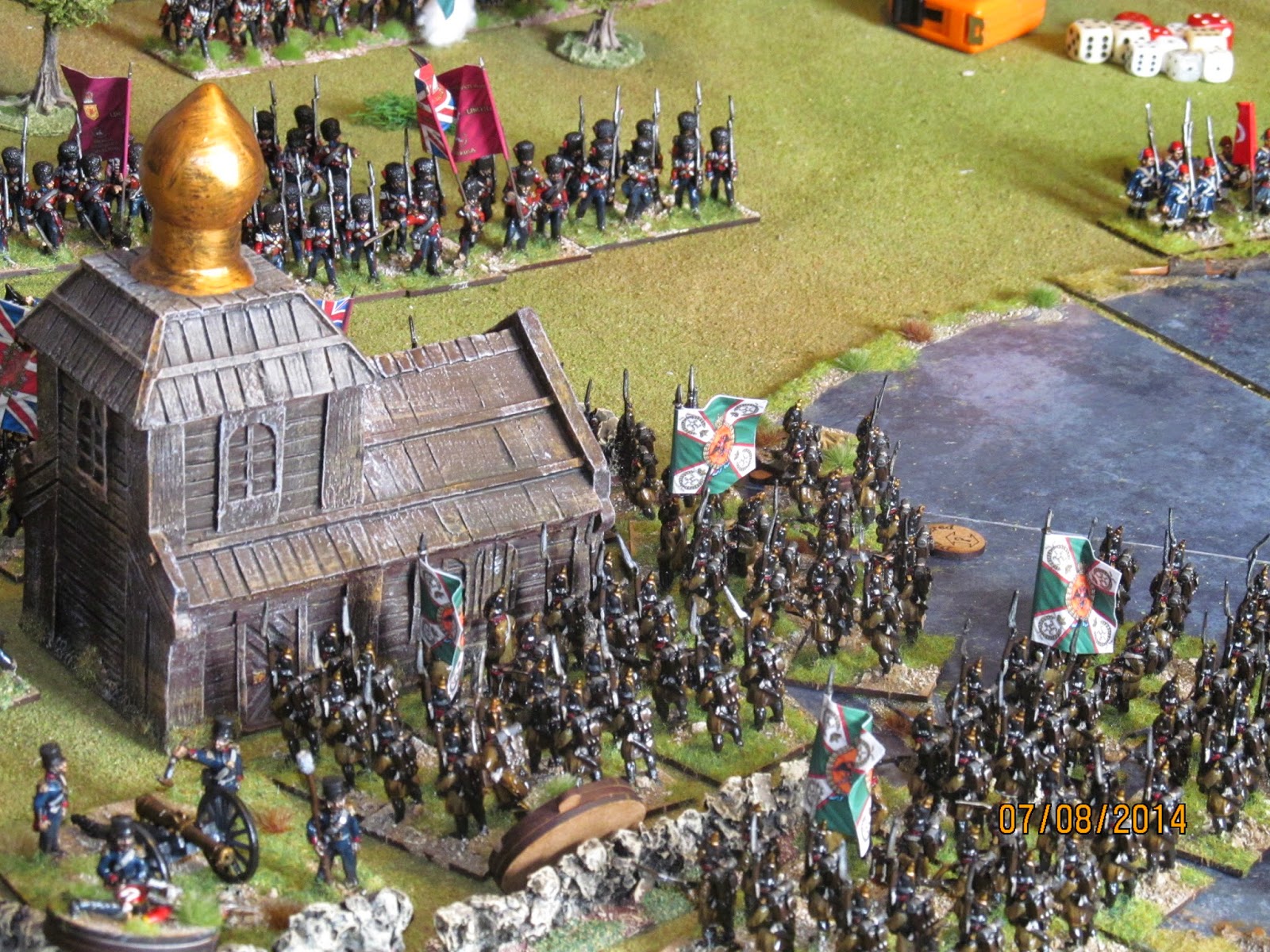 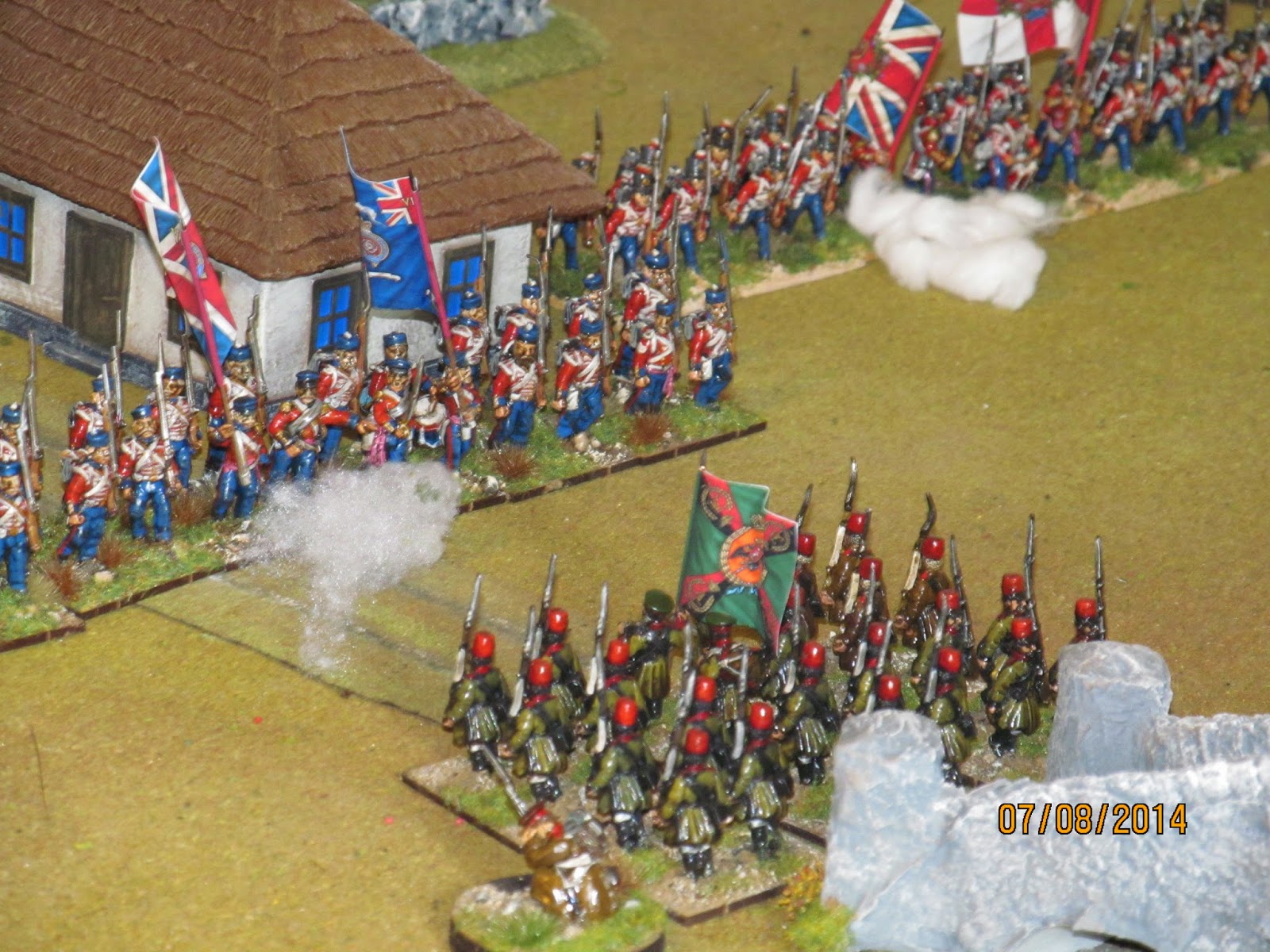 (Above, the lead battalion of the Moscow Regiment takes a volley from HM 7th Foot while below, the Guards move into action). 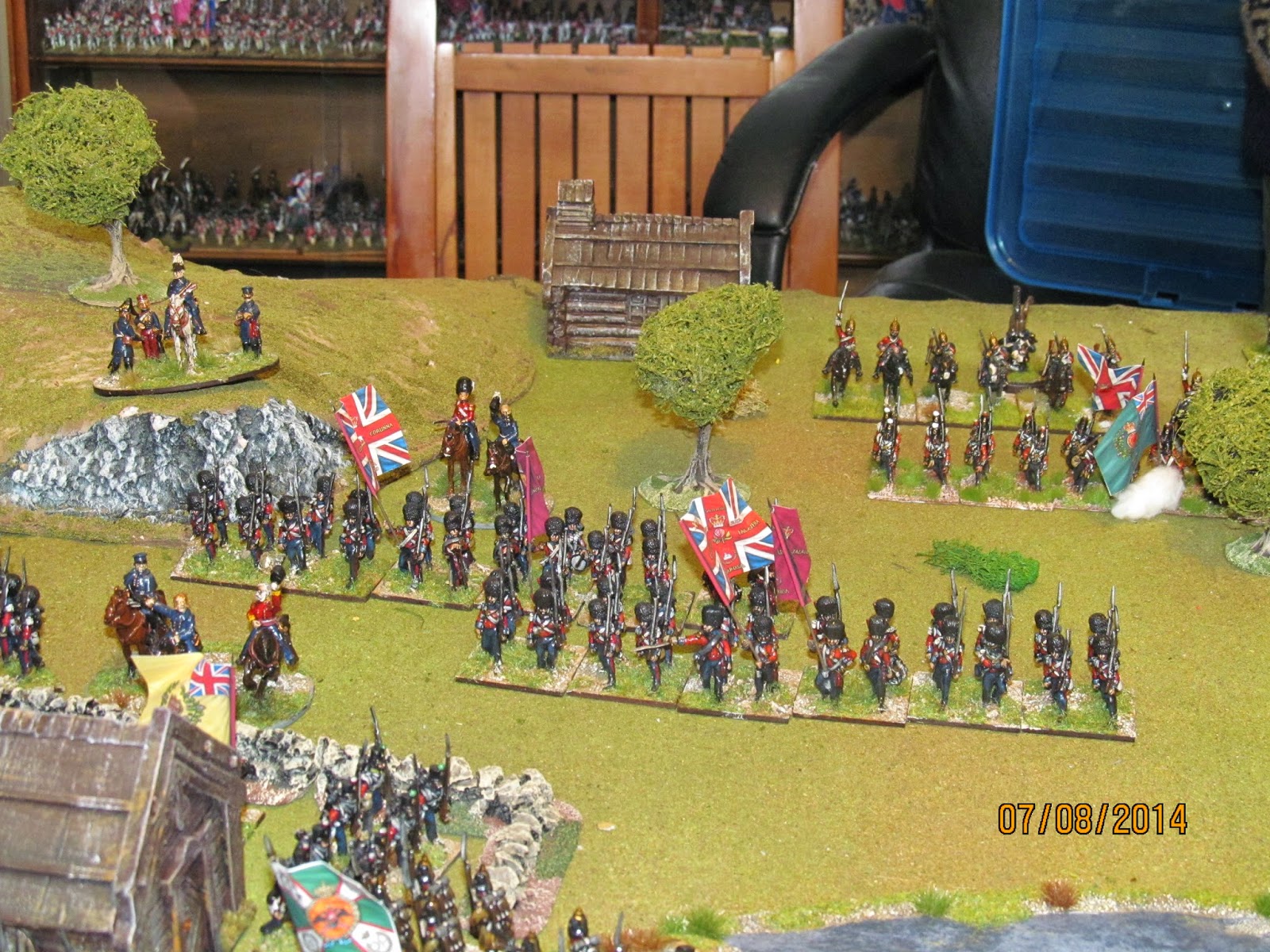 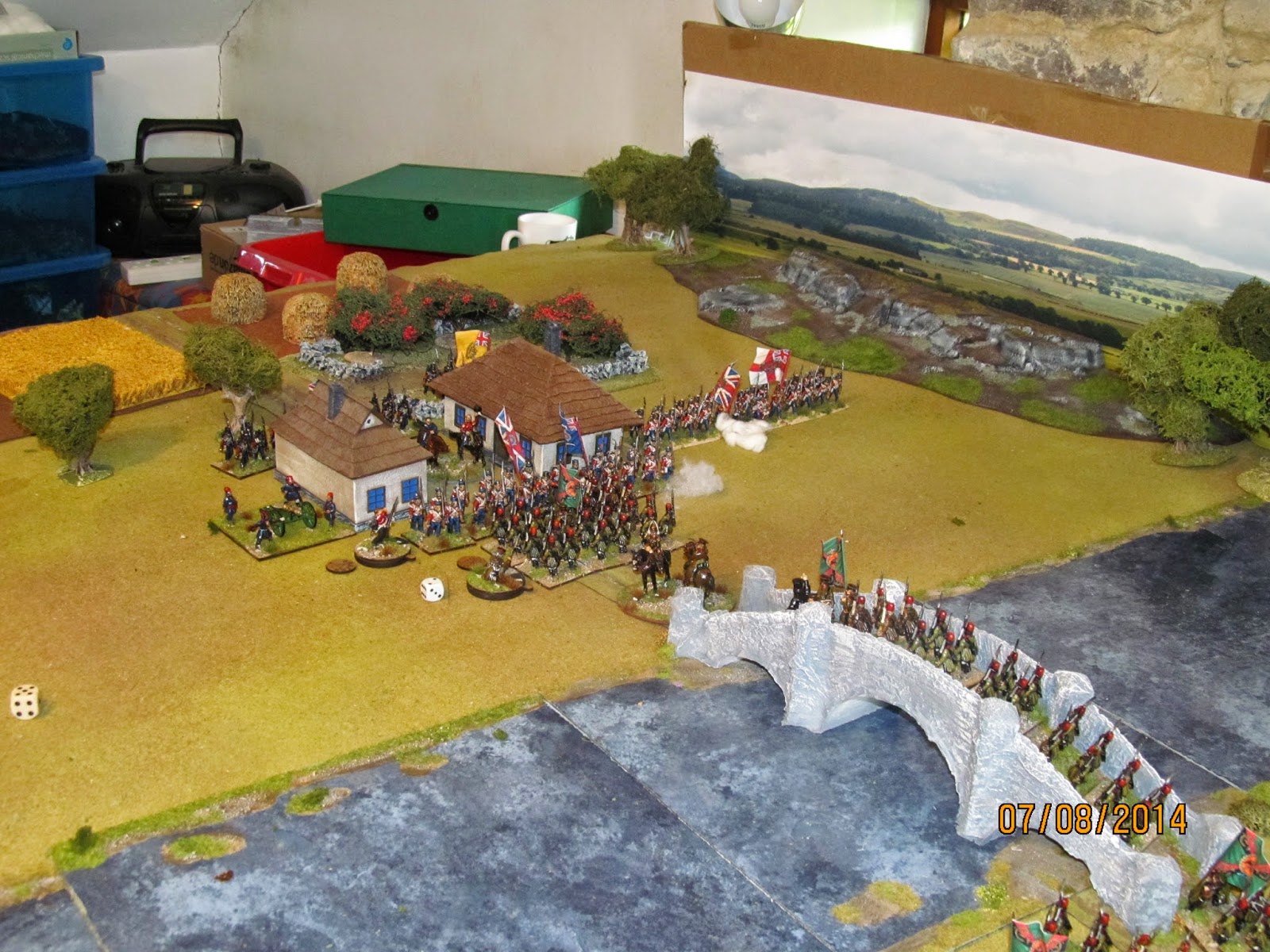 (Above, The Russians close with the British over the river while below the 6th Hussar Brigade fails to find any crossings further upriver). 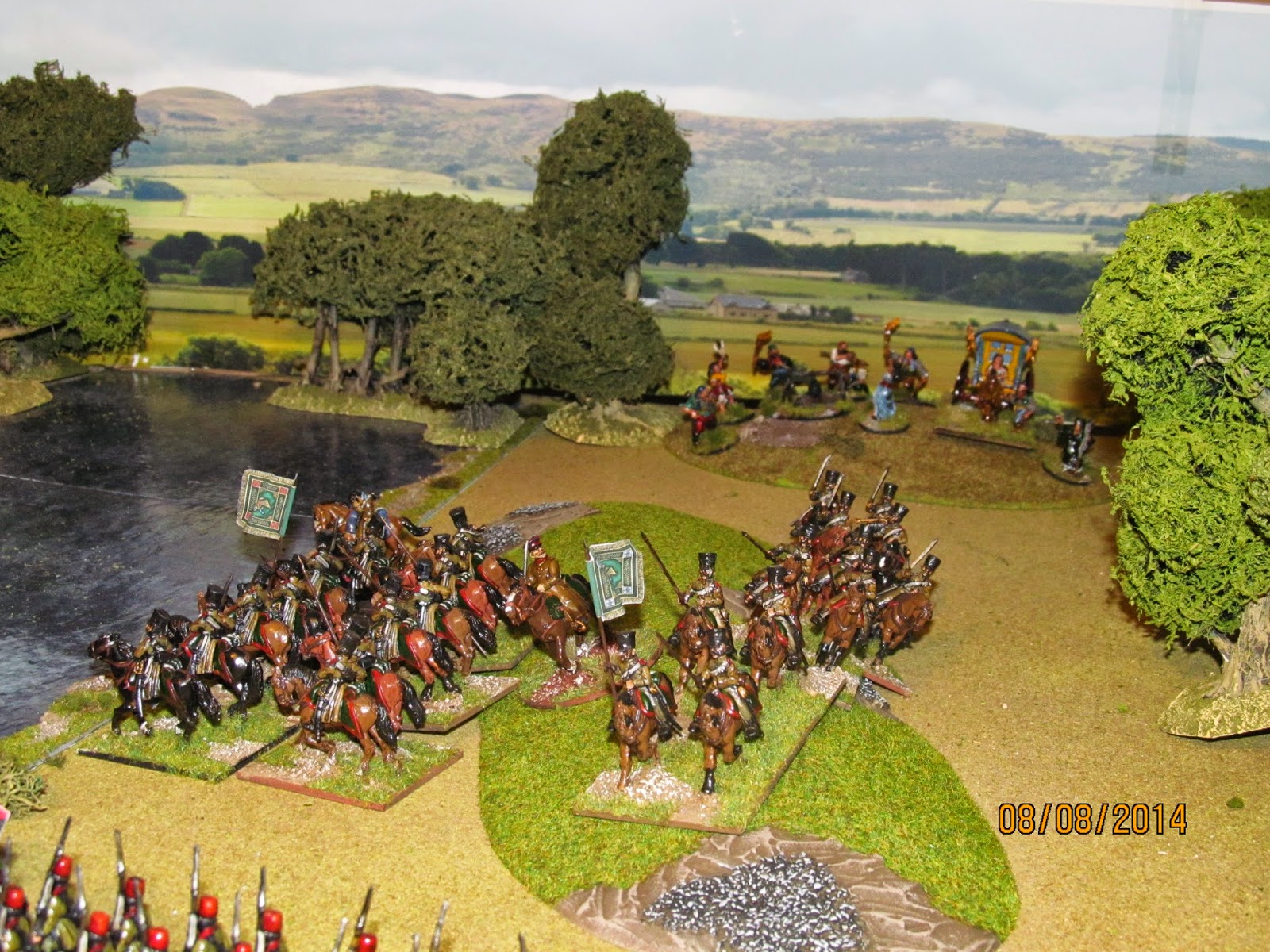 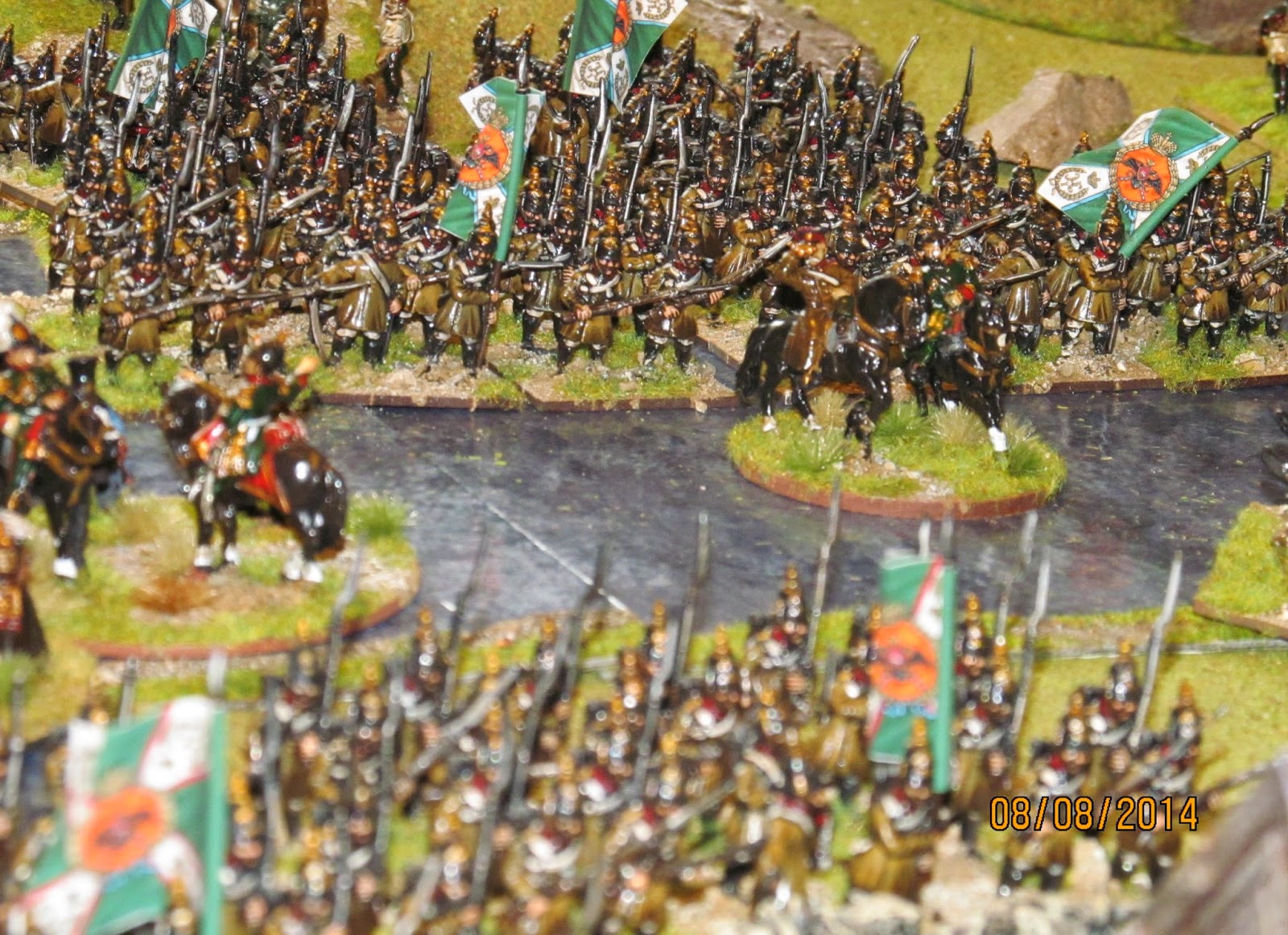 (Above, more Russians begin to cross the river while below, the yawning gap in the centre of the Allied line is evident). 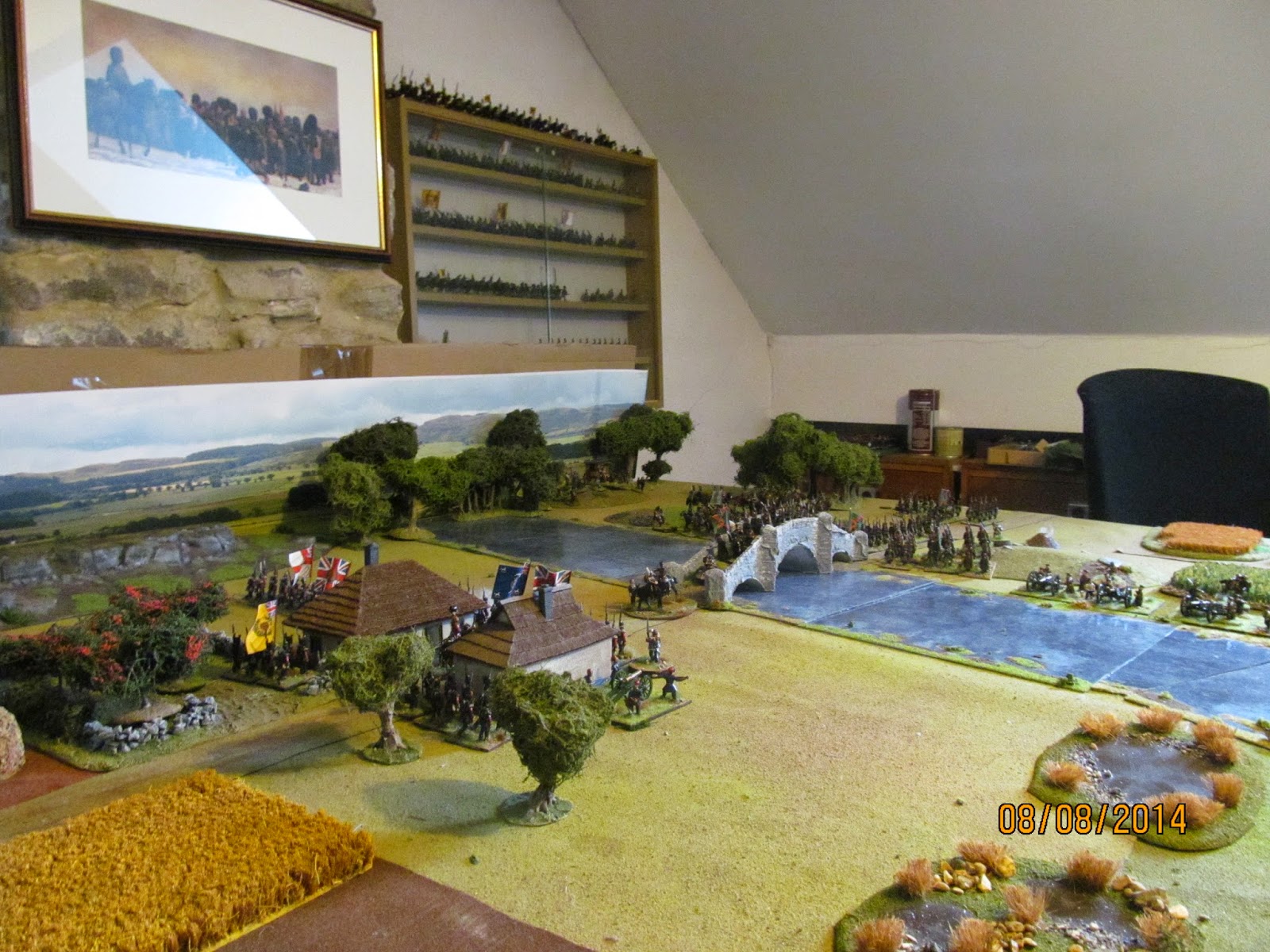 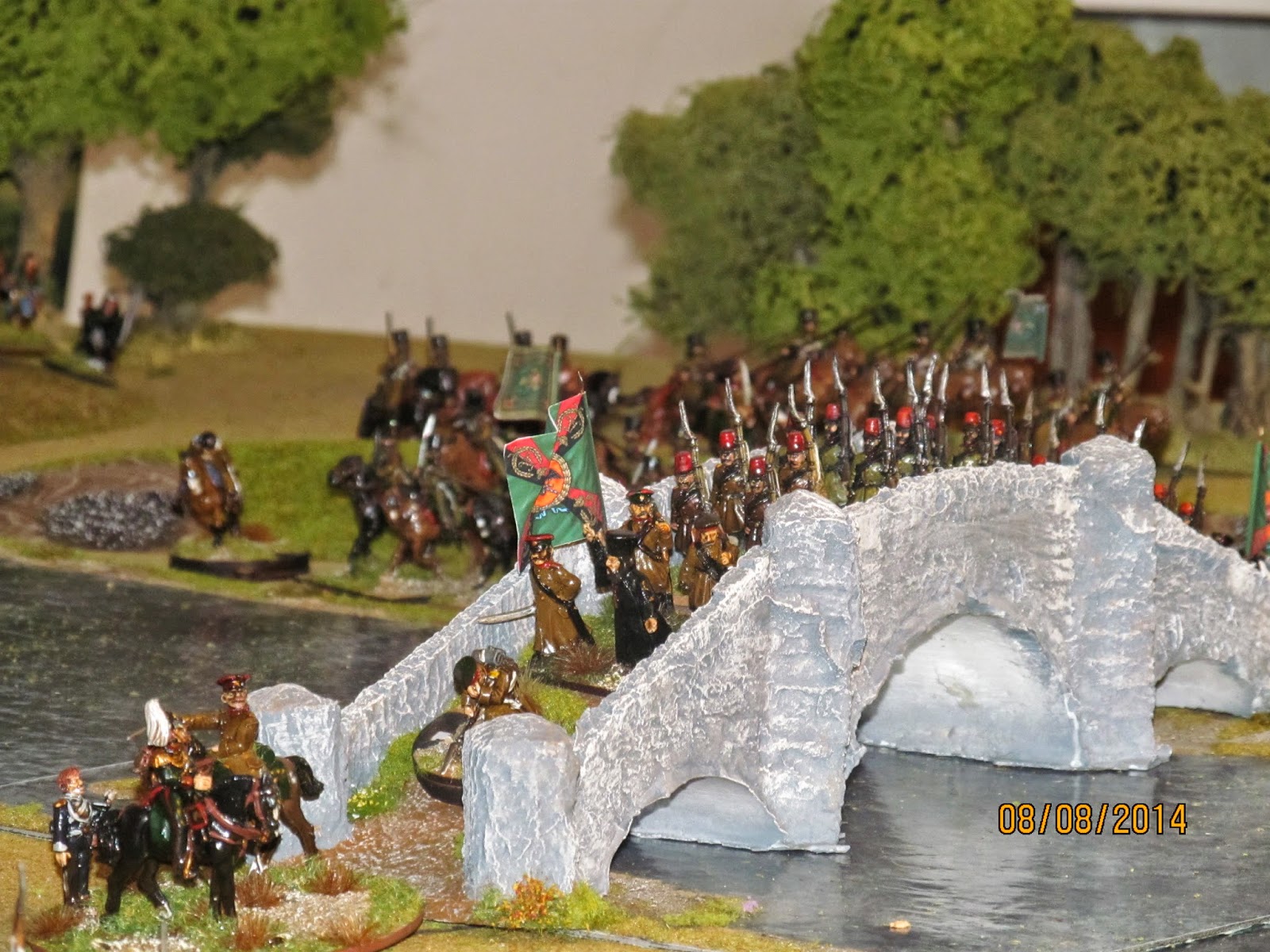 (Above, Russians backed up nose to tail on a very narrow and long bridge while below the Lord Raglan looks on as the Guards prepare to counter attack and assault the village). 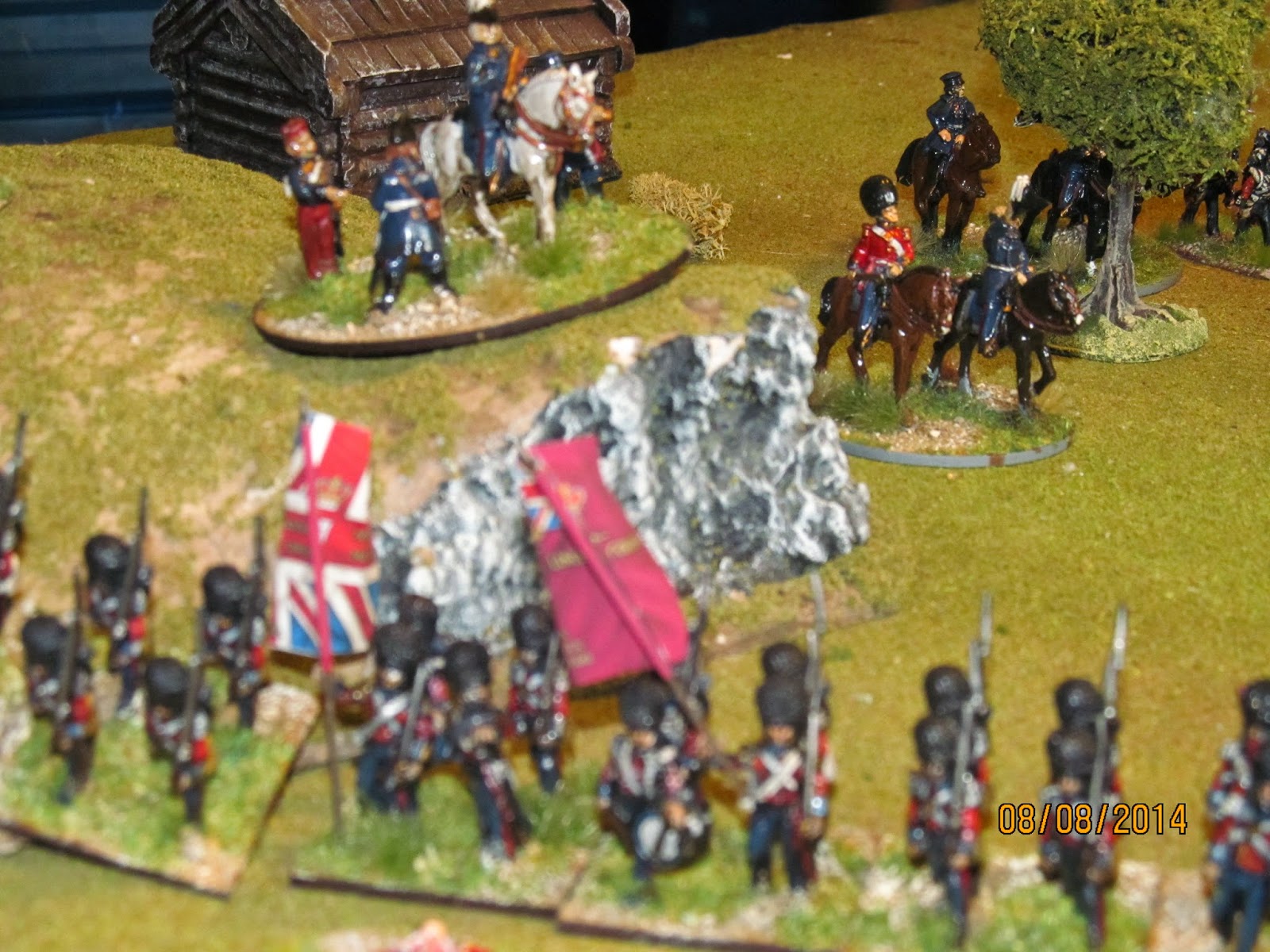 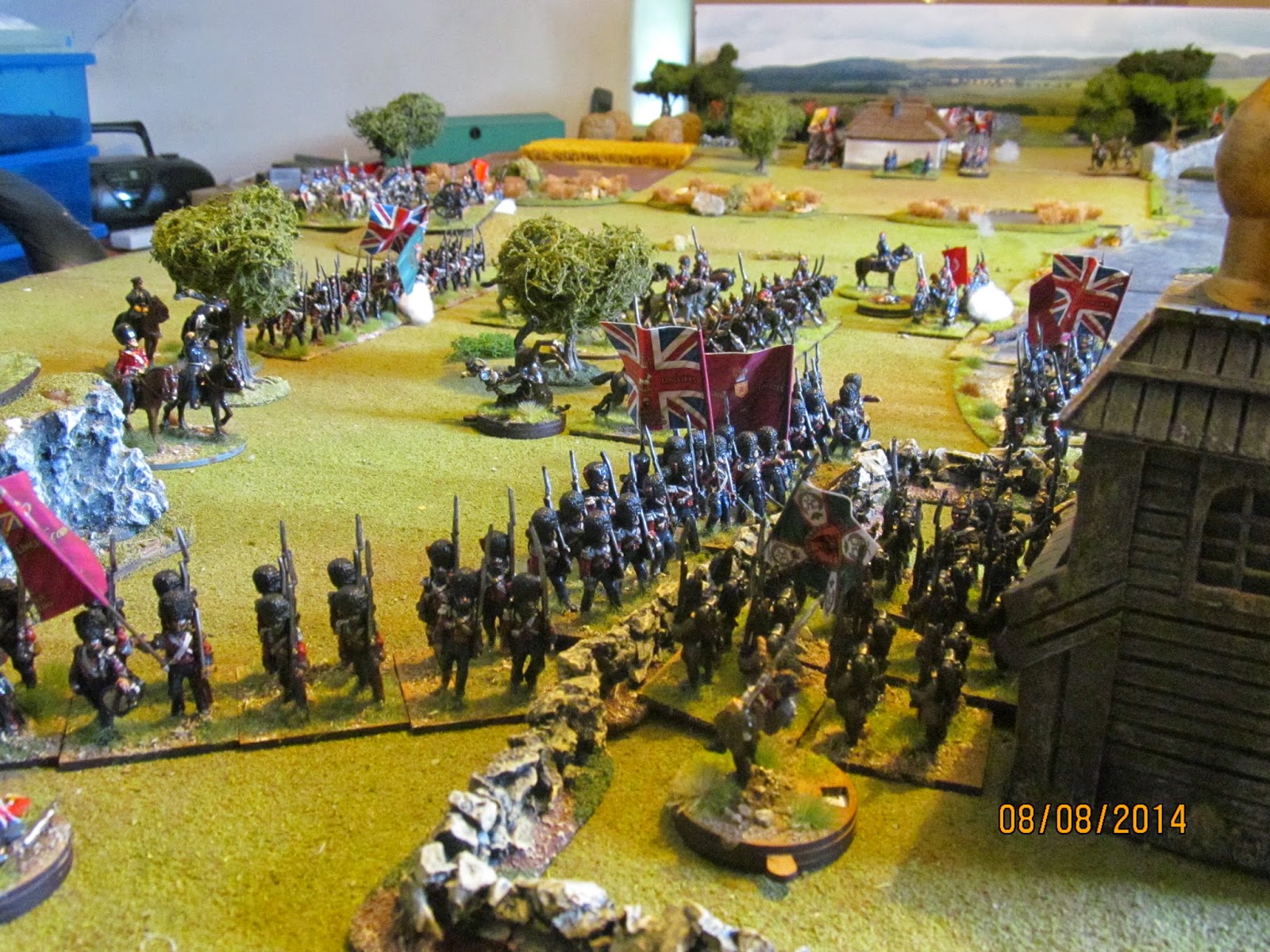 As can be seen from the photos, the Russians were successful in taking the village by the river crossing. What can't be seen is their failure in the centre when the Uhlans charged across the river but fell sort of their target before being hit in the flank by two squadrons from the Heavy brigade. One Uhlan regiment was destroyed and the other was forced to withdraw but only after breaking one of the British heavy cavalry squadrons. The Turks were eventually forced to retire rather than face a rather one-sided duel when the Russian artillery deployed to their front.

On the right flank the Russians were dogged by blunders and poor command, meaning that they never really got up enough steam (for their steamroller?) to mount a coordinated attack over the bridge. The Hussars were similarly unable to get into action or find a way to cross the river. The didn't stop them from being hit quite hard by long-range Minee fire.

Around the village the Russians made hard work of throwing the British out but in the end the garrison were thrown out and broken. Immediately Conrad counter attacked with the Guards but they were unable to break in.

At the close of play neither side had achieved their objectives in full, nor had sufficient brigades been broken for one side to claim a victory. It was a tough battle as the Russians were rightly struggled to get anything resembling a coordinated attack together anywhere but the British and Turks had to be very wary of the Russian artillery. Overall I believe Black Powder worked well. The Russians were hard to hurt, but it was clearly quite possible to damage them from afar with long-range rifle fire. The Turks did quite well and as usual the cavalry looked very pretty but didn't do much after the first inconclusive scuffle. A great and very enjoyable game. Thanks to Conrad for coming.
By Colin Ashton - July 10, 2014