The Battle of Monmouth - Washington tries to save the day!

Paul was up this week for our monthly game. I was keen to have another AWI battle, mainly as the figures were not all put away from the last game! (Also, I do like the period and I'm in the process of tidying up both armies as they are a little worn and battered). To be a little different we adopted some changes made as described in a recent MW article for a large SYW game in 10mm run the Grimsby lads (forgive me but I can't remember the battle). Basically, instead of being automatically disordered on a 6, when a 6 was thrown during firing the target unit had to throw on the Hail Caesar break test table. They might be ok, they might be disordered, or they could even  break.  I wasn't entirely convinced as I thought it might detract from the whole purpose and dynamics of the game where command and control are king, but I was very happy and willing to give it a go.

This scenario is right out of one of the British Grenadier scenario booklets, with the troop types/characteristics and orders of battle converted to fit Black Powder. The battle starts with the British entering the table having beaten off Major General Charles Lee's precipitous morning attack on the British army which was in the process of retiring from Philadelphia.  The American attack had been halted decisively and the troops routed. Clinton, the British CinC ordered a pursuit and the British encountered the Americans who, rallied by Washington were to be steadily reinforced during the course of the battle.

The forces involved in the game were as follows:

plus one line infantry battalion joined each of Erskine and Cornwallis' brigades at the same time as the Guards entered the game.

The Hessians were included as an optional extra and to get two new units on the table!

I classed all the Americans as Continentals (mainly to give them a fighting chance) of varying degrees of effectiveness and for once their commanders were superior to those of the British. The British were all 'Crack' and benefited from the 'Ferocious Charge' rule to give them a (supposed) advantage in a bayonet charge, which seemed about right. Everyone had the first fire rule. 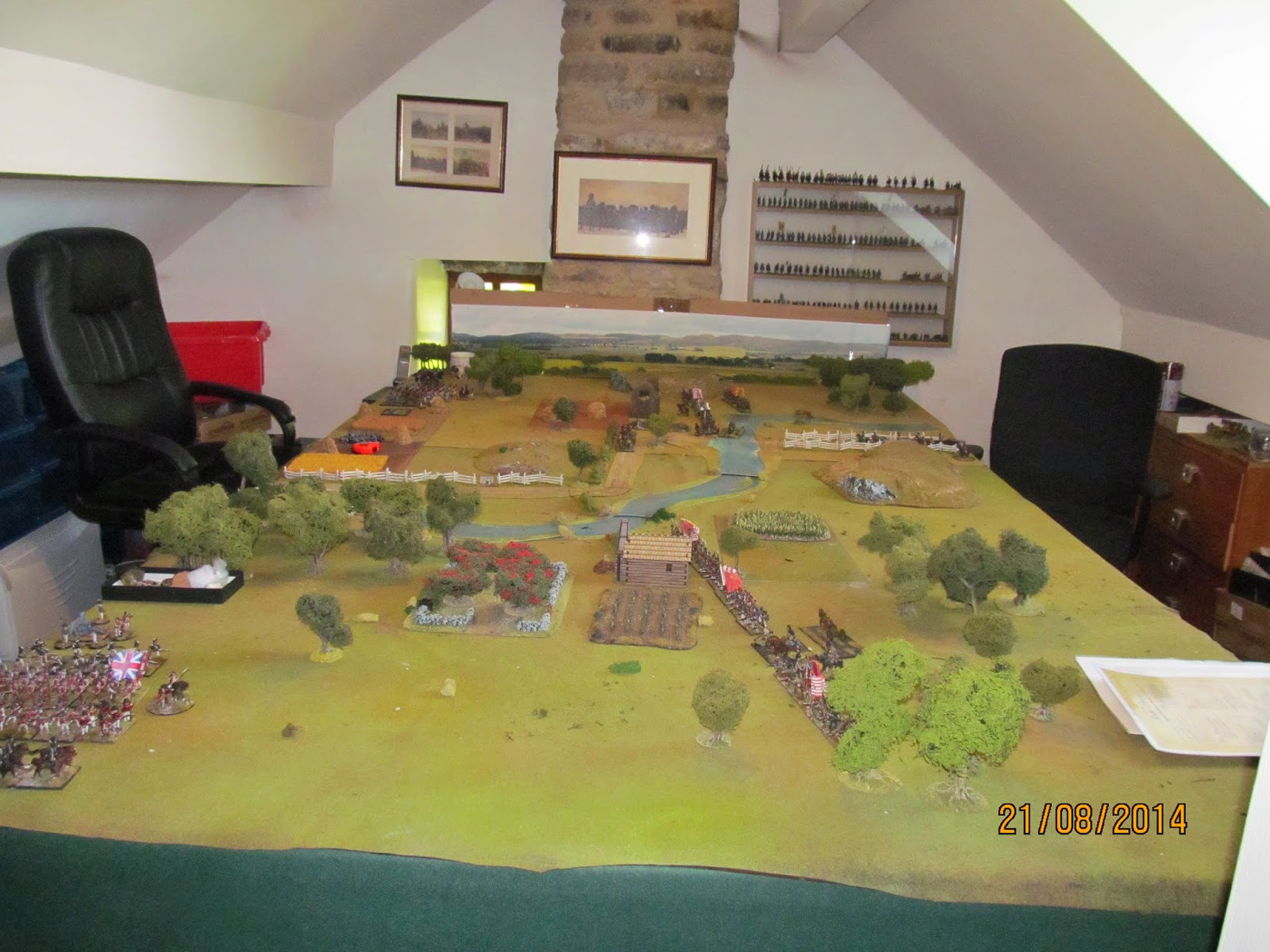 Objectives were simple. The British had to force the Americans off the table in order that they could safely continue their retirement from Philadelphia. The Americans had to prevent the British from doing so by blunting their attacks sufficiently to cause more casualties than they received.

I let Paul take the British. They made a slow entry onto the table, leaving several battalions in march column and vulnerable to artillery fire. Sadly, my artillery fire was pretty ineffective although the Highlanders on the British right did take some damage. The early moves of the game saw the Americans make some adjustments to their line and their artillery take up a position on the hill in their centre that dominated the battlefield. I forgot to bring on my reinforcements when they were due but when they did arrive they were able to plug a very wide gap in my line in the centre, opposite the British Guards brigade. 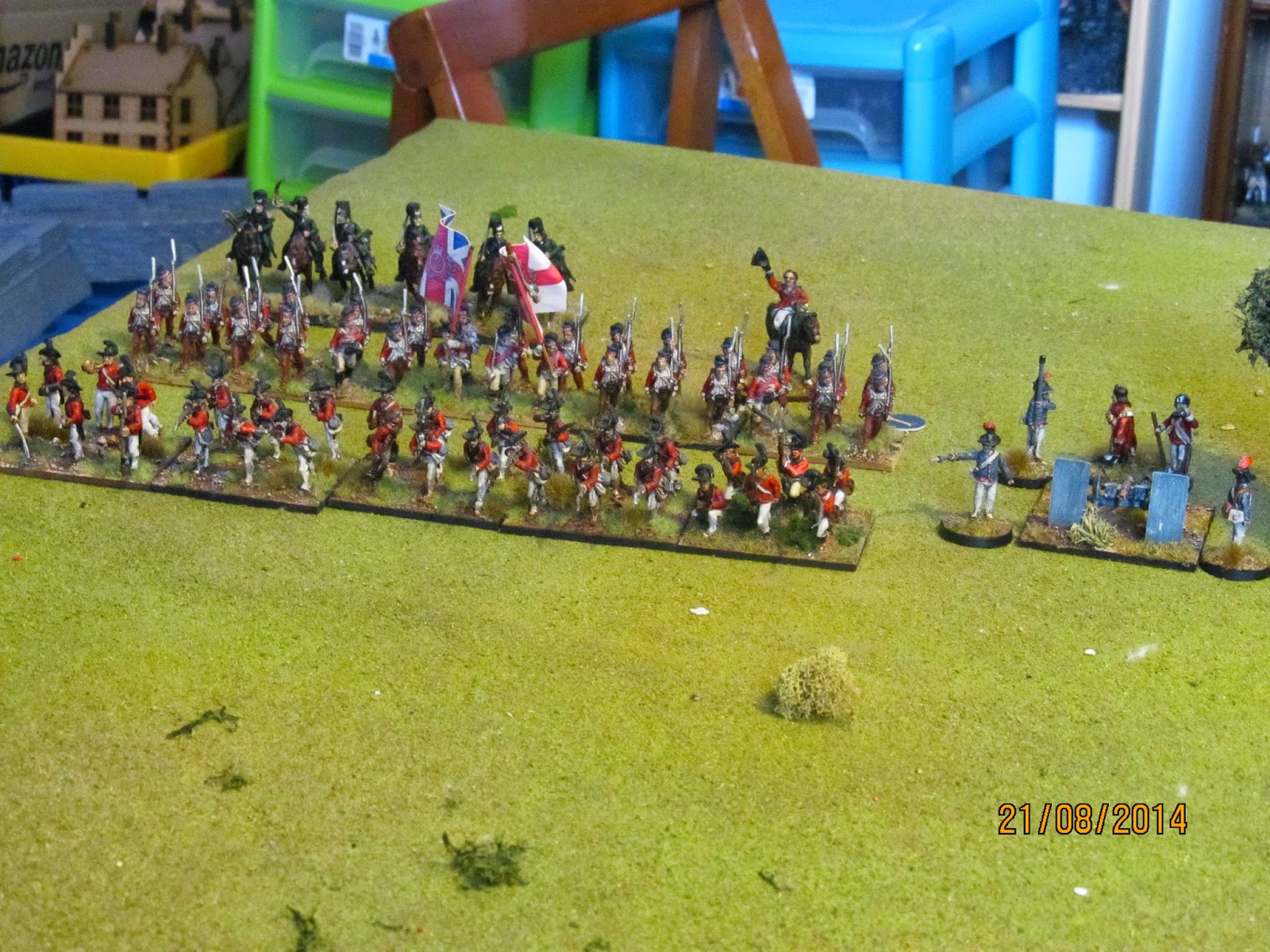 On the British right the Highlanders and Light btn advanced towards the waiting Americans. The British artillery was ineffective but the American battery damaged both British battalions. In the firefight that followed one American battalion was forced to retire disordered but the Highlanders were broken. The Queens Rangers skirmishers occupying the orchard were also forced to retreat and never got back into the battle.  Meanwhile the Light battalion was now under fire from two battalions of Continentals and a battery and, shaken by the weight of fire was broken. The British on this flank wore now in no position to continue their attack.

On the extreme British left HM 33rd launched a bayonet charge uphill at a unit of Continentals but were held and eventually thrown back in disarray. Not quite the result either of us had been expecting but in the end it was all down to the dice scores. The battalion withdrew and took no further part in the action other than to be an occasional target for one of my artillery pieces and some under-employed Continentals.


Meanwhile in the centre the Guards had arrived. After a very slow start they managed to deploy along the line of the stream facing a newly-arrived brigade of Americans. The Grenadiers also closed with the Americans facing them and drove them off. However in the course of the fighting one battalion of grenadiers was broken. The Guards charged across the stream and destroyed both Continental units they were facing. They were then countercharged by a further American battalion which threw them back across the stream. It in turn was then shaken and broken by close-range musket fire.

The remaining Grenadier battalion advanced directly up the hill directly towards the American artillery battery. Remarkably they weathered the storm of grapeshot during the artillery's closing fire (for this read I threw some diabolical dice and Paul saved most of them!) but in the hand to hand combat that followed the Americans hung on for two turns before being broken. 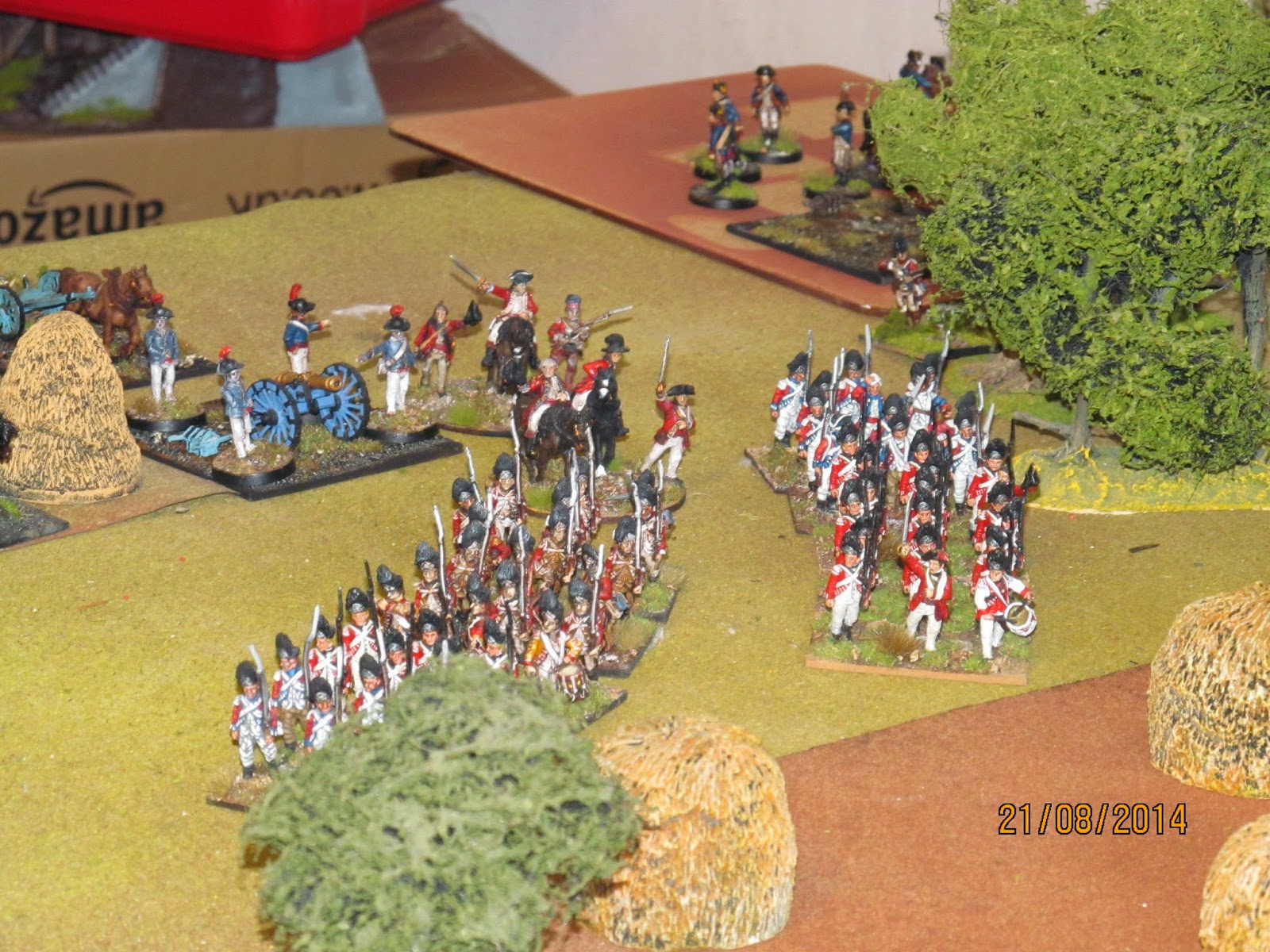 On the other flank the Grenadiers slowly advanced and deployed into line facing the American positions. The dismounted troop of the the 16th Light Dragoons moved into a wood while their mounted comrades advanced towards the American line. Paul wisely decided against a frontal charge but the dragoons were too close and were badly shot up and driven off broken. The British reserve artillery had deployed on the edge of field in the centre of the table and made its mark felt by destroying a unit of American skirmishers lurking behind the hedgerows in the centre. This allowed the Grenadiers to advance. The Hessians had made their appearance and were now in position to take over from the somewhat battered Guards brigade. The Grenadier battalion moved in support of the British left flank while the Fusiliers crossed the stream, driving off another American battalion in the process. 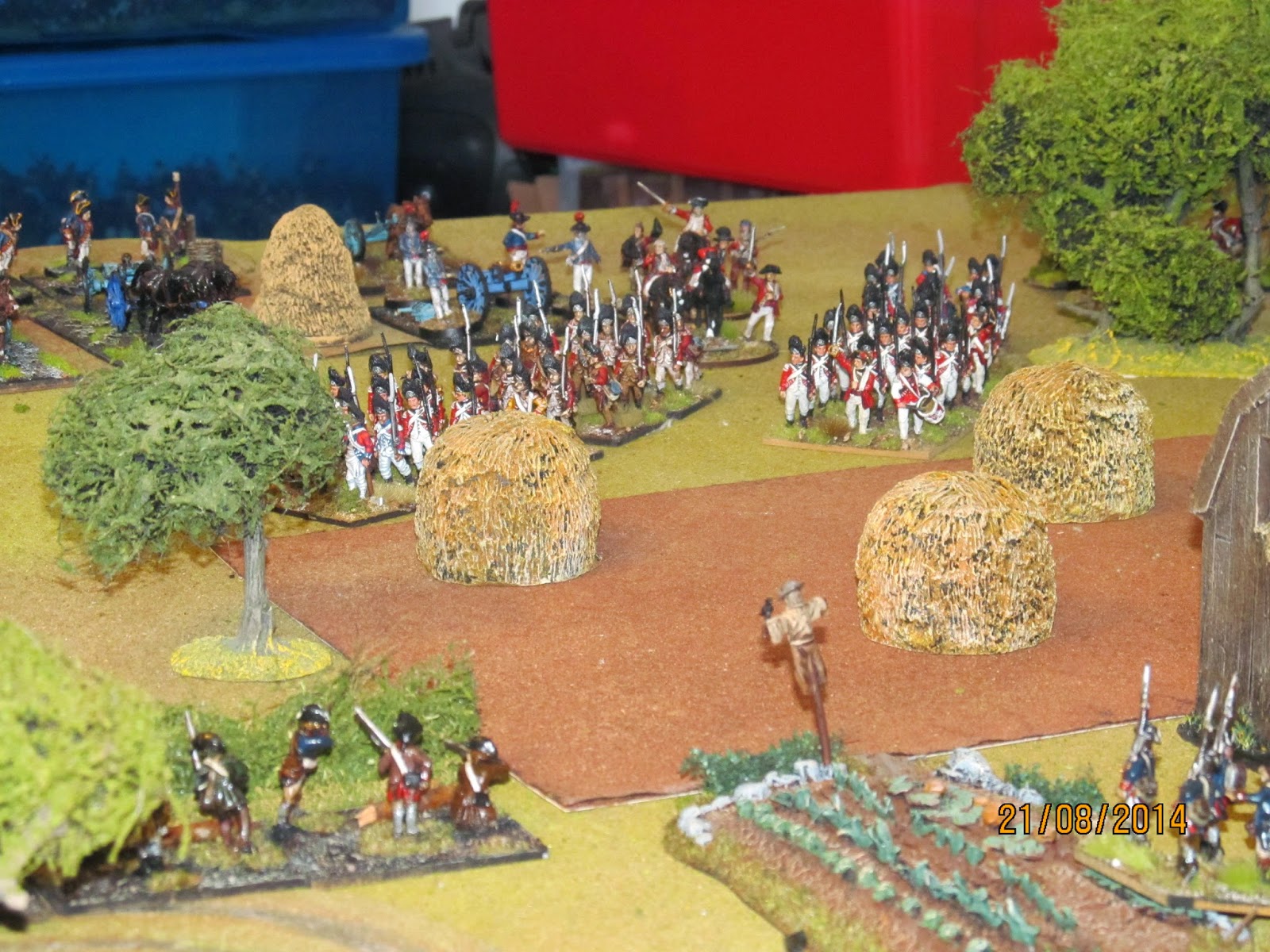 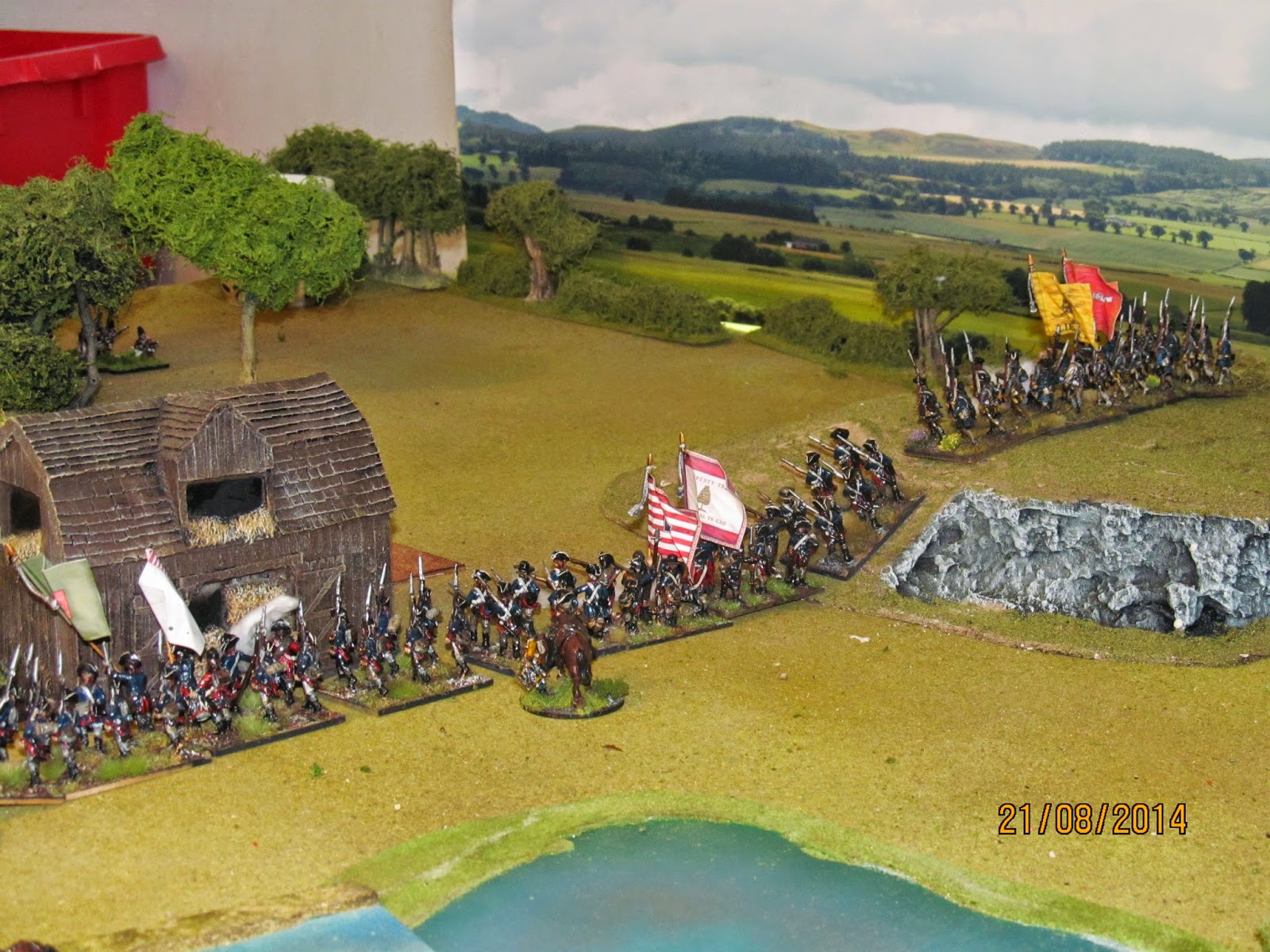 (The American right waits for the inevitable British onslaught!) 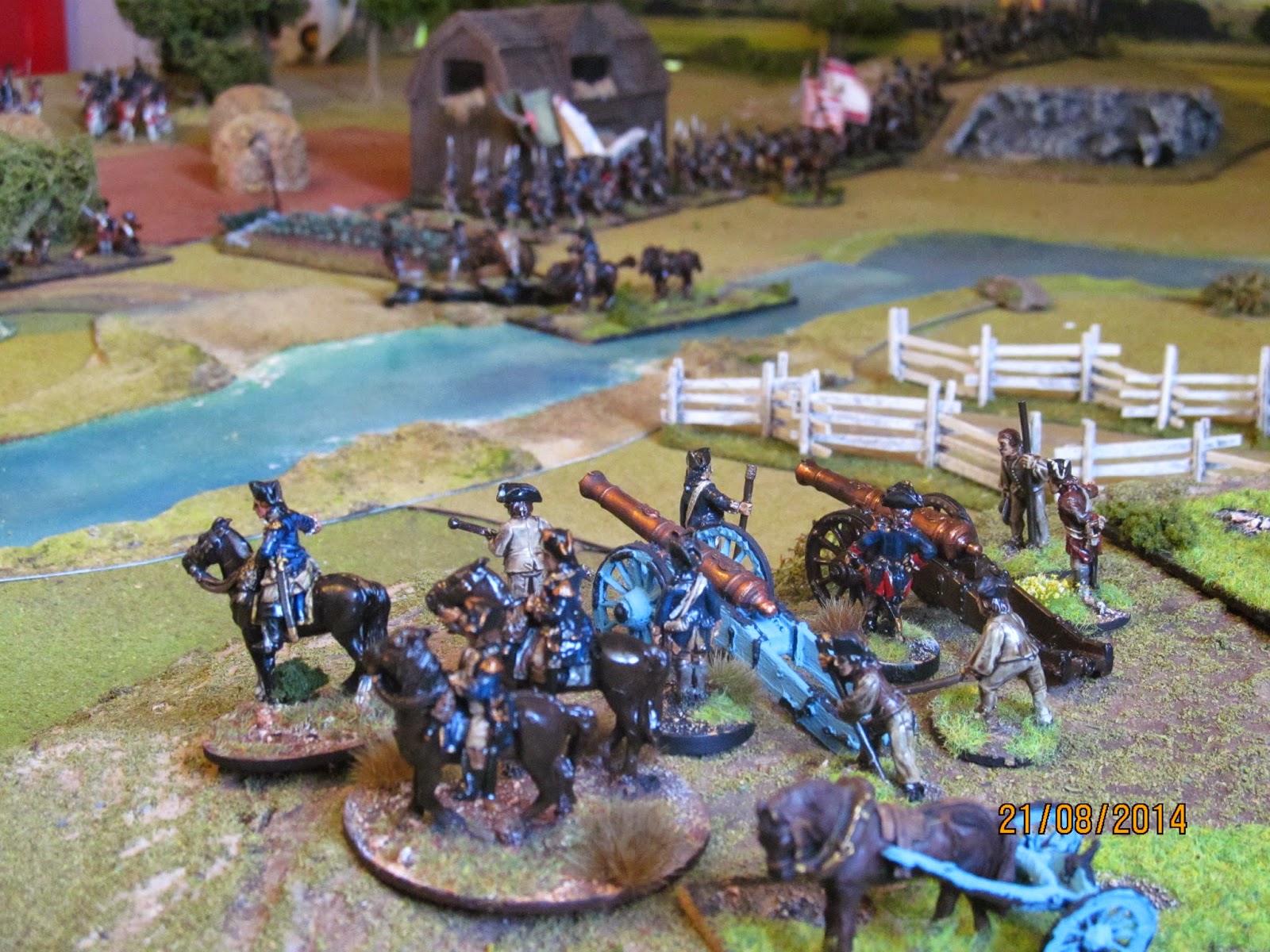 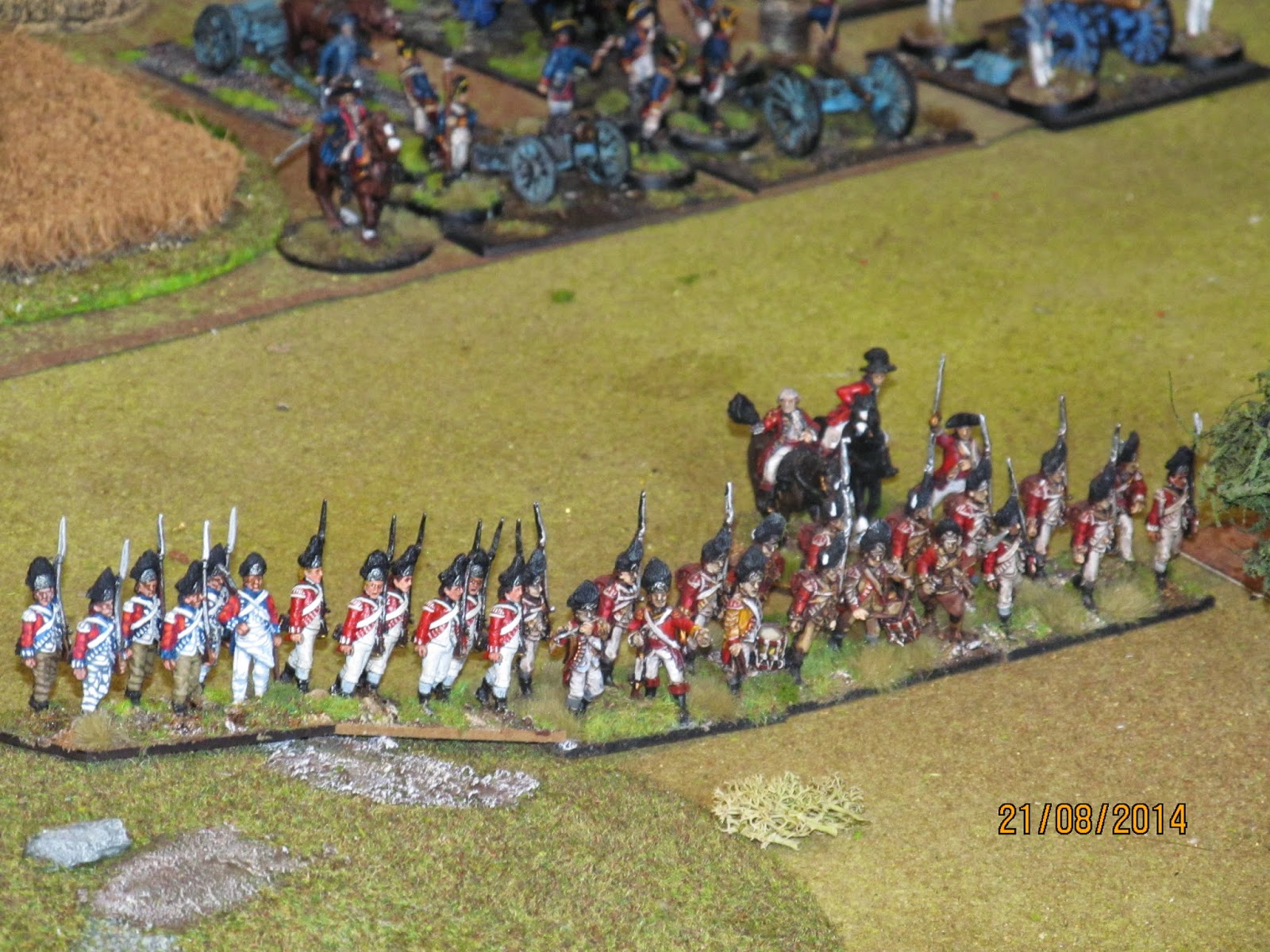 ("The Grenadiers will advance!") 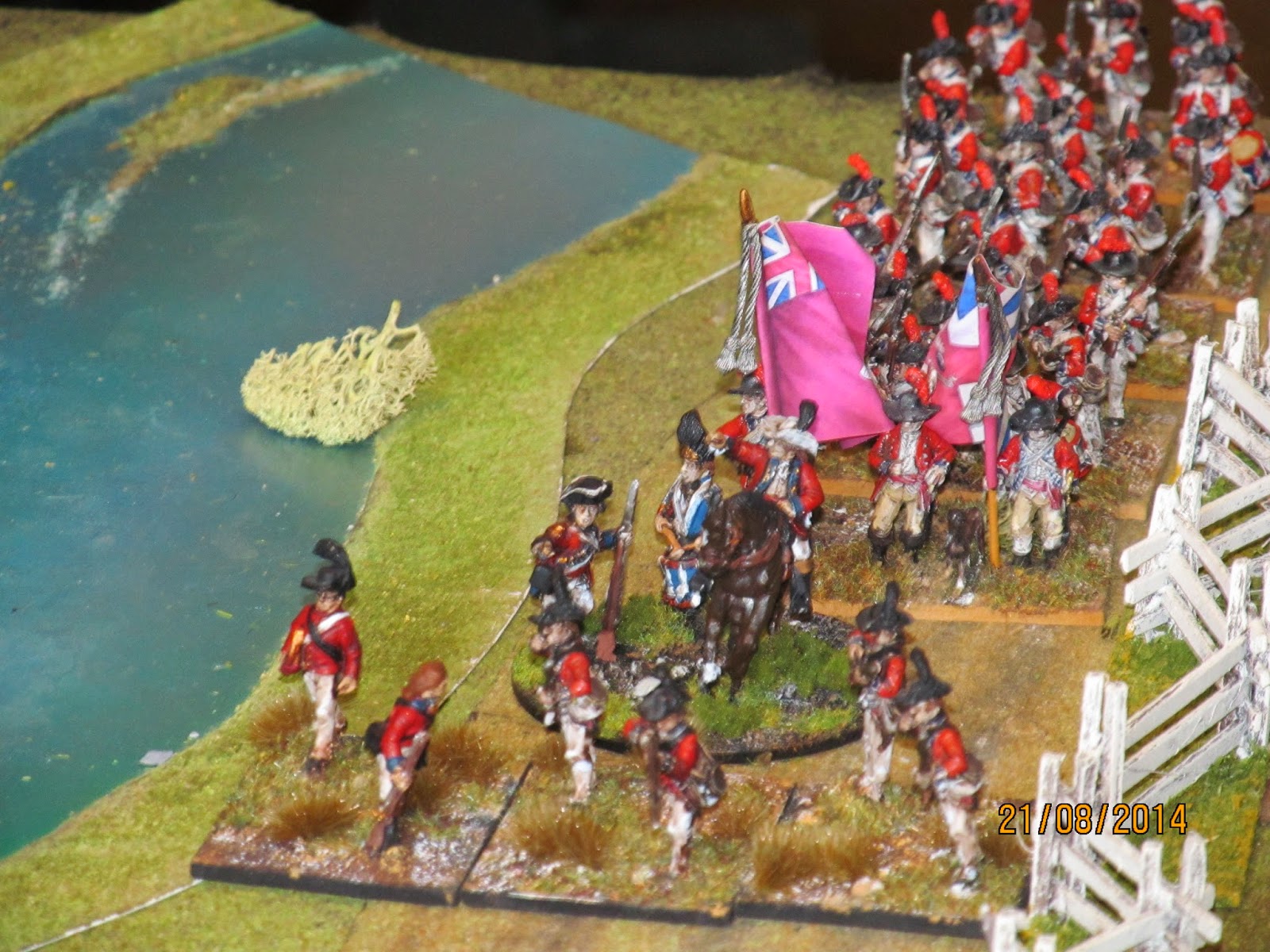 (Above, the Guards make an appearance while below the British artillery deploys ) 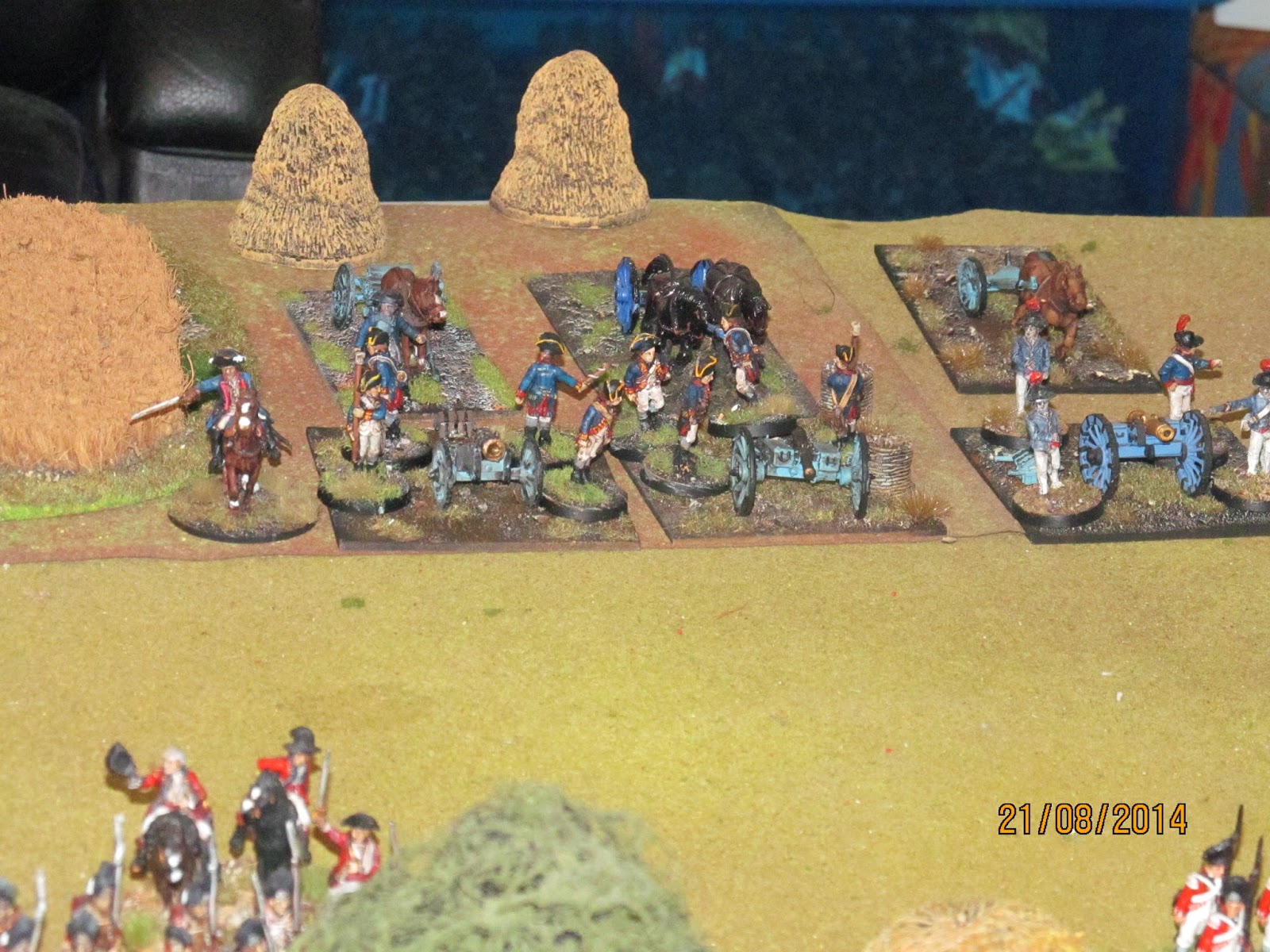 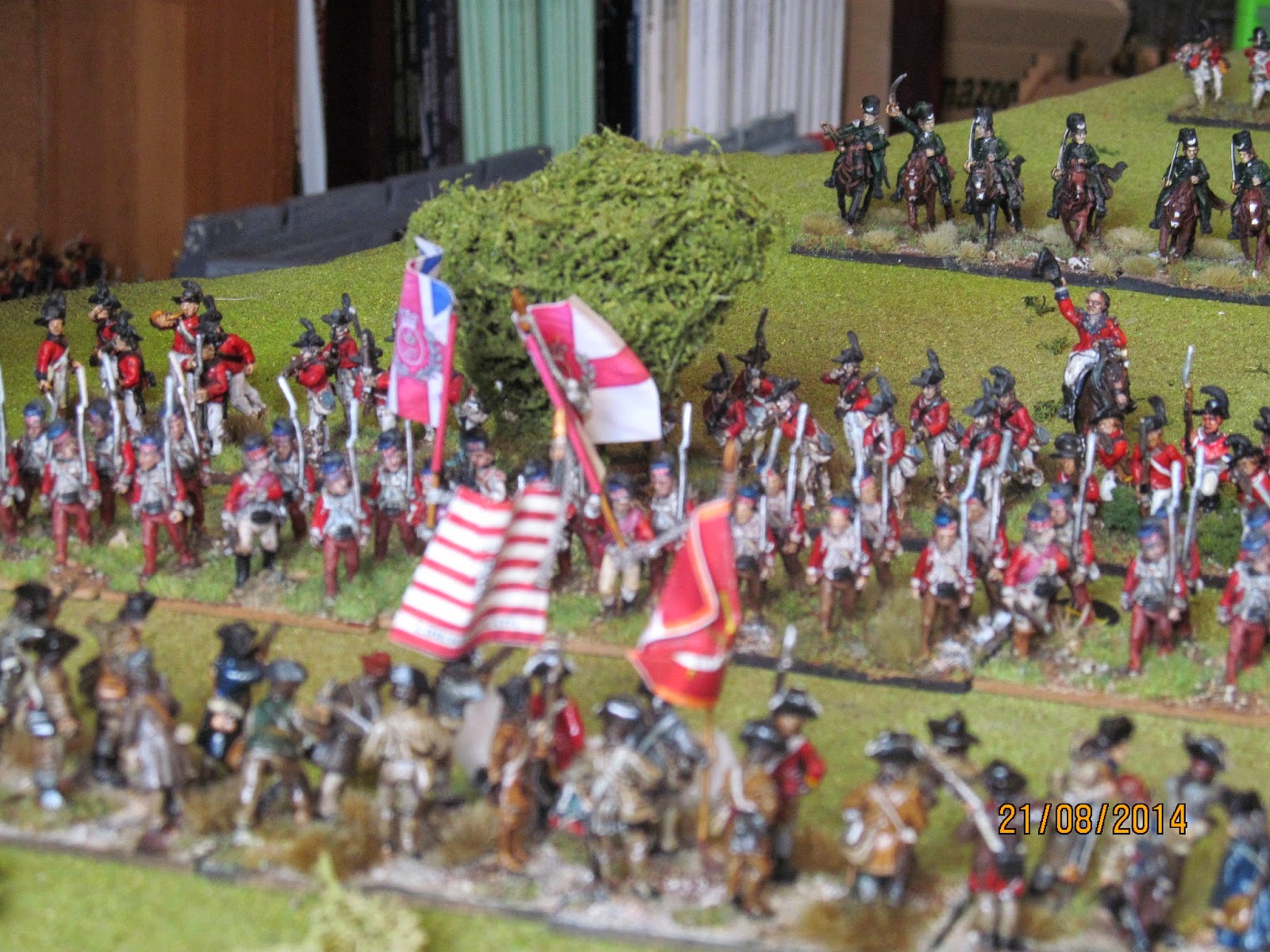 (Above, on the American left the Highlanders and light battalion engage the Continentals, shortly before they are driven off. Below, the Guards deploy facing American troops lining the stream) 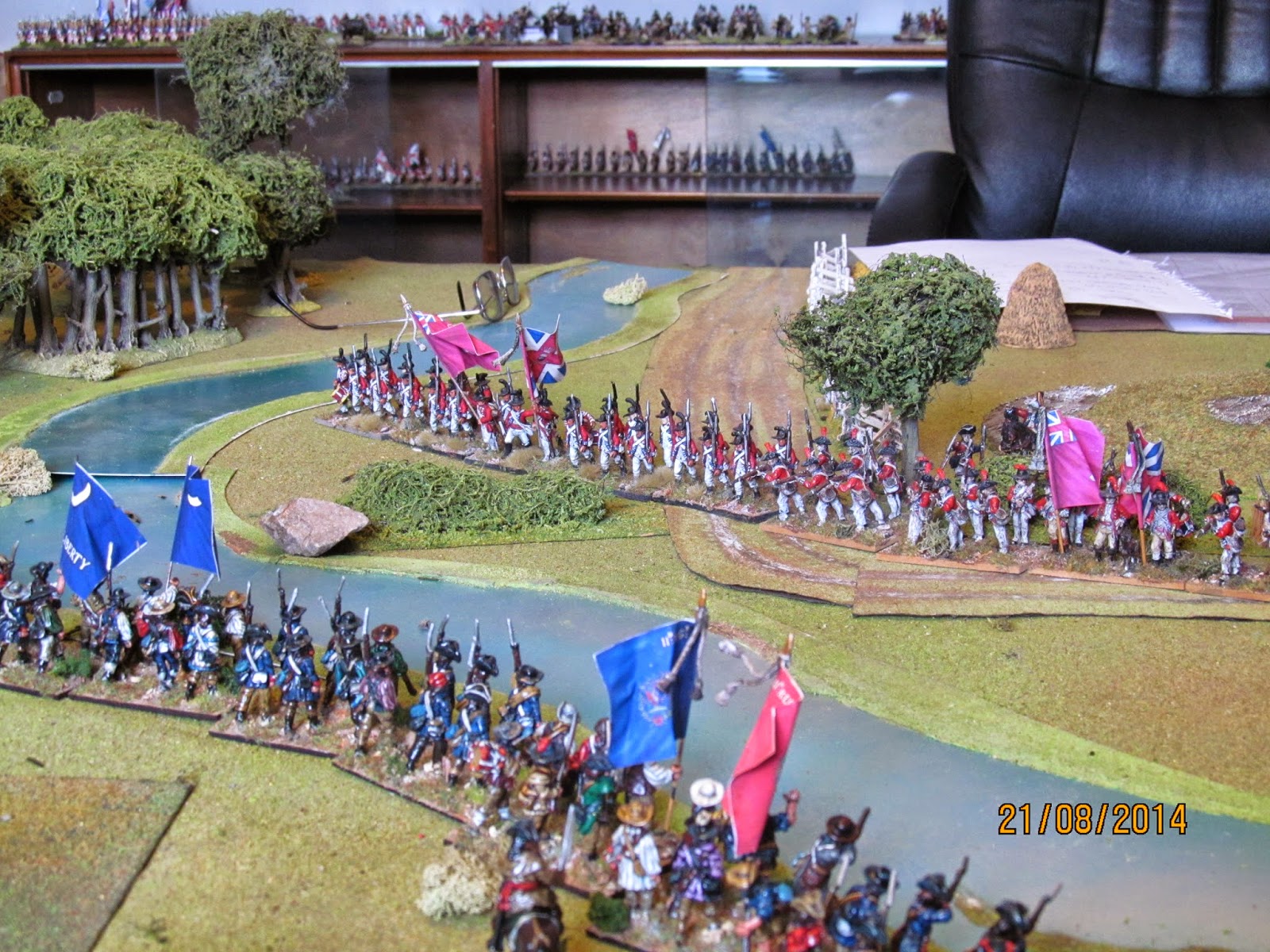 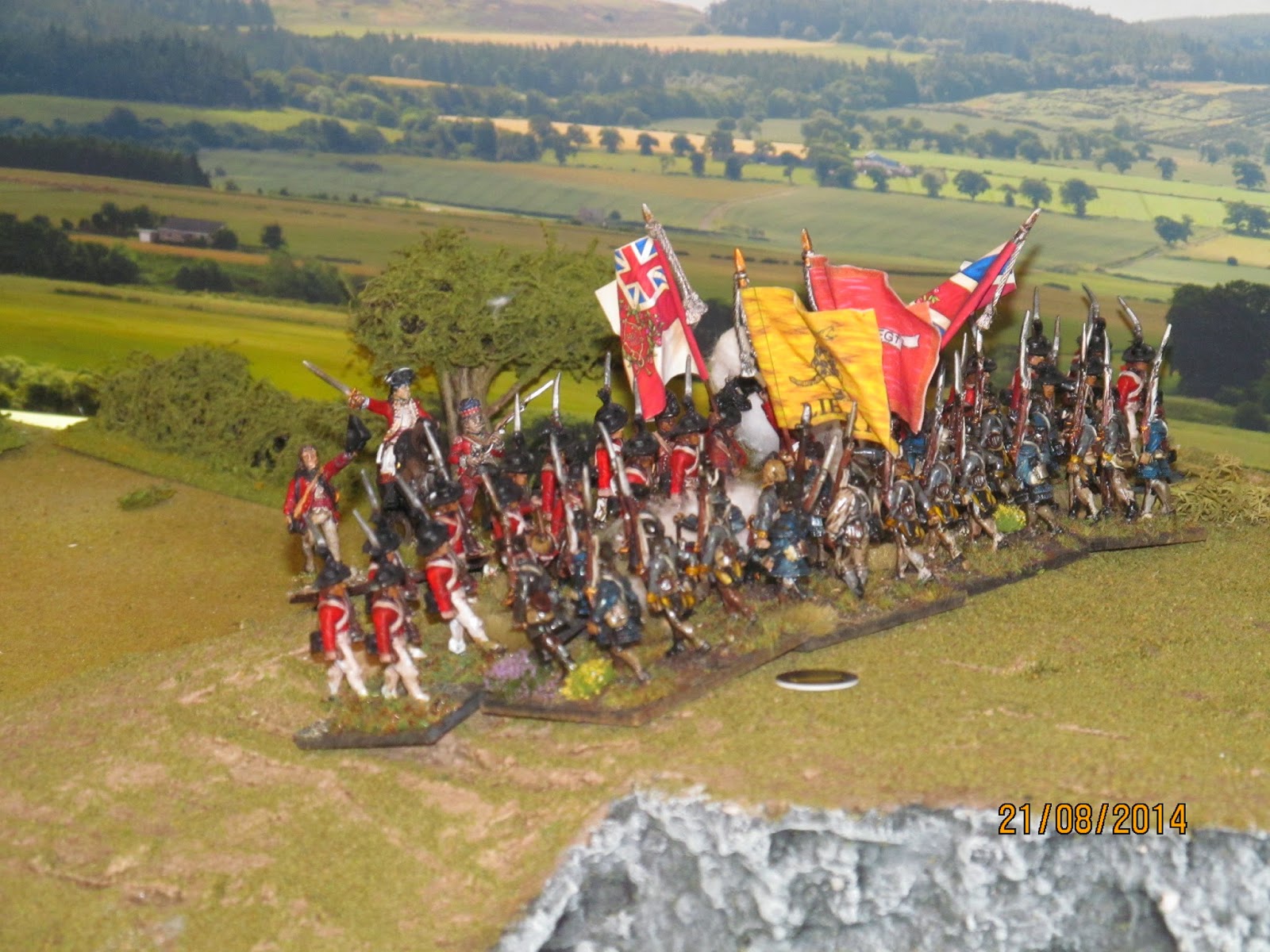 (Above, the British charged the Americans but after two rounds of combat were repulsed. Below, the Highlanders have broken and the Light Battalion is withdrawing in the face of superior American numbers. In the rear HM 63rd Foot advance in support while the Queens Rangers Hussars lurk behind the lights and the Queens Rangers infantry hide behind the orchard on the right of the picture) 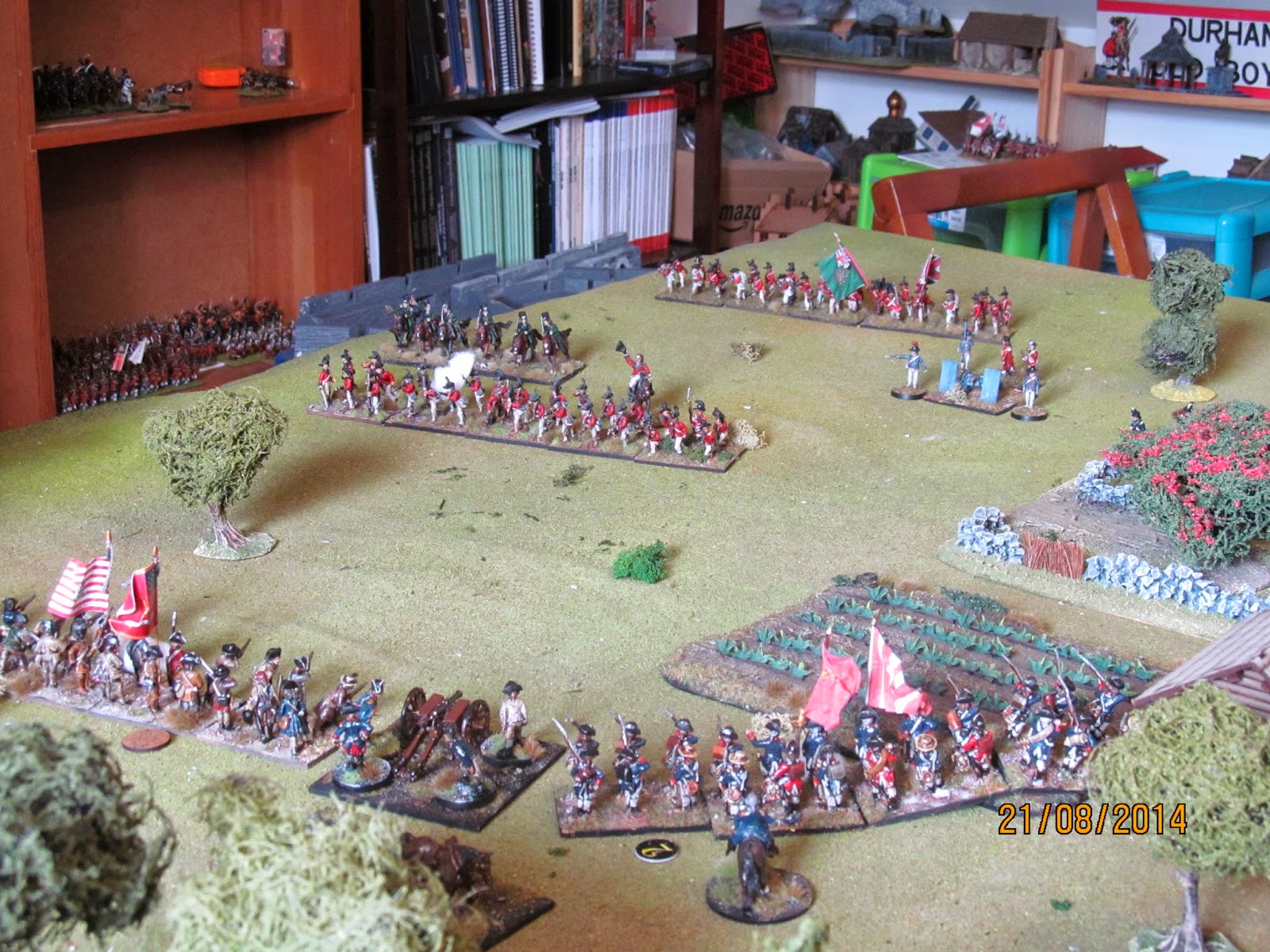 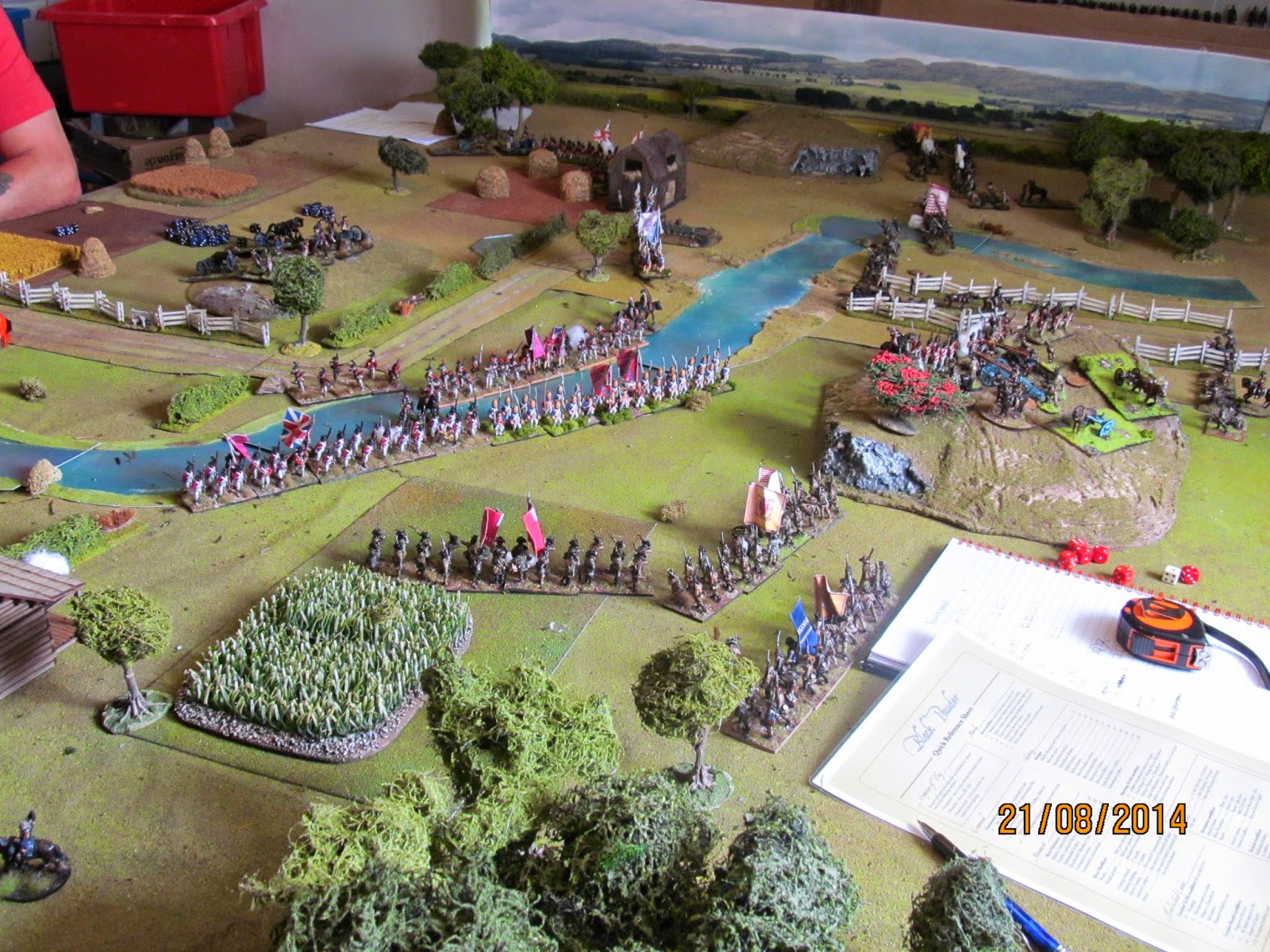 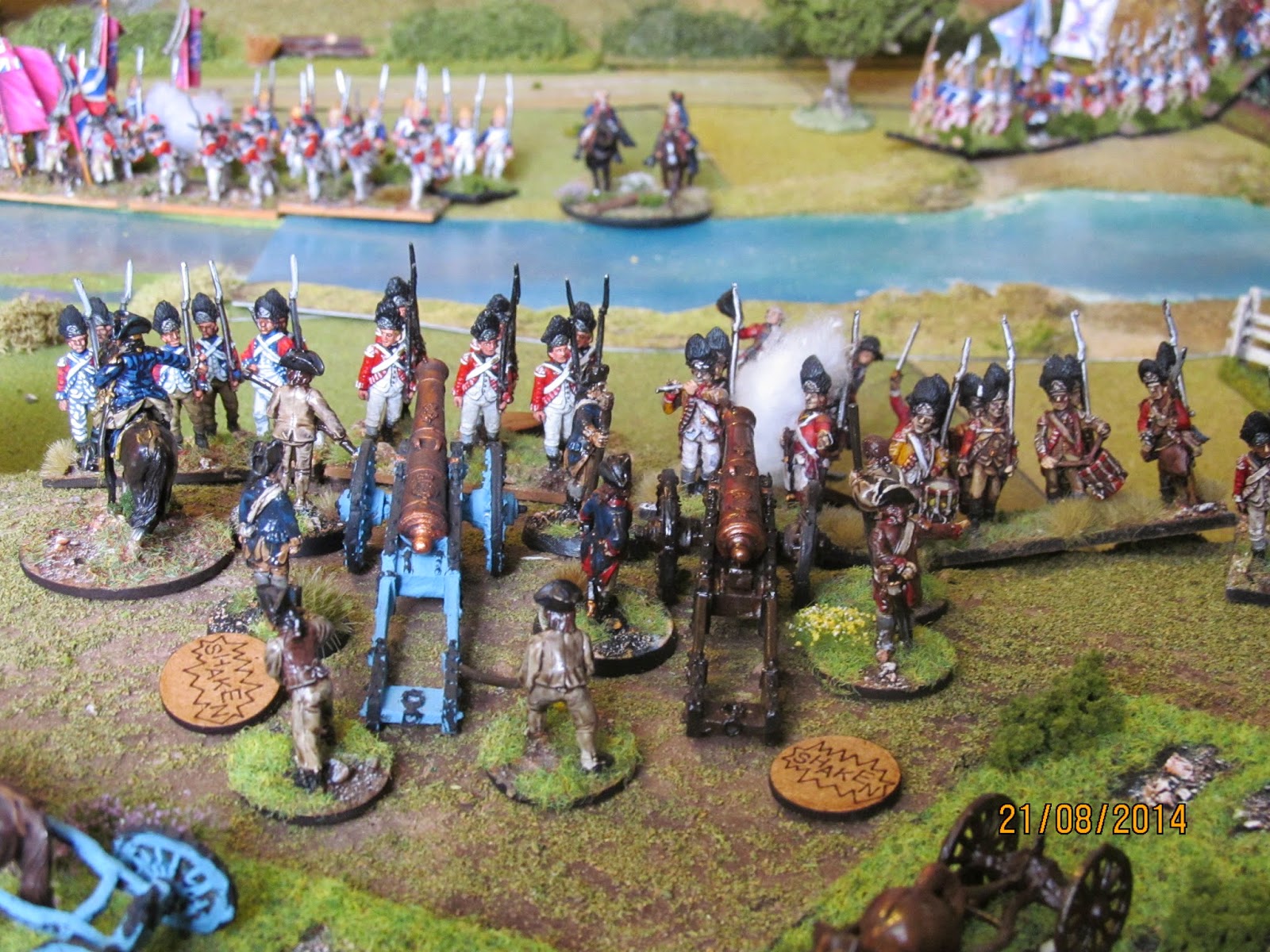 (Above, the Grenadiers successfully assaulted the American artillery positions and destroyed them. Below, the Hessian Grenadier Regiment von Rall advances over somebody's turnip patch!) 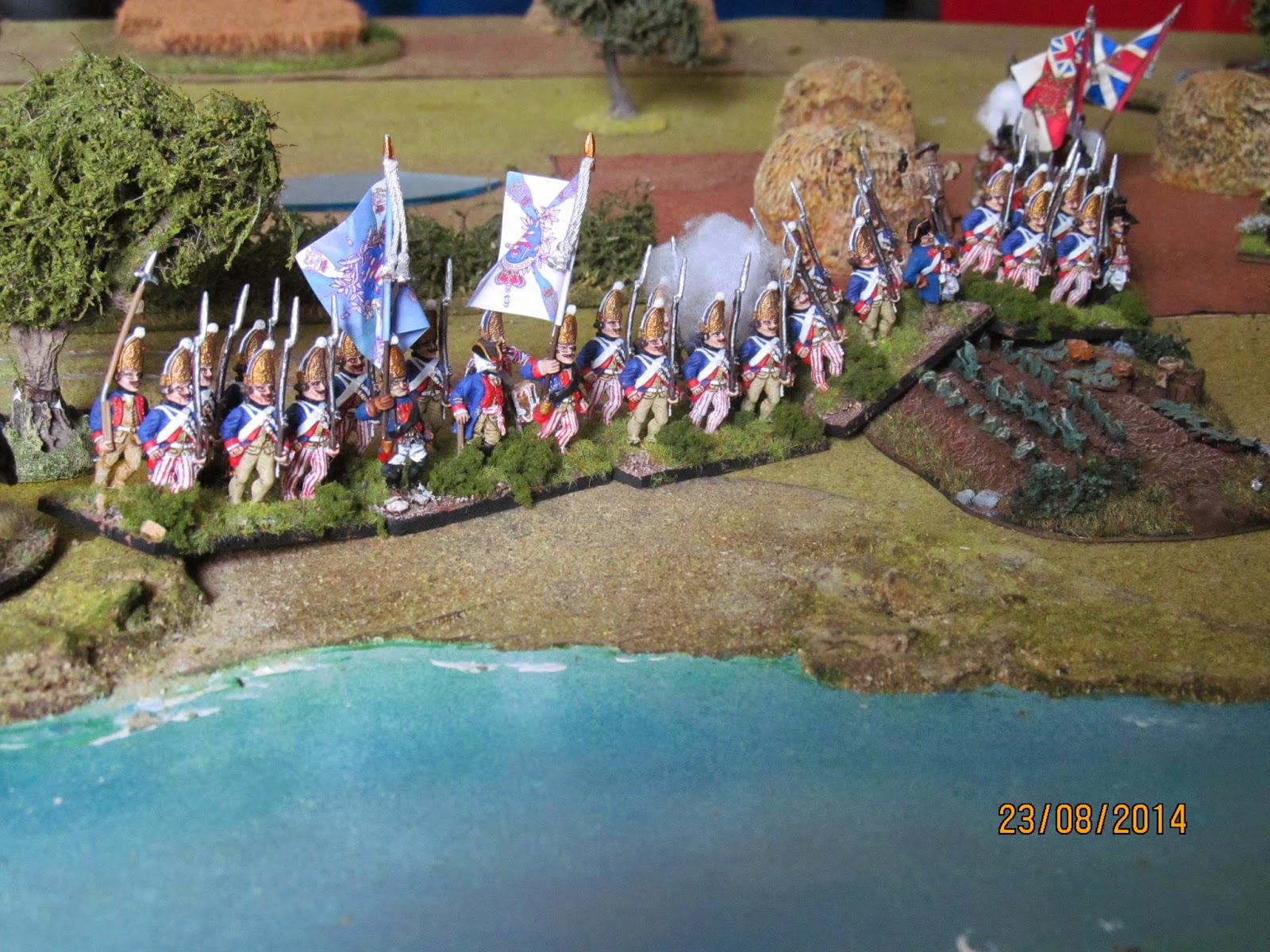 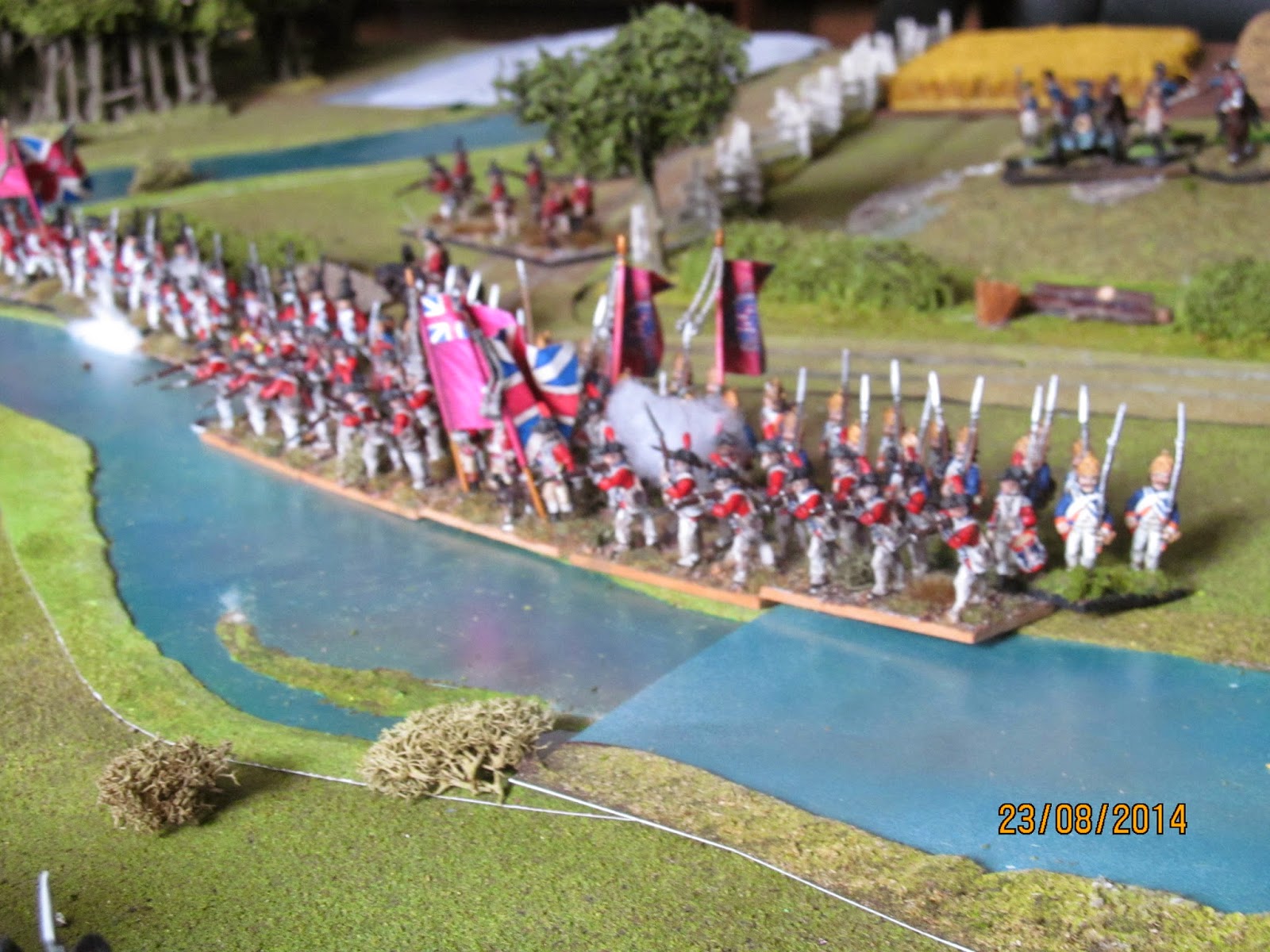 (Above, the Guards, supported by the Hessian Fusilier Regiment von Lossburg prepare have driven off the Americans but were thrown back momentarily by a fierce counterattack). Below, a general view of the fighting as the battle drew to a close). 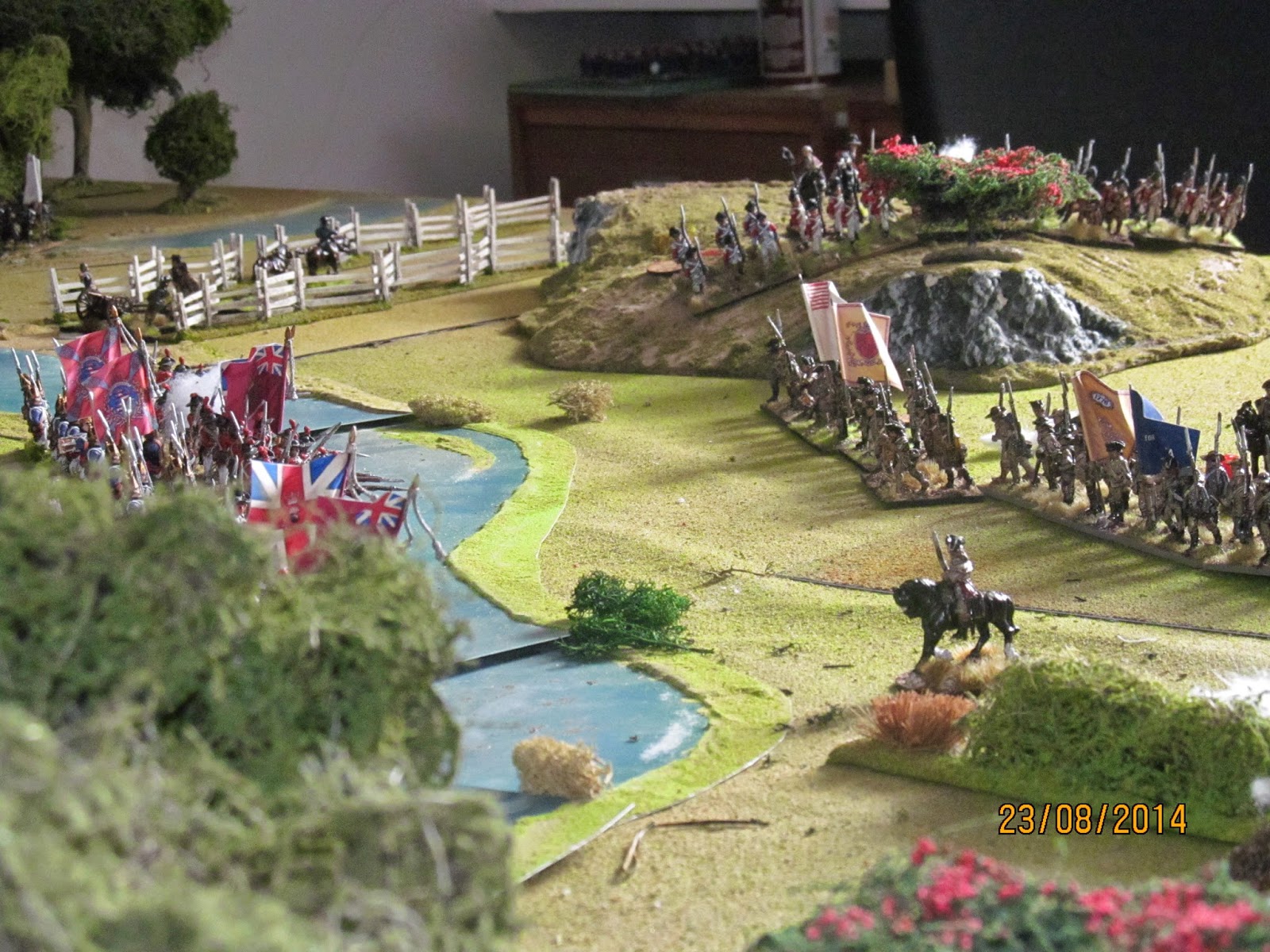 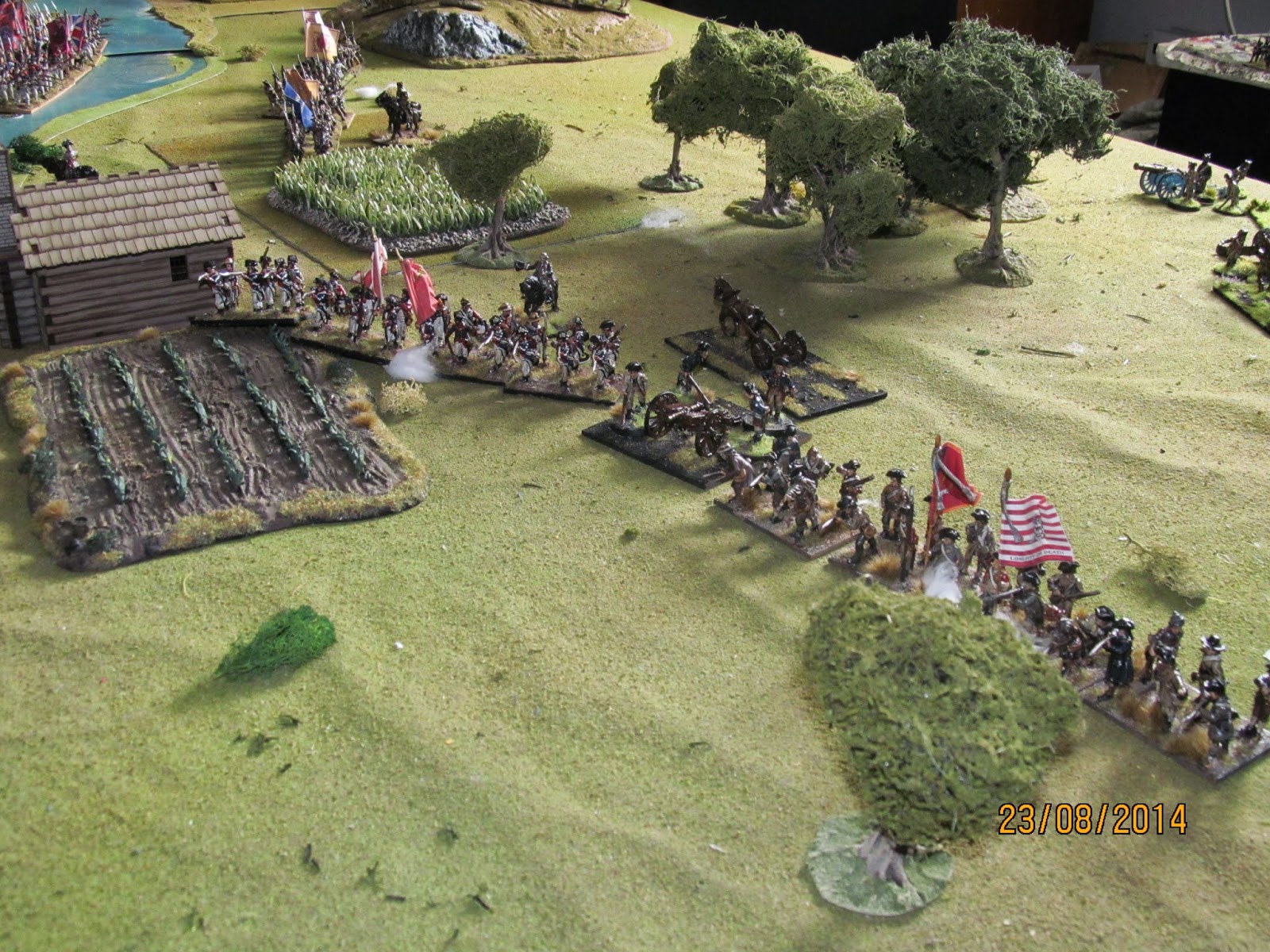 (Above, the unbroken American left flank. Below, the British artillery had occupied a small hill just behind their leading troops and did considerable  damage to American reserves) 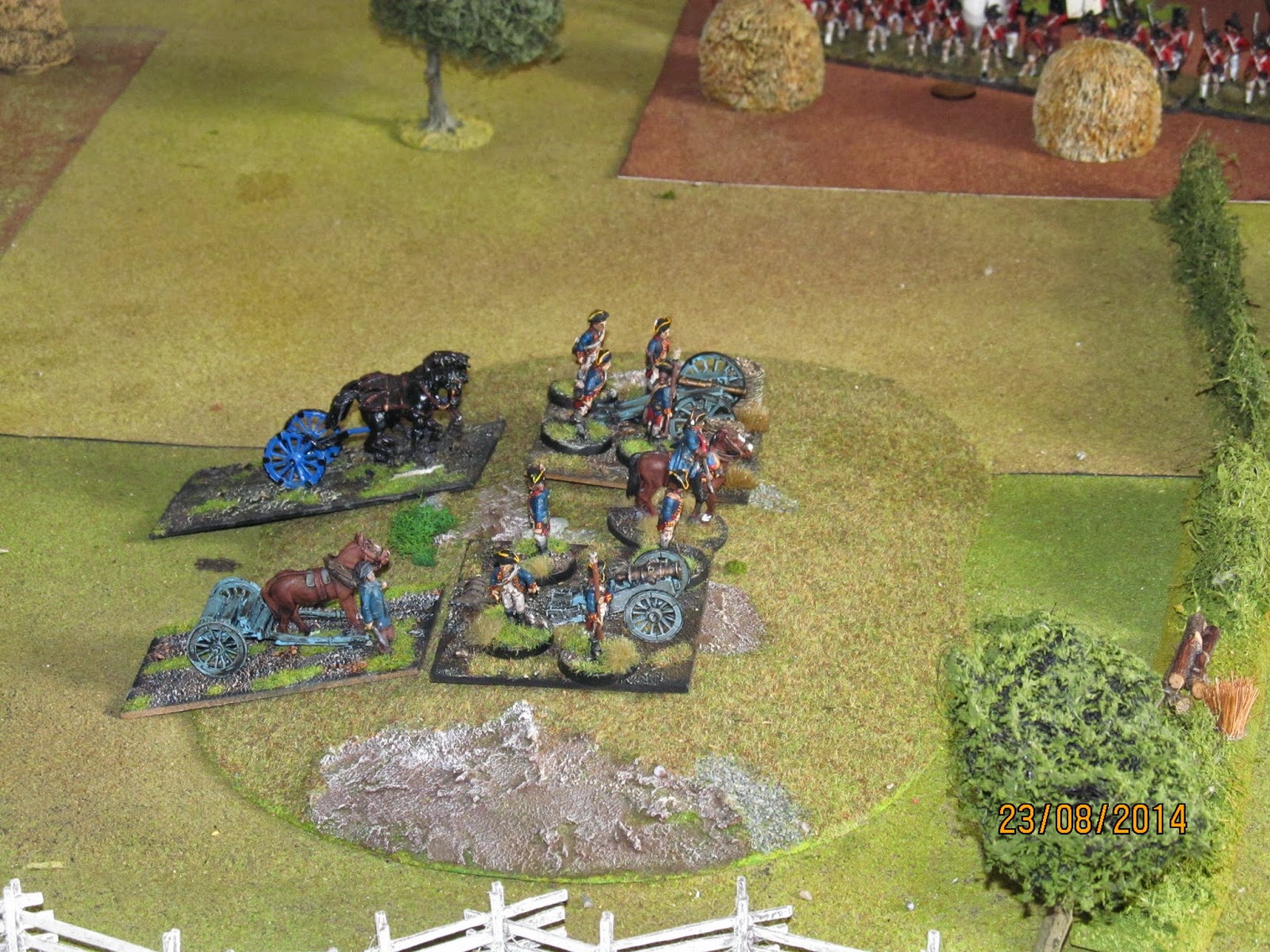 (Below: The end of the battle) 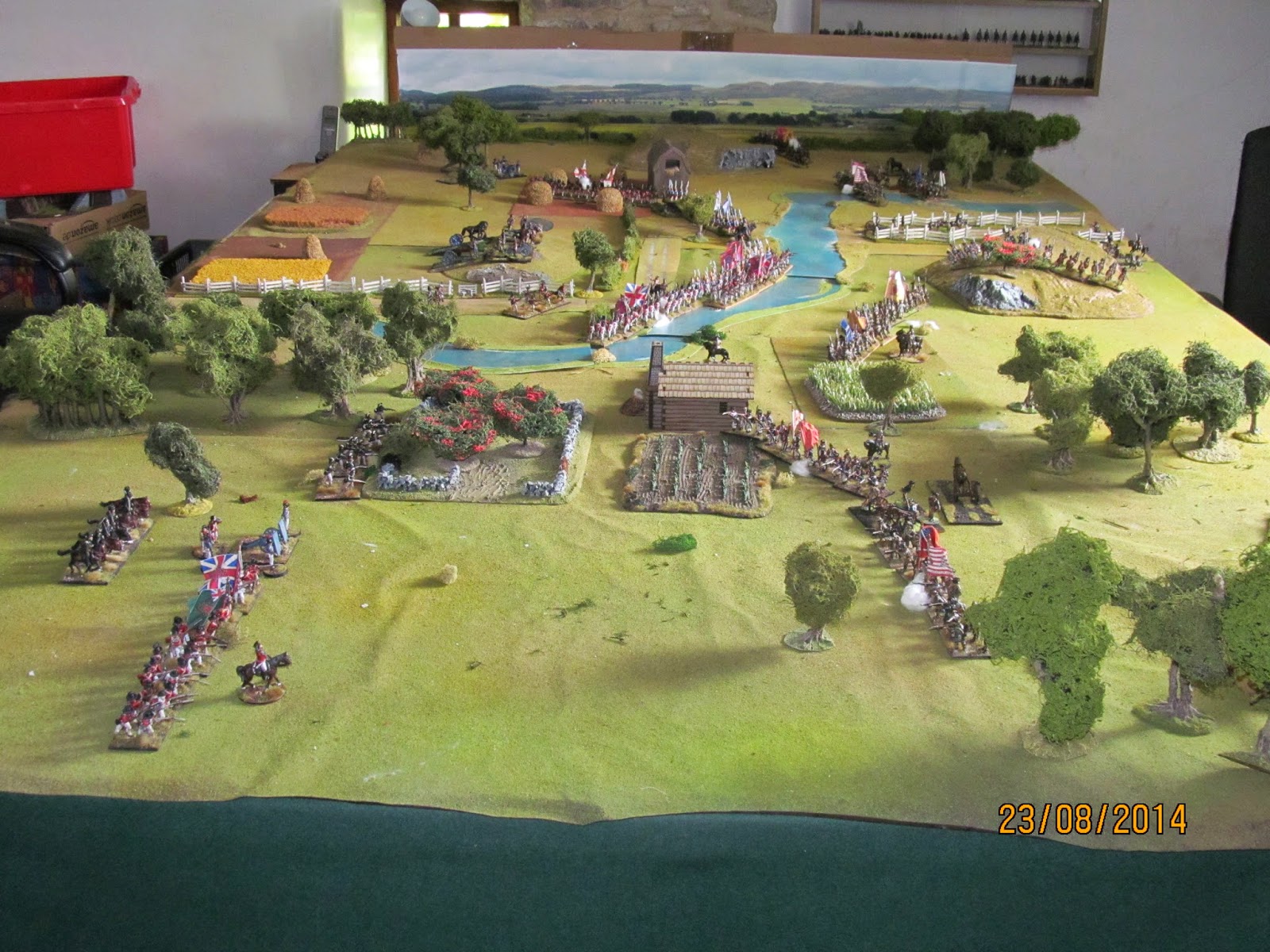 So with half of their army broken or shaken it was all up for the Americans. They had held on their right flank and actually forced  the British back on their left but the centre had been (eventually) broken in spectacular fashion, especially once the Grenadiers had taken the American guns out.

It was a good game and I enjoyed it even though I lost. My only comment regarding the use of the Hail Caesar break test table was that when a unit received a 6 during firing which would normally cause it to be 'disordered' this never happened so it meant that we didn't have units being stopped in their tracks, momentarily halted as a result of firing and therefore temporary out of control. I like this aspect of BP as my understanding is that 'disorder' doesn't really mean disorder in the traditional wargaming sense of the word but more that a unit has become temporarily out of control due to officer casualties, disorientation, smoke, or any number of other factors; even weight or intensity of fire.

Anyway, Paul has tinkered with the table and we shall have another go next time, probably using 19thC forces such as my Crimean or FPW collections. Then again, I will hopefully by then have the new BP AWI supplement which will be good for a few ideas.........
By Colin Ashton - July 25, 2014