The Swedes take some stick at the hands of the Poles, somewhere near Gdansk, 1629

Paul came up yesterday for our monthly game. As a change I decided to set up a 17thC game between my Swedes and Poles, using Warlord Games' Pike and Shot rules. I've never liked their idea of army composition and troop types and capabilities for any army from the Thirty Years War or for the Poles, as neither seem to bare any resemblance to any historical orders of battle or even a cursory look through appropriate reference materiel. The rule mechanics are good for a big game though and there's nothing to stop anyone tinkering as they see fit to the army composition etc, (which I do). So, I persevere and await the imminent arrival of the TYW supplement with interest...... There are some subtle difference between P&S and Black Powder, which I forgot to tell Paul about, but I don't think it changed the end result of the game.

The scenario required the winners to control a bridge and a road junction, as well as to inflict as much damage on the enemy army as possible in the process. Significant terrain features included a crossable river (half a move to get across), hills blocking line of sight and some woods, impenetrable to all but shot and skirmish type foot, e.g. dismounted dragoons. And a village which could be occupied by shot. Everything else was purely for visual effect.

The Winged Hussars are very tough (save on 3+ and 'Stubborn' giving them one re-roll of a failed save each turn) and killers in melee (10D6).

The Swedish cavalry were going to be no match for the winged hussars, i.e. my cavalry was going to be crushed by the winged hussars but ought to have been able to hold their own against the pancerni. My 'plan' was to use my vastly superior firepower to whittle down the Polish cavalry (hussars and pancerni) and try and keep them disordered for as long as possible. I wasn't expecting to have to worry about their light cavalry or the infantry.  Plans never survive first contact with the enemy!

I deployed first as we assumed that I would probably be out scouted by the Poles with their cavalry superiority. I placed my infantry in the centre, flanked by the two large cavalry wings, with guns on a small hill right centre and the cuirassiers held back in reserve. Paul deployed the Poles pretty much as their order of battle suggests. 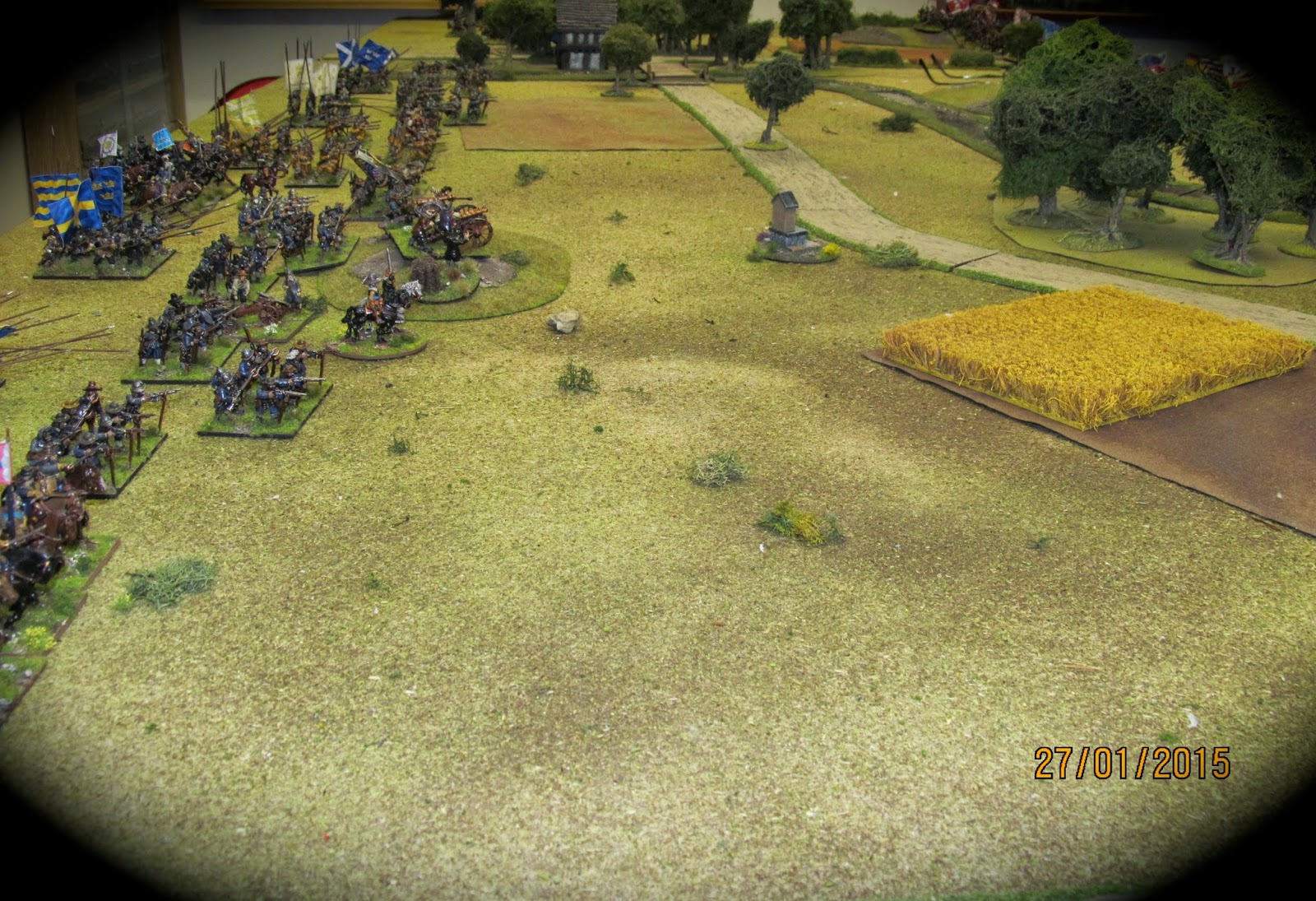 The Swedish army deployed to receive the Polish attack. 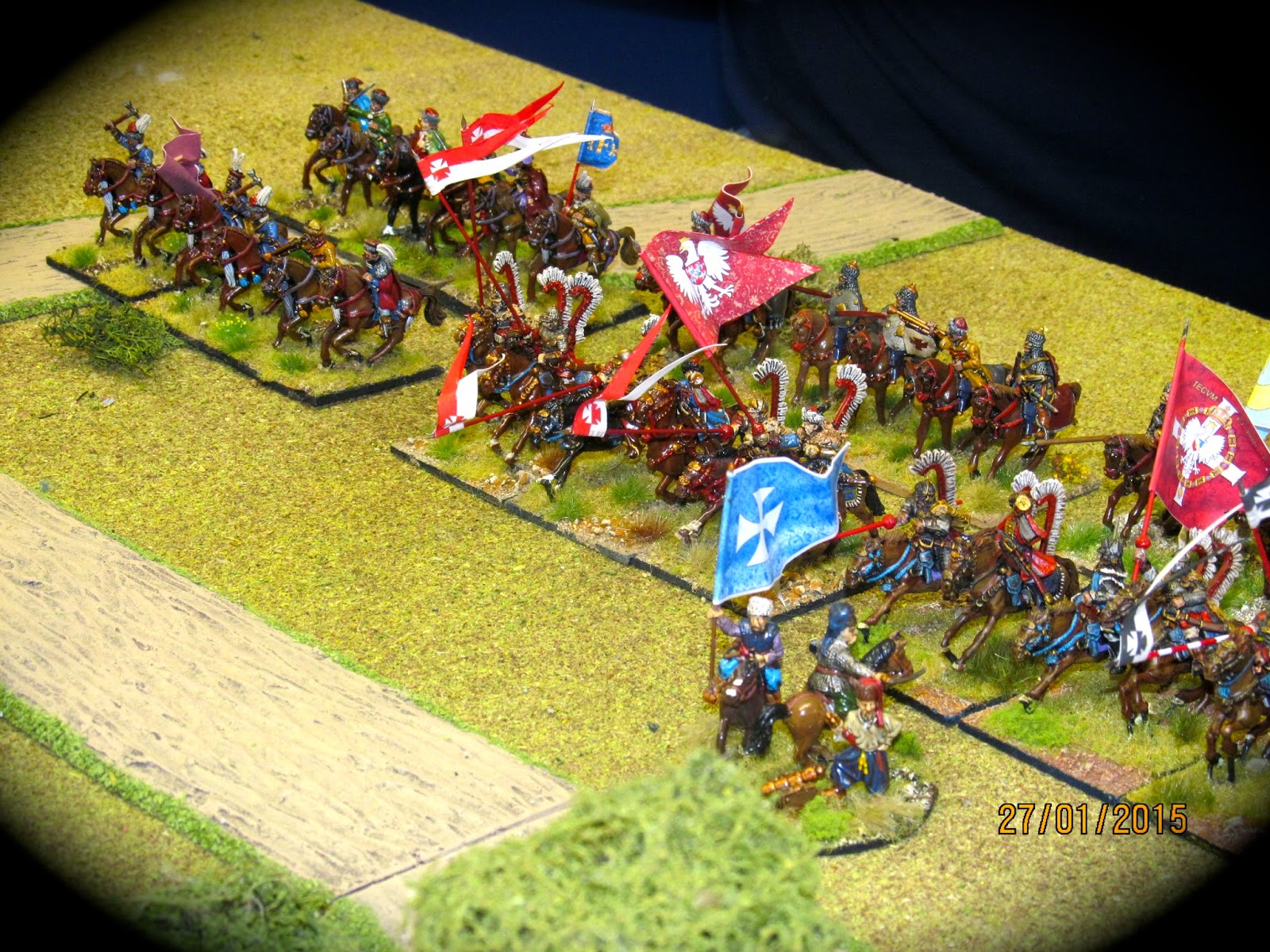 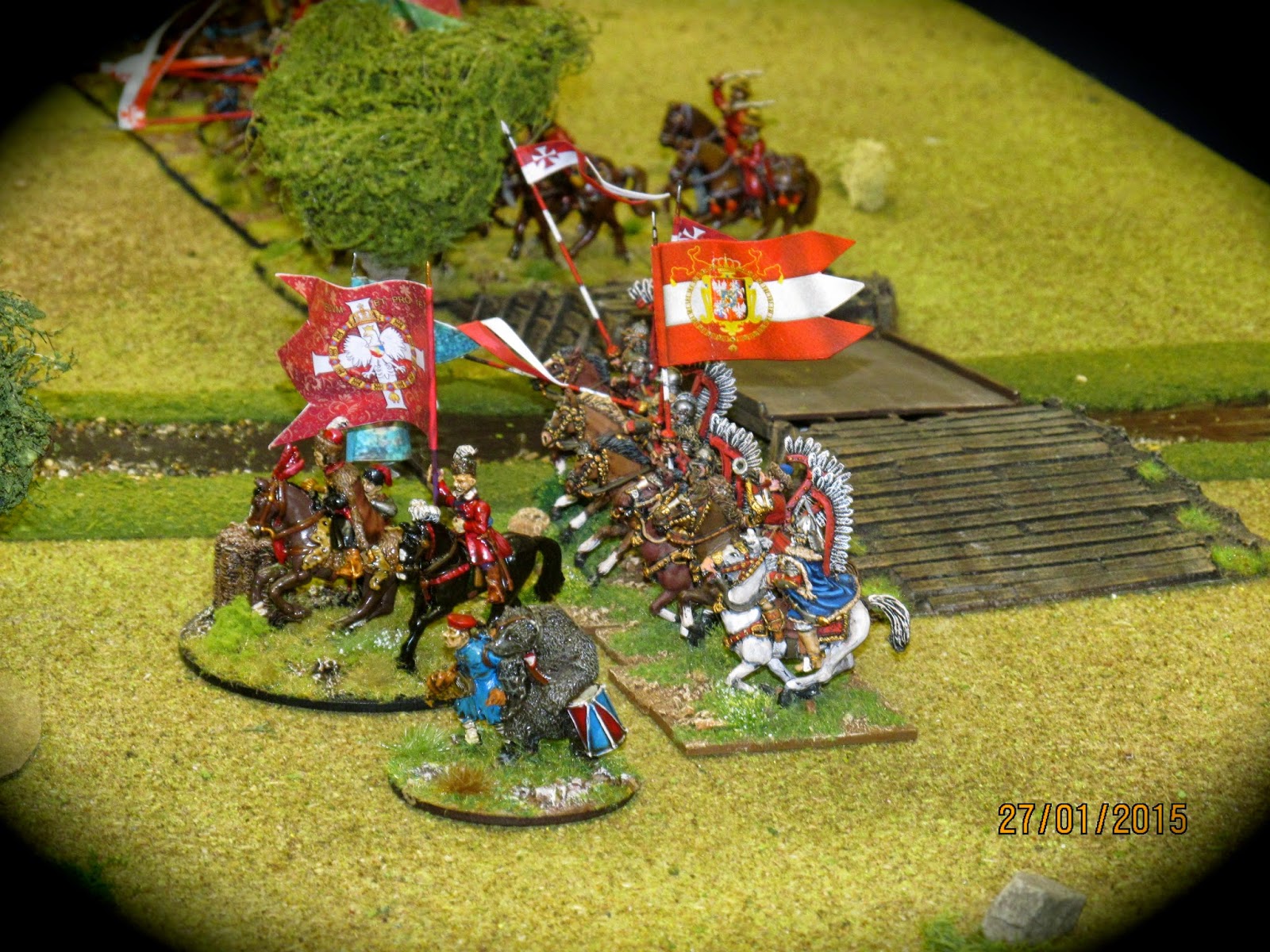 The Polish commander in chief and his bodyguard. (I had a spare unit of Winged Hussars; thanks Jim!) 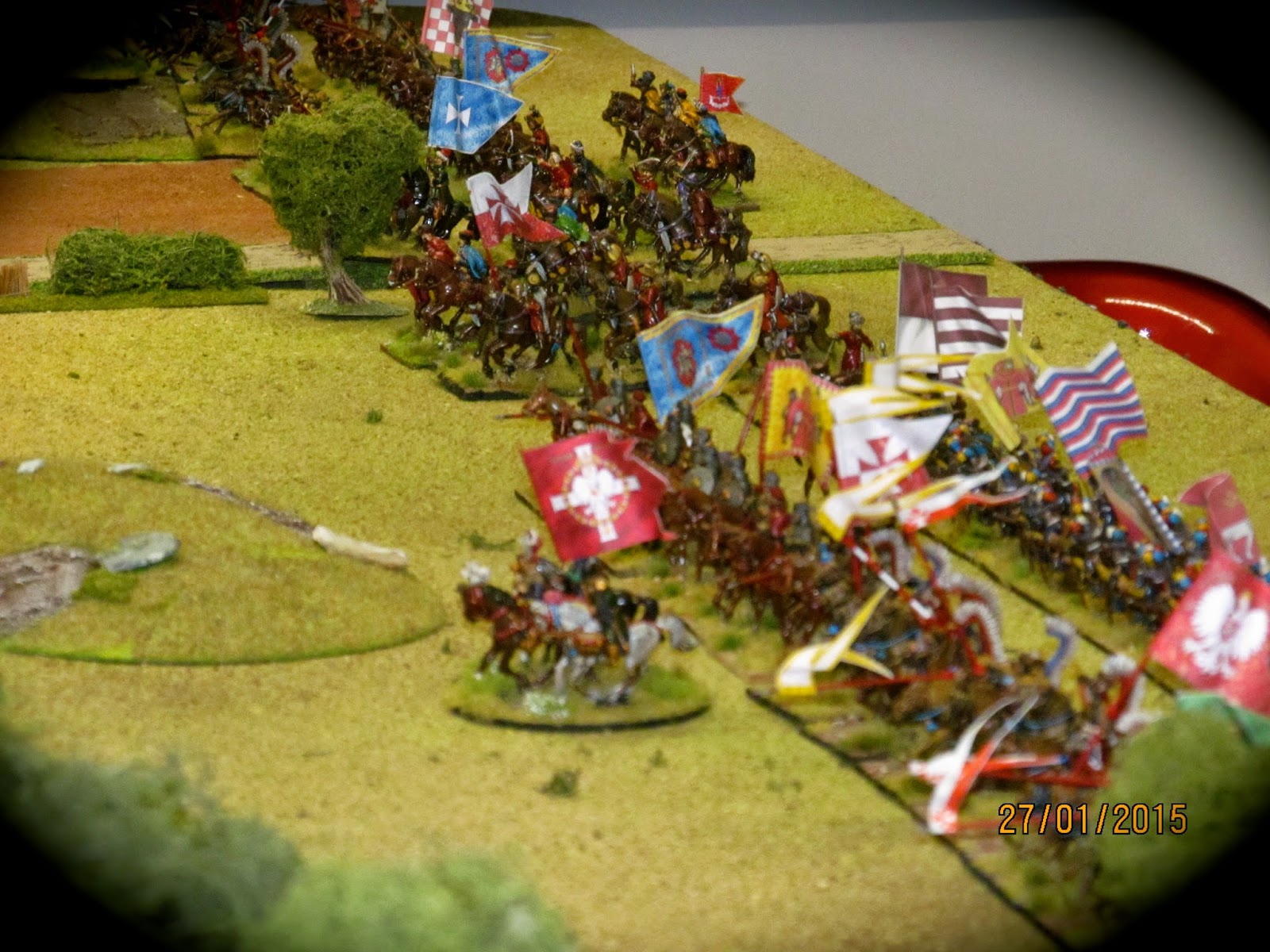 The Polish centre with the infantry reserve to the rear. The infantry only moved twice during the entire game, much to annoyance of the Polish commander! 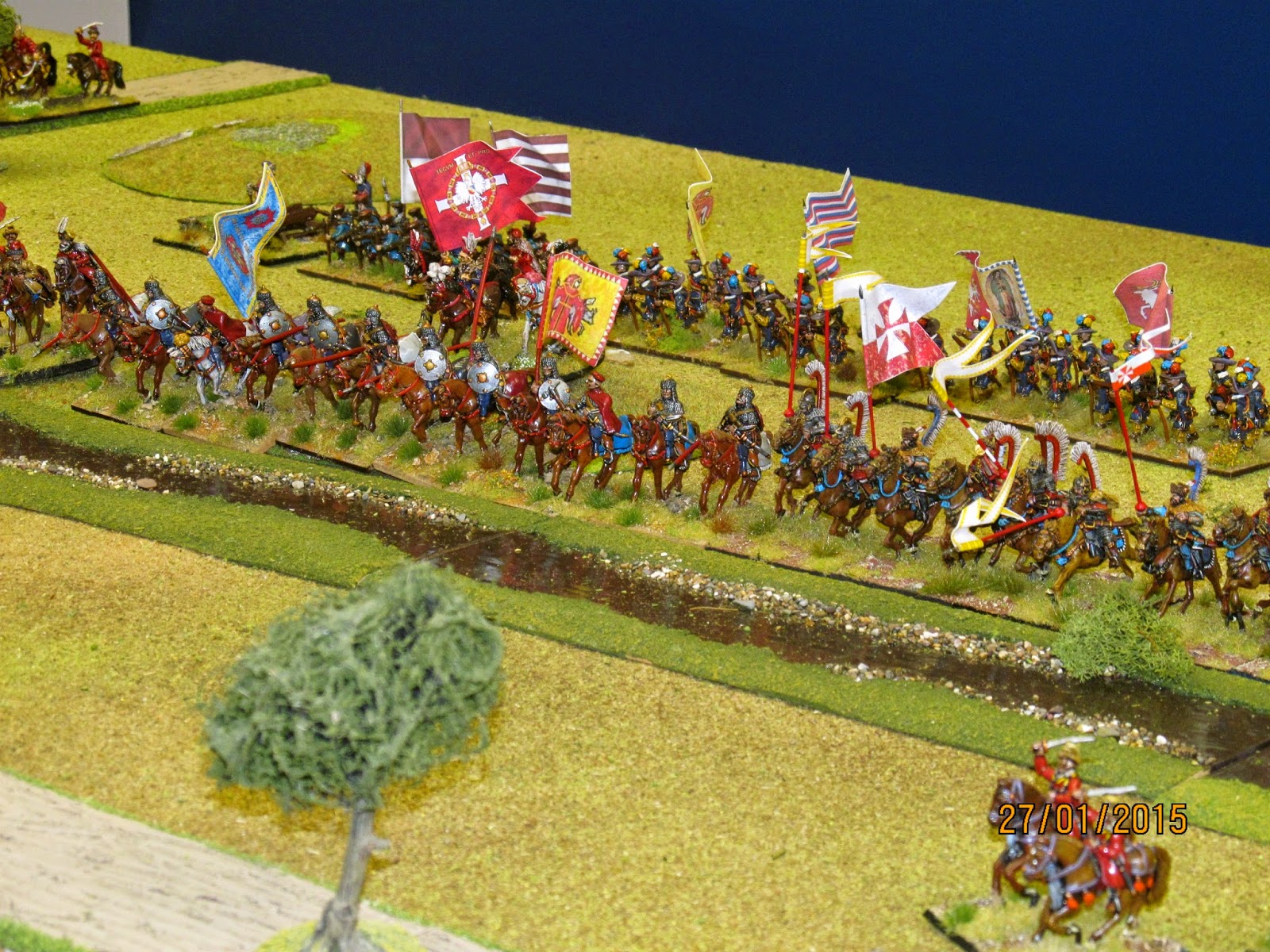 The Polish centre lumbers forward and once at the riverbank started to attract musket and cannon fire from the Swedes which caused a few casualties and temporarily disordered most units in the front rank. 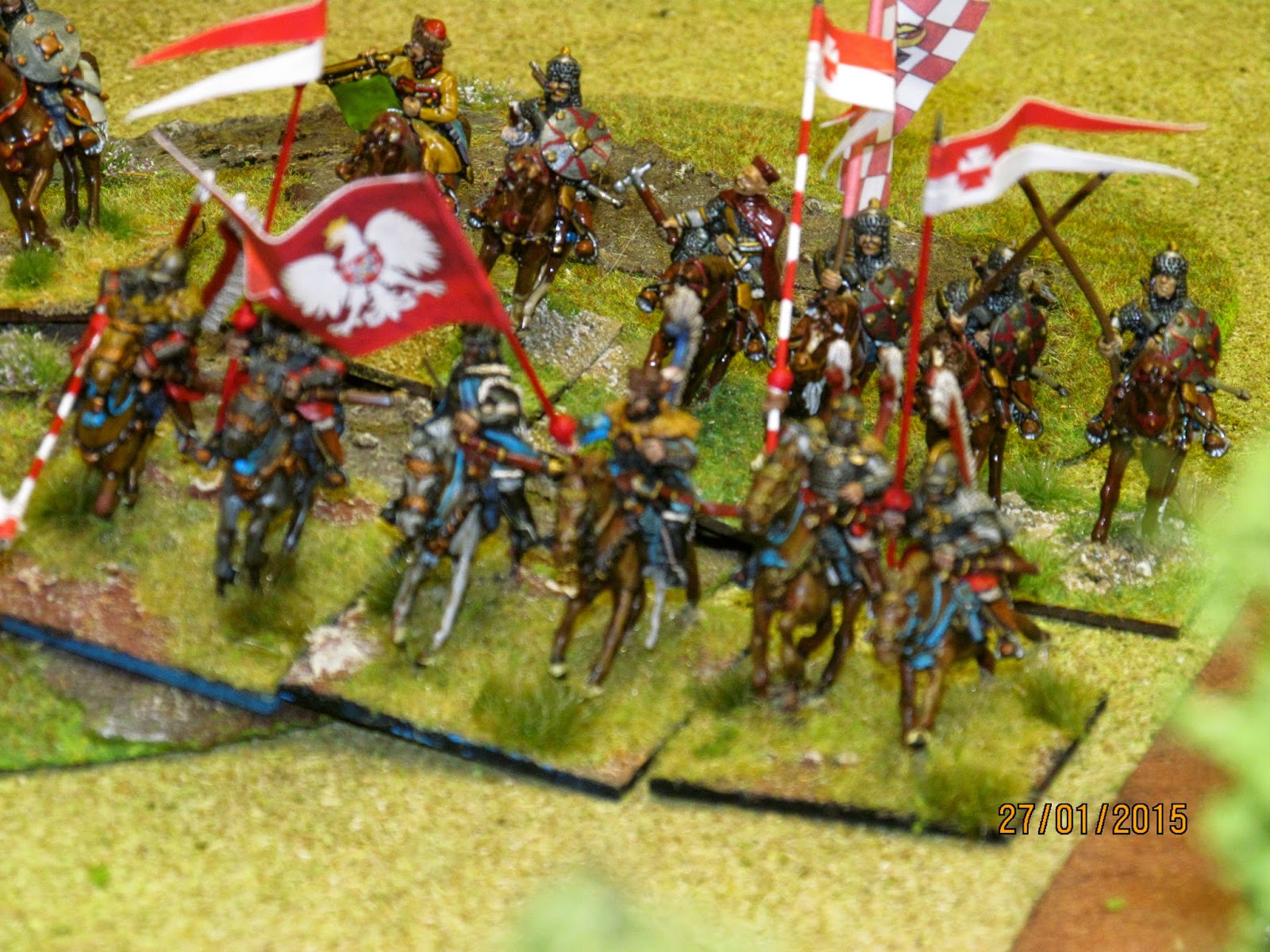 The Polish right wing closes on the outnumbered Swedish cavalry before sweeping them away. 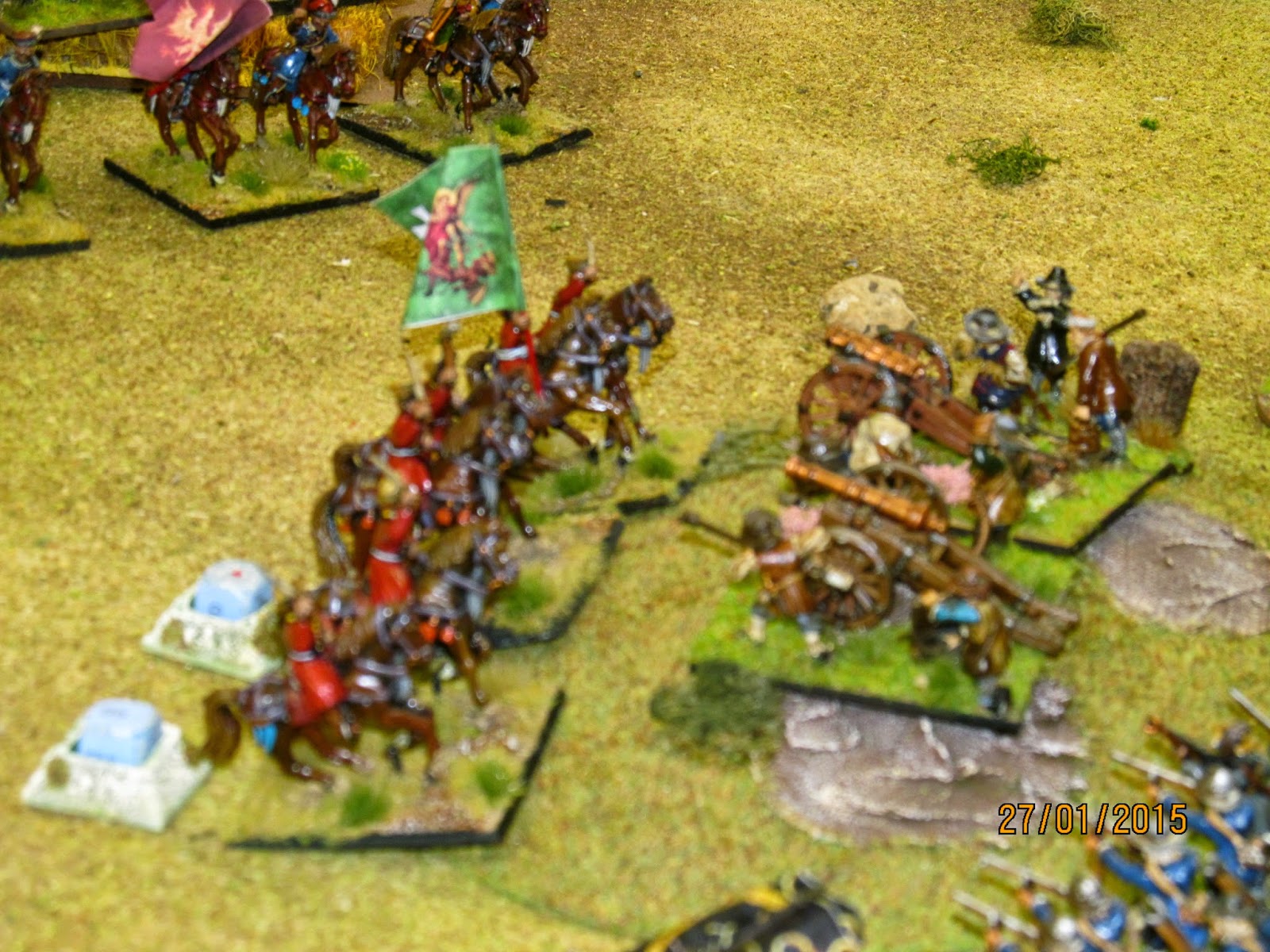 Cossacks charge the Swedish artillery. They managed to close on their second attempt and drove off one gun crew before falling back. (Dreadful dice from Paul saved the gunners) 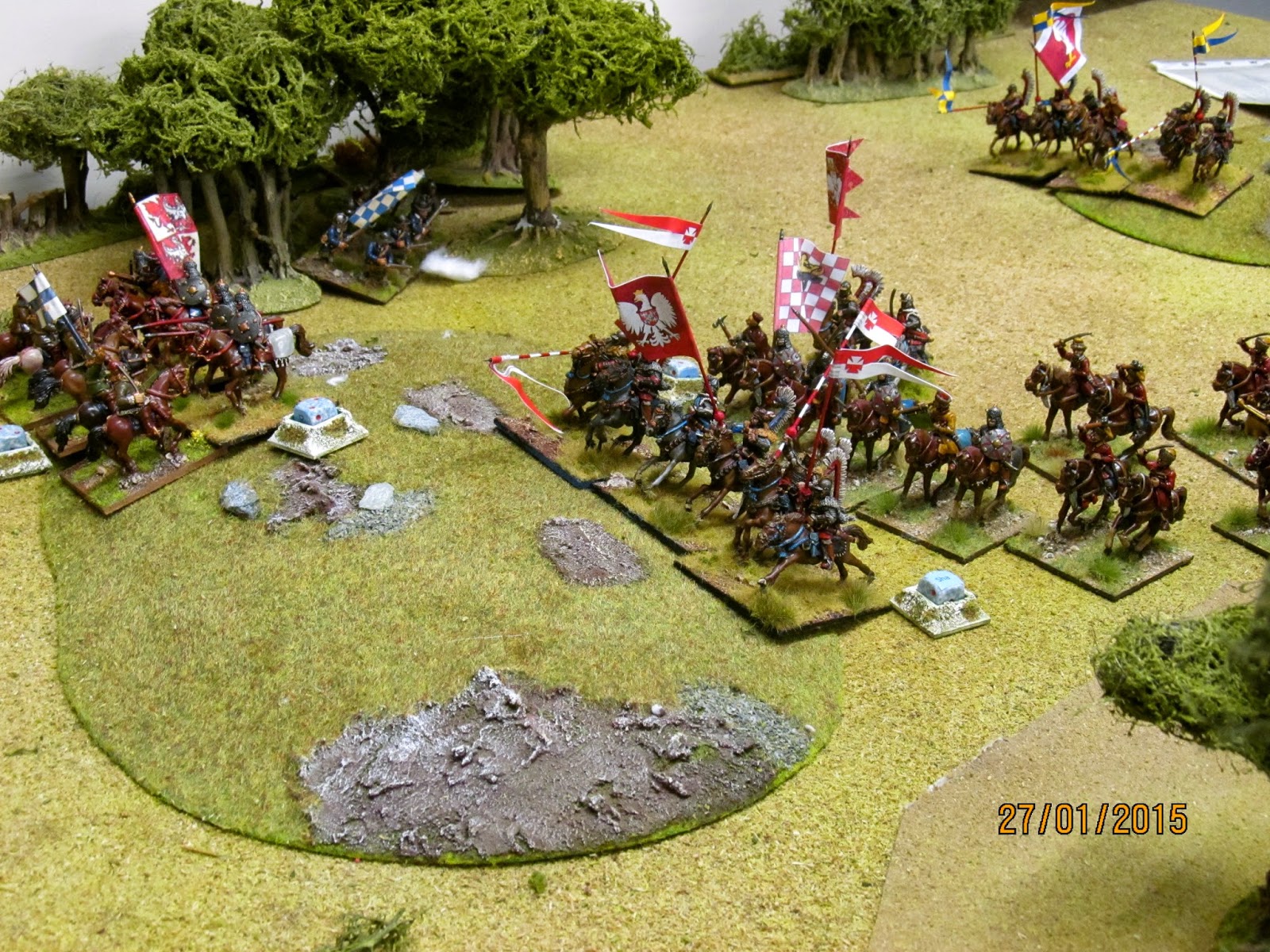 The Polish right again after vanquishing their opponents. The much lighter Swedish and Finnish horse couldn't stop the Poles but they did hurt them. One unit of hussars was forced back and Swedish commanded shot in the woods caused a few casualties and disorder in the ranks for a while. 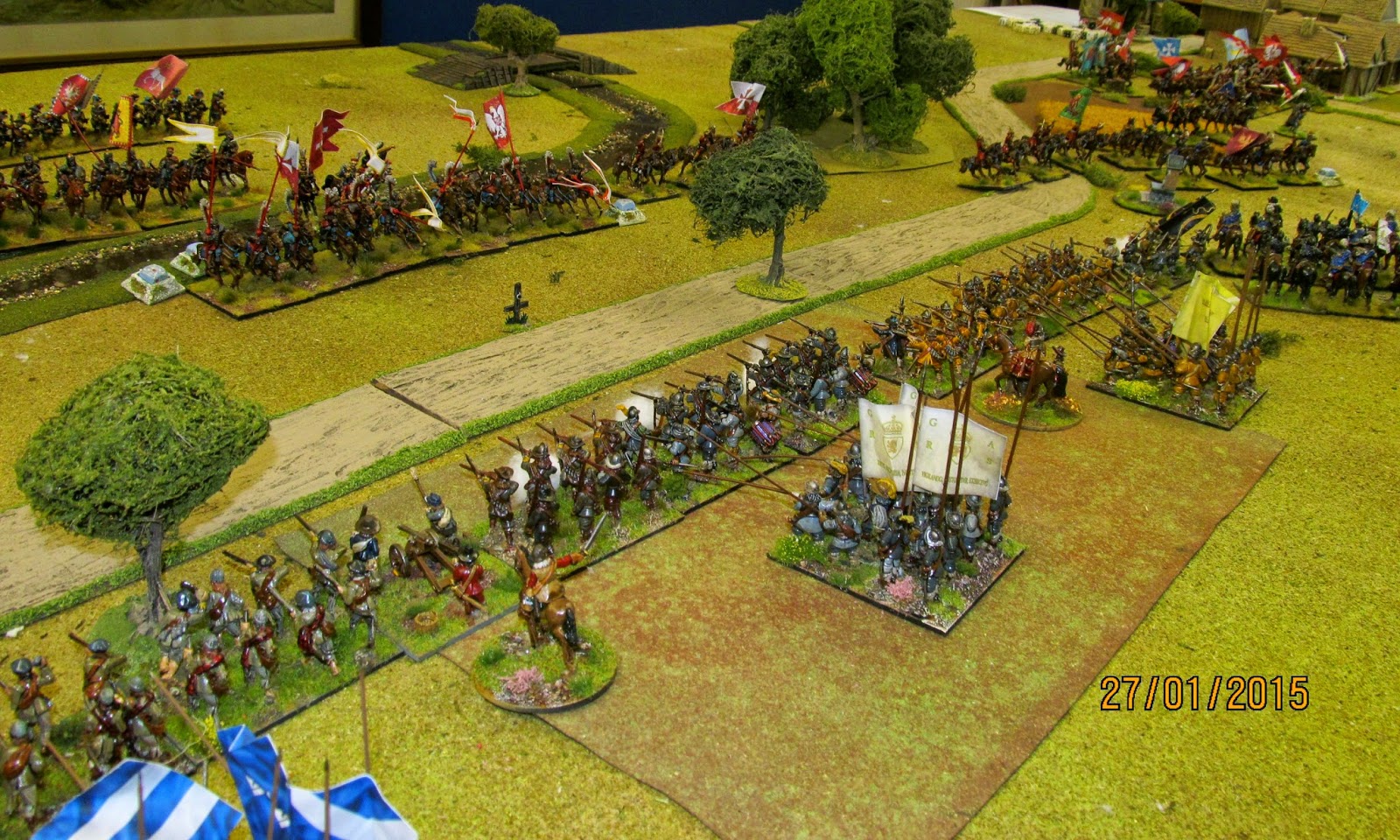 The main Swedish battle line just before one unit of hussars charged home and broke two units of shot. I should have fallen back under the pikes but foolishly thought I could drive them off with musketry! 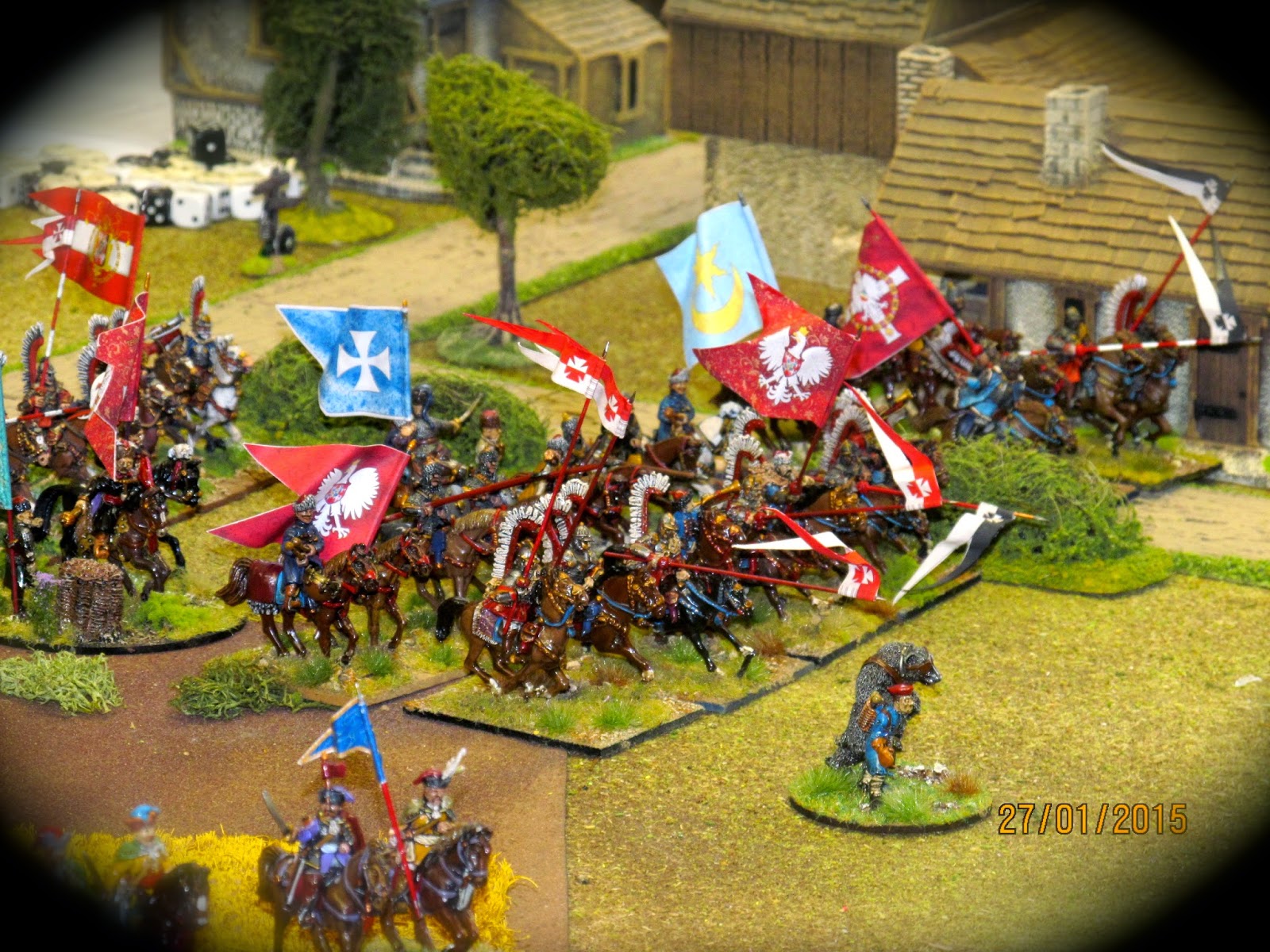 The Polish left advances past the village towards the waiting Swedish horse. 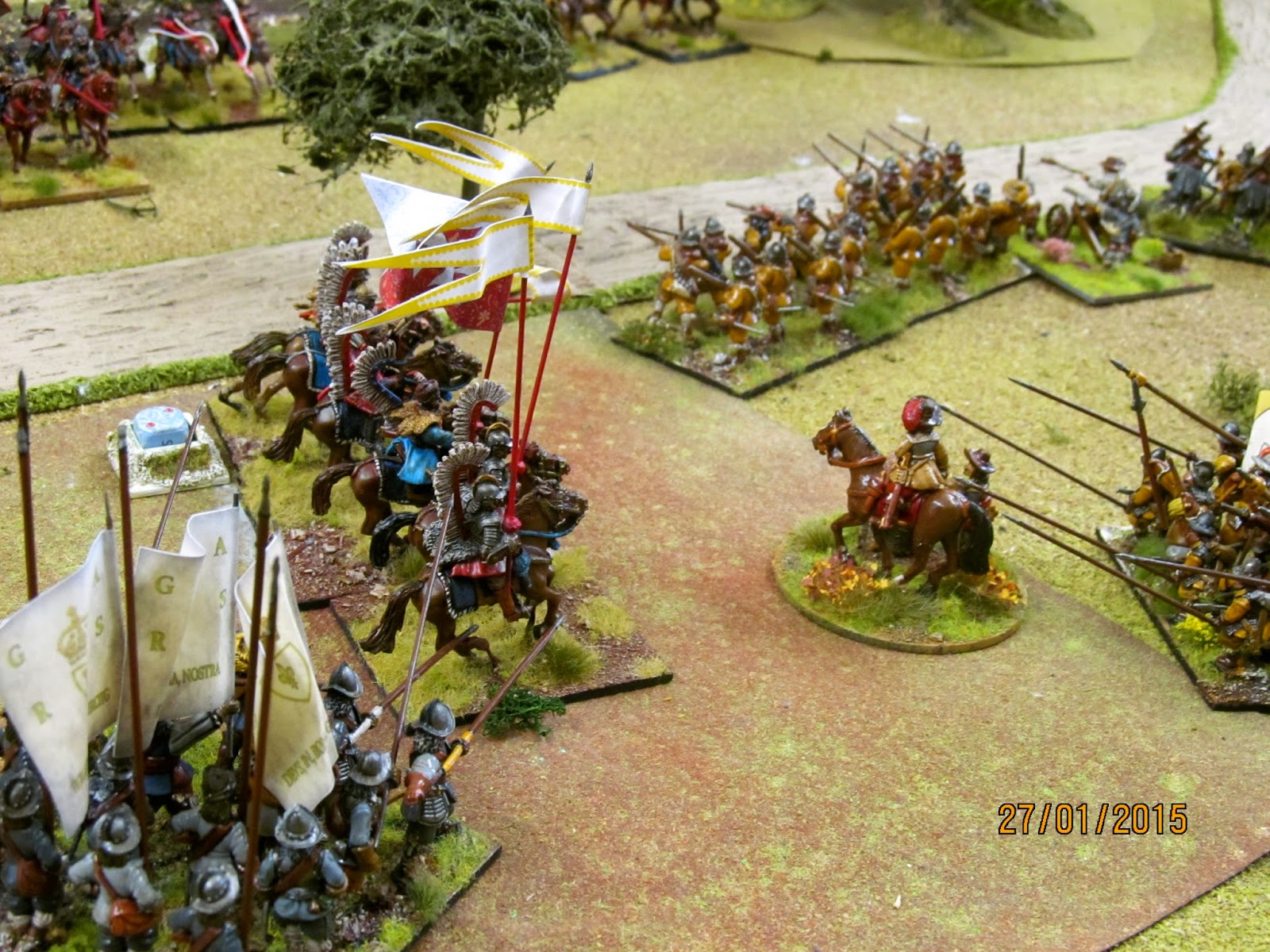 After breaking a hole in the centre, the hussars carried out a sweeping advance onto the flank of a unit from the elite Swedish Yellow regiment. Amazingly (i.e. thanks to some excellent saves and a high break test score) the shot held long enough for the Pike block on the left to hit the hussars in the rear. Cossacks from the Polish right wing who had swung round towards the centre then hit the pikes in the rear, and the cossacks were in turn hit by a unit of Swedish shot. A very confusing melee which in the end saw the Cossacks break and the hussars were forced to retreat. 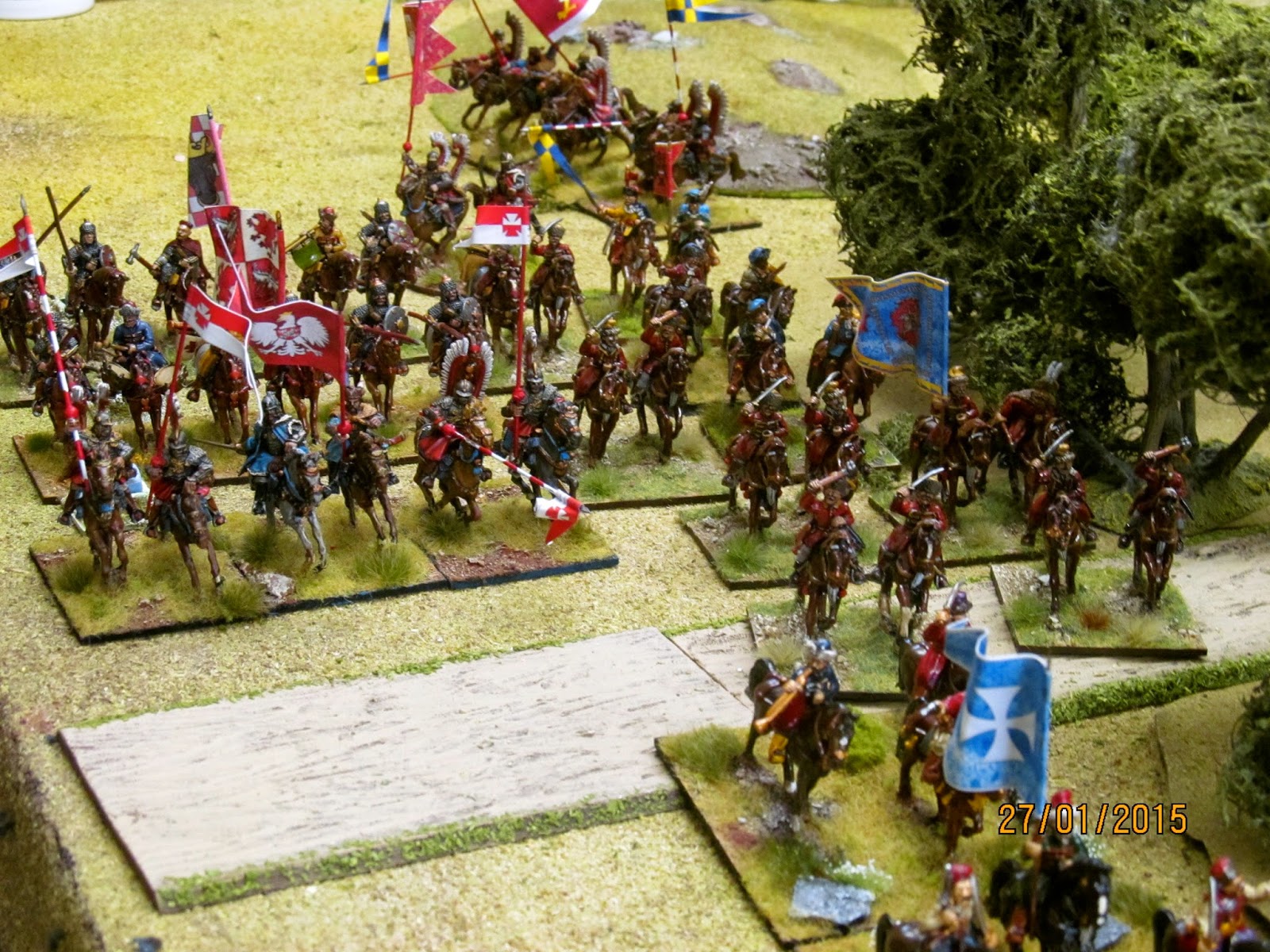 The Polish right wing sweeping round behind the woods and the Swedish rear. 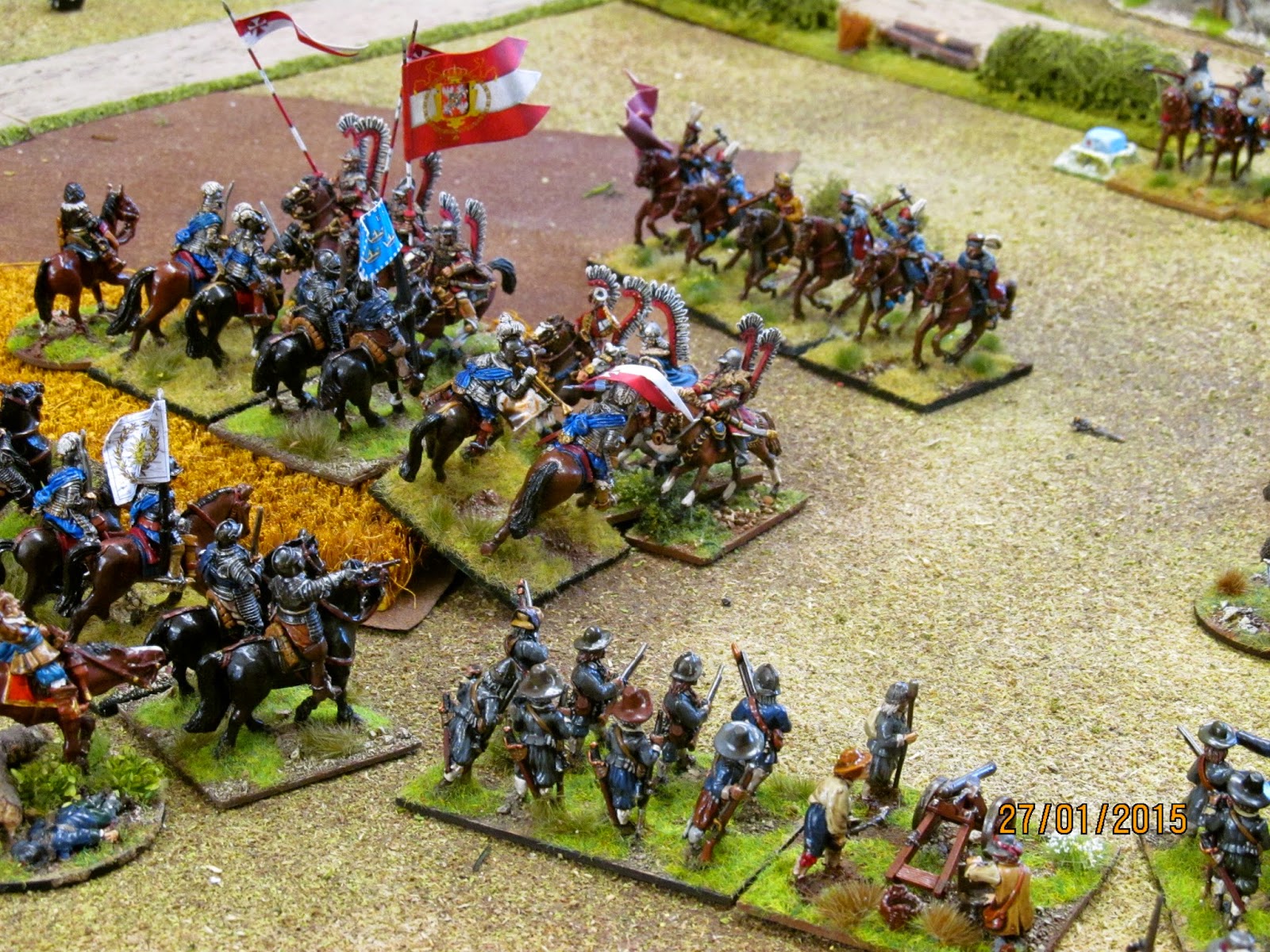 Almost the final act of the battle. The Swedish right wing cavalry have been swept away after a hard fight.  Gustavus led his cuirassier reserve forward, driving off a unit of pancerni before hitting some hussars in the flank. The hussars held and the cuirassiers had to retire shaken. The hussars followed up and hit another unit of cuirassiers, causing them to retire also. The hussars were then exposed to a hailstorm of shot and suffered 11 hits but Paul saved them all! 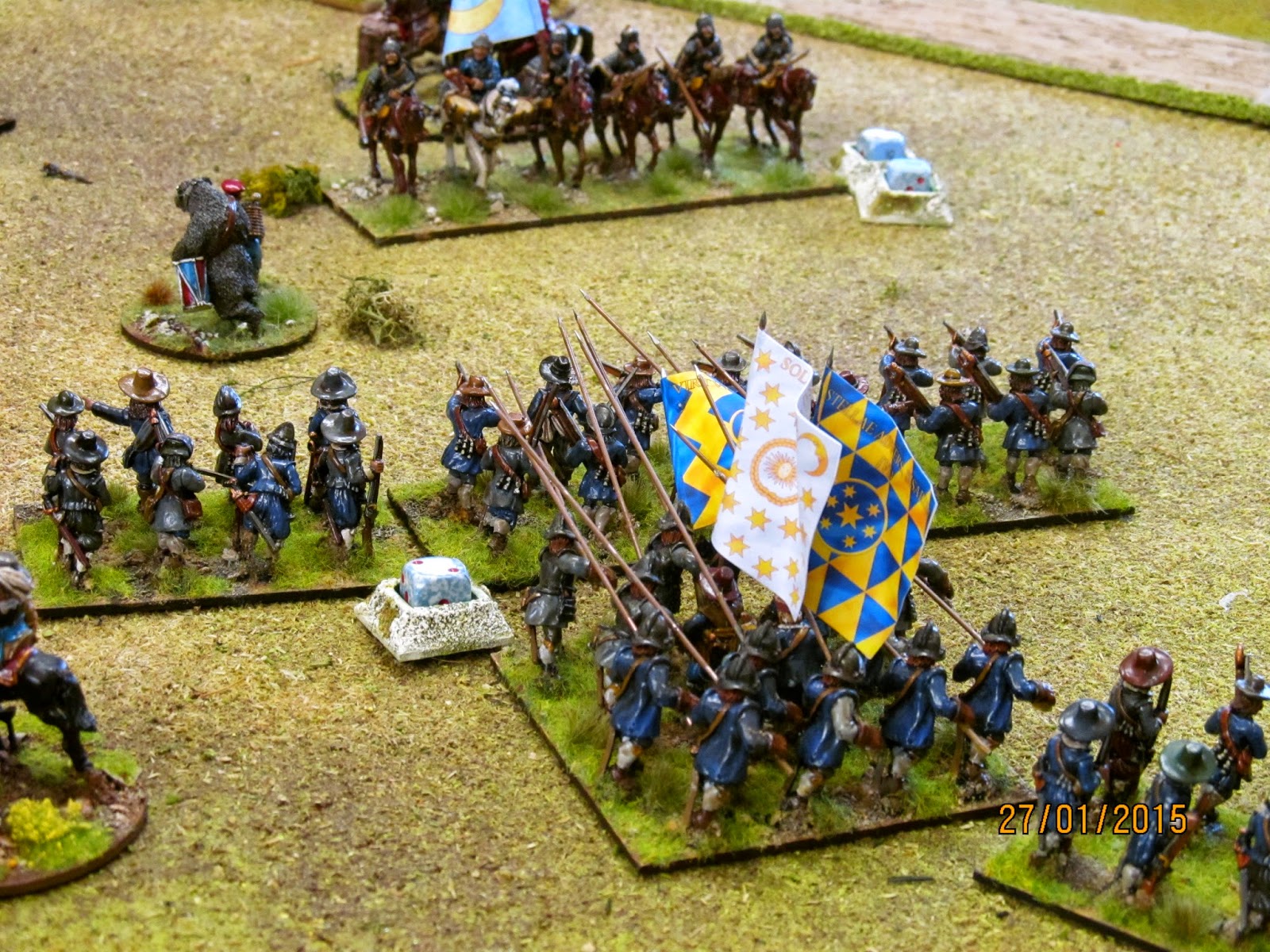 The Swedish Blue regiment faces the Polish left wing, and the dancing bear.

At this point we did a quick reckoning up. The Swedes had lost both their cavalry wings and in the last turn one of their infantry brigades was also broken. The Poles on the other hand had lost their centre and left cavalry 'brigades', so both armies had lost 50% of their commands on the last turn. The Poles held both of the physical objectives but both armies were spent and under the rules both would have to retire as neither was in a fit state to continue. A very minor and temporary victory for the Poles. Those bloody winged hussars!
By Colin Ashton - January 29, 2015