Robbie, John and Paul came up yesterday to refight the next game in my Seven Years War 'journey', the Battle of Leuthen. This was another chance to make use of my roofing felt snow terrain and the first opportunity to put my marvellous Leuthen Church model on the table.

Robbie wanted to be Austrian and I was allowed to be Frederick (there were a couple of events in the scenario that only the Prussians knew about). Paul and John diced for sides; Paul joined me on the Prussian side as von Seydlitz and John was Austrian. I used the scenario as described in Charles S Grant's Wargaming in History Vol 4, but we only played the second part of the battle as I didn't feel like 'rolling' the terrain several times and people had homes to go to. The troops used were largely dictated by what I own, which is lots and was more than enough for the game although I had to use my Saxons and lone Swabian Btn in the role of the Bavarian and Wurtemburg contingents.

All line and the Guard battalions had battalion guns and the heavy artillery was able to move to new positions after the battle commenced, as happened in the actual battle. The ‘Brummers’ were fortress guns. I treated them as heavy artillery but with greater range and they were not permitted to move and fire. All troops except the advance guard and some of Zeithen's cavalry were off the table but would enter on turns 1, 2 and 3. Driesen’s cavalry was off table in the SW corner, lurking in some dead ground to cover the exposed Prussian left flank from any Austrian cavalry attempts to roll them up. They would enter any time after Lucchesi's troops arrived, subject to the usual command rolls.

Infantry not deployed on the table entered from the North behind Leuthen in column of march. The infantry did not have battalion guns attached as in the accounts I have read these were unable to keep up with their units in the scramble to turn south and face the Prussians. For the same reason the Austrians were not well served with field artillery and had a single battery of two models. The Reichsarmee infantry were classed as ‘untested’ as they had just been bundled back a mile by the Prussians about 30 minutes prior to this part of the battle.

This was going to be a very tough one for the Austrians, but despite their inferiority in artillery they outnumbered the Prussians in infantry and were pretty even in numbers if not in quality with the cavalry. 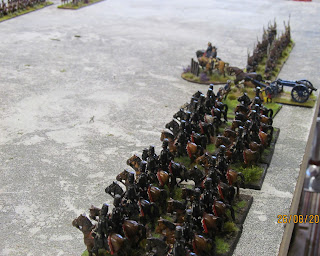 The Prussian advance guard on the table at the start of the game. 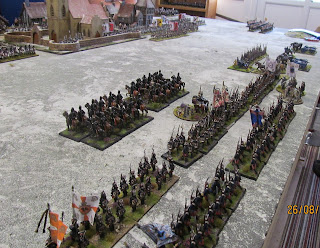 The next move the main line of Prussian infantry arrived, supported by their considerable artillery train. In the far distance Seydlitz's cuirassiers have pushed forward to keep the Reishsarmee battalions on the move. Leuthen church is garrisoned by the Rot Wurtzberg regiment. 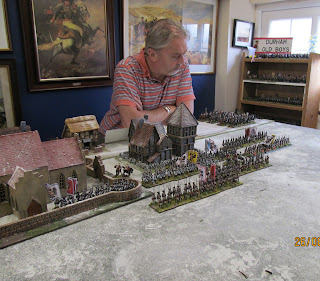 Robbie deciding what to do with Serbollini's cavalry as it enters the table.   The Reichsarmee battalions are slowly pulling back in the face of the Prussian advance. 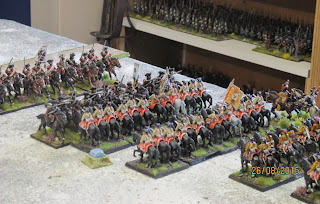 Paul charged Robbie's cuirassiers with his cuirassiers but was defeated. The lead squadron was broken and the following squadron forced to retreat. I put this down to the fact that my Austrians are Front Rank figures and so much chunkier than my venerable RSM Prussians! It suddenly looked like the Prussian left might collapse from the pressure of the Austrian attack but thankfully the line stabilised and the Austrians pulled back as more Prussian cavalry arrived. 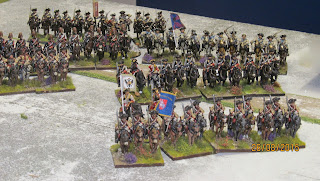 On the Austrian left, Lucchesi's cavalry appeared quite early in the game and made their presence felt very quickly. They got the better of the Prussian von Reusch hussars and almost broke through the disordered IR16 von Dohna, but the latter held and the Austrian cuirassiers had to fall back. 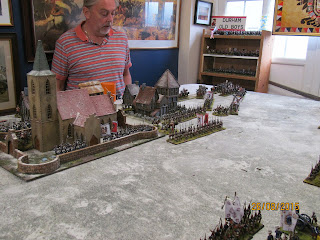 Robbie was still trying to get his Reichsarmee units back. One battalion stood firm to try and slow the Prussians while his cavalry regrouped after getting the better of the Prussians. 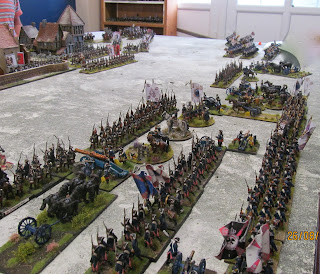 The full weight of the Prussian centre was now moving towards Leuthen, with the artillery rolling forward and causing considerable casualties and disorder, especially to the withdrawing Reichsarmee units. 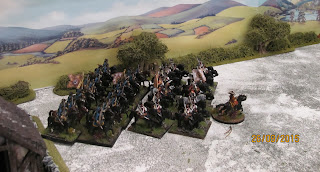 Once Lucchesi's cavalry appeared the Prussians were free to release von Dreisen's hidden cuirassiers and dragoons in an attempt to catch the Austrians in the flank. 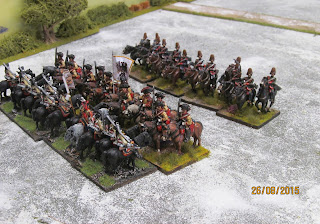 The Austrians were quicker to react than in the real battle and initially got the better of the first clash. 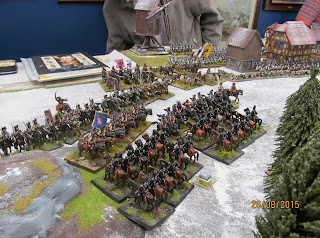 The Prussian hussars were thrown into the path of the advancing Austro/Imperial cavalry to try and hold them. Both units were defeated; one broke and fled while the other withdrew shaken and disordered. 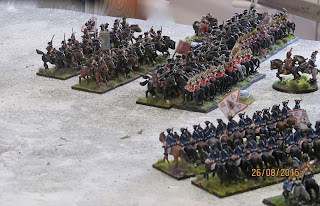 Back on the right Seydlitz's cuirassiers again got the worse of the fight with the Austrians and the brigade was broken and what was left forced to withdraw. Thankfully the reserves of dragoons and hussars were there to plug the gap. 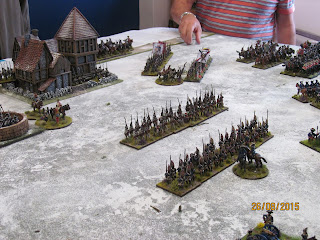 A Saxon grenadier battalion playing the part of the Wurtemburg grenadiers being shot to pieces by Prussian artillery and musket fire. 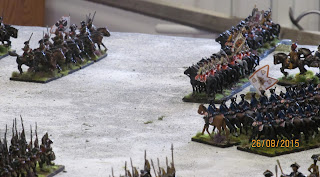 The victorious Austrian dragoons consolidate having driven the Prussian cuirassiers off. Their commander Serbollini was however killed. 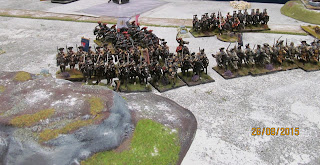 Back on the left flank the Austro/Imperial cavalry are still threatening the Prussian centre and preventing them from advancing. 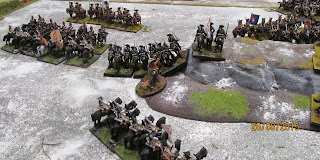 The Prussian cavalry finally start to take the upper hand, but it is painfully slow. 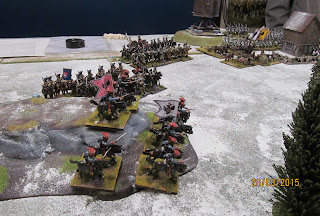 Austrian hussars just before they were hit in the rear. Prussian dragoons had forced one unit of Austrians to retire thus exposing the hussars' rear, which was too tempting a target to ignore. 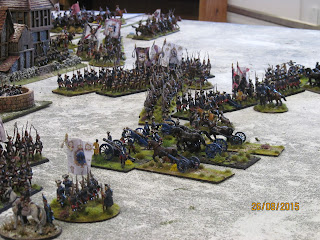 In the centre the Prussian artillery continued to trundle forward, repeating the tactics of Frederick's artillery on the day. The Reichsarmee troops had been pushed back to the outskirts of Leuthen or destroyed. 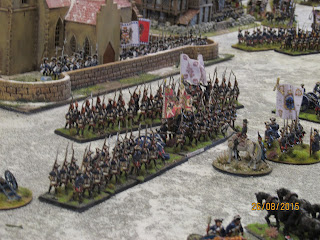 The assault on the church, led fittingly by the Grenadiers of Frederick's guard. The garrison, the Rott Wurtzberg regiment held on valiantly for a few turns but eventually weight of fire forced them to retreat from the walls into the church itself. 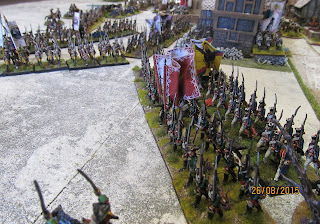 The end of the Reichsarmee (Saxons and Swabians). 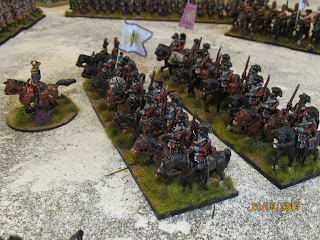 The Austrian Jung Modena dragoons on the Prussian right. Paul had thrown a blunder, resulting in one his units having to charge. The Austrians countercharged, survived riding past Prussian artillery but were soundly defeated in the melee and broken. Paul's accidental charge and subsequent victory meant that the entire Austrian left flank was broken and forced to retreat. 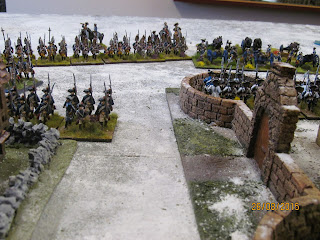 A view from behind the Austrian lines of the Prussians advancing on Leuthen. 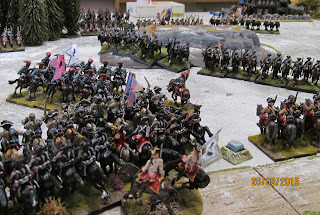 The final cavalry combat on the left saw the Austrian cuirassiers of General Lucchesi broken and forced to retreat. This meant that the Austrians had lost half of their army, i.e. both wings, broken and in full retreat. 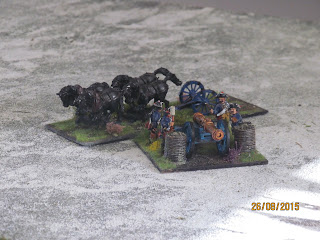 The Prussian 'Brummer' didn't really have much impact on the battle, mainly as I kept masking it's line of sight. It did however manage to take a few long-range pot shots at the Austrian guns and their cavalry, causing a little disorder. 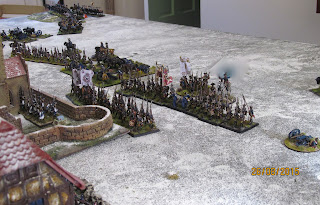 As the battle game to a close the Prussians are poised to capture the churchyard on the heels of the retreating Rott Wurtzberg regiment.

This was a game I was really looking forward to doing, and had done lots of prep including getting the iconic church built as well as the snow terrain. However, whilst it wasn't actually going to be walkover for the Prussians (and it wasn't) it was really tough for the Austrians to win. However, they did very well on both flanks and there were moments, more than one, where I thought they might just pull it off and make it impossible for the Prussian centre to assault the town. The poor Austrians were faced with the Prussian army at its peak (no apologies, it was IMHO bloody good at this time in the war) but the quality will soon start to drop off as the war continues. Black Powder worked really well with the usual tweaks to accommodate the scenario. We got a really big game to a conclusion in about five hours, including stops for tea, lunch and the toilet (we are all of a certain age). The advancing Prussian artillery and the fragility of the Reichsarmee contingent made parts of the game unpleasant for Robbie and John although both did great things with their cavalry. The Prussian victory was really down to them defeating both of the Austrian flanks, thus negating the need to actually assault Leuthen as the centre was left exposed and would be forced to retreat.

Thanks to the guys for coming up for the day. Next time (unless I go off piste for a game or two) it'll be very different as we shall be refighting Zordorff. Better dust my Russians off.