This week's game, the first of the year, was a cracker. On Thursday, Robbie, John and Dave (Jarvis) joined me for a refight of Chotusitz, Frederick the Great's second battle of the War of Austrian Succession or the 1st Silesian War, take your pick. We used the new Honours of War rules, with some suitable amendments to accommodate the differences in troop quality seen between this and the Seven Years War. For example, the Prussian cavalry of 1742 were still 'requiring improvement' to use a term well known to any teachers reading this, and were downgraded to 'standard' while the Austrian cavalry (Cuirassiers and Dragoons) were 'superior'.  Robbie and I took the Austrians (I am becoming quite fond of my Austrian army) while John and Dave happily took the Prussians. The orders of battle for the game were as follows:

The  Prussian cavalry counted as inferior for rallying purposes and the player couldn't elect to prevent a unit from following up a beaten enemy when testing. Prussian cavalry also still had some way to go with their retraining so all changes of formation etc took half a move. Frederick and the main body would arrive on Turn 4 but only on passing a command roll. We used random commander casualty replacement which was to have a significant impact in the game. All infantry except grenadiers had battalion guns.  Austrian cavalry also could not elect not to pursue a beaten enemy when testing and although the Austrian infantry were much improved since Mollwitz they were no match for the Prussians in terms of rate of fire so would always get a -1 when shooting.

I won't go into much detail about the lead up to the battle. For a detailed account I can recommend
http://obscurebattles.blogspot.co.uk/2013/03/chotusitz-1742_30.html

Suffice to say that the Austrians caught the Prussians napping, and were in a position to overwhelm and crush the Prussian rearguard under Anhalt-Dessau before Frederick could bring the main body of the Prussian army into play. History tells us that they nearly did it but were unable to exploit their position and quit the field in the face of the Prussian main body. So how did our version play out? 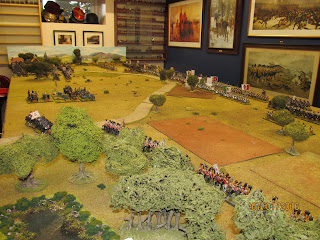 The battlefield from behind the Prussian right flank. The entire Austrian army facing just three Prussian battalions and all their cavalry. 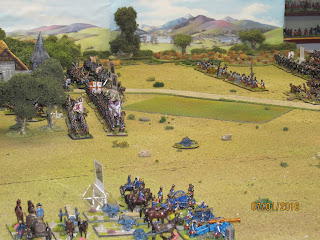 The Prussian left wing and centre, with their annoying heavy artillery battery in the foreground. 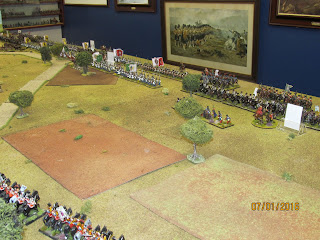 The Austrian centre and some of their left wing cavalry before they began their advance. 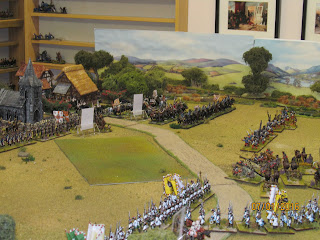 The Austrian centre begin to advance while their artillery began to soften up the Prussians in front of Chotusitz. 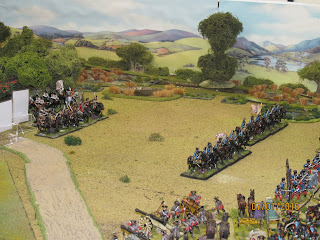 On the Austrian right Prussian dragoons forced the Croats to evade, but were unable to catch up with them. In the meantime the remainder of their left wing cavalry is deploying out of Chotusitz. 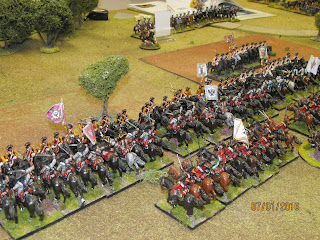 On the Austrian left the cavalry of both armies soon came to grips in a massive melee. The honours went to the superior Austrians, who over the course of the first three turns managed to break or drive back the entire Prussian force with the exception of a sole cuirassier regiment which was left rallying on the Prussian baseline. 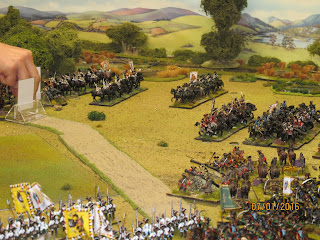 The Austrians had similar but less spectacular or speedy success on the right wing in dealing with their Prussian opponents, loosing a number of units before the Prussians were crushed. 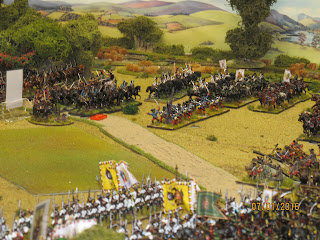 The Austrian right slowly pushing the Prussians back. 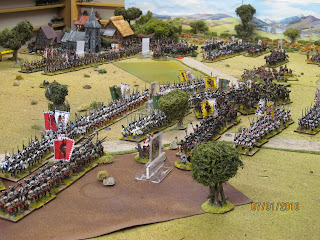 In the centre the Austrians were slowly advancing (too slowly as it happens) towards the outnumbered Prussians. Robbie's hussars are being positioned to exploit any gaps in the Prussian line while the Austrian reserve line move to the left. 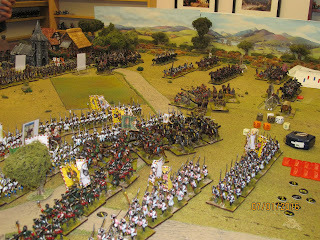 The Austrians were then struck a decisive blow as General Daun, commanding the front rank of the attacking forces was struck down by a musket ball. One of the best aspects of the rules are those around command and control, and your brigadiers really need to be up there with their men in order to keep things moving. This also brings with it risks, in the form of the odd errant musket or cannon ball. Any general within command radius (15cm) of a unit that has taken casualties must test to see if they are hit. A throw of 11 or 12 on 2D6 (thrown by the enemy) and they are knocked on the head. In the rules the 'commander' comes back the following turn but with one less level of ability than their predecessor, e.g. a 'Dependable' commander would return as a 'Dithering' one. 'Dithering' is bad, very bad. I changed the rule so that the ability of the replacement is decided randomly as per the appropriate national characteristic table. In the Austrian case, on a throw of a 1 or 2 they are 'Dithering', 3-5 they are 'Dependable' and 6 means they are 'Dashing'. Dashing is a very good thing for a commander. Robbie threw a 2 so Daun's replacement was 'Dithering'. This meant that in the command phase it was possible for orders to go astray etc which would result in the entire command not moving at all. This happened 3 times to Robbie (he threw three 1's in successive turns) so effectively the Austrian assault ground to a halt. 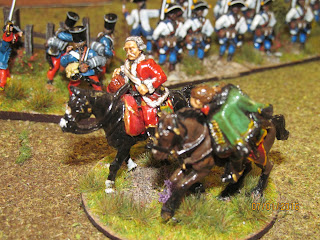 Once the ability of Daun's replacement was known the army became quite dispirited as the photo above shows. 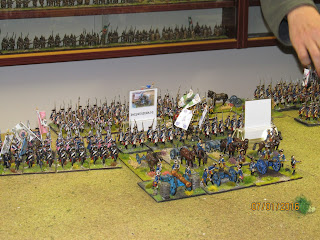 At the same time as Daun met his maker the reserves under Fred arrived. Eight battalions of nasty Prussians, with two 6pdrs, right in the centre and behind their heavy battery which had been proving to be a thorn in the side of the Austrians. At the start of the battle this battery of 24pdrs and 12pdrs had been rather isolated and provided a fragile link between the troops in Chotusitz and the cavalry on the Prussian right. Could be budge it? No. Advancing towards them proved to be futile as several hundred Austrian and Hungarian soldiers could attest to. 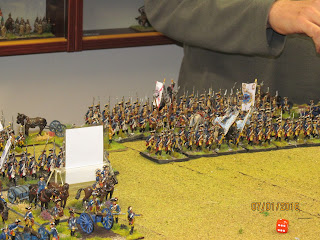 The Prussian Guard of IR15 lead the advance in the centre. On the Austrian left, I was still mopping up the remainder of the Prussian cavalry. The regiment shown actually became done for in the process of shattering their opponents, and most of my cavalry on this flank were carrying one or two casualty points. 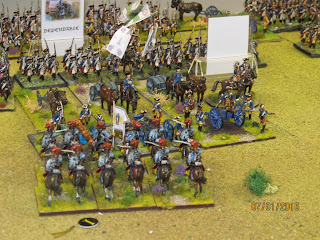 In desperation my favourite Hussar regiment (the Palatinal Hussars made up of venerable Hinchliffe one piece castings) charged the Prussian battery. They were unsuccessful and routed (they always run away) but at least the guns didn't fire at our infantry that turn. 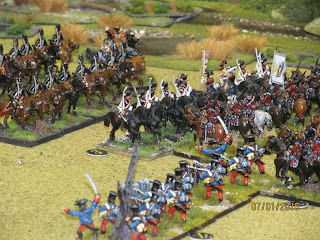 The cavalry fight continues on the Austrian right. The Prussians are being slowly ground down but at not insignificant cost to Robbie's Austrians. 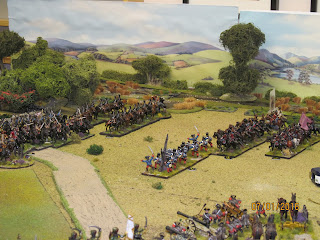 The following turn it was going to be the von Reusch Hussars turn to feel the edge of Austrian steel. To the left are the Prussian Garde du Corps, busy rallying for not the first time. 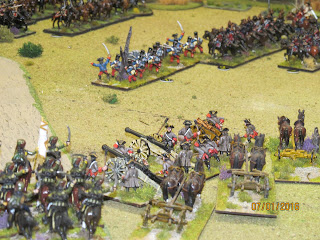 The Austrian artillery proved to be overwhelmingly ineffective although I suppose they did pin down the Prussians in and around Chotusitz and gradually wore them down, but too gradually. 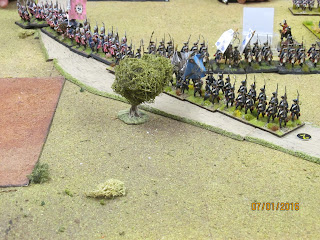 John's reserve brigade swung round to cover the flank of the main Prussian line from any interference from my Austrian cavalry, who were in no fit state to even contemplate any frontal charges against formed infantry. 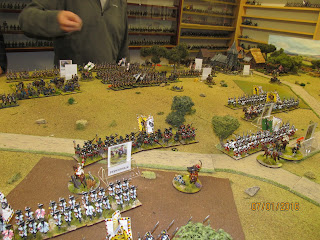 The Austrian centre dissolving before the Prussian counter attack. 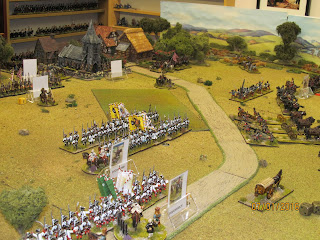 The Austrian centre, what's left of it. 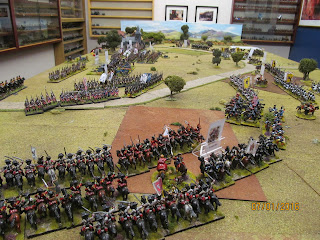 The battlefield from the Austrian left. Massed cavalry impotently facing the Prussian infantry, a very large hole in the Austrian centre, then in the background the remains of Robbie's victorious right wing cavalry. 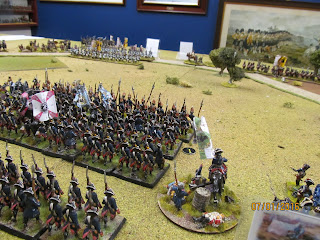 The Prussian centre faces where the Austrian centre had been! 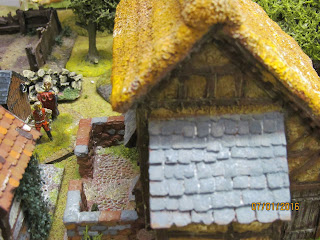 The battle over, a Prussian general officer retires to the loo to contemplate the battle.

Well, game over and what a cracker! It was definitely a game of two halves and defeat snatched from the jaws of victory (which seems to be an Austrian habit these days!). The game presented some challenges for both sides, the main Prussian one being to hang on until Frederick and the main body arrived. This they did. Command and control is for me an important aspect of any war-game. In the 'old days' the  all-seeing eye of godlike commanders was the norm but I like the uncertainty of not knowing if my troops will do what I ask of them, for whatever reason. When Daun was replaced by a 'Ditherer' everything went pear-shaped for we Austrians, as our advance and opportunity to close with   and overwhelm the few Prussians in the centre before their main body arrived went down the pan when order after order failed to get through, and the strength of the Austrian centre was literally blown away by Prussian musketry and that damned artillery battery. 'C'est la guerre'

The rules worked really well and I think we are all warming to them as the ruleset of choice for mid-18th century games. Players need to think and make careful decisions to avoid squandering their troops. I'm certainly looking forward to two weeks time when we shall be having another go at Kolin, using these instead of Black Powder.

We agreed that the result was a hard-fought winning draw to the Prussians as the Austrians would have to abandon the field. In terms of scores on my league table this means that its one point each as the Prussians did no better than on that day in 1742.