I had hoped to be hosting a game today but circumstances, and my inability to stand up straight this morning, contrived to kick that idea into touch, probably until next week.

In the meantime, I managed to finish off a fews bits and pieces that were cluttering up my workbench and had overflowed to Katherine's half of our shared study/studio. That was a mistake. Yesterday she suggested I might like some help in tidying up, and by the end of the day all the boxes of unpainted figures had been sorted and stored off the floor. I do have loads of stuff but now its sorted out its not at all a daunting prospect of getting it finished, one day, or bunging some of it on eBay. We also made some more room in the Man Cave by adopting a tidier approach to storing my collection. Read into that what you will........

Here are some pictures of the random terrain items that have been finished so far this weekend. 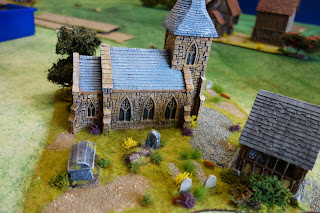 Readers will have seen that I've taken to putting some of my buildings on bases (Thanks David!). It looks quite good and does help when troops are occupying a built up area as the boundaries for measuring are clear. This is my it old church, repainted and now surrounded by an assortment of graves. I decided not to put a permanent wall around it as it could prove a bit of a limitation. 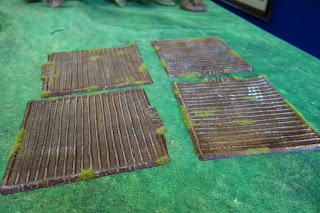 Four rubber fields from Early War Miniatures. I have some of their roads and tracks as well, in the pile of things to do. 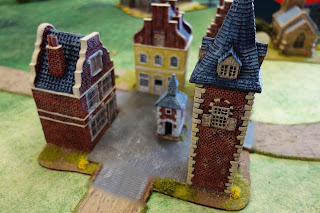 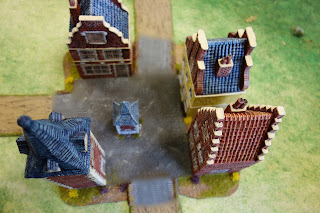 The two above are of my 'town square' piece. They're all Hovels buildings with an Early War Miniatures town square. The bits of road branching off to link with the main roads are just strips of EWMs rubber cobbled streets which are not glued down, allowing for a bit of variety. Its a bit heavy but I like the end result. I plan to use this to represent the town of Burkersdorf in a refight of the battle of Soor (aka Burkersdorf) at the AMG gathering scheduled for June. 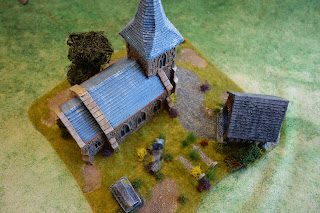 An aerial view of the church and churchyard.

No figures finished so far this weekend but theres a chance I might get a Saxon SYW 12pdr and limber team completed as well as a French gun and crew for 1672. We shall see.
By Colin Ashton - May 02, 2016