Whetting the appetite for 'Versailles' on TV next week

This week's game was last week's postponed game if that makes any sense. I wanted to get one more 1672-78 game in before having to focus on the 18th century again in preparation for the Battle of Soor 1745 refight Robbie and I  are doing at the AMG16 weekend of 11/12 June. Robbie, John and Paul joined me for the game, it being Paul's first encounter with Impetus Baroque.

The armies were the same as in the last two games, as I've not managed to finish any new units. John and I were the Dutch/Spanish while Robbie and Paul took the French. 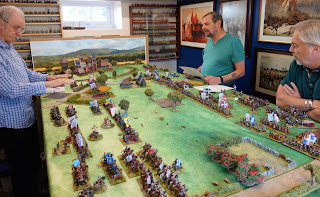 The armies face each other across the table. 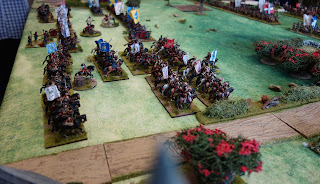 The majority of the Dutch horse were concentrated on the right flank. 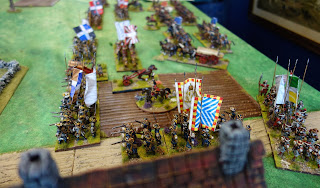 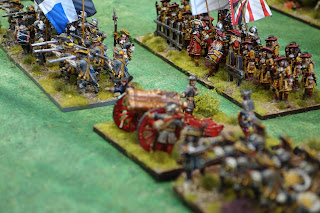 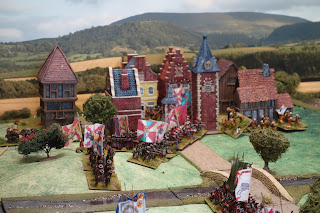 John's Spanish occupied the town on our far left. 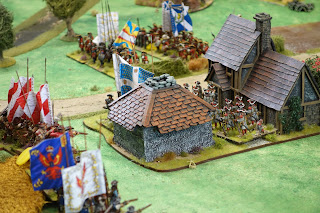 Paul's French and Swiss guard advance and occupy the Forge, supported by a Scots battalion. During the course of the battle, the Swiss guard were routed, the French guard were forced to retire and the Scots beat a hasty retreat! 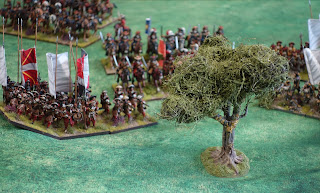 The French left advance slowly, supported by several squadrons of rather timid horse. 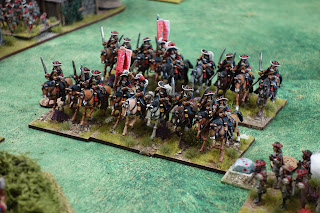 Paul's French Maison du Roi about to punch a hole through the Dutch centre! 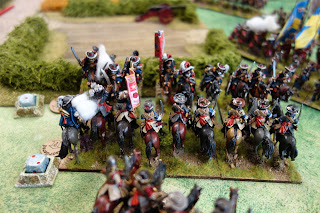 The Maison du Roi overran a Dutch battery, drove off one squadron of Dutch horse but were finally halted by a second squadron.

More Maison du Roi and Grenadiers a Cheval crash into a Dutch (Brandenberg) battalion. The infantry failed to stop the charge with their closing fire and were pushed back and broken. 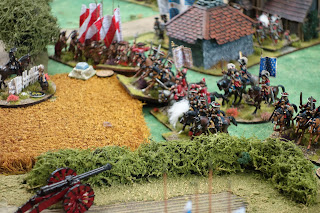 Despite having a rather large hole in our line, the French were unable to exploit it as their horse were a spent force and the immediate danger passed as they withdrew. 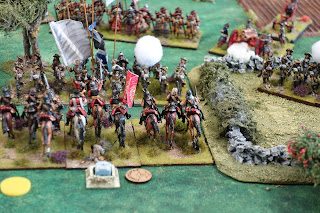 On our right I finally decided to get my cavalry into action after having softened up the French foot a little with musketry and cannon fire. My cuirassiers were exposed to flanking fire as they charged home successfully. 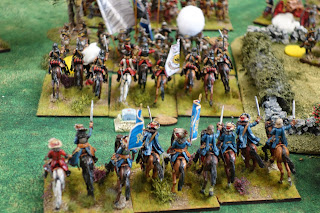 The first squadron of cuirassiers drove the French back but chose to withdraw, allowing the supporting squadron to charge and again push back their target onto their supporting Swiss battalion. The Dutch Horseguards are poised ready to exploit any sudden collapse of the French. Sadly it came close but never materialised. 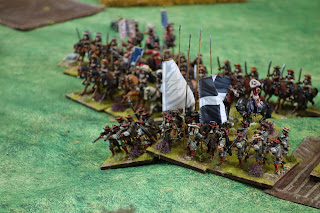 The Maison du Roi (whats left of it) sheltering behind the Piedmont regiment. 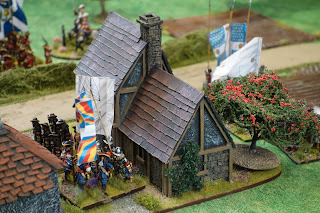 At the Forge, the Gardes Francais have been forced out and their place taken by a Swiss battalion. 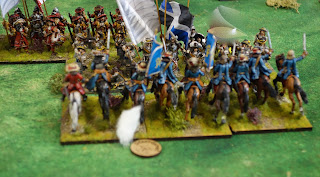 The Dutch Horseguards crash into the battered Regiment d'Auvergne. 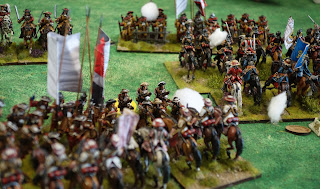 More Dutch horse pile into the wavering French centre, but its too late as the constant charges by wave after wave of Dutch Horse has failed to burst through the French line. I felt a bit like Marshall Ney! 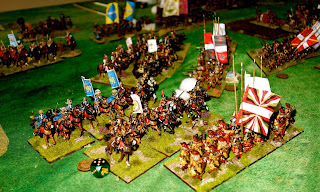 Imperial cuirassiers in the final onslaught against the French left are unable to close with their target. 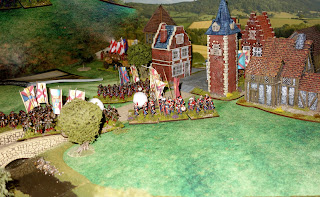 The Spanish held the town throughout the battle without any serious loss or inconvenience, although their dragoons lost the skirmishing against their more numerous French counterparts. 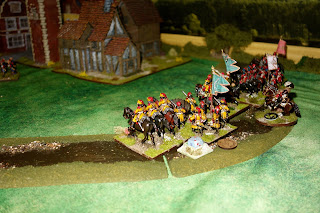 The two companies of French dragoons were not inclined to exploit their success over the Spanish dragoons and remained on the river bank for the remainder of the battle. 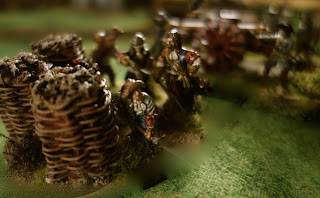 D'Artagnon commanding the main French battery at sunset. The guns failed to hit anything throughout the entire game.

Again, it was an excellent game and I have really taken to the rules. I think we're all getting the hang of them as well. We declared the game a draw as both armies had taken a pounding for little tactical gain. As usual, many of our plans and amazing battle-winning moves were foiled by poor dice rolls. In fact, we might have done better as the Dutch if I had actually formulated a plan of any kind and communicated it to John before the battle! As it was the game had several missed opportunities for the Dutch/Spanish alliance, namely my failure to advance quickly enough in the centre, my sluggish moves with my horse on the right, and John not realising he could have swung around the weak French right wing, overwhelming the dragoons and artillery with his resplendently dressed five battalions of infantry.

Oh well. Super game and John and I are planning another one this coming week.