Evening the odds...well a little bit. Not much really.

This weekend I've been finishing off a few more bits and pieces for my 'Het Rampjar', the French-Dutch War 1672-78, collection. In an attempt to balance the appearance of four allied Germans regiments for the Dutch earlier in the week I finished basing this French unit, the Regiment Conde. I could hardly have an army led by the great man himself without his own regiment being present. 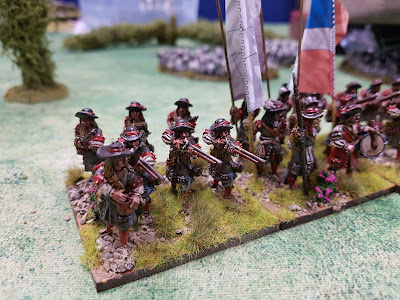 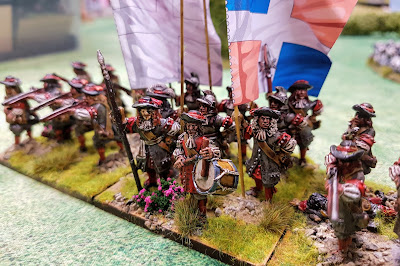 At each end of the line I have placed a grenadier figure. Thats so we don't forget to give this unit and similar ones (mostly French) the advantage in the rules of having 'grenadiers present'. It might make all the difference when attacking a built up area or defences. Or it might not of course...

Below is a really yucky yellow regiment of Hanoverian or Celle (ist?) cuirassiers. I forget which but I had them in the box and now they're in barracks (a different box) waiting for their baptism of fire. The annoying thing about Copplestone's Glory of the Sun range is the separate scabbards and carbines. Actually thats not the annoying bit. It's loosing them God knows where, as they went INTO the box with them but in the passing of time they have vanished! Grrr. 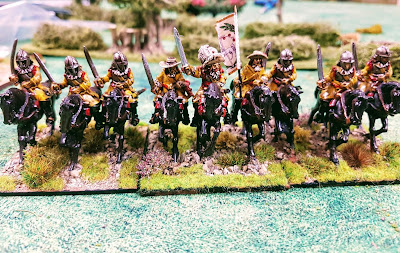 I now just have half a dozen limbers and teams, four or is it six cannon of various sizes, the crews, several wagons plus tabletop ephemera to finish, and I am well on with the cannon, gunners and limbers. There's also enough figures for another regiment of French horse if I want plus another battalion of as yet unallocated infantry.

This evening I also noticed I was out of tufts. Quelle horreur!
By Colin Ashton - November 12, 2017