The War of the Two Brothers. The Portuguese Civil War 1828-34 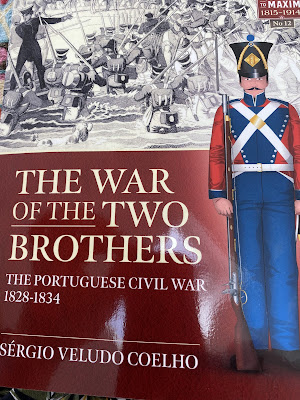 The latest book in Helion and Co’s ‘Musket to Maxim’ series is this rather splendid and colourful volume covering the little known (for most non-Portuguese readers at any rate) on the bloody civil war that erupted in Portugal in the second quarter of the nineteenth century. ‘The War Between Two Brothers, the Portuguese Civil War 1828-34’ provides us with an excellent account of the civil war, fought on one side by the liberal D. Pedro de Braganca, the former Emperor of the newly independent Brazil, and his brother the absolute monarchist Miguel I.

The introduction sets the scene for the war, describing a bloody tale of political skullduggery, overt power grabs by the conservatives, failed uprisings, mass repression and reprisals, the preparations on both sides and the assembly and transportation of the Liberal army which, after defeating a Miguelette invasion, invaded the country from its base in the Azores, landing in Oporto in July 1832.

The Liberals attracted a great many foreign adventures who fought alongside Portuguese loyal to Pedro, including a large contingent of British and French, together with German, Polish, Italian and Belgian volunteers, which gave Pedro’s army a very cosmopolitan mix. The first part of the book gives us a very thorough breakdown, by regiment, of both the Liberal and Miguelette armies. For each we get details of the uniforms, weapons and organisation of the infantry, cavalry, artillery and support services. Not surprisingly the British influence was still very apparent after the Napoleonic Wars. The second section is especially interesting as it give a detailed timeline of the course of the war, an approach I rather like as it makes a change to having to Wade through the sometimes leaden prose often found in books of this genre. The main battles on land and sea are all covered and broken down in some detail with orders of battle and several handy maps.

The centre of the book is fantastic, and provides us with 22 pages packed with loads of glorious colour illustrations of the uniforms of both sides, including foreign contingents, and I did like the rather naive chocolate-box toy soldier style used and found it very engaging. It also felt right for this particular subject. These colour plates accompany a ‘liberal’ amount of contemporary black and white illustrations and a good number of useful maps.

Overall, I can highly recommend this book and found it to be a fascinating and informative study, albeit at entry-level I guess (NOT a bad thing), of a momentous period of Portuguese history, but it’s pitched just right I believe to attract the interest of casual readers as well as those more up to speed with the events of the nineteenth century Iberian Peninsula, and uniform information is a gold mine for any wargamers considering another project. (NOT ME).