In the wilds of Wallachia. The Battle of Rymnik, 22 September 1789

Details of the battle are hard to come by so the terrain and armies were pretty conjectural (i.e. guesswork). My French Revolutionary Wars Russians and Austrians were used to oppose my mid-to-late seventeenth century Ottomans who stood in as their great great grandchildren for this battle.  So, button counters look away now, 'cos the figures were not really right, the terrain was based on a couple of old images of the battle, google maps and a brief description, but as a game it would (and did) work very well. A brief account of the real battle can be found here.

There was a full house as there were eight players this week, so to avoid my head exploding due to using a more complex and unfamiliar for some set we used the ever popular with the right mindset Black Powder 2 with my own house rules, which essentially just switch the turn sequence so shooting comes before commanded moves, which as I've said before actually improves the dynamics of the game. Paul, Dave and Mike were the Russo-Austrians, with John joining later in the morning with their as it turned out much-needed reinforcements, and Neil, Conrad, Shaun and Nigel were the Ottomans. The Russians and Austrians were hampered by some below average commanders (apart from Suvorov of course) which was seriously hamper their movement. 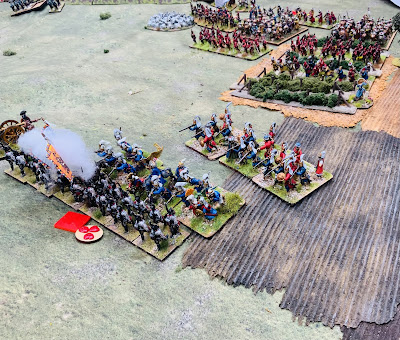 The Ottoman left continued its advance straight towards the Austrians who were struggling to hold the janissaries back. 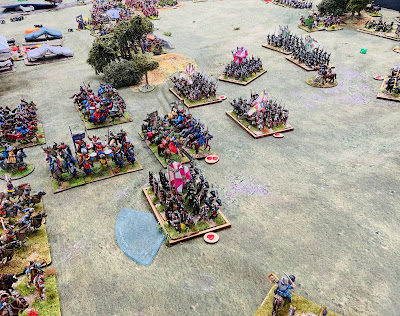 Meanwhile the pinned Russian infantry squares were being worn down slowly. It might have been around now that I reminded the Russian players about my not so subtle hints in favour of divisional squares rather than lots of piddling battalion ones. 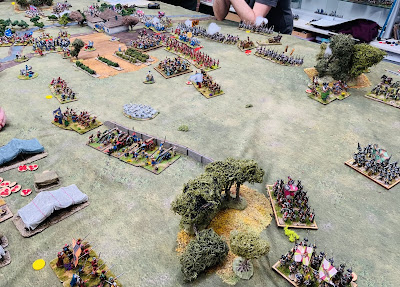 A general view of the situation in the centre towards the end of the game.
Well. That was immense fun and an incredibly colourful game, certainly from where I was sitting/standing. The Ottomans managed a slim victory over the allies on the basis that their right wing had shattered but not yet broken Paul's Russians but with the loss of pretty much all their cavalry the allies were in a difficult spot. The crumbling centre held by the Austrians was certain a cause for concern as I doubt they'd have held for another turn.  The Ottoman left had been pushed back but it was still in reasonable shape. The Russians were tough, as seen on the other flank, but I doubt they'd have succeeded. So the Ottomans did much better than in the original battle, which wasn't that difficult if you've read the account.
Eight players guided, fed and watered by yours truly played the game to a conclusion in less than five hours (less at least half an hour for lunch) and there must have been almost 70 units on the table, so no mean feat. I don't plan to expand my Ottoman army to make it more appropriate for the later end of the eighteenth century; the seventeenth century figures will haver to do and whoever not?
No game next week but there will be 30 October I hope.