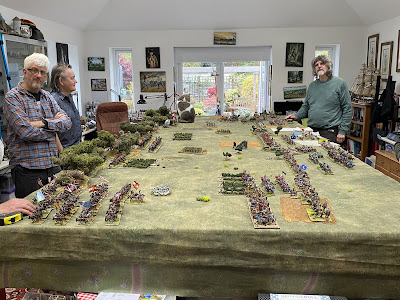 So wrote King Jan III Sobieski of Poland in his letter to the Pope after the siege of Vienna was lifted with the defeat of the Ottomans at the battle of Khalenberg on 12 September 1683. The last game here at the Burrow on Saturday was an attempted recreation of this important victory which saved Christendom from the Turk. This wasn’t the first time I’d run this game but in the intervening four or so years I’d acquired lots more Ottomans, a few more Poles and several squadrons of Imperial Cuirassier types. I had been planning to do this game as a demo at the Battleground show in Stockton on 20 November but I’d been forced to withdraw due to my spinal problems and the chronic pain this gives me in the realisation, much to my wife’s relief, that I really can’t expect to run a massive demo game when I can barely walk. The practice/rehearsal game was all set up at home and the guys were coming round so battle was joined. 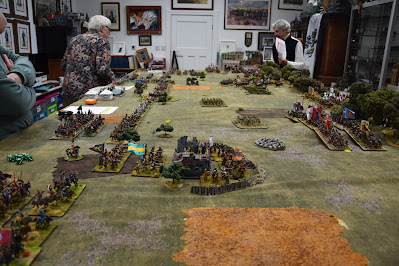 Conrad, Neil and Richard were the forces of Christendom while Paul, Mike and I were the dastardly, er no, dashing Turks. The Christian army had spent the best part of the last 48 hours moving into position through the Vienna Woods, a vast thickly wooded area riven with steep ravines, meeting little opposition, until they emerged looking down onto the Ottoman camp and the siege lines surrounding Vienna. The battlefield was covered in vineyards and mostly burnt down small villages and hamlets, some of which had been fortified, and the main camp was protected by a long earthwork called the ‘Turkenkranz’. The photos are more or less in order but I can neither guarantee that, nor claim that it makes much difference anyway. Just enjoy the spectacle!

Amazingly they only bounced and the cuirassiers were  already shaken so couldn't follow up.
a right Bertie Basset of Austrians, Brandenburgers, Saxons, Hanoverians et al! 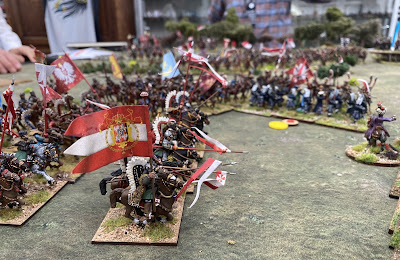 The shots below are out of sequence but I've left them in just to add to the spectacle of what was an excellent game, 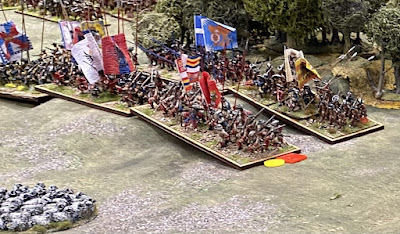 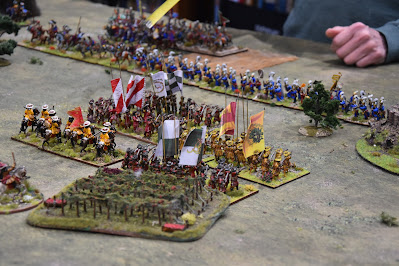 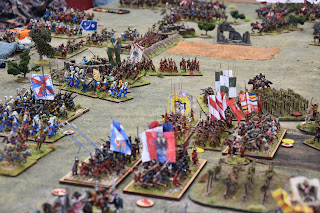 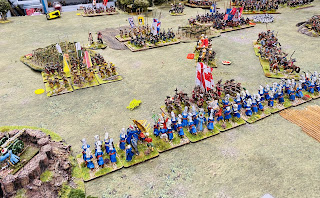 So, by 3:30 it was all over. The allies had lost their centre and their left was going nowhere, but the Ottoman left had been comprehensively steamrollered by the Poles, who were poised to roll up our flank, which they would have managed to do easily enough.....maybe?  The Ottomans were by no means destroyed but were declared the marginal losers of the battle. Much like the real affair, it wasn't a crushing allied victory but Vienna was saved his time as well. Last time we fought the battle the allies were less successful.
The game was a tremendous spectacle and I was able to field Poles, Ottomans and my late seventeenth century armies. Everyone had a great game, although historically I reckon the Ottoman commanders will all have an appointment with a bow string while our collars size is checked!
I reckon the Polish hussars were too effective, even though I'd made them not quite as tough as in the 'Pike and Shot' book. Of course we were using Black Powder with my own stats and amendments (so more like Pike and Powder, or Black Shotte). Maybe I need to buy some more pancerni or reduce the number of hussars? Nah!